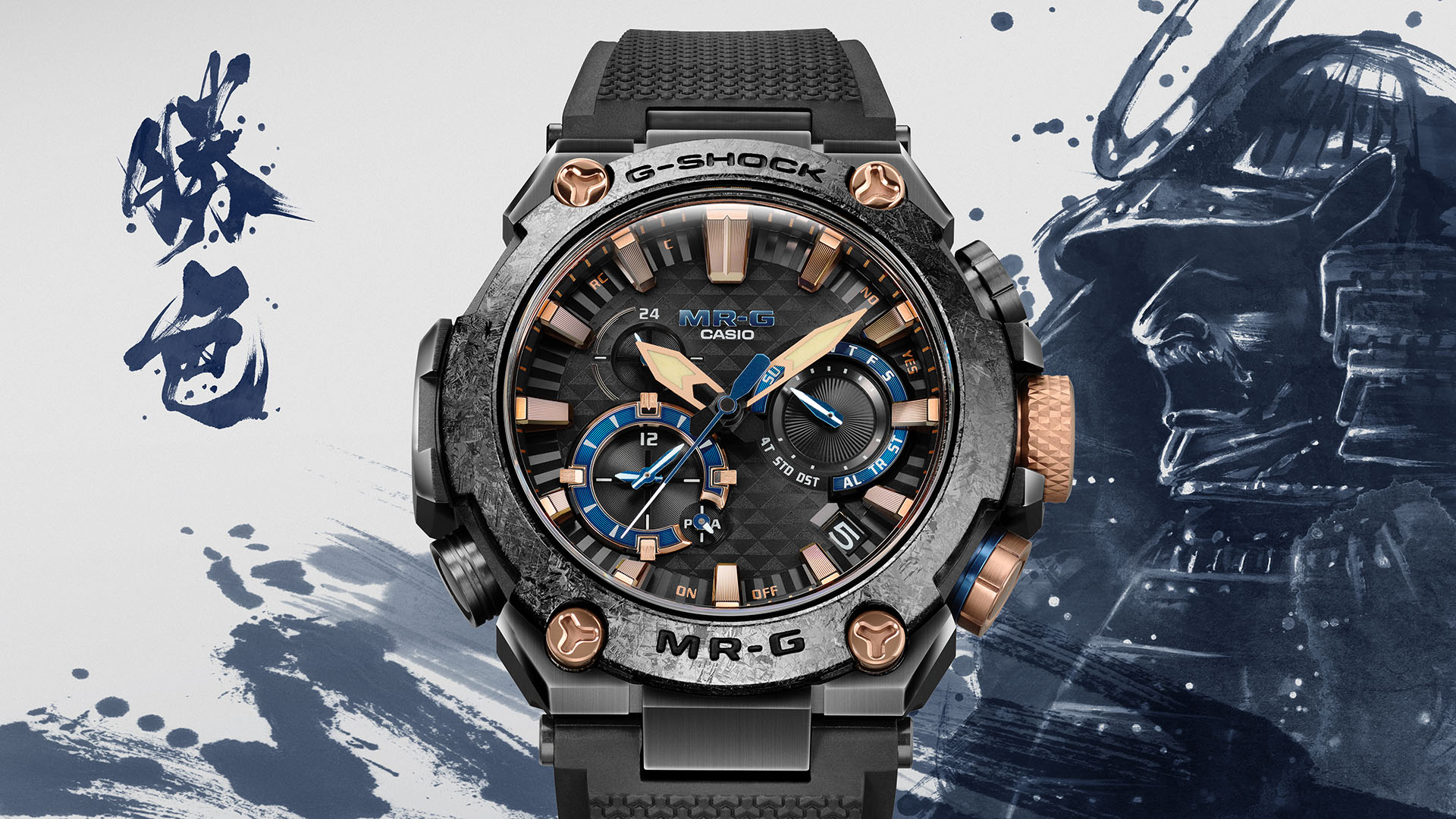 Within the extensive stable of Casio’s rugged G-Shock line, the luxurious MR-G series occupies the very top of the hierarchy. MR-G often combines the best of Casio’s quartz and connected technology with world-class finishing and design inspired by Japanese culture, and for the line’s first release of 2021 the brand continues this trend. For these models, the inspiration is kachi-iro, a deep navy blue pigment that has been the color of victory in Japan for centuries and was often used as decoration on traditional samurai armor. The limited edition Casio G-Shock MR-G MRGB2000B-1A and Casio G-Shock MR-G MRGB2000R-1A combine this traditional color with unique materials, a variety of finishing patterns, and a dazzling array of features for a striking, unorthodox, and durable take on luxury watchmaking.

Both the Casio G-Shock MR-G MRGB2000B-1A and the MR-G MRGB2000R1-A begin with the hefty angular integrated case of the MRGB2000 series in black DLC-coated titanium, treated with a deep layer hardening process. Measuring in at 49.8mm wide and 16.9mm thick, this case should undoubtedly be no shrinking violet on the wrist. However, a combination of case geometry, finishing, and short integrated lugs will likely keep this feeling wearable. While both models share the same base design, each variant distinguishes itself with unique finishing and colors. The MRGB2000B-1A adds splashes of bright yellow gold tone DLC to the bezel screws, crown and 4 o’clock pusher, creating a vibrant contrast with the deep blue kachi-iro accents. For the MRGB2000R-1A, the brand swaps yellow gold DLC for a more subdued rose gold tone, while replacing the bezel with a unique heat treated variant in recrystallized titanium. The recrystallized look is striking in initial images, with a chaotic black pattern halfway between carbon composite and cracked ice. Like all G-Shock models, both the MRGB2000B-1A and the MRGB2000R-1A offer a solid 200 meters of water resistance and unparalleled shock resistance. 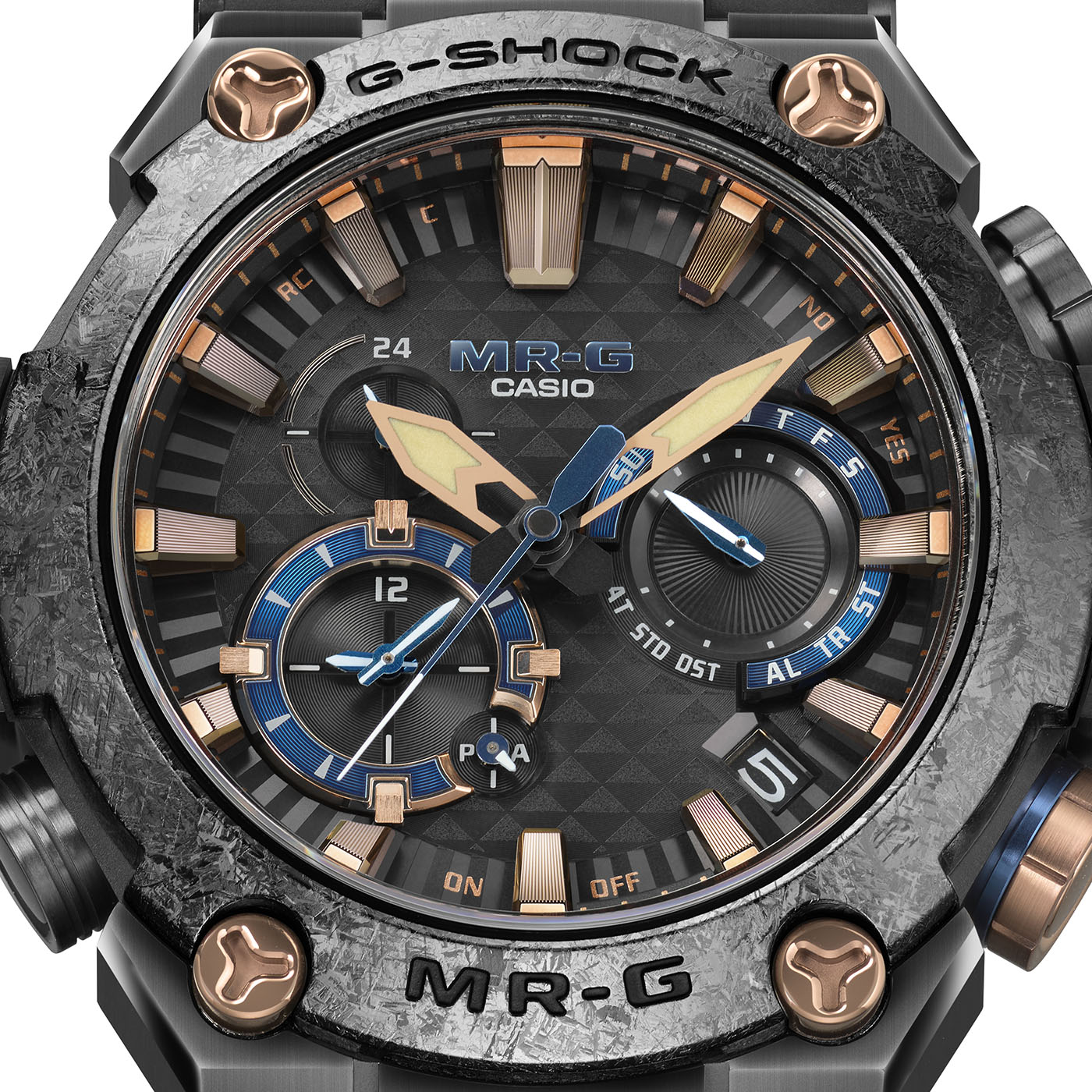 Like the cases, the dials of the Casio G-Shock MR-G MRGB2000B-1A and G-Shock MR-G MRGB2000R1-A are nearly identical, with only differences in color separating them. The dial design itself is packed with traditional Japanese motifs, deftly woven together with the high tech ultramodern MR-G aesthetic. The main black dial surface is finished with an alternating triangular pattern known as uroko, or fish scale, that appears in Japanese art and craftsmanship dating back centuries. The outer ring offers a more dramatic ridged texture inspired by the folding pattern of Japanese fans. Even the ridged applied indices add a touch of traditional Japanese flair, with a slight concave form emulating the curve of a katana. The signature kachi-iro blue is used liberally here, accenting the subdials, 12 o’clock logo, and central seconds hand, accented by either yellow or rose gold DLC hardware depending on the model. 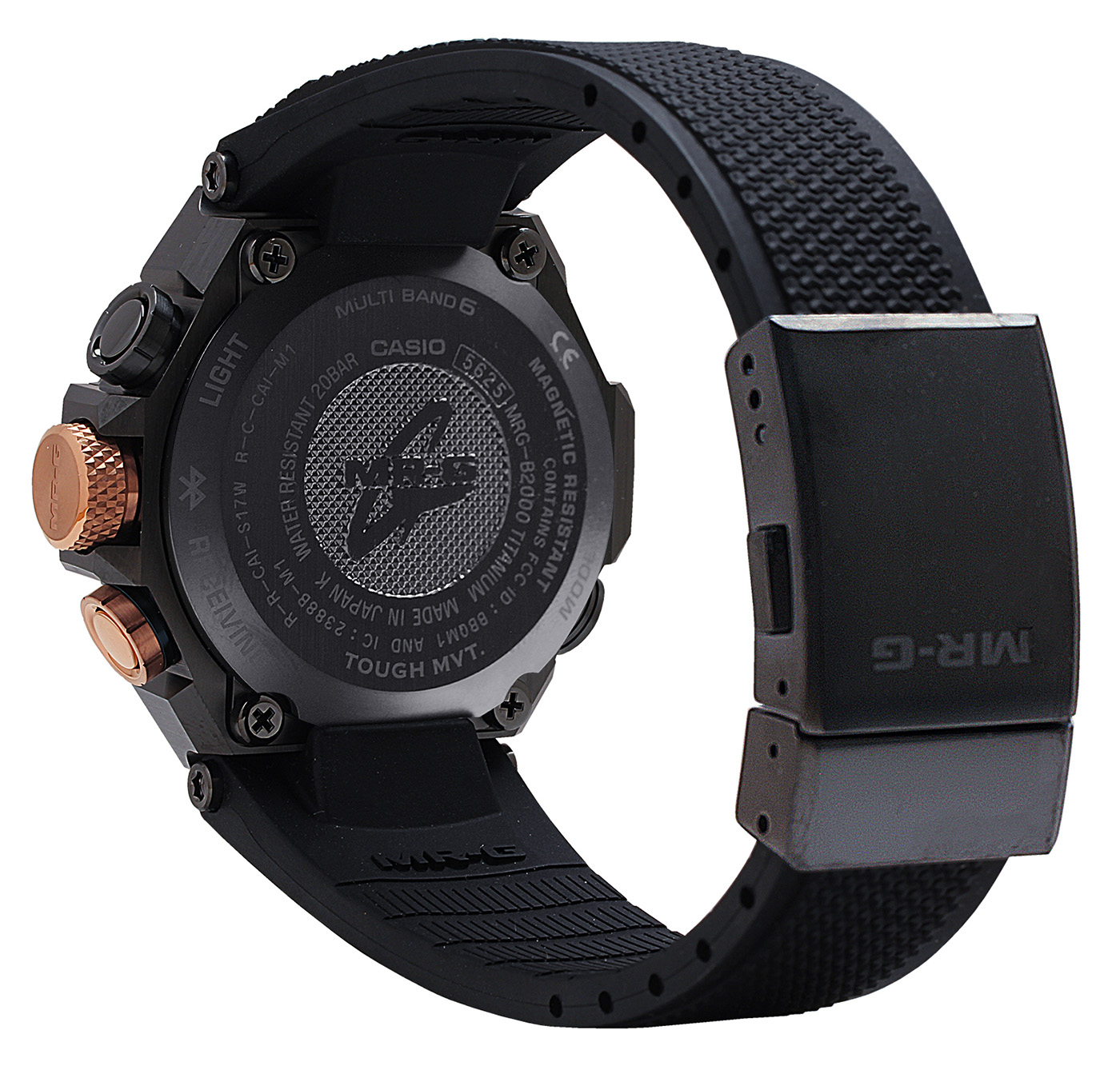 Casio powers both the G-Shock MR-G MRGB2000B-1A and MR-G MRGB2000R-1A with its in-house 5652 quartz movement. Like many G-Shock models, the 5652 offers an intensive array of complications, including Casio’s Tough Solar charging system, radio controlled time synchronization six times per day, a second time zone, a 24 hour chronograph, a 24 hour countdown timer, one daily alarm, and a fully automatic perpetual calendar accurate through the year 2099. With Bluetooth connectivity through the brand’s exclusive MR-G app, nearly every function can be monitored and adjusted through a mobile device. The 5652 also offers a battery life of up to 26 months after a full solar charge. 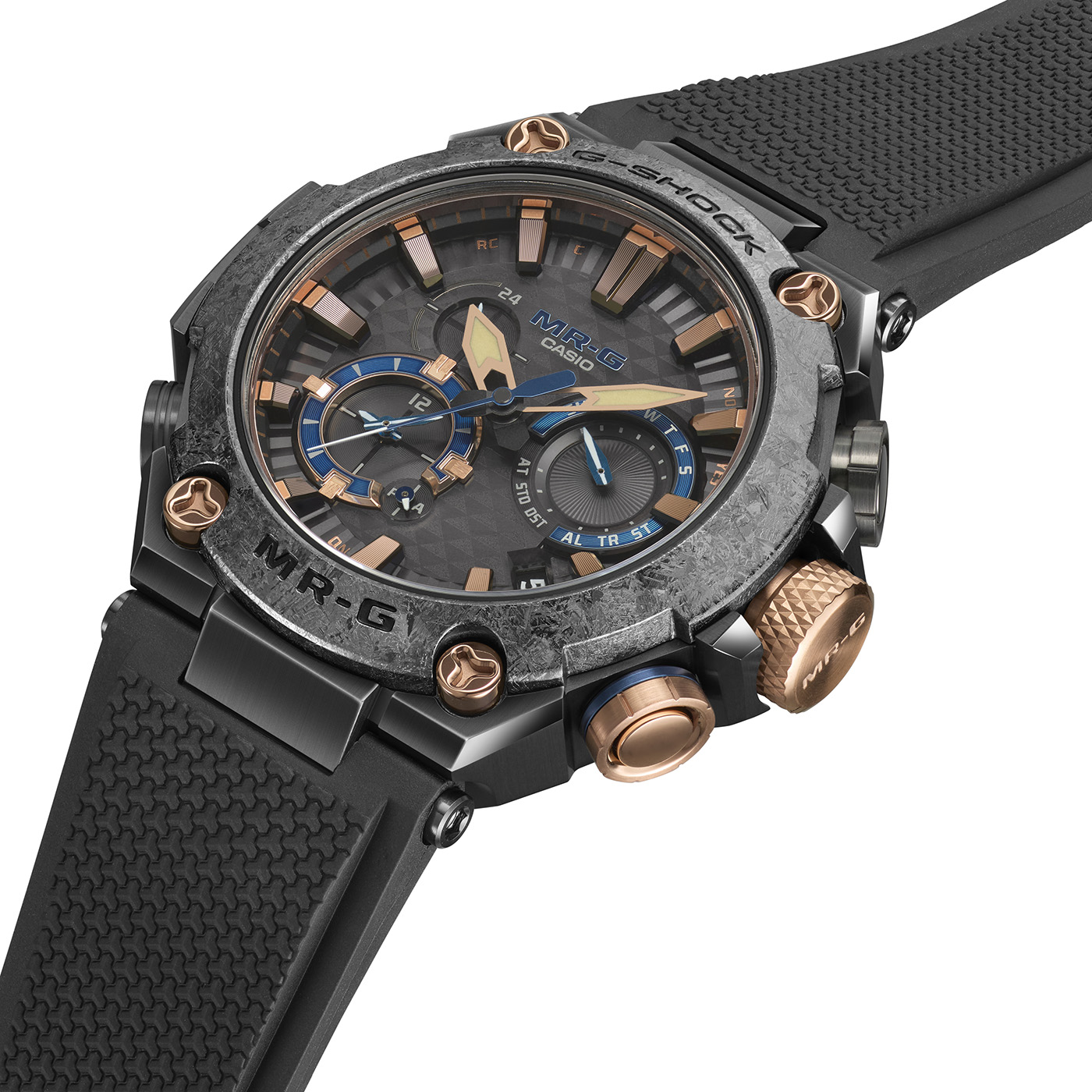 Each variant in this limited edition series is paired with a unique strap choice. For the MR-G MRGB2000B-1A, Casio uses a black DLC coated version of the integrated three link titanium bracelet seen on other MRGB2000 models for a clean and unified look. The MRGB2000R-1A, on the other hand, opts for an integrated fluorine rubber strap in black with one last subtle nod to traditional Japanese motifs. The raised central section of this strap features the iconic Bishamon tortoise shell pattern, reinforcing the link to samurai aesthetics while adding a punch of unique texture in initial images. 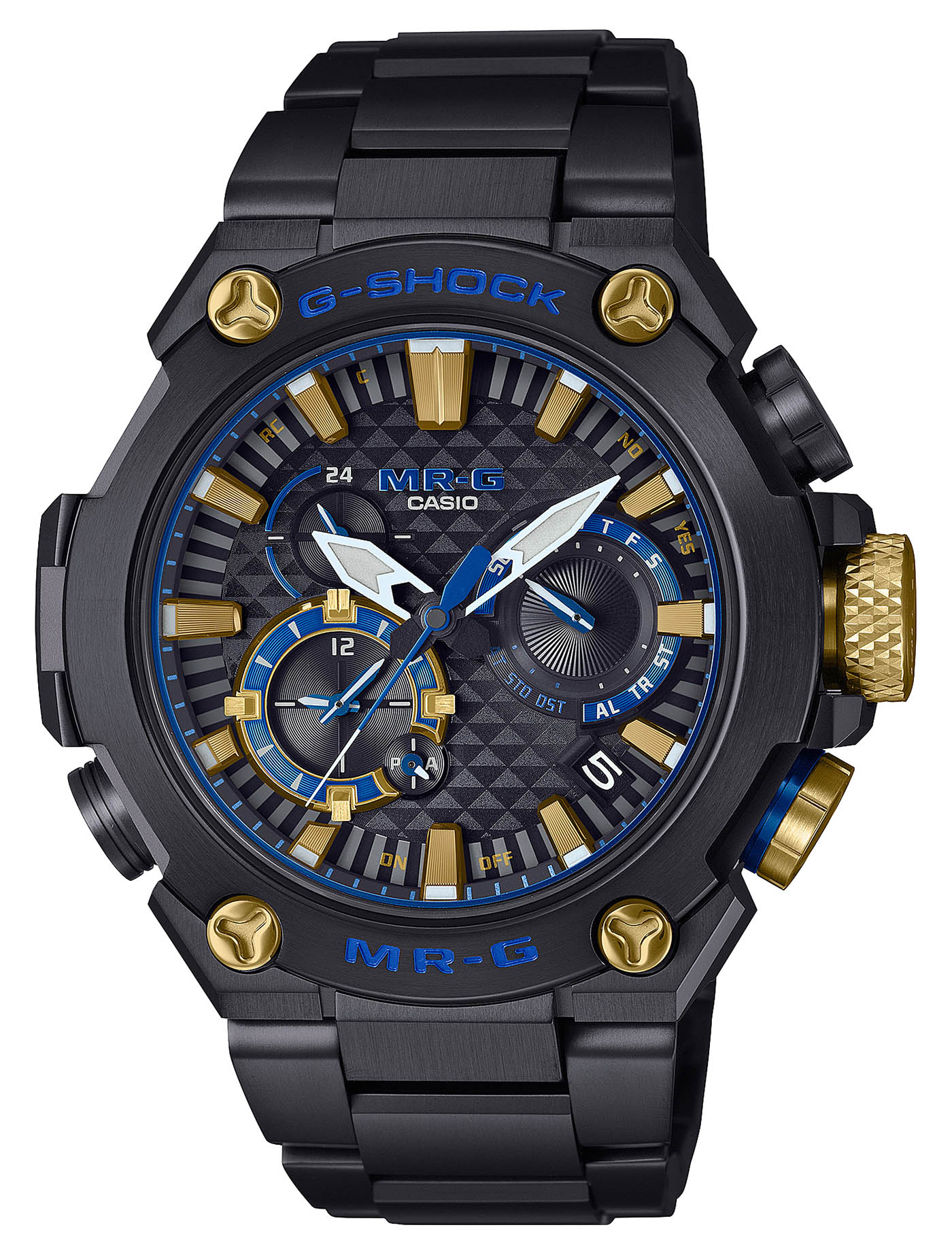