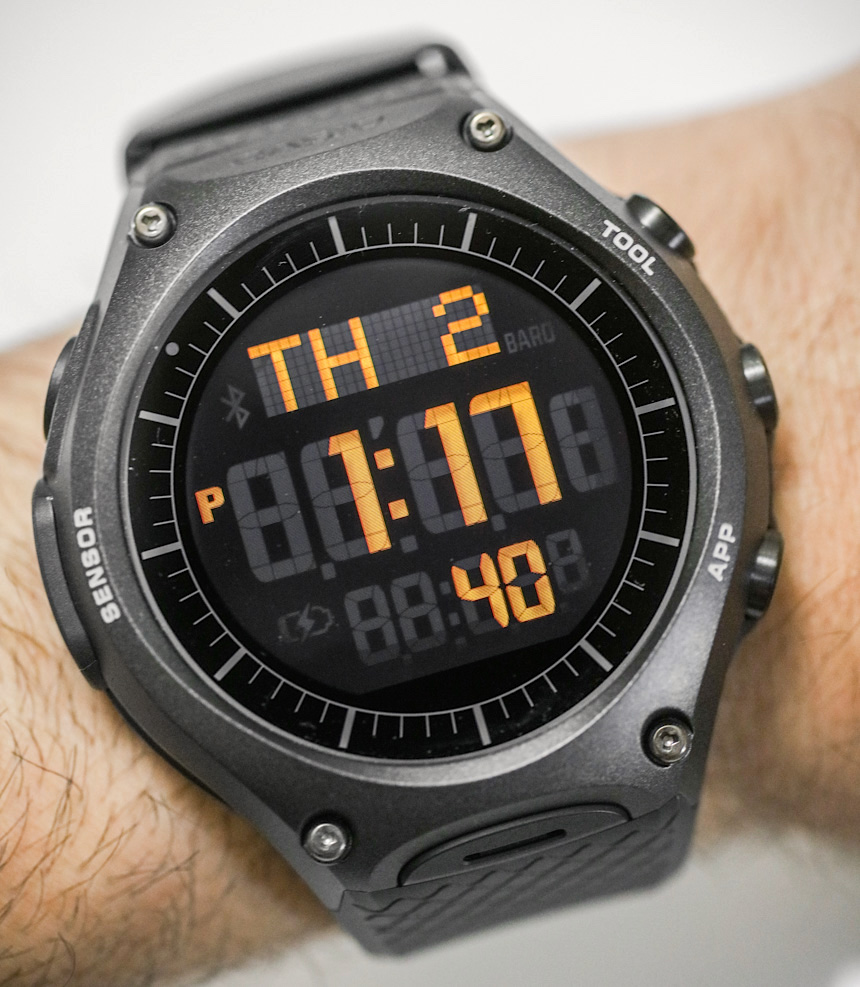 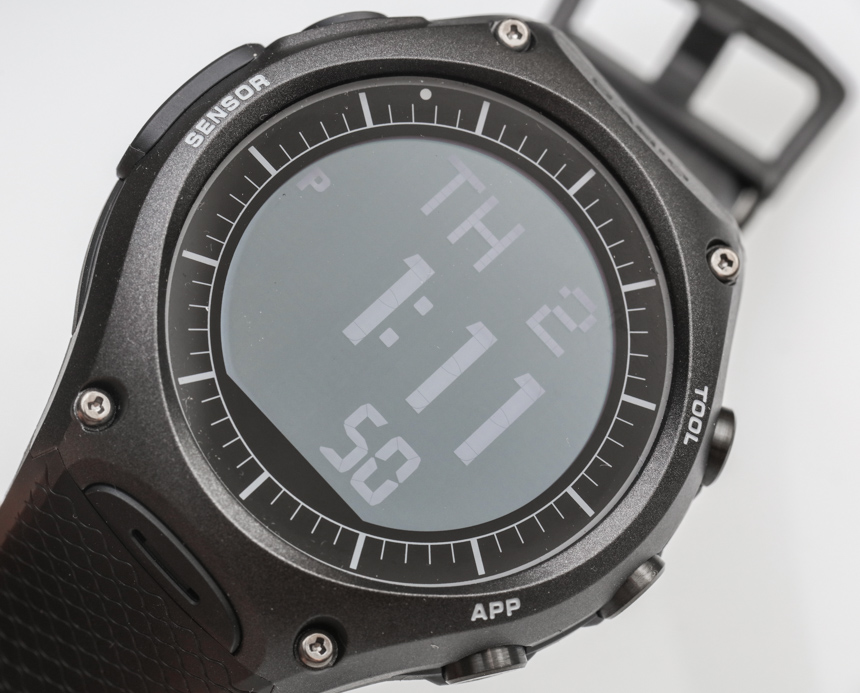 Casio employs a dual LCD screen technology which means that the Casio WSD-F10 has an always-on screen (which can be disabled, of course, to save more power) that indicates the time and date at all times. I don’t say this lightly, but the watch would not be nearly as interesting to me without this added layer of functionality. This isn’t the only Android Wear smartwatch to use this tech, but Casio does it very well. I first experienced this when looking at the more expensive TAG Heuer Connected Android Wear smartwatch here. 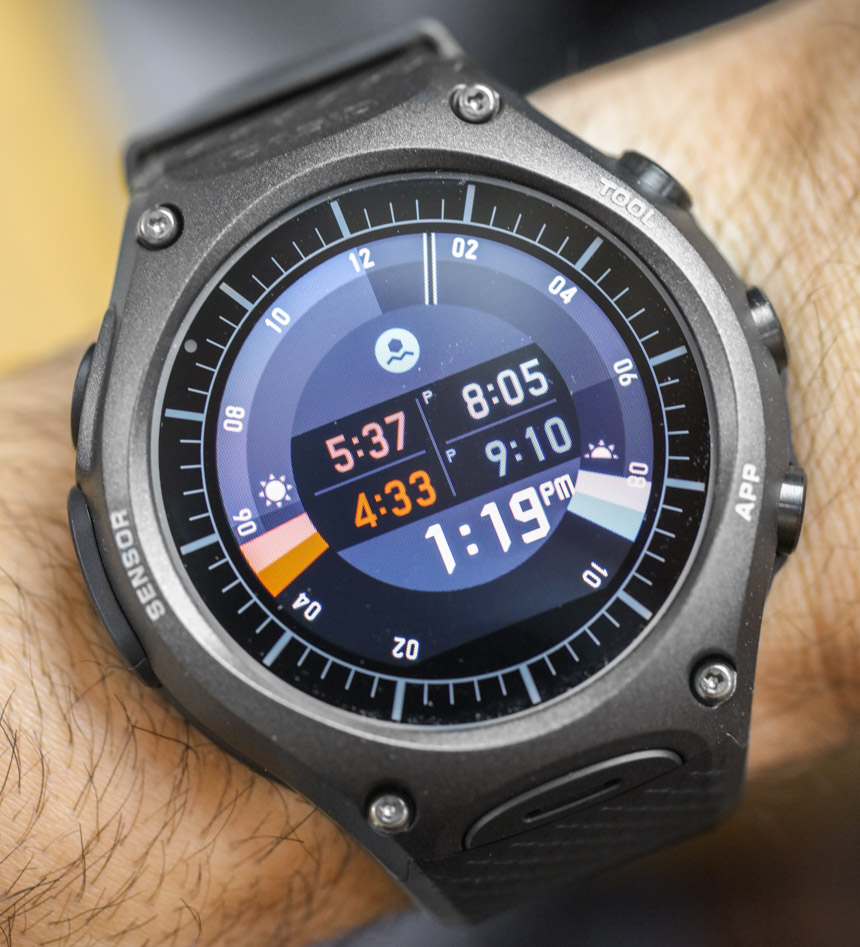 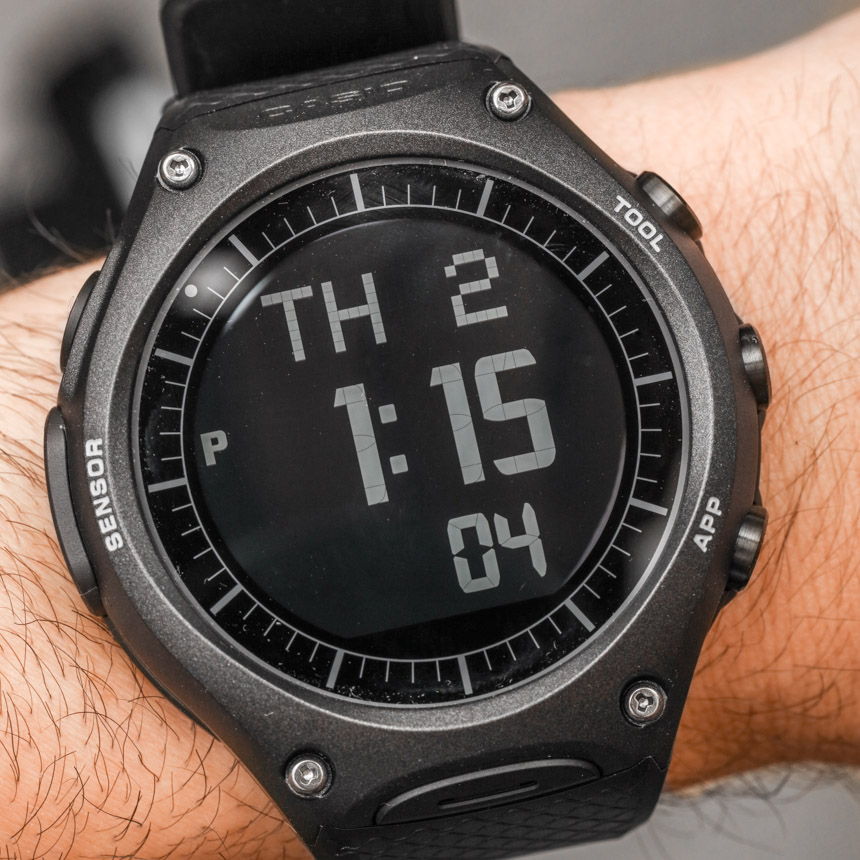 While I love my Apple Watch, I have to say that I dislike looking at a blank watch dial as it makes the device lack soul. The Apple Watch comes alive nicely when you are using it, but it and other smartwatches that do not have an always-on state option will be vestiges of the past before long, in my opinion. The future of smartwatches – as simple as it might seem – is in them having always-on states where you can read information on the dial at all times whether or not the main screen is on. Once you get to experience this, you’ll not likely want to go back. 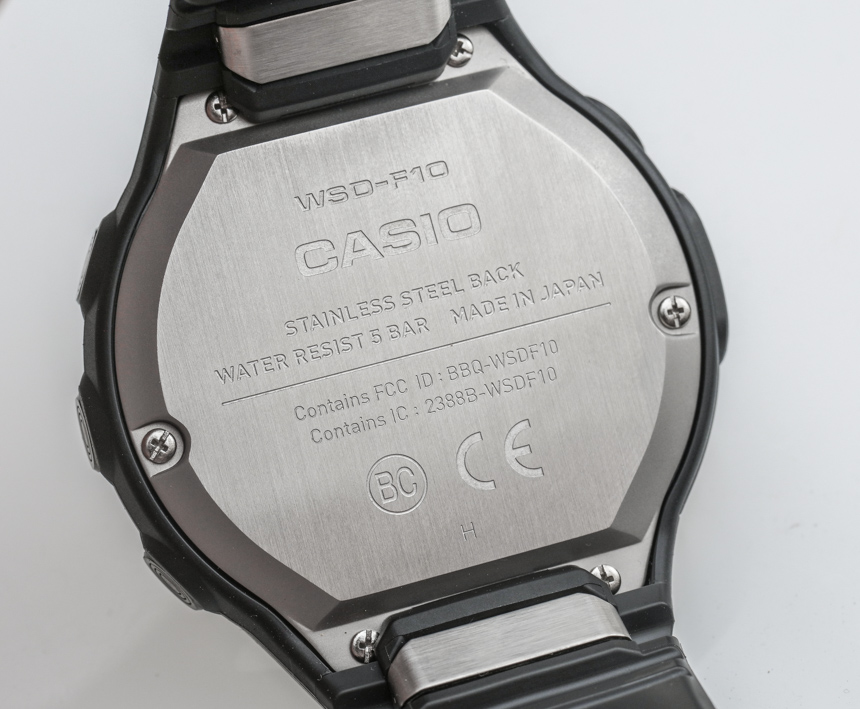 Casio doesn’t seem to let you adjust the look of the always-on state screen, which is a shame. I say this because, for me, one of the most enjoyable things to do with a smartwatch is regularly change the dials. I feel that the value a lot of major brands such as Casio bring to the smartwatch space is their years of experience designing attractive and functional watch dials. The Casio WSD-F10 comes pre-loaded with stock Android Wear watch faces as well as a few of their own which most people will prefer. There are moderate levels of color and functionality customization in the screens, but I personally thirst for more. I would gladly even pay extra for well-designed new watch faces, and I want them to come with even more personalization options aside from a small handful of color choices. If you are going to offer a watch dial that allows for customization, then go for broke. 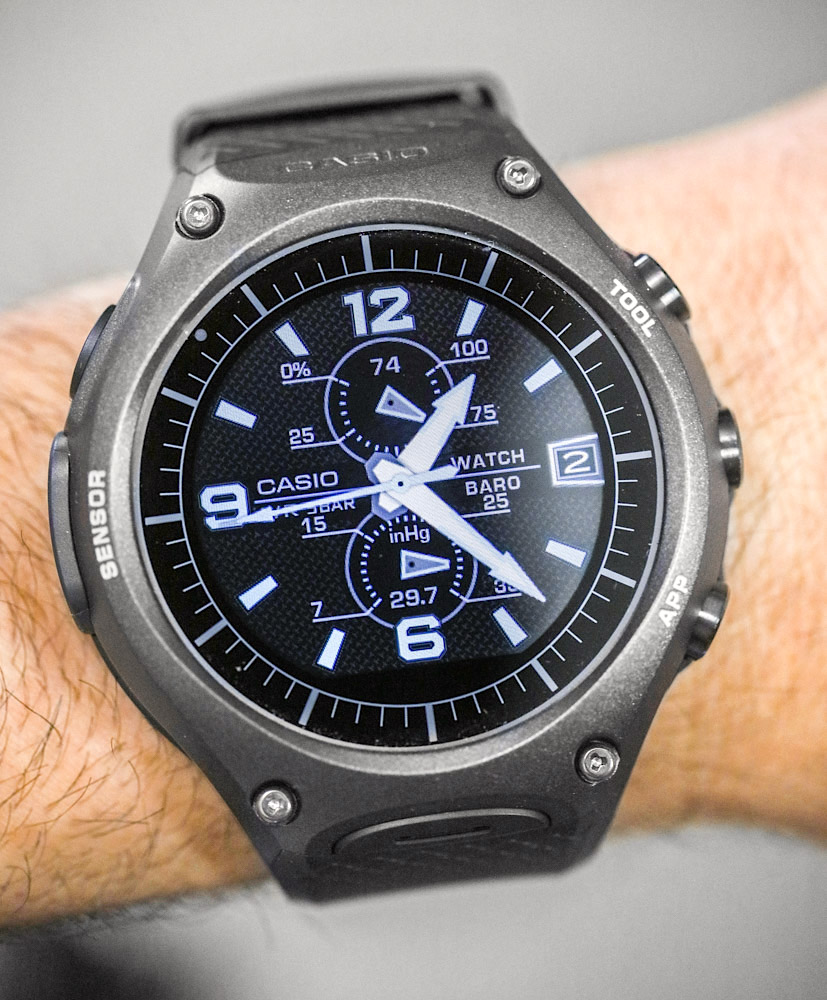 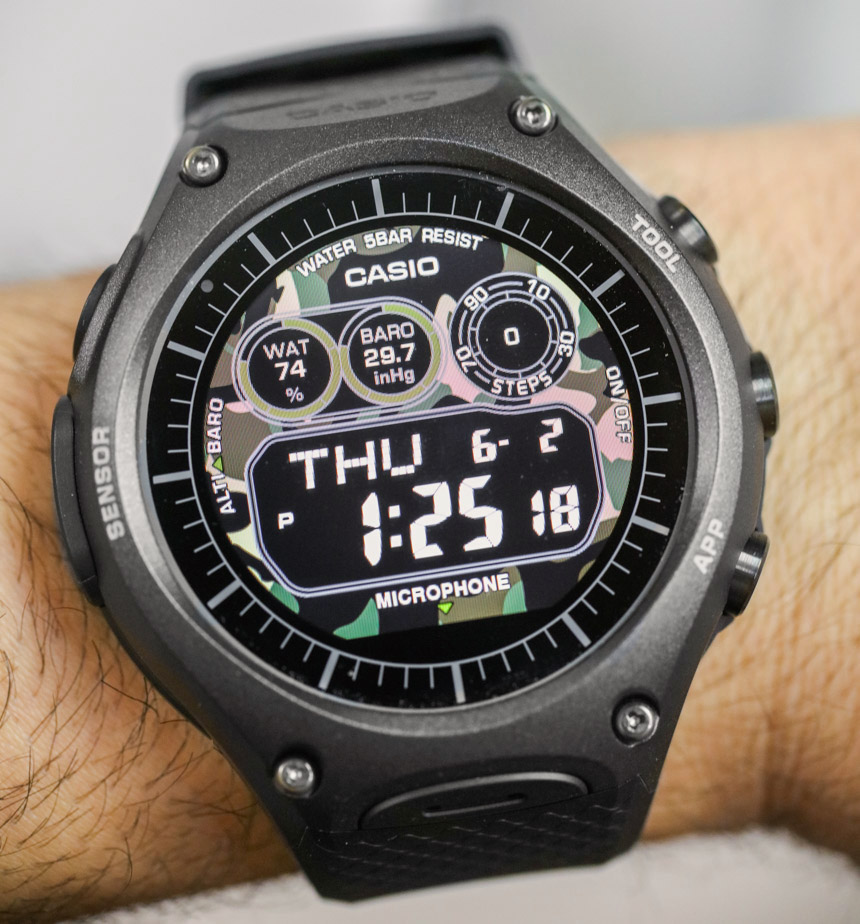 Of course, people can download any number of third-party watch faces to any Android Wear device – that isn’t the point. What I am asking for is well-designed and nicely curated watch faces from the brands I love… but with a lot of choices among them. To keep things interesting, Casio would easily benefit from releasing new watch faces for the WSD-F10 (available though its app) each month.

In terms of durability, the Casio WSD-F10 is water-resistant to 50 meters and is said to satisfy military MIL-STD-810 durability standards for shock and environmental resistance. Let’s be clear that a Casio G-Shock would win in a fight, but the Casio WSD-F10 can more than hold its own in the wild compared to many other currently available smartwatches. This is the first smartwatch I’ve personally worn that I feel like I want to rough and tumble a bit.

Going out in nature with the Casio WSD-F10, the device feels at home with a bright screen that is easy to see in direct sunlight and useful features. With that said, you can see the battery life drop over the course of a few hours which reminds you that this is still a device that needs to be tethered to a charging port each day. Casio uses a proprietary charging cable, and if you lose it, then you aren’t gonna have a good day. I’ve actually spoken to a scary amount of people who’ve simply lost their smartwatch charging cables. In the future, something needs to happen where these devices don’t need extra accessories to carry with you in order to charge them. 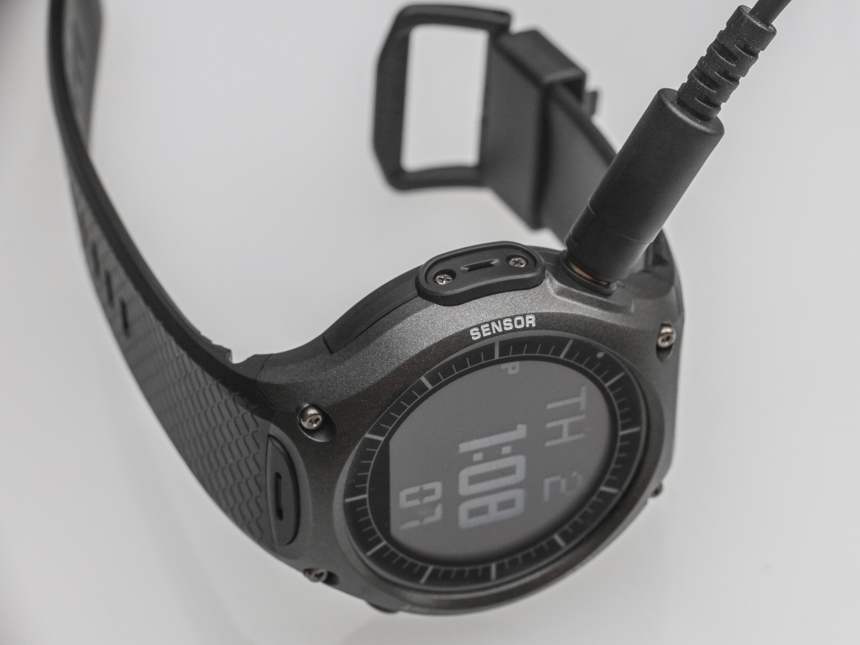 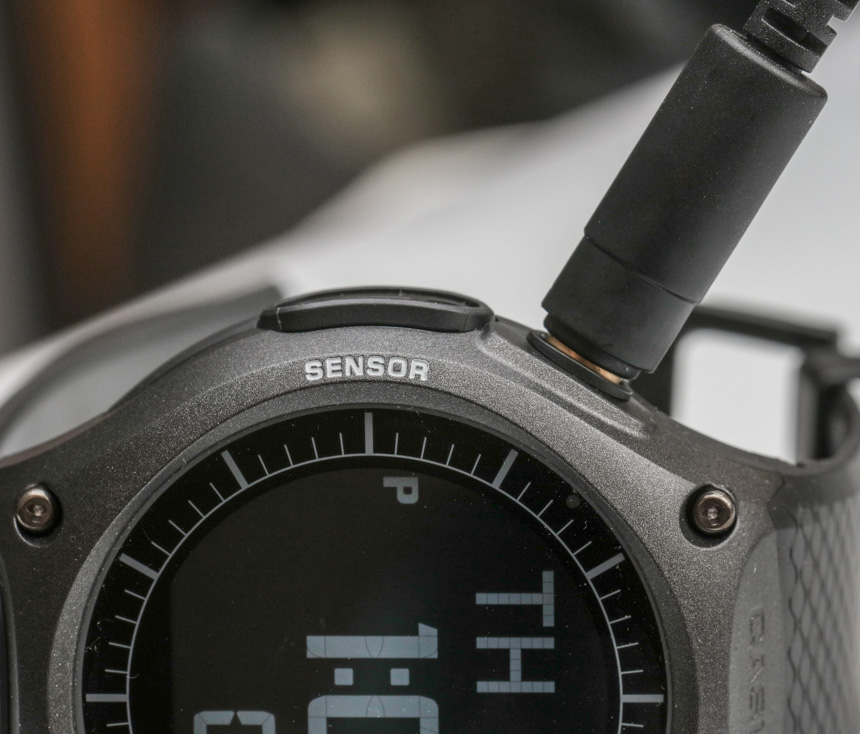 The limited battery lifespan on the Casio WSD-F10 is not the fault of the device or Casio, but a natural drawback given the state of smartwatches today. I almost want to wear a more traditional light-powered Casio sports watch in addition to the Casio WSD-F10 as a backup device. When Casio and other brands are able to offer full smartwatch functionality without having to connect a host smartphone device and offer a few weeks to a few months of battery life, then I promise you these devices will be adopted by mainstream consumers in truckloads. There is just so much inherent possibility and fun you can have with a device like this and the apps.

Sometimes, I like to turn off phone notifications altogether and just use features like weather and map data or more complicated sensors’ data applications to remind me of what smartwatches make available that even traditional Casio sport watches cannot. I find that a lot of the haters who dislike smartwatches simply haven’t played with them enough to tweak their operation to best suit them. 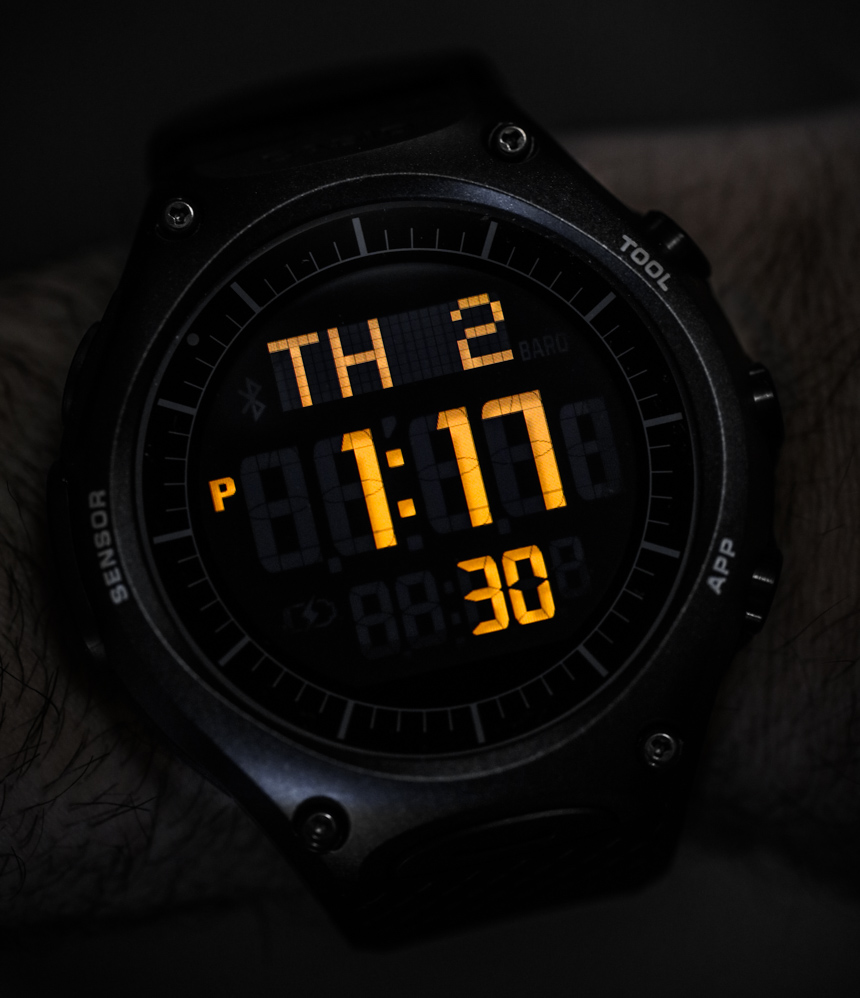 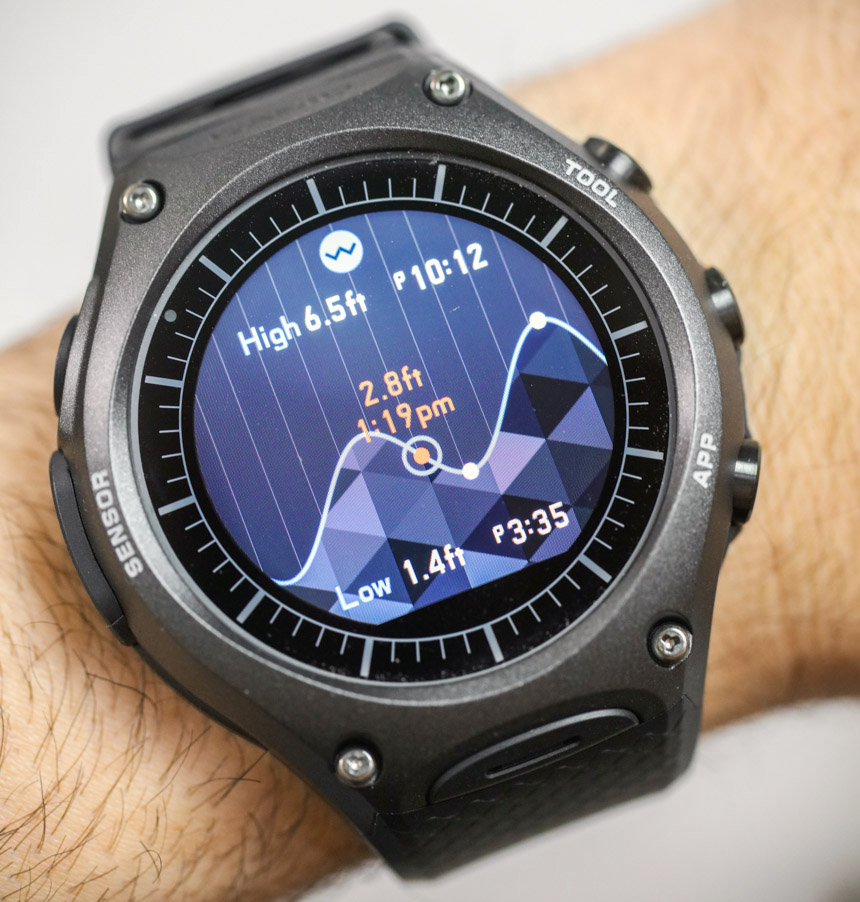 In many ways, this is not the fault of consumers, because the devices themselves are still not designed with perfect user interfaces. For instance, to fully control the watch, you need to use both the onscreen settings, the Android Wear app on your phone, as well as the Casio Moment Setter+ app. That is essentially three pieces of software, and simply too complex for mainstream consumers. Eventually, this will all be refined – this is Casio’s first smartwatch, after all.

When it comes to design, I have no problems with the look of the Casio WSD-F10 despite its gorilla-size (that I find charming a lot, actually). The interface of the software that Casio designed is generally very good and useful, and I like how they are branching out into new aesthetic codes when it comes to how they are designing the screens. I’ll say that the Casio software and screens look far sexier than the stock stuff you’ll find in Android Wear. 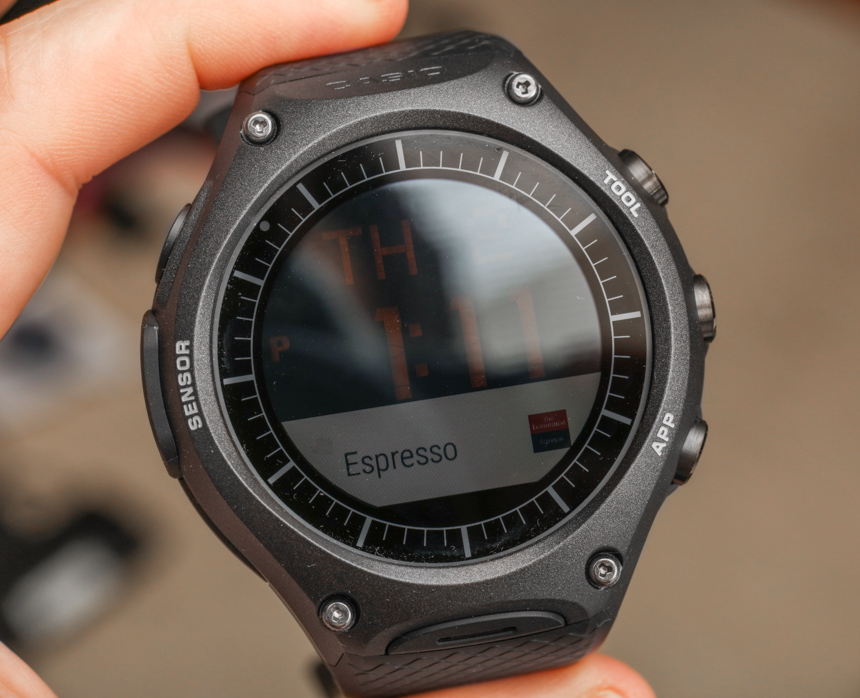 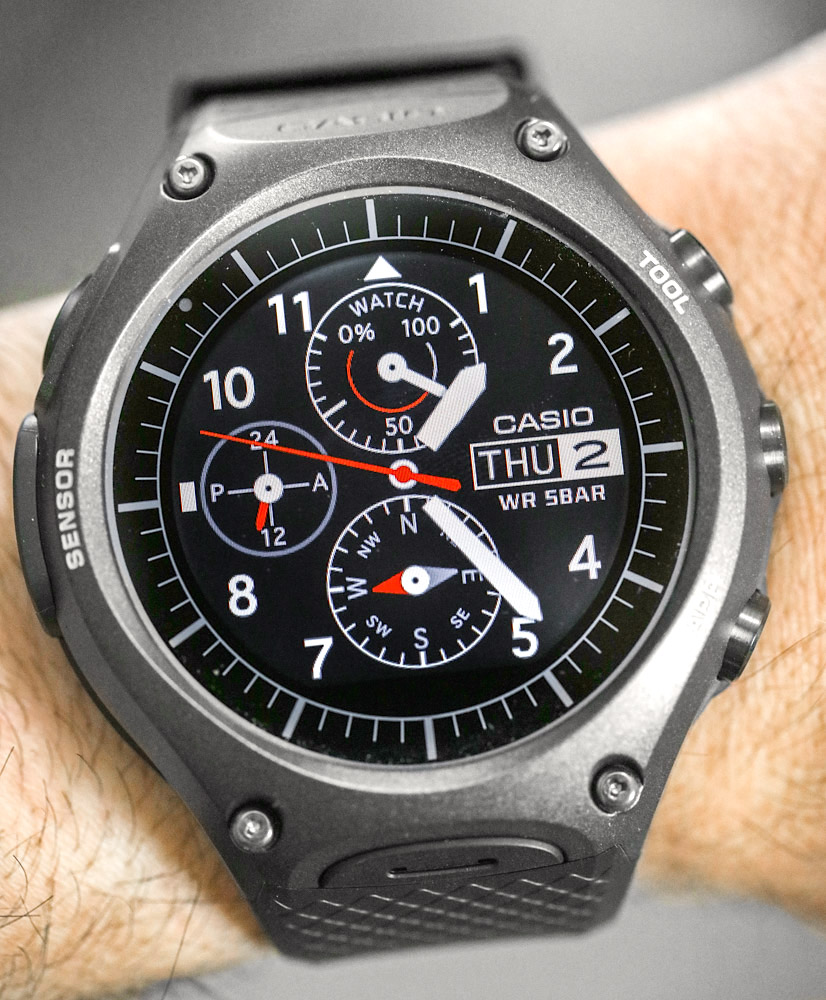 There really aren’t many drawbacks to the device which aren’t inherent to current Android Wear or smartwatches at this time. Of course, there are more features included in Android Wear that I am not covering, but it doesn’t make sense for me to re-review the operating system each time I talk about a new device. Casio’s debut entrant into the smartwatch space is a solid effort worthy of the Casio name, and I know this is just the beginning. It does command a slight premium price over some other Android Wear smartwatches, and even the base Apple Watch sport. With that said, you do get some extra functionality and it still costs 1/3 of what the TAG Heuer Connected does.

You’ll find lots of little gems to enjoy in what Casio designed for the WSD-F10, and while it doesn’t replace their existing world of smartwatches, it signifies the birth of a very important new family of products from the extremely capable Japanese watch maker. Price for the Casio WSD-F10 smartwatch is $500. wsd.casio.com

Necessary Data
>Brand: Casio
>Model: WSD-F10 (WSD-F10BK as tested)
>Price: $500 USD
>Size: 56.4mm wide
>Would reviewer personally wear it: Yes.
>Friend we’d recommend it to first: Outdoors guy or gal comfortable with Casio and ready to see how connected technology aids their adventurous pursuits.
>Best characteristic of watch: Attractive, sporty design in a well-built case with welcome extras such as “triple sensor” technology that Casio brings to the table. High-quality, in-house-designed watch faces, but there could be more of them with more customization.
>Worst characteristic of watch: Normal pitfalls of current Android Wear devices including battery life and sometimes cumbersome ways of adjusting settings. Large size of case might turn off some despite comfortable wear on the wrist.