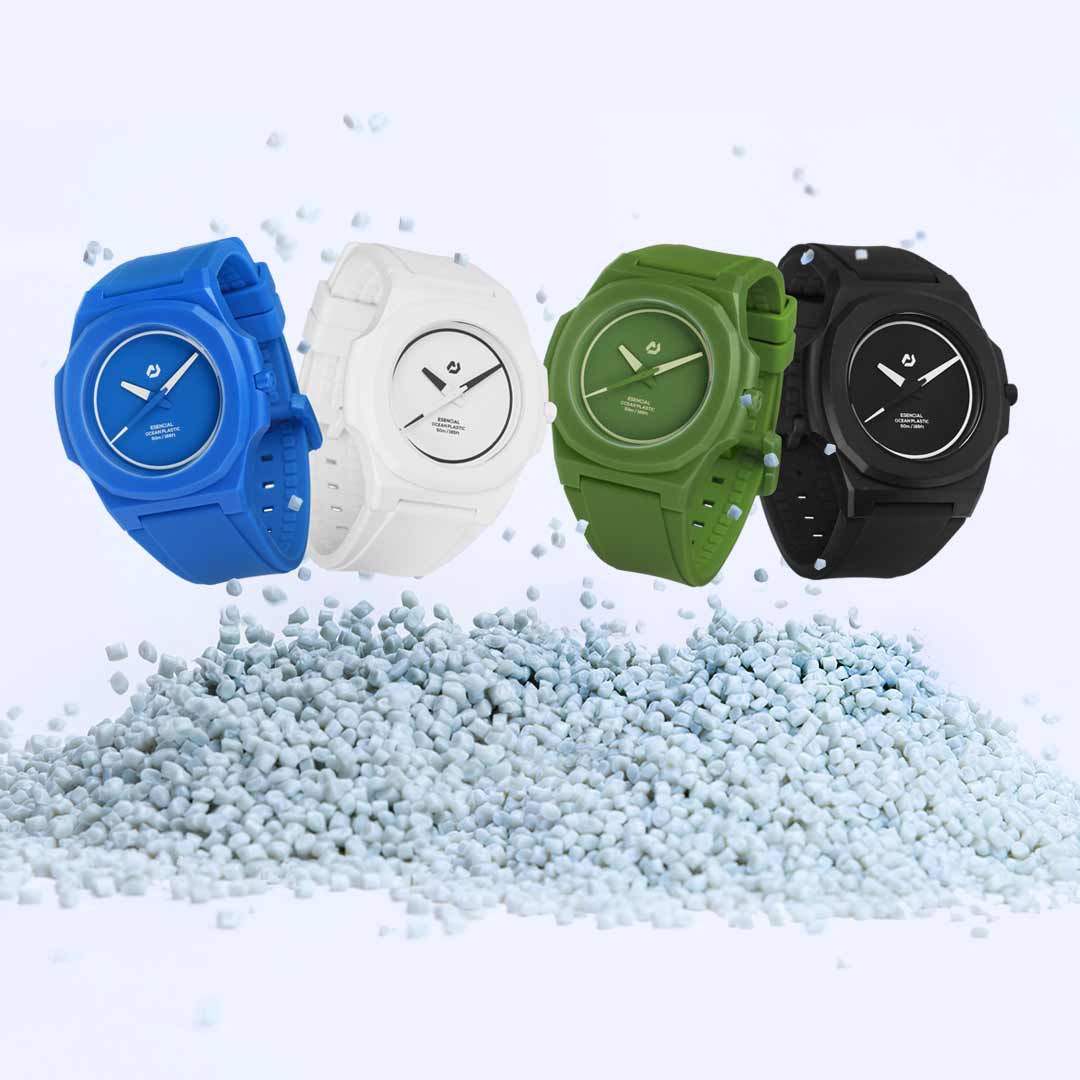 5 Comments
by SponsoredPost
Sponsored post presented on aBlogtoWatch for advertiser

In the run-up to this year’s Watches & Wonders show in Geneva, a new paradigm is emerging for how watch brands announce their newest products. In recent weeks, we’ve seen Bremont, Longines, and Omega drop a metric ton of new pieces, flaunting the tradition of trade-show releases and coordinated announcements. Yet just a few years ago, in the Before Times, events like Baselworld were essentially the only launchpad for big brands to announce new timepieces. In a post-COVID (we hope) world, that has shifted. Watchmakers are now launching models on their own timetables. To wit, keep an eye out for Breitling’s forthcoming announcements as they try to scoop Watches & Wonders next week. 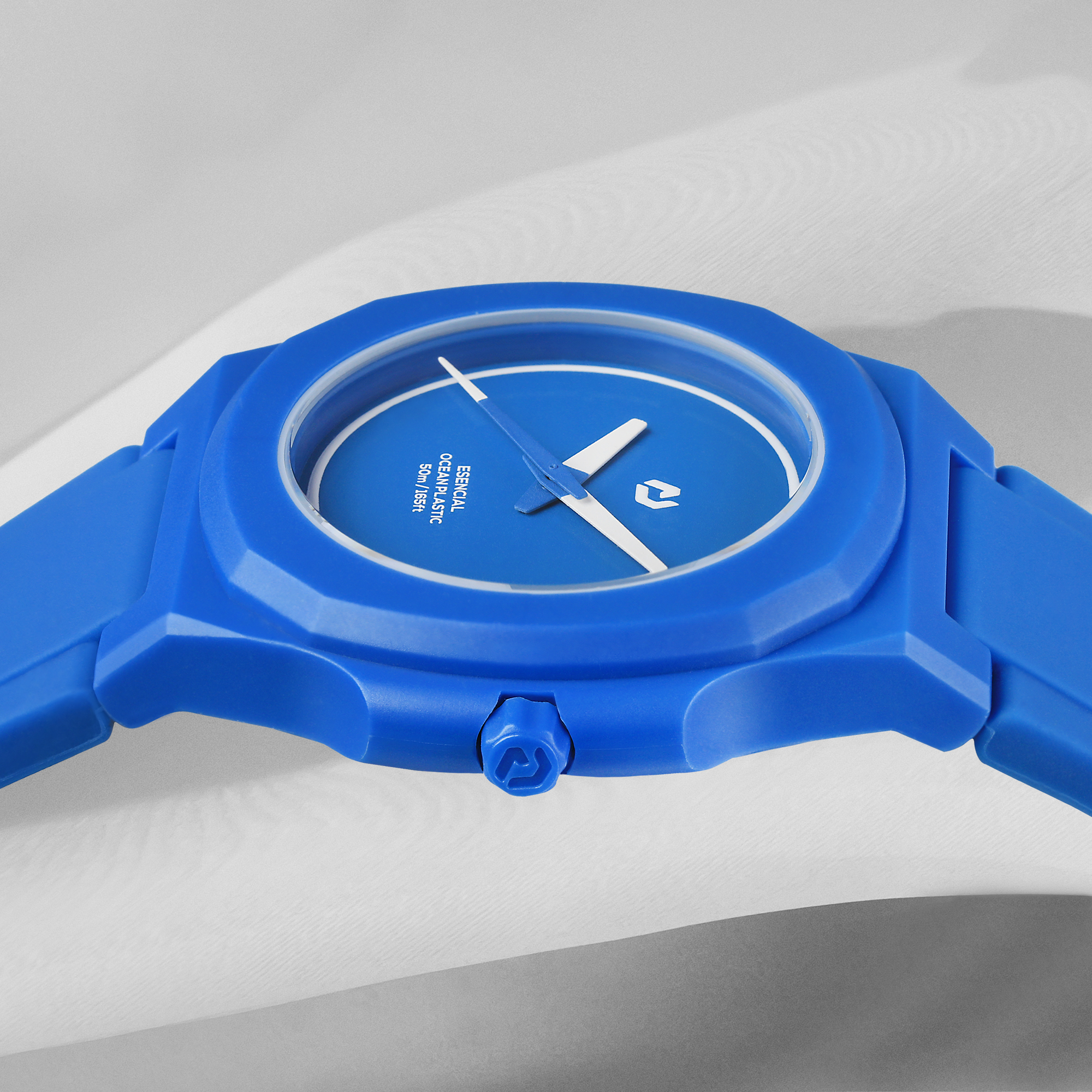 In the midst of all this jockeying, it’s easy to miss a brand’s new release, especially if that brand doesn’t enjoy the same name recognition as the “big boys.” But we’re loving the unlikely ways in which two watchmakers sometimes align in this maelstrom. Take Maurice Lacroix and Nuun Official, for instance. The former is a well-known Swiss manufacture approaching a half-century of luxury watchmaking heritage. The latter is a six-year-old outfit from Bahrain producing watches in the sub-$800 sector. What could they possibly have in common?

The answer lies in yet another unlikely place: #tide, an ocean conservation venture based in landlocked Switzerland. Pulling from a seemingly endless supply of ocean plastics, #tide uses a proprietary process to granulate plastics, enabling the material to be used again. While there is much potential for the yarns, filaments, and granules #tide produces, an early adopter has been the watch industry. The recent demand for unconventional designs and bright colors among watch collectors has created an opening for watchmaking materials like plastic, and it’s here that Nuun Official and Maurice Lacroix collide. This week, ML announced the addition of 10 new references as part of its Aikon lineup, while last month, Nuun Official presented the Esencial collection. Each uses #tide’s ocean material but we must say we’re particularly intrigued by Nuun Official’s Esencial. The Nuun Official model employs a 39mm homage case shape that proves what we already knew: This sort of masterful shape is becoming a touchstone of global design like the iPhone or the Flieger dial general forms. Visions, inspirations, and references are to some extent always co-opted by others. In Nuun Official’s case, its technically unique form is a clever visual pun. Rising literally from the ocean, this is an upcycled nautical redress for our plastics problem. 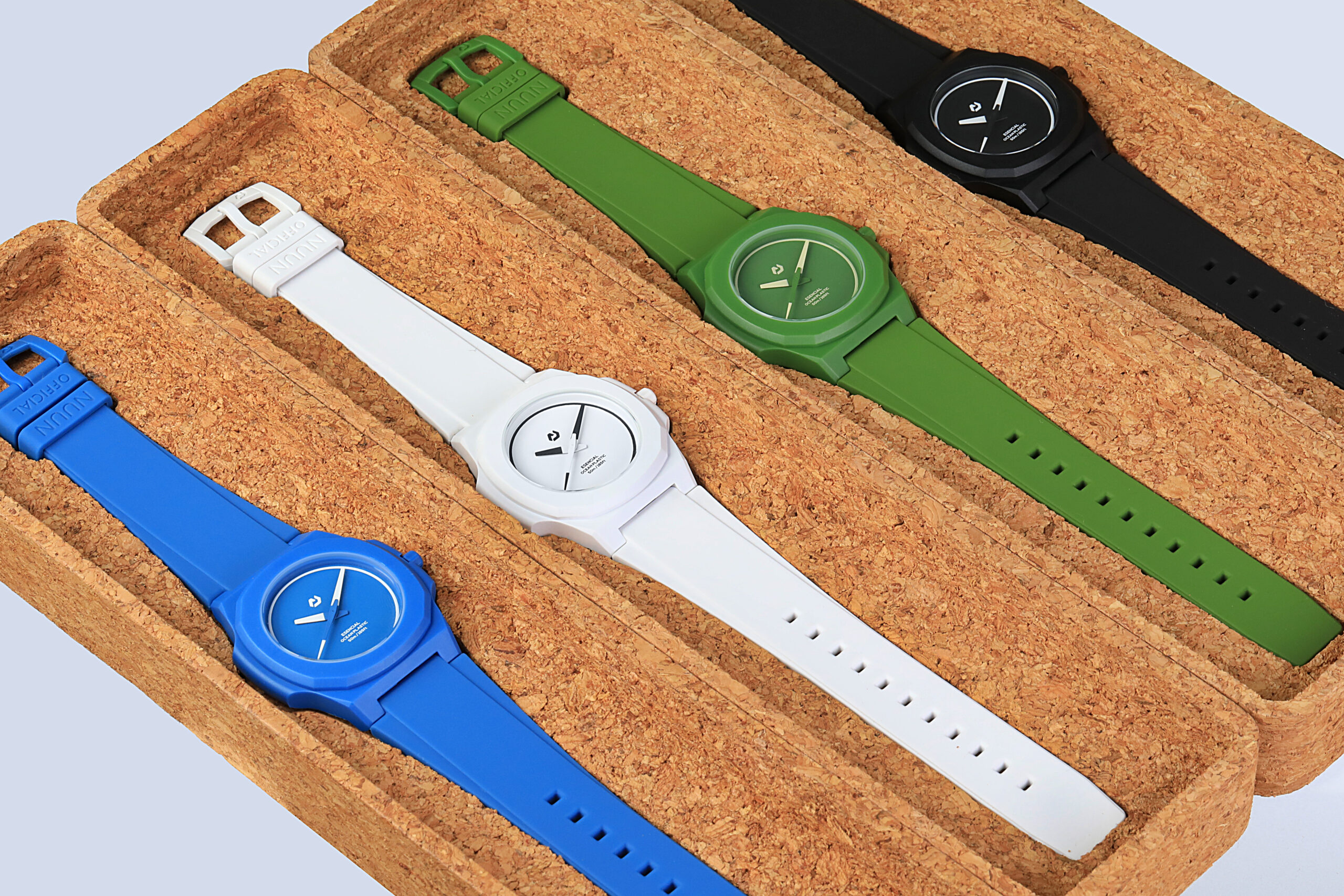 To that end, the Esencial’s construction — case, dial, and buckle — are made from #tide’s ocean material, while the bio-sourced natural rubber strap color-matches the rest of the watch, connecting to the miniature lugs to make for an integrated design. All told, the Esencial is a unique bird thanks not just to the partnership with #tide but also because of its emerging partnership with Pavilion Renewables, another Bahraini organization with which Nuun Official plans to eventually “locally source” ocean plastics and other materials for its watchmaking. 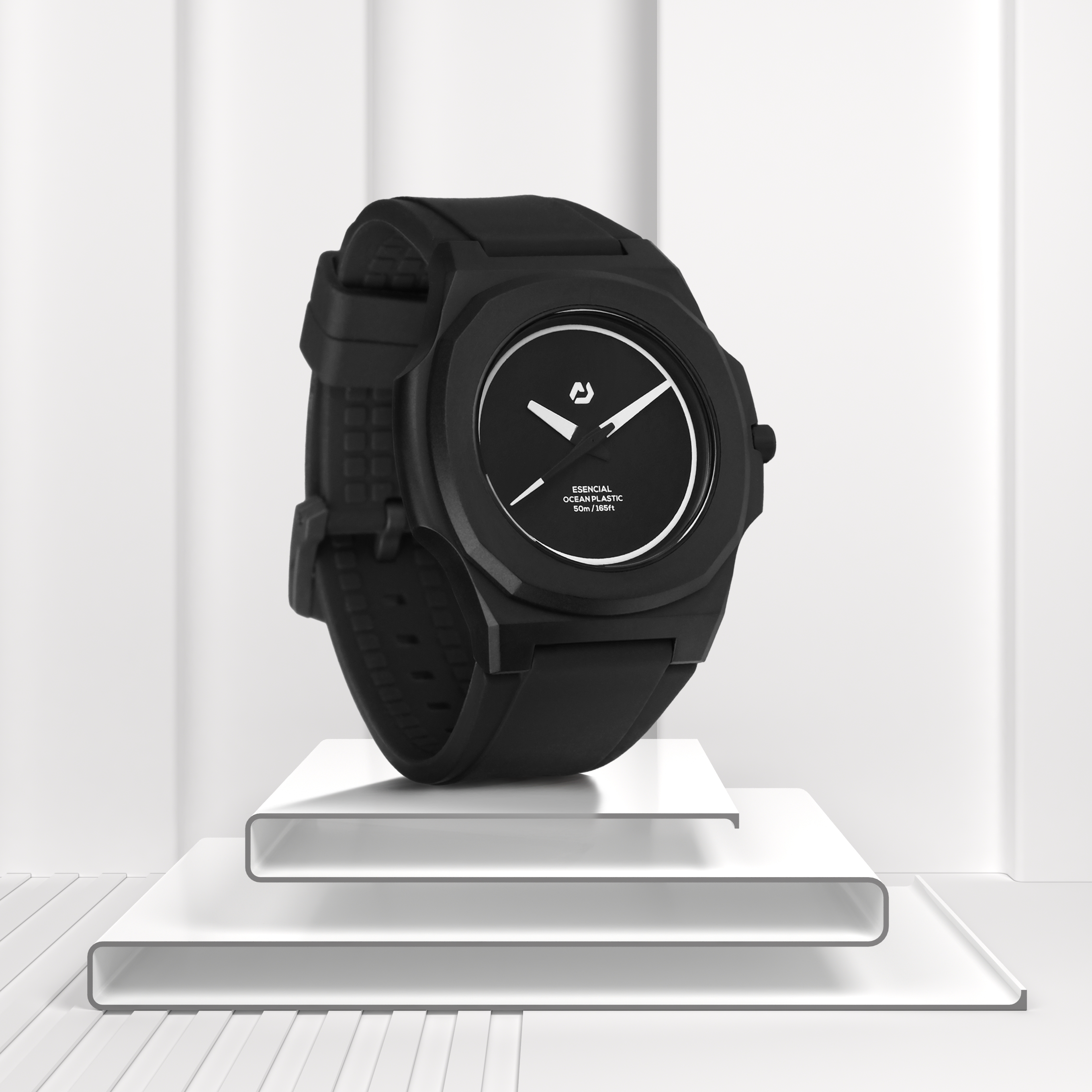 From a style standpoint, the Esencial is conspicuous without being audacious. The absence of any markers makes for an austere, minimalist affair that is still readable. Even on the all-black unit, high-contrast white accents make referencing the time a cinch. In fact, the only markings are Nuun Official’s logo at 12 o’clock, a design evocative of the ubiquitous recycling symbol. Just below at 6, the solitary text is a reminder of “Esencial Ocean Plastic” and a depth rating of 50 meters. As such, this is a watch that can return to the sea and will perform safely during swims. An anti-reflective coating reduces glare when submerged, and the mineral glass is resistant to cracks and scratches. Inside, a Miyota caliber 2037 quartz movement drives the hands and contributes to the thin side profile of just 9mm. 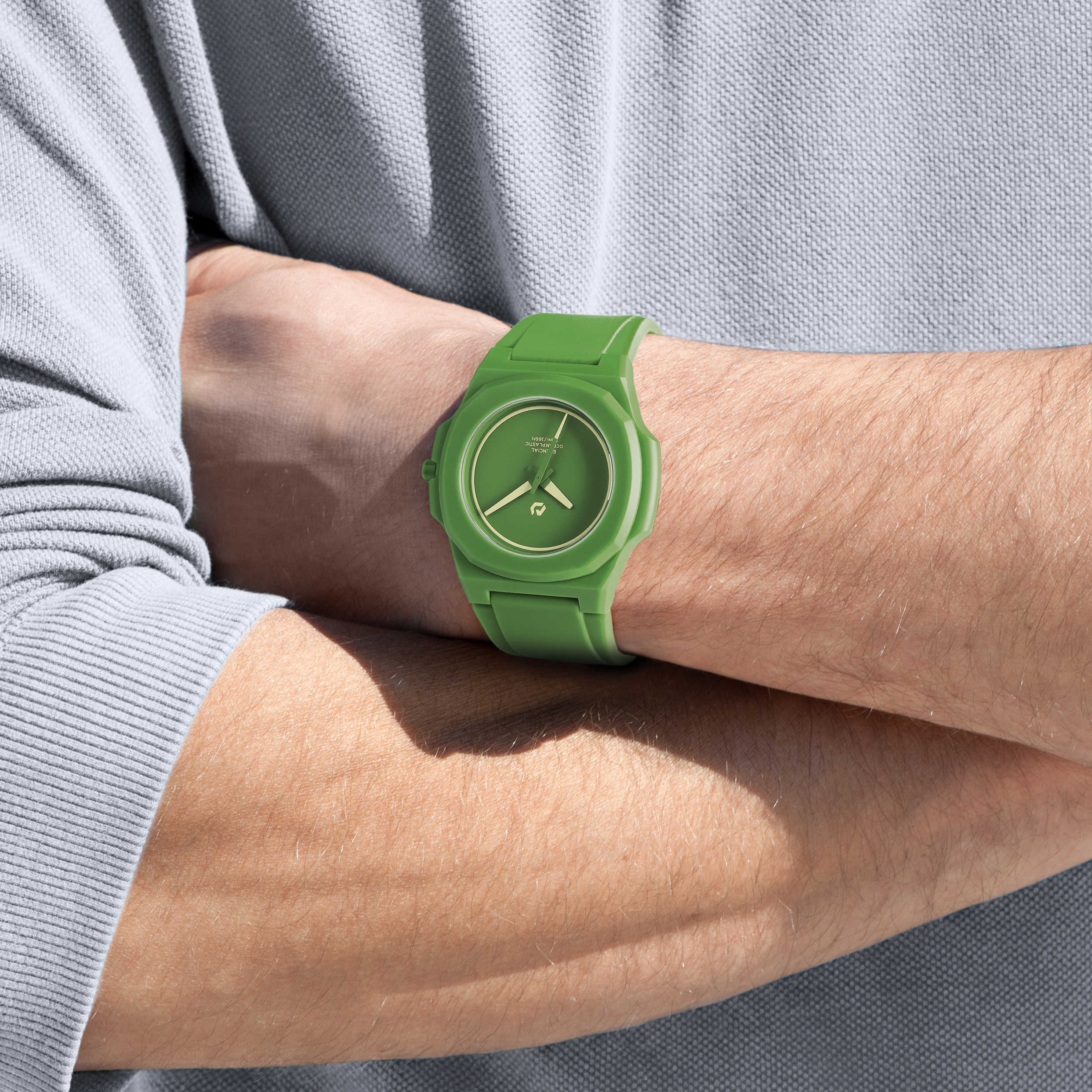 The Nuun Official Esencial is a quartz three-hander with an eye-catching design for around $150 USD. The brand’s admirable commitment to the planet and enthusiasm for watchmaking in a region that has historically been strictly a horological importer makes the Esencial worthy of special consideration. As the watch world moves toward new initiatives and partnerships with organizations like #tide, Nuun Official has placed itself at the head of that movement, right alongside the big-name brands.

The Esencial is available now in white, black, blue, and green on Nuun Official’s site, nuunofficial.com.