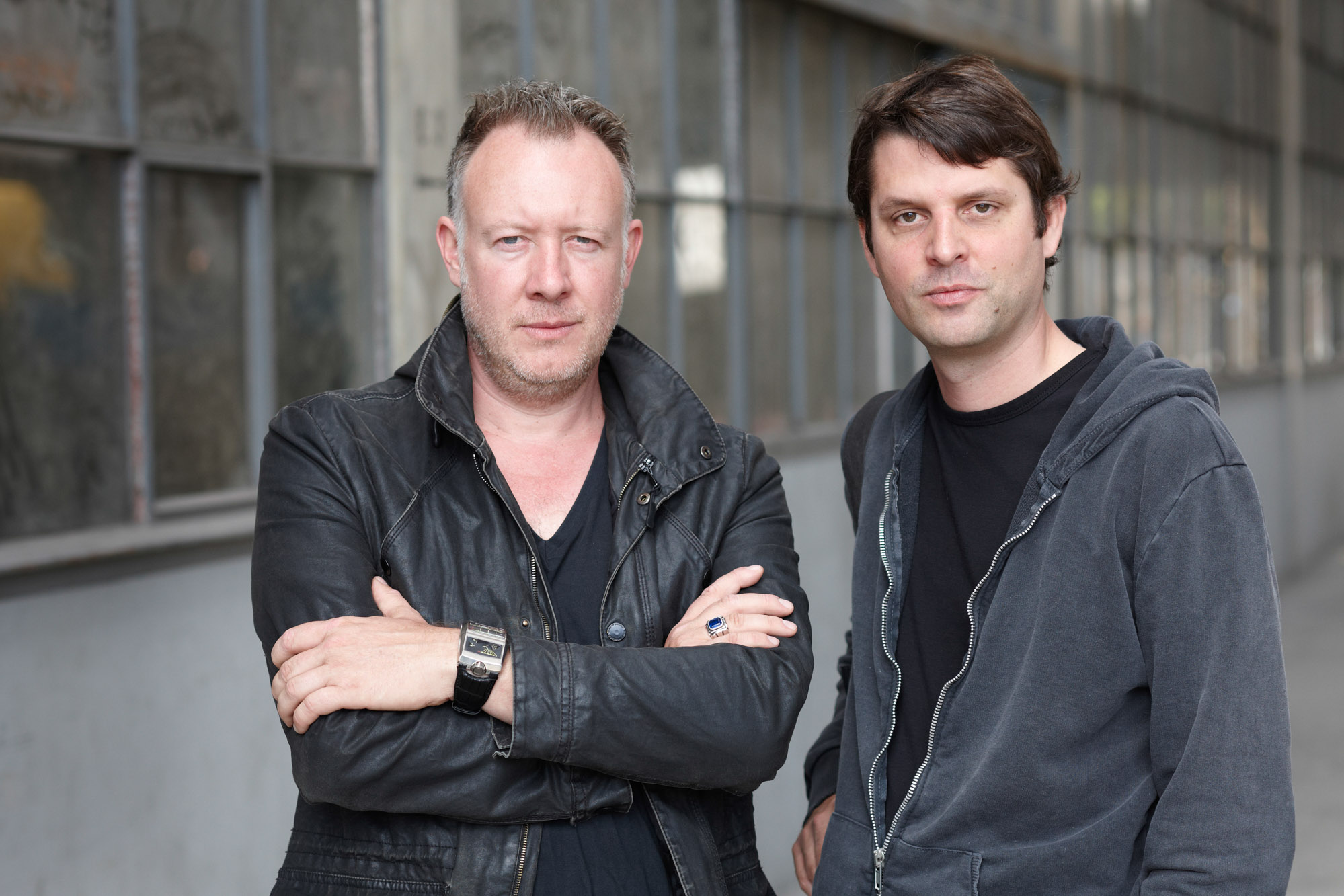 URWERK is celebrating its 25th anniversary this year. First and foremost a human adventure, URWERK is the brainchild of Felix Baumgartner and Martin Frei, who recount here their first steps into the world of fine watchmaking and signal the start of an anniversary year like no other.

Erika Yvonne Frei (Martin Frei’s mother and his first art teacher), says, “Martin has always liked to see the world through its reflection. I loved watching his stories unfold in colors and shapes as he let his imagination run wild while finger painting on the parlor table, duly covered in wrapping paper. And when every available inch of paper was covered, the roll of paper continued to be unrolled further along the table to make space for more. During his nursery school years, shapes and colors gave way to a fascination with divers — so much so that the somewhat surprised school teacher said, ‘Can’t he draw anything else?’ Then came tree houses, spaceships, futuristic planes, racing cars, and action heroes all reinvented in endless drawings.” 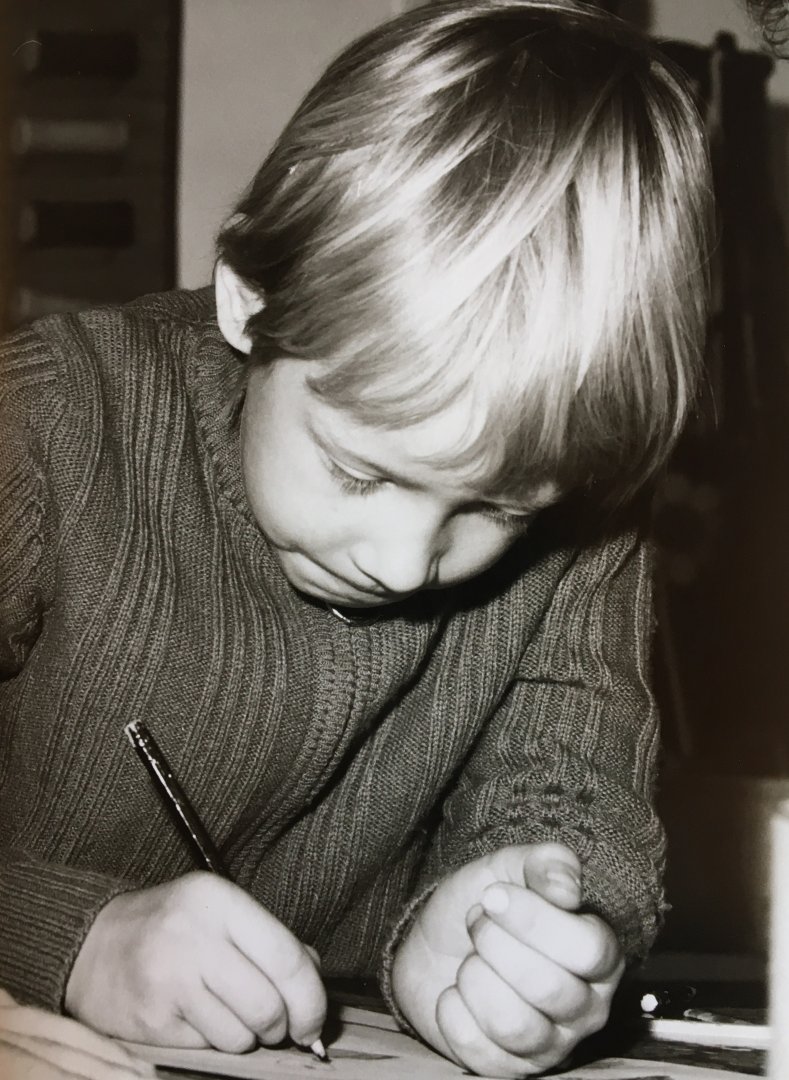 She continues: “Martin grew up and passed the entrance exam for the preliminary course at the Art school in Zurich – the perfect springboard to a future in which his boundless imagination and his talent for drawing could truly blossom. Martin’s career was launched, and after becoming a graphic designer, he continued his studies in free art at Lucerne’s art school. Today, Martin’s inventive nature continues to unfold with the same panache as ever.” 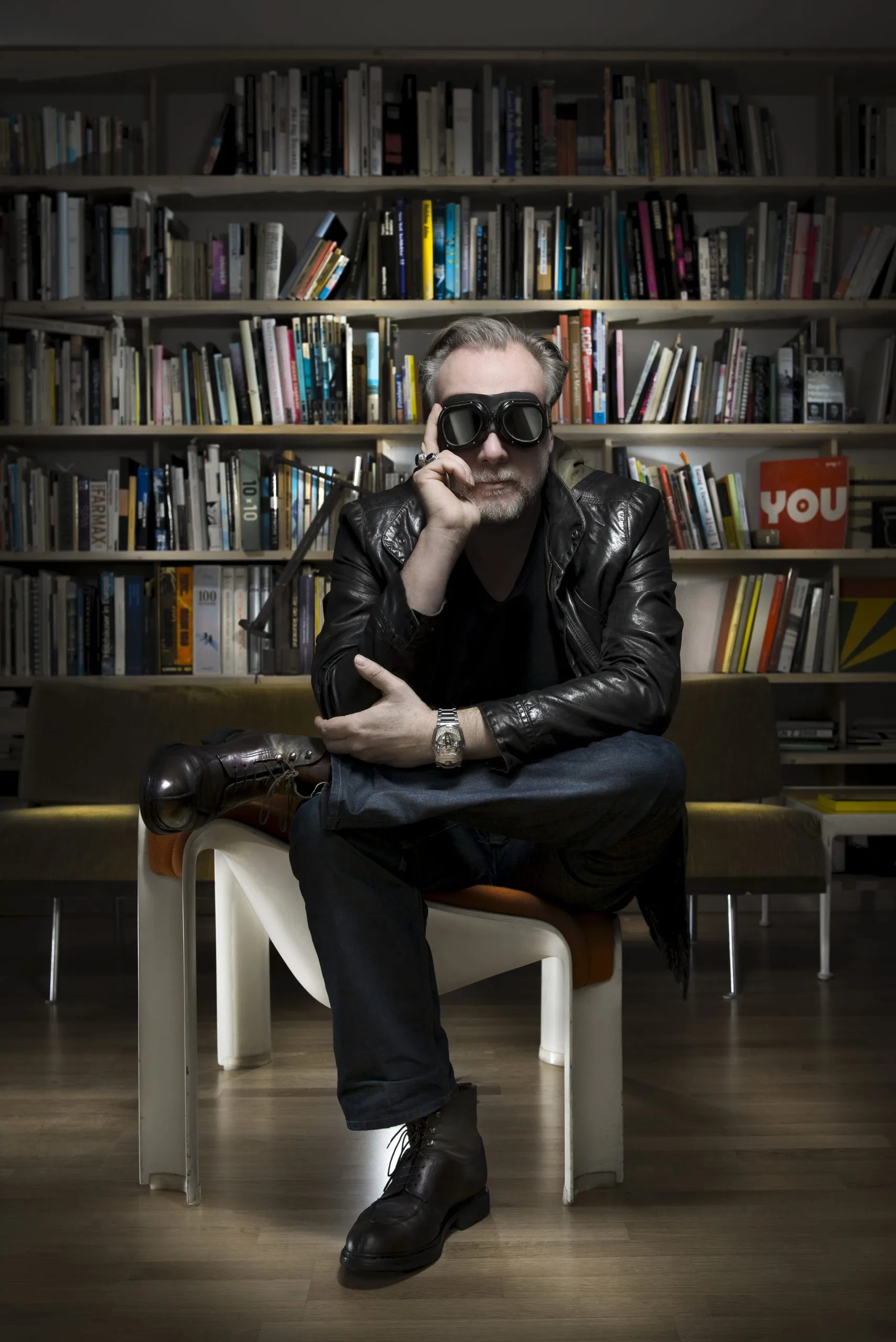 Of himself, Martin says, “In the early 1990s, I was a student at Lucerne University of Applied Sciences and Art. At a New Year Eve’s party in Ticino, the Swiss Italian part of Switzerland, my class and roommate Christoph Draeger showed up with his cousin Thomas Baumgartner. We had dinner and enjoyed the wine. The evening progressed with great music: We had some extremely rare records playing, sixties punk, and a stack of cool bootleg singles. Soon, we were all dancing frantically late into that ice-cold winter night.

Thomas moved in with Christoph and me in Lucerne, and we used to hang out together. From time to time, his younger brother Felix would join us.  We were young, creative, and had tremendous energy, and strong wills. We spent many hours discussing Art, watchmaking, music, and sci-fi. During one of these wild exchanges, I had a flash: ‘Let’s make a watch together, one with a cool concept.’

Years passed by. Felix was completing his watchmaking course in Solothurn and Thomas had moved to St Croix.  They had new ideas and proposed that we create our own brand, our own band. They were stimulated by a group of crazy new friends: Vianney Halter, François Junod, and other young watchmakers that they had been hanging out with. During wild sessions of drinking absinth and pondering our future, the Baumgartner brothers shared a new concept with me: a watch with no hands, where the hours also indicate the minutes. I was immediately seduced by the concept and began to draw some preliminary sketches. Our first URWERK watch, the UR-101 was soon to be born.” 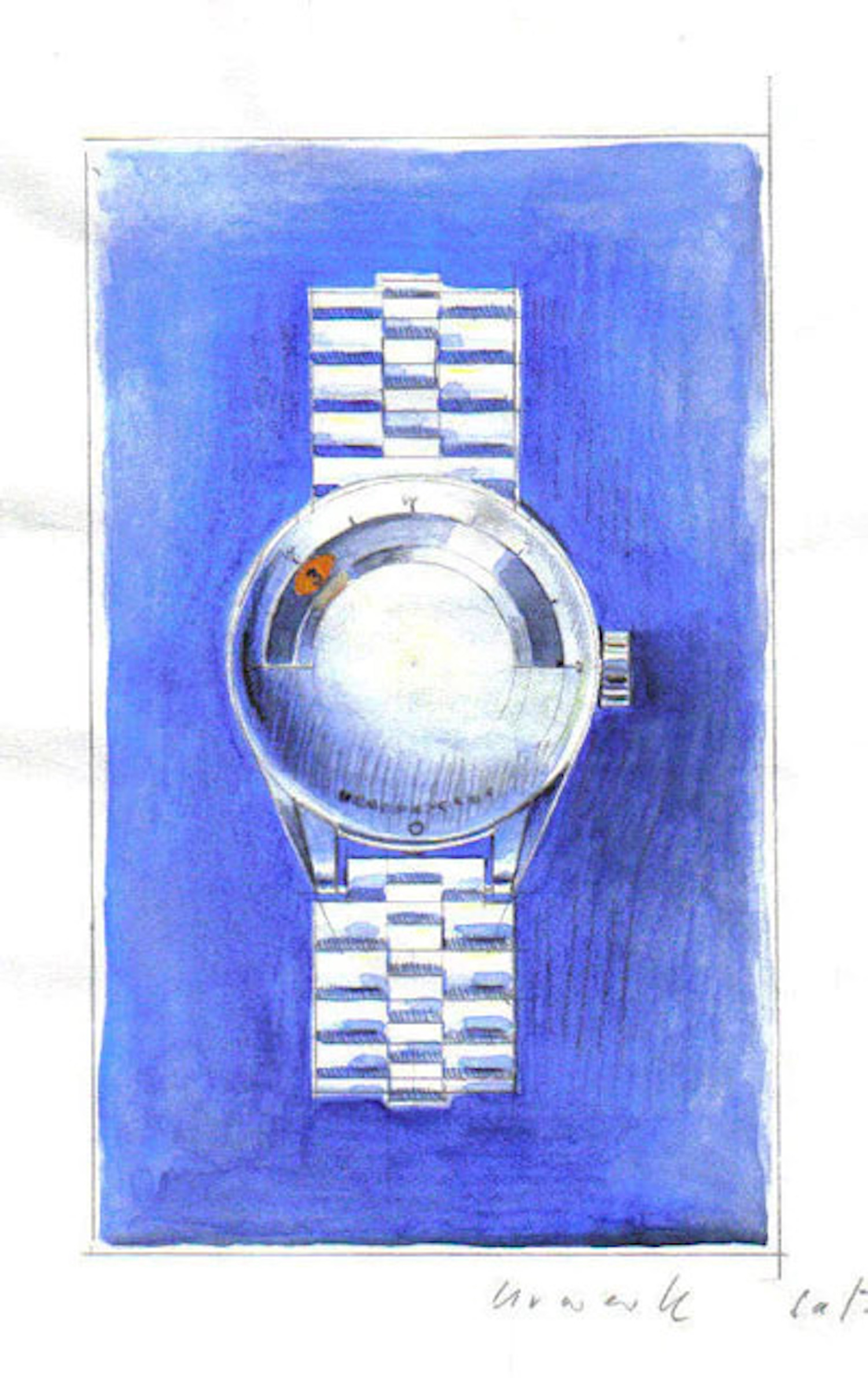 Svend Andersen (an independent watchmaker who co-founded the AHCI in 1985), says, “Felix came to me in September 1995 directly from the watchmaking school in Solothurn because he did not want to work for a company engaged in large-scale production. He had heard about us from a watchmaking teacher who knew me through Chronometrophilia. We immediately hit it off, and he moved to Geneva a few days later. Felix worked for us partly as a salaried employee and partly as a freelancer. He worked on our world time modules, the 2000 perpetual and secular calendar models, as well as restoring complicated watches for prestigious brands.

Alongside this important project, Felix began work on the URWERK “satellite” display. He tested several jumper-spring techniques, but they required too much force. Then one day we restored a complicated pocket watch featuring a “Maltese cross” stop-work device in the movement. This was a turning point. Felix made countless crosses on the 102 lathe to make his display work properly and ended up finding the right combination. This historic mechanism became the heart of an avant-garde watch. In 1998, Felix left our workshop and moved to the very first URWERK atelier, rue de Cornavin (Geneva). And the rest, as they say, is history.” 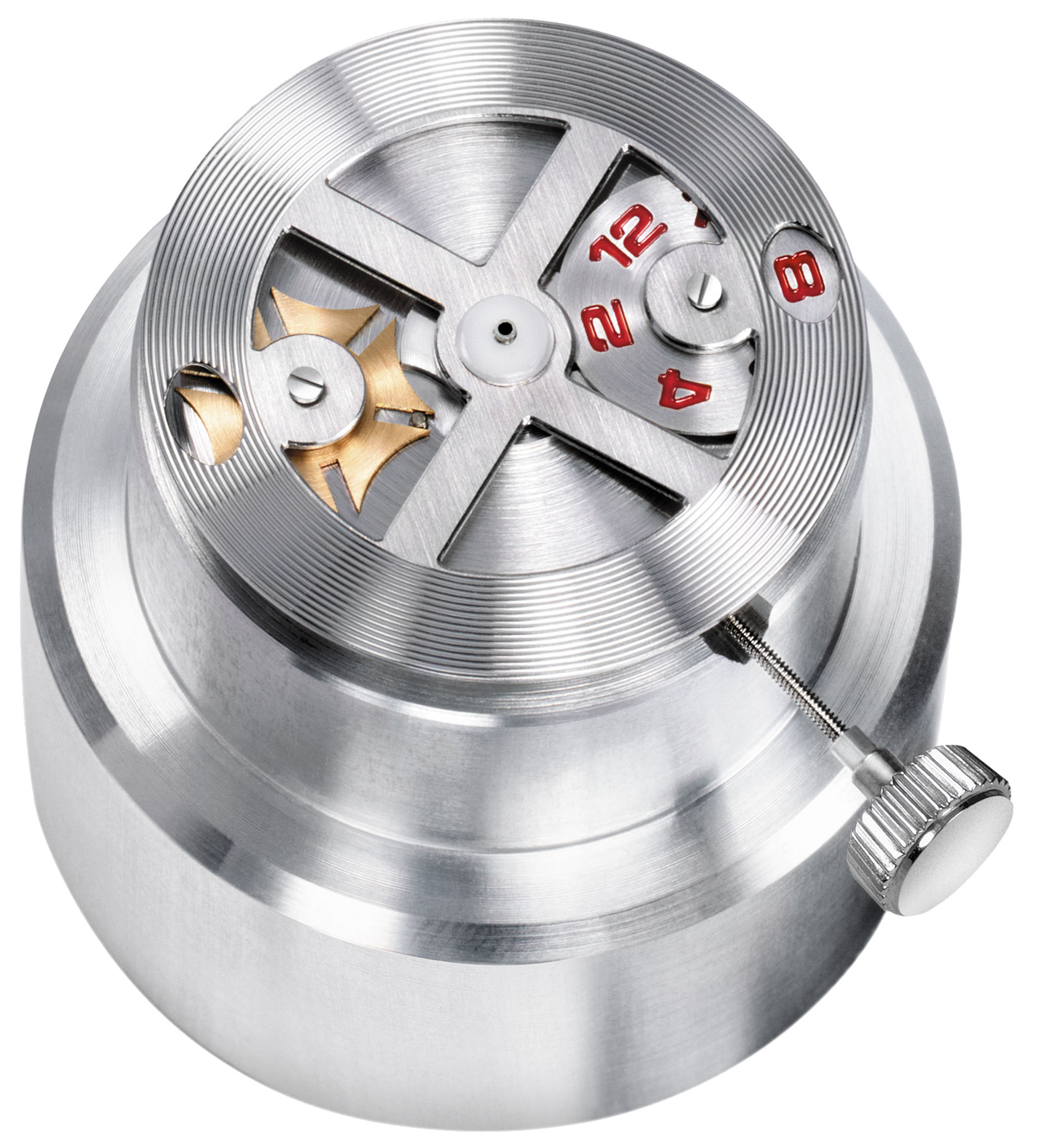 Felix Baumgartner says, “We launched our URWERK brand 25 years ago. We had no funds and no structure, but we were driven by two almost obsessive core ideas: our hour satellite indication and the conviction that it was time to challenge Haute Horlogerie with new blood, new ideas, and modern technologies. We were regarded as young fools but were brimming with ambition. We imagined dethroning Rolex, seeing our names at the top of the bill, and seeing URWERK shine in the bastion of fine watchmaking that is Geneva. We were young and naive – and that was undoubtedly one of our greatest assets, the best mindset in which to embark on an adventure like this.

We began our journey in April 1997 at the AHCI booth at Baselworld. We were sponsored into the AHCI by Sven Andersen, the co-founder of the Academy. Svend had been my first employer and opened the doors of the AHCI to us. That first year we presented just two of our UR-102 watches in steel as we couldn’t afford to buy gold cases, and we had no showcase, so we displayed our watches on a portable cooking hotplate. We were running in overdrive: enthusiastic, eager to show our potential, provocative, and ready to take on the world.” 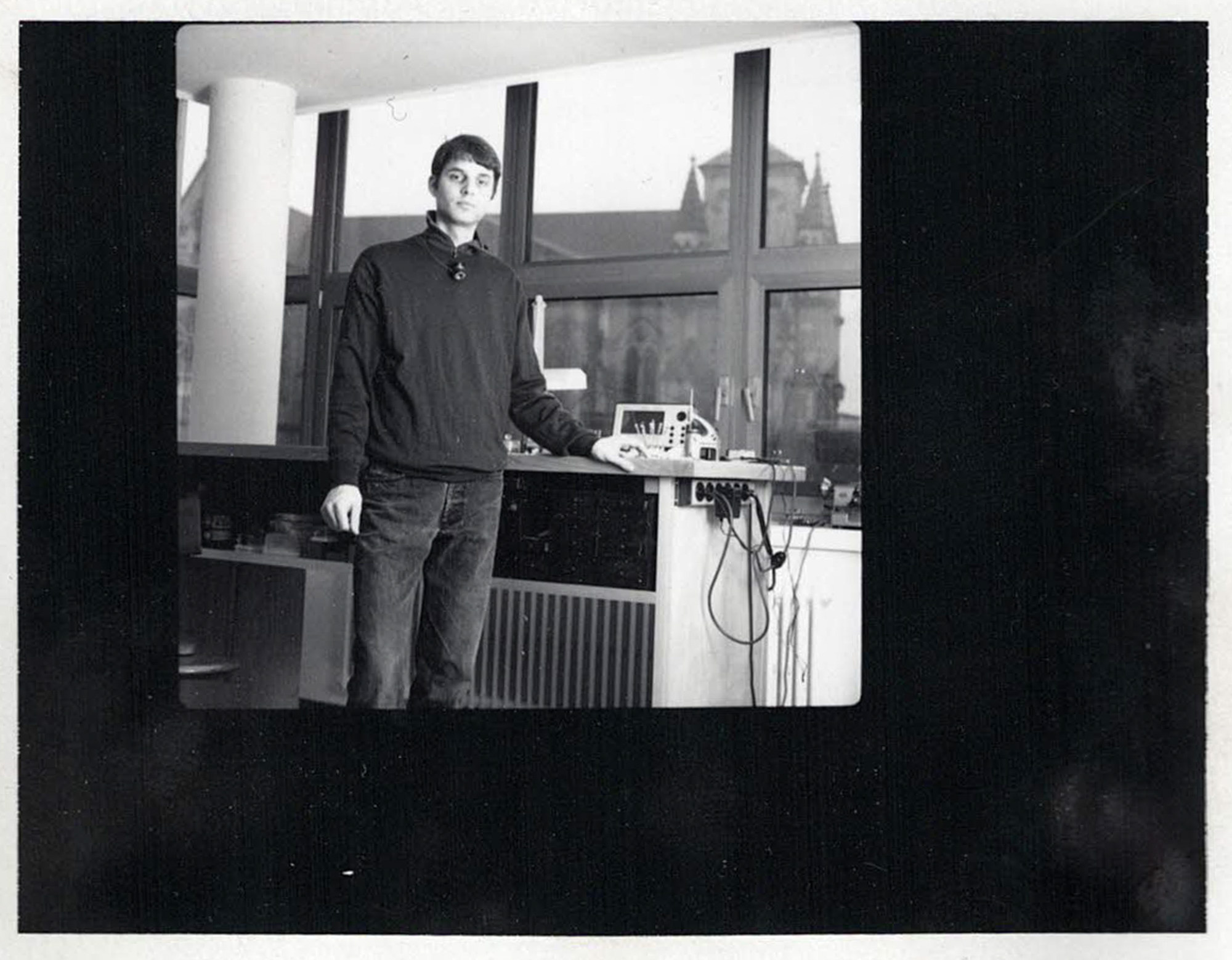 With its minimalistic wandering hour display, reminiscent of a satellite or planet moving across the sky, the UR-101 and UR-102 were the first timepieces embodying the brand’s ambition to make art that tells time. The UR-101 and UR-102 were followed by the UR-103 — the result of 6 years of hardships and dedicated development work. The 2003 UR-103 replaced the rather more traditional-looking wandering hours of its predecessors for the satellite-style version that went on to serve as the basis for so many iconic Urwerk references that were to come. 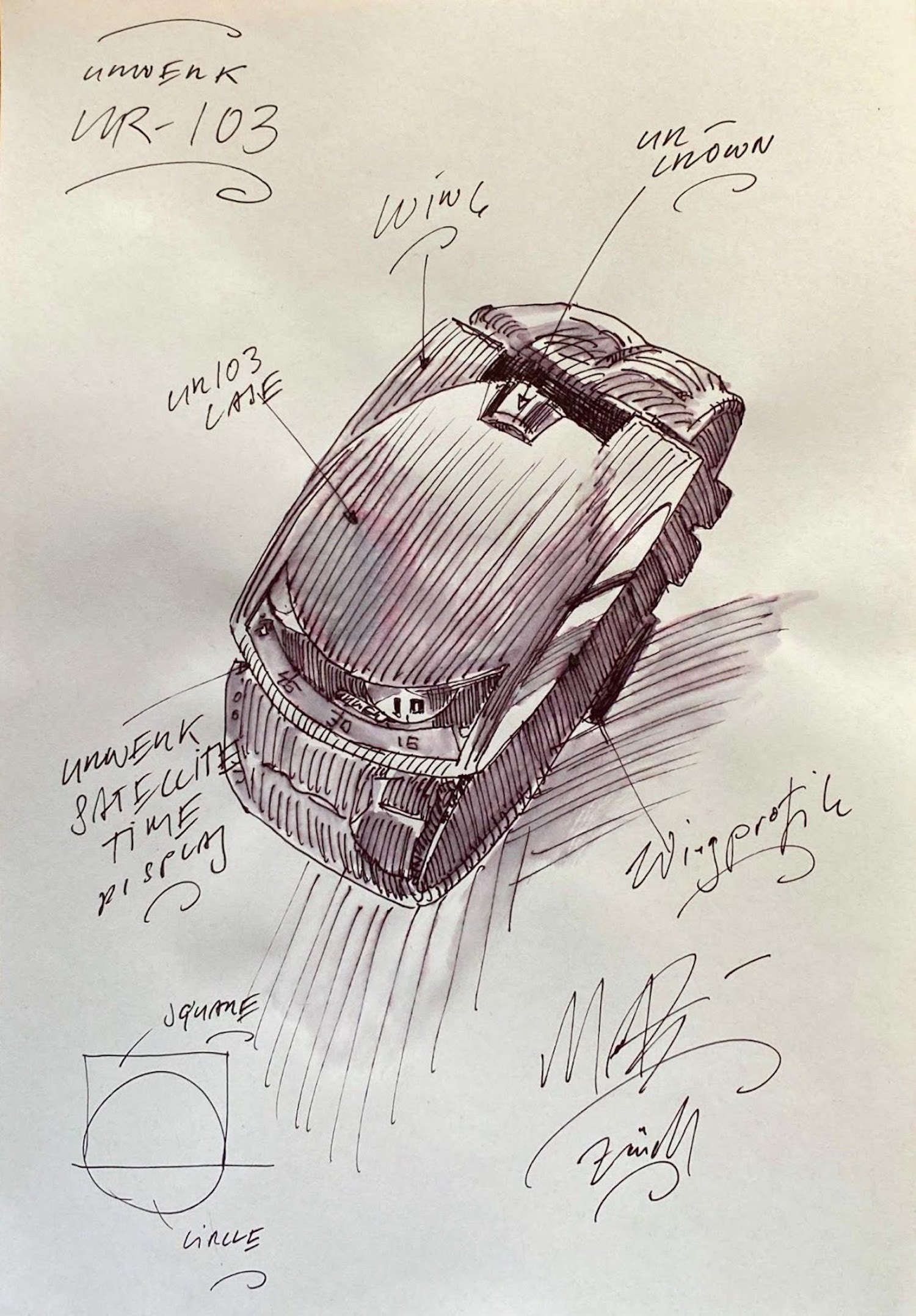 The UR-103’s principal technical challenge was to ensure the excellent isochronal performance of the satellites while minimizing friction and loss of energy. This was crucial, as the satellite complication weighs in at 160 times heavier than traditional hands, placing a heavy strain on the movement. High-tech materials came to the rescue and helped minimize mass and maximize chronometric performance. One of the many notable breakthrough moments for Urwerk came in 2005 when the duo launched their Harry Winston Opus V — the project was consigned back at the time when a certain Maximilian Büsser was overseeing its star-maker Opus series. 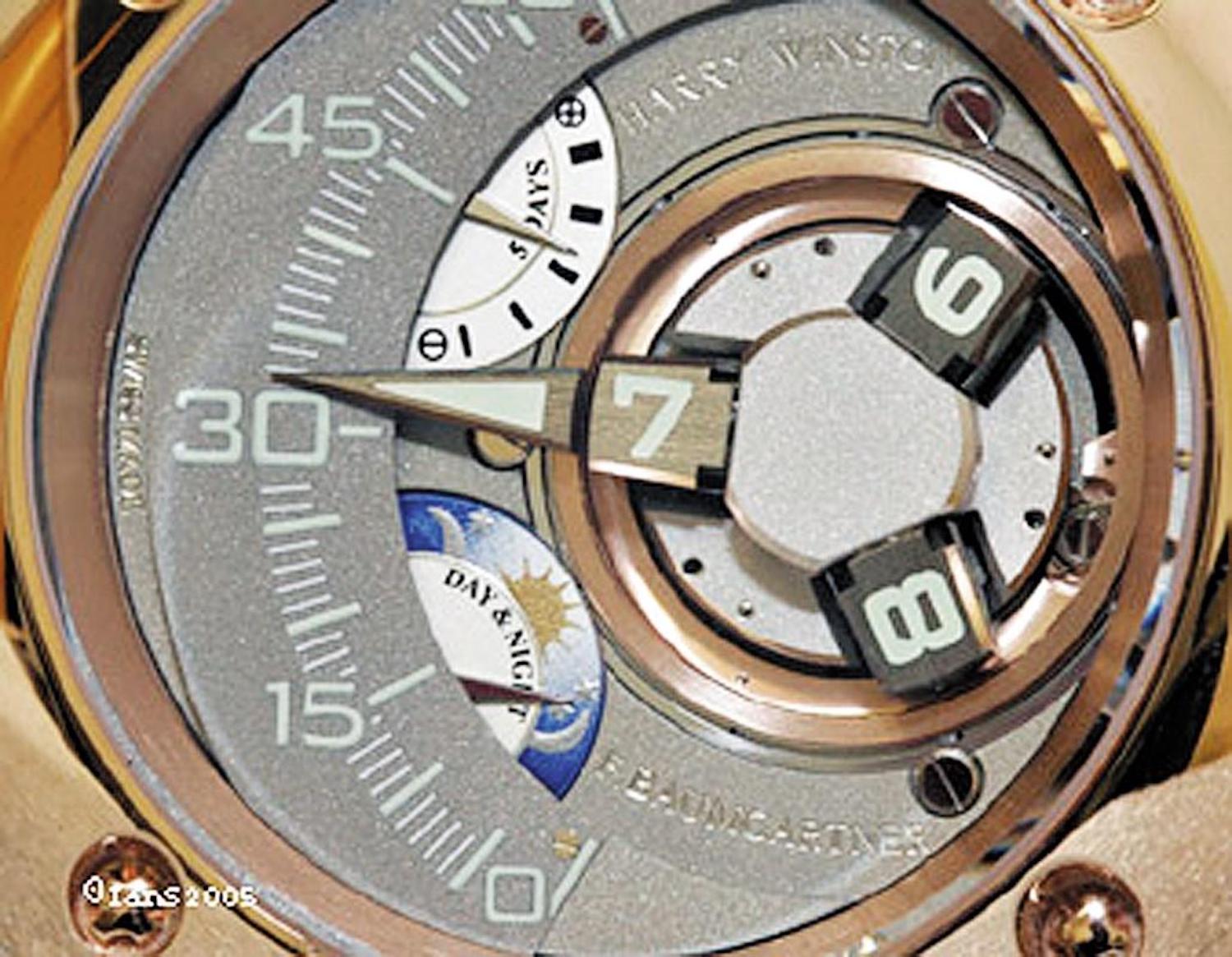 2008’s Urwerk UR-202 “Hammerhead” also features the brand’s patented Revolving Satellite Complication with telescopic minute hands. It is the world’s first watch with a winding rate regulated by fluid dynamics. As long ago as the 18th century, clockmakers were using air friction to regulate the speed of chiming clocks, and their techniques evolved to become the preferred method of regulating the rate of chimes on minute-repeaters. 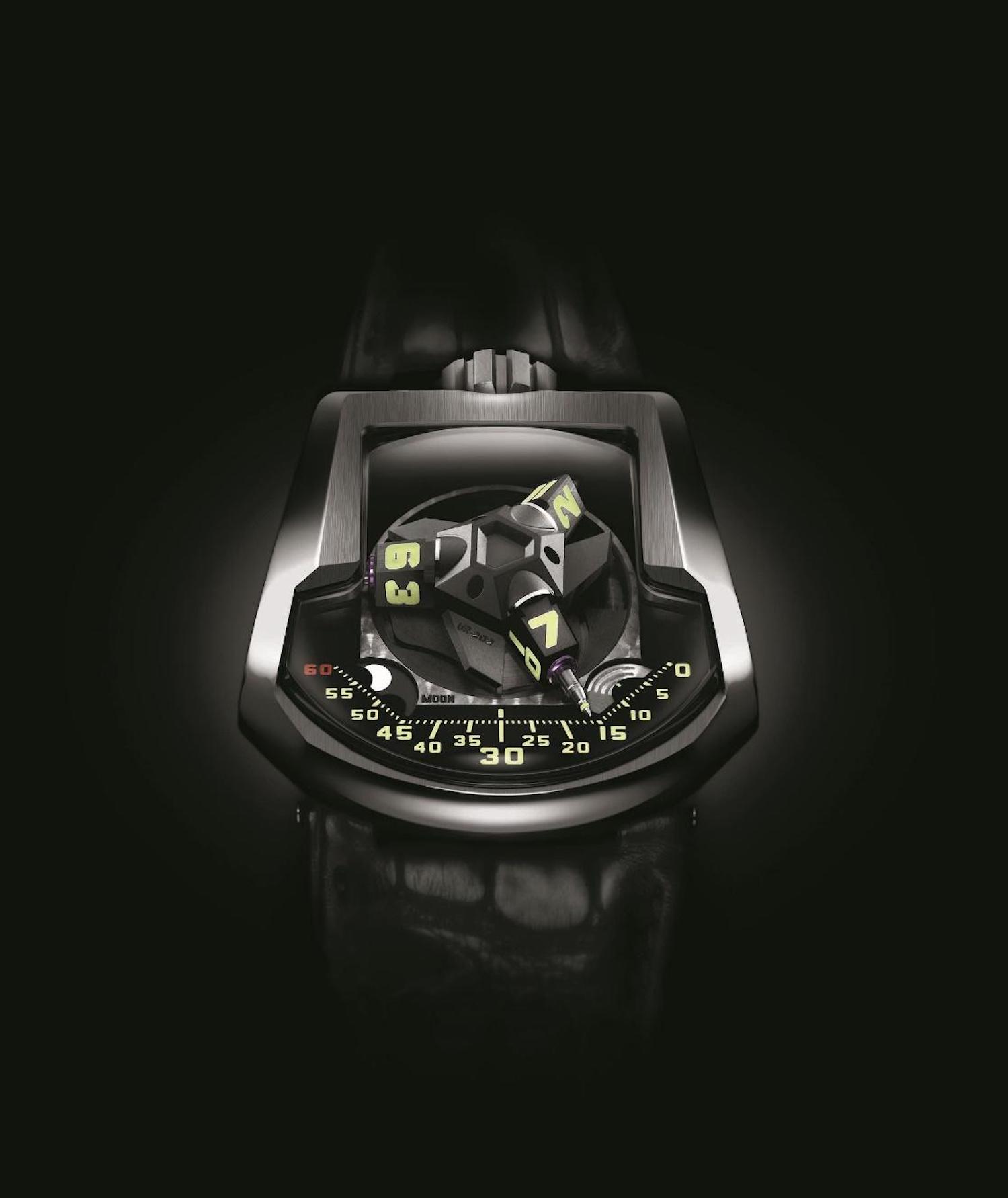 Among the most recognizable and striking-looking Urwerk watches ever made is the CC1 King Cobra from 2009. The UR-CC1 has two horizontal indications displayed by two cylinders: one for the jumping hours, and the other for the retrograde minutes. A vertical triple-cam operating a toothed rack, visible through a window in the side of the case, rotates the minute cylinder. From zero to 60 minutes, the minute cylinder rotates through 300°. On arriving at the 60-minute mark, the cylinder instantly, in a matter of just 1/10th of a second, reverses back to its original position, thanks to an extra-flat linear spring. The retrograde movement of the minute cylinder triggers the hour cylinder to jump one complete hour. 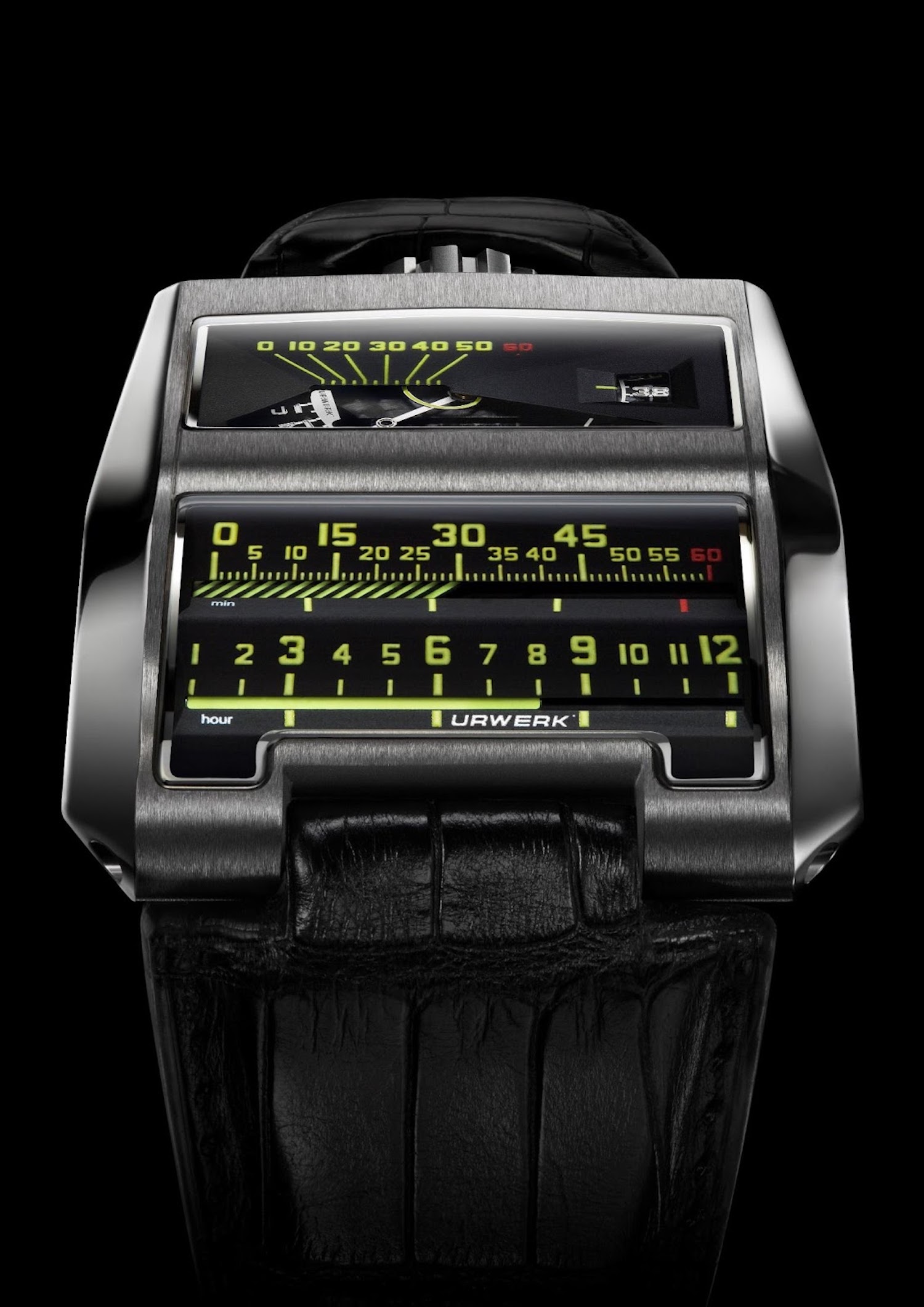 2011’s Urwerk UR-1001 was aptly named the “Zeit Device” — a true time machine, and the brand’s first pocket watch. It marked the passage of time in seconds, minutes, hours, displayed day/night, date, month, years, and 100 years — all the way to a monumental 1,000 years! 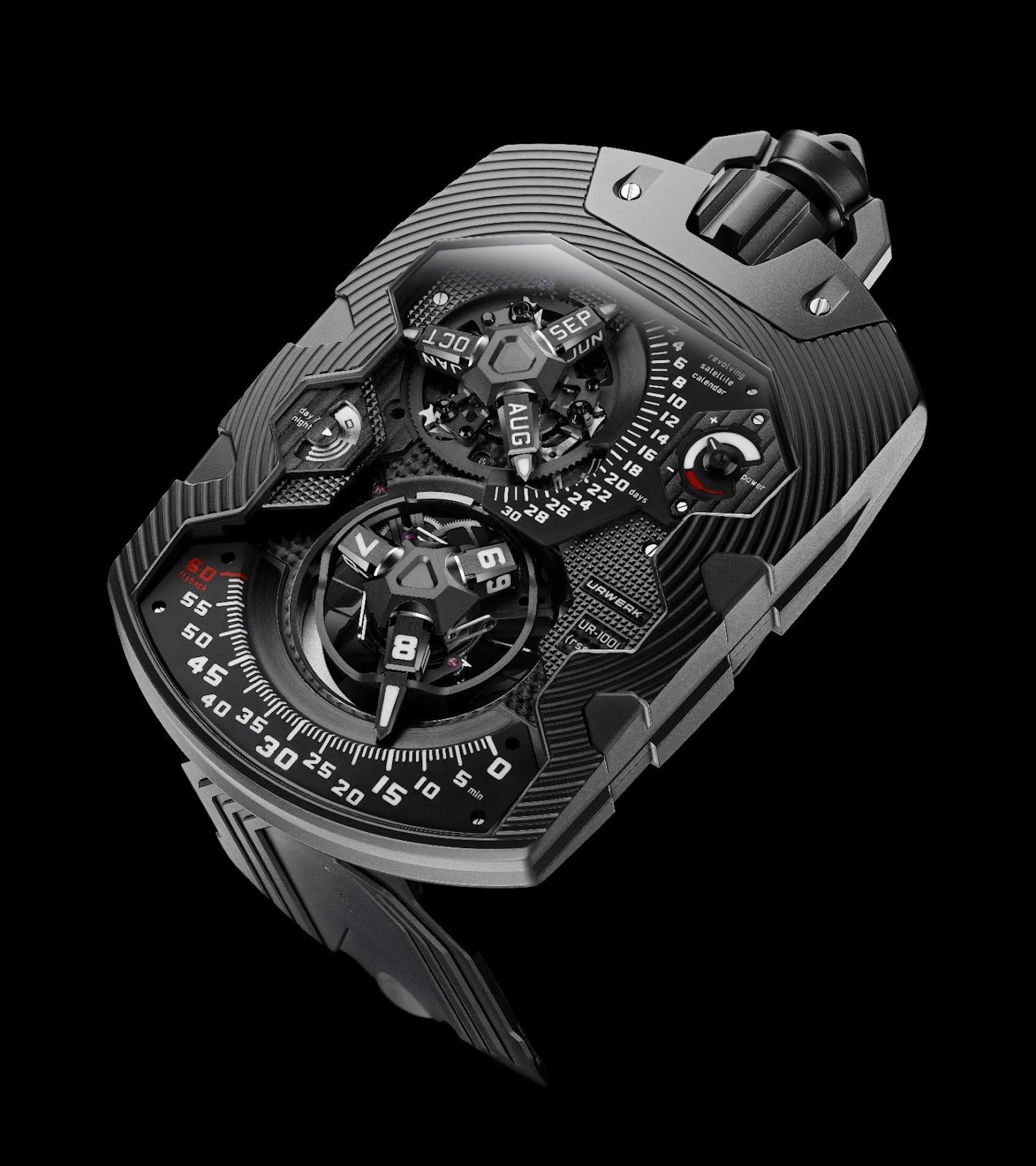 Raising the bar yet once again, the 2013 Urwerk EMC “TimeHunter” allowed the wearer to obtain a precise timing rate of their watch on demand, then adjust the timing of the watch based on that information, so that it would best suit their own personal rhythm. EMC stands for Electro-Mechanical Control, and it makes the world’s first precision mechanical watch in which the accuracy can be monitored and adjusted by the user. Notably, the EMC is a fully mechanical watch — the electronics have no effect whatsoever on the movement and are there to serve the purpose of monitoring the movement’s precision. 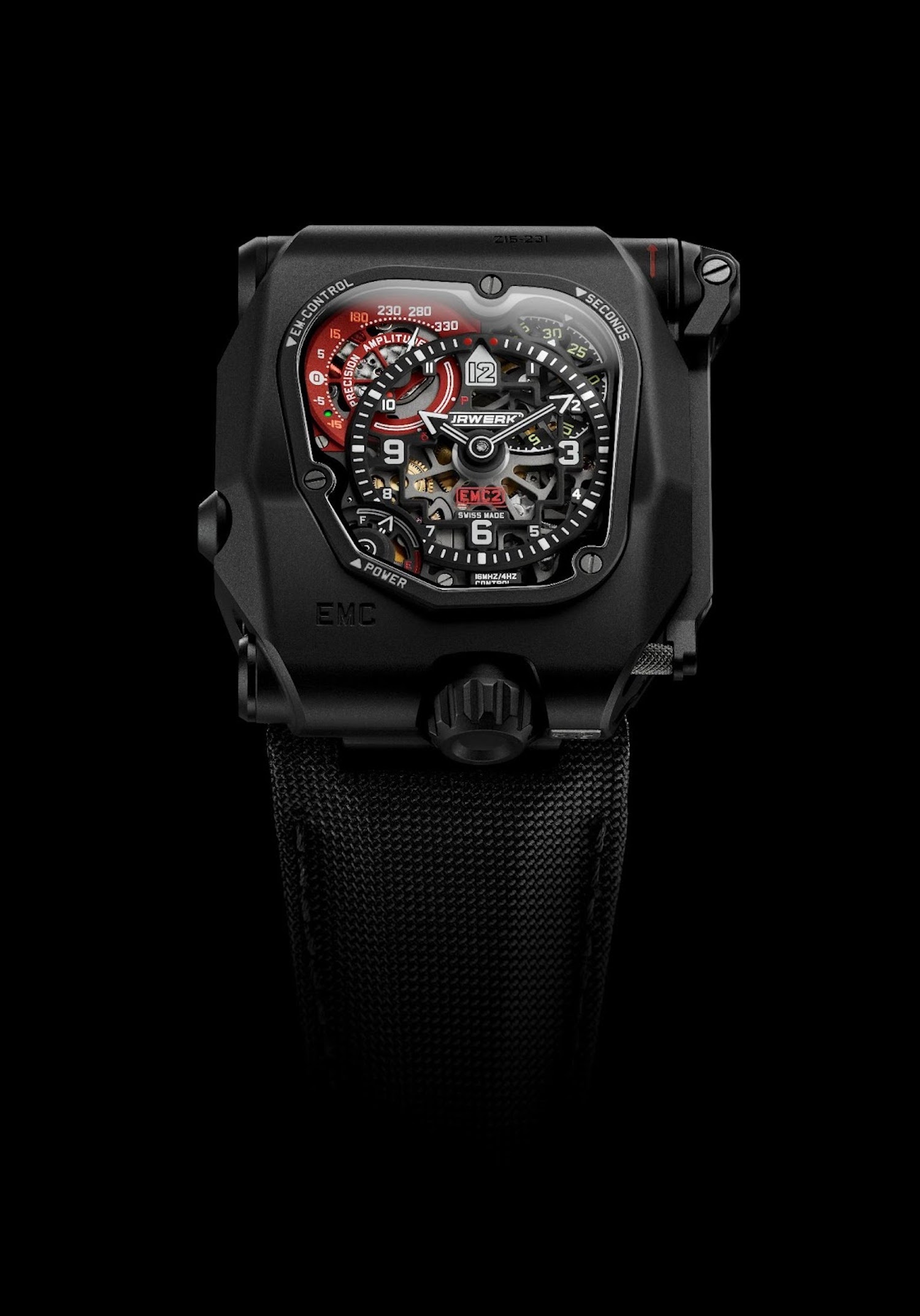 The 2017 UR-105 CT “Streamliner” featured a stunning octagonal case with a top shield that could be opened using a slide button. The case was beautifully finished in Art Deco style, with a level of interaction that simply never gets old. Open the shield, and the dial side of the UR 5.03 movement reveals itself, along with its four satellites, each with three lumed numerals for the hours. 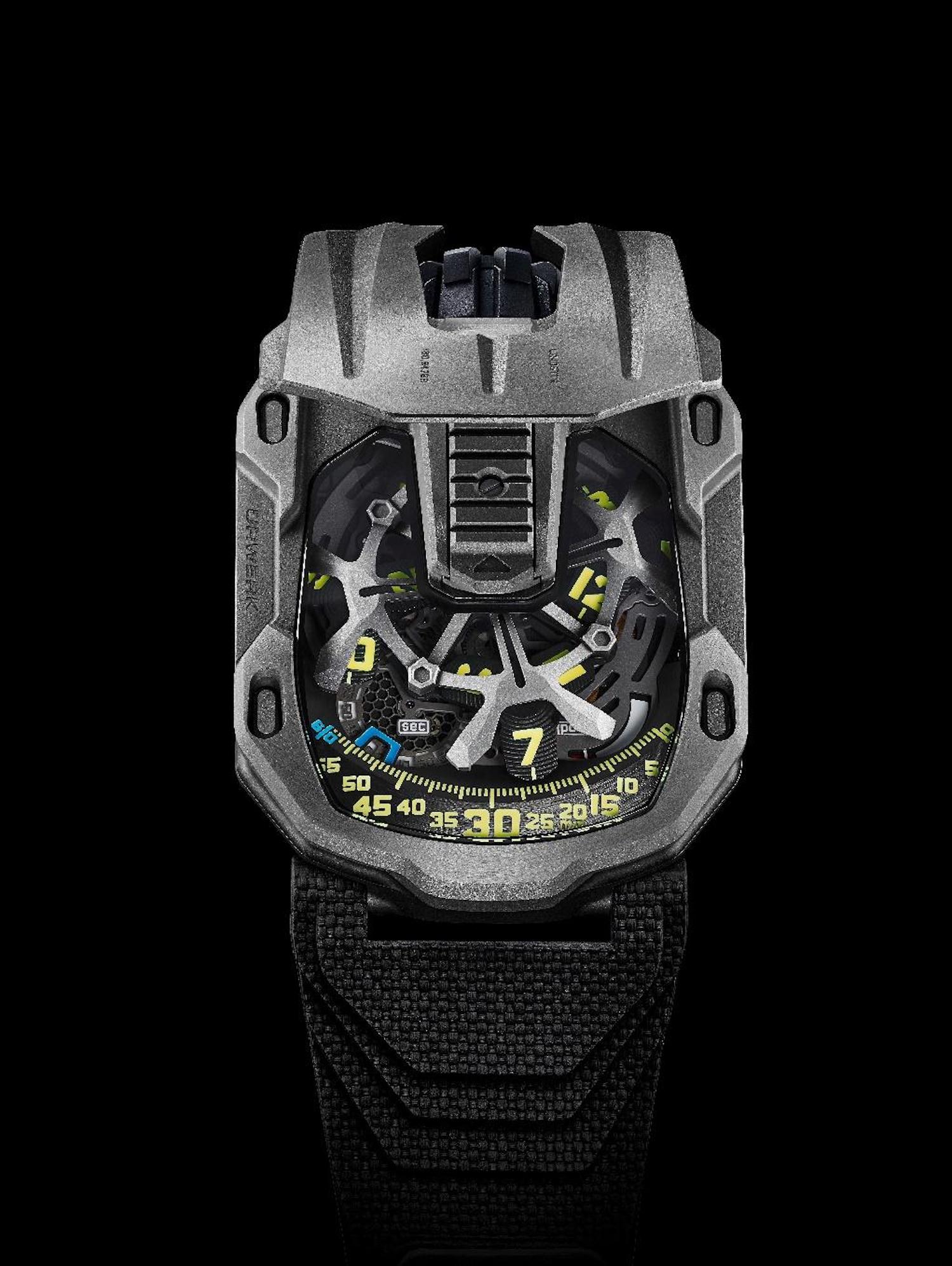 It was only a matter of time before the sci-fi-inspired Urwerk duo created a transforming watch. Enter the UR-T8 “Transformer” of 2017, where a series of precise actions unlock the case from its cradle, flip it over, and return it with a satisfying click to protect the time beneath a titanium shield. It is the biggest and most elaborate carousel configuration yet applied by Urwerk, with each arm supporting a satellite carousel bearing the four hour numerals. A complex planetary gearing transforms a tangle of wheels, screws, and jewel bearings into a meticulously orchestrated ballet. 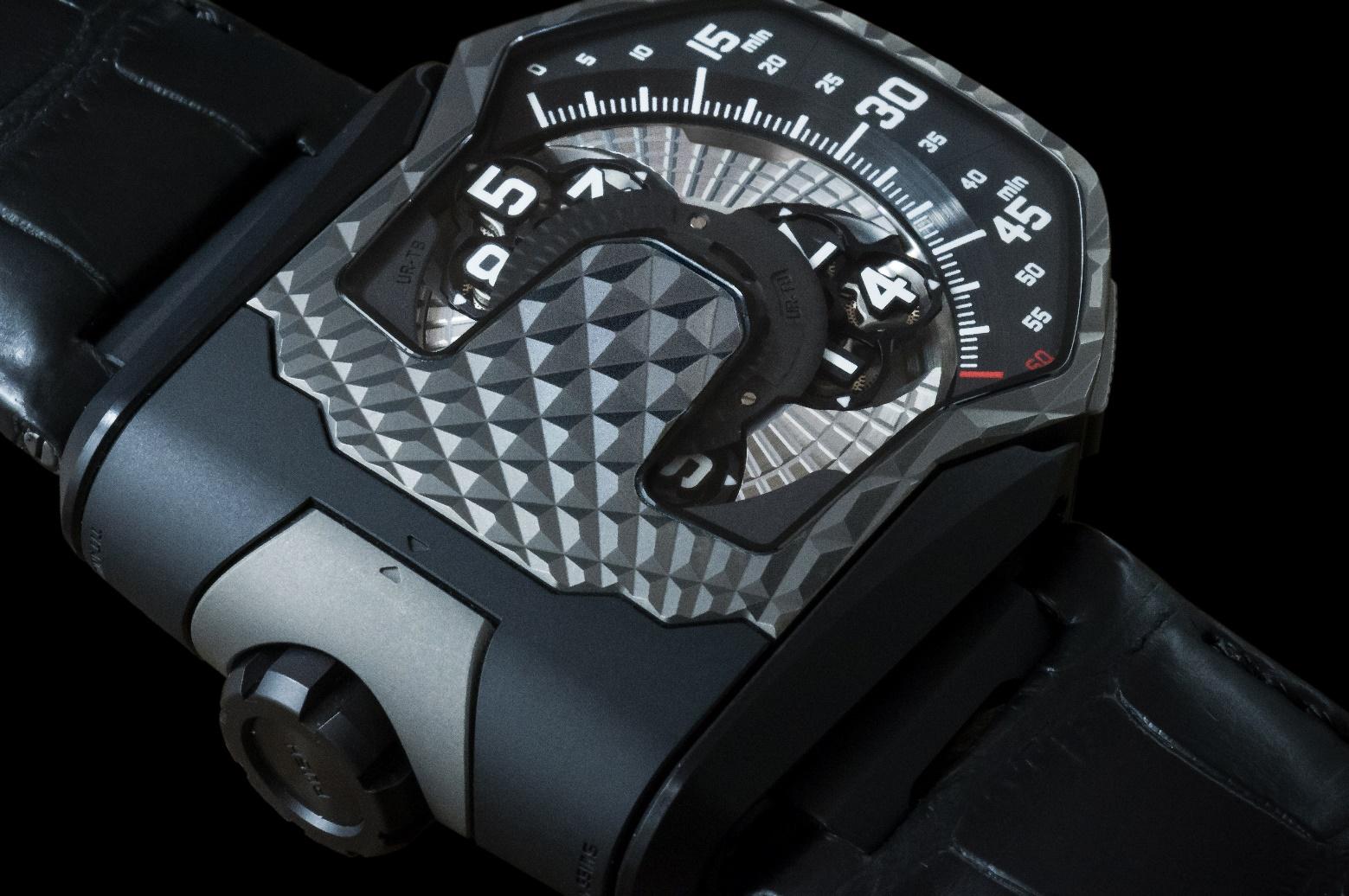 Forever fascinated with chronometry — that is, how accurately time is kept, and not just the way it is displayed — Urwerk developed the AMC “Atomic Mechanical Control,” a successor to the previously mentioned EMC. A unique achievement in the history of horology, the AMC has created a physical marriage between two approaches to chronometry. The mechanical watch comes with a breathtaking presentation box and an atomic clock base that serves as a reference time. Aptly nicknamed the “Monolith” and weighing in at around 35kg (80 pounds), this solid aluminum case hides a portable rubidium atomic clock developed together with SpectraTime, guaranteed to be accurate within one second in 317 years. The box can wind the AMC wristwatch, set time zones, set leap seconds, and synchronize with a GPS. 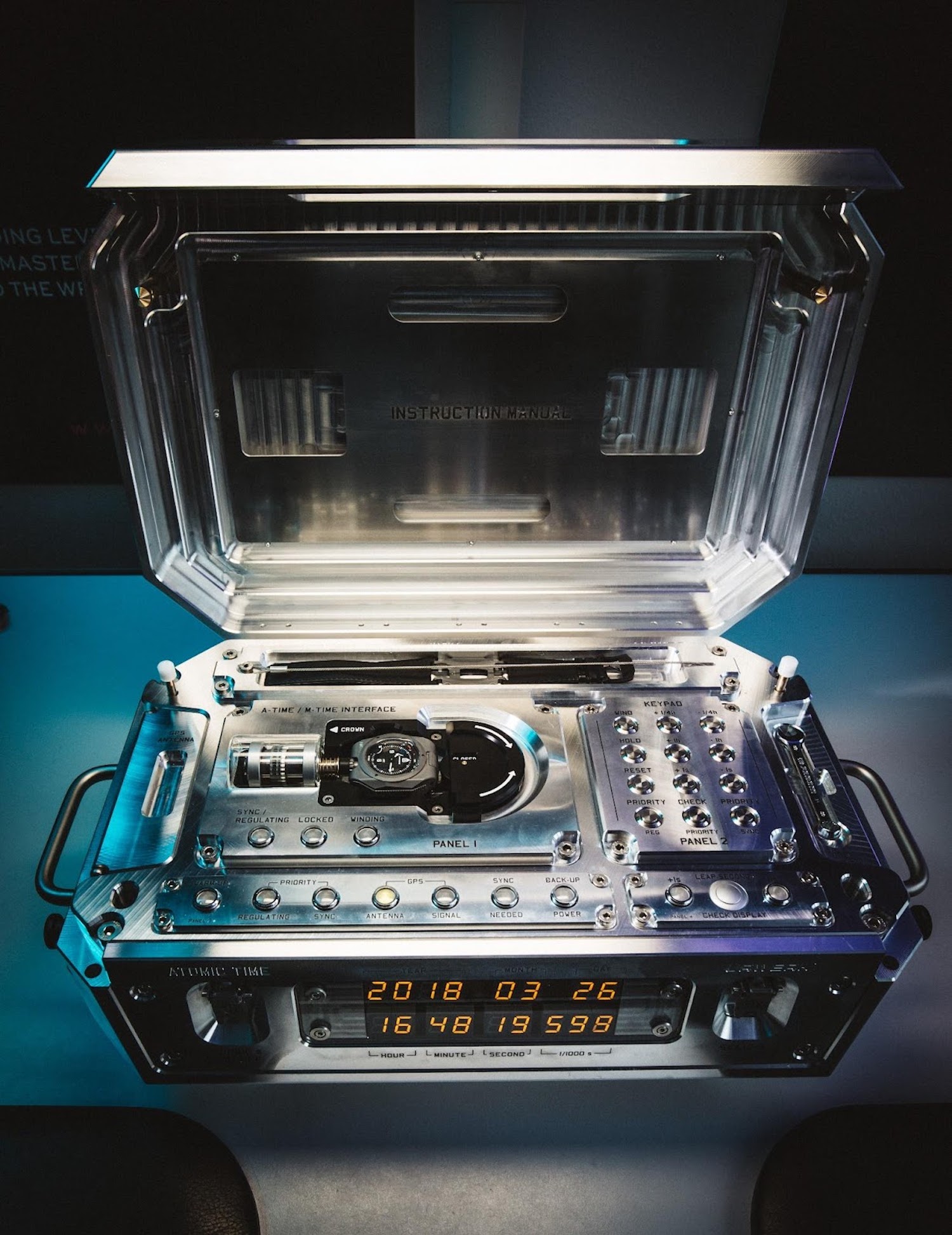 The Urwerk of today stays true to the principles that led to its success: A dynamic duo, forever inspired by the wonders of time and design — albeit now a quarter of a century wiser. From humble beginnings through atomic clocks and electro-mechanical pieces from the pages of science-fiction to satellite systems defying the limitations of mechanical movements, Urwerk has amazed collectors and watch lovers the world over — and there’s no chance of them stopping anytime soon. To discover more of Urwerk’s history and see its currently available creations, visit the brand’s website.