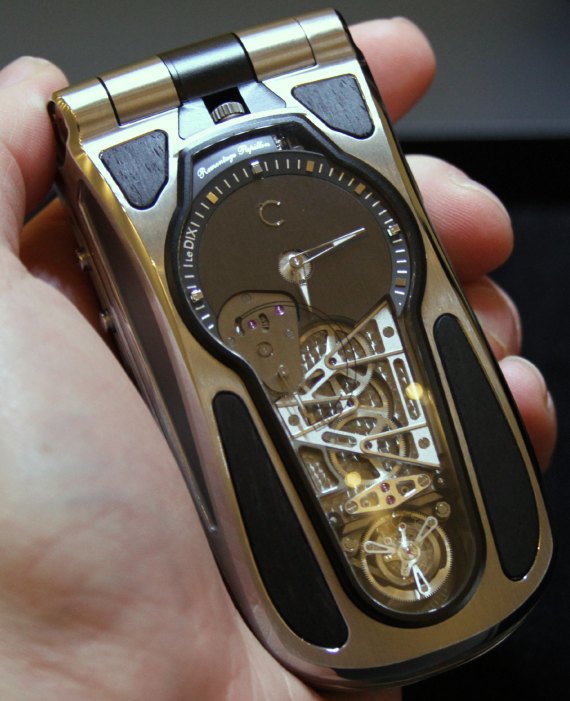 Things I need to do in life before I can purchase an over $300,000 luxury mobile phone: have a man servant, enjoy caviar on the moon, have human flesh offered to me (and politely refuse it), take my pet panda to the panda groomer, have eyeglasses made out of platinum for the hell of it, refuse beautiful woman for the night because night is already occupied with too many beautiful women, and have private helicopter pick me up from supermarket outing. Yup, that pretty much sums up the list of things required before a phone like this makes sense to me, but it does exist, and people do intend on buying them. Boy, I really haven’t lived have I? 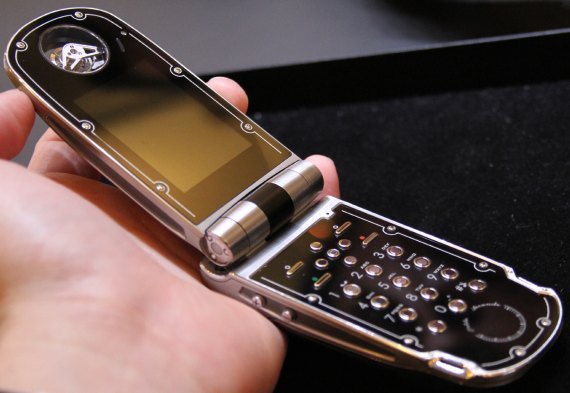 Here is some hands on treatment with what is probably the most expensive luxury phone on the market. In fact, the Celsius X VI II LeDIX is not quite get for sale yet, but will be soon. I originally thought the name of the phone was “Papillon.” As that “butterfly” name is actually on the phone and all over their website. Press materials actually have the name of the mobile phone as “LeDIX.” That is right, “LeDIX.” Pretty much going to suggest that they stick with “Celsius phone” for the name, for all intents and purposes. In a nutshell, it is a clam-shell style mobile phone that has a flying tourbillon based mechanical watch movement in the lid portion where the screen is. The tourbillon is located at the tip near where the ear speaker is (I bet you hear it moving while you are on the phone). The movement has the time, and a power reserve indicator. The crown for operating the movement is located near the  folding point of the phone. The LeDIX has a clever way of winding the movement. Each time you open and close the phone, the watch movement gets three hours worth of power wound in to the mainspring. The movement has a total power reserve of 120 hours.

The manner in which the movement was designed and implemented is pretty cool. Celsius wanted to make sure that using the phone in some manner worked with the mechanical movement – so the opening and closing part goes to that desire. The tourbillon and the watch movement is supposed to have some manner of shock absorption to protect it from the inevitable roughing around that it will experience. At the same time though, this is a phone you need to be much more careful with. Drop it and the watch movement part of it will likely be kaput. This is the same with all delicate mechanical watches.The movement has sapphire crystal over it and is in a water resistant enclosure. 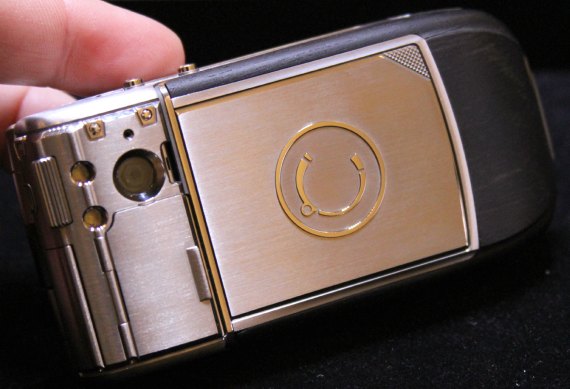 The LeDIX phone itself is quite heavy at 245 grams. It feels solid and is made from mostly grade 5 titanium (with lots of nice polishing). It also has ebony inserts. There is also going to be a limited edition (of 28 phones) model that is in black PVD titanium with carbon fiber inserts. The phone has about 600 mechanical parts – 330 of which are part of the watch movement. The rest of them are for cool little flaps and hinges. The battery compartment has a type of ejection system for the battery, and most of the ports are covered and opened via little buttons or levers. Celsius didn’t want there to be exposed plastic or alike on the phone. It is pretty cool to play with the little hatches and alike on the phone – none of them are ultra necessary, but neither is the phone itself. It goes with the uber-luxury gadget theme of this mobile phone.

How is one supposed to carry such a heavy and delicate phone? In a holster of course. I snapped an image of a Celsius representative showing off his holster, one of a few accessories that come with the phone. Try going through airport security and explaining that. The LeDIX will also come with a charging/docking station, and a hands-free talking device. The charger uses a proprietary design – I would have liked for them to just use USB. Oh well. 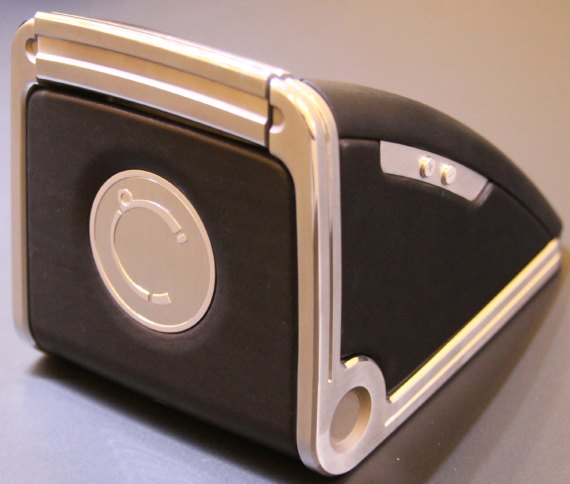 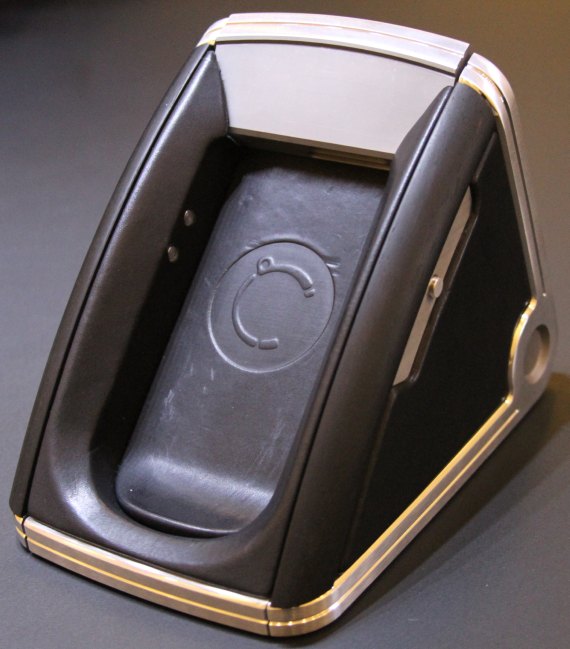 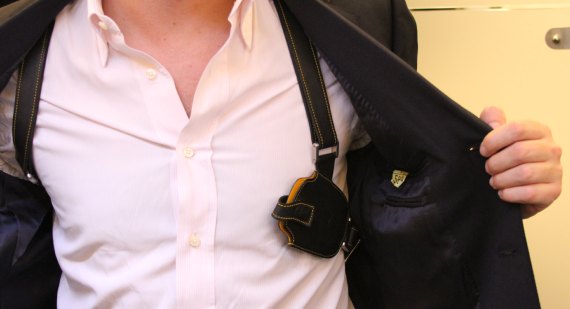 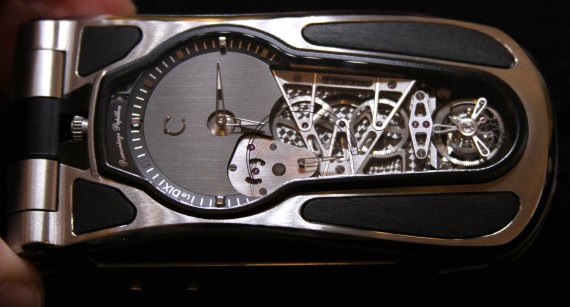 So the phone is heavy and high quality with an expensive watch movement. What about using it as a phone? It should suffice for that task. The unlocked device is a tri-band GSM phone developed with Sagem Wireless. The OS is pretty basic. Celsius sees the LeDIX as a companion or weekend phone. It is not supposed to replace your Blackberry. As such, they intend for the LeDIX to be used for calling, basic messaging, contacts, and the 3.2 megapixel auto-zoom with flash camera. Though the phone does have basic multi-media features such as a media player, and a web browser. The screen is a nice to look at 2.2 inch OLED. The phone is not a 3G device, and it really doesn’t’ need to be given what Celsius expects its owners to use it for. Battery life is about 3.5 hours of talk time.

Pretty much all the accessories are going to be specially made for the LeDIX phone. Lots of high grade metal, leather, and a feeling that you are better than others. Serious, in a world of such fast changing technology, why is more opulent and decadent that a several hundred thousand dollar mobile phone? And not a diamond to be found (though I am sure that is coming). The phone sits in an odd place in the ecosystem of mechanical devices. It isn’t particularly high tech, nor does it have the most modern of styles. It is really a unique hybrid device that attempts to merge the worlds of luxury mechanical watches with mobile phones such a bit closer than they have ever been before.