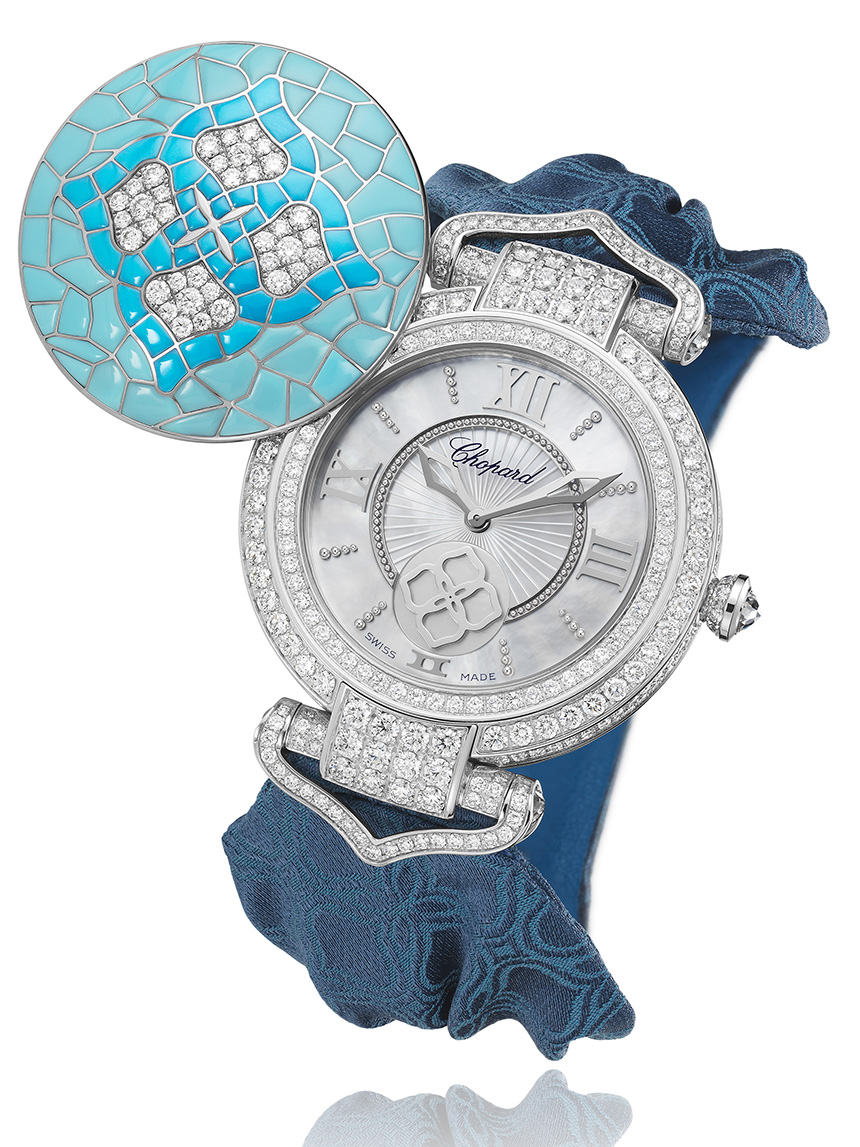 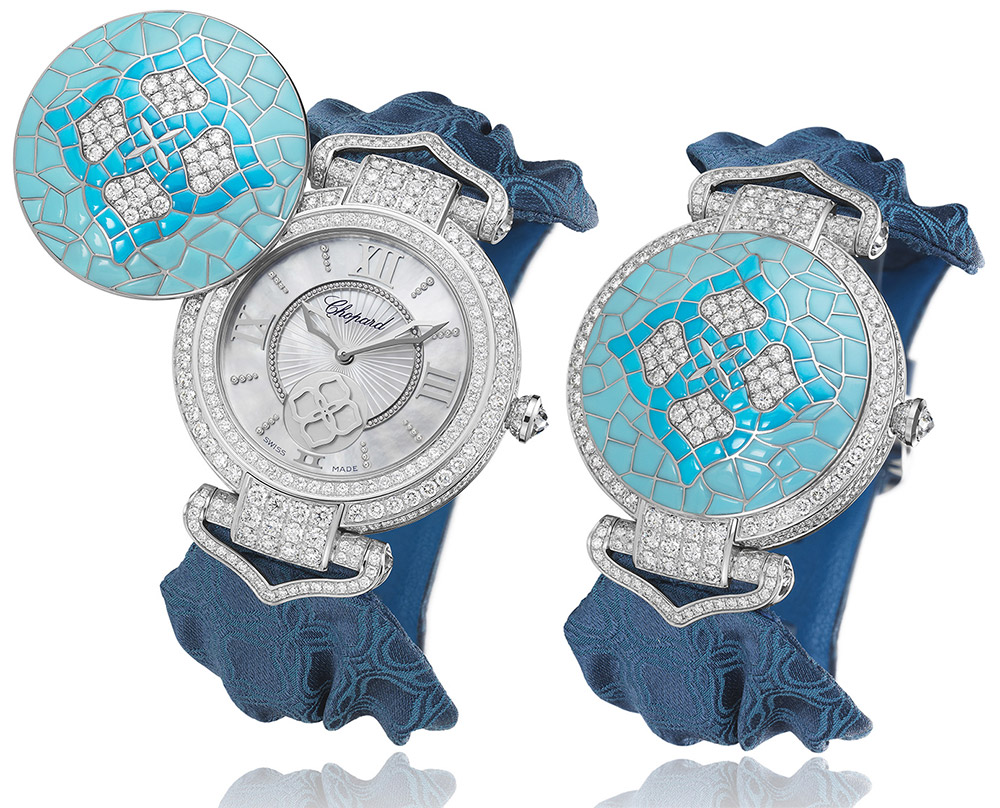 Chopard is as famous for its glamorous red carpet jewelry collections and over-the-top jewelry watches as it is for its men’s complications and in-house movements. Co-president Caroline Scheufele is a longtime patron of the Cannes Film Festival and designer to the stars (Chopard jewelry has a long winning streak of adorning Oscar winning actresses), and one of the era’s most extraordinary designers. The company’s new tradition of creating a special jeweled watch within its Imperiale collection, is therefore welcome, as it categorizes a collection of watches, like the Chopard Imperiale Joaillerie, that are likely to be highly collectible. 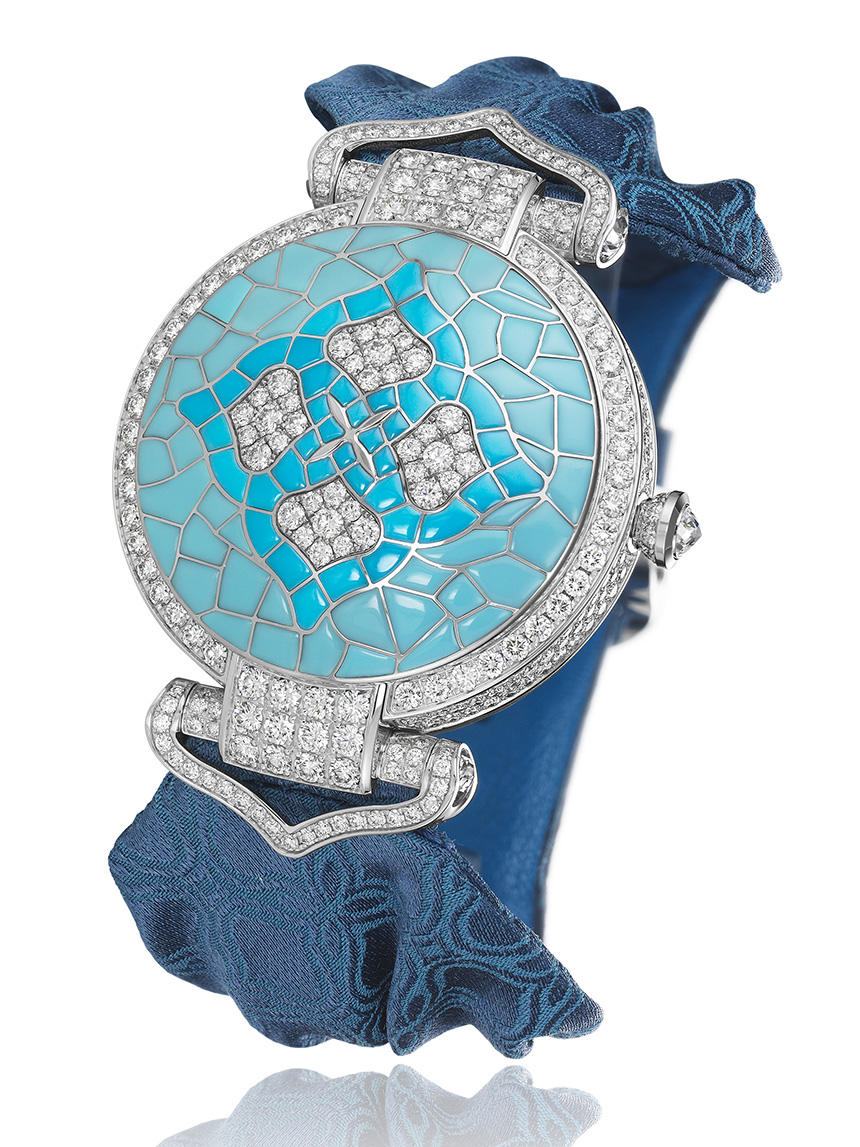 The cover of the Chopard Imperiale Joaillerie.

Chopard – like Cartier, Faberge, and Graff – is firmly rooted in the world of high-end jewelry, and it gives them particular credibility in the art of high jewelry watchmaking. Chopard has introduced some memorable and expensive jewelry watches over the past decade, usually one-off pieces and often to celebrate a milestone. Last year, Chopard started a new tradition, introducing a high-jewelry watch within its Imperiale collection. In keeping with the regal theme of the line, each jewelry piece will celebrate the design codes of a particular empire. Last year, it was the Coffret de l’Imperatrice (The Empress’s Jewelry Box), which commemorated the exotic aesthetic of the Byzantine empire, with shapes recalling the lancet arches of Moorish architecture. It’s a shape that mirrors the signature motif in the Chopard Imperiale collection, representing the tips of combat daggers used by monarchs and Roman emperors. It also resembles the insignias of rulers that are traditionally embroidered on wall hangings and cushions.

This year’s high jewelry piece is the Chopard Imperiale Joaillerie which celebrates the ancient Mayan civilization of Peru, using turquoise, a gemstone abundant in that country. The Incan civilization was the largest empire in pre-Columbian America. Three gems are cut as inlays and set, mosaic style, alongside sparkling diamonds in a pattern that recalls pre-Colombian mosaics. The Chopard Imperiale Joaillerie is constructed in the style of “secret watches,” with a cover that swivels to reveal a dial underneath. The cover is entirely set with custom-cut turquoise in various sizes and two matched shades, interspersed with diamonds in a pattern that resembles a mosaic. The pattern of the mosaic composition reflects the signature element of the Chopard Imperiale collection. The motif is also repeated in the shape of the lugs, the central hands, the small seconds indicator and the pattern on the strap. The unique damask strap differentiates the watch, not just from other standard models but from other jewelry watches. The luxurious fabric calls to mind imperial robes and gowns, with its hint of embroidery and rich weave. Also optional is a turquoise colored alligator strap!

Turquoise has been prized as a gemstone for thousands of years. Jewelry set with the gem has been discovered buried in ancient Egyptian tombs dating back to 4,000 BC. Chinese artisans were carving it more than 3,000 years ago. According to its mythology, turquoise brings good fortune. As a talisman, it was set into daggers, sabers, and the bridles of horses. It is found in the Earth’s most dry and barren regions, including the mountains of Peru. The Incans used it to decorate ceremonial masks and other decorative objects. Today, turquoise is the birthstone of December and the gemstone of the 11th wedding anniversary.

The outer dial of the Chopard Imperiale Joaillerie is mother-of pearl, overlaid with Roman numerals and hour markers, and the inner dial is decorated with a sunburst guilloché pattern, representing the Inca dynasty’s fascination with and worship of the sun god. The Chopard Imperiale Joillerie is unique, but others can be made to order. It is an exceptional piece, combining chronometry, gem-setting and miniature mosaics all in one collectible package. This kind of high end watchmaking for ladies falls into the category of timepieces that will fetch high prices at auctions in the future. It is valuable from a chronometry, design, and cultural point of view. 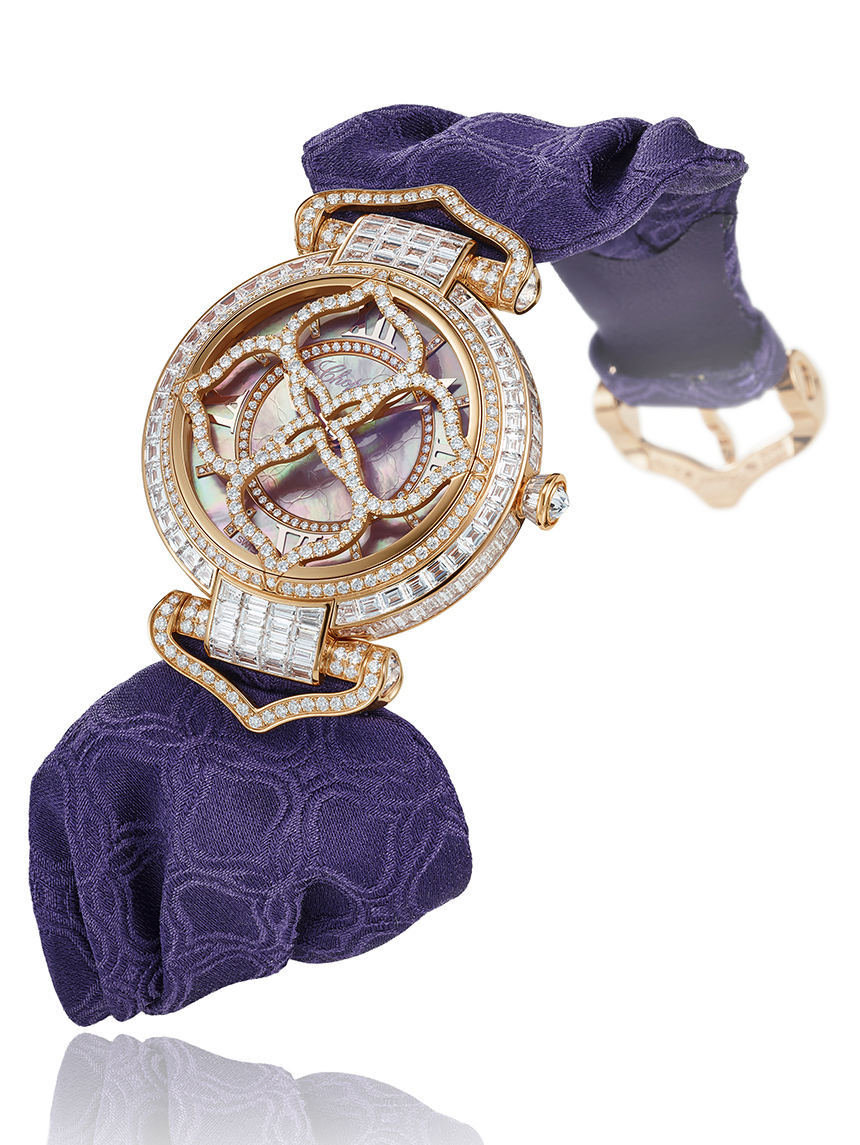 Last year’s Imperiale high jewelry watch was the Coffret de l’Imperatrice (The Empress’s Jewelry Box). The first in a new series from Chopard.

The watch even has an ecological aspect. The case is made of 18k white gold that is classified as Fairmined, a label that guarantees strict respect for the rules of economic, social, and environmental development in the mining process. Fairmined gold standards cover everything from the management of toxic substances to proper health and safety as well as employment standards.

The case, bezel, crown and lugs are set with diamonds, and the lugs are set at each end with four pear-shaped diamonds. The watch contains a movement from Chopard’s elite L.U.C family of calibers. The automatic L.U.C 96.12-L was designed, developed, and hand-decorated entirely in the Chopard manufacture in Fleurier. It has a 65-hour power reserve. The case is 38mm wide and 12.5mm thick, and features an exhibition caseback. It is water resistant to 50 meters and is priced at US$162,790. chopard.com