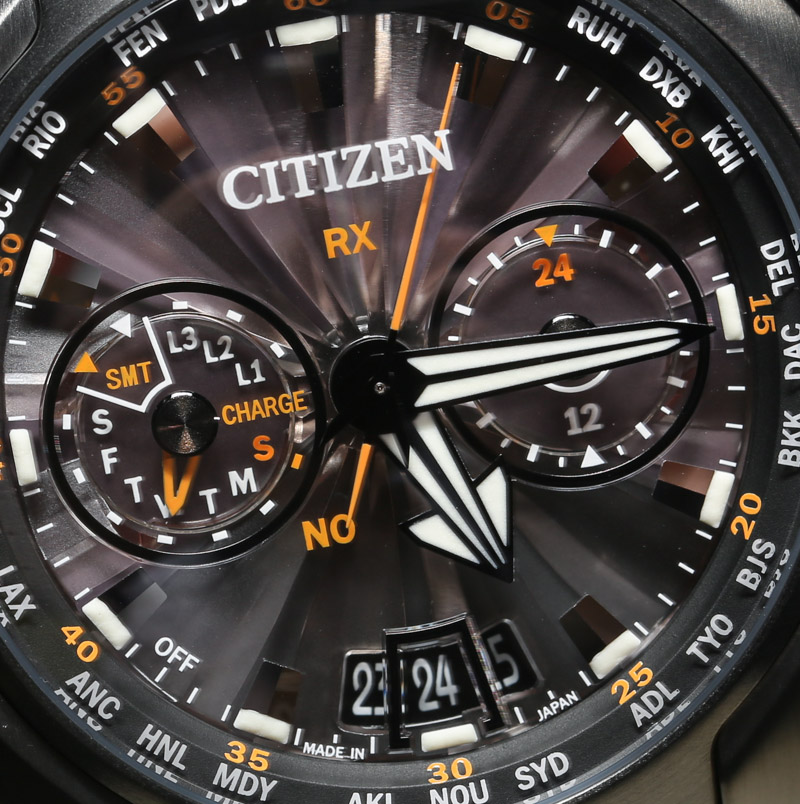 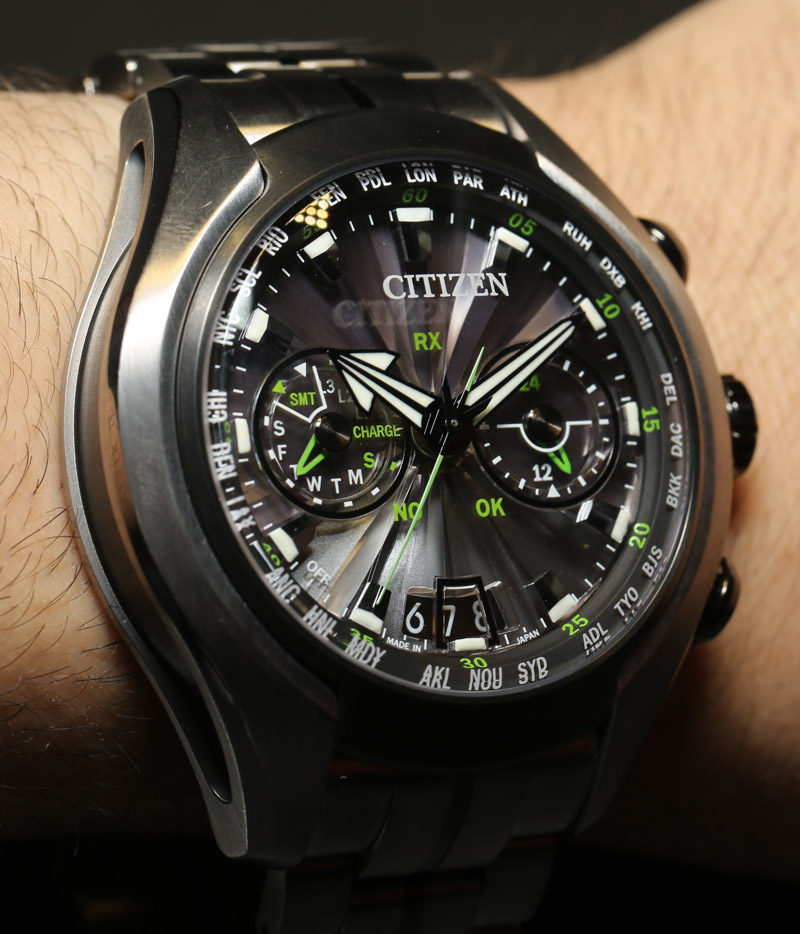 What is “Air” about it? We don’t really know, but the GPS satellite signals certainly move through the air. In a nutshell, the new Satellite Wave-Air has a more mainstream look, better technology, and a much friendlier price. Citizen explained to us how the Calibre H909 quartz movement was improved in the Wave-Air watch. Of course it contains Citizen’s light-powered (to charge the battery) Eco-Drive technology. The improvements center around the watch’s interaction with the GPS satellite signals. As it is, the watch must be manually set to receive the signals. This is due to battery power constraints. Citizen’s tests have found that automatic syncing is too burdensome on the battery on average. That isn’t a bit deal however, as to sync with the time no matter where you are on the planet, all you need to do is push one of the pushers. No fancy menu diving is required (thankfully!). 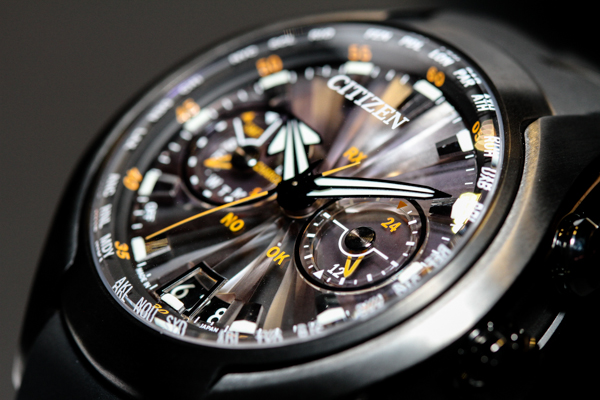 The original Citizen Satellite Wave took about 60 seconds to connect with signals on average and Citizen claims that the Satellite Wave-Air only takes about 20 seconds. They claim other improvements in terms of receiving signals usability features making the entire system a lot easier to live with. Citizen’s goal is to roll out the satellite syncing technology to replace the existing atomic clock radio signal syncing technology available in many of their watches. Why? Because satellite signals are available all over the world as opposed to specific regions where atomic clock signals are available. The idea is to have accurate time and calendar data no matter where you are in the world. 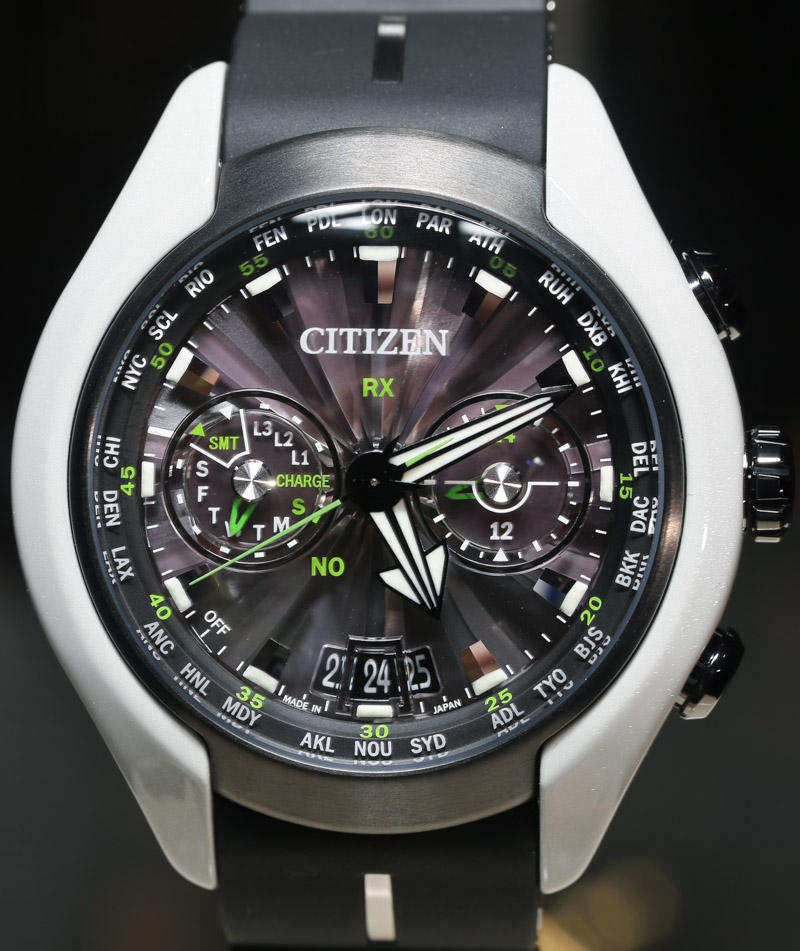 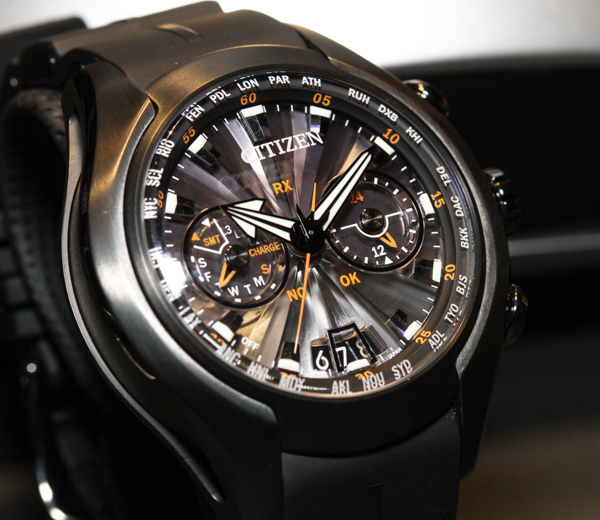 From a features perspective, the Satellite Wave-Air has the time, perpetual calendar information, and a world time function. That of course is in addition to the features that allow you to connect with GPS satellites. You also have the ability to check the battery charge level. Default calendar information on the dial includes the date and day of the week. You also have a 24 hour AM/PM indicator. The periphery of the dial contains city codes for the world time features.

No doubt you’ll need to examine the user manual to understand how to read and operate all of the satellite synchronization features. How it works is pretty simple though. You need to manually set the watch to receive satellite signals, and you should be located in a place where the watch can receive signals (ideally outside). The watch then looks for I believe three different signals before updating the time. This can be done as often as you like, but most people will simply want to update the time one a month or so, or after traveling into a new time zone. 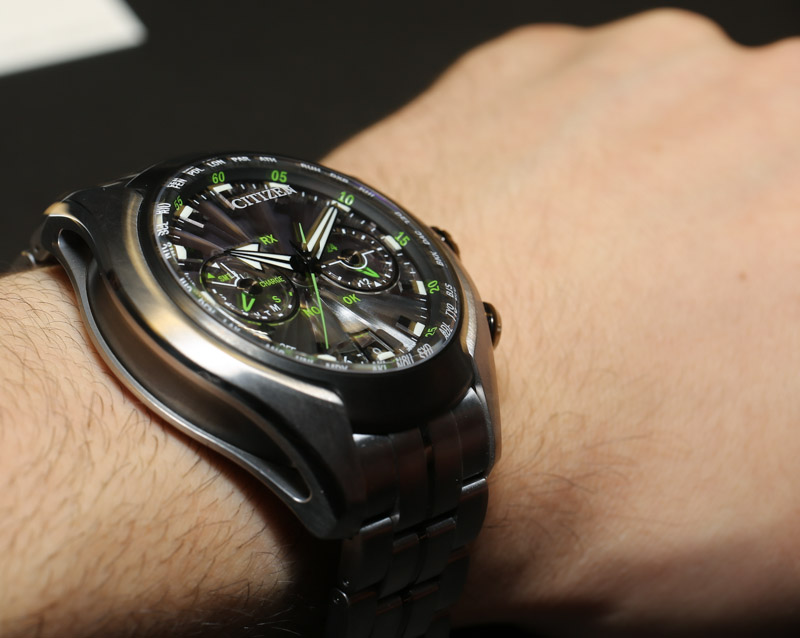 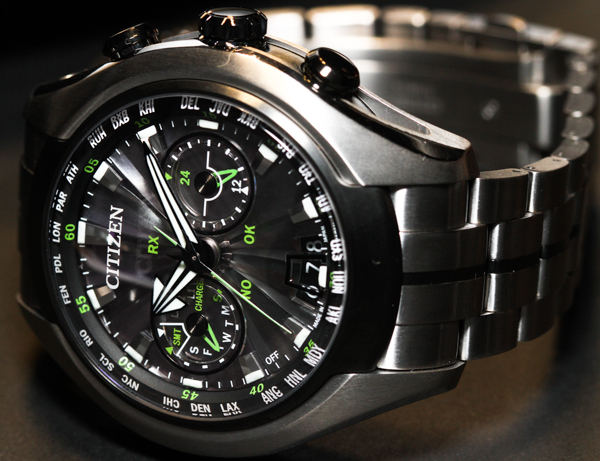 The ability to connect with satellites is very impressive and still a neat feature for a wrist watch. Seiko’s new Astron watches offer the same types of features, and currently the two main companies offering quality GPS enabled watches such as this are Japanese Citizen and Seiko. Of course there are some fitness watches and alike that can connect to GPS satellites, but they don’t offer the same type of battery life and solar charging as these two. As a daily wear watch, the Citizen Satellite Wave-Air and Seiko Astron are your two best bets.

For 2013 both brands have released new models of their flagship GPS watches, and at similar prices. It will be interesting to see who sells more given the similarity of the products. History has shown that it will mostly be a marketing battle, and in the US at least, Citizen is the clear winner as they dedicate much more money to advertising. 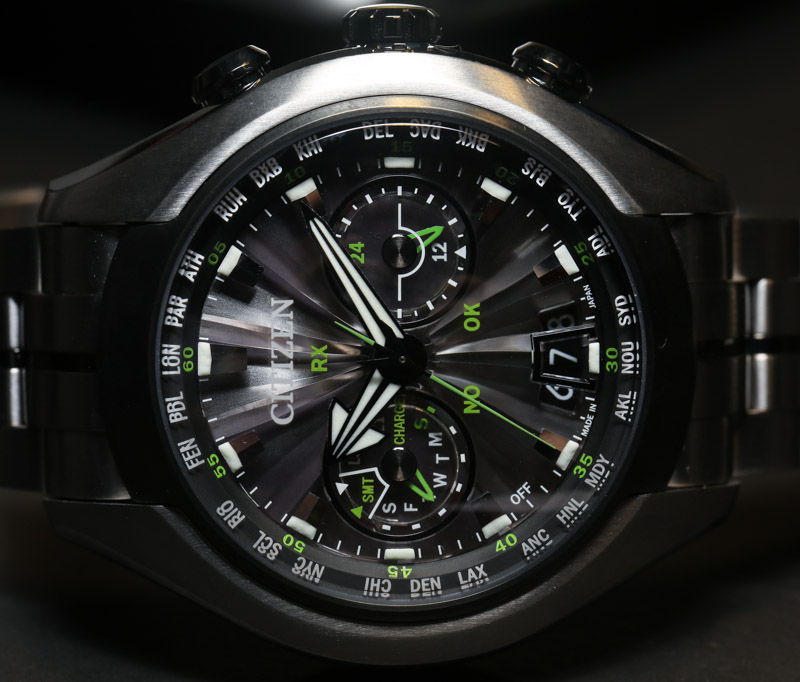 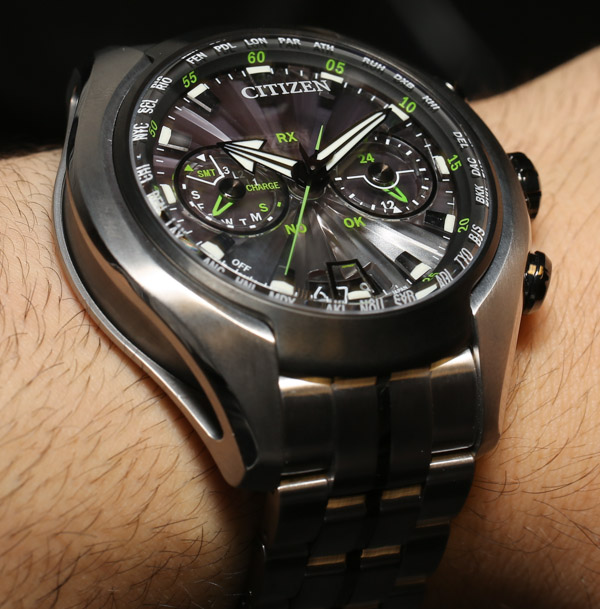 The new Satellite Wave-Air watches are clearly more mainstream in their design compared to the original Satellite Wave with its peripheral green spiral on the dial and lateral green inserts in the ceramic case. The crystalline-style face is still unique, but it is designed to look interesting and allow light to pass through it. Nevertheless, the hands and indicators are all very easy to see. Further, the subdials are mostly easy to read and with a few color styles (green and orange coming to the US), there are a bit more options than just green.

If I recall correctly the case is about 49mm wide, but extremely light in titanium. There is also a DLC coated titanium model on a rubber strap. Outside of the USA there will be additional versions available (such as the limited edition of 500 piece white “pearl” painted titanium case). Light, the contours of the case also prove to be quite comfortable. On the titanium bracelet it makes for a handsome, modern look. I look forward to hopefully offering a full review of the new Citizen Satellite Wave-Air watch soon. Perhaps the best news for lovers of the technology is that the price, while not low, is lower than the almost $4,000 price of the original. At between about $2,500 – $2,600, the Citizen Satellite Wave-Air watch will find a home on a lot more accuracy-loving wrists. citizenwatch.com