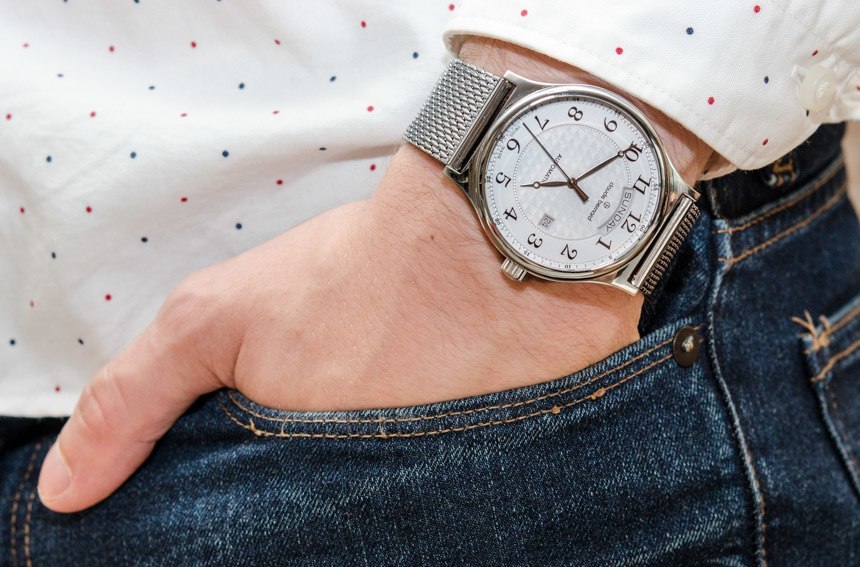 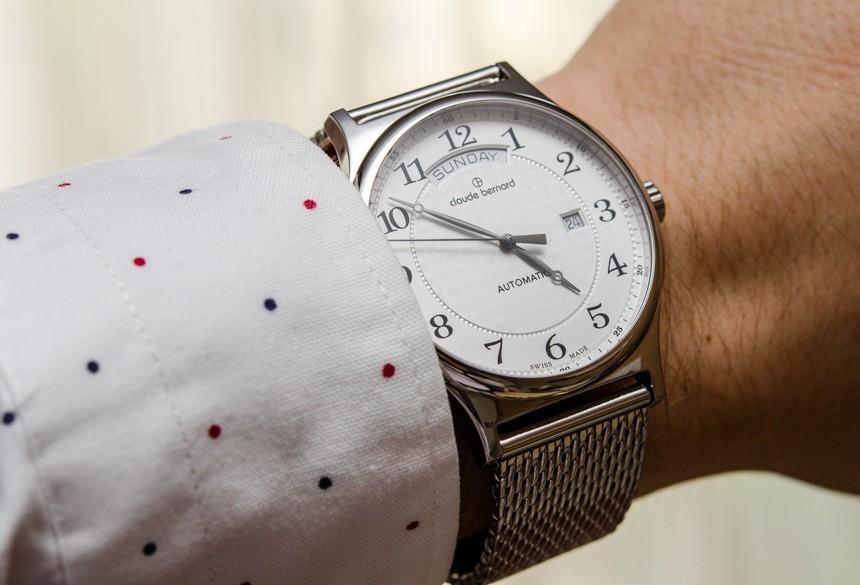 Large, classic, affordable. It is no secret that there are plenty of watch buyers out there today looking for a timepiece that fits these three requirements; and the Swiss-made Claude Bernard 83014 3M AB is a watch that promises to meet all of them. The Claude Bernard 83014 3M AB is quite possibly the worst name for any watch that I have ever heard of – and we have confirmed with Claude Bernard that in fact this is the “name” of the watch – and it belongs to the brand’s more fortunately named “Sophisticated Classics” line. Despite the laughably uncanny name, the concept of a slightly more affordable, Swiss-made, classically styled watch is very intriguing indeed, and so I was excited to see how my first encounter with Claude Bernard and their 83014 was going to go down. 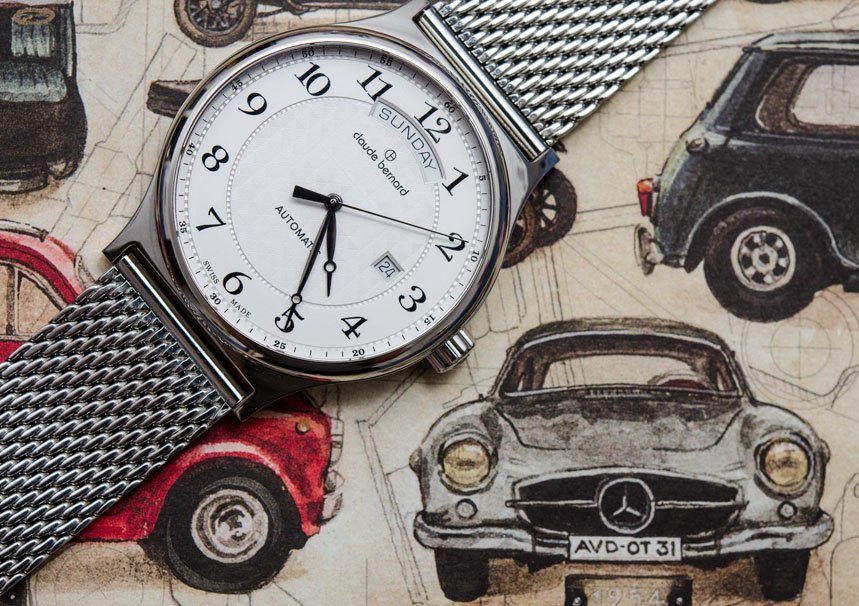 Before we begin discussing the watch itself in more detail, let’s take a brief moment to acquaint ourselves with the brand itself. Claude Bernard was a Swiss watchmaker who established his company in 1973, in a small town along the Swiss Jura mountains. Today, the brand belongs to Victor Strambini, who also owns Edox Swiss Watches, meaning that Claude Bernard is more or less a sister company of Edox. In essence, with Claude Bernard, we are not looking at a brand that boasts extensive history – but that is not necessarily a bad thing. The concept behind the brand is a rather contemporary one, as it aims to offer Swiss-made quartz and mechanical watches in the highly competitive 150 to 800 dollar price segment. 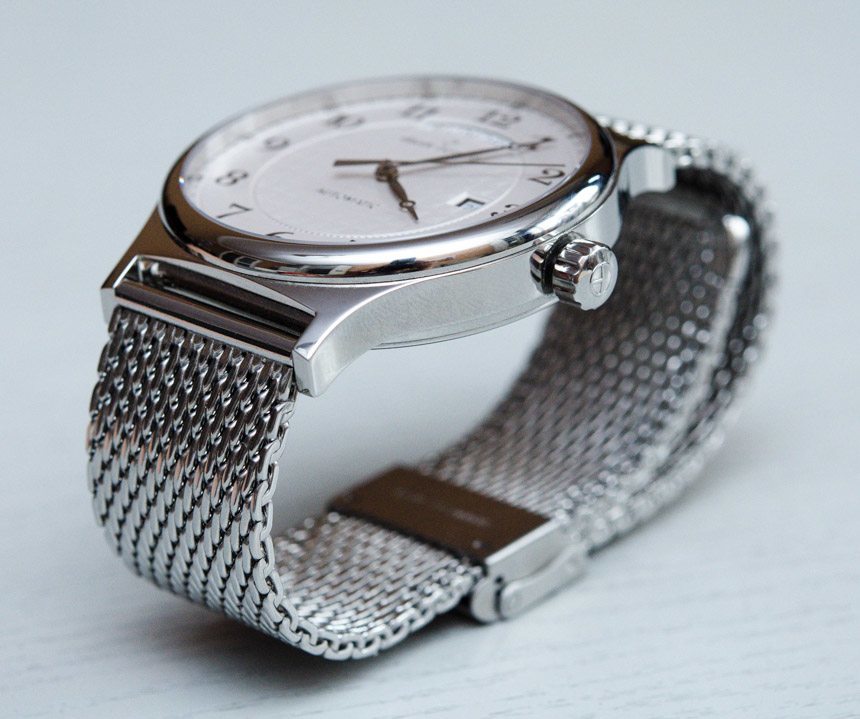 Contradicting the competitive pricing, all Claude Bernard watches bear the “Swiss Made” designation on the dial, as all of them incorporate Swiss movements and are assembled at the company’s manufacture in Les Genevez. With that said, some other parts of the watch – likely including the case and the bracelet – are sourced from Asia to keep prices down; but that is a practice much more common in the Swiss industry than one would dare to imagine. Anyhow, the requirements of the relevant Swiss legislation are met, i.e., over 60% of the costs of the watch is manufactured in the country. 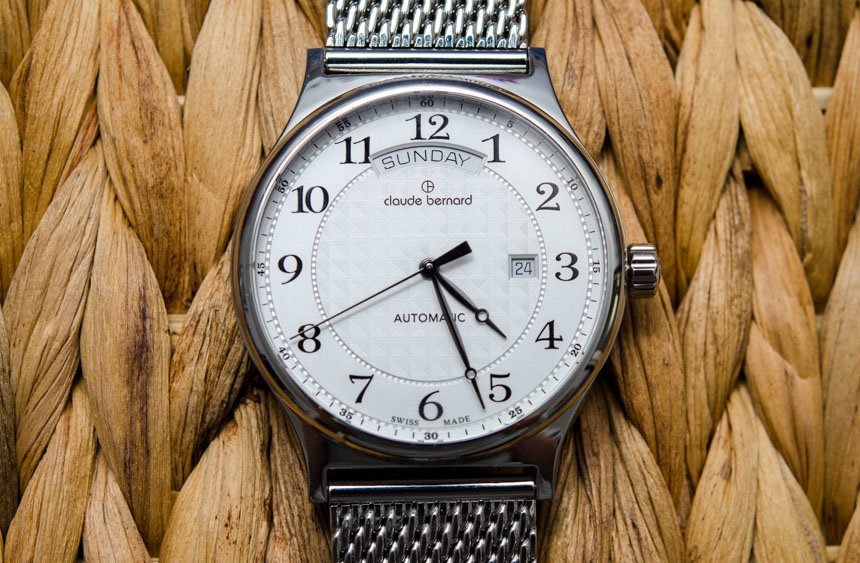 We mentioned earlier that the Claude Bernard 83014 3M AB watch belongs to the so-called Sophisticated Classics collection of the brand – with the other two lines being the Dress Code that comprises ladies’ watches, and the Sporting Soul that features, well, watches with a sportier aesthetic. The Claude Bernard 83014 arguably is one of the more handsome models of the brand, as this particular version features a sleek, 42 millimeter wide stainless steel case, large, easily legible Arabic numerals, elegant pomme hands and a “guilloché” pattern in the center of the dial.

That certainly is a tasteful selection of classic design elements – and yet, they do not seem to work together in perfect harmony. Let’s begin with the case: even with my rather skinny, 6.75 inch wrist, I have never before had problems with wearing a 42 millimeter wide watch – until this time. Due to the extremely slim bezel, and to a lesser extent to the all the polished surfaces, the Claude Bernard 83014 wears larger than its actual case size would suggest. That is bad news for those who argue a dress watch should be around 39 millimeters at most; and good news for those with a larger physique, who have been looking for a more generously sized dress watch that won’t look petite on their wrists. 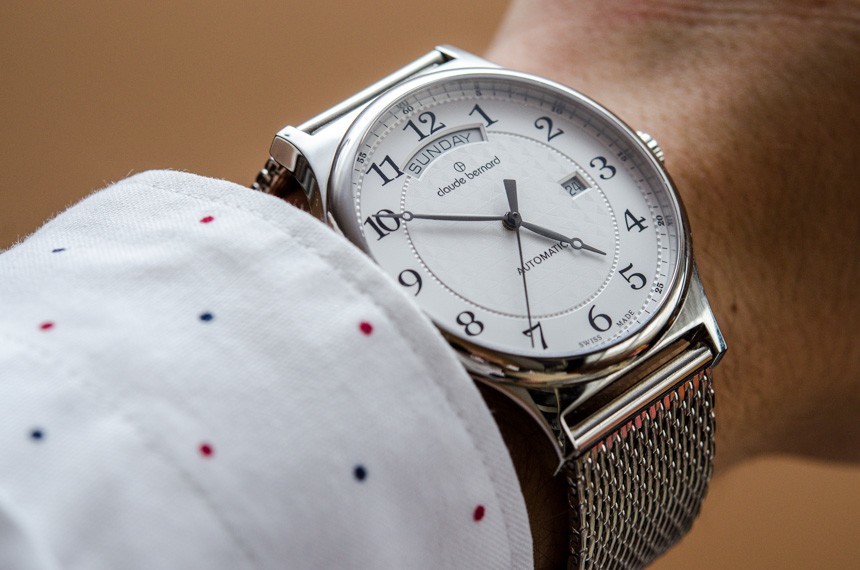 One of the more basic requirements for any watch out there, regardless its size, concerns the balance of proportions, i.e. the relation between the sizes of the different design elements. In this particular case, what makes the watch look and wear even larger than its actual size would suggest is the set of skinny and just a tad too short hands. The discreetly styled, off-white colored dial looks great and manages to avoid most design “mishaps” (such as indices cut in half or compromised legibility).

And while the dial is nicely done, with its all-black indices, very subtle “Clous de Paris” pattern in its center, and nicely executed apertures for the day and date indications, there are one or two “shortfalls” that keep it away from perfection. Despite the numerous more subtle details of the dial, what attracts more attention than the large, curvy indices are the two “railroad” style hour and minute tracks that embrace the black numerals. When viewed directly from above, they tend to blend into the dial, while from most other angles, they stand out for their added depth and highlighted texture. 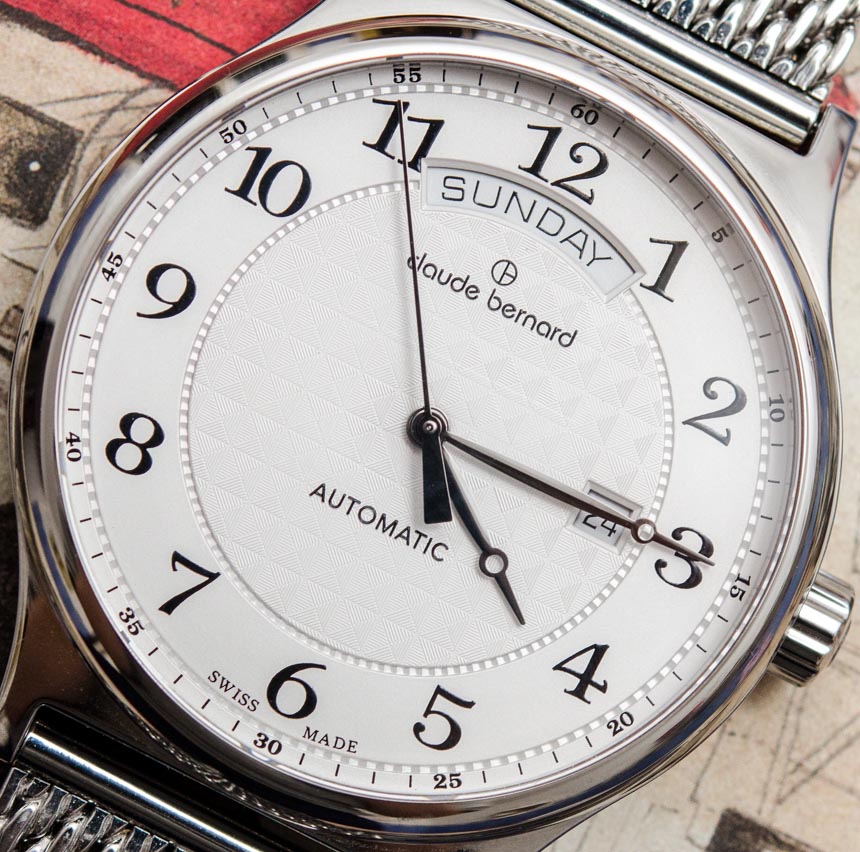 The problem these two circular patterns create is that none of the three hands reach their respective tracks, with the hour and minute hands falling short noticeably. Therefore, not only does the watch wear bigger due to its slim bezel, but the insufficiently sized hands further emphasize that: and with a design as clean and relatively simple as that of the Claude Bernard 83014, I found that this literal shortcoming bugged me even weeks into having the watch.

You see, the major challenge that classical, more simple aesthetics impose is linked to their relatively small number of design elements: while minor mistakes tend to get lost in a “robot turd” design (to quote John’s phrase from the HourTime podcast), as the countless different angles, screws, subdials, texts and hands make them more difficult to spot. However, when it comes to more discreet and simple designs, even minor inconsistencies are generally easier to spot – and tend to be more annoying. 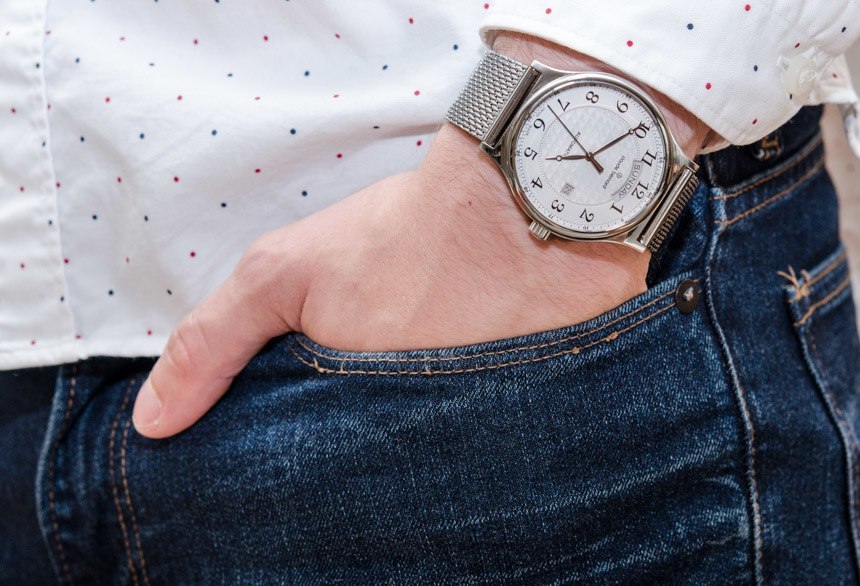 But one might say that is a small price to pay, and for the most part, I would agree. While the 22 millimeter wide, skinny-looking lugs further emphasize the large, white dial of the watch, the steel mesh bracelet renders the Claude Bernard 83014 suitable for formal, as well as for what is often referred to as “smart casual” attire. I understand that the usual concern with mesh bracelets is about their tendency of pulling arm hair, but in this case the tight weave of the mesh eliminates that issue just about entirely.

The bracelet can be freely adjusted without the use of a dedicated tool; all it takes is a tweezer or a knife to lift up the latch and move the clasp around. Speaking of which, while the clasp is secured by its double-latch system, it takes a bit of practice to be able to put it on quickly – especially, when the length of the bracelet is set to be “just right”, offering a tighter fit with less excessive length. With that said, once the watch is on, it is comfortable to wear, while its slim profile renders it a superb option for formal wear. 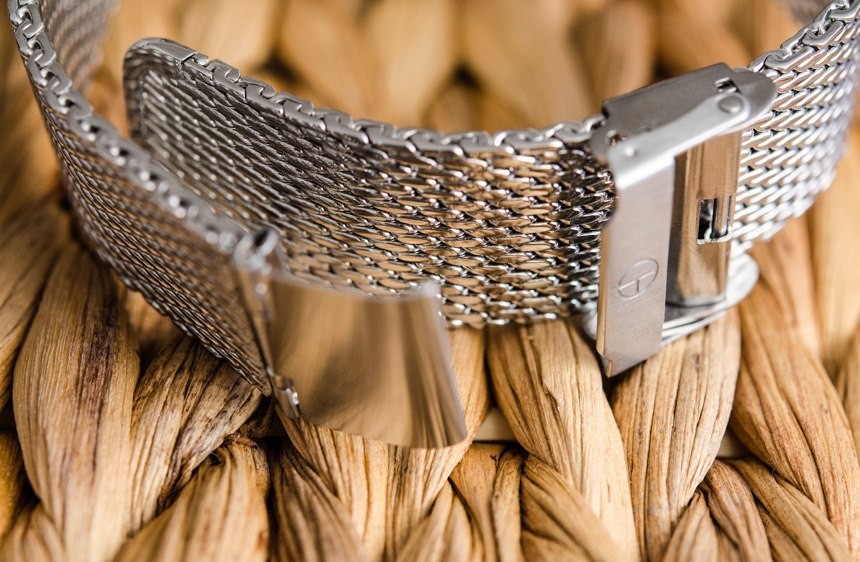 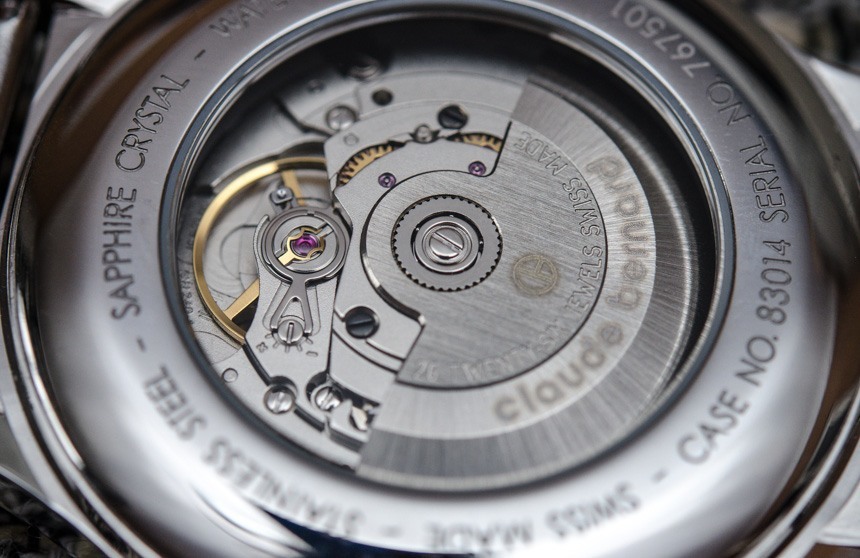 Inside the Claude Bernard 83014 is a Sellita SW240-1 automatic movement that is visible through the rear sapphire window. For a number of years now, the SW200 family of movements has meant a popular and reliable substitute for ETA’s ubiquitous 2824 caliber, and there is good reason for that. The SW240-1 runs at a more modern 4 Hz (28,800 vph) rate and offers a 38-hour power reserve. This particular watch ran perfectly smoothly and kept good time by gaining just a few seconds each day. When it comes to added functionality, beyond its traditional three-hands layout, the SW240 offers a day and date indication, both adjustable from the crown – no need for inconvenient pushers set into the side of the case there.

Exposed through the sapphire caseback, this particular movement is a rather industrial-looking little machine, dressed up with a brushed finished and laser etched Claude Bernard rotor. And while I admit that movements with automatic winding need not be wound manually, from time to time I do enjoy winding the watch that I am wearing. With that said, despite the smooth winding feel, the much too small crown, unfortunately, made winding the watch way too inconvenient. 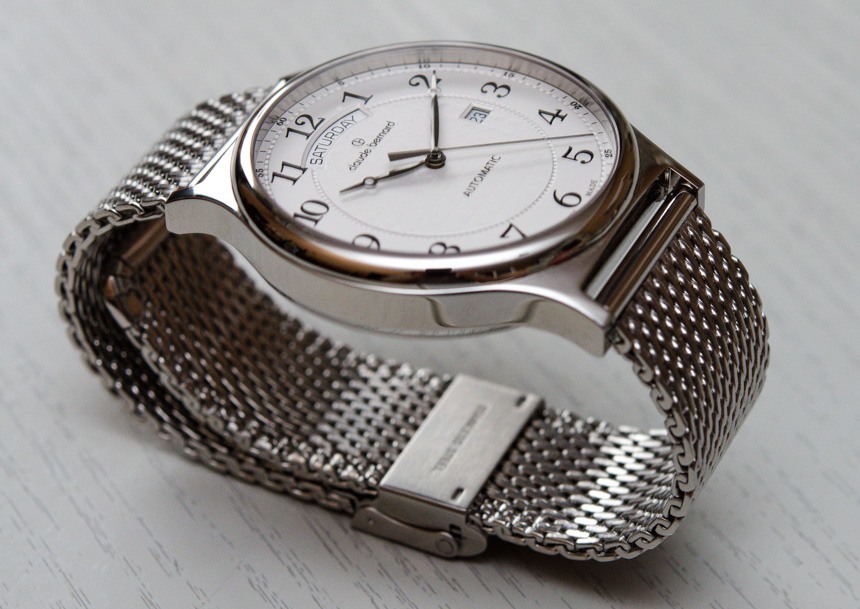 In essence, the Claude Bernard 83014 3M AB is an elegant, comfortable and reliable watch, and with a price tag of 735 Swiss francs or about $785, it is among the more moderately priced Swiss Made dress watches. While a few minor details make it fall short of being a more perfect offering, the Claude Bernard 83014 nonetheless is a recommended alternative for those looking for a larger, classically styled watch under $1,000. claudebernard.ch

Necessary Data
>Brand: Claude Bernard
>Model: 83014 3M AB
>Price: $785 (for ref. 83014 3M AB)
>Size: 42 mm
>Would reviewer personally wear it: Occasionally, on a black leather strap.
>Friend we’d recommend it to first: The one into larger watches and classic design elements, looking for Swiss Made on a budget.
>Best characteristic of watch: A mixture of timeless design elements, useful functions, good legibility and a “trendy” size.
>Worst characteristic of watch: A few small details that could have been done better weaken the overall appeal, including the size of the hands and the crown.