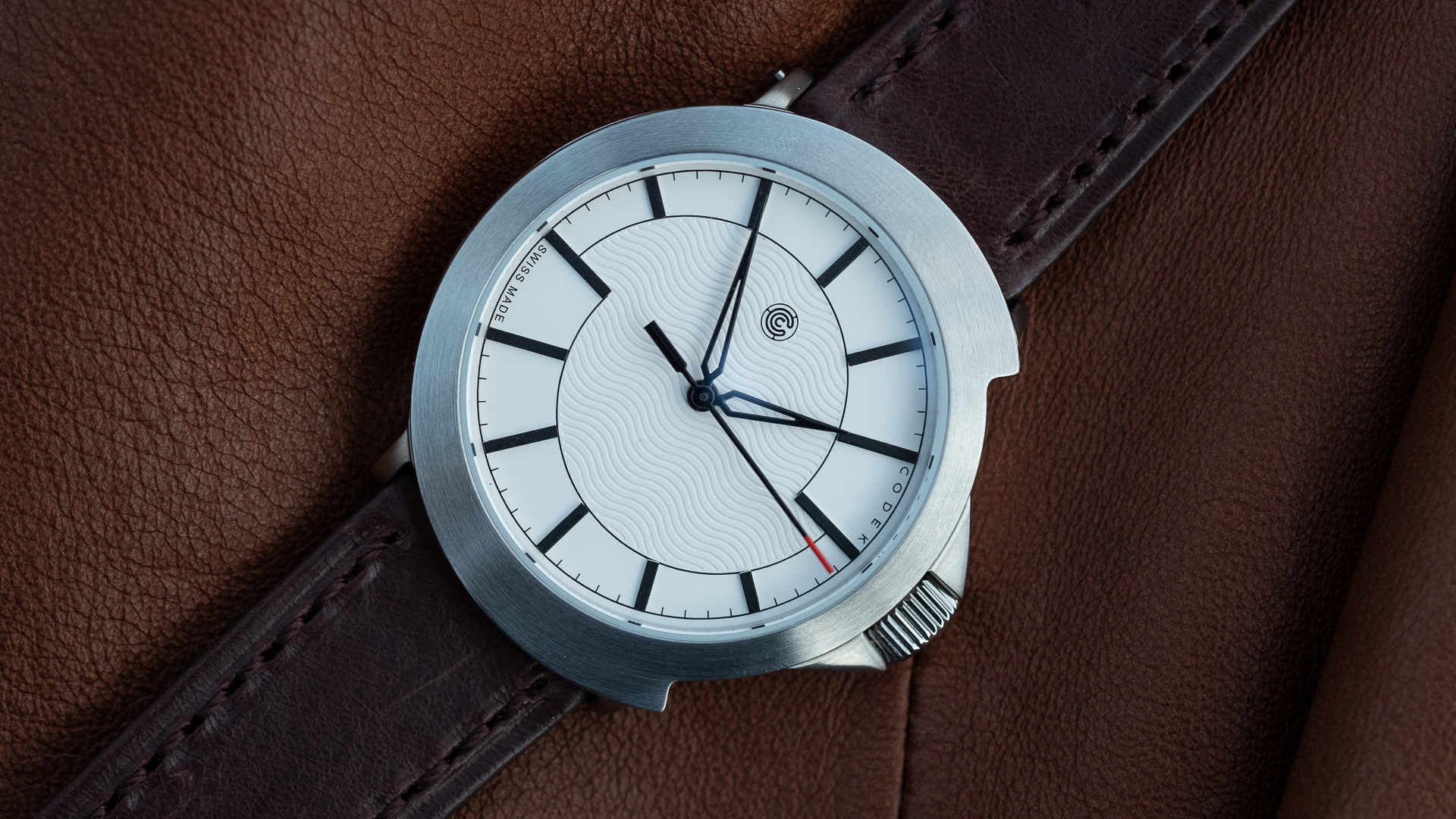 In the landscape of independent watch brands, I believe it is important for those brands to find a way to stand out among the crowd. Some brands do this with a marketing narrative, others do it with a focus on complication or toughness, and others still focus on really great design – often it can be a combination of all three. I think that Codek, while being a relatively new face around the watch world, offers an interesting perspective on their freshman piece. The Codek Spiral first reminded me of the Hamilton Ventura, for the obvious reasons that they both have asymmetrical cases, but Codek has a lot of reasoning behind their design of the Spiral. Anchored in traditional French watchmaking, the Spiral is modeled after the hairspring inside of a watch. While I find the watch unusual and for that reason interesting, I’m also leaning towards the feeling that designing a watch to represent an element from classical watchmaking might be a little…on the nose? Regardless, what Codek has done that I like is source quality components and assemble their watches well, with a few exceptions. With all that said, let’s get into the specifics of the Spiral. It’s not hard to see at first glance that it’s the case that sets the Spiral apart from its peers. It’s vaguely crescent-shaped with brushed finishes throughout. Sizing this case is a little tricky with the “wings” that sit at 2:30 and 4:30 but Codek puts it at 38mm, and my calipers give me somewhere between 38 and 40mm depending on where I measure. Numbers aside it wears and feels like a small watch, but not diminutive. I think it fits well within a “dress watch” wheelhouse, and with the 3 ATM depth rating, I think that’s what Codek was shooting for. On the flip side, if a dress watch was the aim of this piece, I think that the brushed finishes don’t really match that intention. Additionally, Codek has opted for drilled lug holes, which the tool watch wearer in me loves because it means fast and easy strap changes, but I do think they disrupt the overall design (especially when paired with OEM springbars that protrude slightly). One element that stands out to me is that the caseback is smaller than the bezel, so the case itself is beveled upwards giving the watch a sort of “flying saucer” vibe. This also makes it exceptionally comfortable on the wrist. Flipping the watch over you’re treated to a nice sapphire display back. Around the crystal you’ll see some minimal text that includes the serial number of the piece itself (the Spirals are in an edition of 300). The perimeter of the caseback is polished and sits roughly 1.5mm off the rest of the case. I didn’t notice this while wearing it, but it is worth pointing out.

One of the things that I find interesting about this particular independent brand is their transparency with their supply lines. Codek’s website clearly states that they use Cattin in Switzerland to make their cases, their movements are assembled by ETA, and their OEM straps come from Hadley Roma. I can’t think of too many examples of brands like this that allow you to peek behind the curtain, but it’s something I can appreciate. The face of the Spiral further cements their influence from traditional French watchmaking. Codek states that waves on the dial are meant to represent the motion of the escapement (amplitude) and the arcing hour indices are meant to represent the beating of the hairspring – as stated earlier, I’m not sure if this narrative is needed because I do believe that this watch could stand on its own design merits. The watch is dramatically asymmetrical with two offset crescents making up the majority of the middle of the dial. The indices ascend (or descend depending on how you look at it) as you move around the face of the watch. Last thing worth noting is that the dial is entirely non-luminous. The hands are black and skeletonized with a red tip on the thin black second hand. Legibility wise, the watch performed fine. The hands and indices are in contrasting colors to the dial (this is true with both dial colors) and that helps a lot when you glance at the watch. While not having lume on this piece is okay, I think they missed a great opportunity to play with some lume application designs – lots could have been done here. The design and layout themselves are going to be polarizing. To me, I find the design itself to be creative and interesting but others (I imagine) will have trouble with its lack of balance – the term “marmite” comes to mind. As I stated earlier one of the cool things that Codek does is provide some real transparency on their manufacturing process. It’s stated on their website that their ETA 2824s are assembled by ETA in Switzerland, then regulated by a “certified watchmaker,” in 3 positions. They go on to say that on a full wind, -3/+6 seconds a day should be expected. The reliability of the ETA 2824 is a known factor, and the claims of regulation are impressive. I can say that in my time with the watch it’s kept excellent time based on my observation. In terms of value, it’s cool to see a smaller brand using the 2824 at a $600 price tag (especially when you factor in the easily found $50 promo code). Most of the time I automatically write-off smaller brand’s OEM leather straps. They’re often too thick, stiff, or poorly made. This strap from Hadley Roma is made of a nice and supple brown calf leather and has been notched to accept quick release spring bars. The strap’s buckle has been etched or laser engraved with Codek. I’ve found them to be comfortable to wear and they are constructed nicely. This is likely a strap that I would keep on the watch after I received it. I think I’ve already been pretty clear on my overall thoughts of the Codek Spiral. The design is very interesting and will appeal to a certain segment of the watch collecting community. It’s a design that won’t be for everyone, but if it appeals to you, I think it’s a good value overall. However, I think that there are some minor aspects of the watch that I find peculiar, mostly in the finishes that were chosen for the case and the (fixable) implementation of springbars that protrude from the case (maybe this is just a personal pet peeve of mine.) The Codek Spiral is available for $600 in a limited edition of 300 pieces. For more information visit codekwatches.com

Necessary Data
>Brand: Codek
>Model: Spiral
>Price: $600
>Size: 38mm
>Would reviewer personally wear it: I might, it’s not really “in my wheelhouse,” but it’d be a fun piece to have around.
>Friend we’d recommend it to first: Someone that would describe themselves as “funky.”
>Best characteristic of watch: Uniqueness of its design.
>Worst characteristic of watch: I think this could be the same as the above, in my opinion, you’re either going to love or hate this watch.