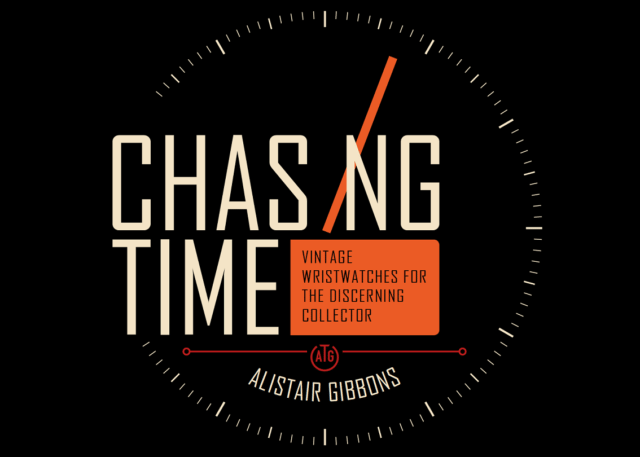 Chasing Time: Vintage Wristwatches for the Discerning Collector is an interesting new book by colleague and watch enthusiast Mr. Alistair Gibbons. To discuss his new book on choosing and appreciating vintage sport watches, I asked Alistair a few questions about choosing the particular historic timepieces he selected for inclusion in his book and his take on vintage watch collecting today. Buying and appreciating vintage watches is an art as much as it is a skill – with not all old sport watches automatically garnering “classic” status. Let’s see what we can learn from the author of Chasing Time.

1. The vintage watch world has been commercially hot for a while, especially among collectors. To what do you credit this contemporary popularity?

“I started collecting these watches in the early ’90s when flying about and editing commercials but without focus. So when the internet came along, specifically eBay and the forums, I entered this interesting world of like-minded collectors from all different backgrounds as the watches were not famous yet and were not too expensive. At the same time, the famous marque’s new watches were just not very good. Probably resting on their laurels while vintage availability offered more interesting choices. The last 20 years have seen a big leap in, shall I call it, domestic tech. I worked in a very high tech world in video post production and for me I admired the mechanical aspects of watches and engineering in general. That I think has spread. Your mobile will tell accurate time but it just isn’t very interesting whereas a mechanical watch has a heartbeat and a vintage watch has a history. Working into the late 1960s mechanical watches were at their production zenith hundreds of years in the making – reliable, and because it was such a competitive market, increasingly interesting. Your standard Rolex Submariner is a good watch but there are millions of them but a vintage 5513 or a 5513 with an Explorer dial with great patina is something much more special. The other thing is that social media apps were largely created from studying forum behavior, car forums, fashion forums, and watch forums. If you want to get more people onto your app, then identifying things that have become popular and pushing them becomes a driver. As an example you can sell watches on Instagram without any background or history in watches. And let’s face it, pictures of cool watches do something to the mind if you like vintage anything.” 2. Would you recommend vintage watches instead of contemporary timepieces? Or rather should collecting watches in your opinion be a mixture of seeking out both new and old items?

“I think both really… it depends what your budget is. If you’re wealthy, then it really doesn’t matter but time moves forward and we can’t keep looking back for what has been created. The advantage is that we have the knowledge and combine it now with new technology to make modern timepieces as good as the vintage ones used to be. Balance is about appreciating what has been learned in the past and translating it into the continued learning of here and now. I wrote an article for International Watch Magazine in 2007 via the Heuer resource On the Dash about choosing 5-4-8. The premise was to choose the best 5 vintage watches for $8k, which I enjoyed putting together but it really needed an extra modern watch. When you have restored a cool vintage watch or had your watchmaker do it, you know what goes into the effort so whacking it when doing odd jobs around the house always worried me. I’ve always had a couple of modern watches. There are lots of brands to choose from that don’t cost a packet… Sinn, IWC, etc… I wear one of 4 Bremont chronographs I own most of the time.” 3. Looking through the many timepieces in the Chasing Time book one notices that most if not all of the watches are what we would call sport or military watches. What is it about these types of products which have allowed them to endure for so long whereas many other watches from bygone eras (despite quality) are considered less interesting for collectors?

“Well I think it comes down to quality, the improvements in technology in the late 20th Century, and the complication. That term refers to something added to a standard movement to improve its usefulness. So a Grand Complication would be Perpetual Calendar with Moonphase. It tells the time, the date, day, month, and even adjusts for a leap year when also displaying the phases of the moon. I specialized in chronographs, so a watch with a stop watch laid on top controlled by two pusher buttons on the side of the case, and a start/stop reset. A chronograph records time in various ways depending on how the dial is printed or the movement is laid out. So pilots used chronographs which had tachymeters on the dial or the case so they could calculate speed over distance for cross country navigation.

Doctors wore chronographs with ‘Pulsometer’ dials to time someone’s pulse. With sport diving being adopted in the ’60s by the public, diver chronographs were created that had dive table scales engraved on their bezels (the ring around the top of a watch case) so a diver could calculate decompression. The military adopted many of these types of watches. In fact a lot of them were originally specified by the military. As for movements, well, manual wind chronographs were at their zenith by the end of the ’60s.” 4. What makes a vintage watch collectible today in your opinion? What qualities, functionality, design cues, or history help make a historic product compelling for today’s collectors.

“Well things have moved on quite a bit. The market is a little muddied as after the financial crisis I think a lot of money was put into watches not for big returns, but to get back more than a bank would give. The usual suspects – Rolex, Breitling, Heuer, etc. – have become very expensive even though they are not that complicated. One should always look at the quality of the movement. Most say the dial is the key and yes it is for re-sale, but if you really want something cool that will last, go with the movements. Everyone is obsessed with stainless vintage watches but there are plenty of very good gold plated watches around that are reasonable. I am wearing one right now with a Valjoux 23 movement used by Rolex and all the big hitters back in the day, as the youth say.” 5. Auction houses would like people to believe that timepieces make good investments. Except that they were tremendously late to the ‘online’ party and are now often listing items with dubious origins.

“Here is a story. I bought an old Rolex years ago that had a military number on the back. Not an issue number but an in-service number – a Royal Navy diver. I sent the watch to the unnamed auction house, as it was listed incorrectly making out that it was a “James Bond watch,” but the whole market by then knew the model number was a different version. They also made no mention of it having a military number on the back. I literally watched it being destroyed on collector forums as click bait. It never sold and was ruined by that auction. Although in saying that, Watches of Knightsbridge in London are very good from personal experience, as they are very knowledgeable specialists.

Seasoned experts like us typically disagree because we know that a lot of value is emotional and it also changes from specific product to product. People are very emotionally attached to their watches. What is their track record like, how long have they been selling, and what is their reputation? There is a fashion at the moment for vintage dive style watches. There really aren’t that many vintage diver models worth buying. The top level you are looking at includes Rolex, Omega, Blancpain, and IWC. The 2nd tier includes Aquadive, Certina, Eterna, Doxa, Tudor, Seiko, Aquastar, and Benrus. Anything else will have cheap auto movements and will be cheaper brands copying the top and 2nd Tier to fill that lower end gap years ago. They are just not very good and one should not pay more than $150 because the movements will be worn out because they were cheap to begin with. If you want to just wear something that looks old and is impractical as a timepiece, then knock yourself out, but I wouldn’t.

Here is a real example. When my two boys were little I would wear a 1967 Rolex Submariner 5513. It was quite accurate but although the dial and hands looked very cool, there was no glow as the tritium material had faded. However, it was still waterproof after a service. I also sometimes would throw the watch to another part of the pool for them to dive down for if I forgot those tube weighted things that they have now for kids. The watch worked perfectly. Now, that is why the Submariner is held in such high regard. It was never super accurate but it was immensely practical.” 6. Where does some new-to-vintage wristwatch collecting begin when it comes to acquiring watches? What are the safest and perhaps least safe places you recommend for people to discover and purchase old watches of the likes you are interested in?

“Well I started selling online via my website ATG Vintage Watches. I started a company and had all my details online. I was reviewed and had lots of feedback so I built a reputation. Collectors have always sold amongst themselves and although sometimes there are problems, they are largely an honest bunch. But I have noticed some issues over the last few years with the explosion of unregistered blogs attached to things like Instagram accounts. Here are a few pointers for buying real world or online. Buy the seller, search them online, and get their real name. All this “vintage guy” or “watcheroo lover” stuff just isn’t the truth. Also try and conduct an online deal over the phone. Is the watch serviced and if so, what guarantee should I expect? This is an important one. I have restored hundreds of watches, but not me… my watchmaker. I could not tell if a watch had been serviced unless I could see debris in the movement. If the watch has been serviced, the guy’s watchmaker will extend him a guarantee which he can pass to you. If the seller has serviced it himself, then he should extend a guarantee.

Also speak to a known dealer, even pay him or her for advice. It saves you money in the long run. Even with a shop ask when the watch was made, put together, or struck. A watch may have been sitting in a storage safe for 2 years before it is sold. That means you are technically eating into its movement warranty because leaving a watch unused is a bit like leaving a car parked on a street for years before driving it. Lastly, do not try to drive too hard of a bargain with a dealer of any kind. There really aren’t that many bargains. New watch sellers can have demo watches that may have gone on a hundred wrists. If you drive too hard a bargain, then that is the one you will get and some manufacturers do not honor warranties if the original purchase price is too far below RRP. A dealer may have two watches that are exactly the same but one may be a little nicer. The more you haggle the more he can’t make his margin. Then, I am afraid you will get the 2nd best one with the worn movement. So try and be nice.”