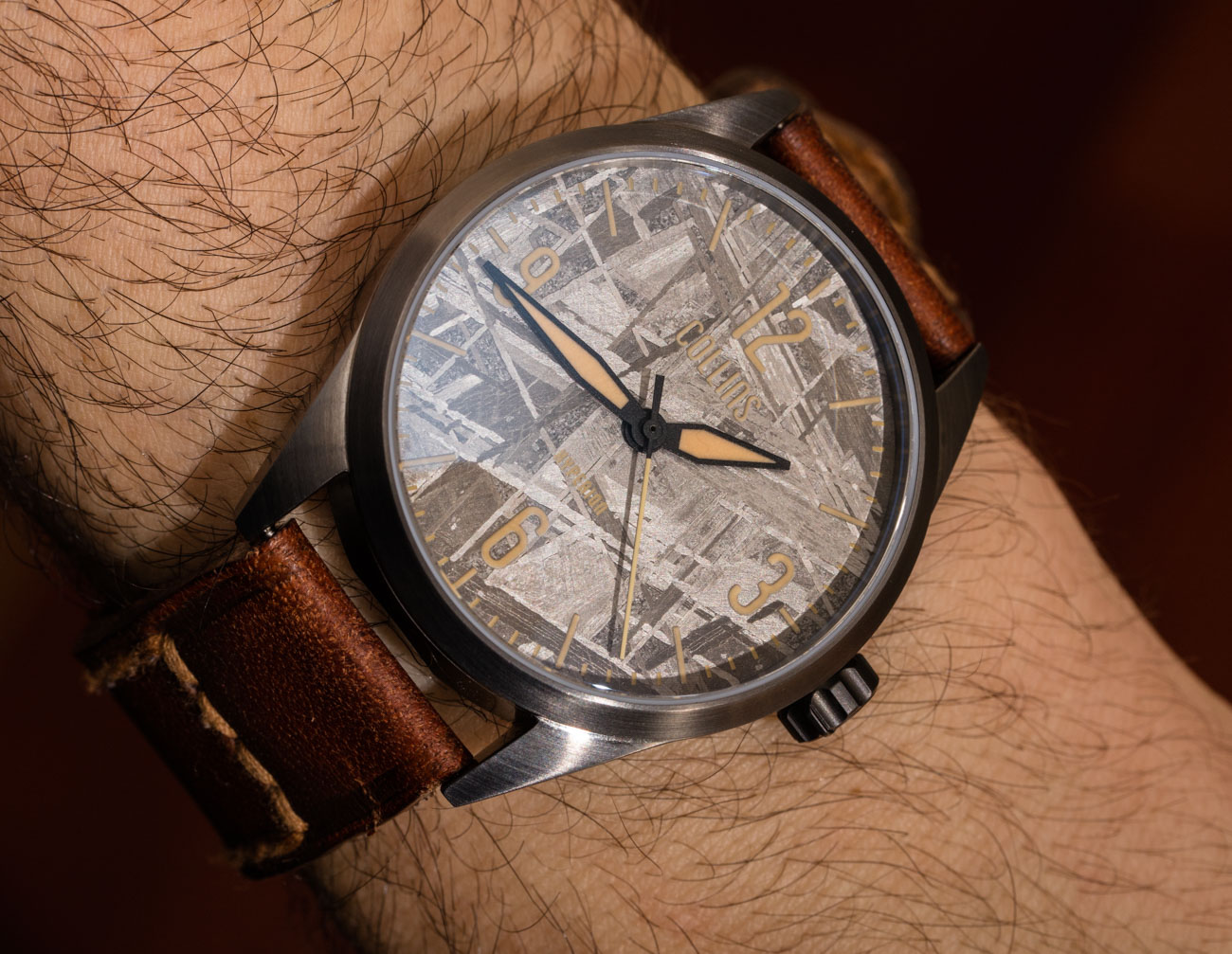 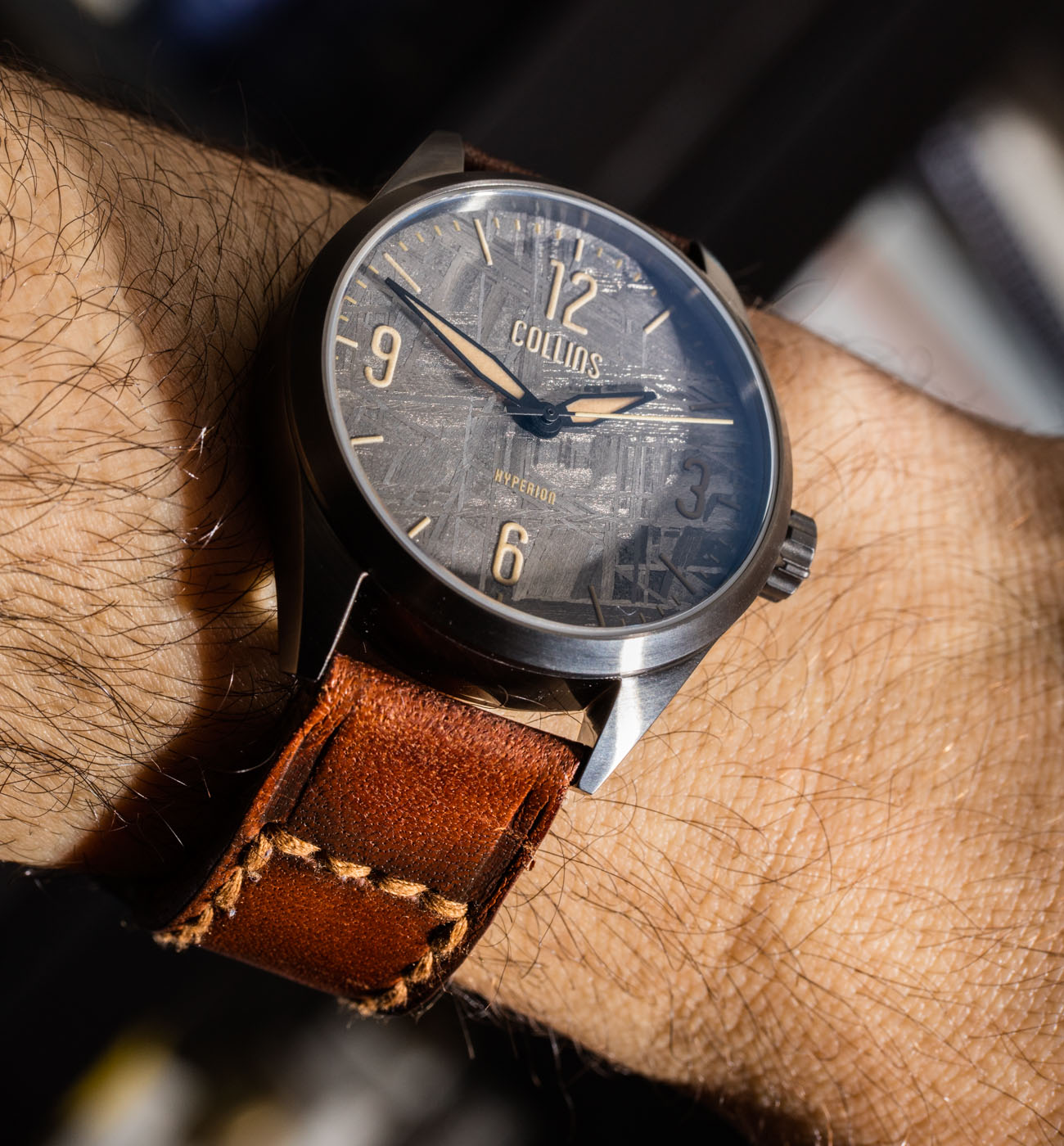 Collins Watch Company is part of a modern breed of “small-batch” American watch companies started by timepiece-enthusiast entrepreneurs — this time based out of my native Los Angeles. Collins Watch founder Jimmy Collins has a day job in the music recording industry and has tried to pull some inspiration from recording equipment, something I believe he wishes to do more in subsequent watches. For his debut timepiece collection — the Hyperion — we see a crown designed to look like a volume-level knob. The Hyperion comes in a few flavors, with this article focusing on a version I particularly like, known as the Hyperion Meteorite.

As the name implies, the Hyperion Meteorite has an attractive natural meteorite dial for the otherwise pilot-watch style design of the Hyperion. Collins even goes so far as to have its Hyperion watches assembled and tested here in the United States (in Ohio), which I think is an important part of the value proposition. What the Collins Watch Hyperion might lack in sheer design originality, it does make up for in good value and handsome appeal. The story to share if wearing a timepiece such as this is, “A watch-lover in Los Angeles made a small brand, and the watches are assembled in the U.S. with a Swiss movement.” For the demographic Jimmy Collin’s is trying to reach, that is enough. Looking ahead, my recommended goal for brands like Collins is to increasingly apply their own design DNA to their products so that someone seeing their watch on someone’s wrist across the room can say, “Hey, isn’t that a Collins watch?” 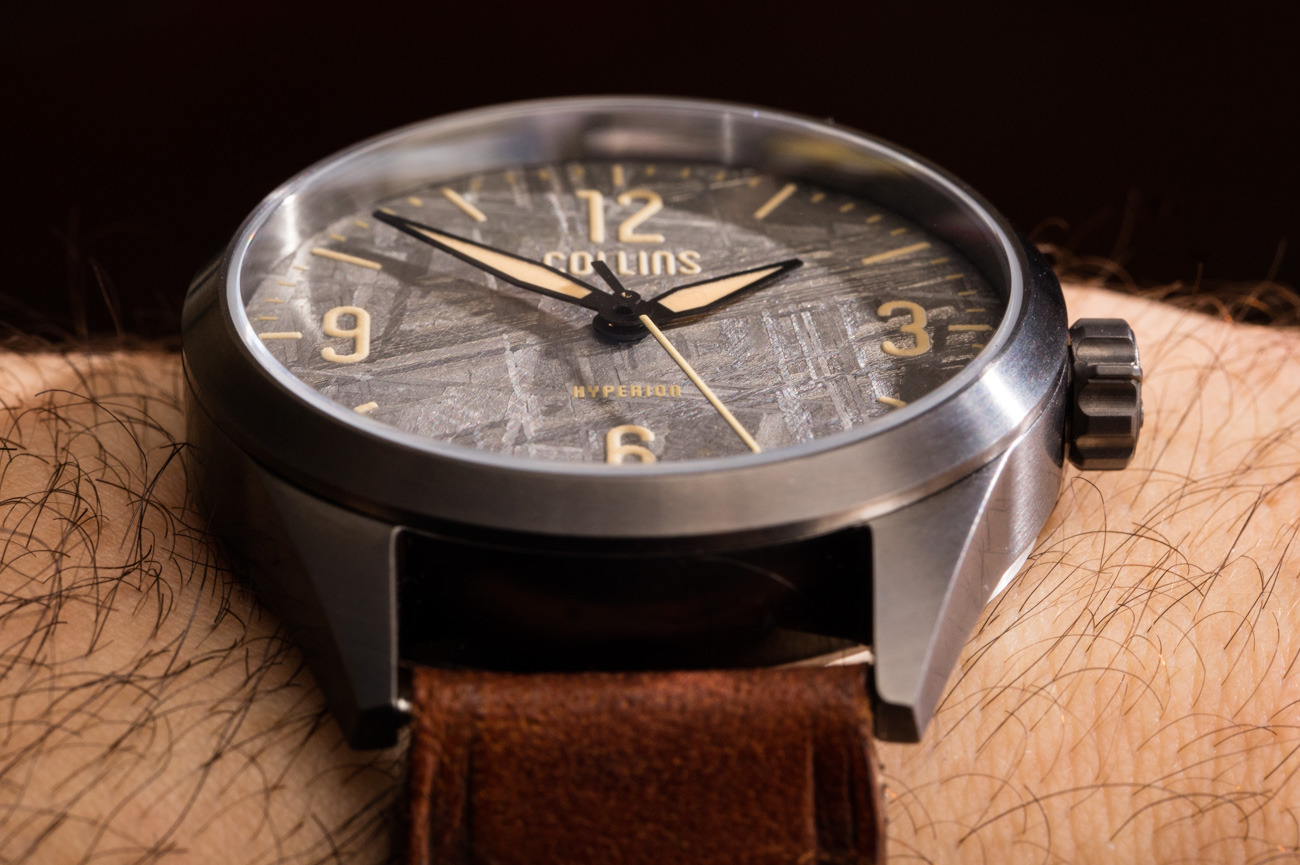 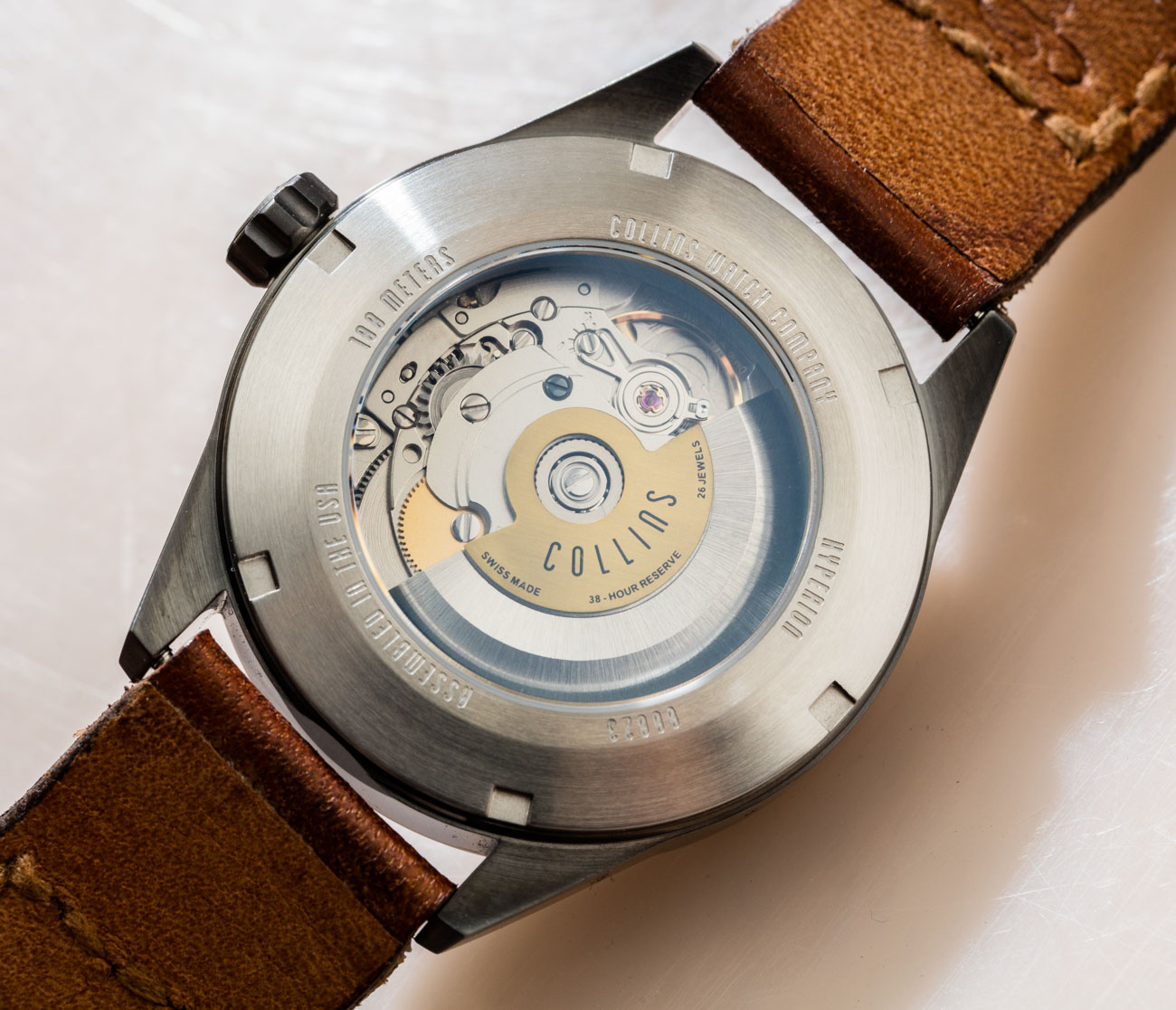 The Hyperion Meteorite is the same as the normal Hyperion watch collection, save for the case finishing and the natural meteorite dial. The case finishing here is a “gunmetal gray” PVD coating, and the steel case itself is 40mm-wide, 13mm-thick, and has a 48mm lug-to-lug distance. That makes for a very wearable “everyday size” that I think will look good on more wrists than not. The case is topped with a double-domed sapphire crystal and has 100 meters of water resistance. The caseback also has a sapphire crystal window for viewing the automatic movement inside.

For the movement, Collins Watch Company has decided to use a reliable Swiss Sellita SW200 automatic. This is more or less the same as the Swiss ETA 2824-2 automatic. It operates at 4Hz with 38 hours of power reserve. The unfinished movement surfaces actually match the brushed finishing of the caseback, so the materials at least match aesthetically, which is nice. On the automatic rotor is a custom Collins plate, which adds a small additional level of distinctiveness to the overall product presentation. 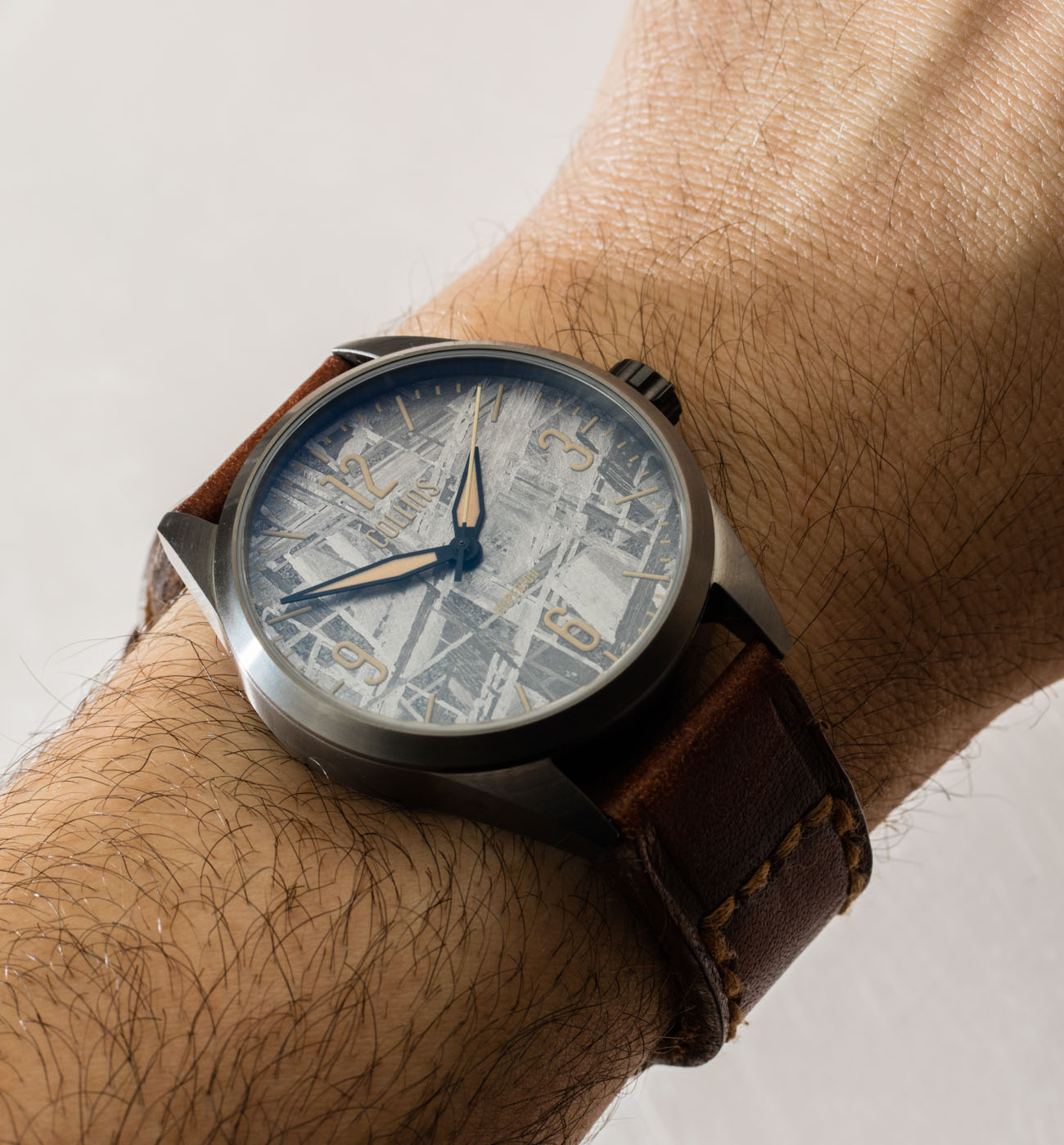 As a seasoned watch collector, what I like about the Collins Hyperion Meteorite is its simple fashionability. The gunmetal gray steel case along with the gray meteorite dial and heavy cream-colored hour markers and lume make for a handsome overall look. The black-lined hands are legible against the dial and offer a nice mixture of familiarity with some added personality. You don’t need to be a watch collector to appreciate the Hyperion Meteorite’s appeal, and as a watch collector, you can appreciate the use of quality parts and the reasonable value proposition of the product.

Attached to the case is a Gunny Caitlin 8 model distressed brown leather strap. It uses a Collin’s signed buckle and has an overall nice, worn-in look. That said, the first thing I would do if I were going to wear this watch on a more regular basis would be to replace the strap. For one thing, I don’t wear much brown so I’d consider a gunmetal or gray-colored strap instead of the brown. More so, the Gunny strap is comfortable, but I’ve never been too much of a fan of straps that look “too handmade.” When it comes to straps, I like everything to be “machine perfect,” and I don’t like the “organic look” as much as some other people do. The strap is 20mm-wide and, if you prefer something else than the stock strap, swapping out the band on the Collins Hyperion Meteorite is a very simple matter, provided you have something to replace it with. 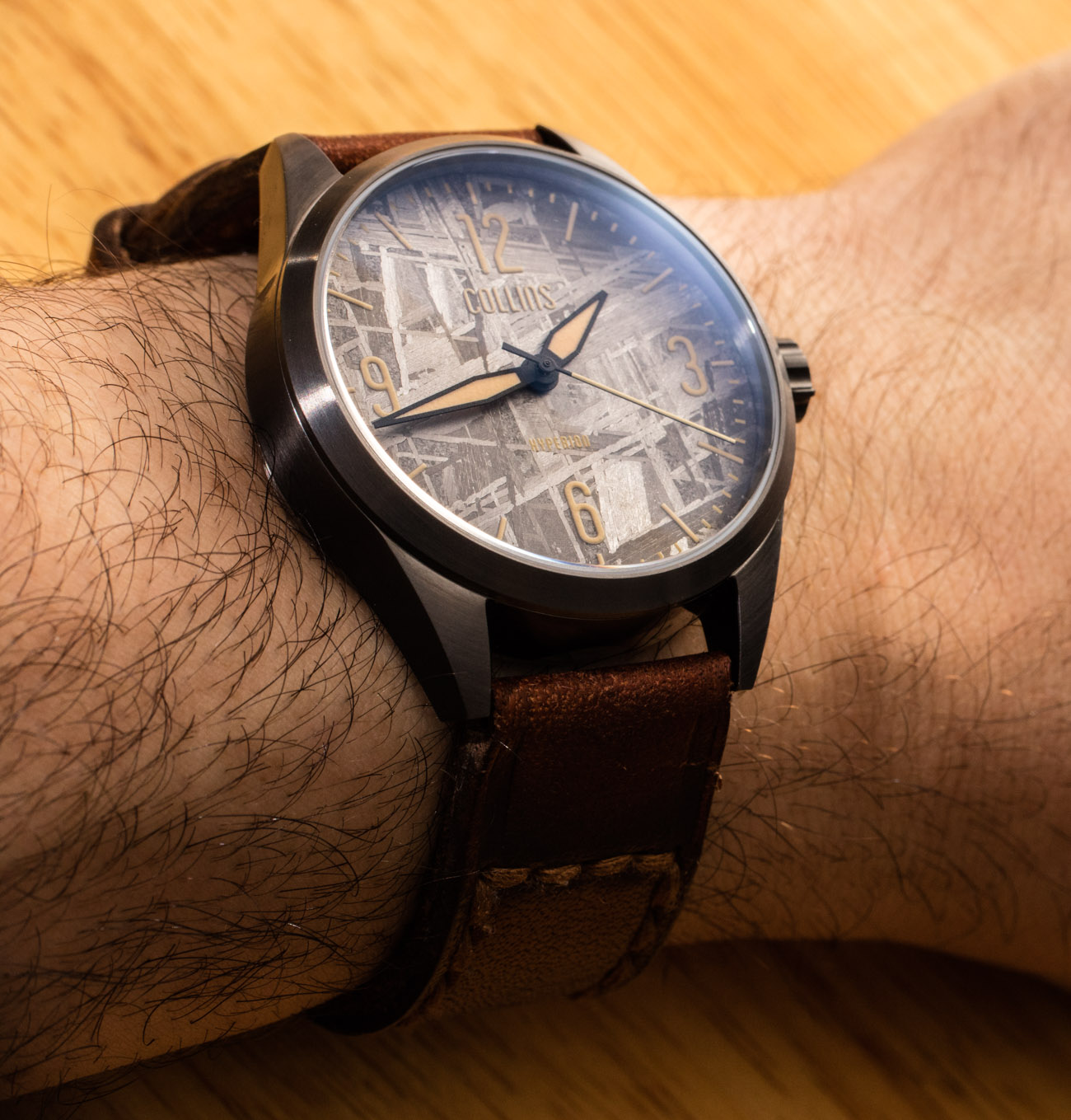 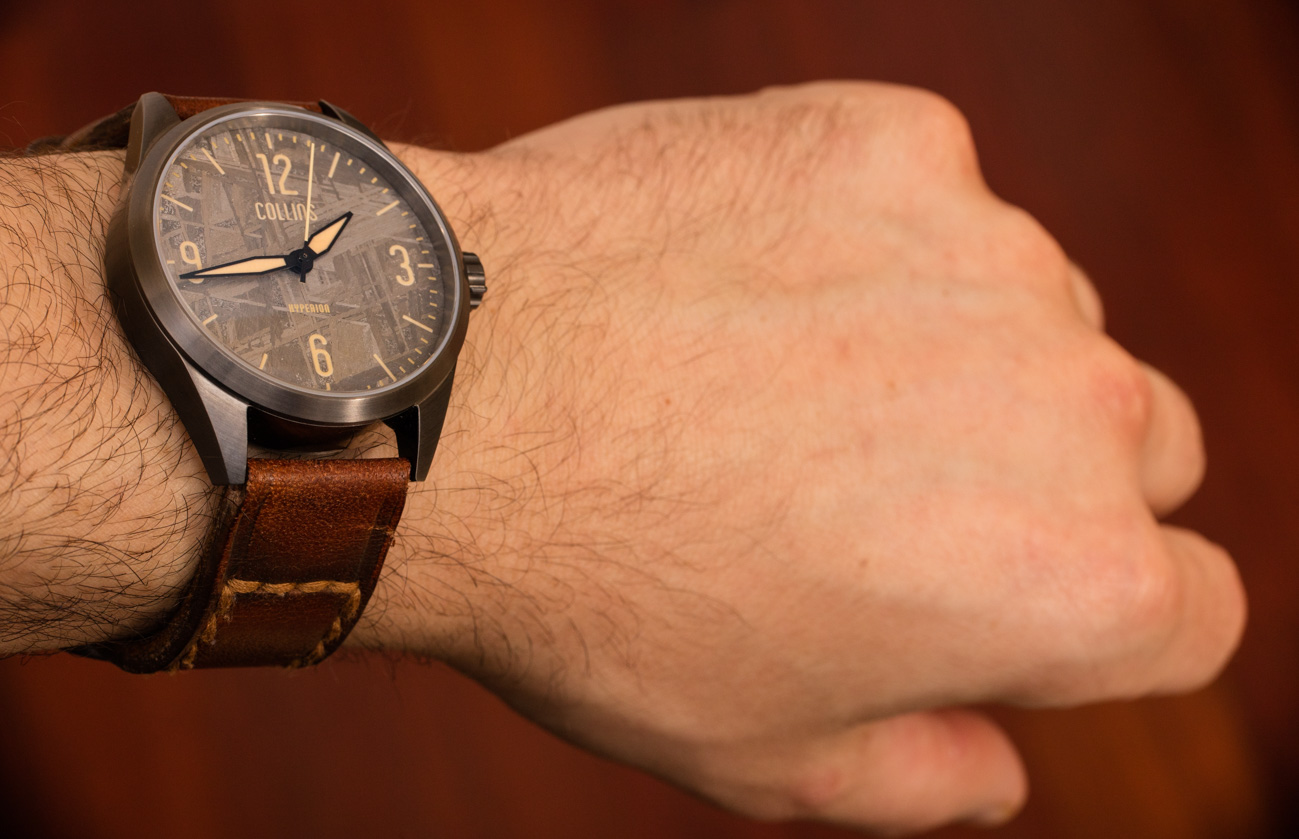 At all times, the hands on the dial are perfectly legible, but depending on the light, the hour markers and other printing on the meteorite dial are not. That isn’t a big deal to me, but those who like to see the hour markers all the time, in all light situations, should consider how the cream-colored lume printing on the dial sometimes simply blends in with the look of the dial. The hour marker design is the same across all the initial Hyperion watches, so for a slightly more traditionally legible dial, you can opt for something else that Collins offers. For me, the Hyperion Meteorite is the most interesting of the debut Collins Watch Company products and blends a familiar look, decorative yet masculine dial, and pleasant emotional connection to my hometown. According to Collins Watch Company, the Hyperion Meteorite will have a debut price of $585 USD with just 20 pieces initially made and then eventually go up to a retail price of $775 USD. Learn more at the Collins Watch Company website here.