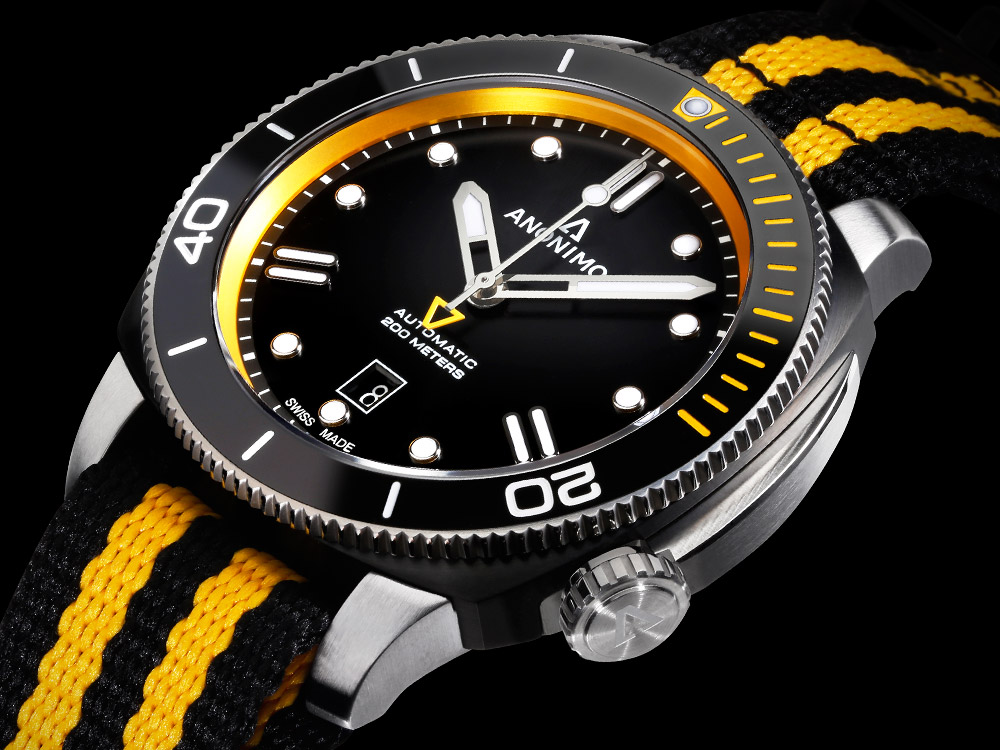 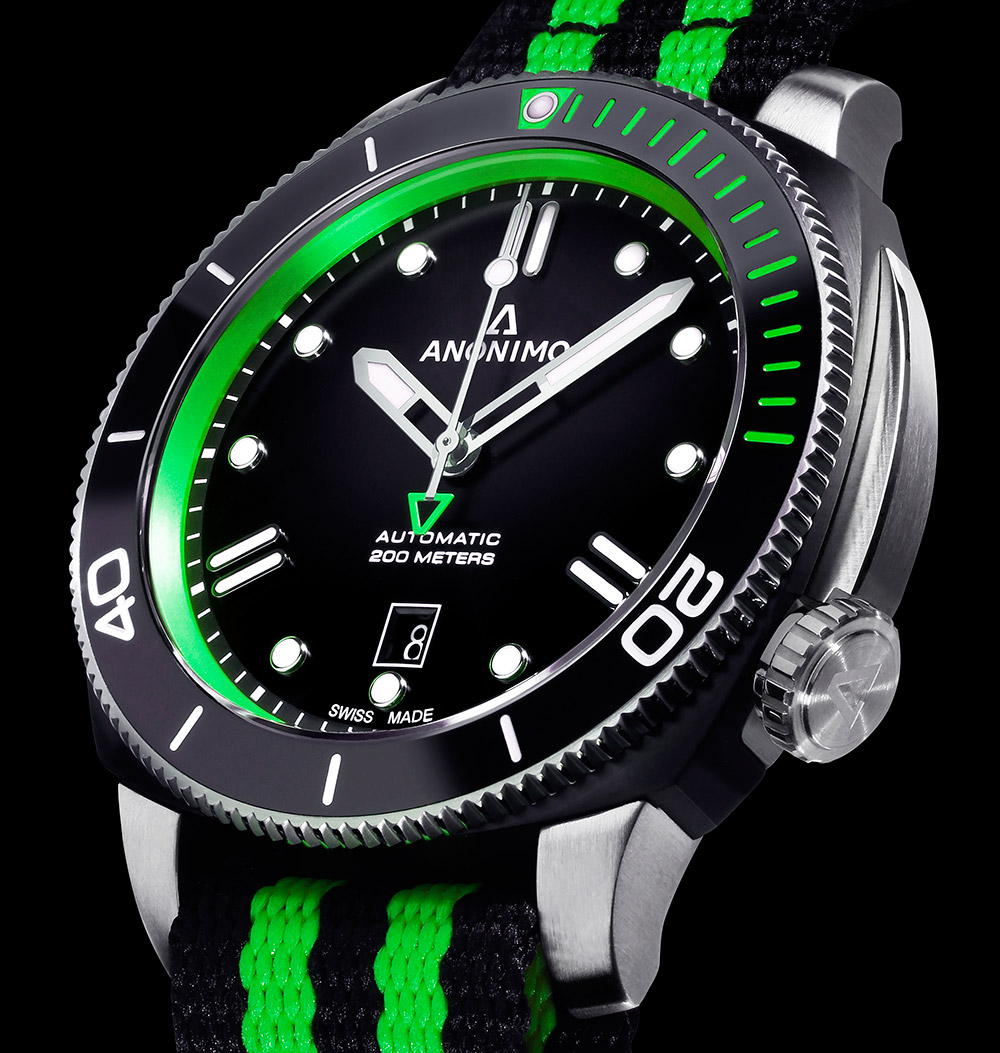 It’s been a hot minute since we last heard from Anonimo, but the young Italian brand has been busy between the last few Baselworld cycles under new management – dramatic changes which have yielded a far more cohesive collection of watches that bode well for the brand’s future, especially given its somewhat tumultuous past. Just in time for summer, Anonimo’s newest sailing watch – the cushion-cased Nautilo, gets a colorful dial remix, complete with a quartet of color-matched NATO strap options that should appeal to proclivities at poolside and seaside alike. Consider it a civilian twist on the Nautilo initially unveiled for Anonimo’s partnership with pro sailing’s Team SFS. 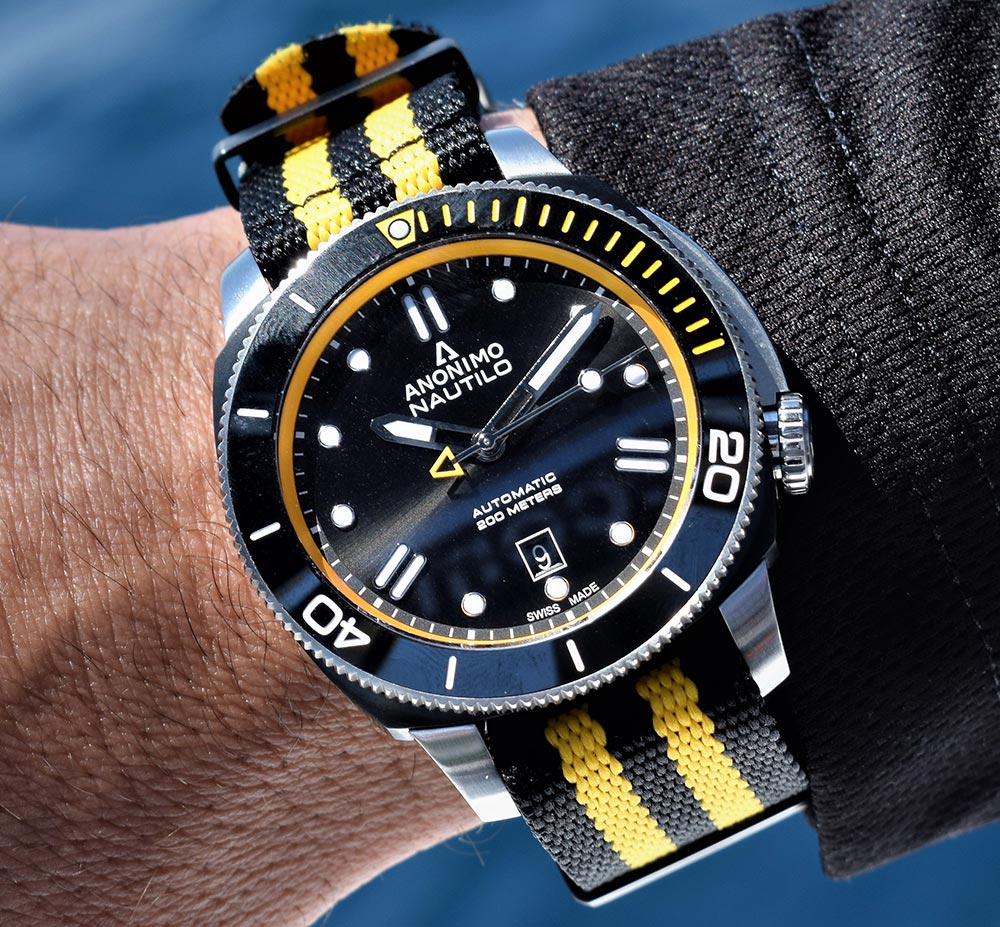 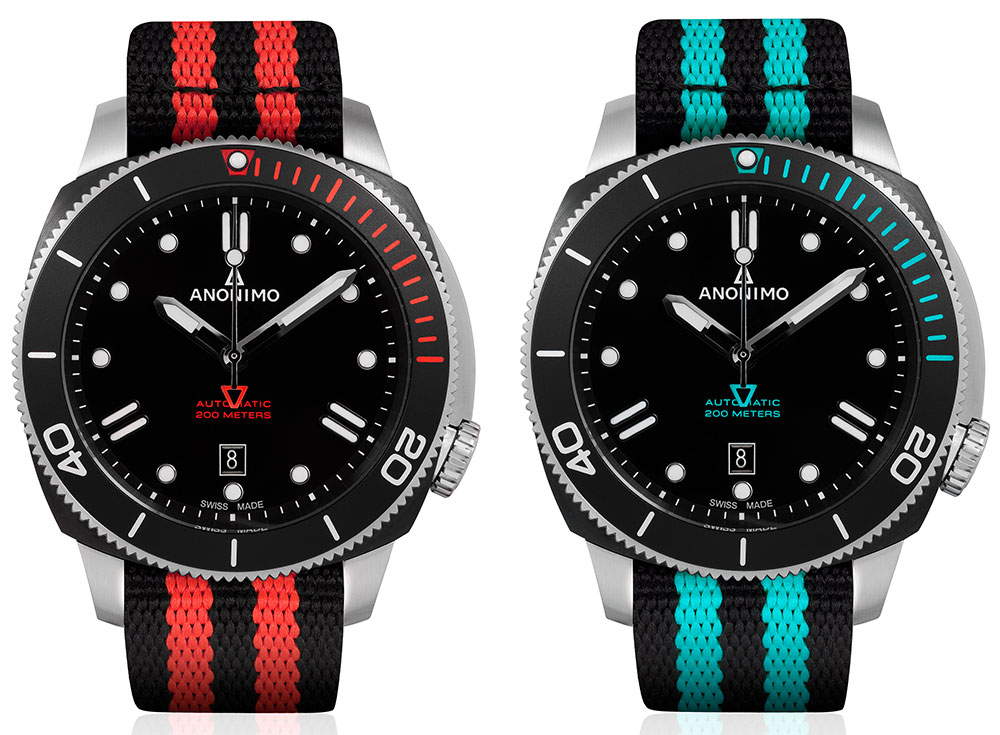 If you’ve been out of the Anonimo loop, we’ll catch you up real quick: the brand was co-founded by then-Panerai CEO Dino Zei and Federico Massacesi in 1997, shortly after Panerai was snapped up by Richemont and moved to Switzerland. Rather than relocate, the two remained in Florence, tapping into Zei’s past connections as a former naval officer to create aesthetically striking watches for various units in the Italian Navy. Those who remember this era of Anonimo are likely to remember the big, bronze cases and over-engineered (read: “Panerai-esque”) protective crown guards – a design language that was as polarizing as it was defining in the brand’s earliest days. See our visit to the Anonimo manufacture in Florence and more about their background here. 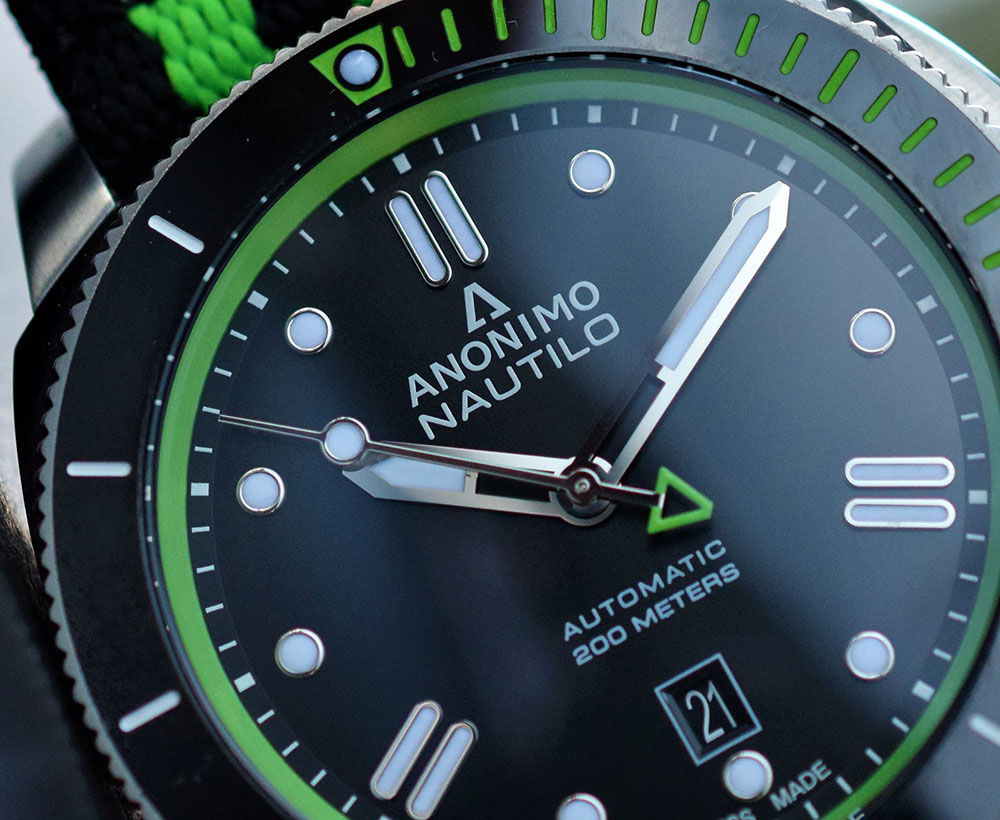 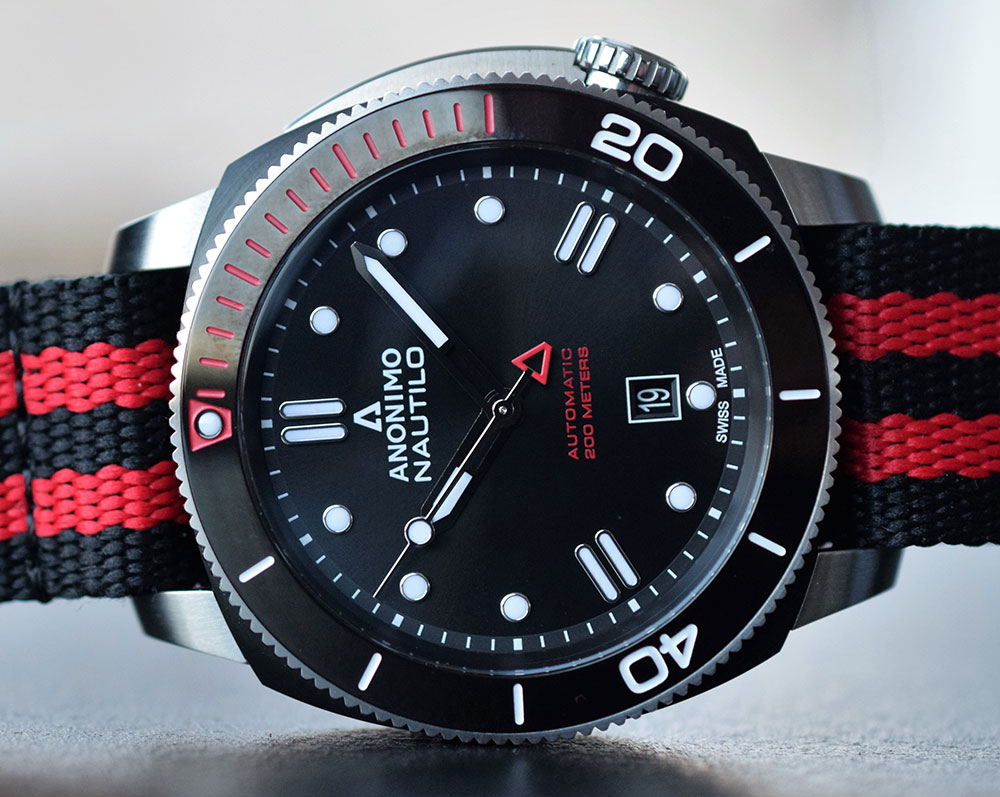 Now in its 20th year and under a new watchful Swiss ownership, things have settled down a bit, enabling the most current version of Anonimo to still pay homage to its earliest days in the interesting Militare collection, while retaining its maritime roots through the new Nautilo collection. While both collections usher in more cohesion than ever before, it’s the latter whose more classic aesthetic should appeal to both traditional dive and sport watch fans alike – especially as this particular series of Nautilo watches were designed with sailing in mind. 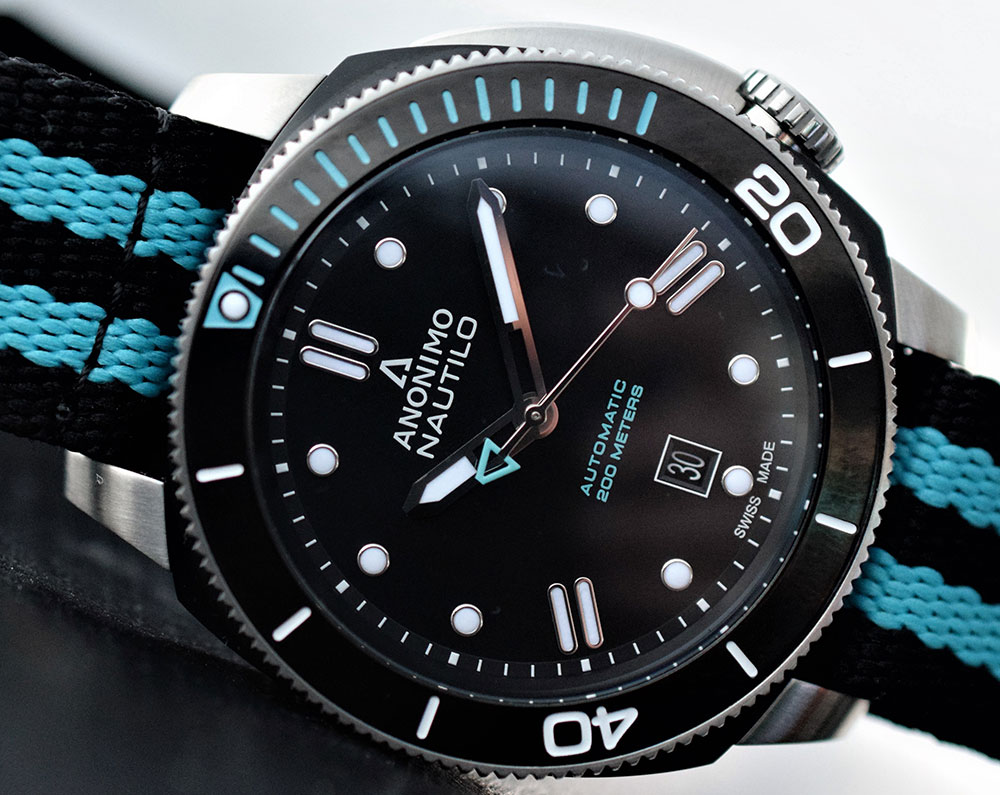 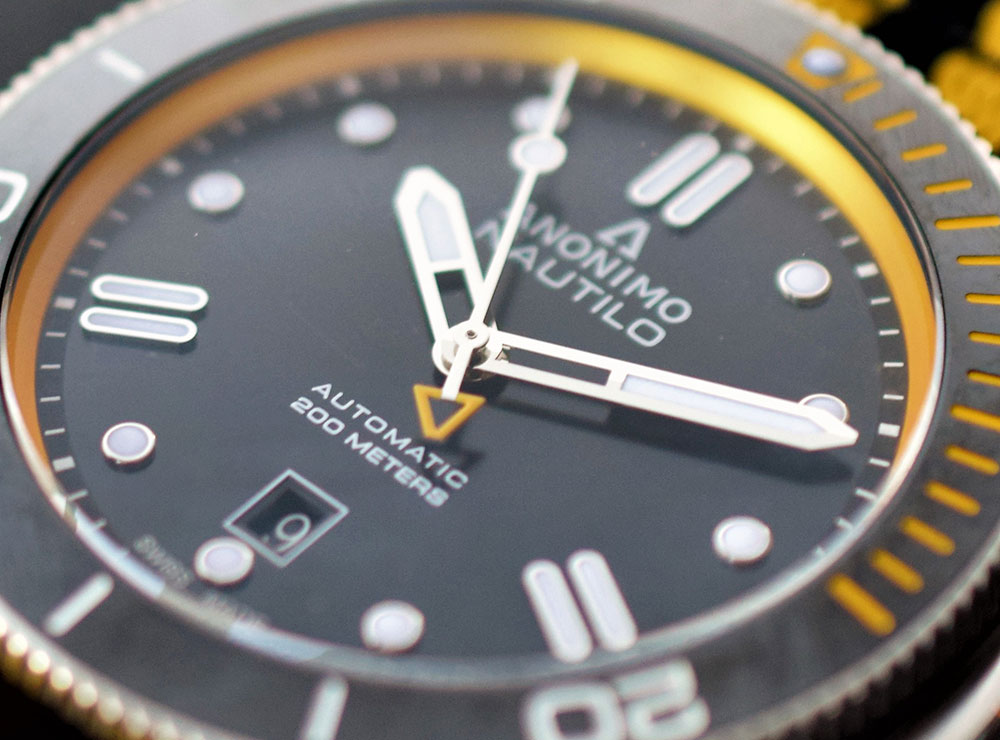 History aside, there’s a lot to like about the Nautilo watches – even if they’re a little safe by Anonimo’s standards, they’re still plenty distinctive, starting with the 12-4-8 applied bar indices, which are designed to yield a triangular, “A” shape inspired by the Matterhorn. Of course, this is the famous peak which straddles the border between Switzerland and Italy – the two countries who both share a vested interest in this brand’s evolution. There are other nods to this triangle – in the counterweight on the seconds hand (color-matched to the dial’s chapter ring, the first 15 minutes on the ceramic bezel, and the NATO strap on each Nautilo watch), and in the brand’s logo as well. 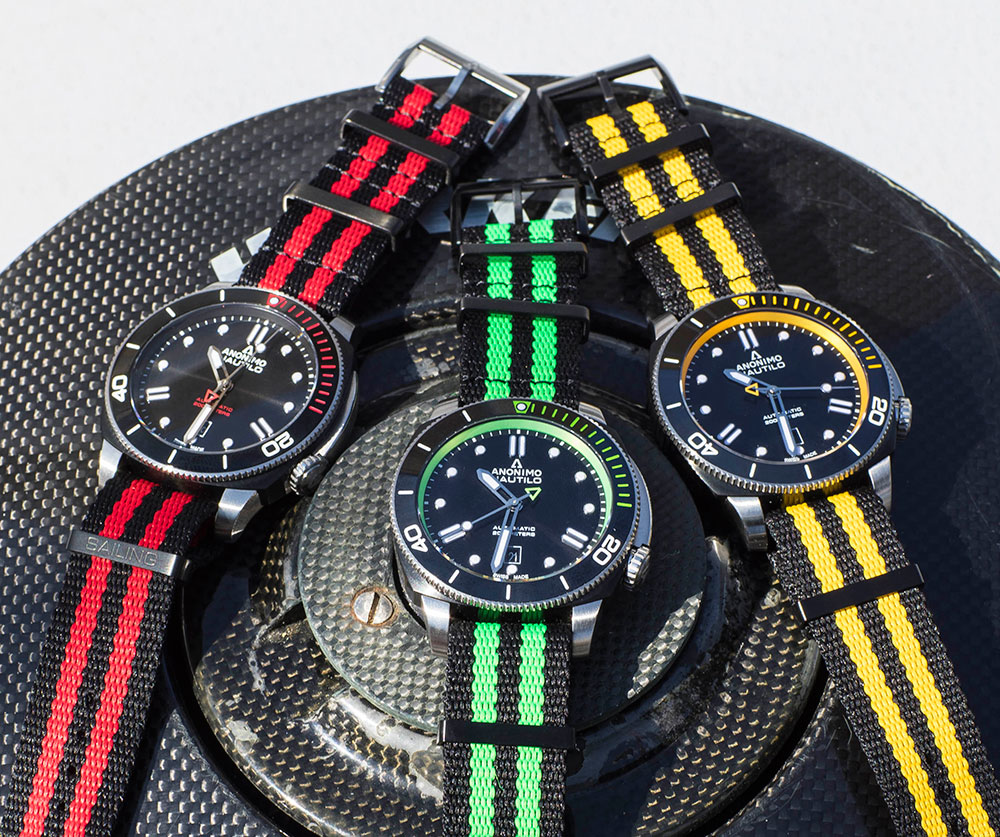 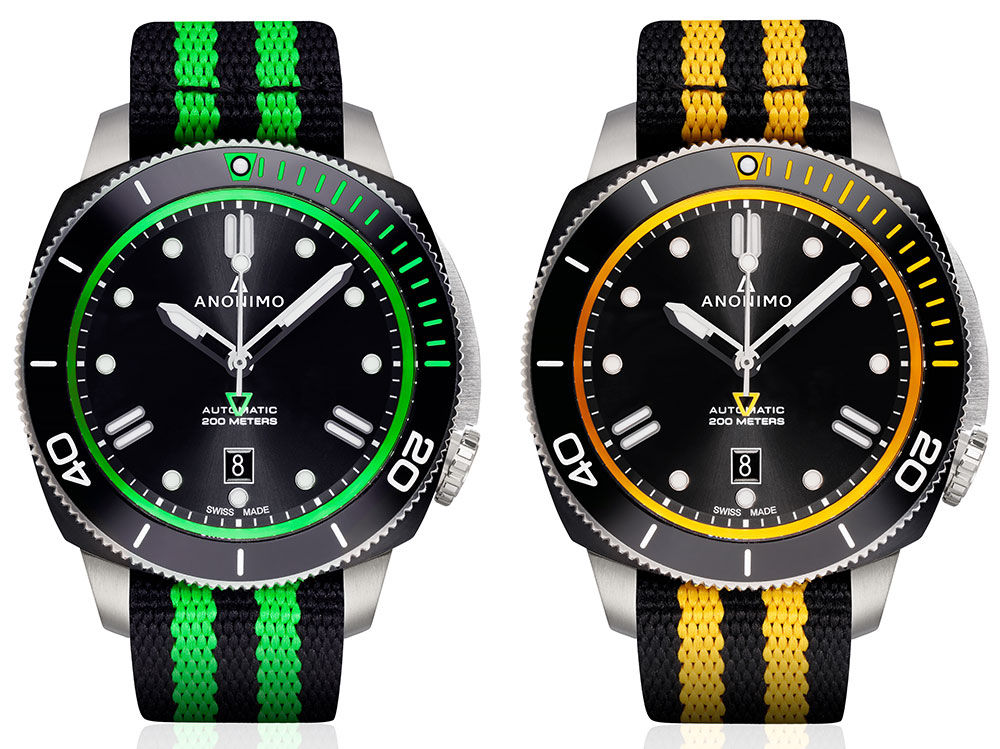 And while there’s nary a whiff of bronze in the latest Anonimo Nautilo NATO collection, those chasing Anonimo’s classic patina look will find reassurance that there are other options within both the Nautilo and the Militare to choose from. However, stainless steel seems to suit these four colors nicely, yielding a warmer, more cheerful, poolside demeanor rather than the somber, maritime aesthetic you ultimately get from a well-worn bronze watch. 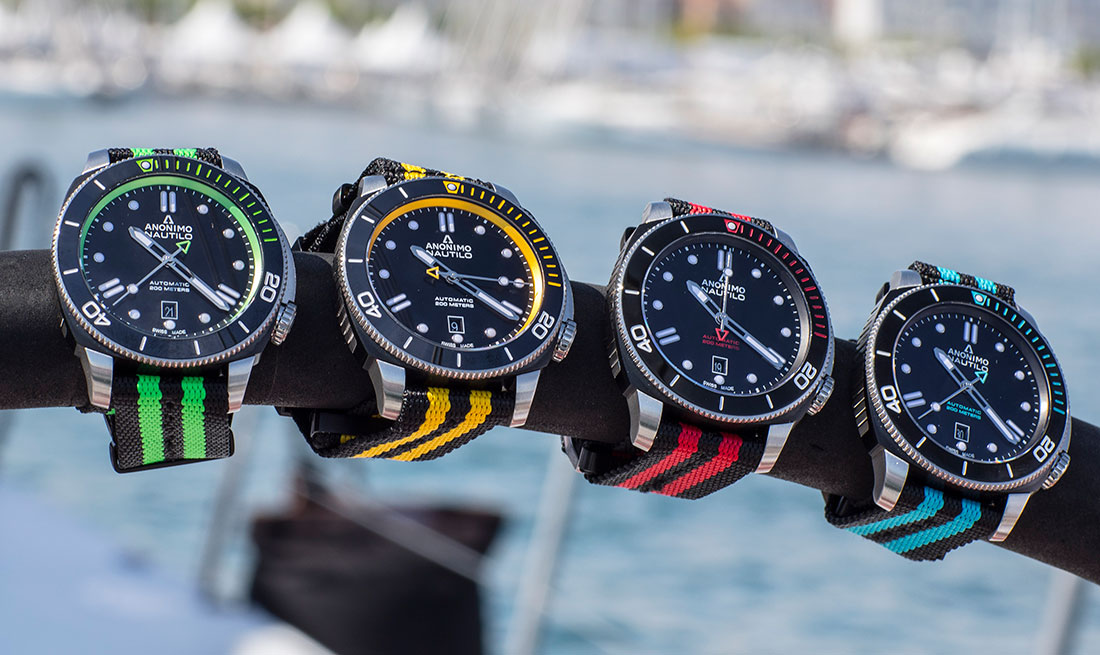 Inside the 44mm brushed stainless steel and DLC-finished case (200m water-resistant) hums a Sellita SW200-1 automatic movement, characterized by a date aperture at 6:00, and a protected screw-down crown at 4:00. This ETA 2824 clone is widely distributed in watches at this price point and should yield reliable, albeit familiar timekeeping qualities throughout its 38-hour power reserve. The Anonimo Nautilo collection watches will each be available on either a fitted black rubber strap (the option of choice for Team SFS), or the colorful NATO straps shown here – each with a price of €2,190. anonimo.com