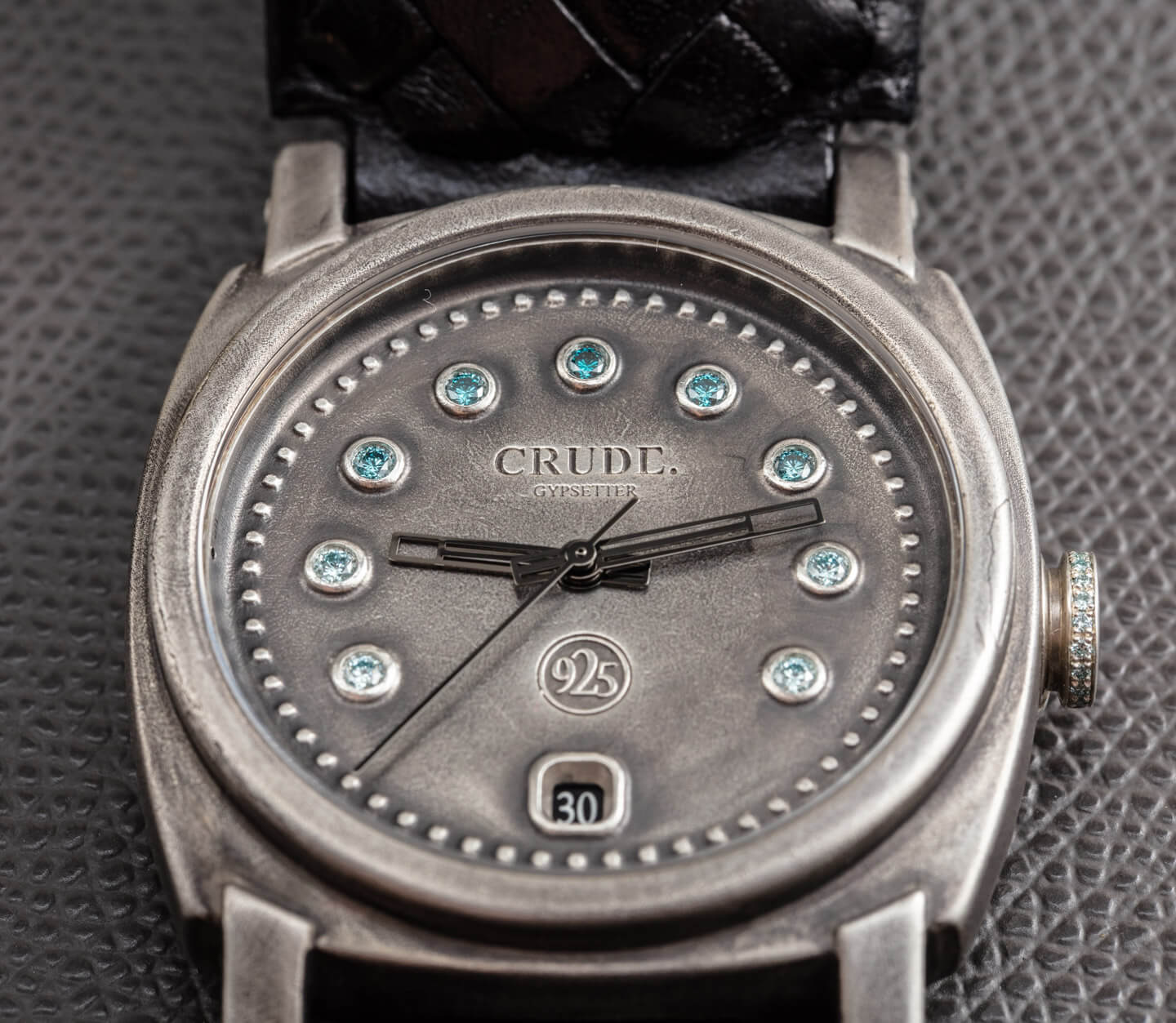 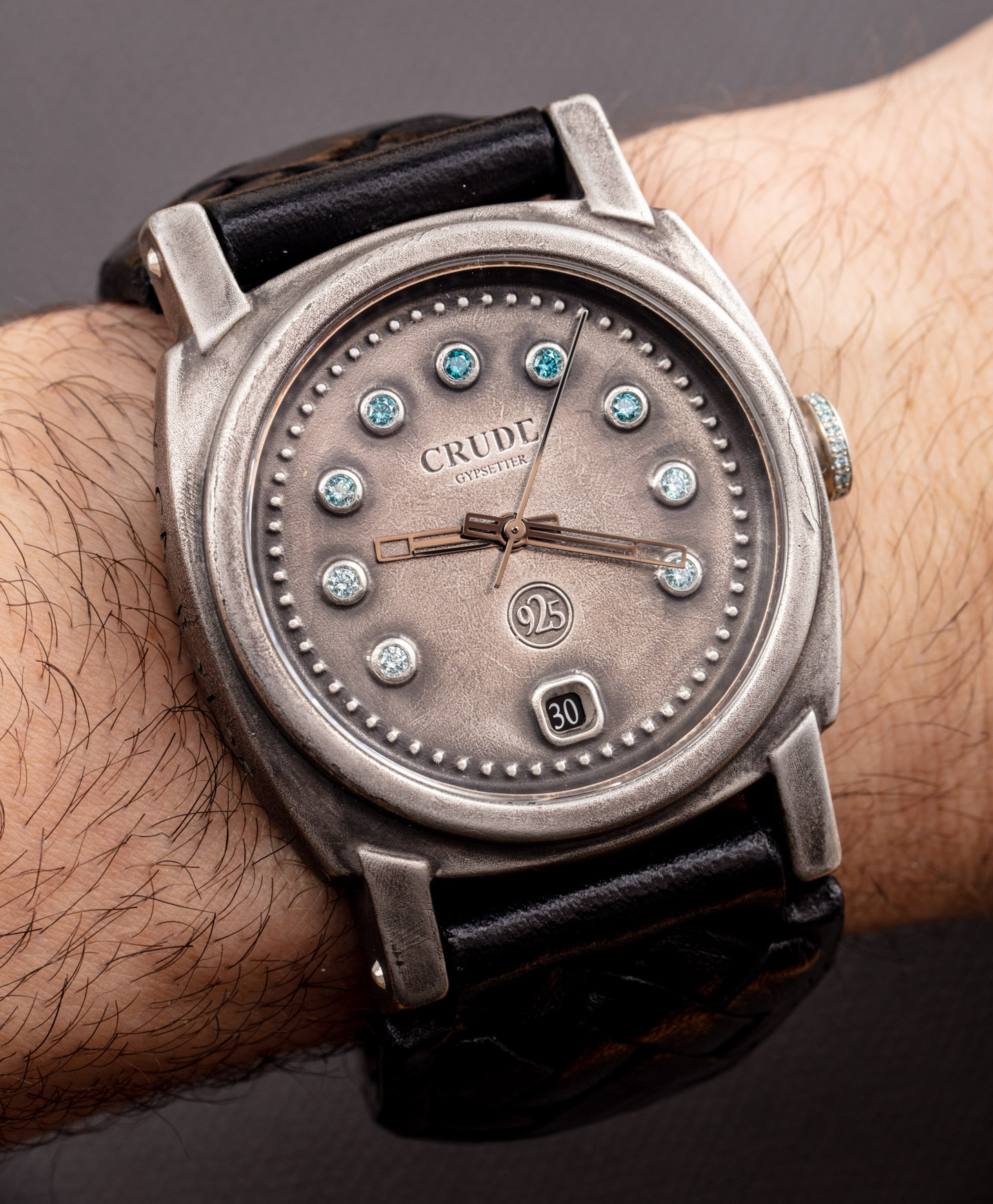 Crude Studio is a relatively new watch company whose atelier is based in Germany near the jewelry/watchmaking town of Pforzheim and whose founder lives on the Spanish resort island of Ibiza. Already that sounds like a pretty interesting recipe for a watch brand. The company’s debut product is the Gypsetter — a name that combines “gypsy” and “jet-setter” — commenting on the type of free-spirited, nomadic souls that are the brand’s target consumers. The Crude Gypsetter watch is truly innovative and well-done, although by design, it isn’t for everyone. I’m not even sure I have what it takes to be part of the Gypsetter club these days, thanks to pandemic-grounding, but I am deeply familiar with the mentality the brand’s founder applied when creating this pretty cool timepiece.

My journey with Crude started at a French pastry shop in the trendy Melrose district of Los Angeles, where I first met Greg, the brand’s founder. He was traveling to California on one of his gypsetter adventures to explore local culture and do a lifestyle shoot for the upcoming formal launch of the Crude brand. That he traveled all the way to L.A. (when he himself lives in a resort town) for the shoot is probably a rather clear indicator that he himself is the type of gypsetter the Gypsetter watch is meant to be worn on. Alas, Greg did indeed design Crude Studio to first and foremost satisfy his sense of style. 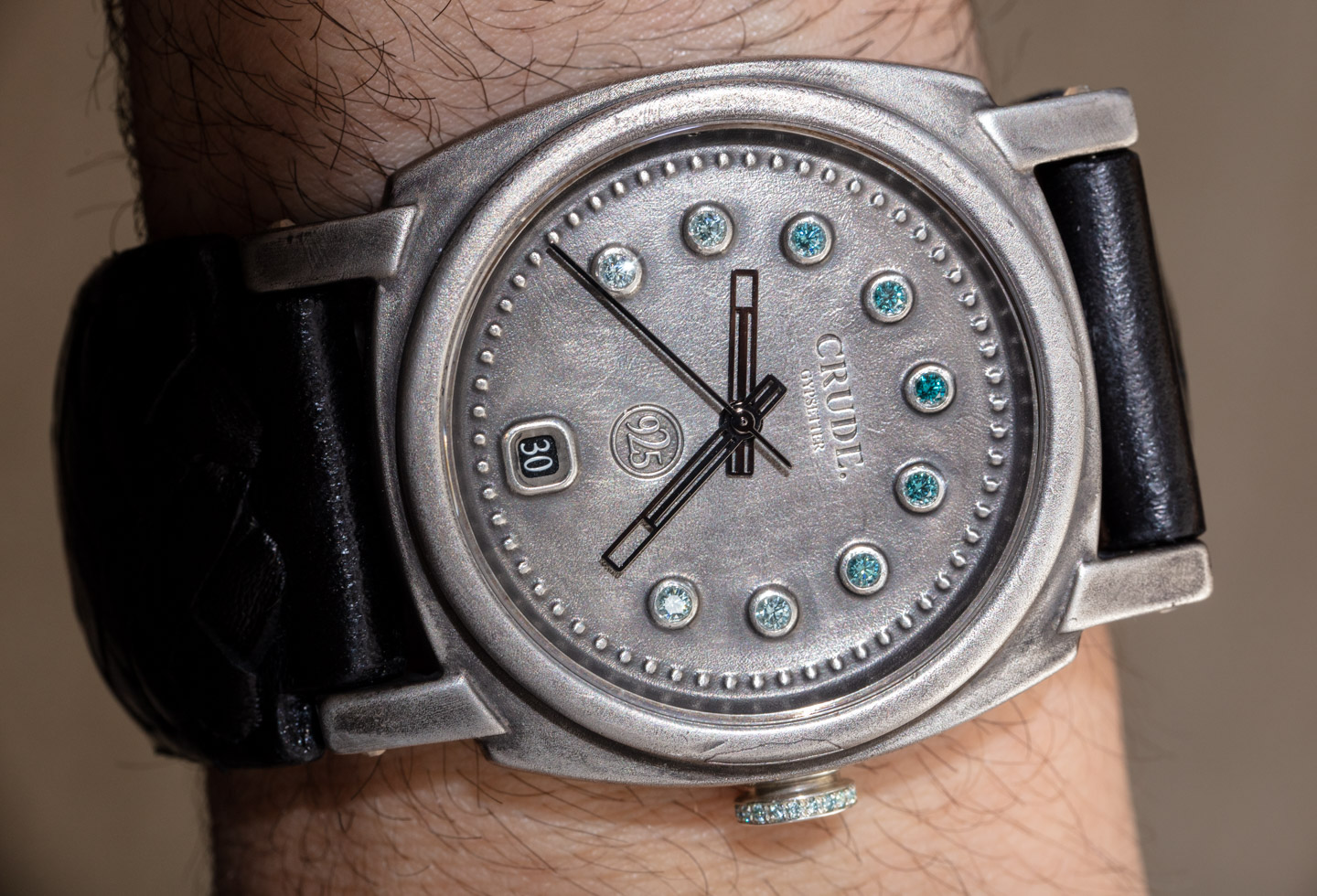 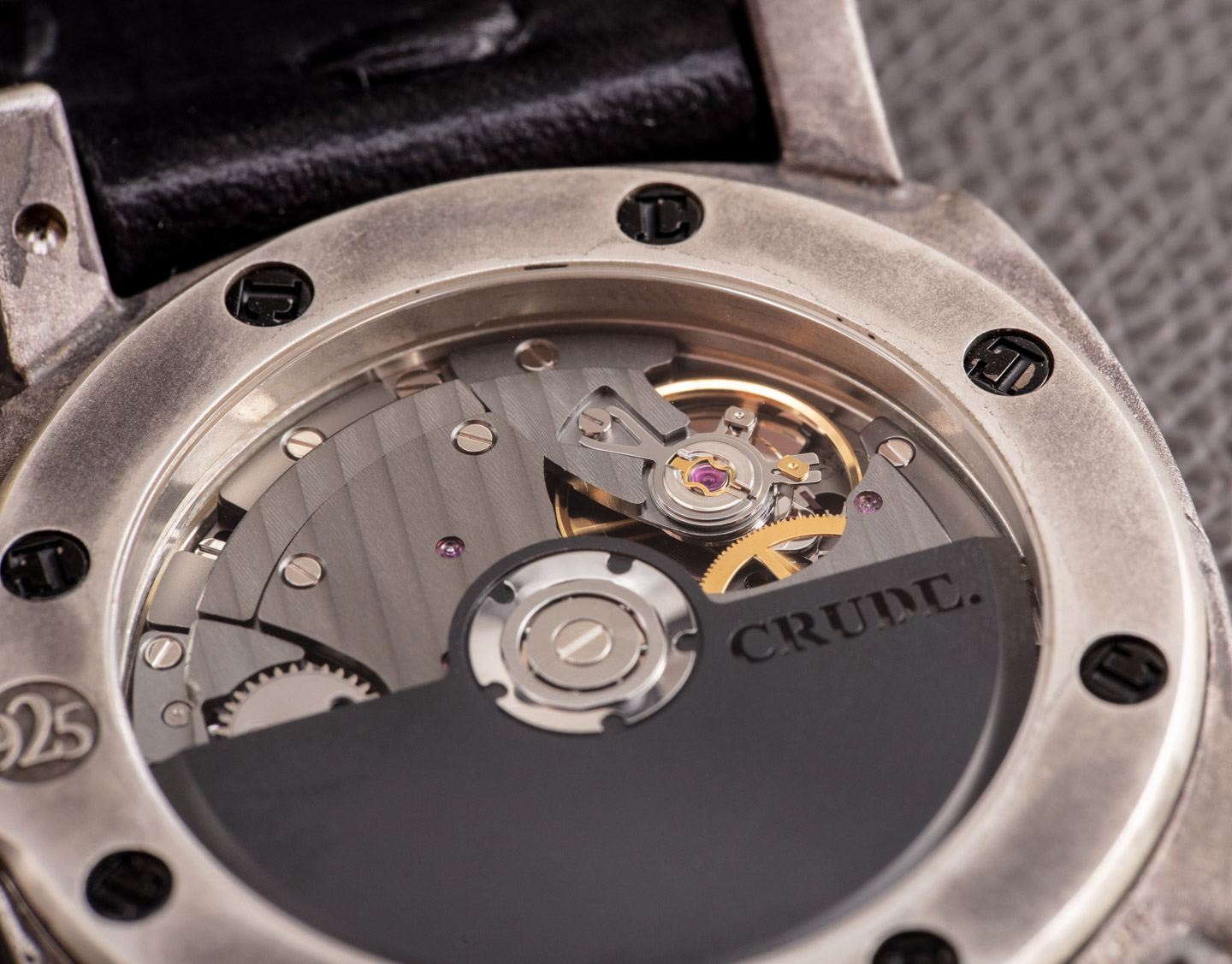 Several years ago, Crude’s founder relocated from Germany to Ibiza for a different life and change of pace. His primary business there is actually running a trendy hotel, which has allowed him to not only explore his own aesthetic and lifestyle preferences but also to observe those of people like him. Living and working in Ibiza was probably the best “gypsetter” education the entrepreneur could have hoped for.

Crude isn’t just a design concept but rather an atelier concept with its own facility. The Crude Gypsetter watch is unlike many traditional timepieces given its particular fashion theme, but it has all the materials, construction quality, and design attention that watch collectors are seeking. I become quickly fond of the Crude Gypsetter not after first seeing it, but rather after learning its story and wearing one for a while. The first thing anyone should notice about the Gypsetter watch is that all its visible parts are entirely bespoke. Nothing is an off-the-shelf part, and Crude spent considerable effort engineering and crafting the components that go into the watch. The world’s best watches all share this fact in common — they make use of highly original parts. 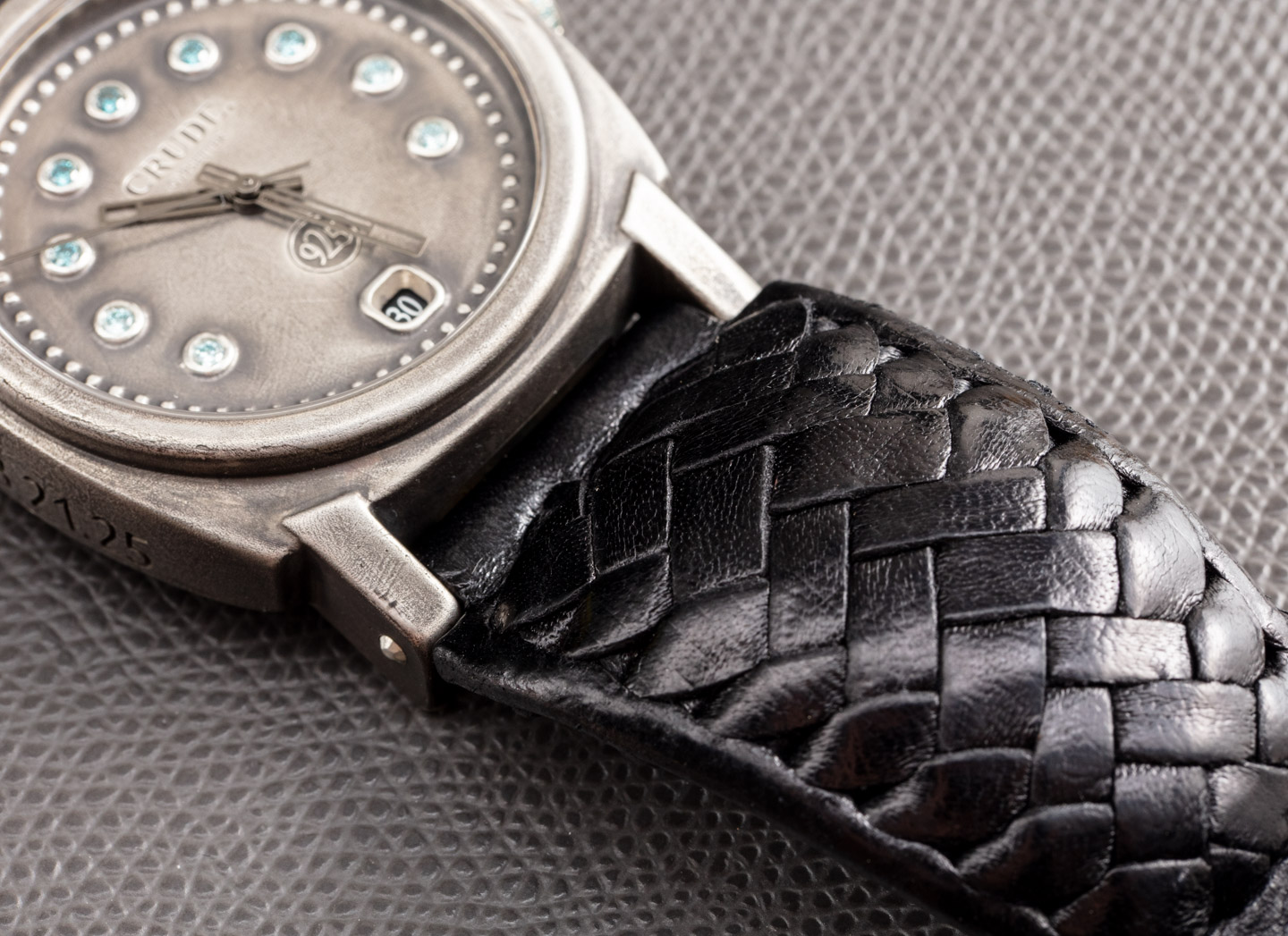 Visually, the most distinctive part of the Gypsetter watch is the case — and for good reason, since it is cast versus machined (more on that below). If you take the “Crude” name seriously (which the brand wants you to do), then you’ll understand the “raw,” “organic” style they are going for. For Crude, luxury isn’t about perfection but rather a “lived-in” look that is similar to the appeal of vintage goods and the interior design concept of shabby chic. The Gypsetter is a luxury watch in all ways, but it doesn’t go about evoking the typical clean Parisian-style of luxury much of the industry is known for.

The Gypsetter case is about 43mm-wide, 13mm-thick, and has a roughly 53mm lug-to-lug distance. It wears quite large thanks to the wide lugs, nearly wider strap, and overall presentation on the wrist. The strap itself is a thing of beauty, being like nothing I’ve seen before on a timepiece. Each leather strap is bespoke-made for each Gypsetter watch, matched to the size of the wearer’s wrist. The strap connects to 24mm-wide lugs but bows out to nearly 33mm-wide. It also has a tight weave design on the front but a more traditional wearing experience on the back. The strap feels more like something from a quality biker’s jacket than something from the watch industry. The Gypsetter watch wouldn’t be what it is without this special strap. I understand that Crude is also coming out with additional “vegan” straps in the near future for those who aren’t keen on cowhide. (I like the leather.) Note the bespoke spring bar hole caps which are just one of the many little interesting touches on the watch. 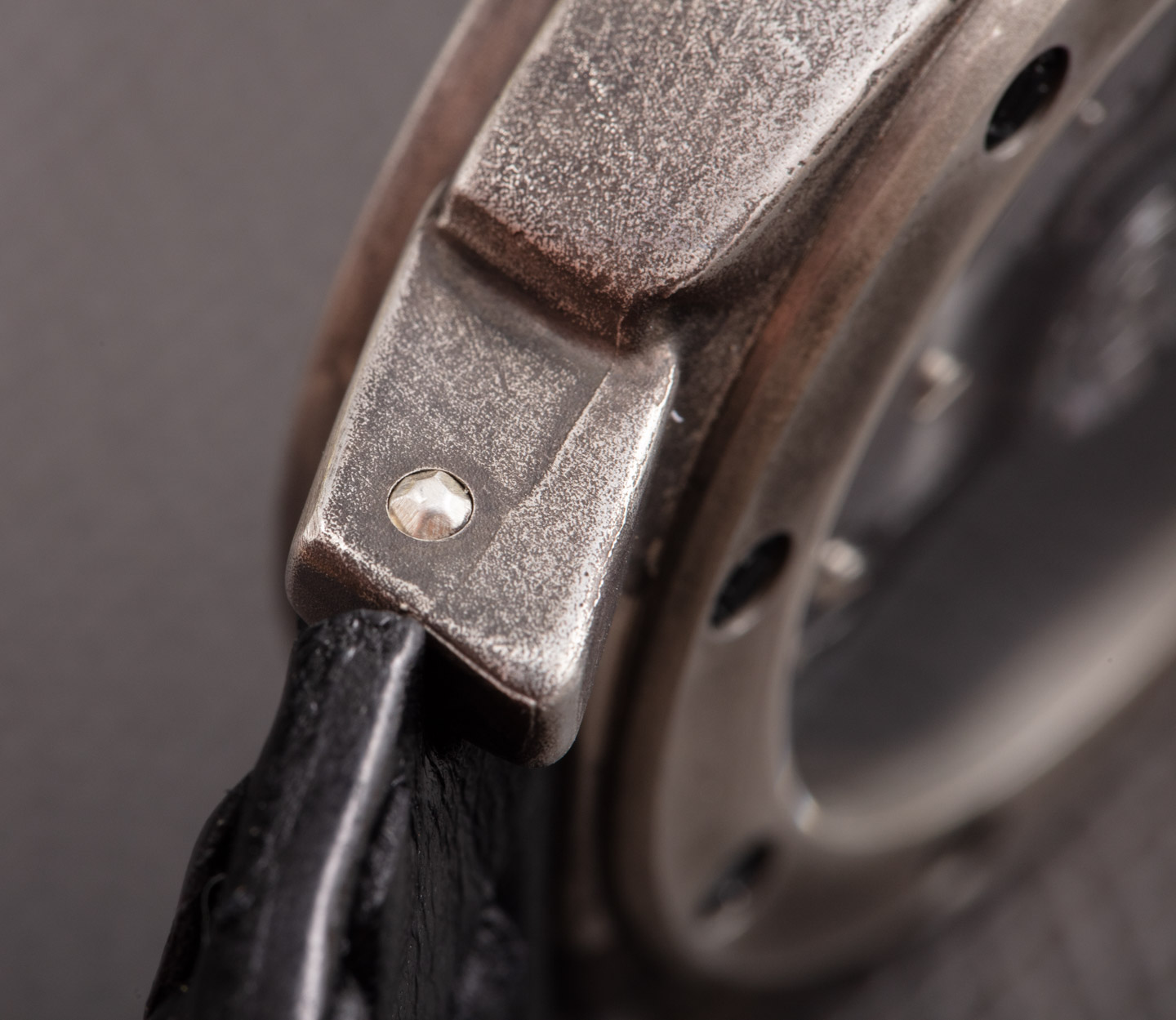 Each Crude Gypsetter watch case is produced from cast sterling silver. Neither of those things is common in today’s luxury watch space. Casting is a more ancient form of metalwork where liquid hot metal is poured into various molds. It creates an imperfect organic surface that is later often finished or polished. Casting has been made industrially obsolete mostly thanks to processes like metal stamping and machine milling, which is how most modern watch cases are born — and then, it’s polished. Crude goes against the grain by making their cases using a casting process and going for a “crude” look. The outcome is interesting and organic, just as the brand intends.

Then there is the matter of using 925 sterling silver as the case material. While gold is very popular as a watch case material, silver has not been popular since the days of pocket watches. Silver fell into disfavor when steel came around. Silver is more expensive than steel, and it’s also soft and prone to oxidation. Being in the air tarnishes silver unless it is polished. Today’s watch consumers use a different term for case oxidation and tarnishing: “patina-ing.” Bronze watches (for example) are popular because of how bronze oxidizes. If a tarnished case patina is now considered attractive, then why not re-introduce silver as a watch case material to complement bronze as a slightly more luxurious counterpart? No one but Crude has seemed to think of that until this point. 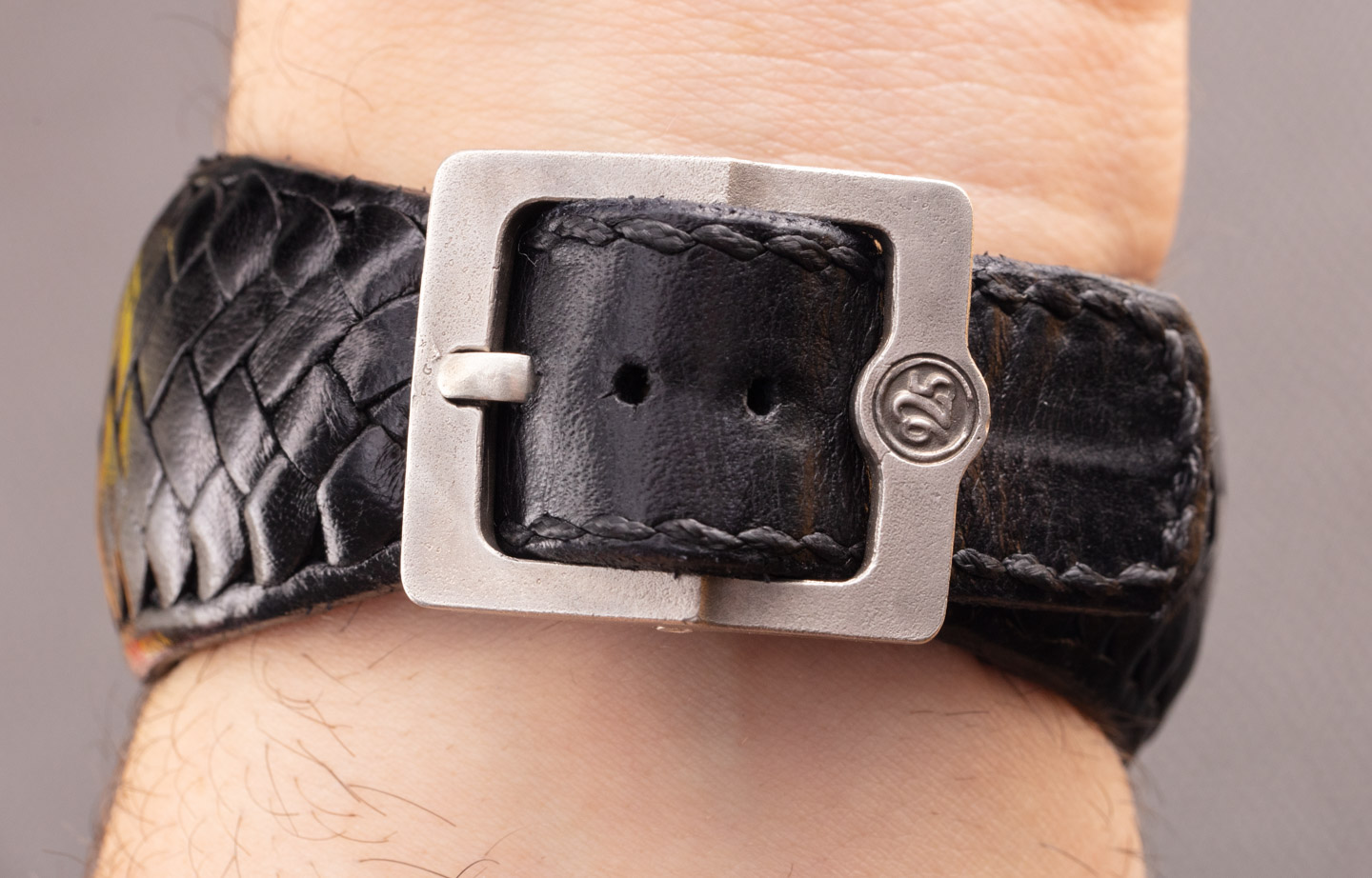 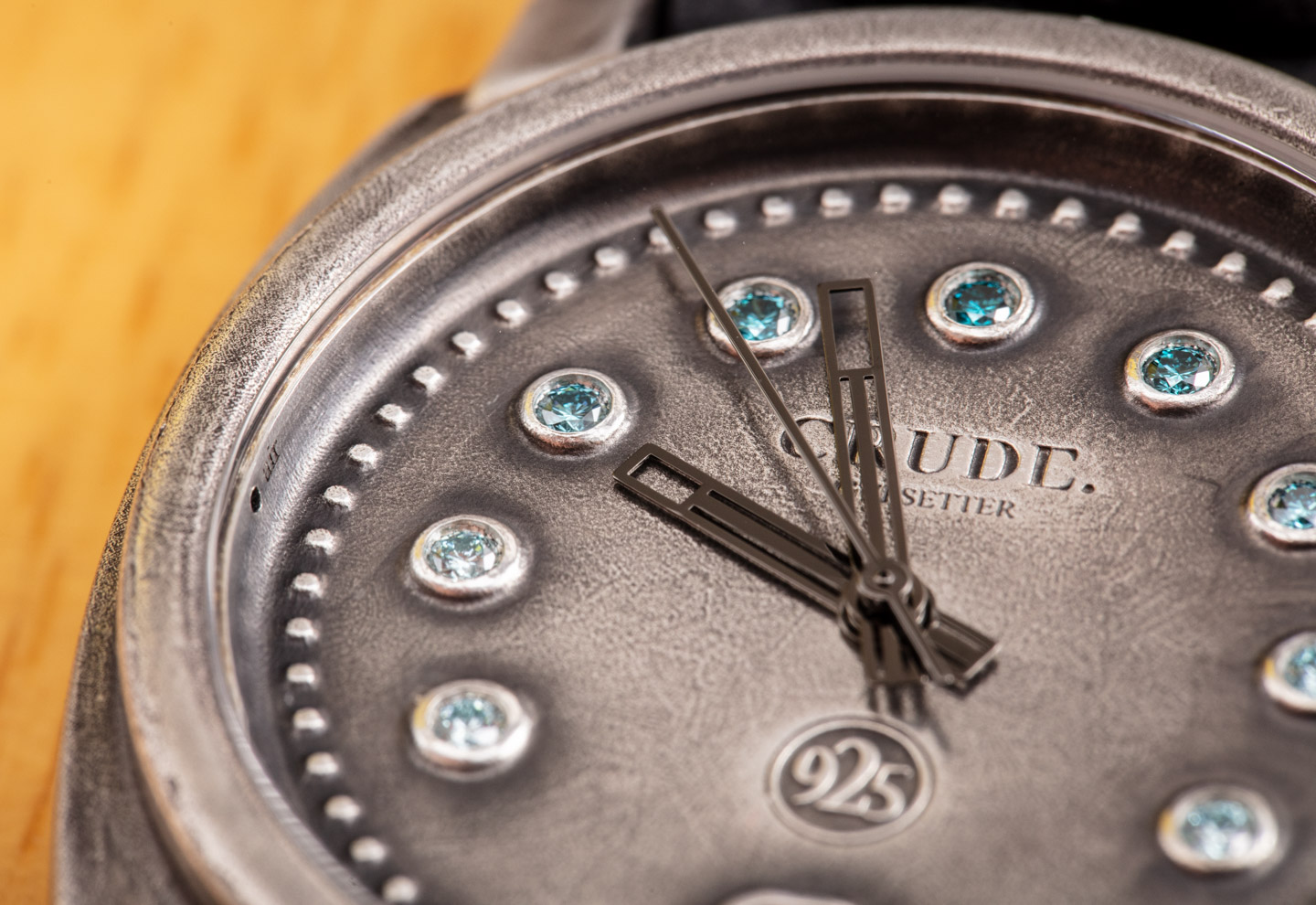 The cast case is also interesting because the dial is actually part of the large and heavy (a whole lot of silver) monobloc case. Only the caseback and crown at the added silver pieces that are attached to the larger one-piece 925 silver case. On the left side of the case Crude stylistically etches in a serial number, and then there is the option of precious stone decoration. Probably the most traditionally luxurious part of the Crude Gypsetter watch experience is the ability to put diamonds or other precious stones on various parts of the case.

This ability to adorn the Gypsetter actually helps give it a lot more relevancy as a luxury or jewelry item (which it inherently is). The Gypsetter has a few zones of customizable gem-set-ability. The first is nine of the hour markers. Then there is the ability to put stones on the outside periphery of the bezel. Crude can also put stones on the periphery of the crown and even stones on the matching sterling silver buckle (which is also made in-house by Crude). What makes the sparkle so effective, is precisely that it contrasts off of the raw surface of the silver. The combination of industrial finish with the glistening of stones is really nice. 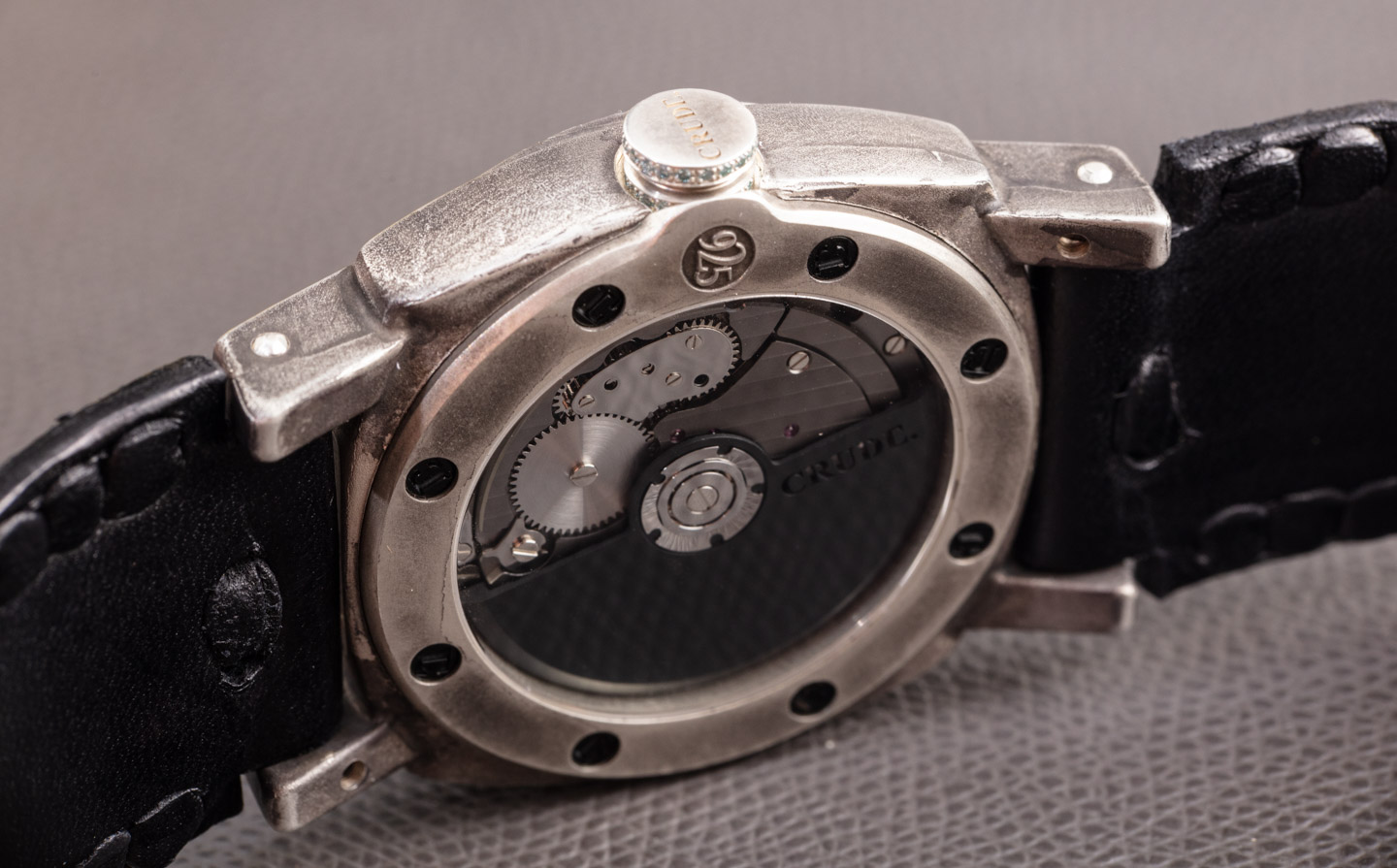 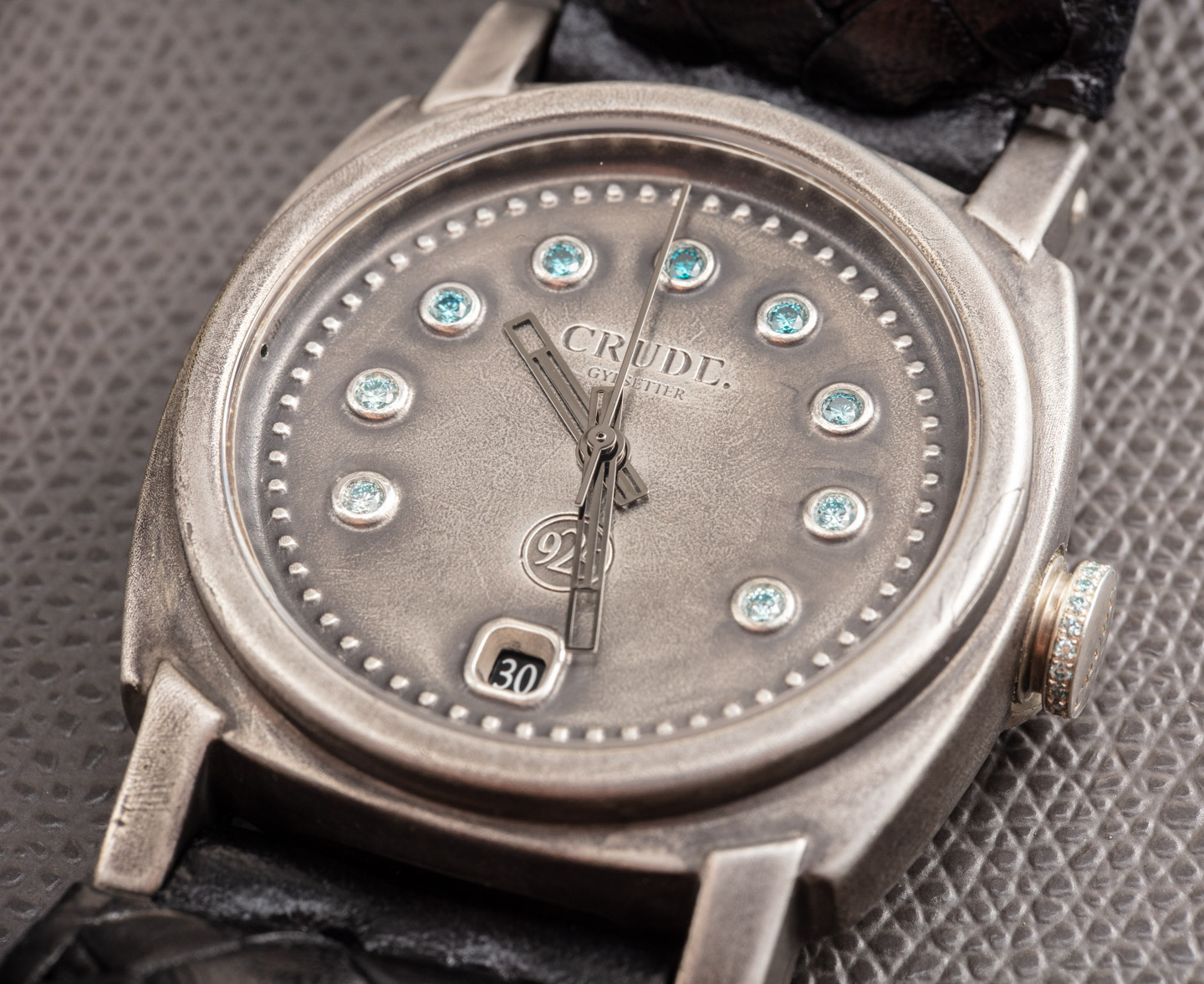 On this particular Crude Gypsetter watch, I recommend the idea of creating a gradient of stone colors on the dial — just to show off what the brand could do. The blue sapphire stone at 12 o’clock is the darkest shade of blue, which then gets progressively lighter down the dial. I think it makes for a really attractive effect.

The raised markers on the Crude watch dial are effective and visually interesting. The overall dial is very well-conceived, even if it is from a newcomer brand. I appreciate the dial’s symmetry, sense of depth, textures, and legibility. The only thing I felt Crude could have done better is with the contrast of the hands. The hands are a unique design but polished, which makes them a bit harder to see. I have to say that, over time, the hands grew on me, but I still think that is the easiest thing to improve in subsequent generations of Gypsetter waters. Having said all that, Crude certainly achieved a lot more with their first product than the majority of new watch brands I see. 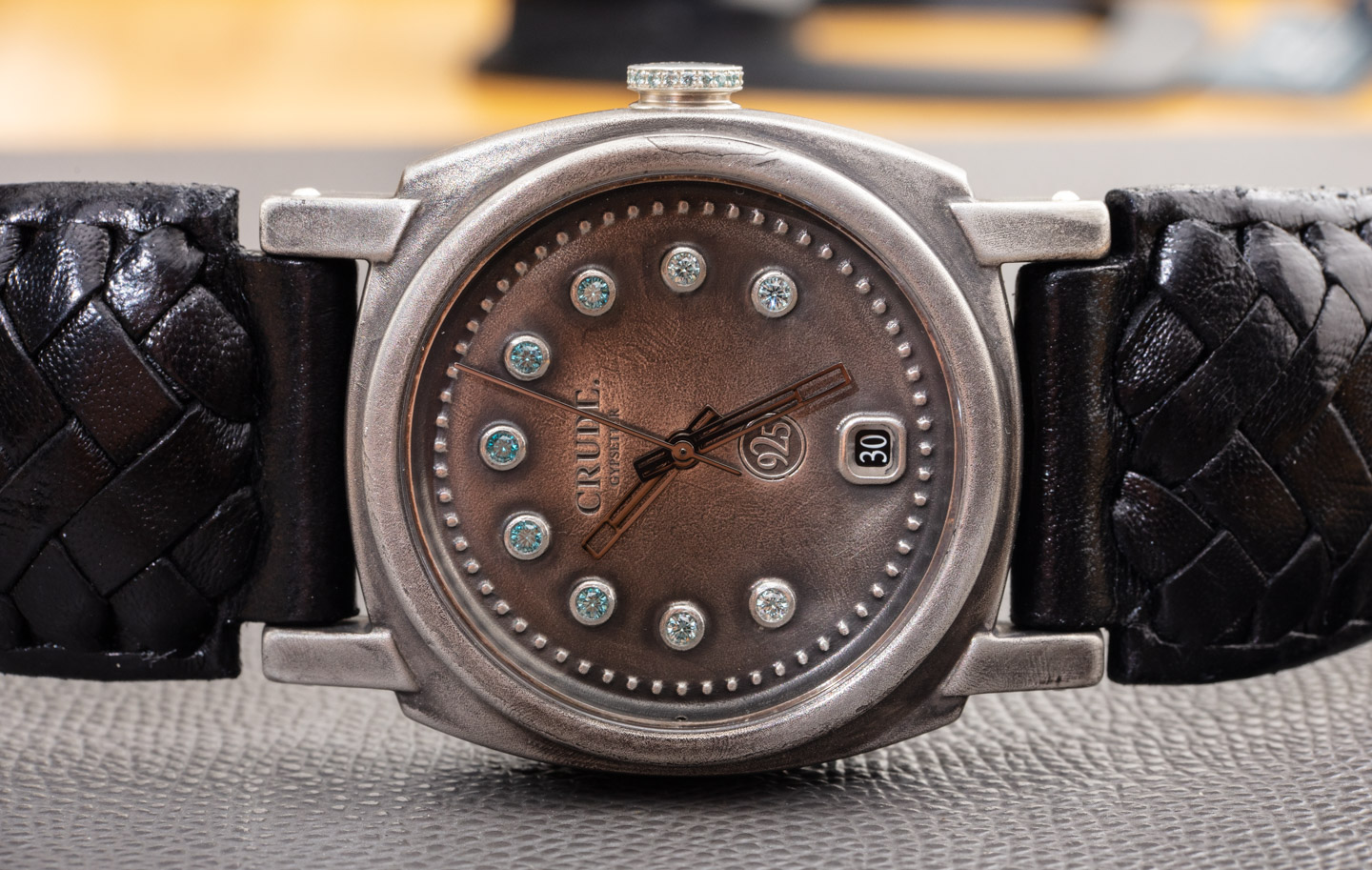 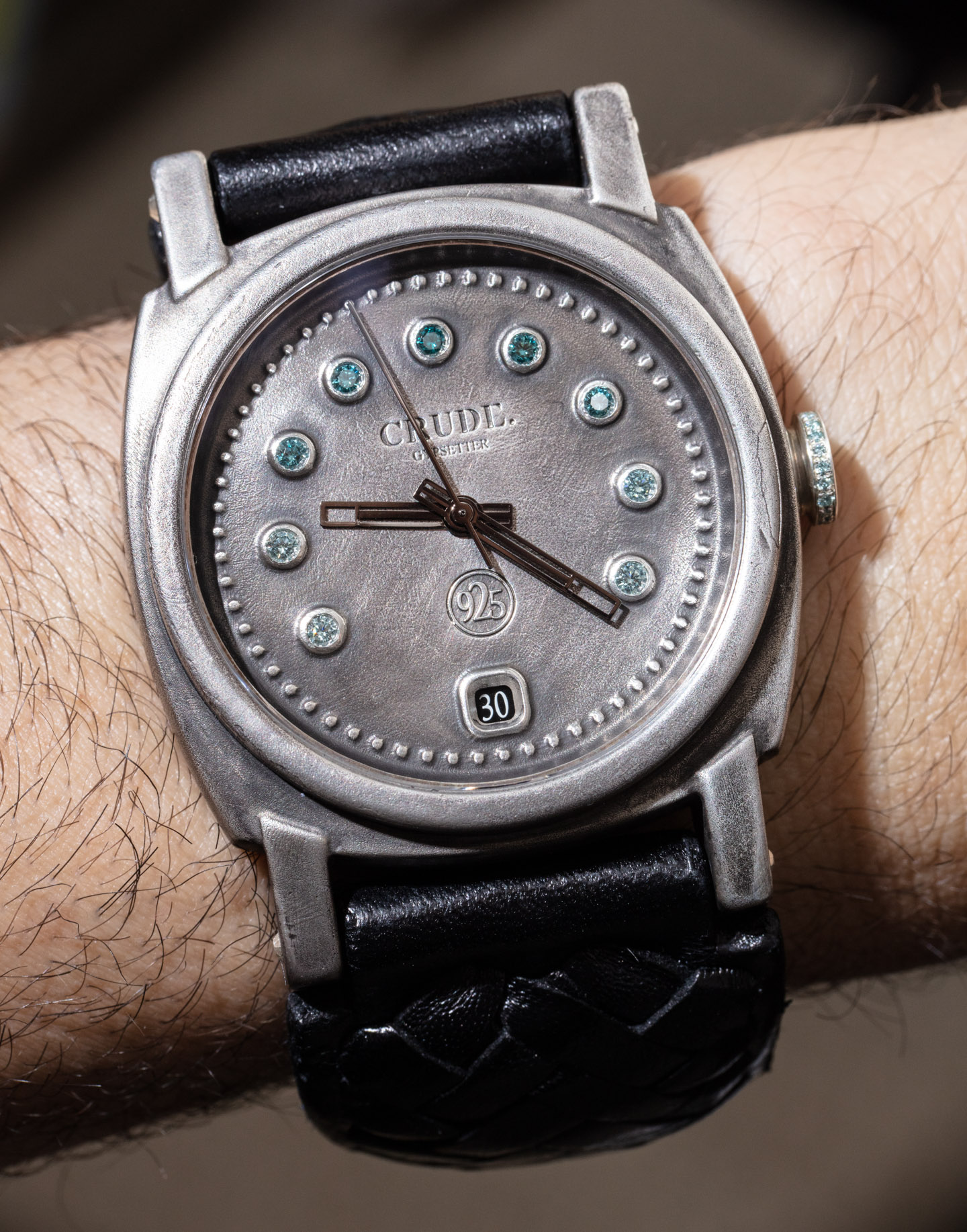 Over the dial of the Gypsetter is an AR-coated sapphire crystal (with another one over the caseback), and the case is rather durable being water-resistant to 100 meters (without the need for a screw-down crown). Inside the Gypsetter is a Swiss Made Eterna caliber 3935A automatic. The 4Hz, two-day power reserve movement is given an attractive dark gray color and finished with Côtes de Genève stripes. Over the movement is a bespoke Crude automatic rotor that is a neat-looking matte DLC-coated black half-circle with a discreet Crude logo on it. Matching the rotor are black DLC-coated screws that affix the back to the case. I think one of the best reasons why Crude chose Eterna 39XX series movements is that they are wide enough to appear as though they are meaningfully-sized for the case. ETA movements (for example) would have been mostly much smaller (something with enthusiasts tend to gripe about).

Crude Gypsetter watches aren’t cheap, but neither are they overpriced given the details, materials, number of unique parts, and exclusive production volumes. In my opinion, brands like this that very much sing to particular lifestyles are part of the future of the luxury watch space. There simply isn’t enough room for 40 Rolexes out there. In my opinion, the near-term future of the watch industry is that it is going to be dominated by about 30-40 major global brand names, and then the rest of the market will be filled in with micro/independent/boutique brands that can cater more closely to particular lifestyle needs and interests. In that sense, Crude will speak to many clients, but it’s part of a larger developing herd of like-minded companies. The Crude Gypsetter watch has a starting price of 9,600 Euros and as seen has a retail price of 13,400 Euros. Learn more at the Crude Studio website here.

Necessary Data
>Brand: Crude
>Model: Gypsetter
>Price: 13,400 Euros as reviewed
>Size: ~43mm-wide, ~13mm-thick, and ~53mm lug-to-lug distance.
>When reviewer would personally wear it: As a hip fashion statement for a watch that really wears like a bracelet.
>Friend we’d recommend it to first: We all have those friends who wanted to be Hell’s Angels and can afford some of the accouterments and motorcycles. This is for him (or her).
>Best characteristic of watch: Extremely good execution on theme, highly original design, and innovative use of casting and silver case material. Ends up being a fashion statement, men’s jewelry, and a fine timepiece all at once.
>Worst characteristic of watch: Strap needs to be custom-fitted for optimal comfort. Hands aren’t bad but are one of the weaker aspects of the piece.