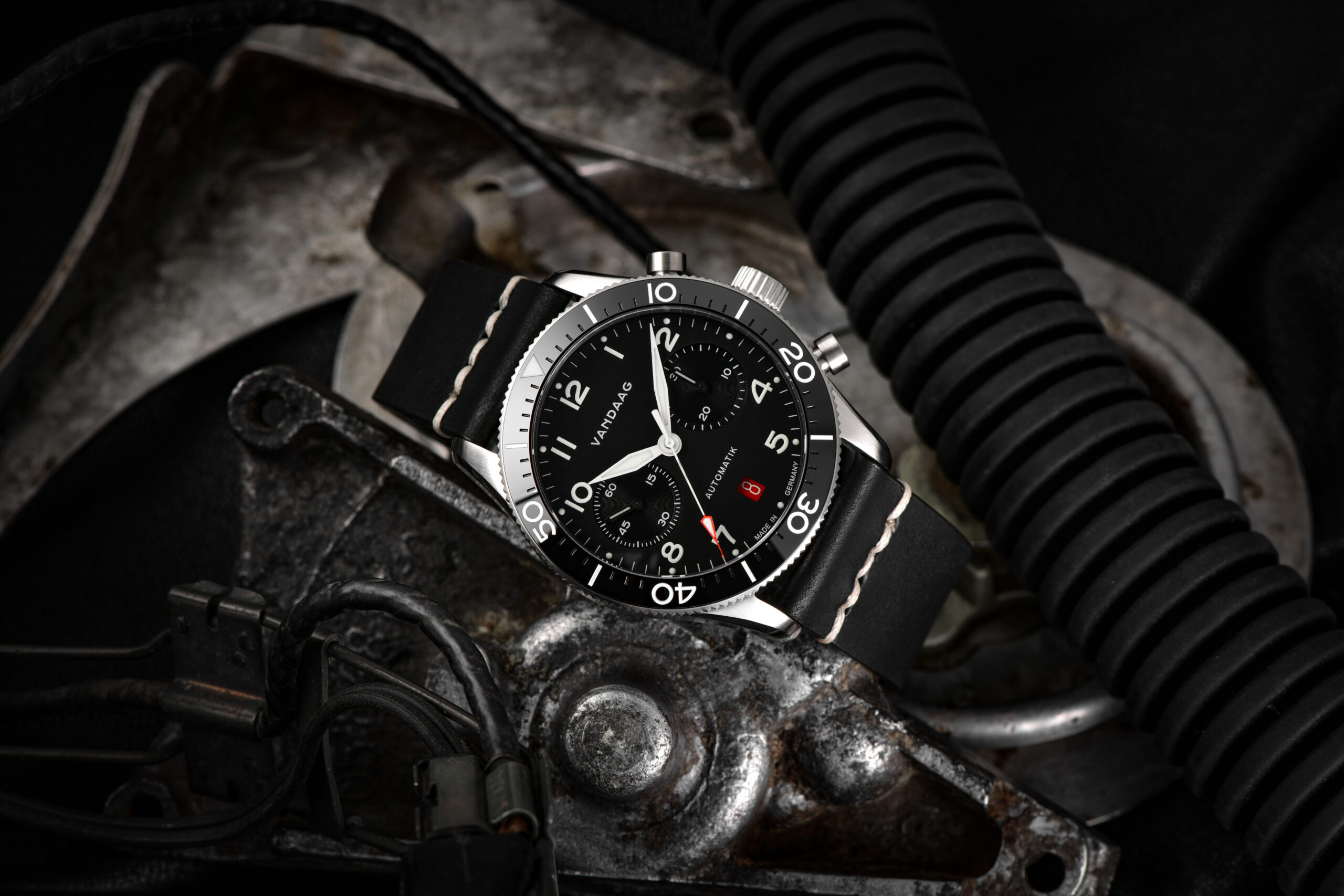 As any historian will confirm, any sufficiently developed enterprise — watchmaking included — will, over a long enough timespan, develop distinctive epochs. Those old enough to remember the Quartz Crisis that kicked off 50-odd years ago attest to how watch brands great and small survived (or perished) on account of what surely must have seemed to the traditional (and largely Swiss) world of horology, lightning-fast and seismic changes. So too has the advent of global communications, mass media, and the internet changed timekeeping. The ubiquitous smartwatch and vast democratization of electronics, many of which can tell the time, led many observers to predict tough sledding ahead for the world’s watchmakers. Thus, 20-some years since Al Gore invented the Internet, it has actually proven to be a boon in many ways for watchmaking innovation. 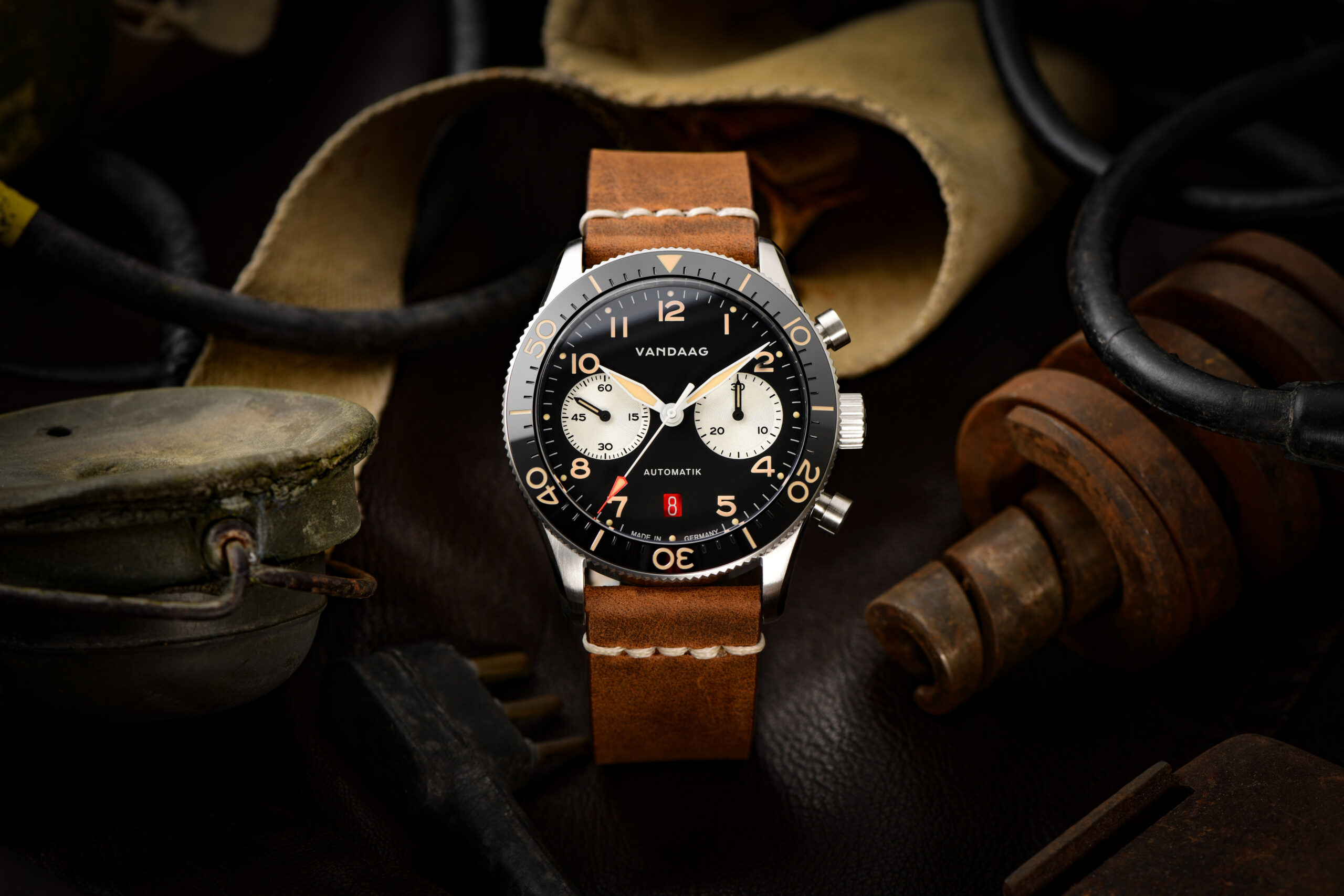 And thus we arrive at VANDAAG. The North German brand hailing from Oldenburg in Lower Saxony is about as far away as you can get from that other hub of German watchmaking, Glashütte, yet once again, this geographical disconnection is much less daunting thanks to the modern connectivity that helps brands like VANDAAG flourish. Backed by a Kickstarter campaign, VANDAAG heads down the path of advanced watchmaking, stepping into the arena with its first automatic chronograph, the Schallmauer. 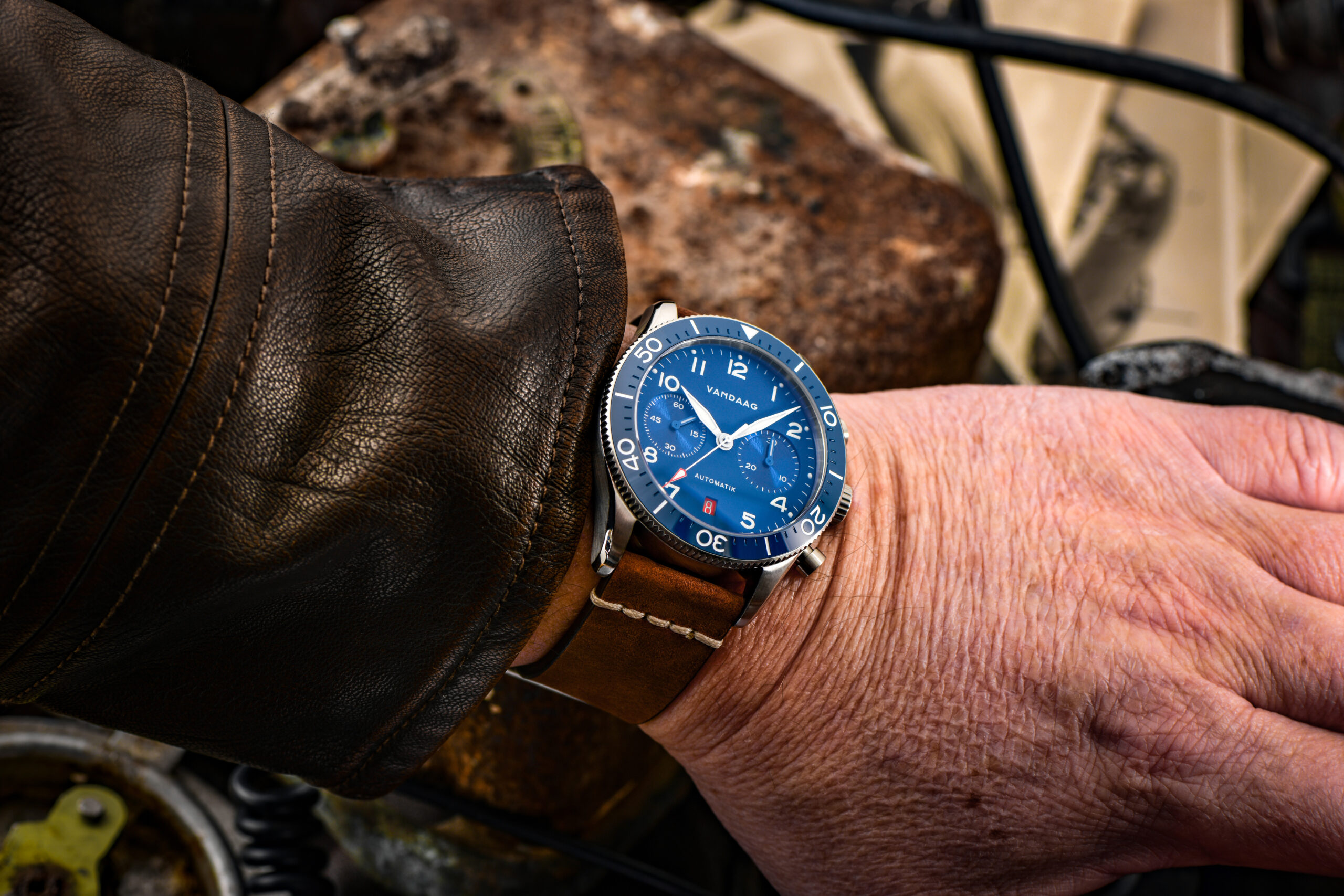 Launched on March 8th, the Schallmauer (German for “sound barrier”) is a bi-compax pilot’s watch that, thanks to a few small but not insignificant details, manages to stand out in subtle ways. Broadly speaking, it’s hard to deviate too much from the standard design guidelines of pilot’s watches without ending in another style’s territory. But the Schallmauer succeeds thanks to the custom-made red date wheel and a dial that manages to avoid two of the typography cardinal sins: chopped numerals and boring font. To the former point, a divisive aspect of many military and pilot’s watches is the tendency to cut off numerals for the placement of dial elements. Maintaining symmetry, the Schallmauer succeeds in proffering large, legible subdials at the 3 and 9 positions while leaving the main numerals untouched. This attention to detail extends through the fonts employed around the dial and bidirectional ceramic bezel. Sans-serif numbers are clear and symmetrical, yet also have a vaguely Art Deco charm. The minute markers tracked around the bezel echo those printed on the dial, making precise timing a cinch. 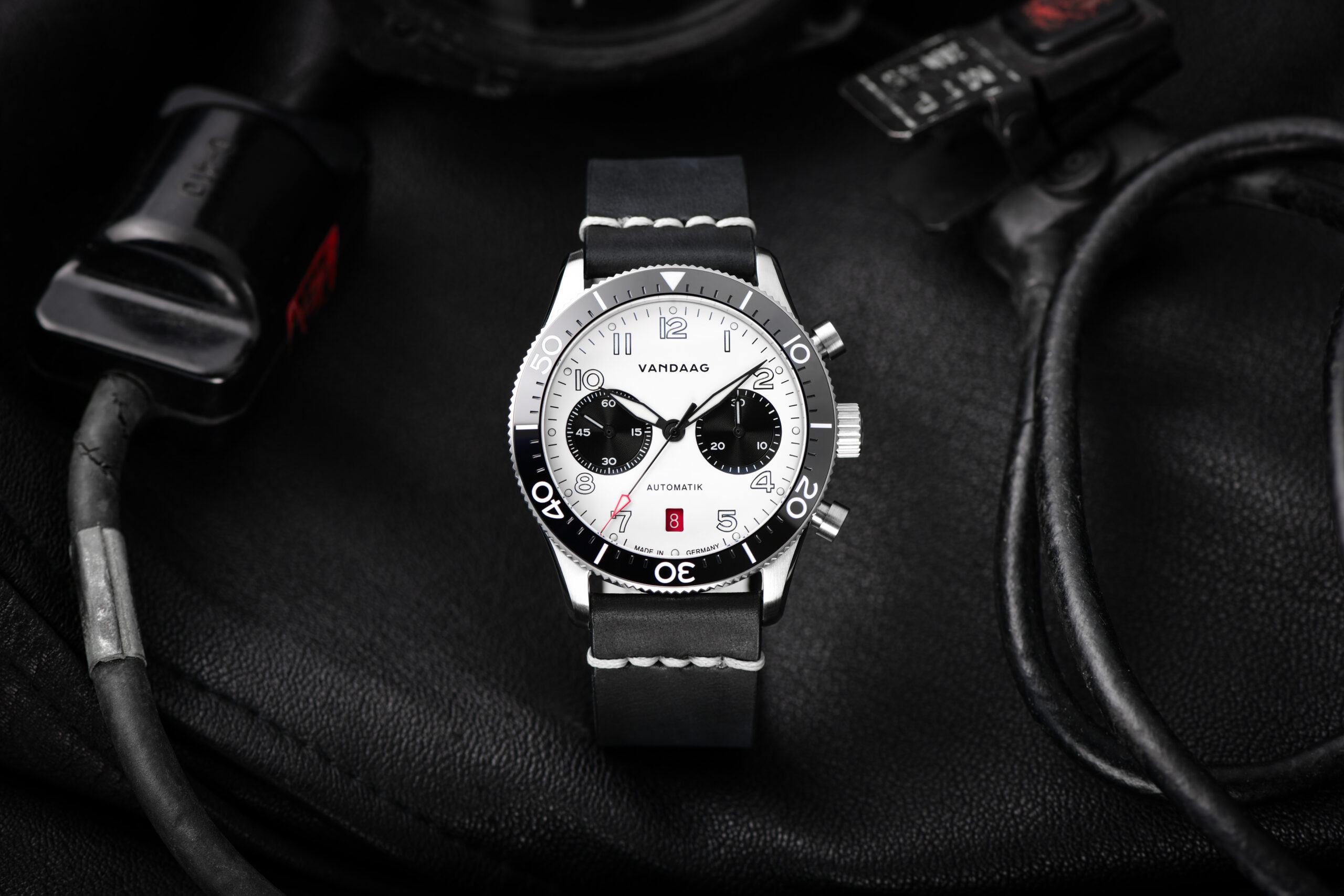 With so much practicality at work in one place, you might think the Schallmauer is, well, a little boring. Not so. Thanks to an impressive five reference models — a lot for a microbrand in just its second year — the Schallmauer takes on new life depending on the chosen color scheme. Each variant is contained in a 42.5mm stainless steel case offering 100m of water resistance. Sure to be a favorite is the all-black dial/black bezel combo thanks to the way the red date window pops captivatingly. Hold it up side by side with the vintage-inspired “Old Radium” variant, presented on brown leather and with high-contrast subdials, and it’s hard to believe you’re looking at the same watch. Of course, it would be borderline criminal to neglect the inclusion of a panda or blue variant chronograph, and here, VANDAAG is in the clear. Each one is at once familiar and exciting, scratching the bi-compax itch many collectors developed thanks to bigger luxury brands like Tudor, IWC, and Carl F. Bucherer. 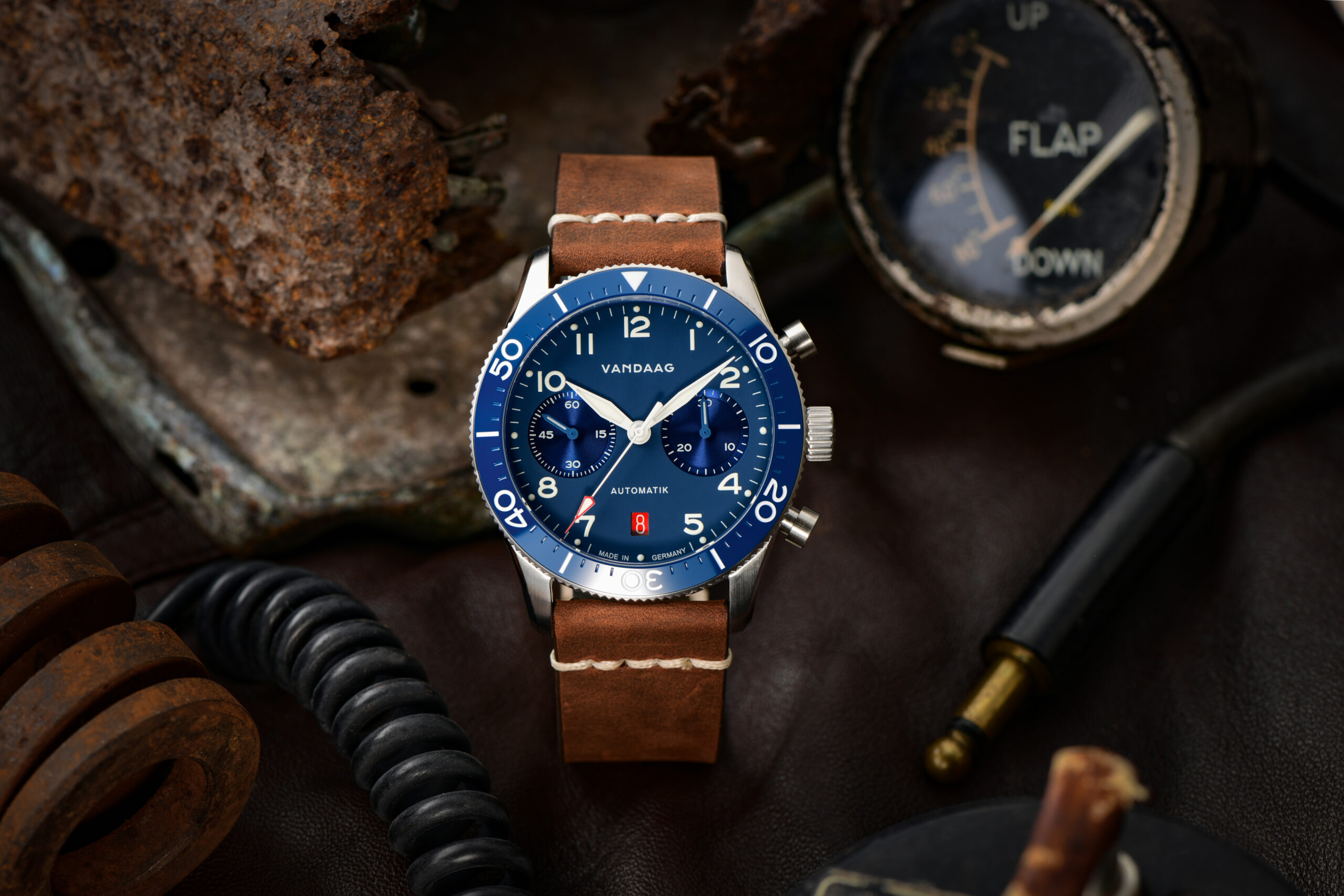 Flipped over, the Schallmauer exhibits another notable feature not found on many other watches — a custom black galvanized rotor that only adds to the Schallmauer’s sleekness and professionalism. Helping power the Swiss Sellita SW510 movement, it performs with an accuracy of +/- 5 seconds per day, just one second off from Chronometer performance. The 62-hour power reserve makes it a true weekend watch, although the intrepid wearer knows it’s best to bring along a rugged, functional piece like the Schallmauer on any weekend foray.

Running through the offerings, the Schallmauer is available on a limited basis and with structured pricing. Following Kickstarter incentive pricing, it is available in the following tranches:

Phase A kicked off on March 8th while Phase E concludes April 6th. Each variant is limited to just 100 copies. Following the Kickstarter launch, the remaining pieces will be available on VANDAAG.de for Є1,699 each. Please visit the Kickstarter page here and the brand’s website here.