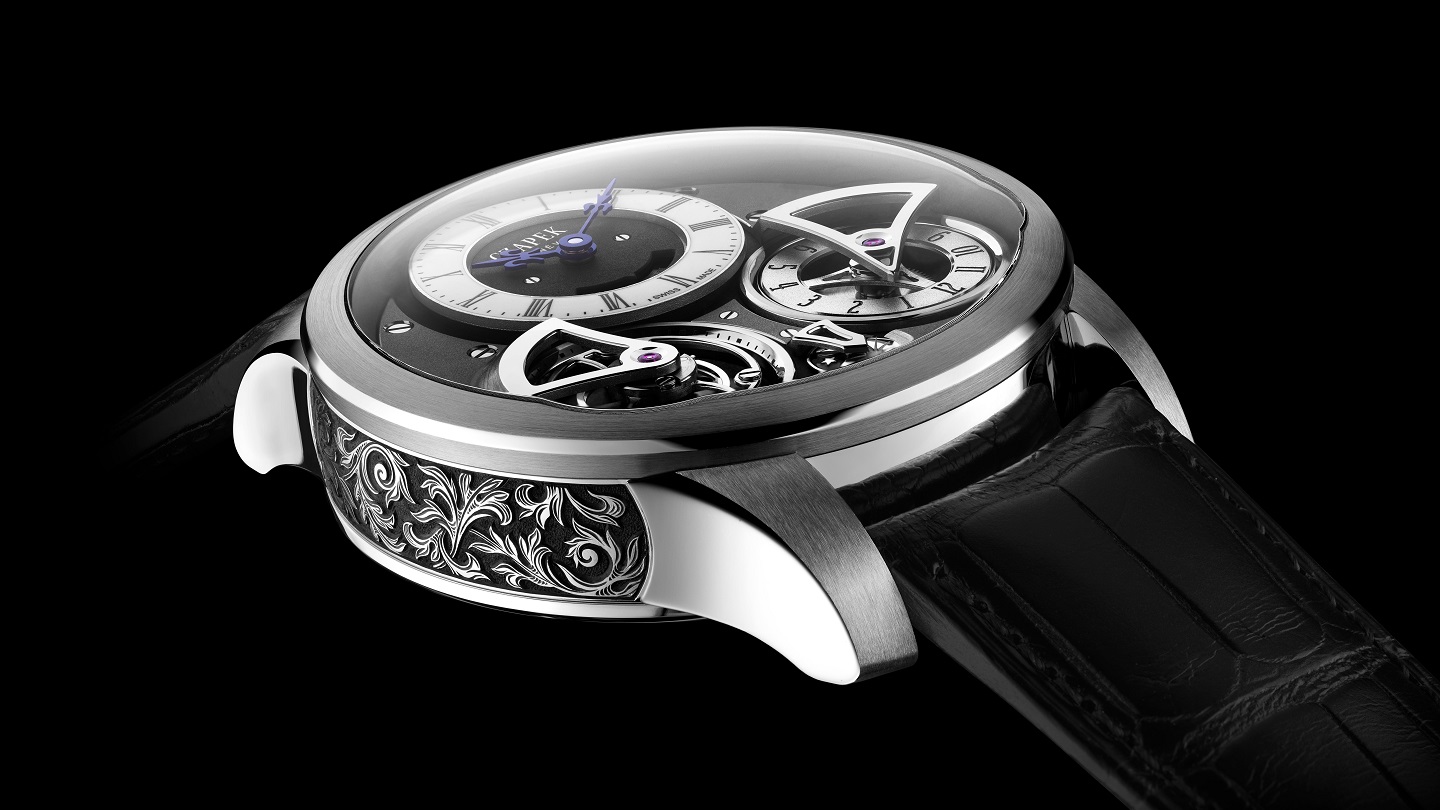 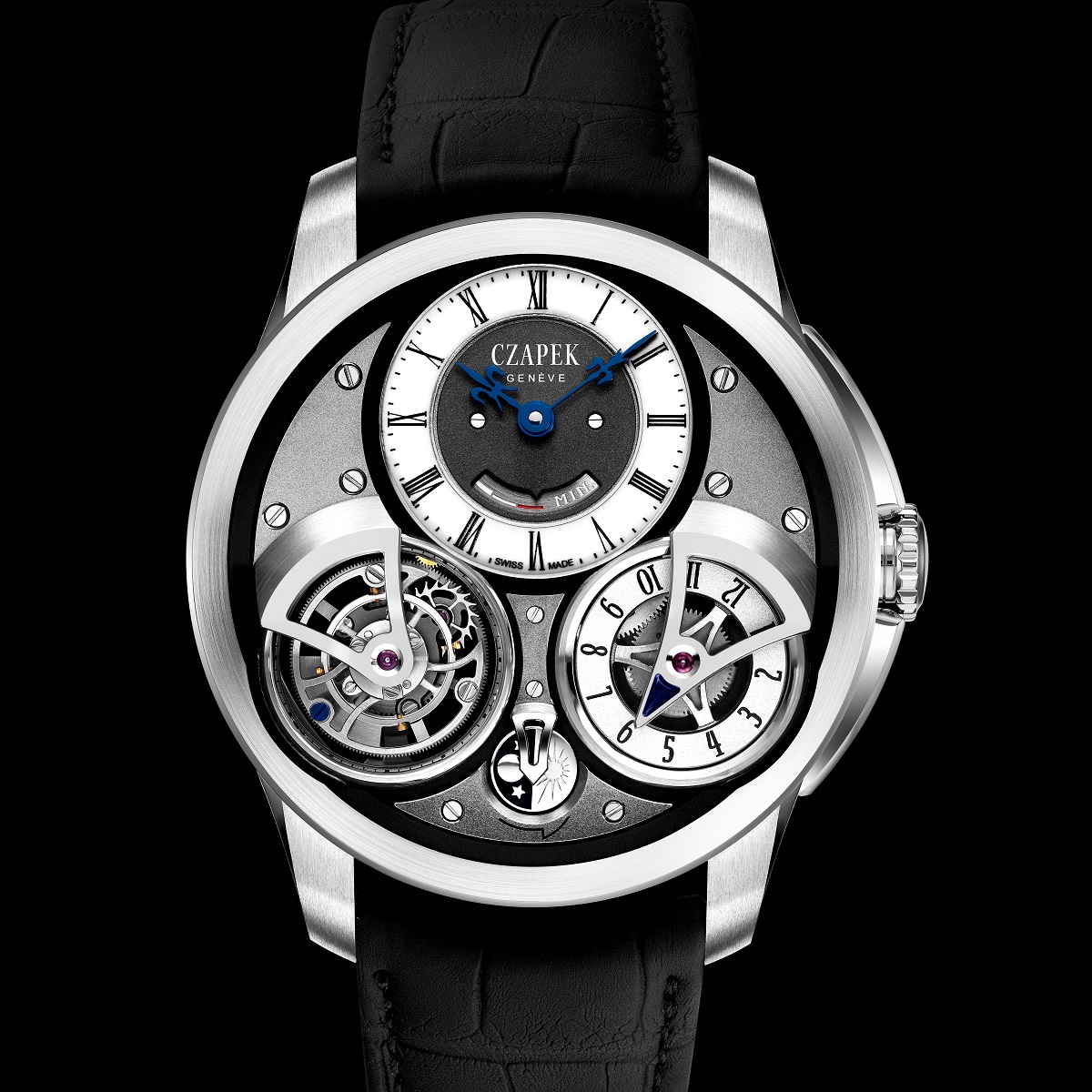 Swiss Czapek & Cie have been known for their impressive range of complicated timepieces. More recently, their controversial crowdfunding adventure caused a bit of a stir, but from it popped the revitalization of a historical brand (read all about it here) that has produced a number of cool timepieces that manage to channel a contemporary DNA while still maintaining a uniquely old-school vibe. New for 2018, Czapek & Cie have unveiled a new model to their second watch collection – the Place Vendome Tourbillon Suspendu “Ici et Ailleurs” with “Acanthus Leaves” (a mouthful, I know). Featuring two new engraved case designs, the watch adds a new visual aesthetic to an already uniquely designed watch.

Czapek & Cie released the first iteration of the Place Vendome Tourbillon Suspendu Ici et Ailleurs early last year to positive reviews. Personally, I was a lot more excited about the watch than I thought I would be. I felt the line departed from a more traditional approach to watchmaking and branched into the more futuristic and modern landscape. The movement pulled off an impressive amount of technical accomplishments in how it was able to display a Tourbillon, Dual-Time Display, Day/Night indicator, hour disc, and power reserve without feeling cluttered or convoluted. 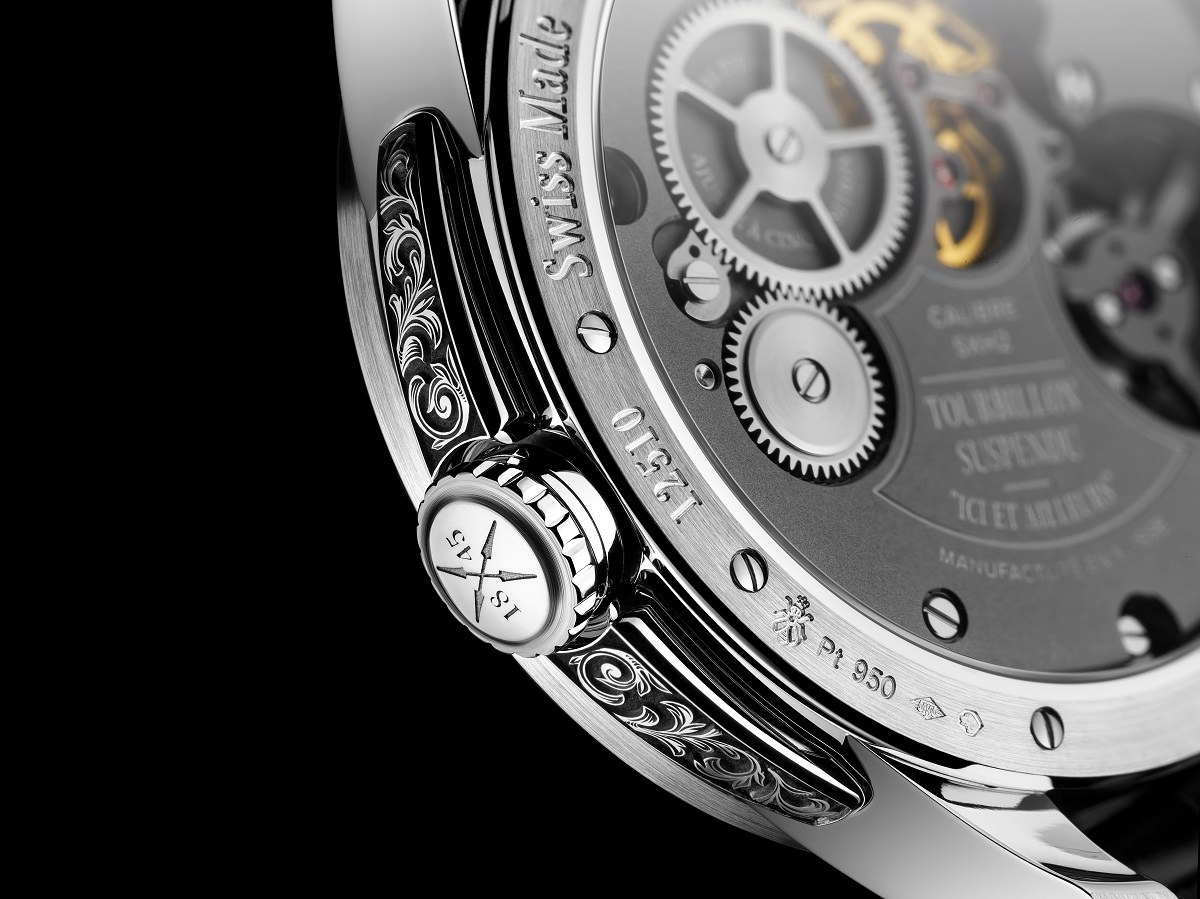 The 43.5mm watch will come in two flavors: a “Platinum Pt950” case, or a 5N Rose gold case. Both watches are engraved by the Swiss artist Michele Rothen Rebetez, a well-known, and immensely talented engraver known for pieces from Vacheron Constantin, AP, and McGonigle. The engravings are of “Acanthus leaves” and after a bit of Google-fu, I learned they are a staple to Roman art and architecture – fitting when paired with the dial. A small detail I appreciated was the inclusion of engraved pushers against the brushed edge of the right side of the case, giving the watch some added spunk.

The dial is something that I feel is a feat of the brand’s attention to legibility and complication. With the number of features this movement has, it would have been incredibly easy to lose them when designing a way to display them. Let’s start with the Grand-feu enamel ring. Tying in the Roman-influenced case engravings is the Roman numeral local time indicator. The only thing I would have changed on this watch is the handset for the local time, as the Fleur-de-lys blued gold handset feels out of place (to me at least) against so much Roman influence. Enclosed in this ring is the power reserve indicator in the form of a thin disc with bar indicators. Moving down to the 4:30 indicator is another disc that displays the home time, but in lieu of hands, a bridge points to the time on the disc. 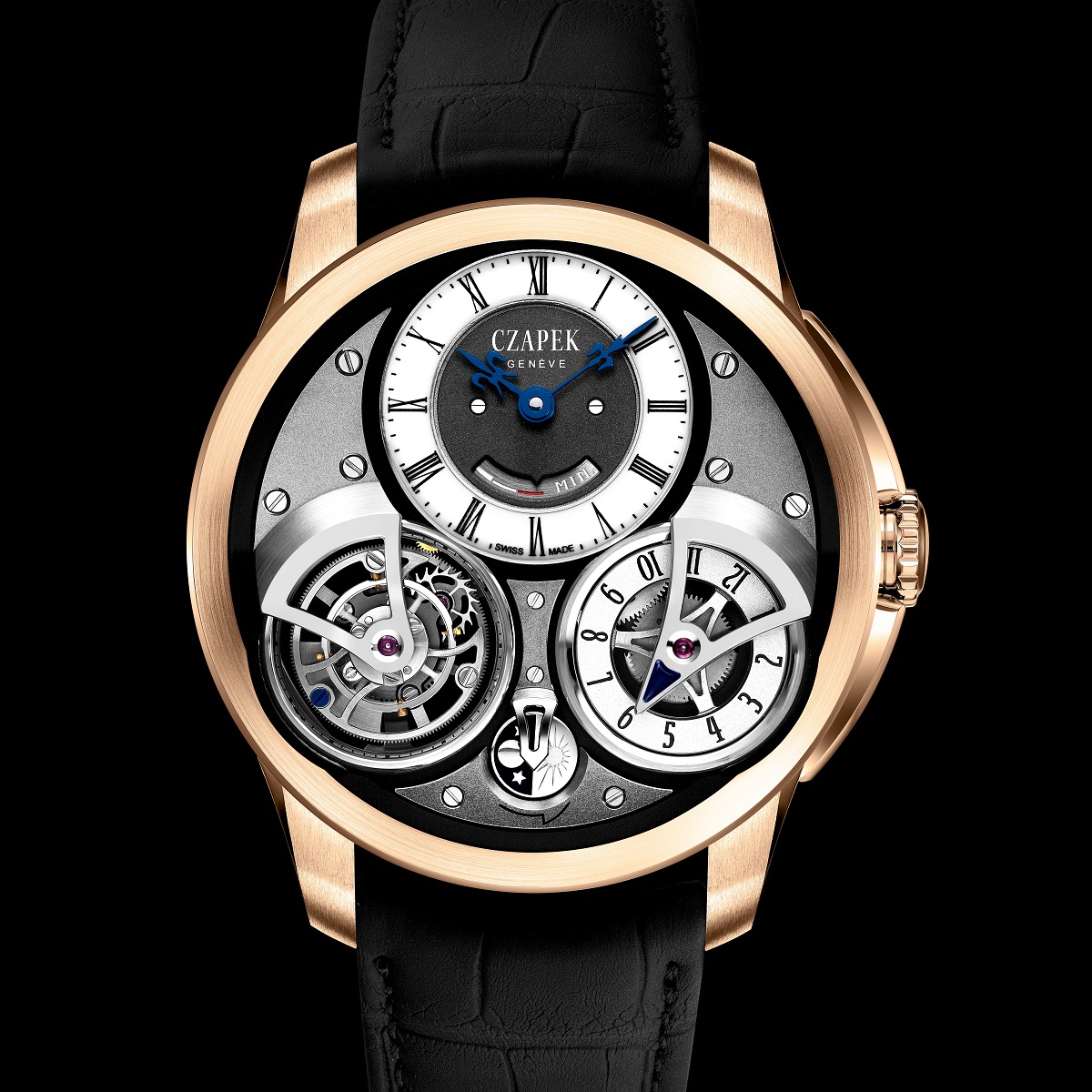 At 6 o’clock we have a day/night indicator prominently displayed by another disc, and interestingly enough it turns counterclockwise. Which brings us to the star of the show at 7:30, the tourbillon. Held in place by a polished upper bridge, the 60-second tourbillon provides a blued screw instead of a seconds hand – something I feel more modern tourbillons should embrace. Tying the entire dial together is a sandblasted plate, giving the watch a bit more of an industrial-modern look instead of the dressy-aggressive look of its previous iteration.

The movement powering all these functions is Czapek’s Caliber SXH2 “Haute Horlogerie” hand-wound movement – developed in a partnership with Chronode. The 3Hz movement is on full display through the sapphire caseback, and features a power reserve of 60 hours on a single barrel. The back of the movement is finished with circular beveling and black sand-blasted bridges all tied together by a sandblasted mainplate (noticing a trend here?). While not as interesting as the dial, Czapek & Cie didn’t skimp on giving us tiny mechanisms to look at. 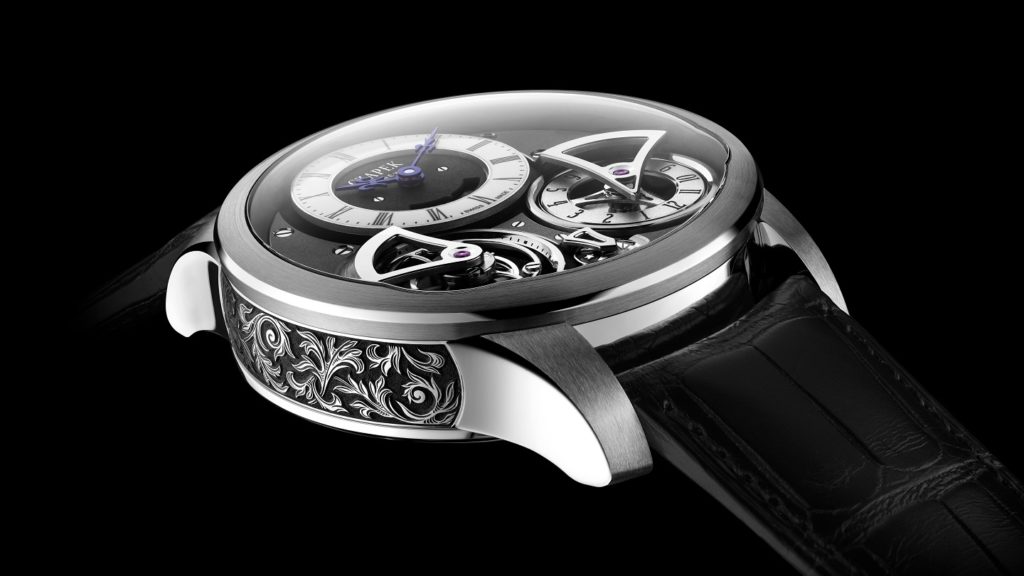 Overall, this really is a stunning timepiece. I’ve always been a fan of well-done engraved cases, and I have been more than welcoming of the increase in quality engraved offerings over the last few years. For a relatively newly-relaunched brand, Czapek & Cie have proved to be a force when it comes to beautiful and technically excellent offerings in a space that’s often dominated by bigger fish.

The watch will only be available on “special order” and the price for the the Place Vendome Tourbillon Suspendu “Ici et Ailleurs” with “Acanthus Leaves” will be 120,000 CHF in Platinum, and 107,000 CHF in Rose Gold. czapek.com