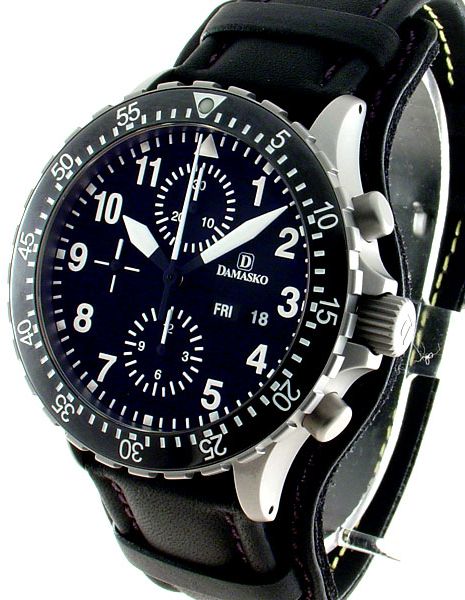 Superman never really had much competition. He had some villains and of course there was kryptonite, but no one ever challenged him for Supermanliness. Well, the Sinn 757 has been called a superman of watches. It is tough and functional, has lots of powers, and boasts plenty of innovation (I think Superman’s powers were innovative at one point). To a degree it stood out, even from other Sinn watches, but recently someone has challenged the Sinn 757 at its own game.

Go ahead and call the Damasko DC66 a competitor and a copy to the Sinn 757. Both Damasko and Sinn are German watches companies, both watches look similar, and have what are essentially Valjoux 7750 movements(though the Sinn 757 has a heavily modified version). The Damasko is a clear reiteration of the Sinn, but that is ok. The ripe landscape of watches allows for some repetition when a fruit so bold as the 757 is in high demand. The Damasko DC66 fills a spot enhancing the look fo the Sinn 757 by flattering it, while posing as a worthy alternative at the same time.

Like Sinn’s Tegimented steel, Damasko uses a special process of ice hardened steel that makes it 4 times harder than normal stainless steel, up to about 700 vickers. They are the first to admit that Sinn makes cases harder, but explain that Sinn’s process just hardens the surface creating an “eggshell” effect, while the Damasko process hardens the entire case. This might be true, but I am not sure what the effect really is. Suffice it to say both the Sinn 757 and Damasko DC66 feature specially hardened cases which while different, offer similar durability above and beyond normal 316L steel.

Like the Sinn, the Damasko DC66 features a special gasket system in the pushers and crown to prevent against debris and water entering, along with protecting the watch from shock and damage. Both watches also feature antimagnetic cases because of the soft iron cores. Neither of these watches have any lack of technology or features making them hardcore rugged companions.

Both watches are touted as aviator watches, but are really so much more. The legibility and bi-directional rotating bezels make them functional as both diver and aviator watches. The bund strap on the Damasko (available on the Sinn as well) would need to be switched out for diving though. Each watch is very versatile, handsome, and based on a classic look invented in some part by Sinn, which will look good forever. Both watches have their differences however. I think the Sinn has a bit more character to it, which has benefits and drawbacks. The Sinn modifies the Valjoux 7750 movement to remove the seconds subdial unless you are using the chronograph. It also indicates the date, but the not the day of the week. Alternatives, the Damasko fully utilizes each feature of the Valjoux 7750 with three subdials, the date, and date of the week (with an interesting placement a bit below the right center, and thankfully opting for the white on black lettering).

The Damasko DC66 while unique, is a very conservative looking watch. Dial placements and fonts are no nonsense. You get what you see, and you understand it immediately. It is a tool, cool looking but a tool. The Sinn is a stylized instrument. You don’t intend on the intrigue of having German engineering on your wrist, but it is in unintended side effect of this watch. I predict that Sinn watches will enjoy a bit of what Panerai has enjoyed that last 10 years. That is the state of becoming fashionably haute, by just being different and good as what you so. Already, France based Bell & Ross started out by rebranding Sinn watches before coming up with their own designs, and you can see how far the BR-01 got them; but I digress…

The Damasko DC66 is a bit less expensive than the Sinn 757 but hard to get (not available from its authorized dealer at this time). One is available right now on eBay, and I highly recommend you take a look. The auction started as next to nothing, but I am sure it will end up at a great value below the $2,200 retail price.