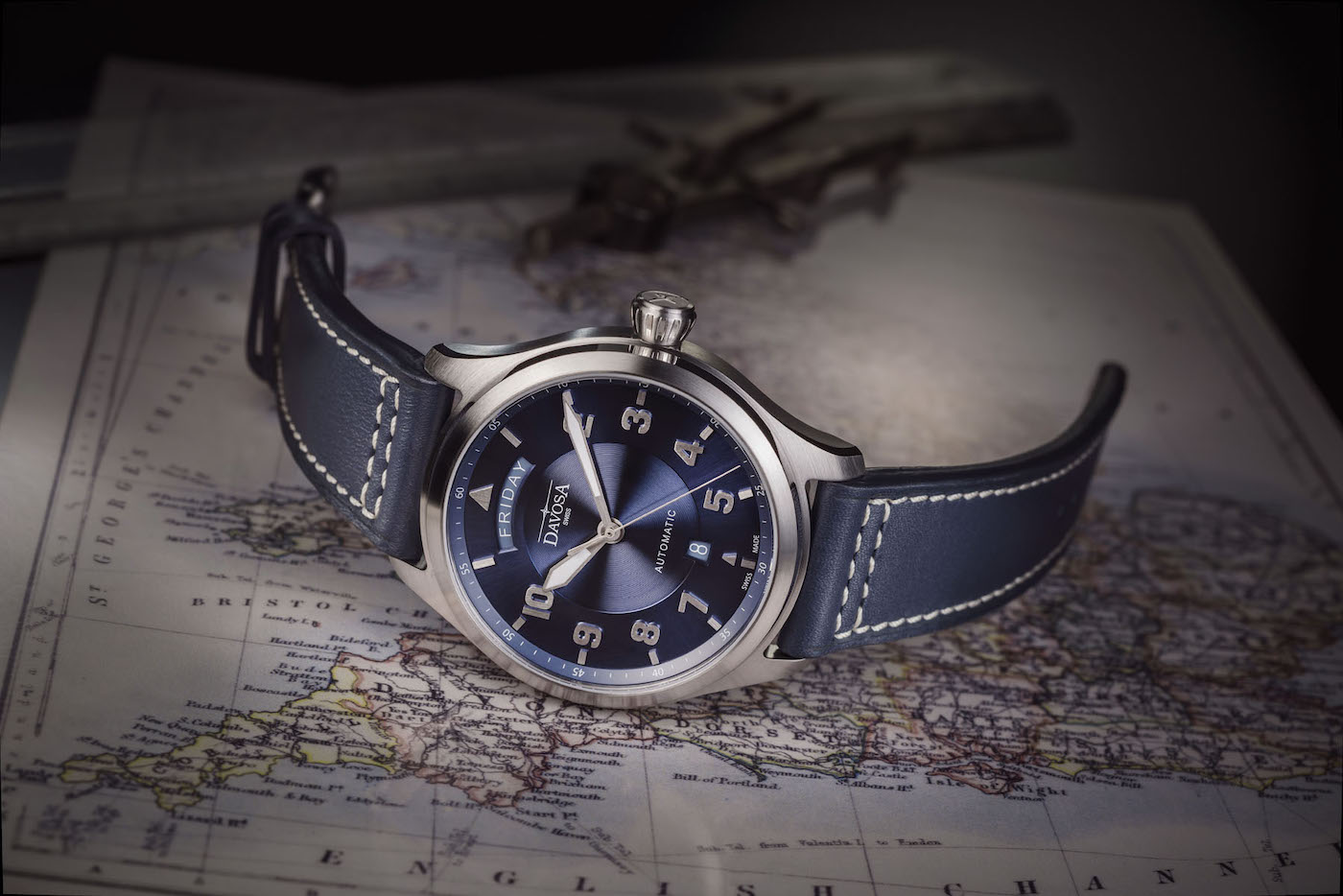 The Davosa Newton Pilot Day-Date Automatic Watch is a handsome, highly legible watch that brings a rich aviation history aesthetic to a dressier piece. While the Swiss independent brand Davosa may well be known for its highly functional, robustly made tool watches, this piece, with its clear nods to the cockpit, is quite opulent by Davosa’s standards. 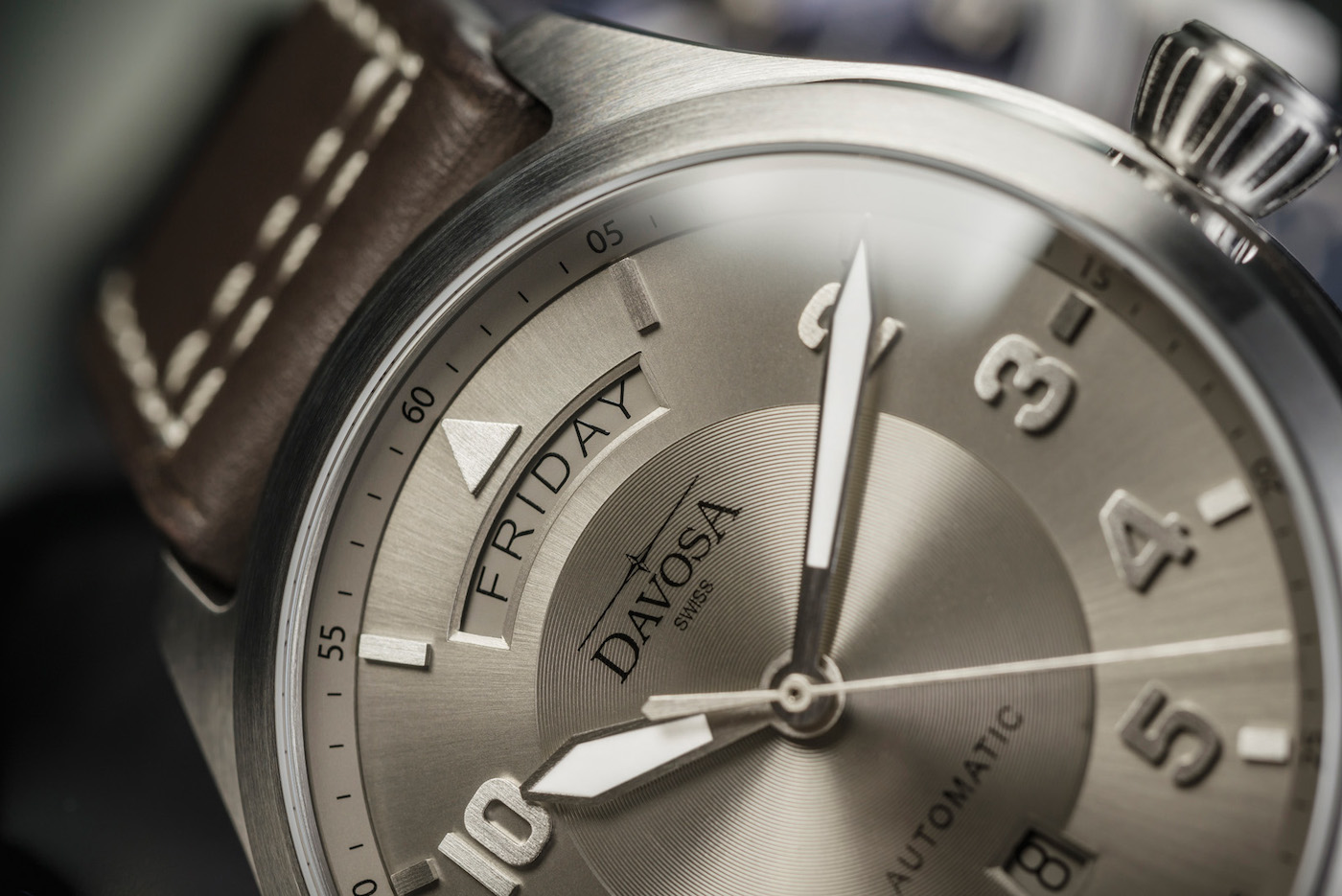 This effect is achieved mostly thanks to the sunray dial, which instantly adds a more luxurious vibe to the watch because it reduces legibility. That’s not to say any of these three options from Davosa are hard to read, per se, but when you’re designing a tool watch, its utility comes first. Making a decision that doesn’t have a hugely negative effect in the name of aesthetics doesn’t sound like the greatest crime on Planet Earth, but when it comes to product design it can be regarded as such if it directly contradicts the remit of form following function. 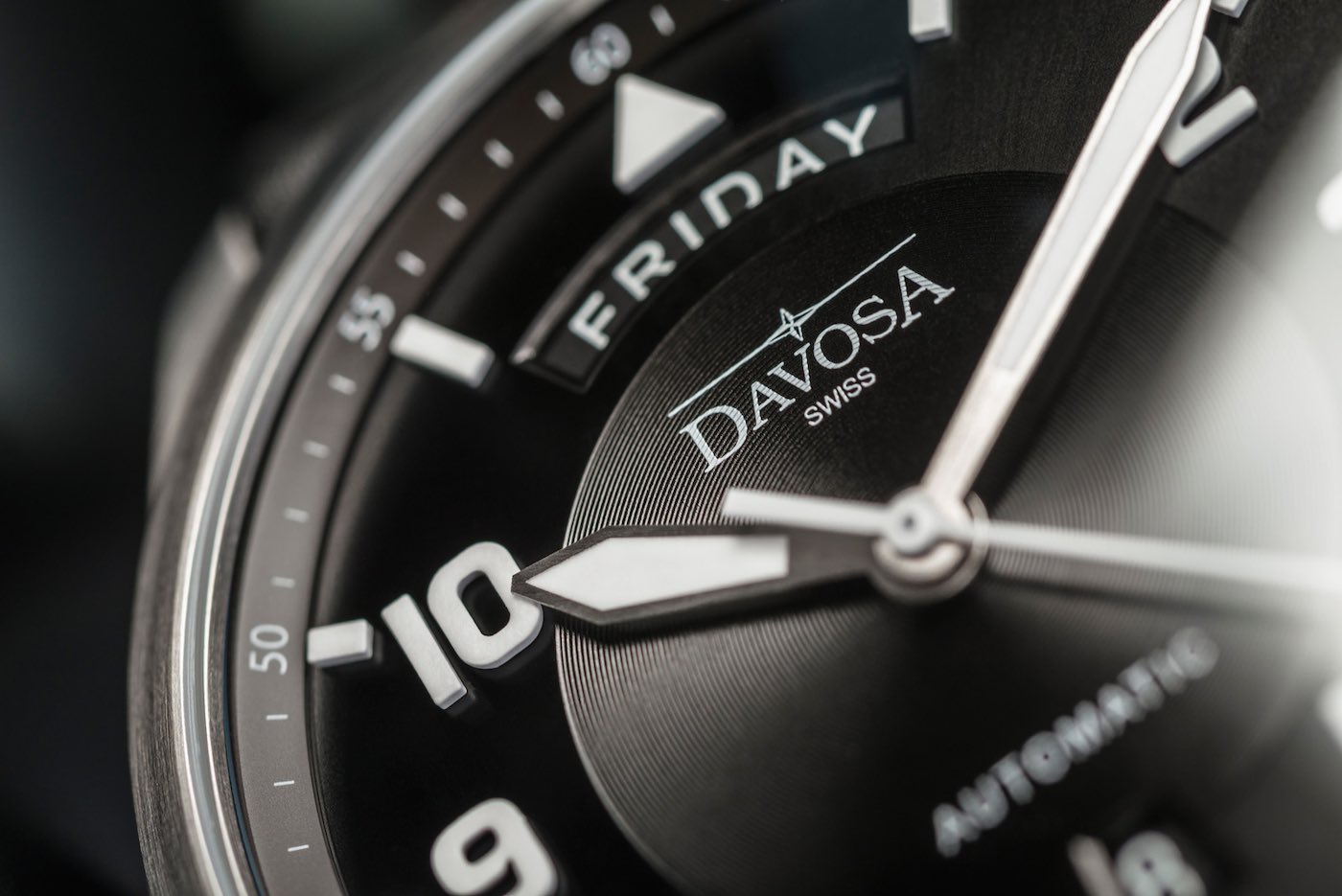 The minute a watch goes down this root of aesthetic embellishment, it ceases being a tool watch and becomes an homage piece, “inspired by” utilitarian ideals. And there is absolutely nothing wrong with that. I’m not a pilot. The majority of our readers are not pilots. Most of Davosa’s customers are not pilots. But a lot of us like planes (and especially pilots), and we don’t mind being made to think of these amazing machines when we check the time. 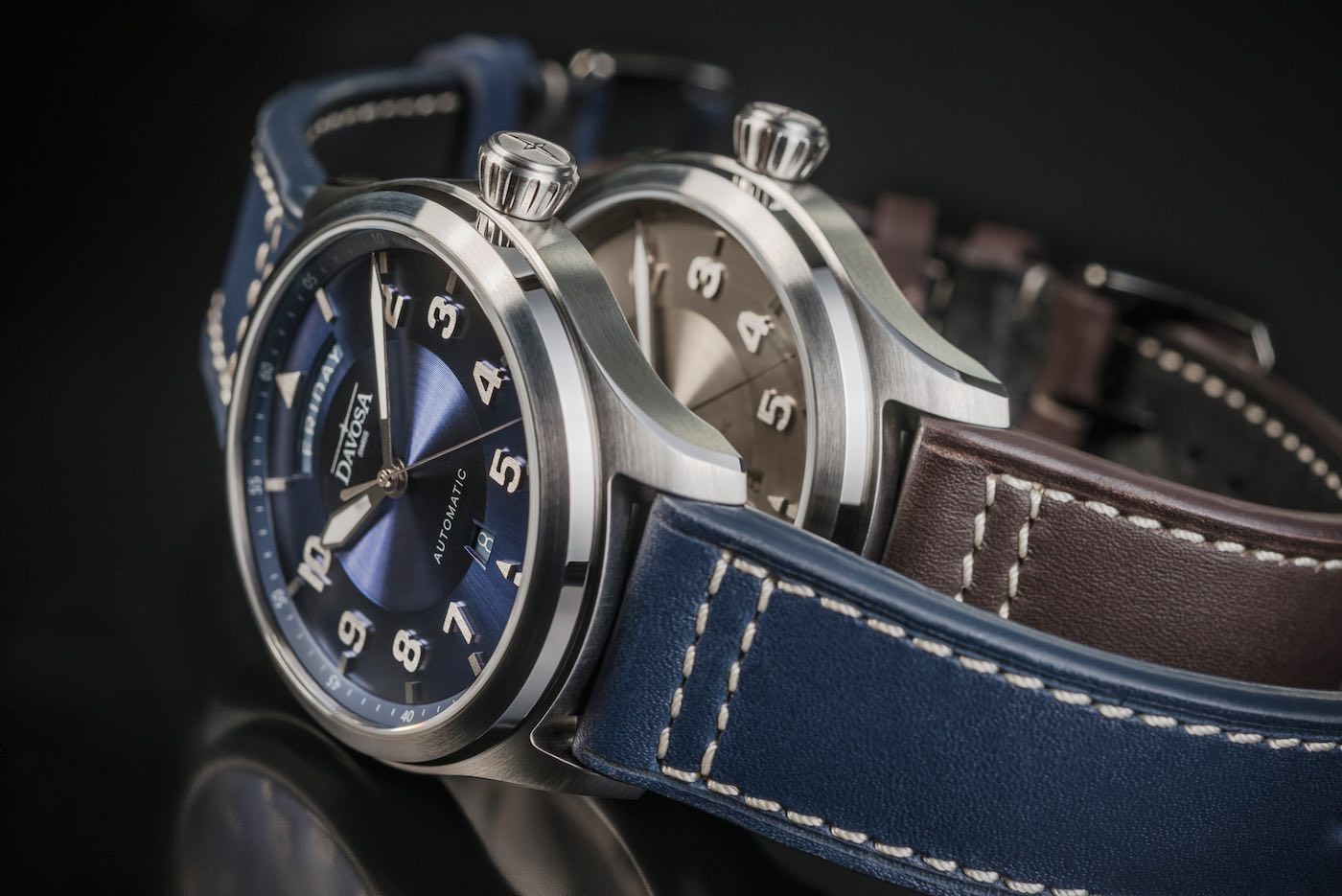 In my opinion, day/date watches live and die on the placement of the day and date readout. I can handle them both being at 3 o’clock on an appropriately large dial. That looks fine to my eyes. I can also get on board with this vertical layout. The nicest thing about having the day at 12 o’clock, I think, is the fact it can be written out in its entirety and doesn’t feel in the least bit cramped for it. And both day and date are color-matched to the dials, which is a very appreciated investment on Davosa’s part. So the placement works, the dial balance is good, and the finish is arresting (especially in the slightly unusual taupe option). But what about the hands and numbers? 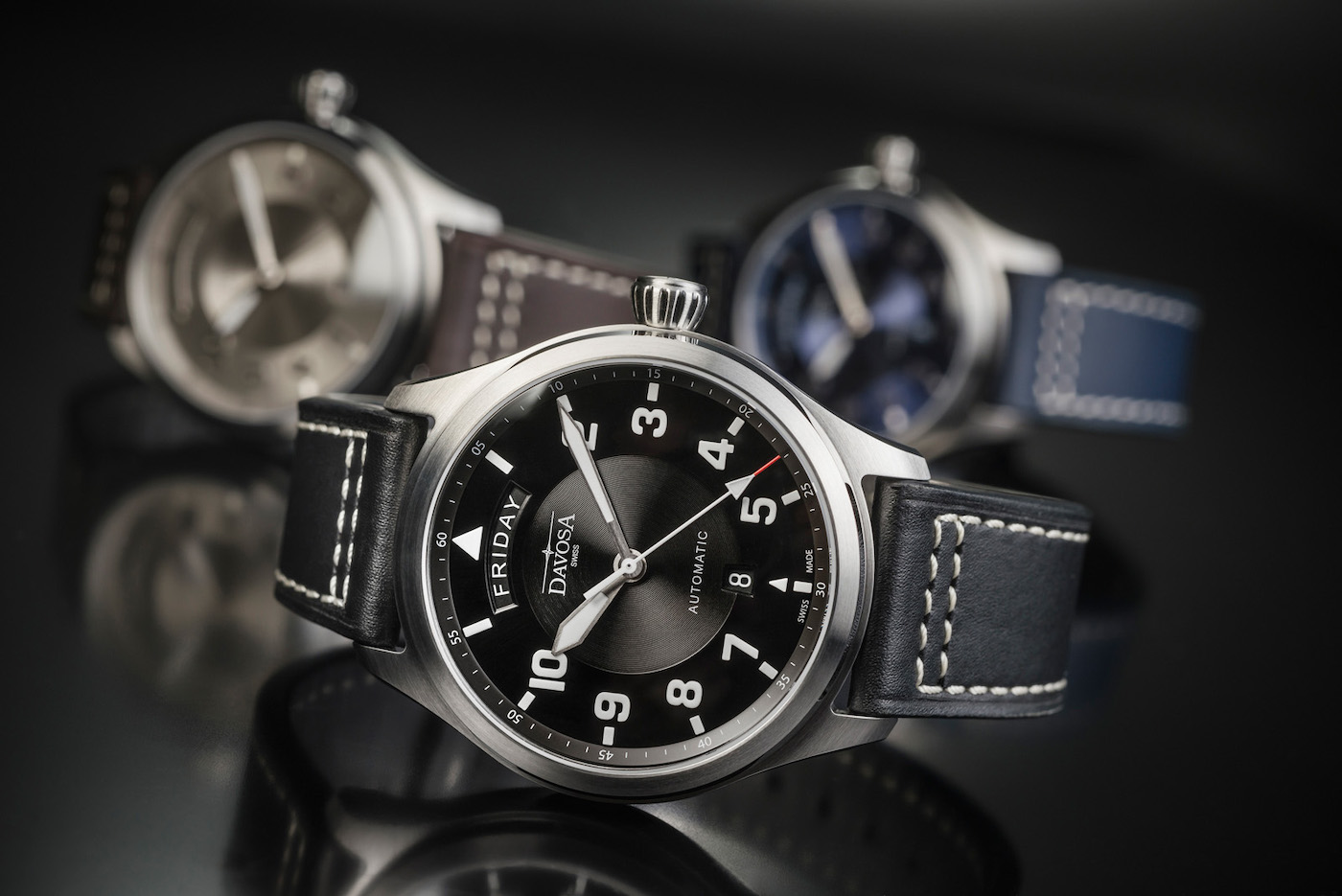 This analysis kind of splits two ways. The numbers are applied, which is good. But they are without lume, which makes me sad. Davosa has continued down the homage route by finishing these silver numbers with a vertical brushing to match the hands. While this looks a bit rough on the macro shots, in real life this is not an unattractive finish at all, and actually aids legibility against a light-catching dial (polished hands would be easier to lose). 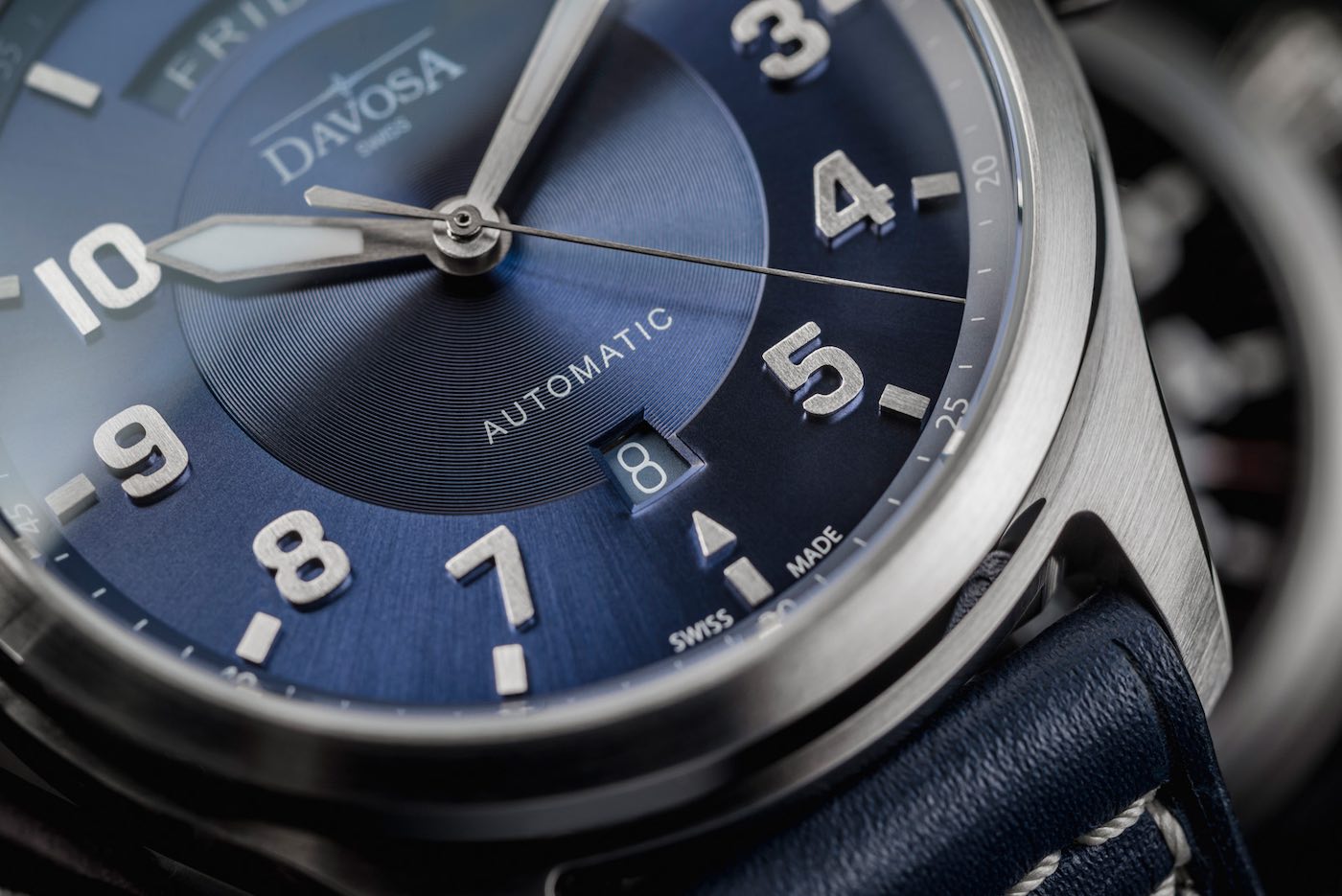 The 44mm stainless steel case (11mm-thick) is water resistant to 50 meters. It is a solid entry that certainly plays second fiddle to the more elegant display. The color-coded straps on each model are a nice touch that reinforces the idea that this is more a watch for the officers’ mess hall than it is the trenches. The Davosa Newton Pilot Day-Date Automatic Watch is powered by the modified automatic DAV 3023, which is visible through a transparent caseback window. Available from all stockists now, the price for these new models is a sensible $898. Learn more at davosa-usa.com.