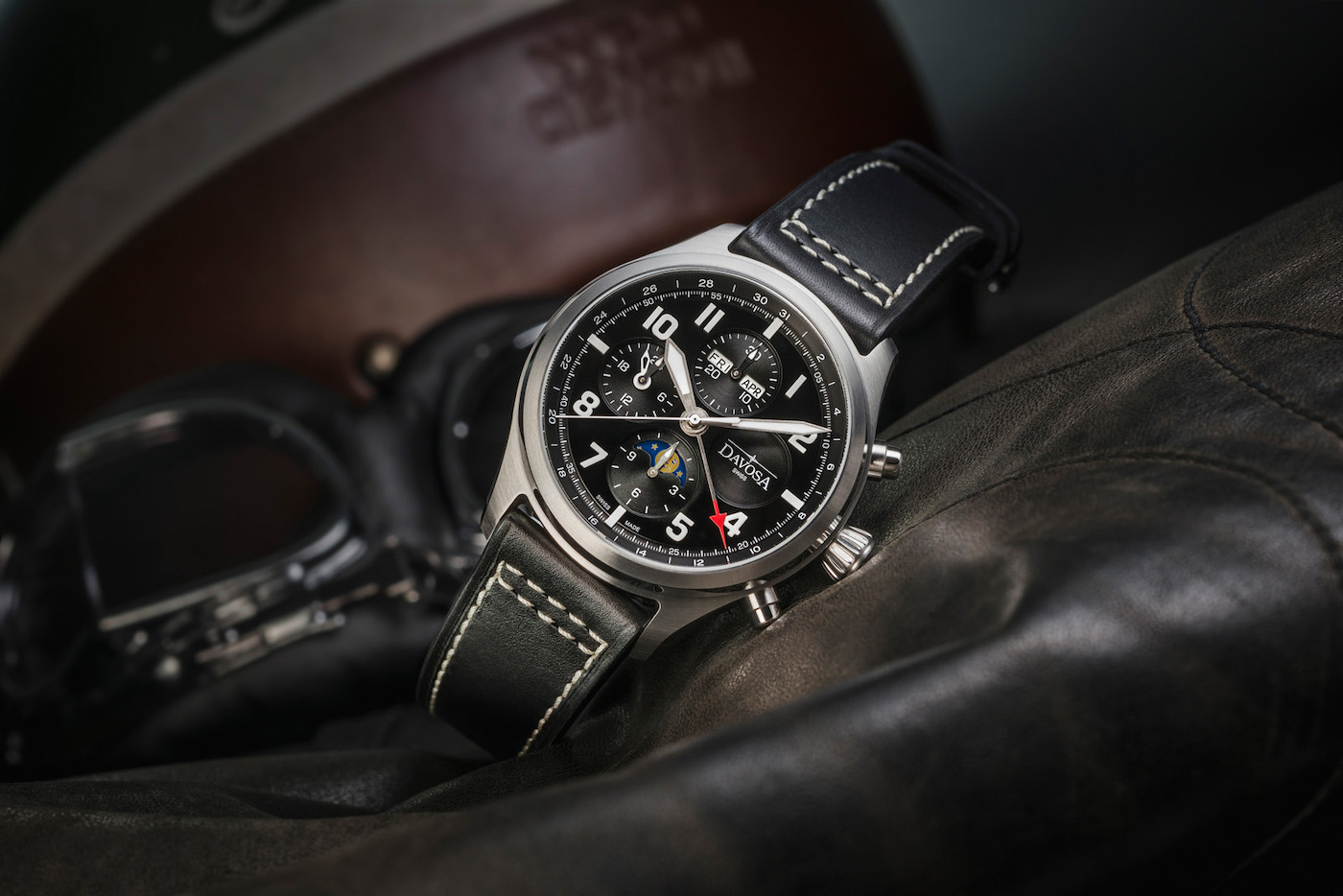 You may not have heard of Davosa, but this small, independent Swiss label is a bit of a hidden gem. The company began life under the name of Hasler, before rebranding itself in 1987 following the positive reception of a line of watches released under the Davosa mark. Nowadays, the company boasts a sizable portfolio of watches, featuring both modern and retro designs, as well as quartz and mechanical models. The Davosa Newton Pilot Moonphase Chronograph Limited-Edition watch is a 300-piece series powered by one of the most complicated movements ever used by the brand — the DAV 3051 (based on the ETA/Valjoux 7751). 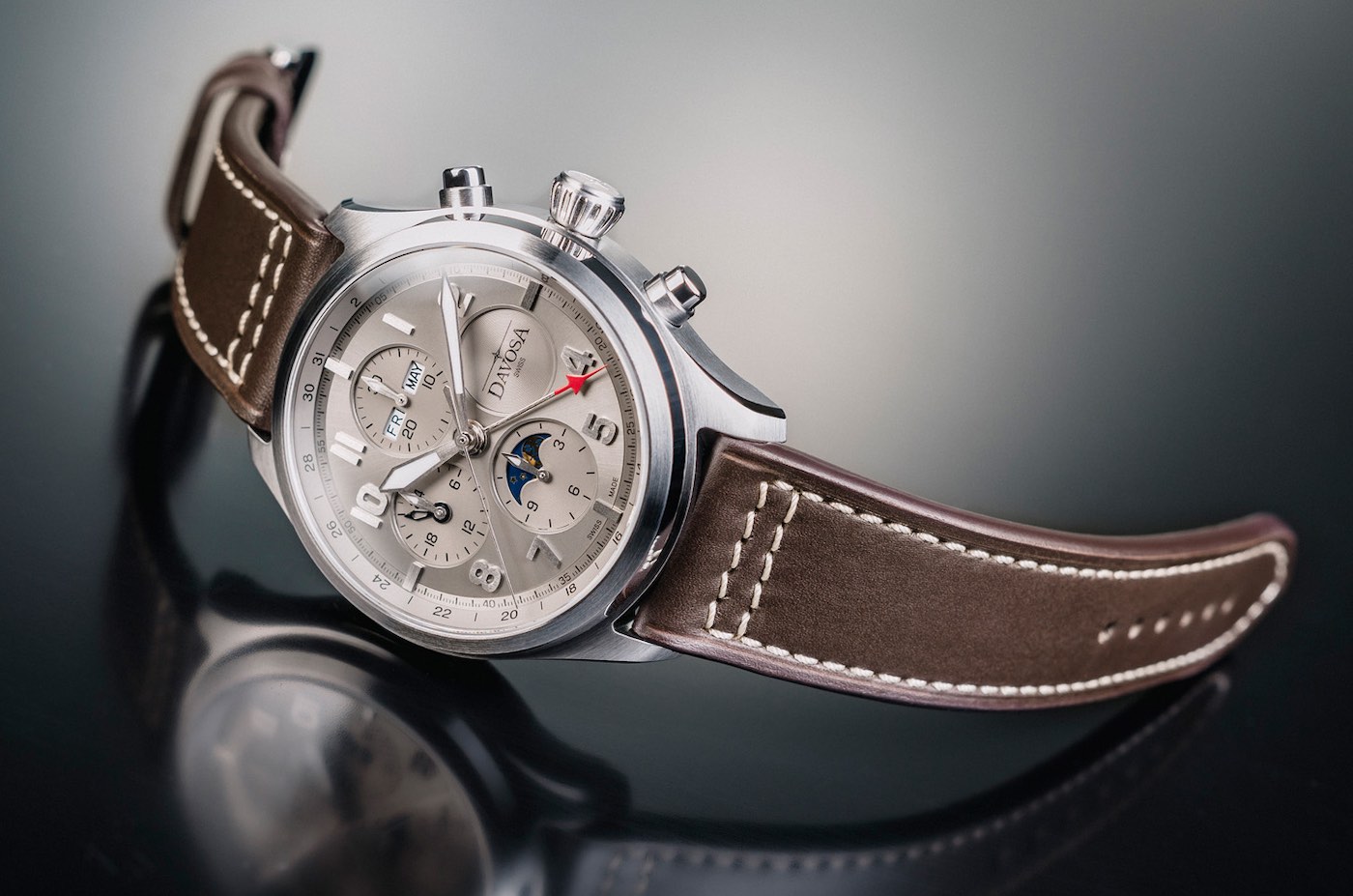 It is interesting for a brand this size to still be producing quartz. In this somewhat tumultuous era of the watchmaking industry, it is imperative to send a clear brand message. Many major brands (like Omega and Rolex, for example) took pains to phase quartz out of their lineups. As a result, many smaller brands followed suit, with startups rarely offering a battery-powered option if they planned on pitching their wares as “luxury” products. This slight anomaly seems to have come about due to Davosa’s quiet but continued existence on the fringes of the mainstream watch world. Having adopted quartz technology in the 1970s, there seems to have remained a market for their more affordable products that perhaps don’t get the press some of the designs deserve. 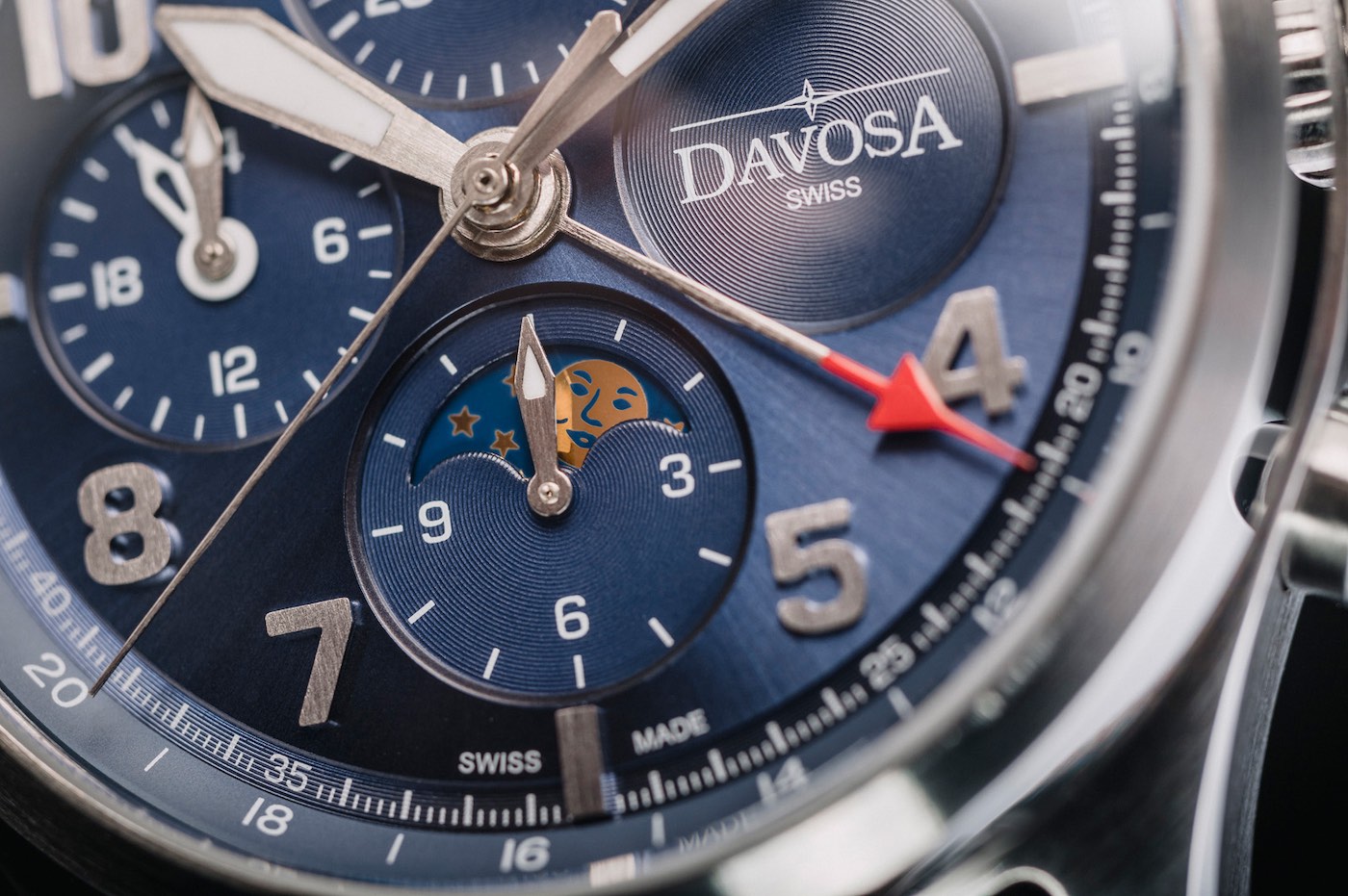 I say “some” because it is a bit of a mixed bag. The collection is quite large for a small indie brand, and so there are a lot of different styles vying for attention. The most successfully executed, in my opinion, are the mechanical Argonautic Bronze Limited Edition, and this model, the Davosa Newton Pilot Moonphase Chronograph Limited-Edition watch. 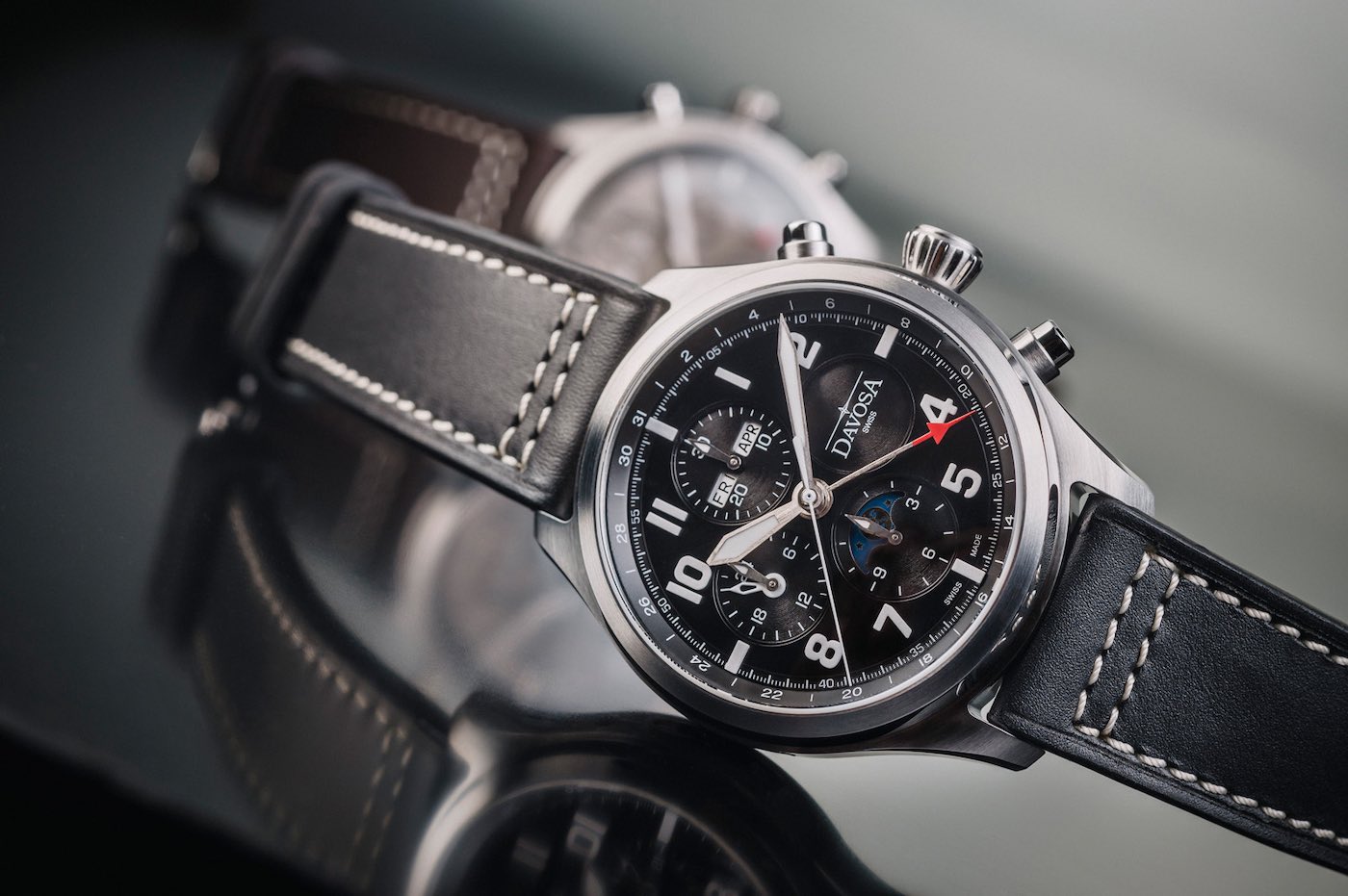 The model is named after Isaac Newton (1643-1727) as a nod to the role Newton played in the study of precise time measurement (which was more inspirational and foundational than it was practical). To mark its limitation, the model has a plaque fitted to the lefthand side of the case. 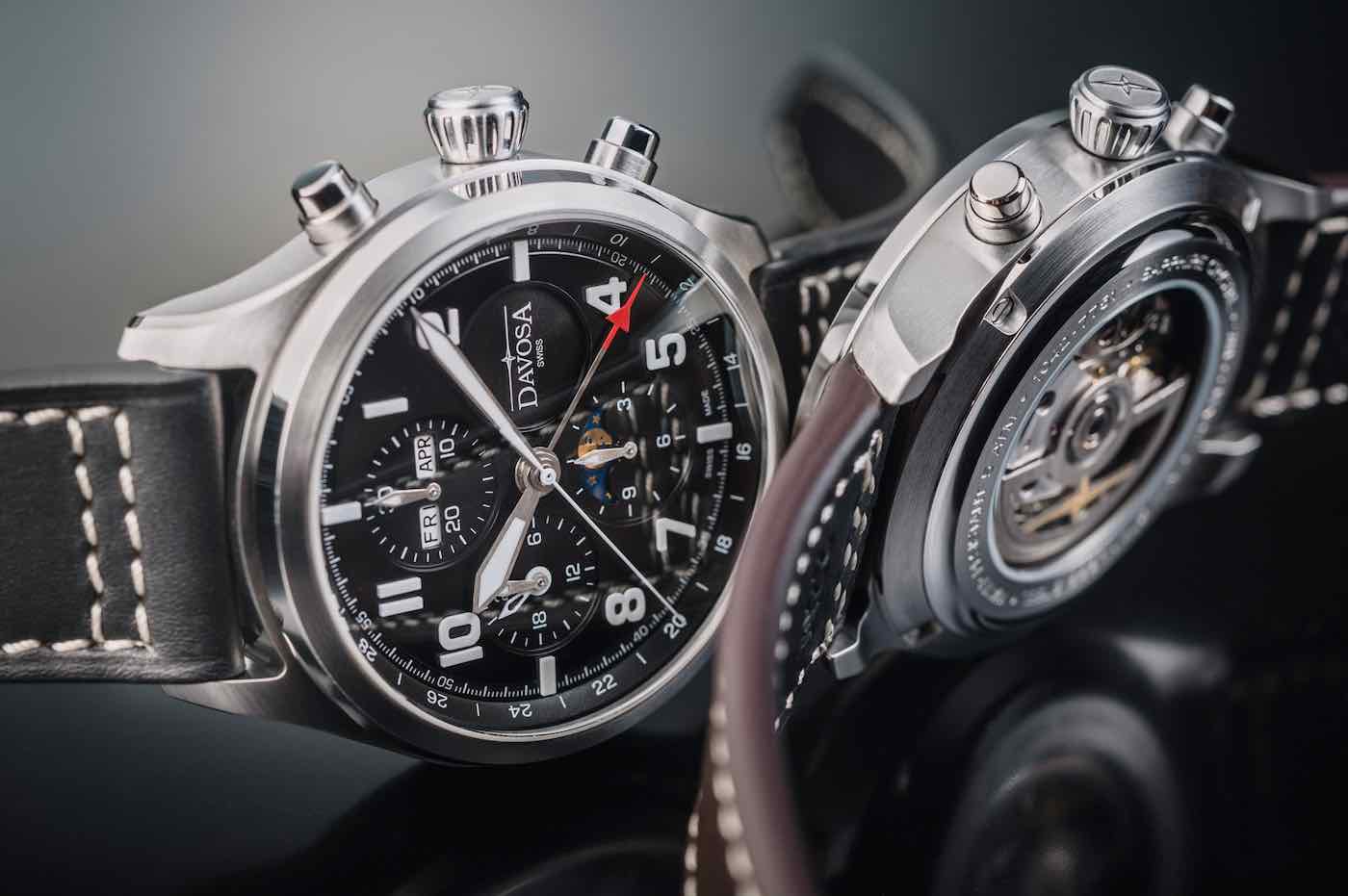 Inside the Davosa Newton Pilot Moonphase Chronograph Limited-Edition watch is the automatic caliber DAV3051. This modified ETA 7751 displays the hours, minutes, and seconds, the phase of the moon, a peripheral date, the day and month (nestled in the sub-dial at 12 o’clock), as well as a 24-hour indicator (the 9 o’clock subdial), not to mention the chronograph function, which is able to record up to 12 hours of elapsed time on command. This model also sees the movement treated to a luxurious finish with pearlized and côte circulaire bridges, heat-blued screws, rhodium plating, and a skeletonized DAVOSA rotor with Geneva stripes. 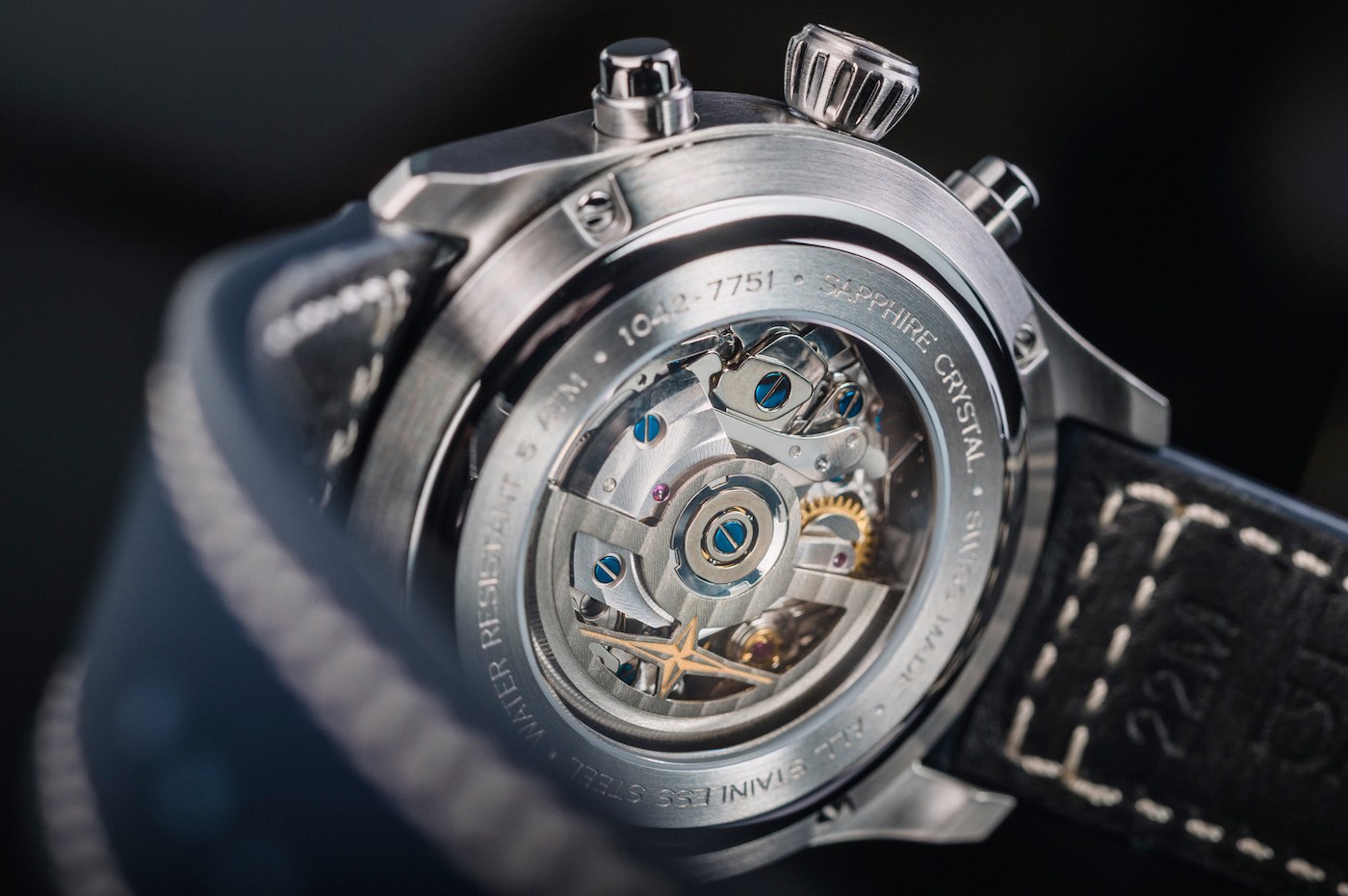 Despite all these functions, the Davosa Newton Pilot Moonphase Chronograph Limited-Edition watch remains legible. The dial (available in three colors) is appointed with high-contrast white indicators treated with BGW09 luminescent material to ensure legibility in low light conditions. All of this is wrapped up in a surprisingly wearable 44mm stainless steel case that stands up 14mm on the wrist. And the price? A very reasonable $2,398. Learn more about the history of the brand and explore its impressive range at davosa-usa.com.