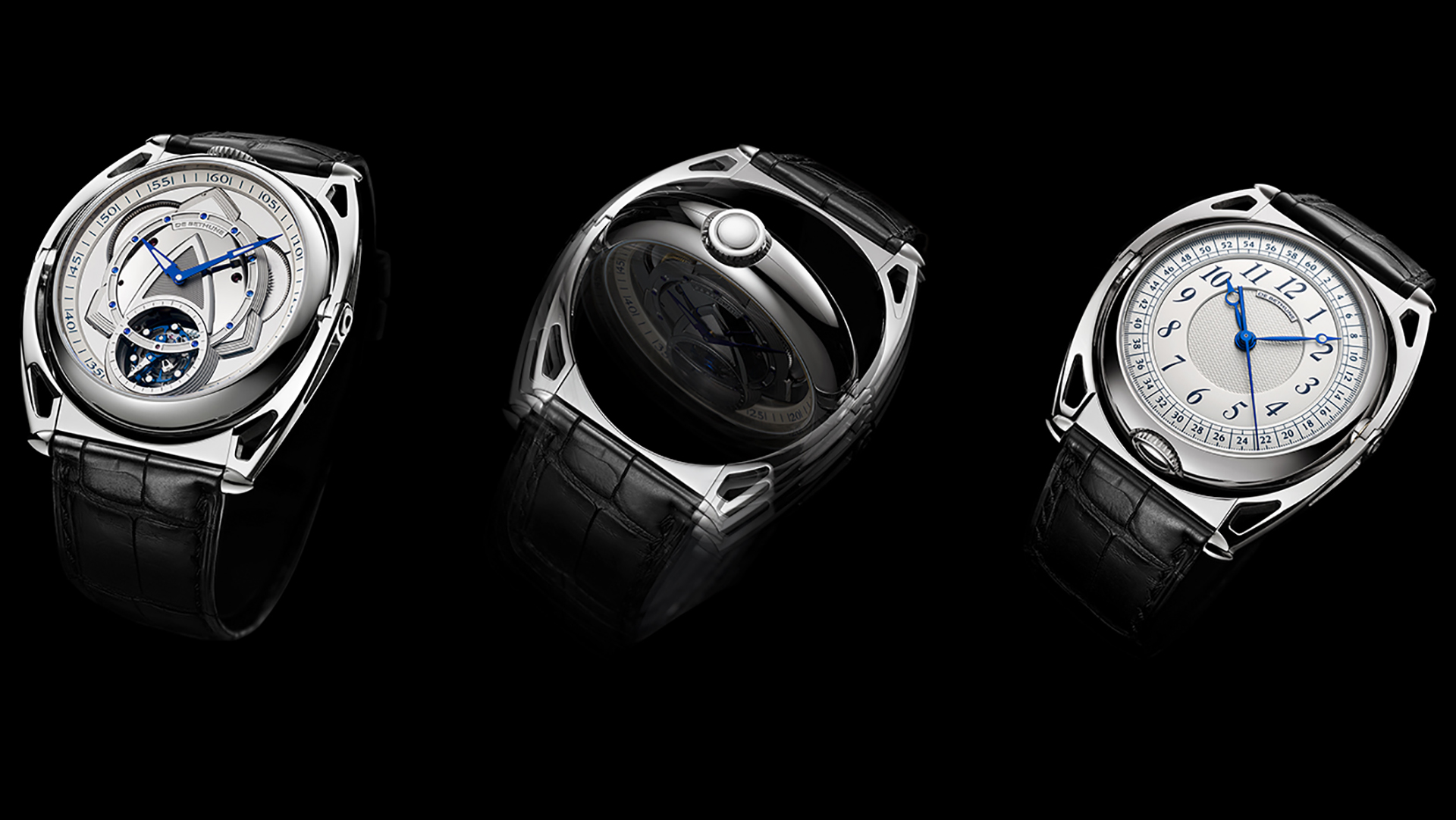 Haute horlogerie brand De Bethune has built its reputation on two very different personalities. Half of its offerings are modern interpretations of traditional designs, with hallmarks like slim Roman numerals and Breguet hands rendered in exacting quality. The other half are wild, futuristic visions, with a recurring “Star Trek” inspired delta bridge motif and a penchant for avant-garde floating case concepts. While both sides of the brand have their own followings, rarely if ever do the two personalities meet. De Bethune’s first major release of 2021 looks to change that, with a theatrical two dial rotating case design that allows wearers to choose between aesthetics on a whim. The new De Bethune DB Kind of Two Tourbillon combines both halves of the brand’s dual personality into one dramatic design, while also including a series of unique complications. 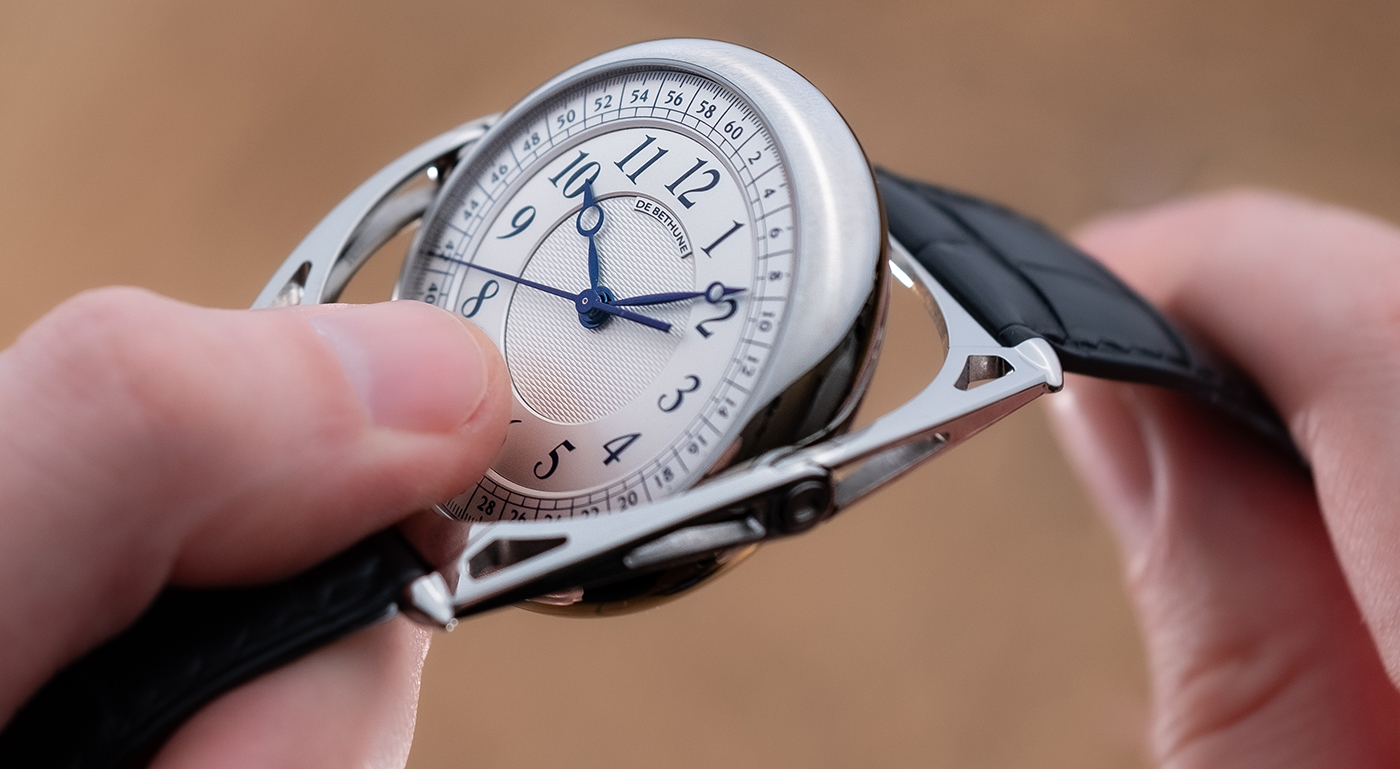 The 42.8mm Grade 5 titanium case of the De Bethune DB Kind of Two Tourbillon follows the brand’s floating case design philosophy with a few added tricks. The outer frame with its flowing C-case profile and instantly recognizable skeleton lugs is present here, but a crosspiece running in between the lugs is added for greater stability. The need for rigidity is obvious when viewing the watch’s main selling point – its pivoting central case. This rounded, polished pocket watch-like inner case rotates completely along the 3 o’clock axis to reveal the twin dial designs. In order to ensure a crisp and accurate turn, the case features a complex 28 piece rotating mechanism along with a cam and notch system that clicks the inner case in line with the outer frame when the rotation is done. This rotating case gimmick feels like a natural extension of De Bethune’s signature floating lug design, integrating smoothly into the overall design while compromising none of the brand’s distinctive character. 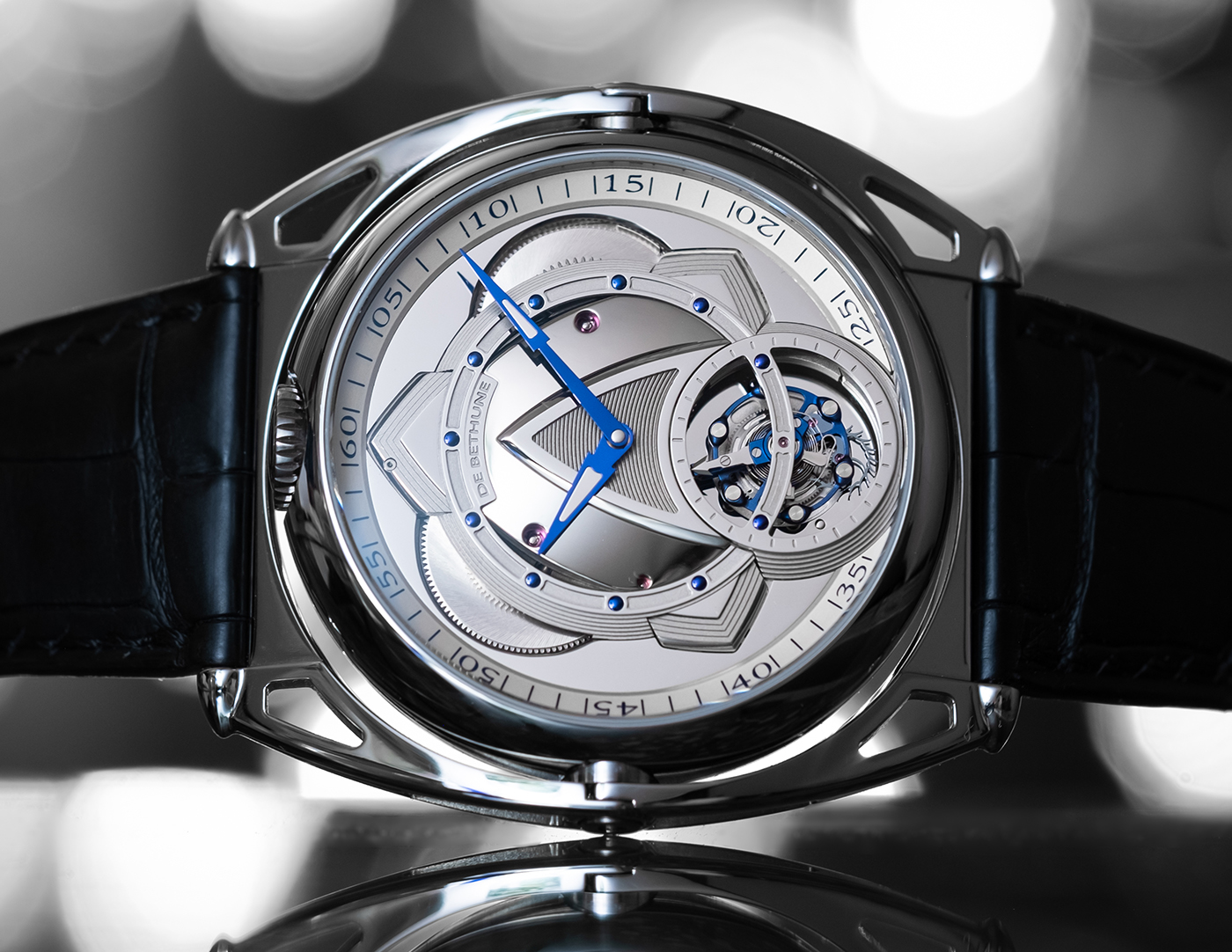 Representing the futuristic side of the brand, the first dial of the De Bethune DB Kind of Two Tourbillon offers a geometric, semi-skeleton contemporary take on dress watch themes.  The silvered main dial is cut through by a stepped polished titanium hours ring, featuring dramatic triangular flares at 4, 8, and 12 o’clock. This stepped effect recurs throughout the dial design, and together with the skeleton cutouts and chiseled sections of the hour ring look in images to give a relatively thin watch (only 9.5mm at its thickest point) miles of visual depth. The applied hour markers inside this terraced ring are simple heat blued titanium nubs, which together with the exaggerated blued arrow hands and blued titanium tourbillon add a punch of traditional color to the sterile silver backdrop. The brand’s trademark “Starfleet insignia” bridge shines through a cutout in the center of the dial, mirror polished and with a ribbed central section that nicely echoes the stepped segments throughout the dial. Of course, the tourbillon at 6 o’clock forms a natural focal point, with a 60 second rotation that acts as a running small seconds display. 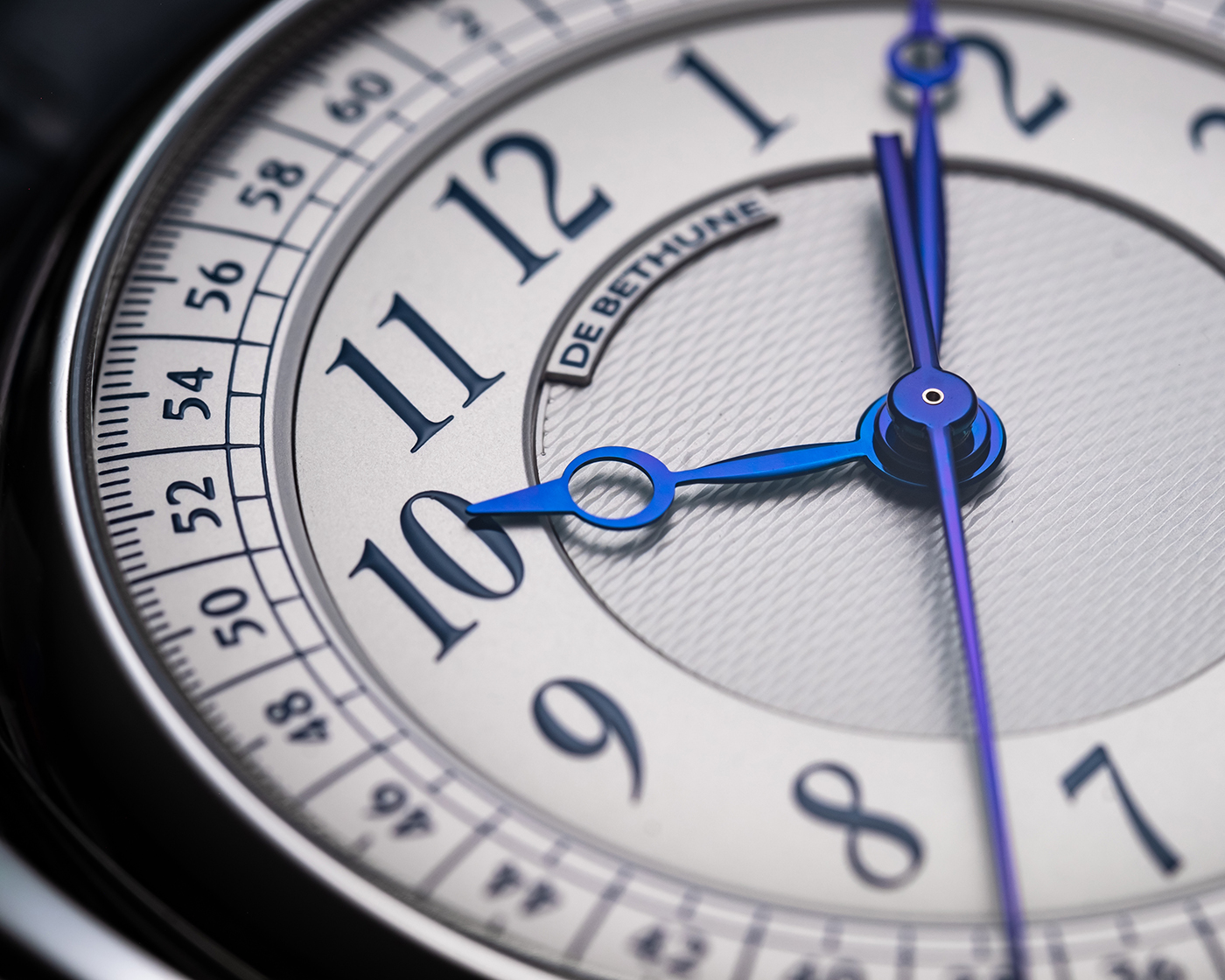 Perhaps the most impressive feature of the more traditional second dial is something many observers won’t notice at first glance. On its own, this is a simple, classically proportioned dress design with a silvered hand guilloché central dial section, swoopy printed blue Arabic numerals, and heat blued titanium Breguet hands. The central seconds hand blends in so naturally in this context, it belies its own difficulty. Moving from a 6 o’clock small seconds tourbillon on one side of the case to a central seconds hand on the other is no mean watchmaking feat, especially with a thin movement, and the execution of this mechanical challenge calls almost no attention to itself. The other distinctive feature of this second dial is the wide outer chapter ring, hosting a surprisingly complex dual scale for minutes and seconds. This element may prove contentious, with a mix of a railroad scale, 1/5 second hash marks, and printed numerals. This combination seems in images to both compress the rest of the dial visually and disrupt the otherwise clean and classical feel. 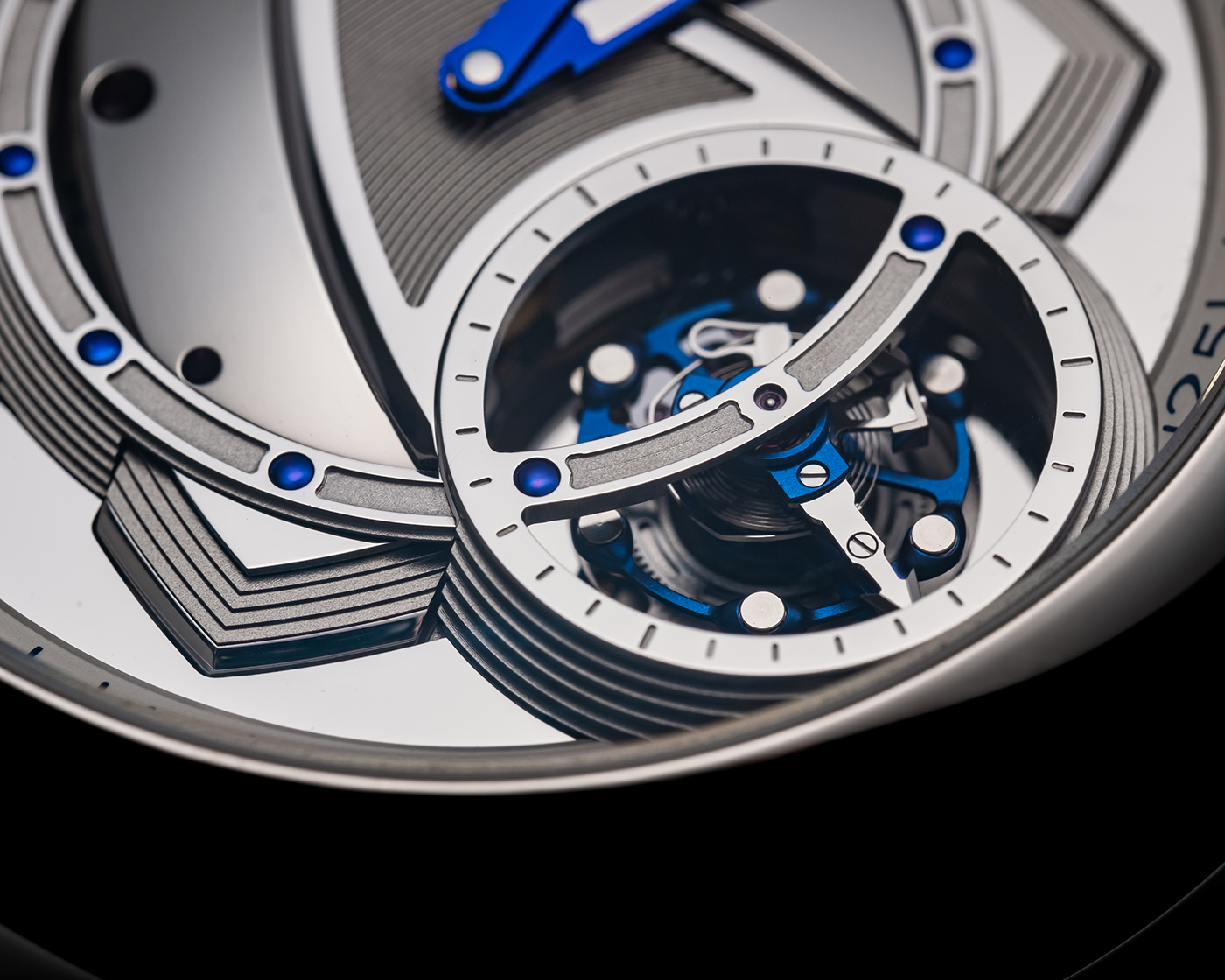 The beating heart of the De Bethune DB Kind of Two Tourbillon is the manufacture DB2579 handwound tourbillon movement. This unique two-dial movement uses an ultralight titanium tourbillon, along with a silicon escape wheel, and a patented De Bethune type balance spring with a flat terminal curve. Power reserve is a hefty 120 hours thanks to a self regulating twin set of mainspring barrels, while the beat rate is a smooth 36,000 bph. 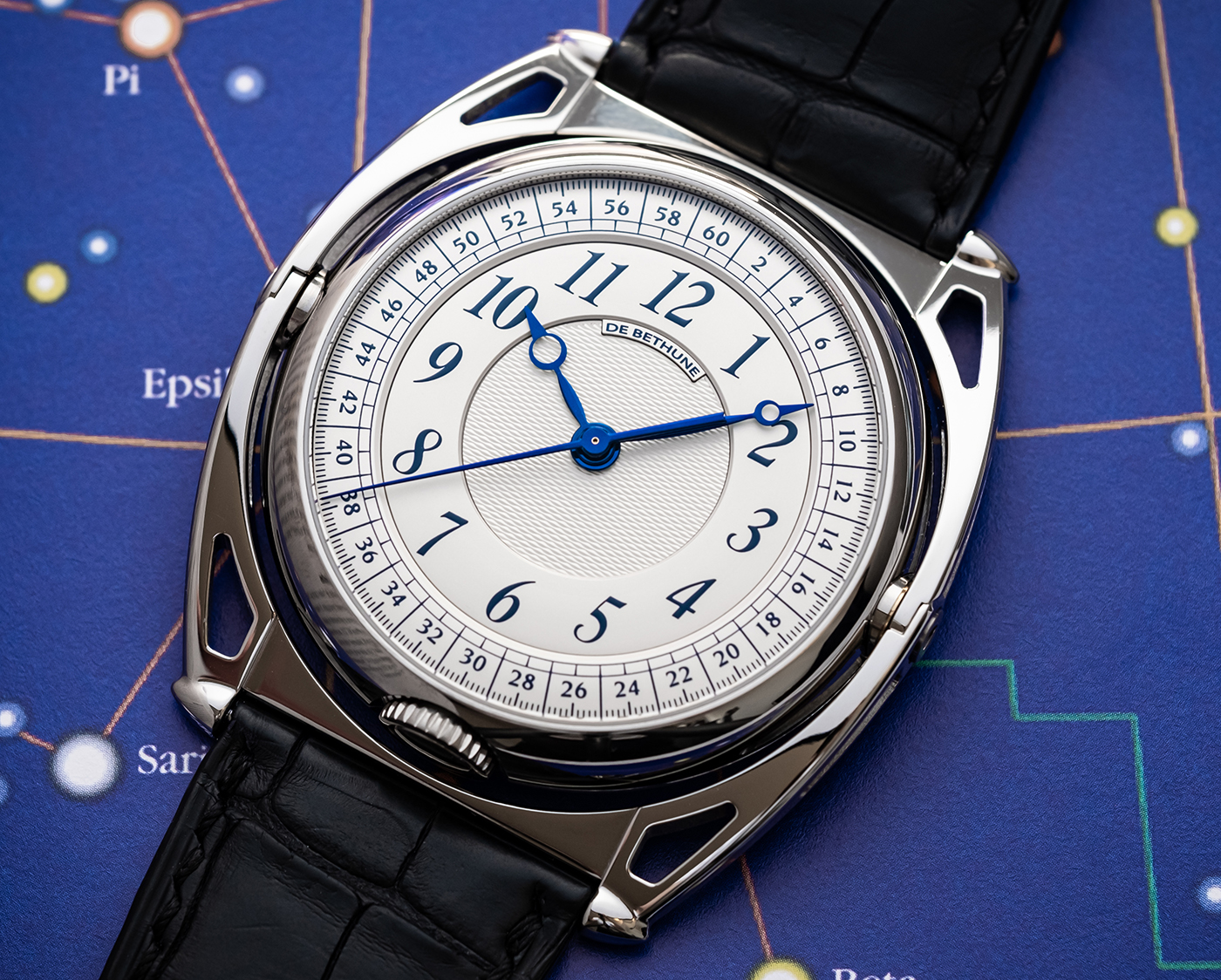 Choosing a strap that fits both the traditional and avant-garde character of the De Bethune DB Kind of Two Tourbillon is a unique challenge. The brand’s solution is a safe and luxurious option, with an alligator leather strap in classic piano black. 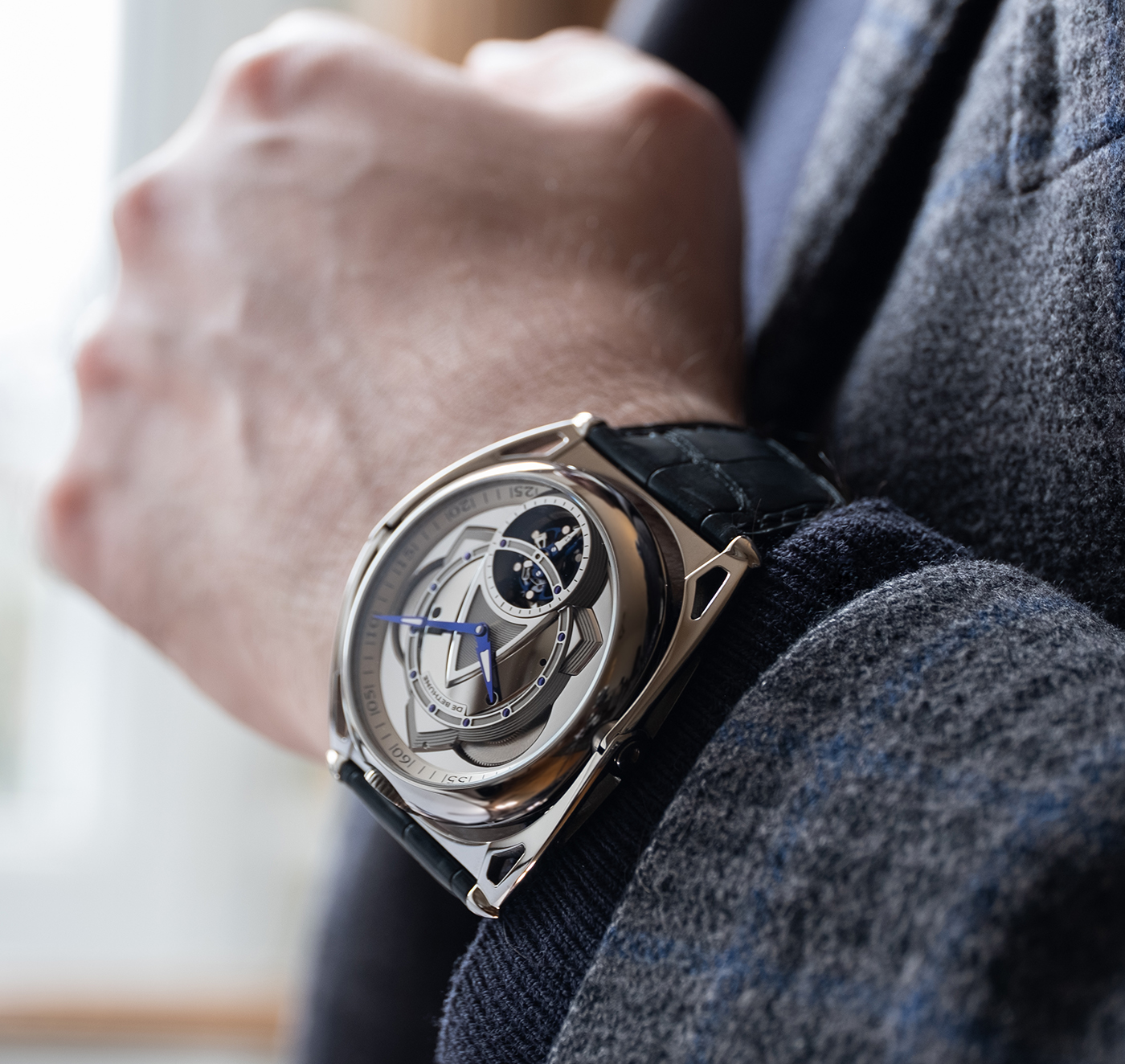