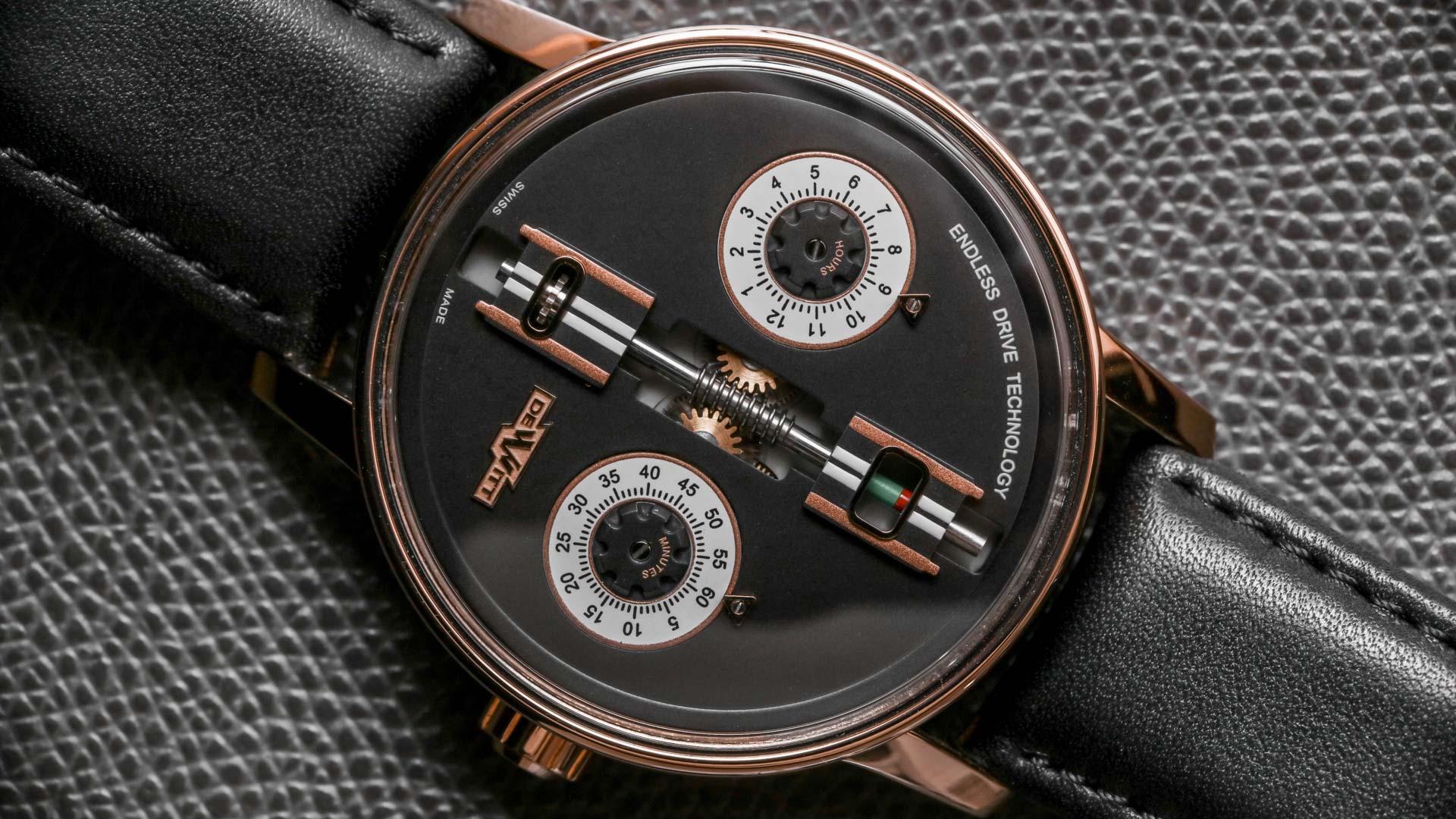 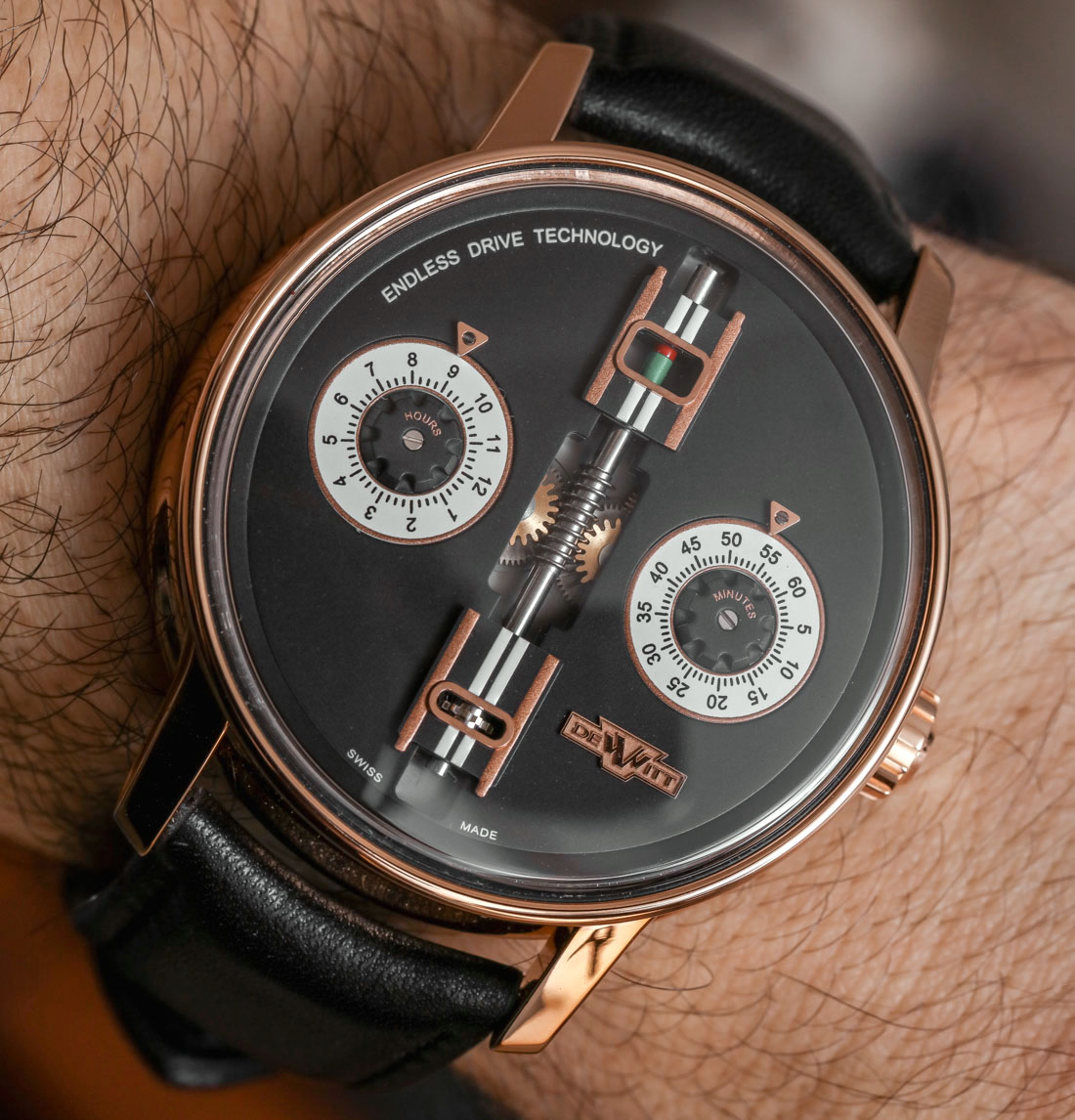 Started by “machine collector” and “Count” Jerome DeWitt (who also has a claim to being an ancestor of Napoleon), Geneva-based DeWitt is among the more interesting independent watch brands that collectors should know about. Brands like DeWitt come with strengths and weaknesses. Independence and resolution are among their strengths, and trying to solo it in a world for luxury mechanical timepieces is clearly a challenge DeWitt and others are trying to overcome in a time when inherent quality and mere perception battle it out for luxury spending dollars. Here I review the latest watch in their “Academia” line (some previous models have been the Out Of Time Watch and the Academia Grand Tourbillon), the DeWitt Academia Endless Drive. 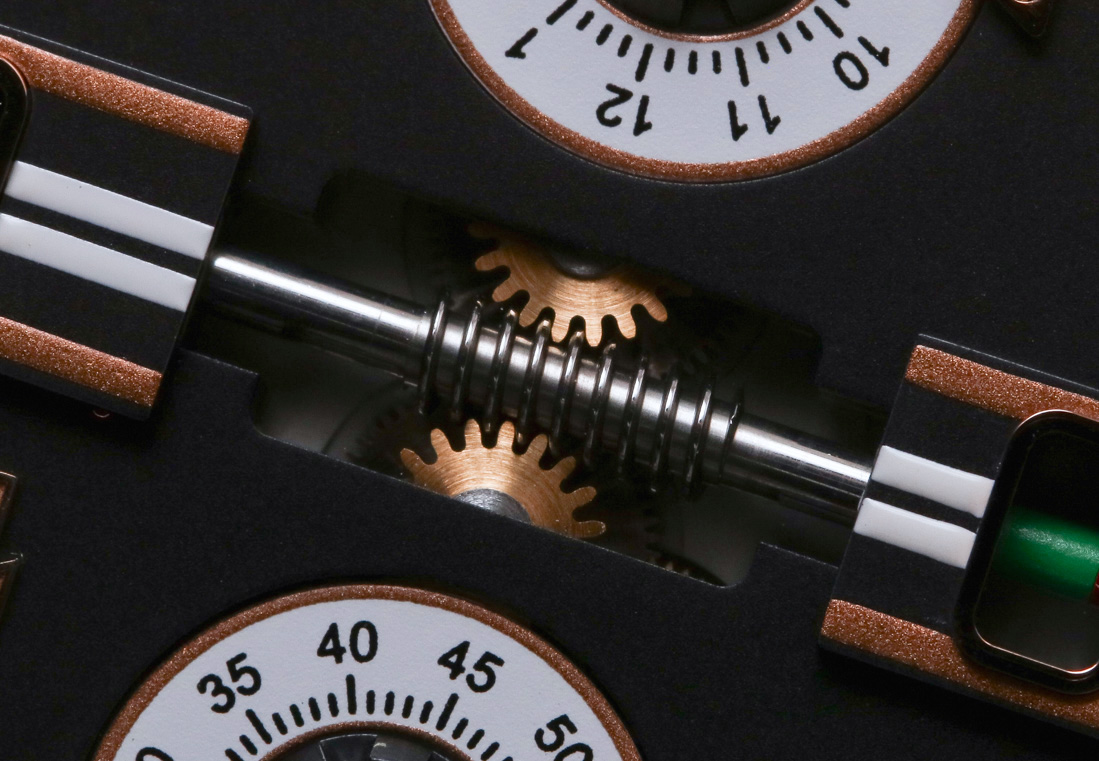 I’ve visited the DeWitt watch manufacture on several occasions and always walk away impressed by the originality and creativity of many of their products. Not everything they make is necessarily pretty or even that practical, but DeWitt bucks the curves in their general Geneva region by actually trying to be novel and different. The new reference AC.ED.001 DeWitt Academia Endless Drive is a funky, but cool watch the likes of which you’d never see being released by one of the “big firms.” It’s interesting, a bit weird, and not particularly inexpensive – but it does have something that a lot of other watches in this price point lack; character. 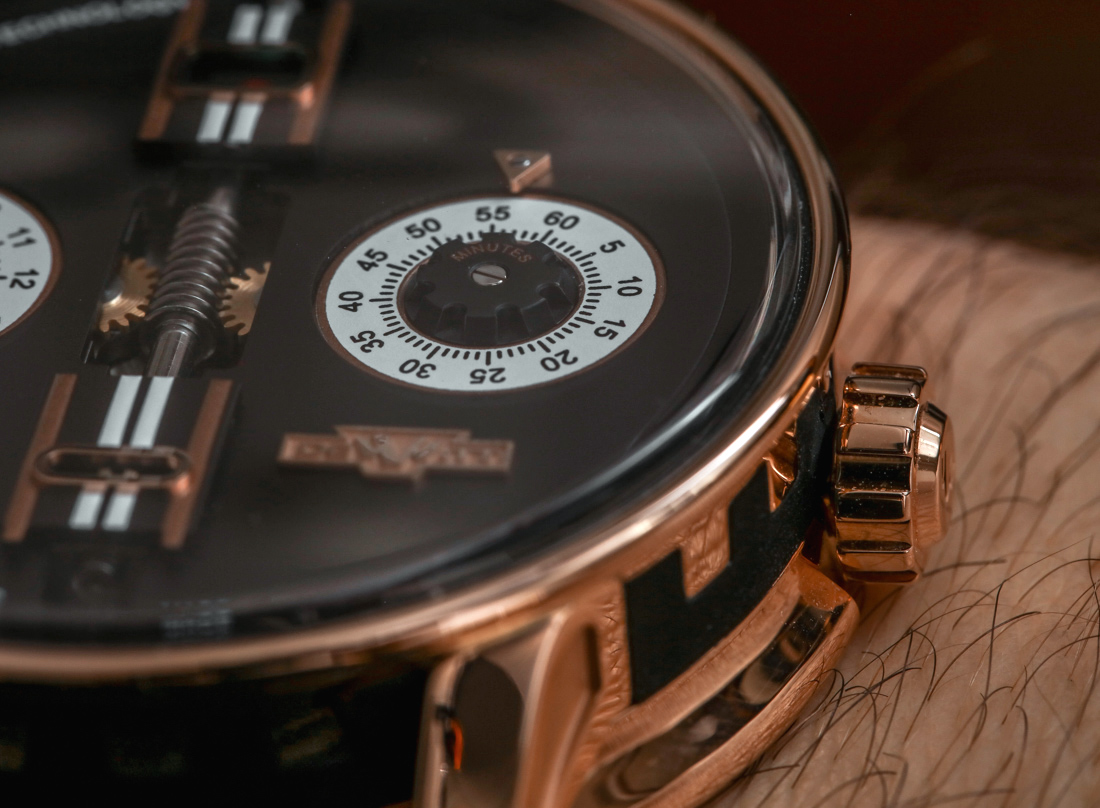 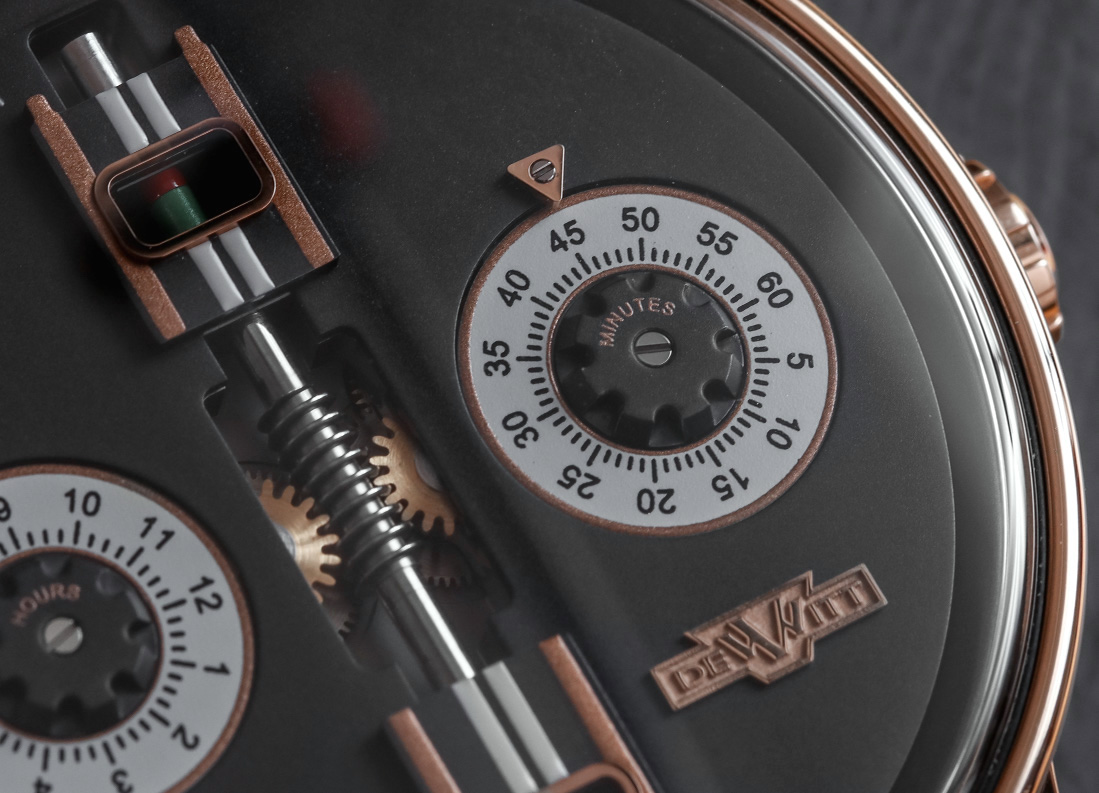 According to DeWitt, after I gave them some feedback during my review they decided to tweak the design of the final product in order to make it a bit more legible. Reading the time is done via two discs which represent the hours or minutes. The first version of the Endless Drive has the numerals and arrows too small to read. I suggested to DeWitt that they design a sapphire crystal with two magnifier crystals on it over each of the time reading discs. Instead, they mildly redesigned the discs so that the numerals themselves were printed larger. A picture of the eventual version of the DeWitt Academia Endless Drive with the larger numerals has been placed in this review – and it is important to realize this change when viewing my own pictures of the product. 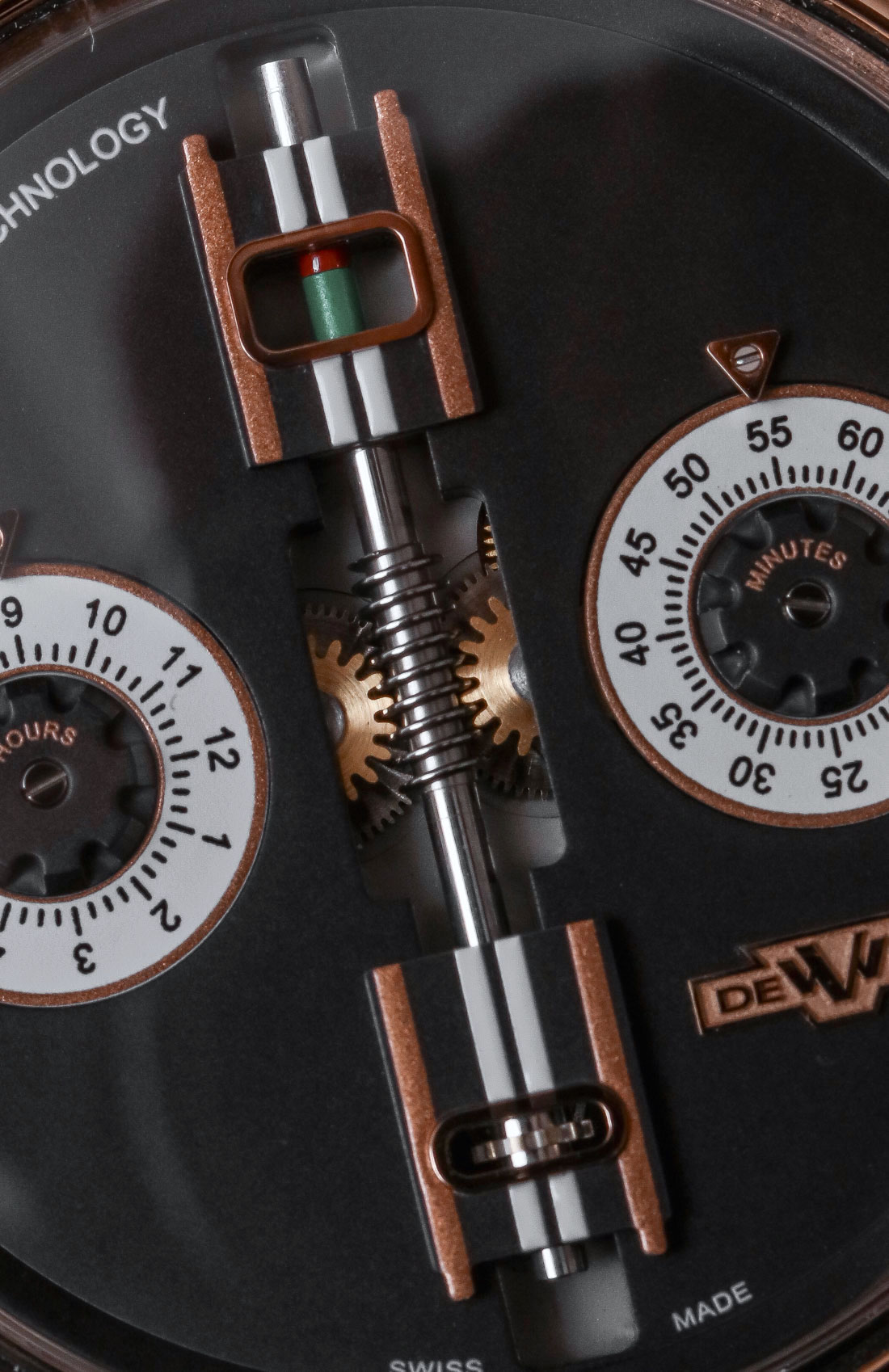 In relatively large text the face of the watch reads “Endless Drive Technology.” What is that all about? Well, it is in the name of this timepiece so clearly it’s important to the value proposition. If you look at the center of the dial, there is a slit in the center cutout with a long metal stem that has gearing in the middle of it. Mechanically speaking this shaft can turn endlessly given that it can both spin and be moved up and down. This shaft is also connected to a color-coded power reserve indicator visible in a small window under the 12 o’clock position on the dial. This section of the “endless drive shaft” goes from green to red in color as the movement’s mainspring power reserve decreases over time. In total the movement has 59 hours of power reserve. 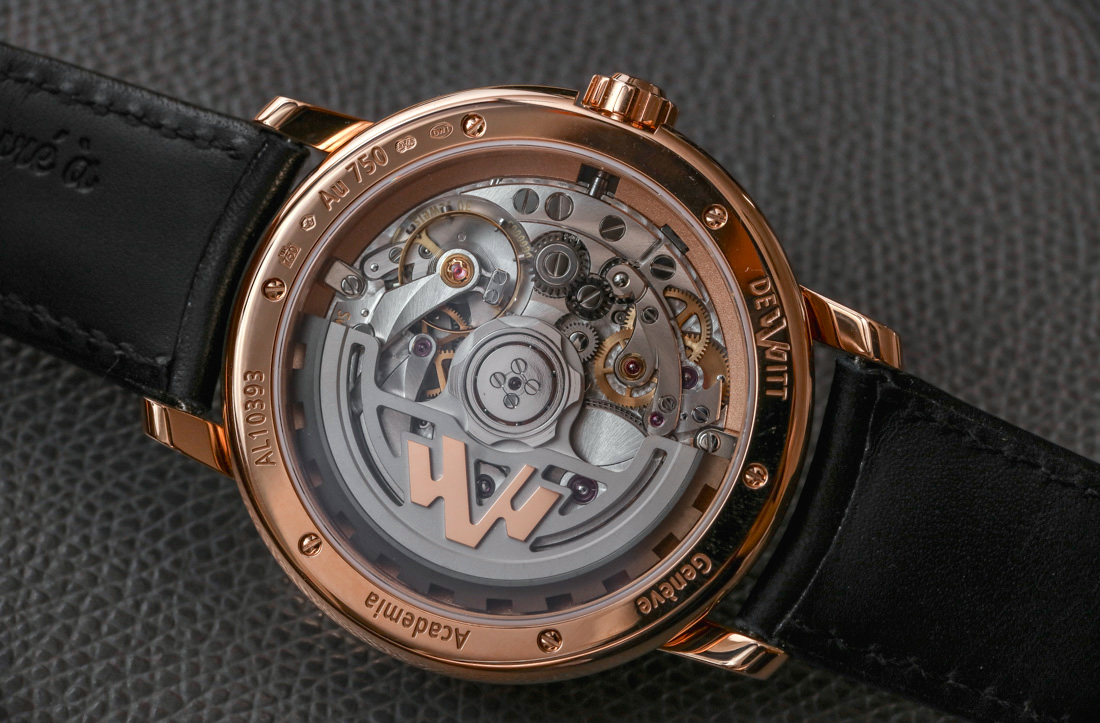 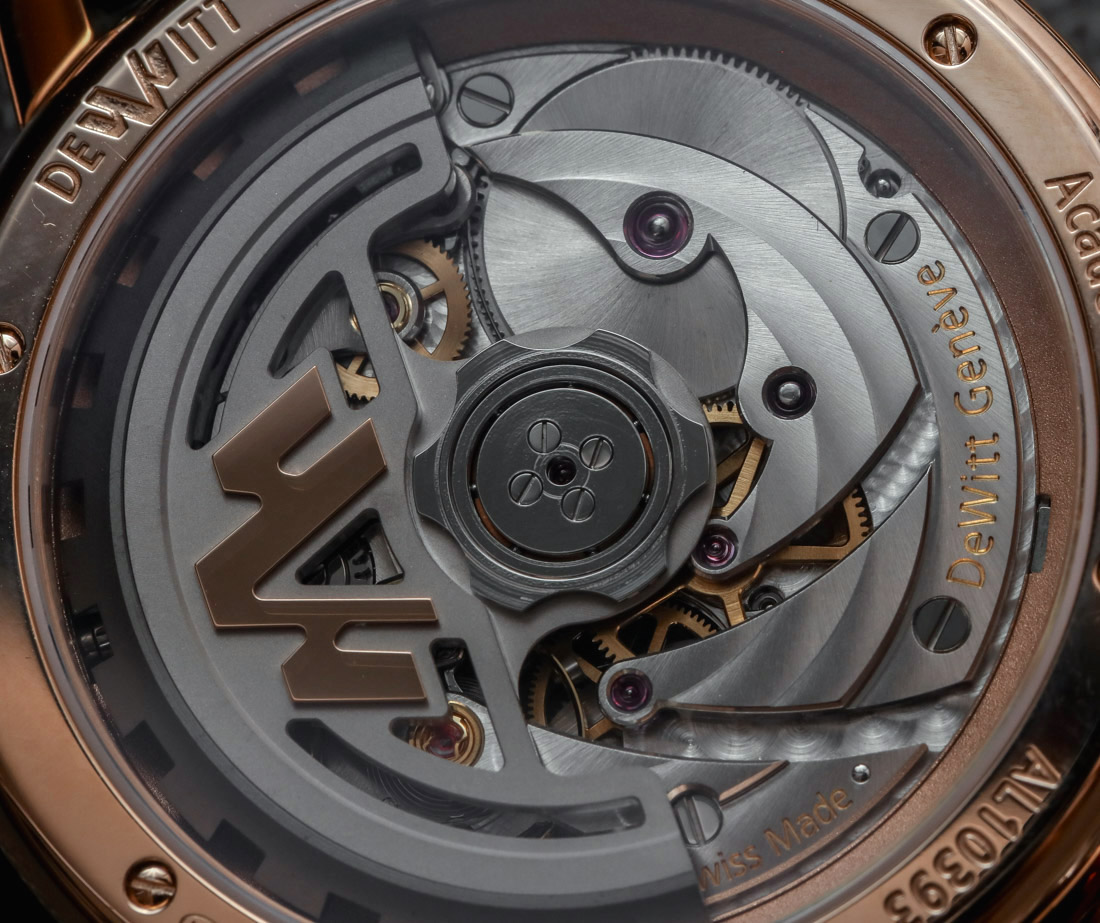 Produced in-house, the movement is known as the DeWitt caliber DW1653. This is the brand’s core automatic movement base with a module over it for the Endless Drive complication and the dial layout design. The movement is produced from 320 pieces operating at 3Hz (21,600 bph) and is rather nicely decorated. You can view the rest of the movement through the sapphire crystal display window on the rear of the case. 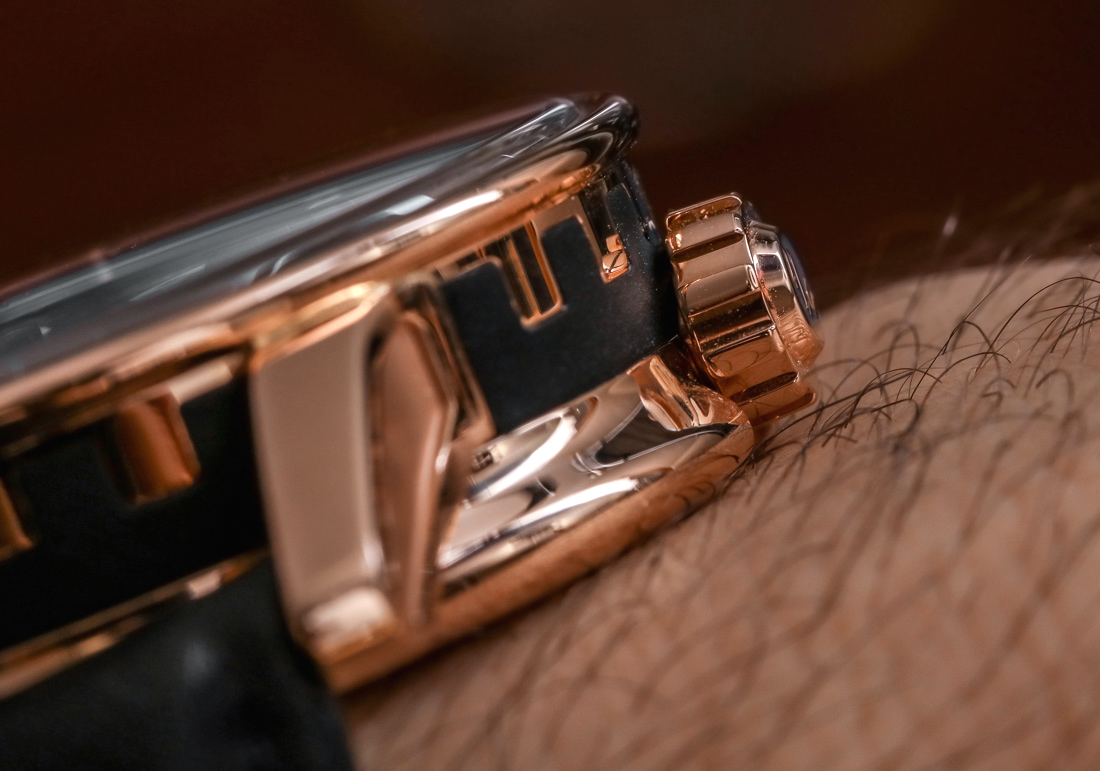 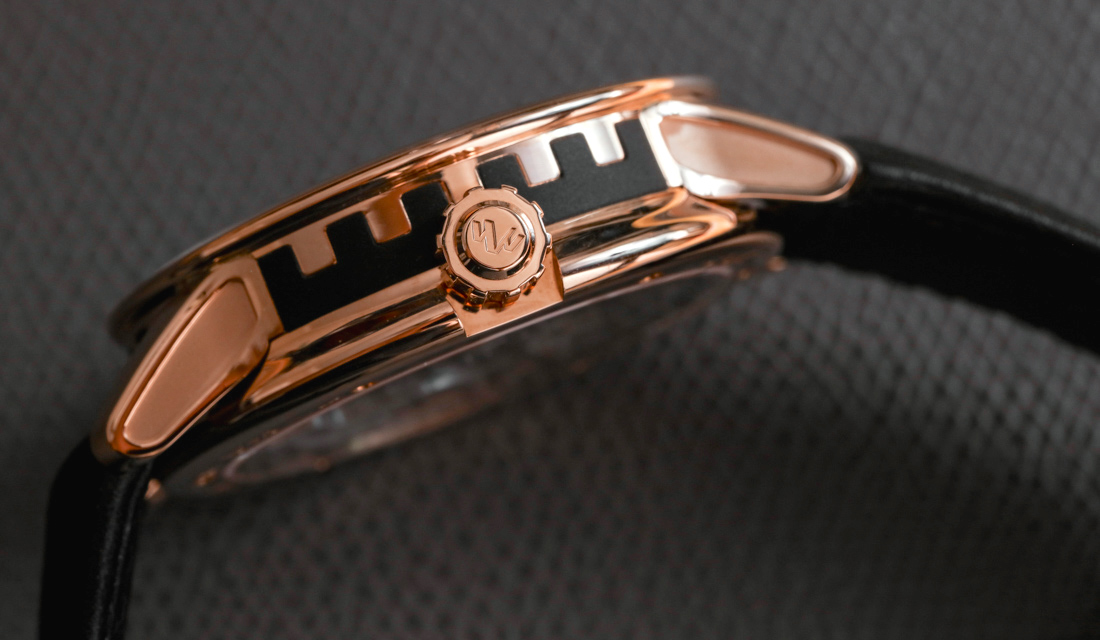 Produced in 18k rose gold, the Academia-style case is slightly wider at its base than the top and is 42.5mm wide and 12.85mm thick (water-resistant to 30m). It does wear a bit on the larger size and the strap width where it connects at the lugs is 21mm wide. Attached to the case is a black calfskin leather strap. Strap quality is fine, but I was both underwhelmed by the simple look of the strap and also personally unable to properly wear the watch because the strap was too long. Just another reminder that if you have narrower wrists like me, it is important to check the strap length before getting anything, as brands typically have shorter straps available only if you ask. 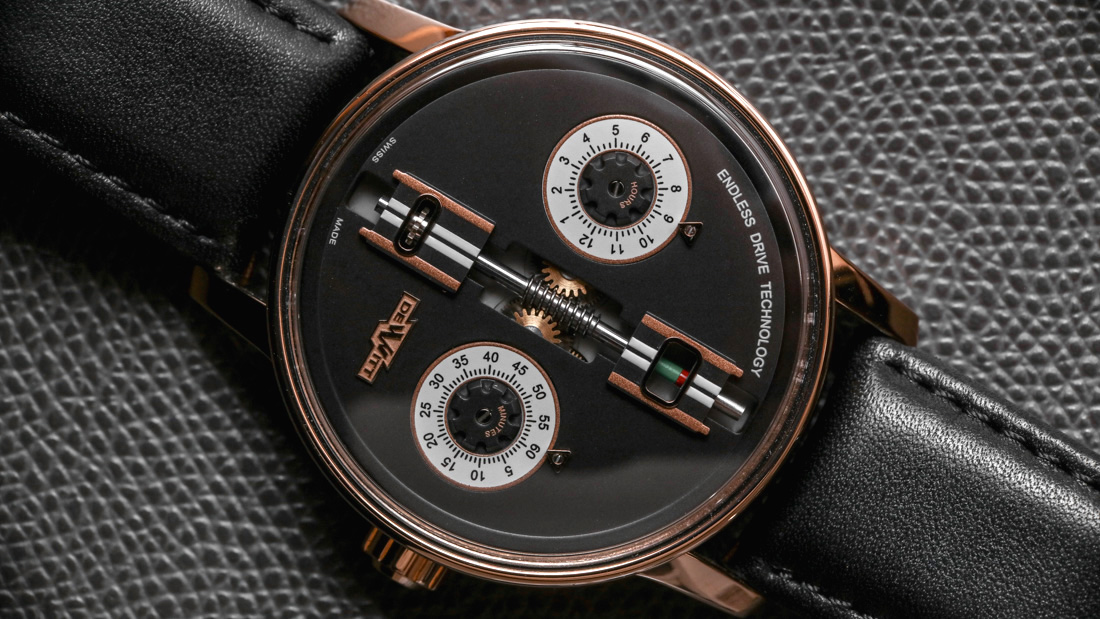 DeWitt has played with the Academia-style case for years now with models I mentioned in the beginning of this review and others like the Academia Skeleton, and this is just one of various versions. Notable for most of the Academia case collection is the crenelation-style aesthetic on the dial of the case, which has black rubber-coated sections of “DeWitt imperial columns” alongside the natural rose gold for an interesting high-contrast look. This design isn’t for everyone, but it does demonstrate ongoing effort by DeWitt for their products to look “different.” 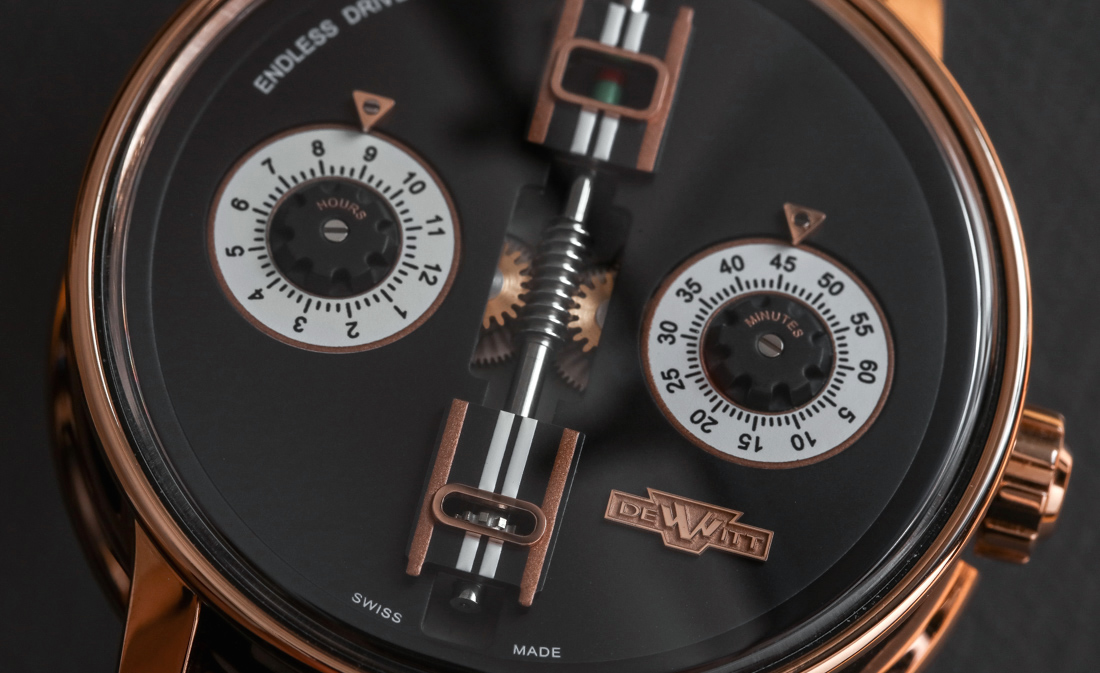 The opposing discs with their white rings and black interiors look a lot like eyes if you wish to view them in that regard. In fact, removing things like the DeWitt logo and text from the dial, you have a nice “robot face” which offers further personality to the design. I even like to imagine the time indicator arrows (in gold, of course) as small, expressive eyebrows. I am increasingly interested these days in watches that have “recognizable faces” on them – and because of that, the DeWitt Endless Drive gets a few extra favorable points from me. 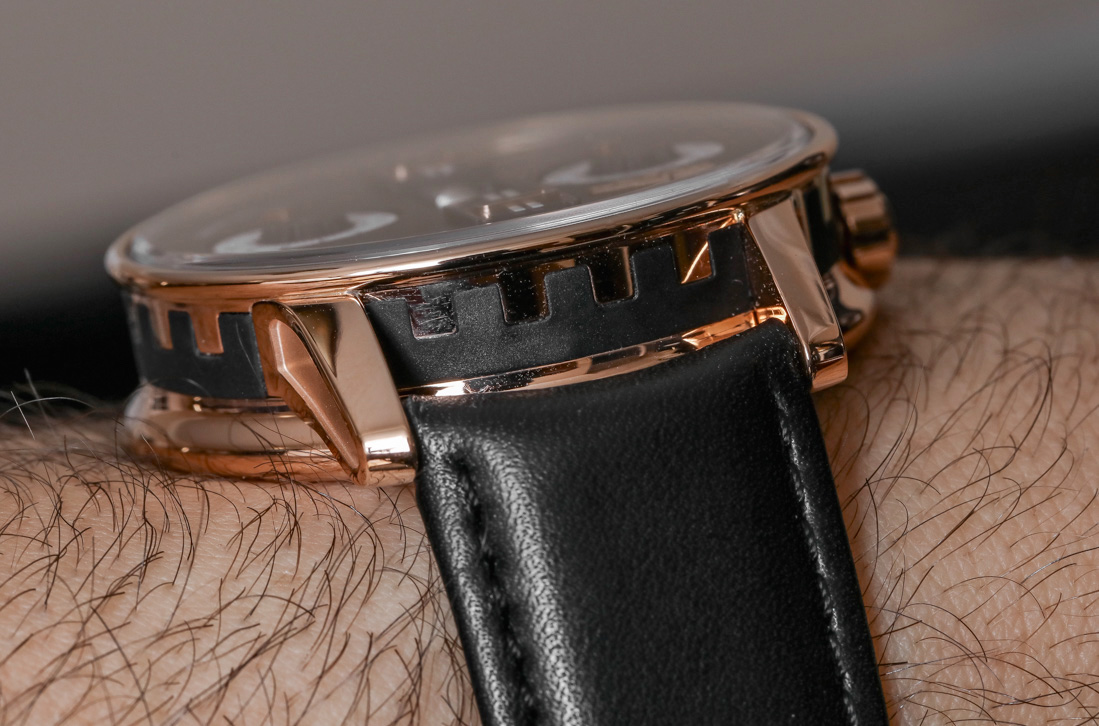 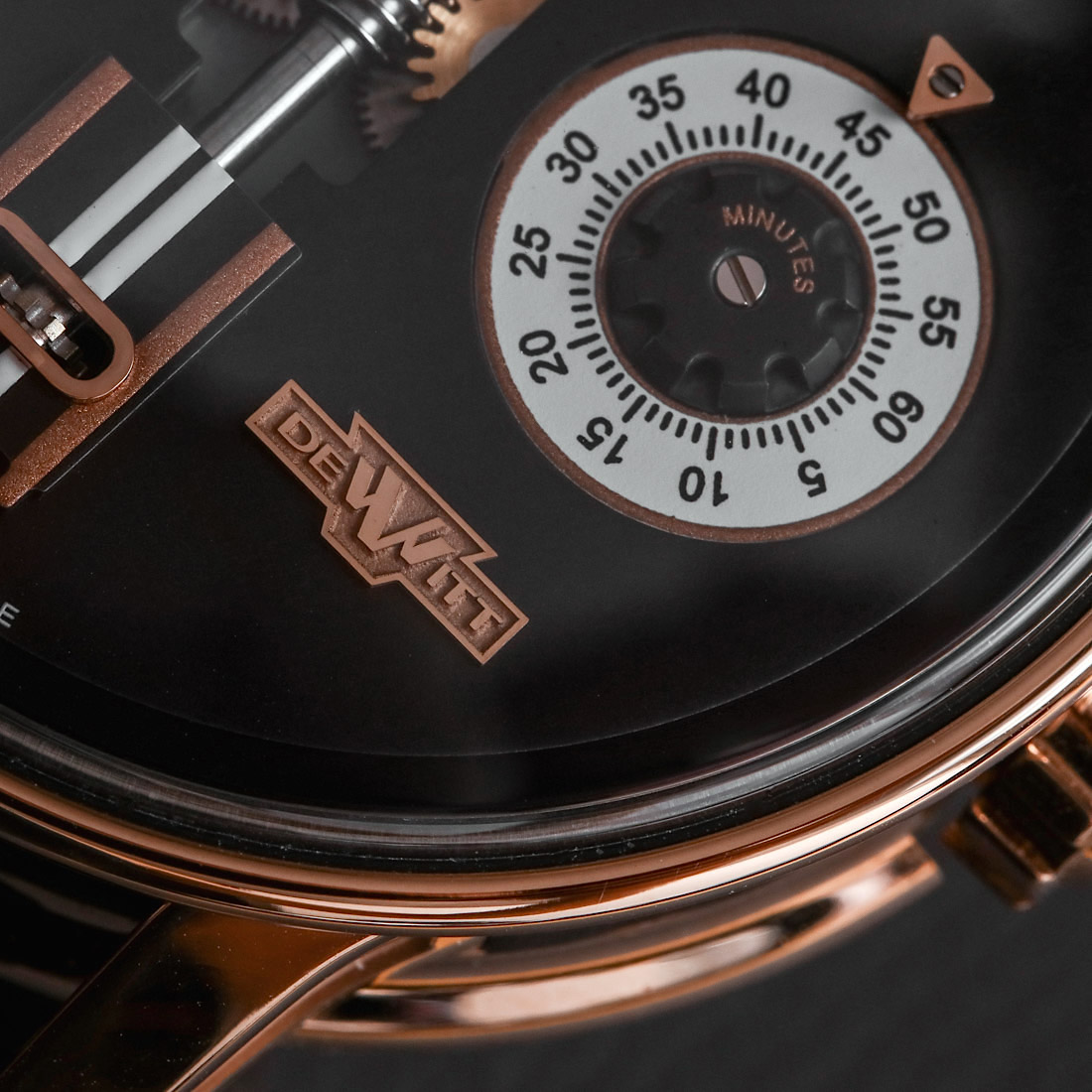 The endless drive system isn’t new, of course – only perhaps in watchmaking. I mentioned above that Jerome DeWitt is a fan of machines in general, and it is not hard to imagine that he has attempted to miniaturize an assortment of mechanical systems into wristwatch movements. The resulting mechanical implementation in the Academia Endless Drive is effective and to be admired. With that said, it isn’t exactly the answer to a question anyone has been asking. More so, the focus on inserting an endlessly turning drive shaft into a mechanical timepiece did seem to result in some limitations when it comes to legibility. I do think that more space could have been dedicated to the expression of the time, which, even with larger text on the hour and minute discs, seems outdone by traditional minute and seconds hands. Thus, the Academia Endless Drive watch succeeds more in its novelty and execution as a small wearable machine than it does as a functional wristwatch. I’m openly biased to preferring timepieces which are legible and easy to read. I know that many “collector’s watches” focus on other things versus mere legibility, but I want to make it clear what my tastes are. Plenty of people who opt to wear a timepiece like the DeWitt Endless Drive endlessly look at their phone to see the time, and rather look at their watch to make them smile. If you are looking for mechanical intrigue and personality, the Academia Endless Drive will likely not disappoint you. 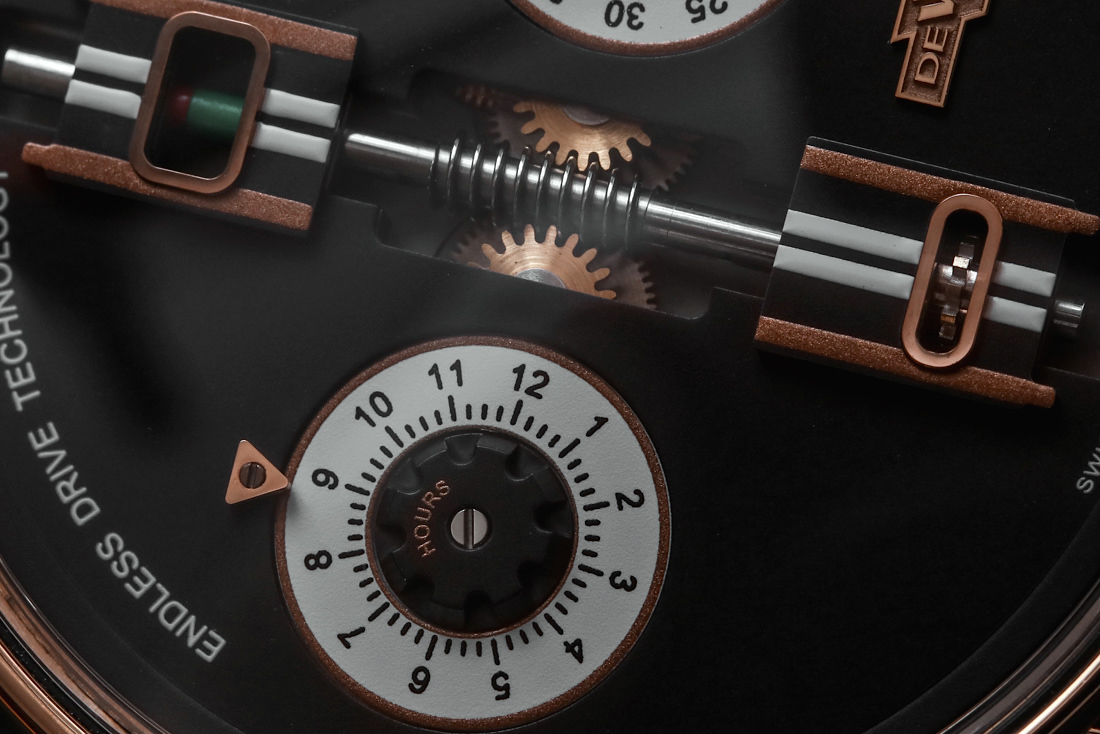 DeWitt continues to produce wearable, novel, mechanical art in an industry which has less and less of that each year given the current market. I support brands like DeWitt and want to see the best from them. I am still also curious what this watch would like look with two magnifiers over the crystal! Retail price for the 18k rose gold reference AC.ED.001 DeWitt Academia Endless Drive watch is $46,500 USD. dewitt.ch

Necessary Data
>Brand: DeWitt
>Model: Academia Endless Drive reference AC.ED.001
>Price: $46,500 USD
>Size: 42.5mm wide, 12.85mm thick.
>Would reviewer personally wear it: Yes, when wanting to impress otherwise seasoned watch nerds with something they’ve likely not seen before.
>Friend we’d recommend it to first: Lover of synthetic faces. Oh, and people who like the idea of putting an “endless drive” shaft into a traditional mechanical wristwatch.
>Best characteristic of watch: Satisfyingly delivers on the promise of the watch – as interesting or uninteresting as that might be to the observer. Overall fit and finish are good, as the in-house made movement is attractively designed.
>Worst characteristic of watch: Even with hour and minute disc changes, legibility is not likely to be amazing. Unnecessary elements on dial disturb perfect symmetry that in my opinion would have made the dial look that much better. Overly long (and not particularly interesting) strap for medium to small wrists.