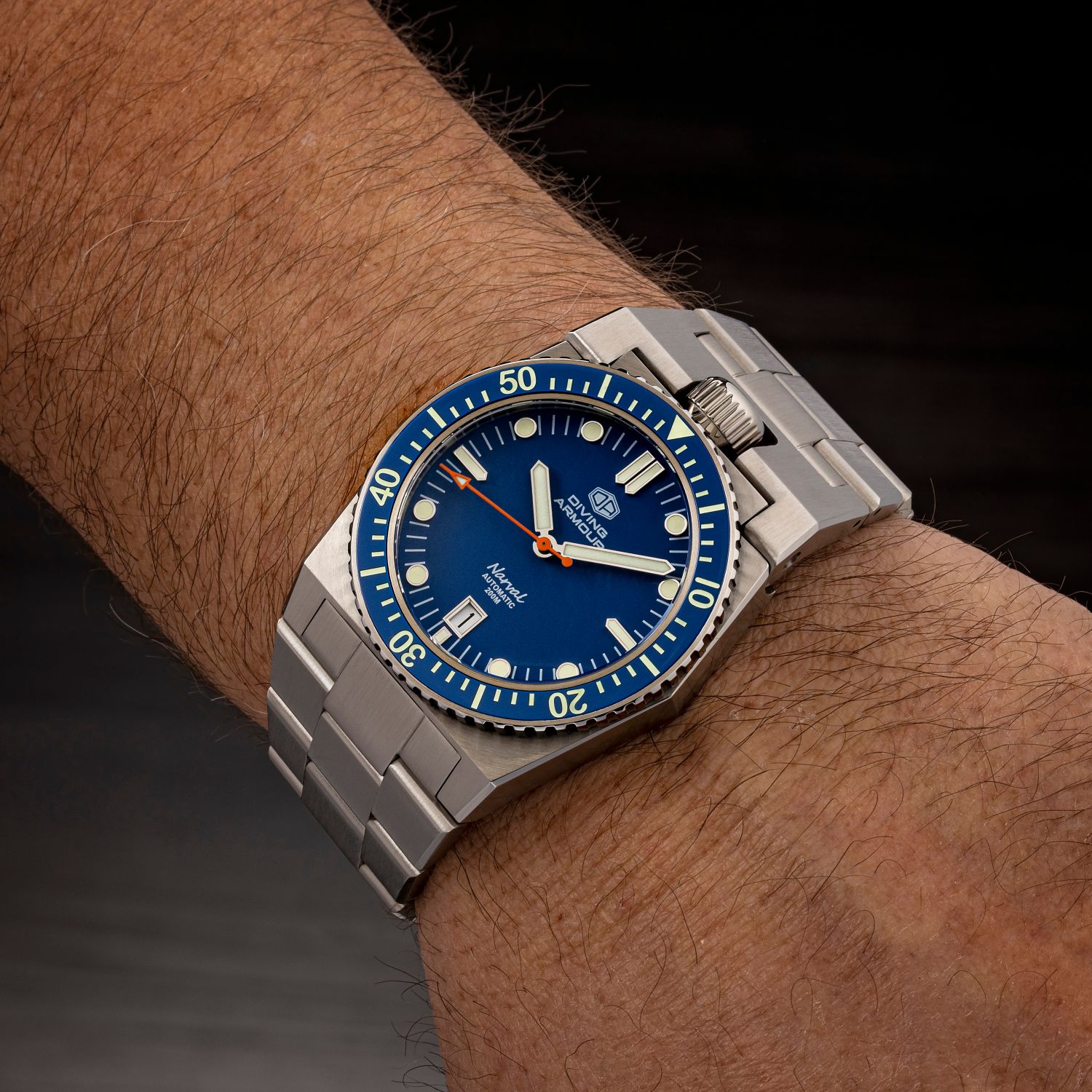 Beginning in the late 1950s and continuing into the 1960s, the proliferation of skin-diving and ultimately SCUBA-ready watches led to a multitude of novel design choices and interpretations. However, over the latter half of the 20th century, certain iterations of early dive watches had become far more prevalent. This resulted in an almost prototypical, “cookie-cutter” concept of what they should look like. Obviously, there are exceptions; nowadays, more often than not, these outliers seem to be produced by microbrands. It seems these operations, likely bolstered by their desire to stand apart, are willing to forego trends in order to create something singular within the market. For Arizona-based brothers Fernando and Juan Pablo Mansilla, the introduction of their new Diving Armour brand and flagship “Narval” model represent the next logical step in their horological legacy.

Whether or not you have heard of the Diving Armour founders, there is a strong likelihood that you have read about or seen one of their past creations. Responsible for the genesis of both Pontvs and Fonderia Navale, this duo has pushed the limits by experimenting with case materials such as bronze and brass. Despite the application of alternative metals, they consistently honor the aesthetics of “golden age” aquatic timepieces. In keeping with this tradition, the “Narval” is a model that draws inspiration from an oft-overlooked titan of tool-watches, the Triton Spirotechnique. 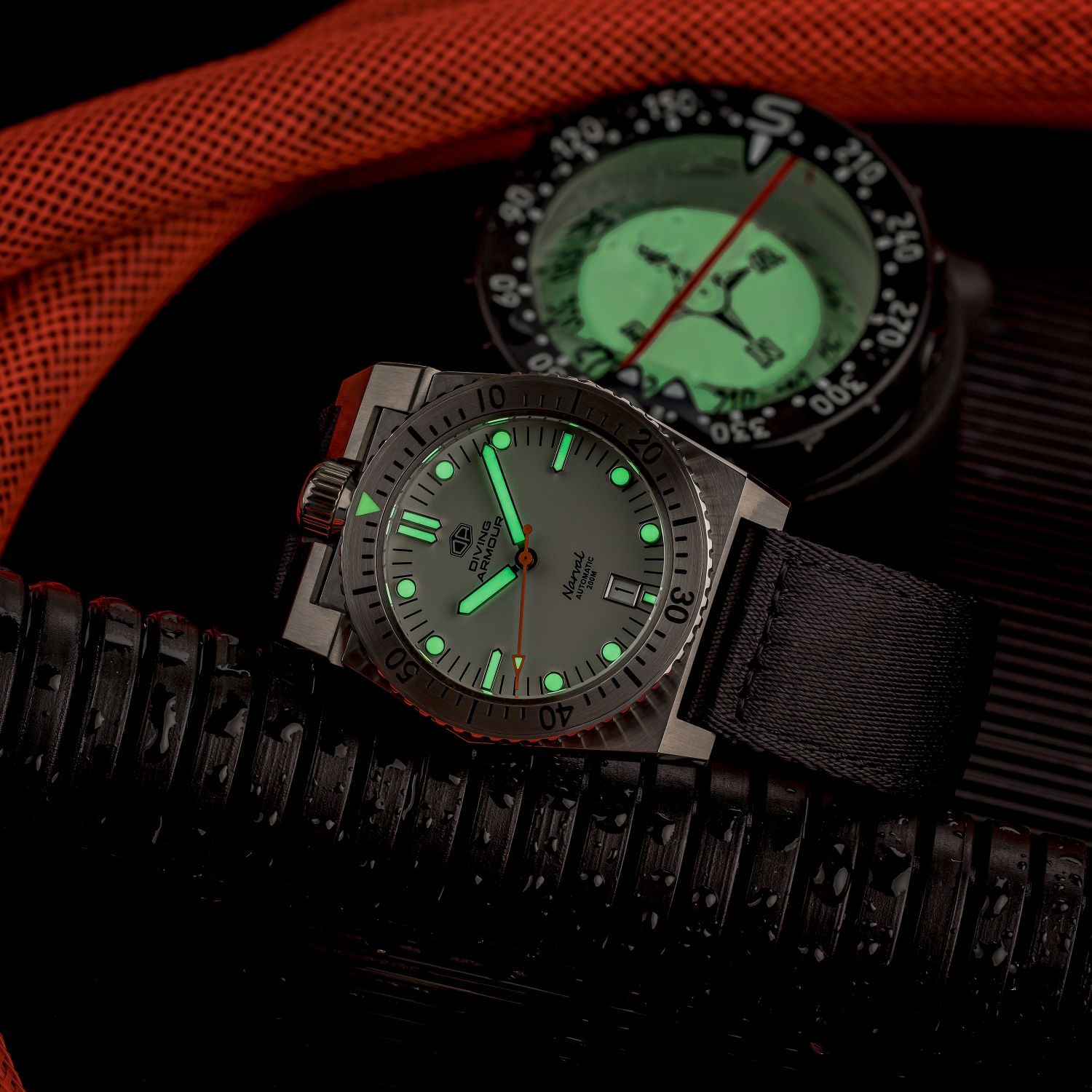 France is a country with a robust and rich history relating to diving and marine science. Intrepid explorer Jacques Cousteau and Emile Gagnan’s created the “Aqua-Lung,” the first self-contained underwater breathing apparatus, which effectively opened the wonders of the ocean to the masses. Of course, Cousteau went on to create a lasting legacy in popular culture (from Silent World to The Life Aquatic With Steve Zissou), marine conservation, and through his numerous business pursuits relating to water sports. Among the many wares sold through Cousteau’s gear companies were dive watches. These timepieces were specifically meant to accommodate the depths of descent made possible through the use of his patented apparatus. While selling products through his first company, La Spirotechnique, Cousteau commissioned Triton to manufacture a timepiece specifically built for serious dive enthusiasts. This collaboration led to the creation of an atypical and function-forward design that remains unique to this day.

The Narval, from Diving Armour, commemorates the clever elements incorporated by Jean Rene Parmentier in the original Triton Spirotechnique. Though this clearly pays homage at heart, the vintage aesthetic is tempered by the incorporation of modern materials and manufacturing. The Narval is set to be launched through a Kickstarter campaign and will feature four different color selections. With ergonomics in mind, the 316L Stainless Steel case measures just 40mm in diameter and cuts a thin silhouette at 12.5mm in total height. Special attention has been paid to the lug design. Despite appearing to resemble an integrated bracelet at a distance, it actually allows for virtually any 22mm strap to be utilized. The included bracelet features a generous taper from the lug to the clasp which further improves wearer comfort while further building upon the overall 1960’s style and feel on-wrist. 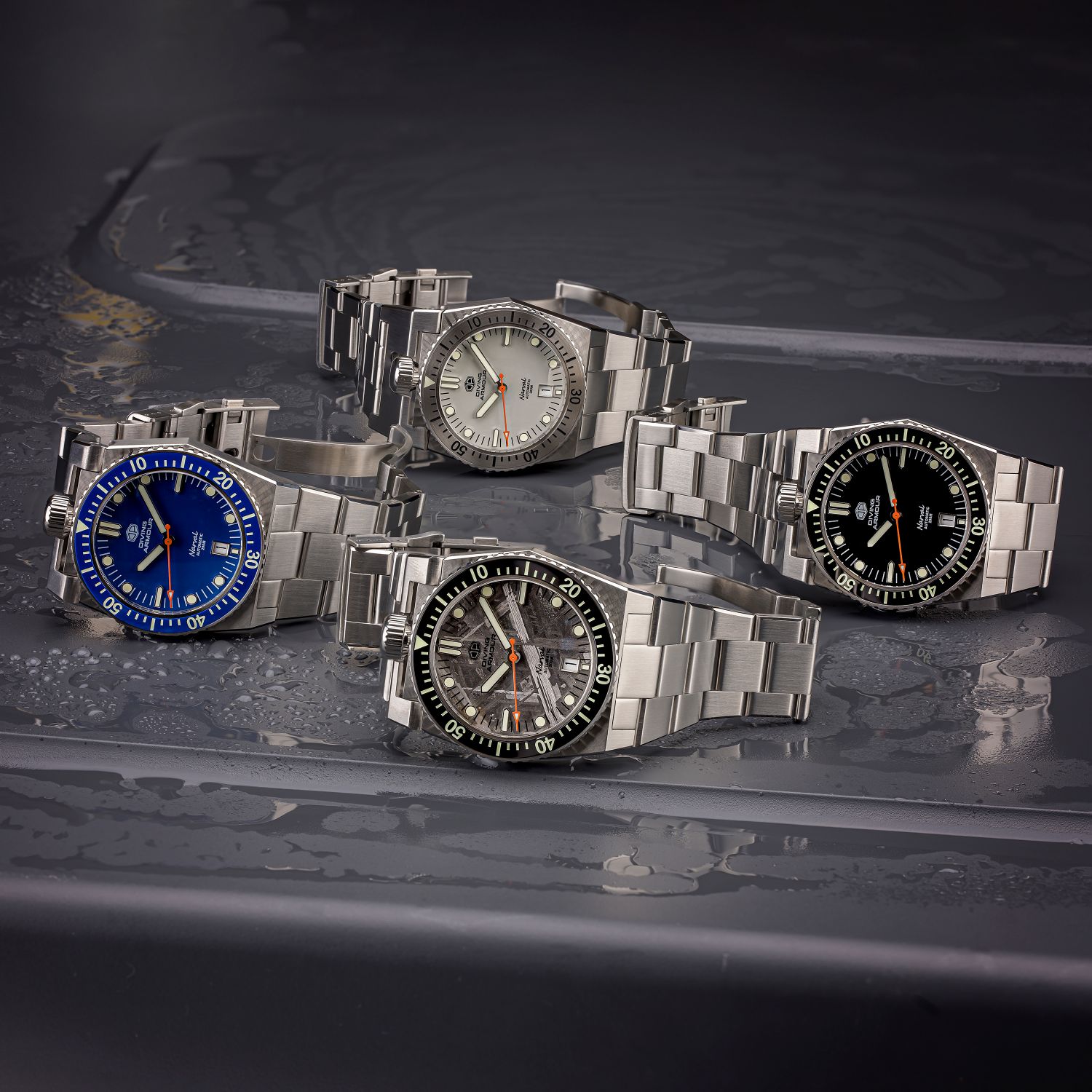 The most notable feature of the Narval is the near one-of-a-kind 12 o’clock crown placement. The location atop the peak of the case ensures that this vital component is protected by the armor-like endlink built to encapsulate it; additionally, keeping the crown off of either side of the case mitigates the risk of it digging into the forearm while in use. The angular shape of the Narval is adorned with either a ceramic or steel bezel insert, depending on your choice of dial color. Availability in Black, Gray, Blue, and Meteorite ensures that everyone can find a color that speaks to them. While Black and Blue remain comfortably in the “classic dive watch” color palette, the matte Gray dial is coupled with a stainless steel bezel that makes for a decidedly utilitarian look. For those who look to the stars as often as they dip below the ocean waves, the meteorite dial provides a pleasing amalgam of sea and sky. The crystalline texture creates an extra layer of dimensionality beyond what is typically found with a more “run-of-the-mill” dial material. 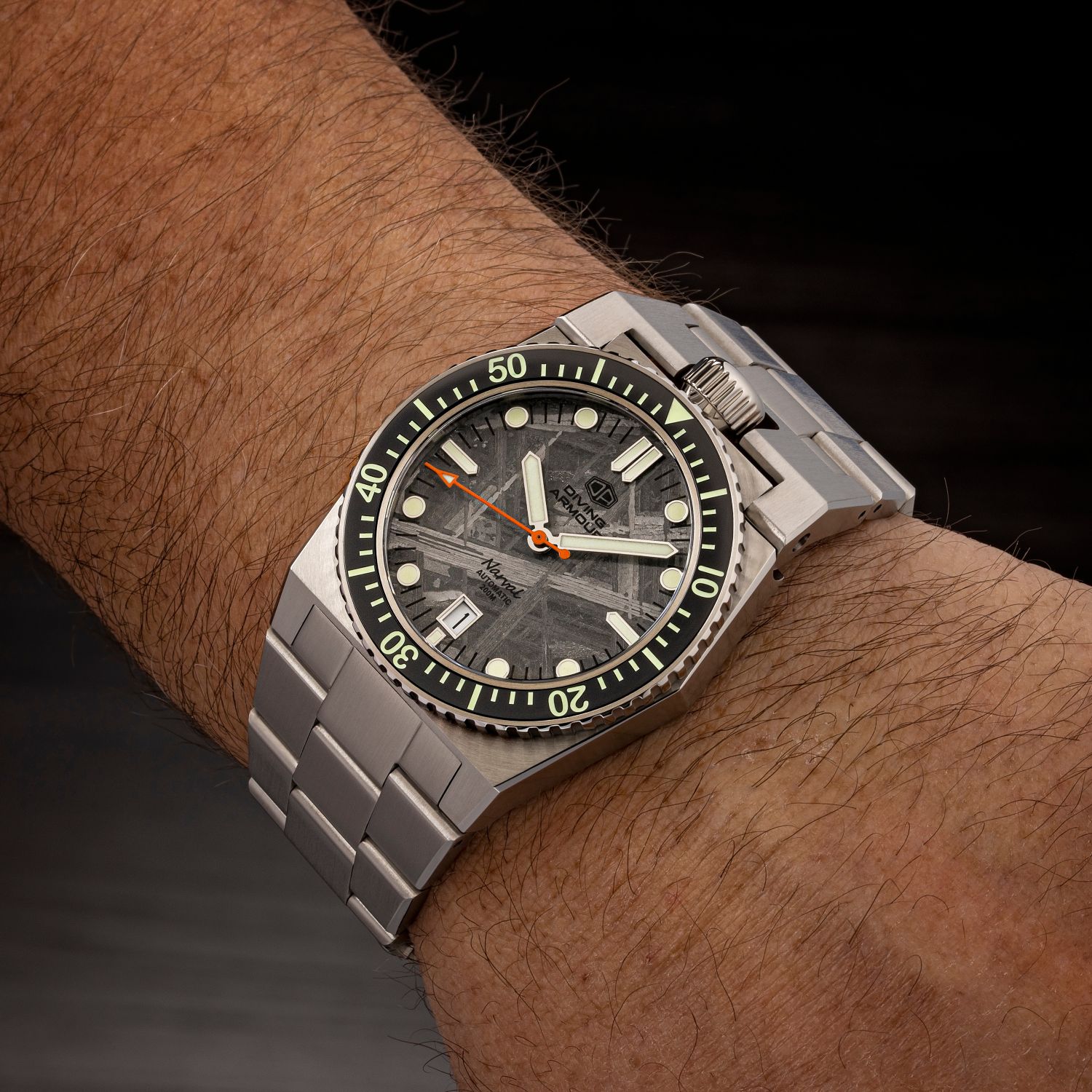 Each model comes equipped with the Japanese Miyota 9015 automatic movement, which has proven over the years to be both reliable and effective. Protecting this powerhouse is a solid screw-down caseback with a relief engraving of the Carmagnolle Diving Suit, regarded as the first fully articulated diving armour. Beneath the single dome sapphire crystal is a generous application of Swiss C3 Super LumiNova on the broad hands, indices, and within the ceramic bezel. There is also a date window discreetly placed at six o’clock, just above the lume plot. This unobtrusive location allows the wearer to keep track of the day without sacrificing legibility, in and out of the water. 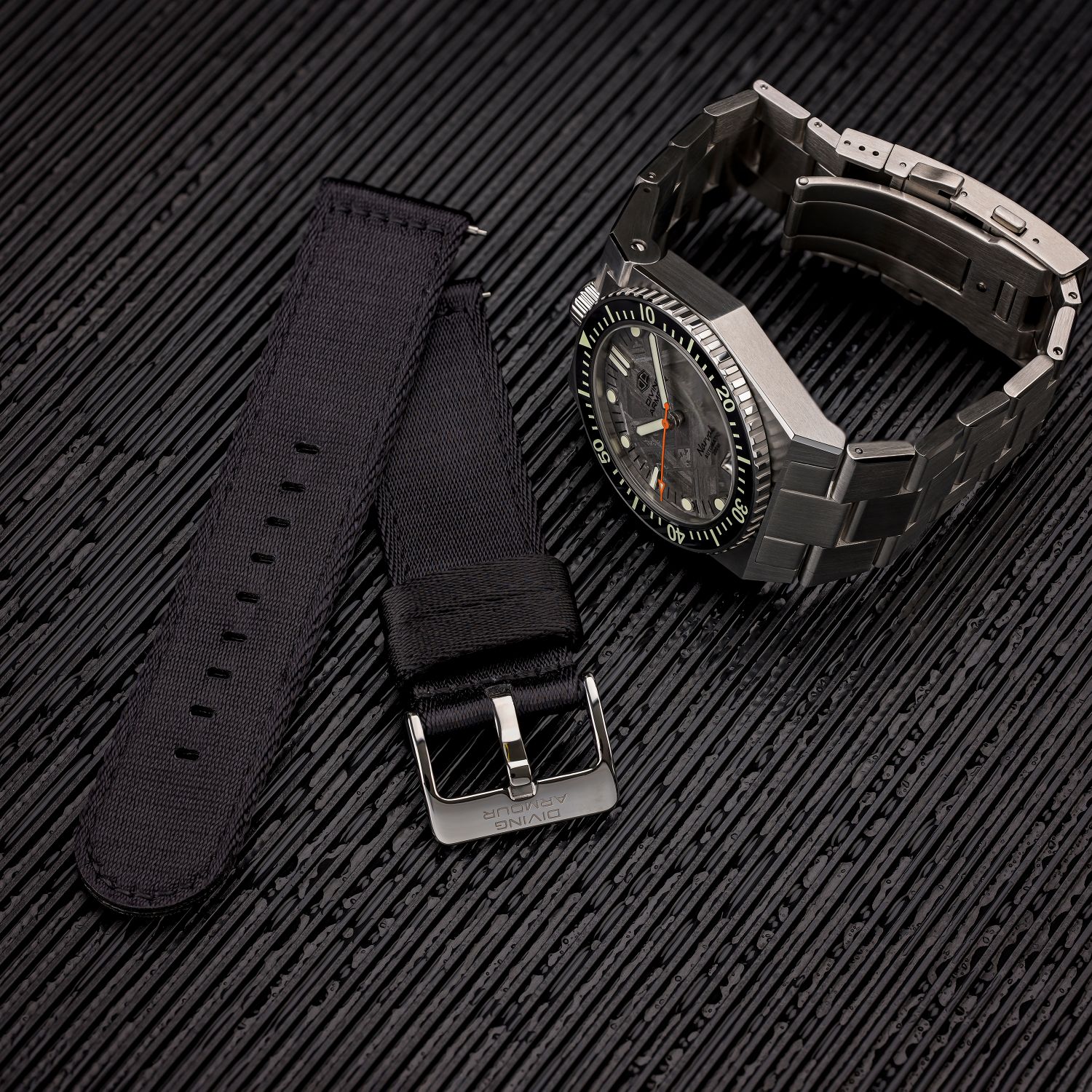 Beginning July 1st, the Black, Blue, and Gray Narval divers will be available on Kickstarter for the “early bird” price of $399USD, making them a standout value proposition. The Meteorite dial variation is just a bit more, priced at $499. Each model will include the bracelet along with an additional nylon strap. So, if you are interested in the aesthetic of 1960’s French divers, or you just need a durable timepiece that can be put to work in an active lifestyle, the Narval is tough as nails and ready for duty.