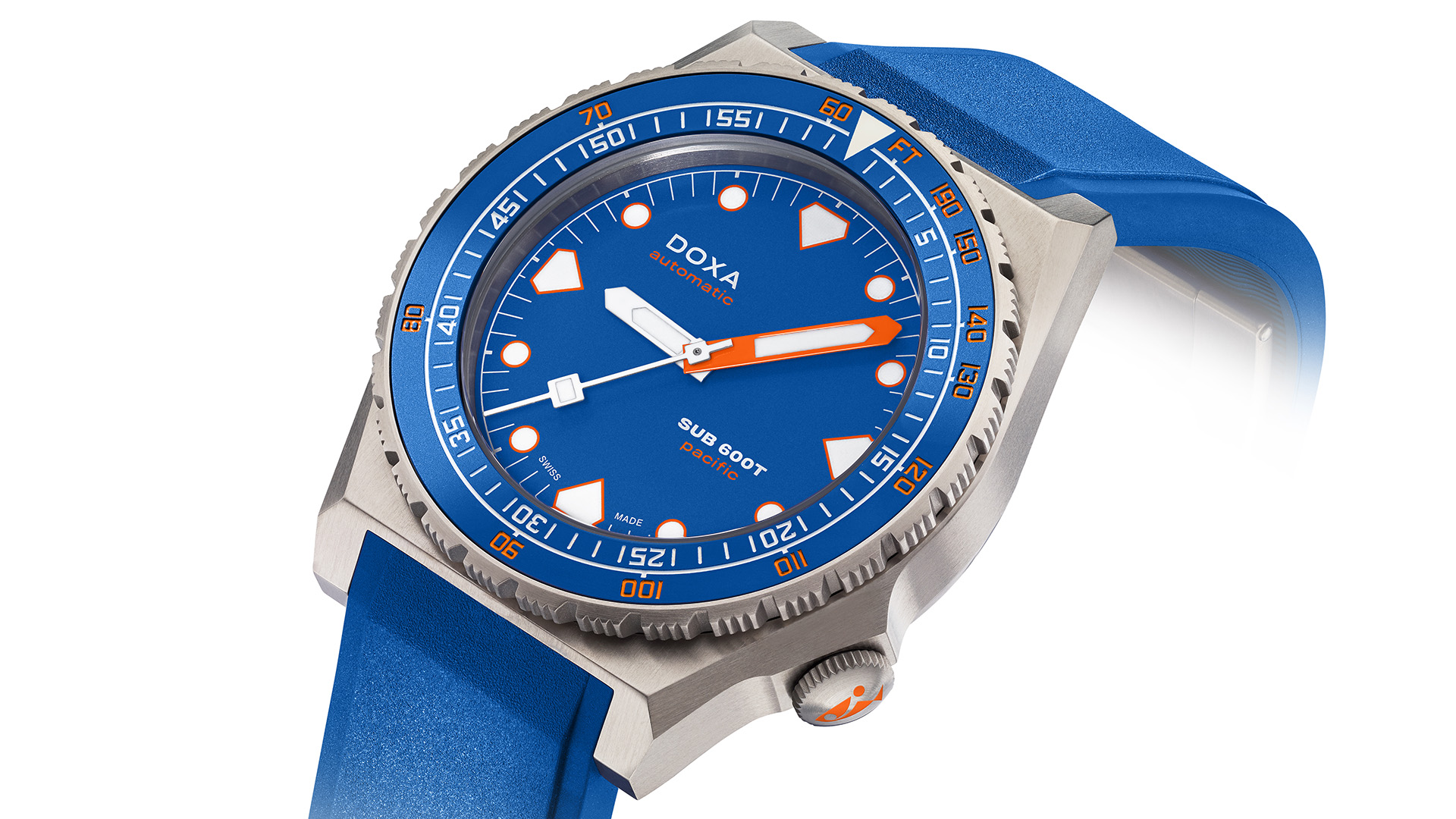 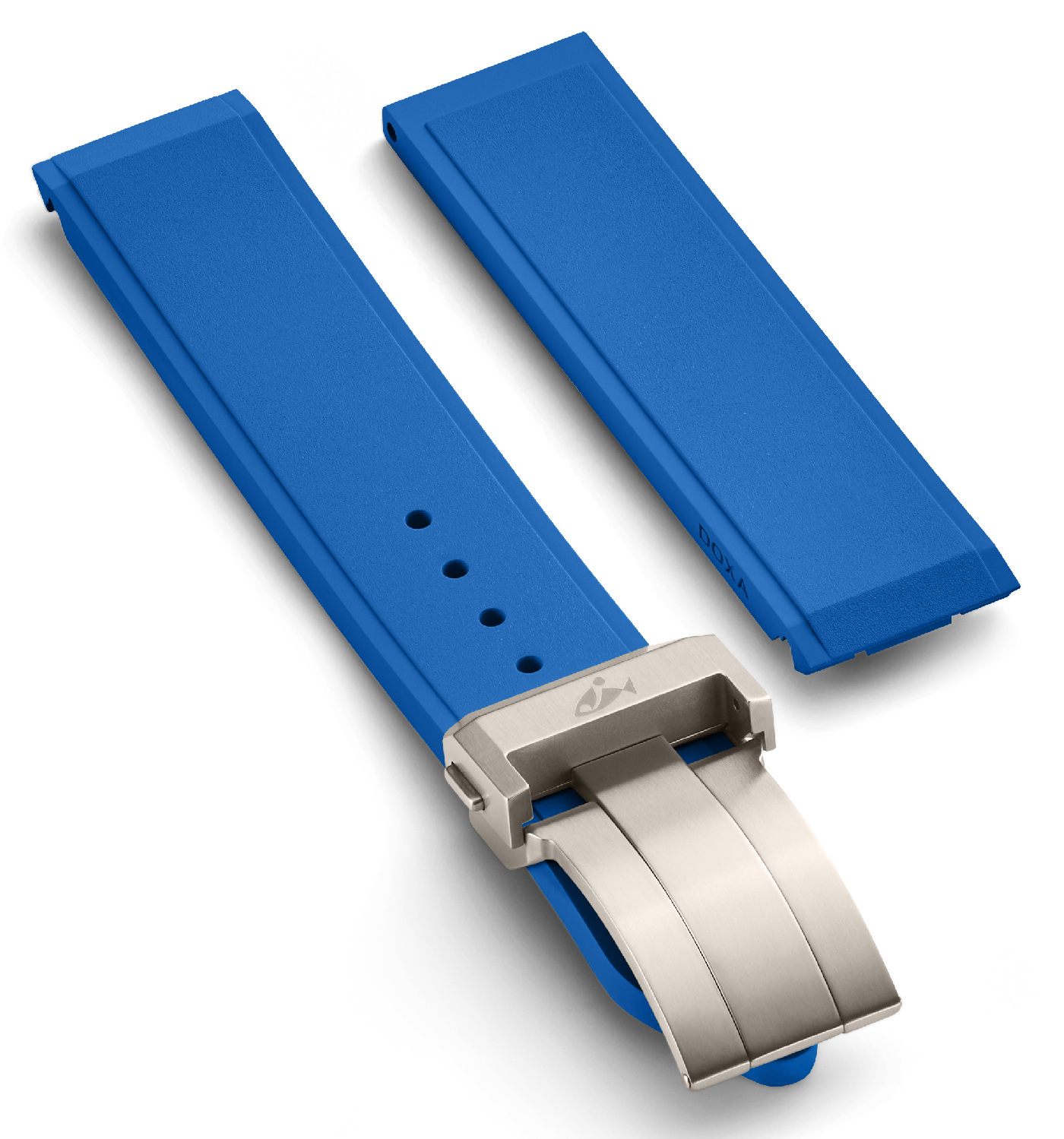 When enthusiasts think of Doxa, the watch that most likely comes to mind is the orange-dialed, cushion-cased Sub 300 Professional diver of the 1970s. Doxa has spent over half a century iterating upon the Sub 300 concept, but the brand has a rich dive watch heritage outside this core design. The Sub 600 introduced in the ‘80s is a prime example, with a bold, angular aesthetic in stark contrast to prior Doxa designs but the same dedication to rugged functionality. Although the Sub 600 has fallen out of the brand’s lineup in recent decades, the series still has its diehard fans, and for its latest release, Doxa has partnered with Australian watch media brand Time+Tide to deliver a modern reimagining of this ‘80s sporting icon. The new limited edition Doxa Sub 600T Pacific revives the brand’s sharp ‘80s diver aesthetic with a dark titanium twist and a commitment to the brand’s creative naming style. 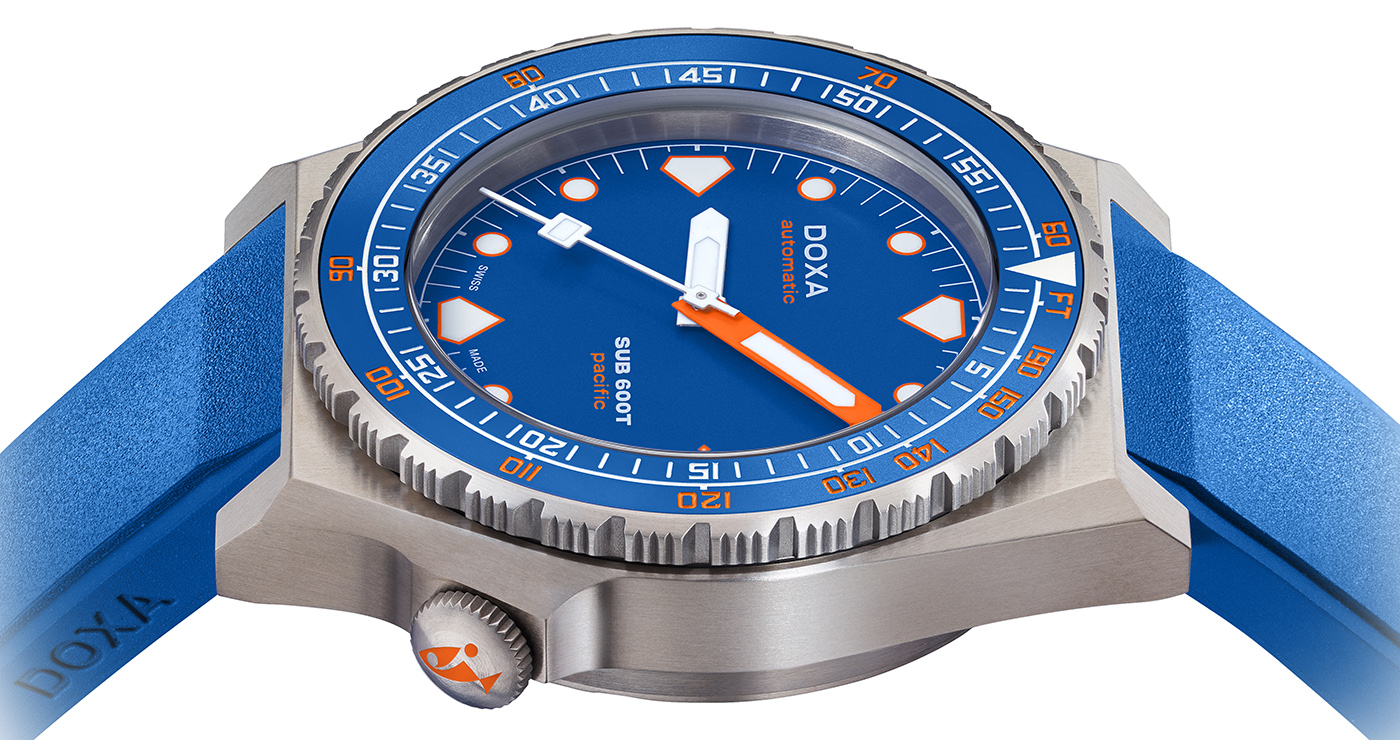 From the very first glance, the Doxa Sub 600T Pacific’s case gives a far more serious, almost brutalist impression than the familiar Sub 300 series. Measuring in at 40mm with a 47.6mm lug-to-lug length, the Sub 600T Pacific is rendered in fully brushed titanium for a utilitarian matte look in initial images. The form itself is a sharply squared-off departure from the sloping curves of the Sub 300 line, with abruptly beveled lugs, planar surfacing, and a broad tapering chamfer running the length of the case. The distinctive thin signed crown uses an unusual hidden guard, with the majority of the crown body sunk into a squared-off case projection at 4 o’clock. The bezel is similarly aggressive in design, with a bold sawtooth edge and a cobalt blue insert with Doxa’s signature decompression scale in white and bright signal orange. Around back, the solid caseback features a detailed engraving of Doxa’s fish emblem against a background wave pattern. As the name might suggest, Doxa rates the Sub 600T Pacific for a super-capable 600 meters of water resistance. 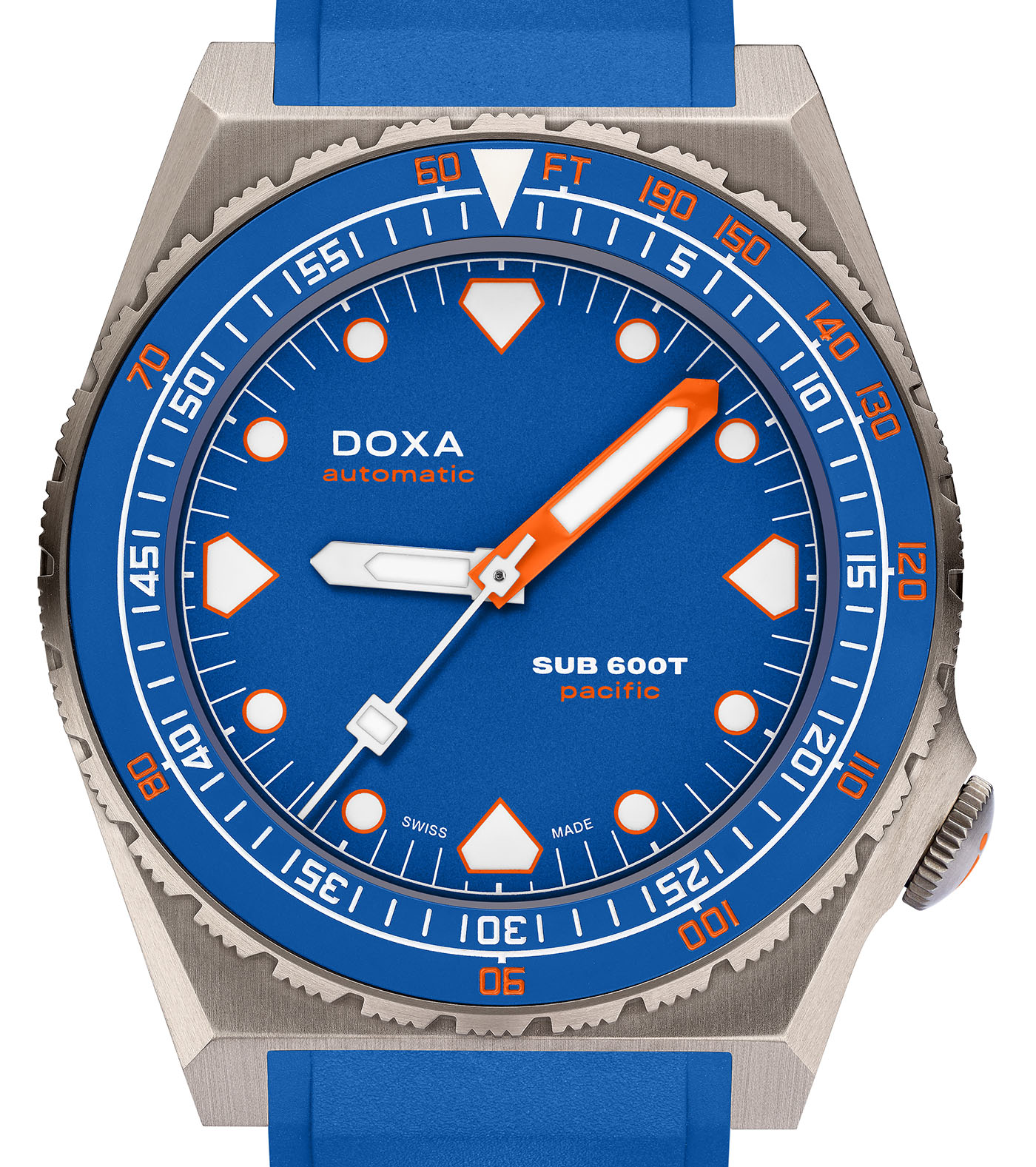 As with the case, the dial of the Doxa Sub 600T Pacific advances a markedly different stylistic concept than the more familiar Sub 300 series but maintains a notable brand resemblance. The straight sword handset in polished steel and bright orange is a Doxa hallmark, as is the distinctive square lume pip on the seconds hand. In keeping with Doxa’s tradition of giving its dial colors evocative names (such as the orange Professional and the navy blue Caribbean), the saturated matte cobalt blue here is referred to as Pacific Blue, with stylized “Pacific” text at 4 o’clock to reinforce the look. The Sub 600T Pacific also puts its own spin on the traditional set of diver indices, with orange printed highlight rings and distinctive “home plate” style indices at 12 o’clock, 3 o’clock, 6 o’clock, and 9 o’clock. Doxa’s decision to use a no-date layout for the Sub 600T Pacific gives the design a clean and balanced look in images. 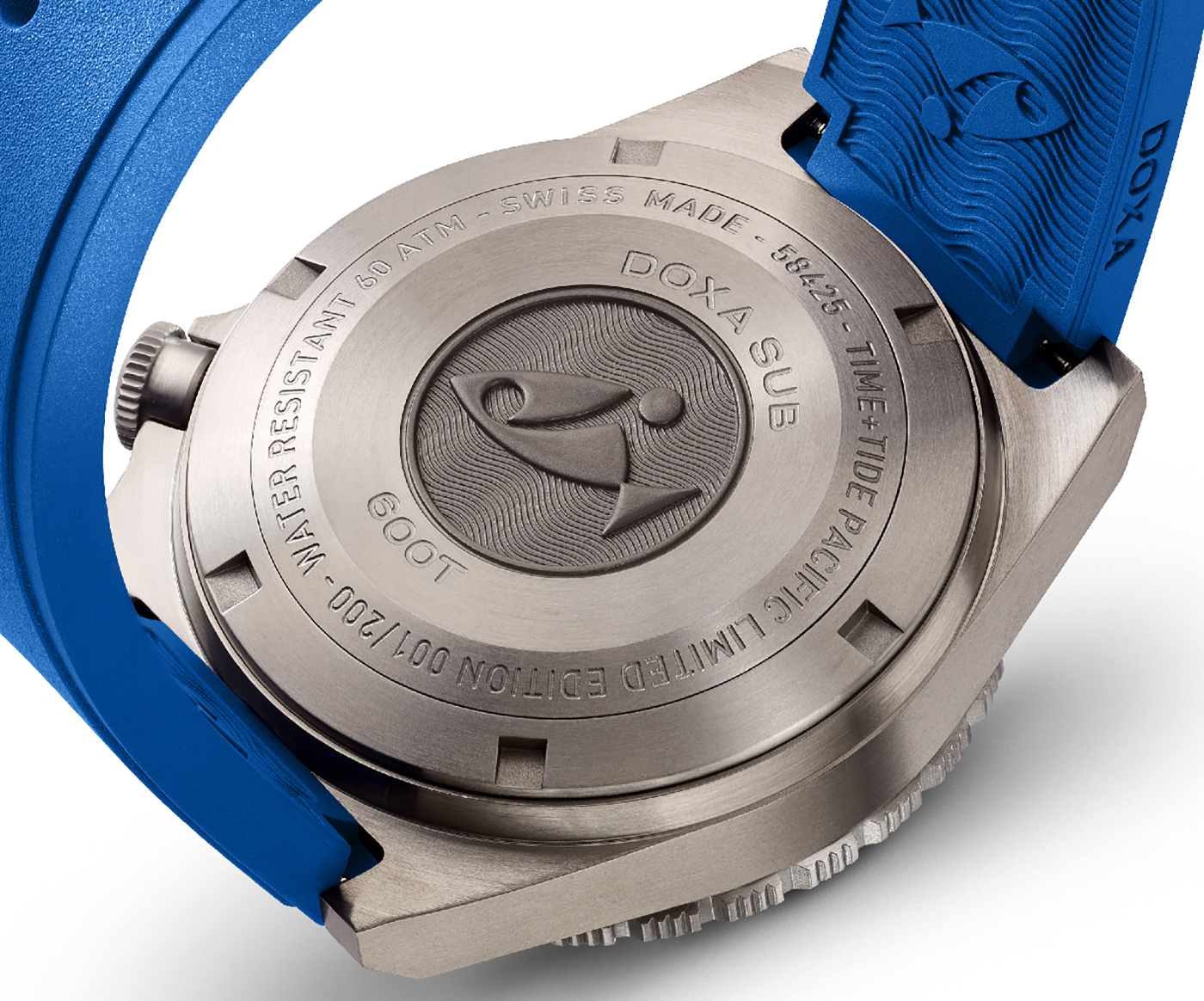 Inside the Doxa Sub 600T Pacific beats the ubiquitous Sellita SW200-1 automatic movement. The SW200-1 is a standby for much of the watch industry due to its mix of reliability, ease of servicing, and affordability, but its performance is somewhat dated with a 38-hour power reserve at a 28,800 bph beat rate. Doxa completes the Sub 600T Pacific with a dial-matching blue rubber strap. Lightly textured with a raised central ridge, this sporty strap is finished with a signed two-button titanium deployant clasp.

With a sharp angular aesthetic paying tribute to an overlooked period of the brand’s history and a bold new colorway, the limited edition Doxa Sub 600T Pacific is a stylishly offbeat retro diver and a potential harbinger of things to come for the marque. Only 200 examples of the Doxa Sub 600T Pacific will be made. The watch is available now through authorized dealers at an MSRP of 1,890 CHF. For more details, please visit the brand’s website.