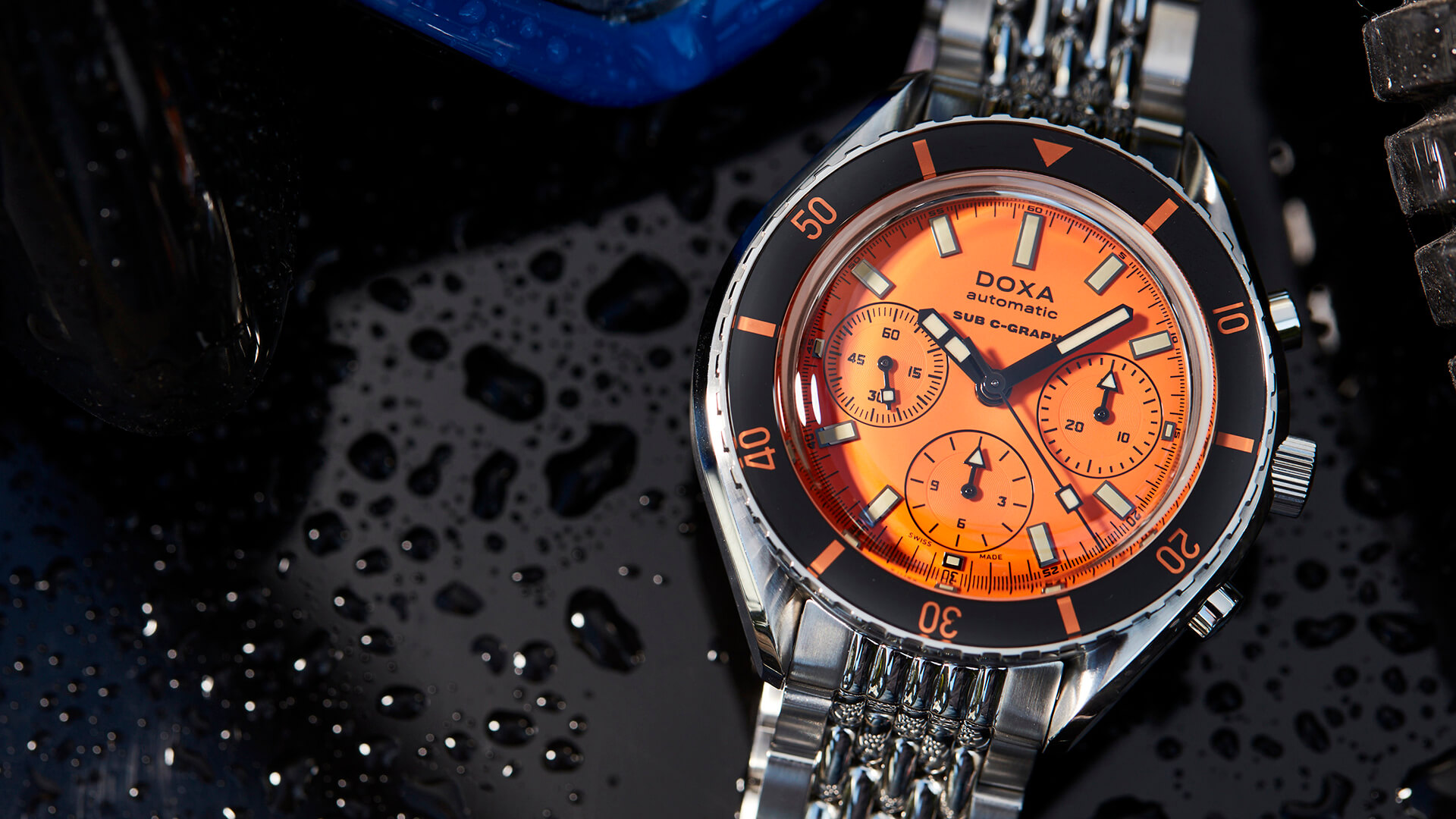 While the classic decompression bezel-equipped Sub 300 is undoubtedly Doxa’s signature timepiece, the smaller vintage-inspired Sub 200 series has quickly built a cult following of its own among fans. Its wide variety of classic Doxa color options and handsome midcentury diver design cues have formed quite the winning combination in its fiercely competitive market segment, and for its latest release, Doxa adds another popular ingredient to the mix in the form of a chronograph. The Doxa Sub 200 C-Graph diver chronograph series brings a distinctly ‘60s take to the diver chronograph formula, with vibrant and playful results. 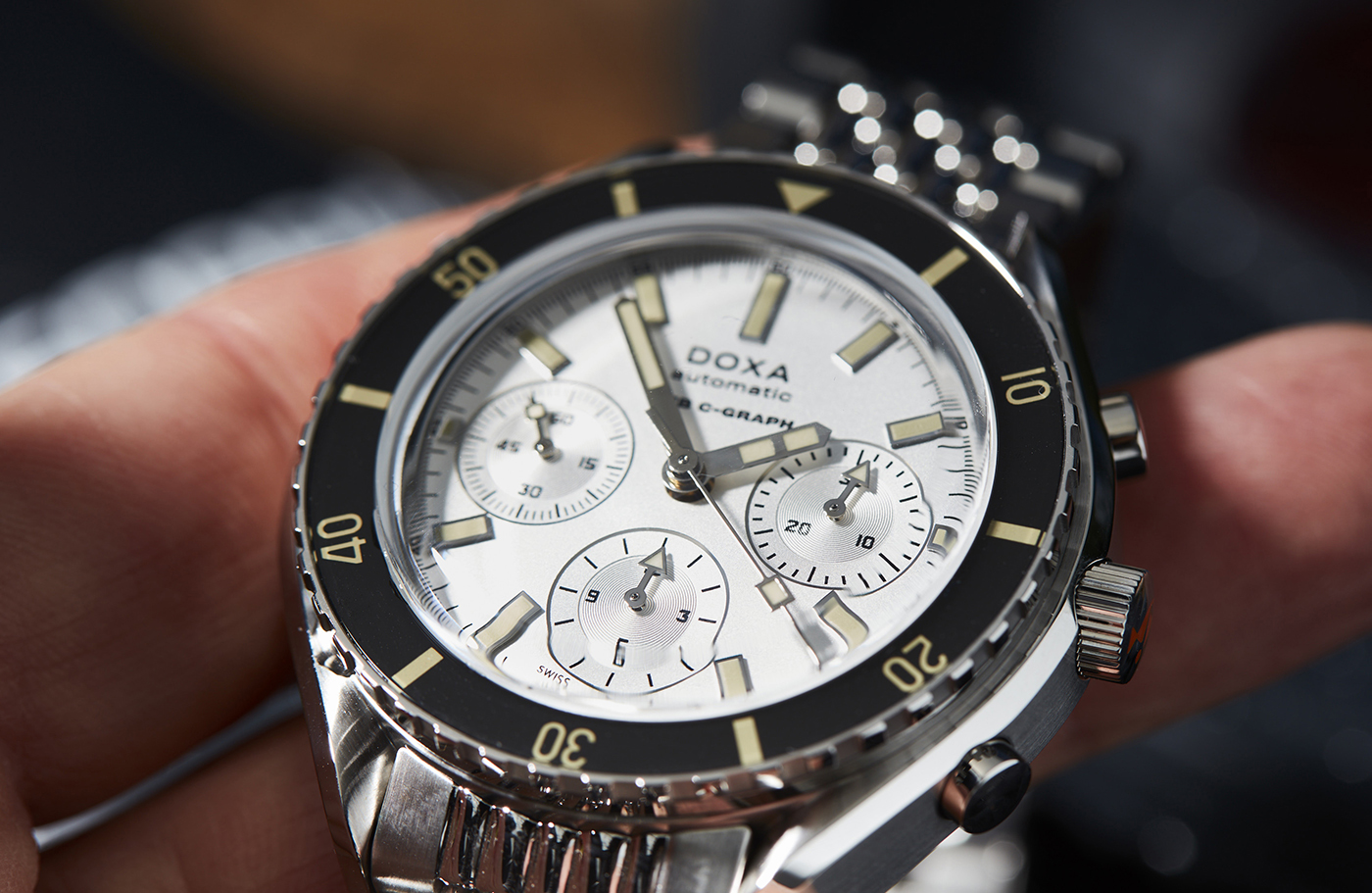 The stainless steel case of the Doxa Sub 200 C-Graph keeps the overall form of its three-handed stablemate with a twisted lug design that calls to mind both the ‘60s Omega Seamaster 300 and the classic Eberhard Scafograf 300 diver without feeling like a direct copy of either. While the standard Sub 200 sits at 42mm in diameter, however, the Sub 200 C-Graph is substantially heftier at 45mm. That said, this case design is notorious for wearing smaller than the numbers suggest, and thanks to the short lugs. Doxa claims the lug-to-lug length also sits at 45mm. Based on press images, that information is nearly impossible to confirm, but these nearly square dimensions may help this case from becoming too overwhelming on the wrist. Outside of the size increase and of course the inclusion of pushers, the other major cues from the standard Sub 200 case return here including the vibrant use of color on the dive bezel insert and the orange Doxa fish logo on the screw-down crown. Despite the chronograph complication, the Doxa Sub 200 C-Graph still manages a solid 200 meters of water resistance. 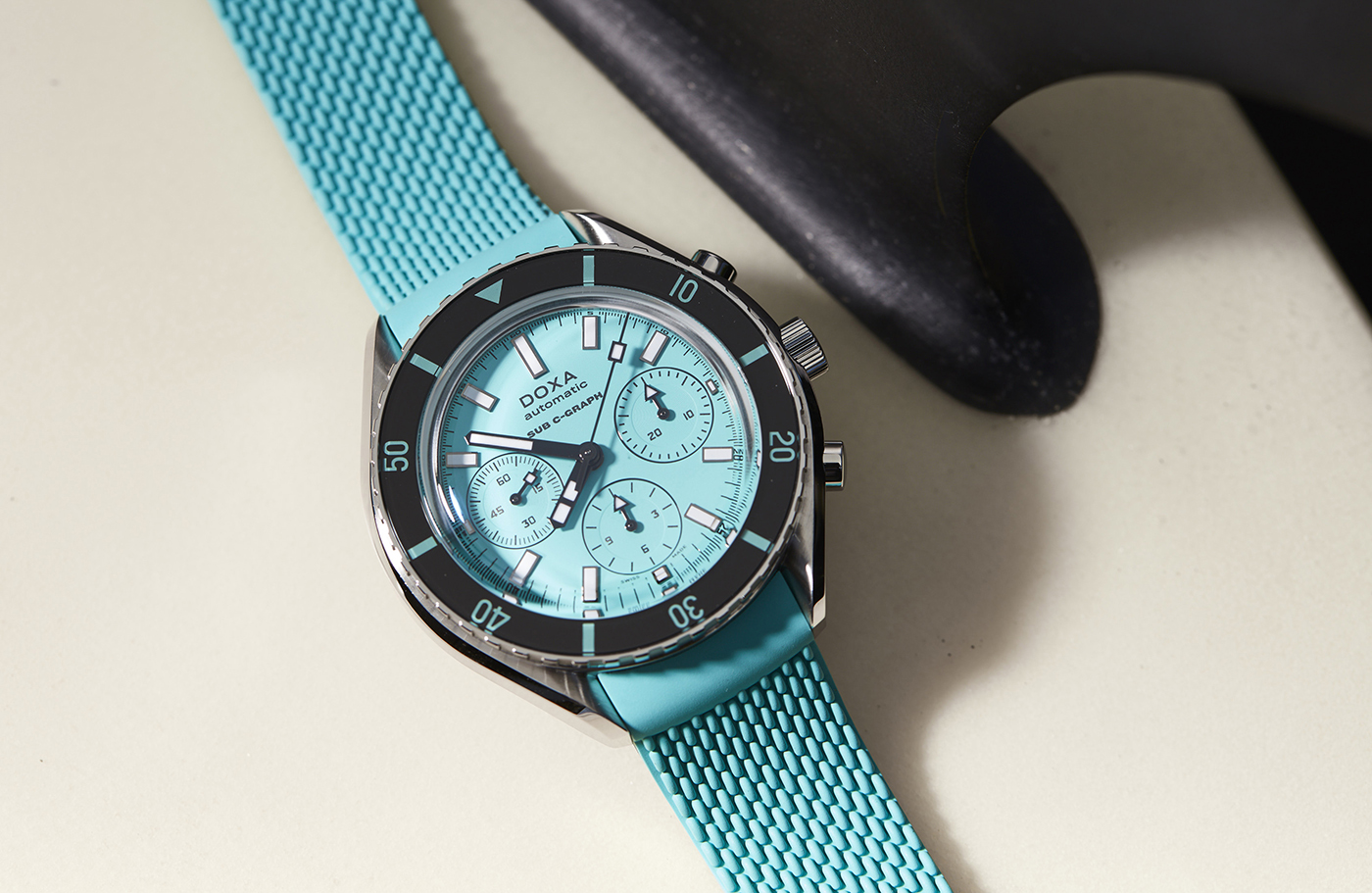 Intensely colorful dials are a Doxa staple, and the Sub 200 C-Graph continues this tradition faithfully. No less than six dramatically named color variants are available, including the signature orange Professional, the navy blue dial Caribbean, the lemon yellow Divingstar, the turquoise dial Aquamarine, the silver Searambler, and the black dial Sharkhunter. While the colorways themselves run the gamut from the reserved black dial and light khaki accents of the Sharkhunter to the flamboyantly bright orange of the Professional, the base dial design for all six models remain the same. The applied rectangular indices and the pointed baton handset are carried over from the base Sub 200, but the Sub 200 C-Graph’s addition of three chronograph subdials is not as starkly utilitarian as it first appears. Each of the subdials is finished with a partial azurage treatment for a touch of flash in changing light, and every hand is lumed. For the chronograph hours and minutes subdials, Doxa opts for a lumed arrow tipped hand, while the running seconds hand is tipped with a distinctive lumed square. Together with the three bold lines of text at 12 o’clock, these three subdials form a handsomely balanced design, and the conspicuous omission of a date window keeps things cleanly symmetrical. 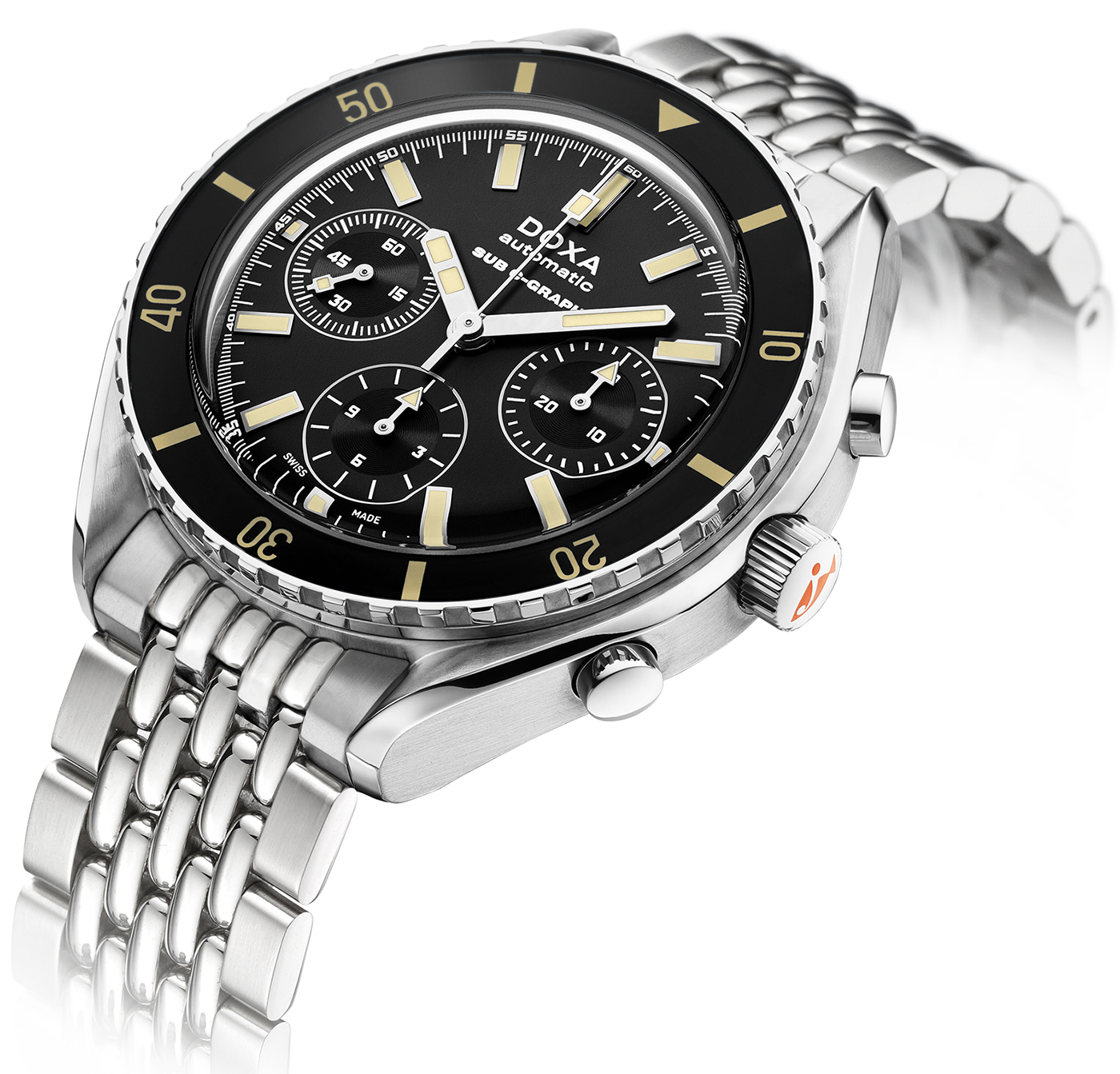 Inside the Doxa Sub 200 C-Graph series beats the Sellita SW510 b automatic chronograph movement. The SW510 b is a no-date variant of the long-running SW500 family of movements, and while this omitted complication ostensibly helps to slim down the overall package the Sub 200 C-Graph still measures in at a formidable 17.4mm thick. In terms of performance, the SW510 b offers a 48-hour power reserve at a 28,800 bph beat rate. 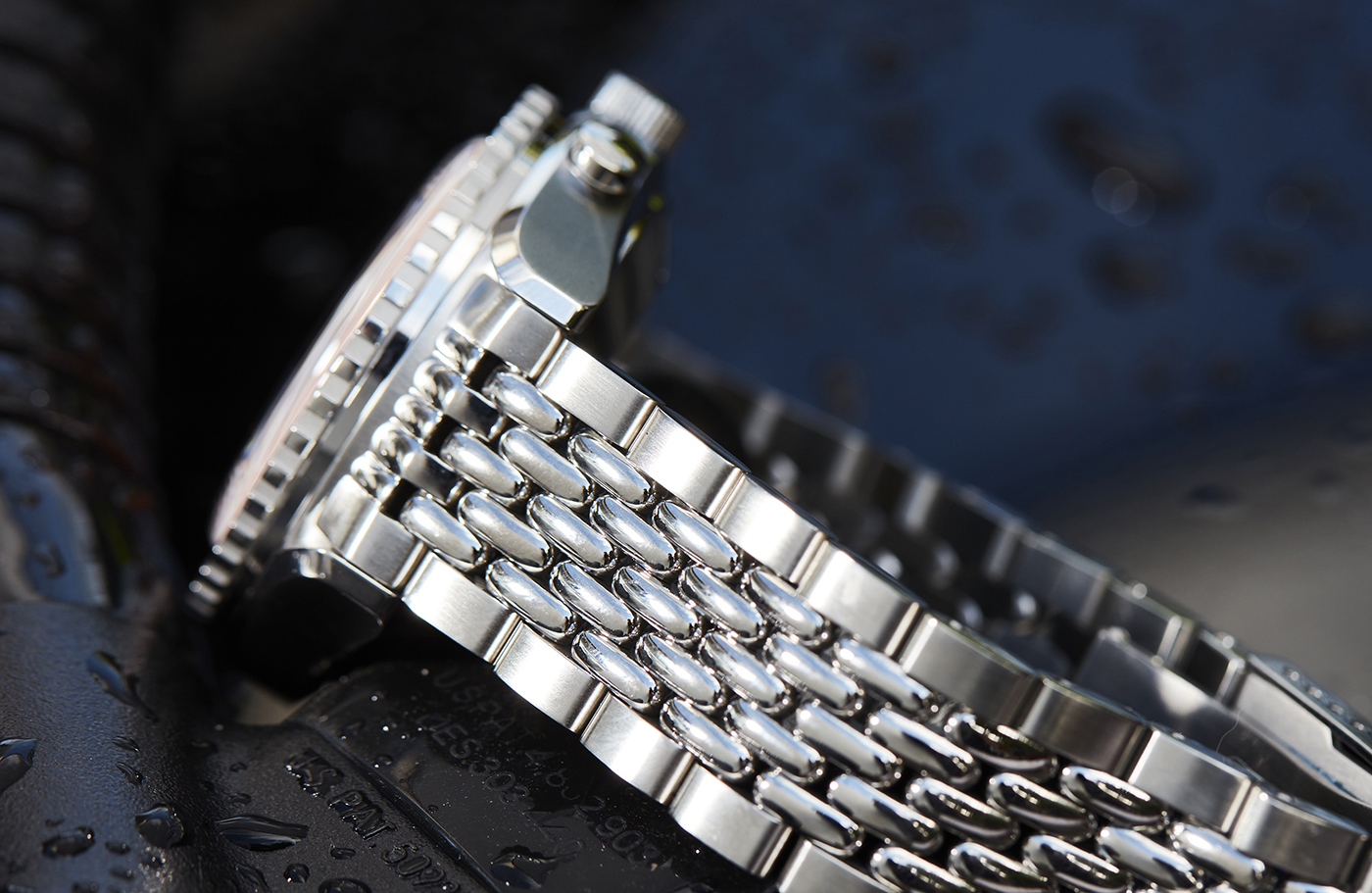 Each of the six variants in the Doxa Sub 200 C-Graph line is offered with the same pair of strap options. The first is Doxa’s own beads of rice bracelet, a fittingly vintage inflected companion to the ‘60s inspired case and dial with distinctive polished center links and a diver’s extension in the clasp. For those that prefer rubber straps, all six dial variants are also offered with a dial-matching strap in a Milanese-effect pattern. In images, this strap looks to lead to some dramatic pairings on the wrist, particularly for more colorful models like the Aquamarine or the Divingstar. 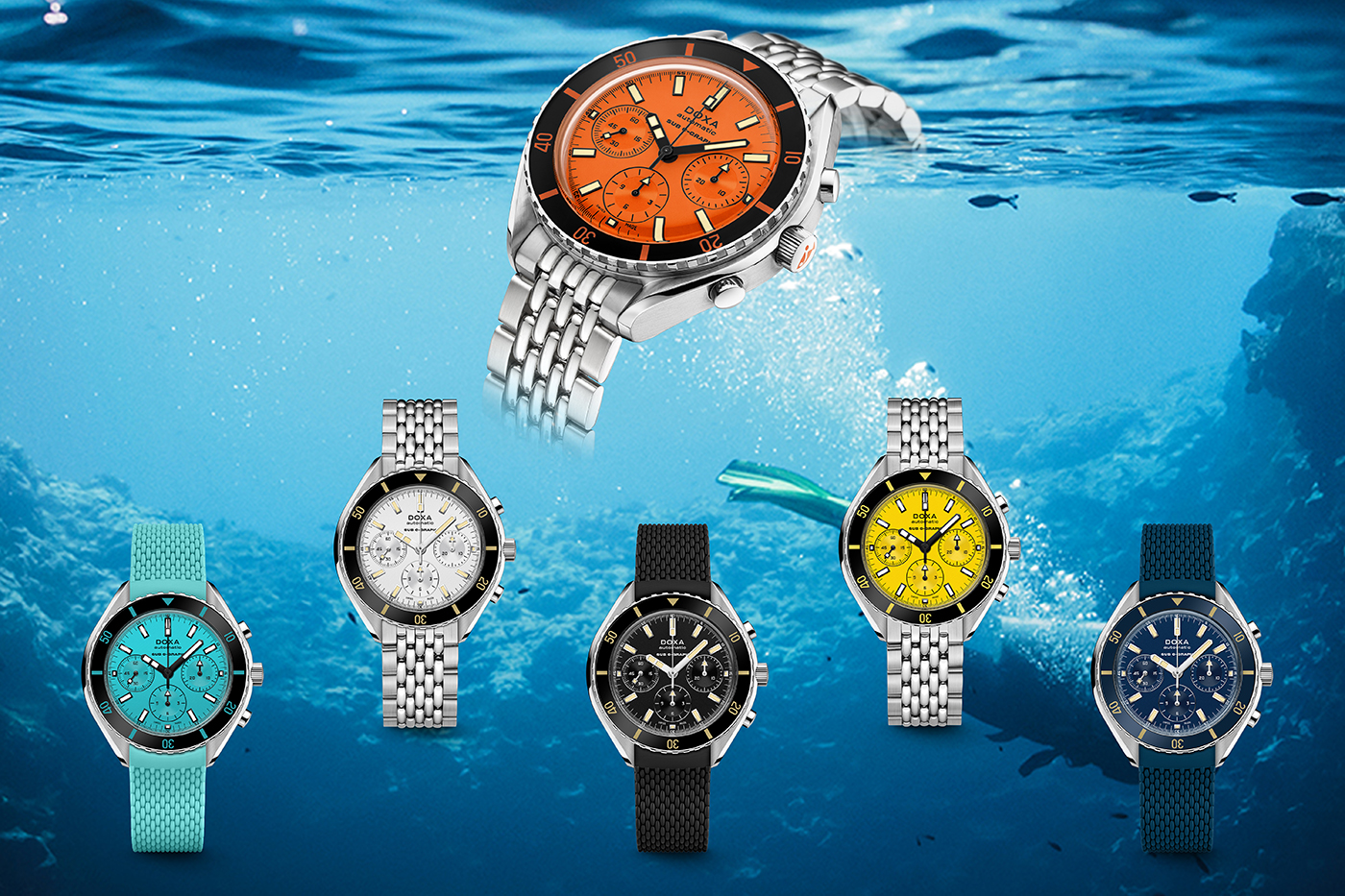 With much of the dive watch enthusiast community still buzzing about the original Sub 200 series, the release of the Doxa Sub 200 C-Graph is likely to attract sizable interest from diver aficionados and buyers alike. The Doxa Sub 200 C-Graph is available now through authorized dealers at a starting MSRP of 2,650 CHF. For more details, please visit the brand’s website.