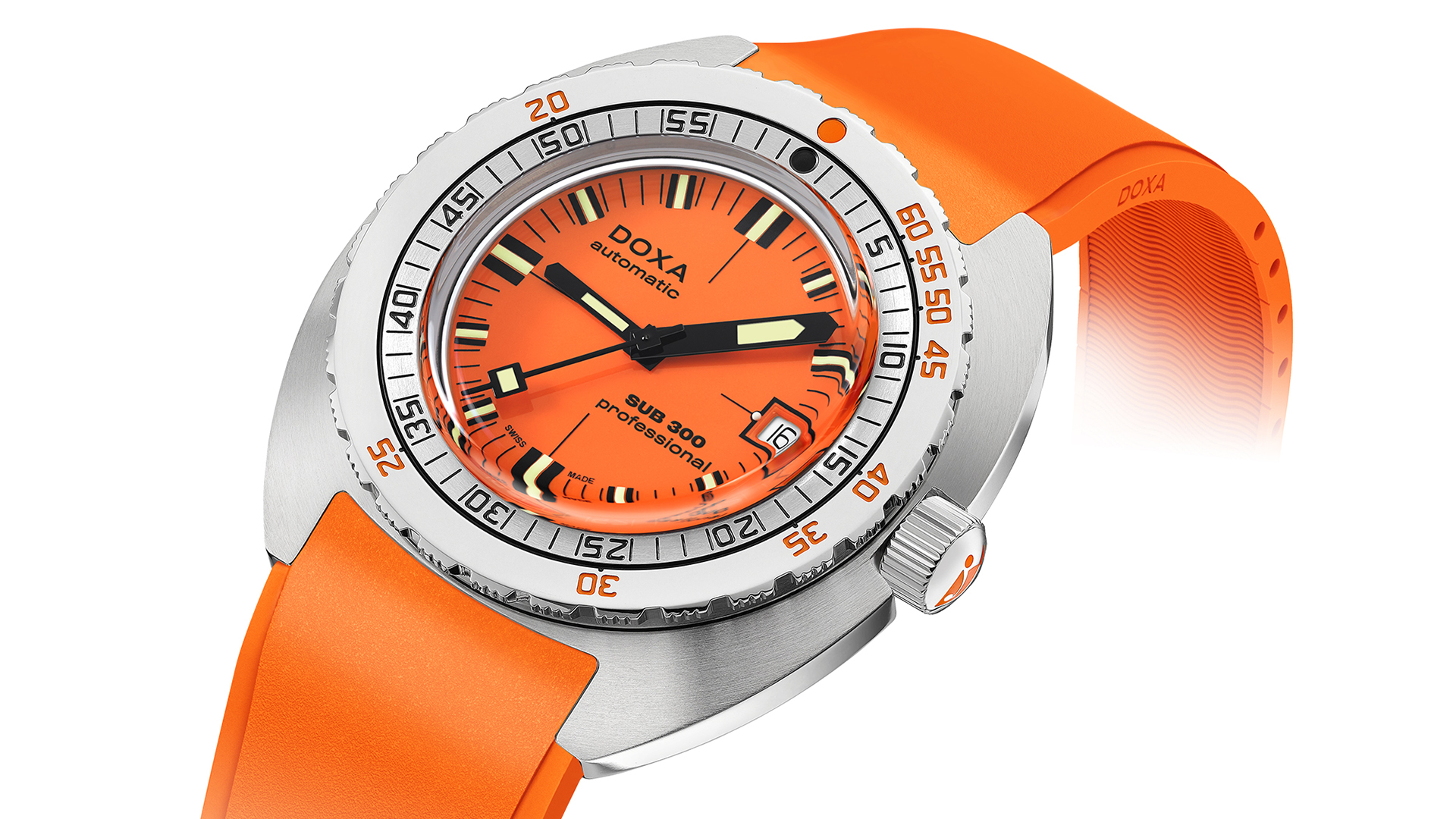 When the vast majority of enthusiasts think of Doxa, one single timepiece comes to mind – the beefy cushion case Sub 300 diver, especially in its orange dial Professional guise. With a legacy dating back to 1967 and a list of wearers including Jacques Cousteau and pulp novel action hero Dirk Pitt, the Sub 300 series has carved out an instantly recognizable niche for itself in the dive watch pantheon. It’s this iconic quality that can ironically be a hindrance to many brands, as a popular watch becomes caught between the brand’s desire to continue innovating with the line and the threat of public backlash if a classic line becomes “too different.” With that in mind, Doxa’s decision to revamp the Sub 300 line for 2020 is a difficult one, but the revised Sub 300 series rides this razor’s edge well while genuinely improving the product. While the new Doxa Sub 300 COSC series is instantly recognizable, the marque has incorporated a host of upgrades including revised case geometry, a chronometer rated movement, and the first colored rubber strap options ever offered in the Sub 300 line.

The changes to the stainless steel case of the Doxa Sub 300 COSC are subtle, almost imperceptible at first glance, the wearing experience is changed significantly. The 42.5mm case diameter is the same as before, wearing remarkably well on smaller wrists thanks to its compact 45mm lug to lug length. It’s the case thickness, however, where things start to shift. While still a reasonably thick watch at 13.4mm, the proportions have shifted around somewhat. Most notably, the flat polished case sides are dramatically slimmer than the previous Sub 300T series, helping the design to feel less blocky on the wrist while drawing visual attention back towards the tall box sapphire crystal. The Sub 300’s signature unidirectional decompression bezel is intact here, flanked by a signed crown with the orange Doxa fish emblem. Of course, it wouldn’t be a Doxa Sub without hefty water resistance, and the Sub 300 COSC delivers with a 300 meter depth rating. 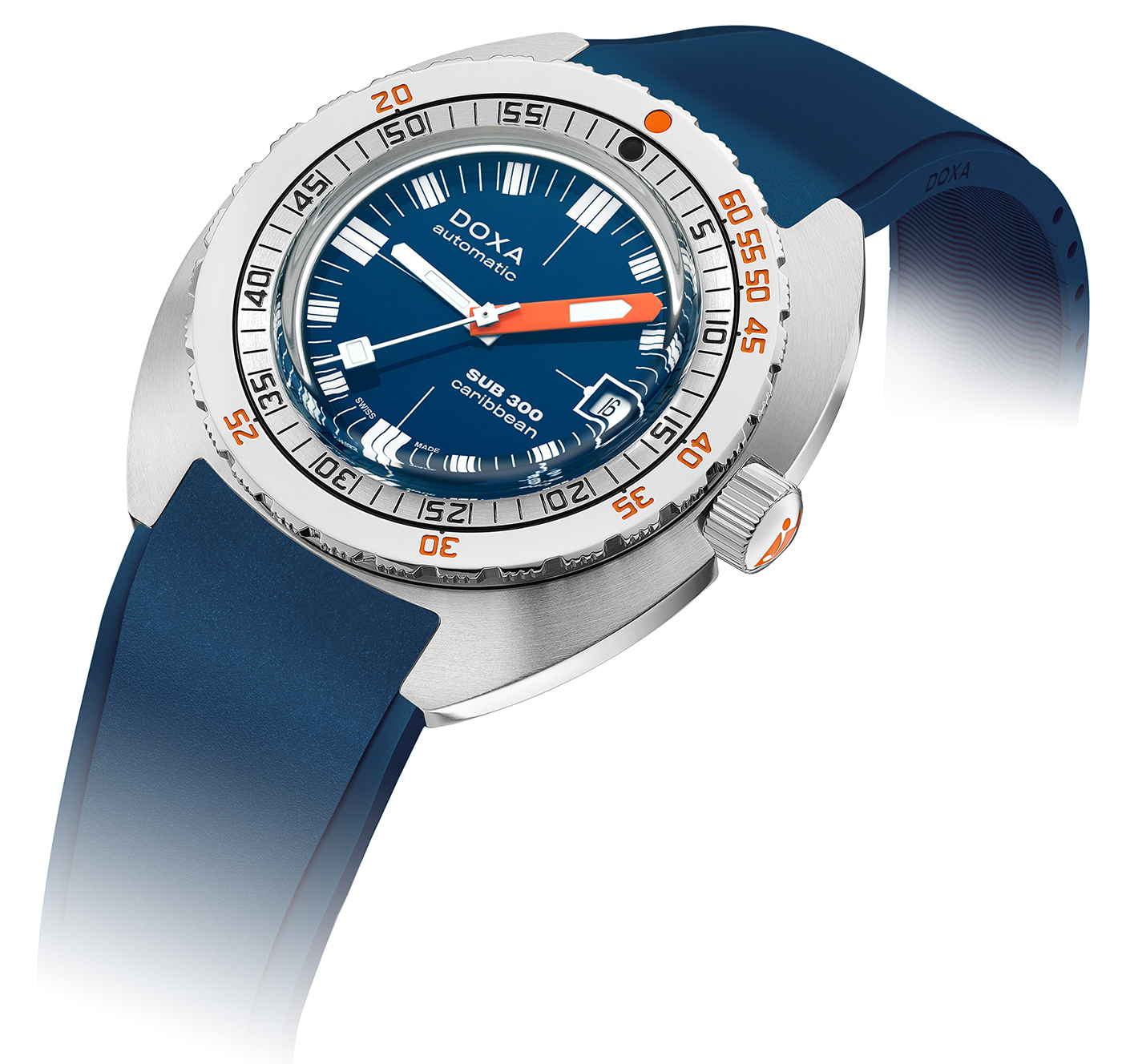 While the actual dial designs of the Doxa Sub 300 COSC series are unchanged from past versions, the variety of available colors is a major step forward for the brand’s modern lineup. The classic “non-T” Sub 300 series has only been available as a set of limited edition releases since 2015 exclusively in orange dial Professional, silver dial Searambler, and black dial Sharkhunter variants. The Sub 300 COSC, on the other hand, is a regular production series, and features all six of Doxa’s adventurously named dial colors. This includes the classic Professional, the Searambler, and the Sharkhunter, along with the navy blue Caribbean, the lemon yellow Divingstar, and the creatively titled Aquamarine in a light turquoise. While the distinctive disproportionate handset and square printed indices remain the same across the line, the use of color gives each variant a dramatically different character. Where the black dial Sharkhunter feels purposeful and almost brutally utilitarian, the bright and cheerful blue of the Aquamarine gives these same elements a casual, vacation ready vibe. 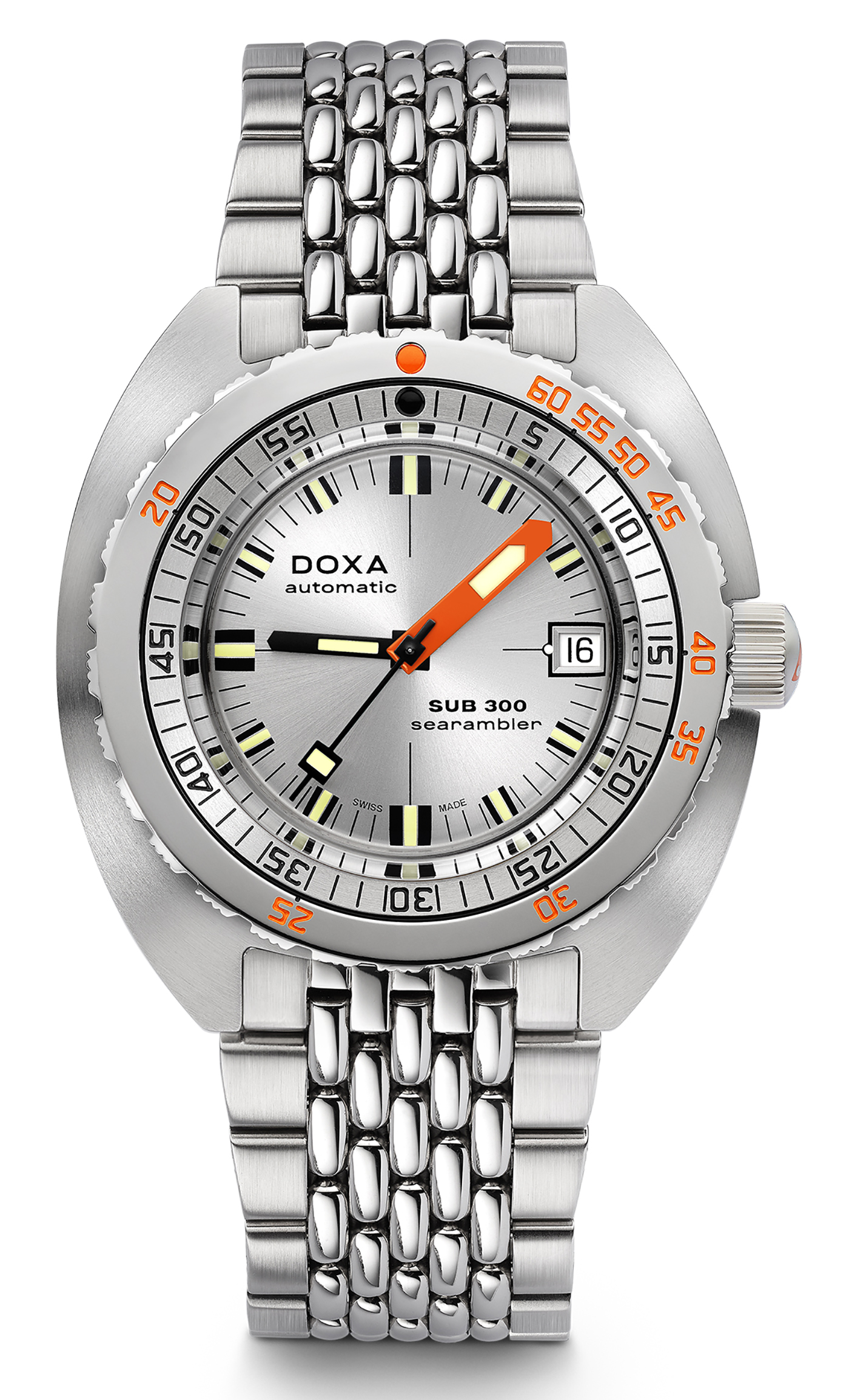 The improved movements inside the Sub 300 COSC are so important to the new line Doxa named the series after them. Inside each model in the line beats a deceptively humble ETA 2824-2 automatic movement. While this common caliber appears in a wide variety of timepieces Doxa has ensured these particular examples stand above the rest. In addition to brand specific decoration, each movement in the Sub 300 COSC series earns the coveted COSC chronometer rating for accuracy. Outside of the accuracy, these are statistically standard, with a 40 hour power reserve and a 28,800 bph beat rate. 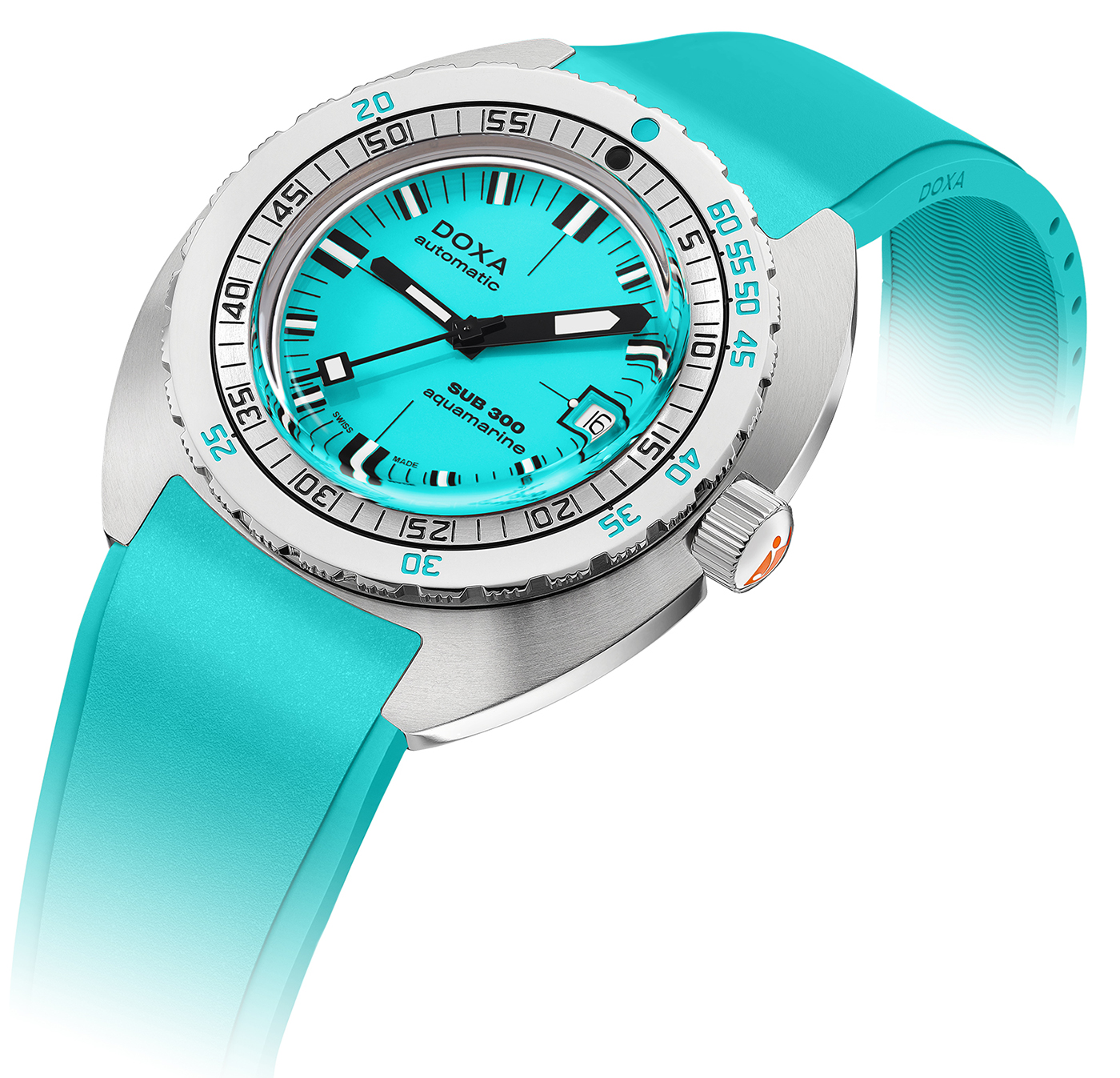 Doxa offers each of the six dial variants in the new Sub 300 COSC line with a pair of strap options. The first of these is the classic Doxa beads of rice bracelet, offering the classic 70’s diver look with a mix of mirror polished center links contrasted with brushed outer links, along with a diver’s extension. The second option is a brand new addition to the line. For the first time in the Sub 300’s 53 year history, Doxa is offering rubber straps in matching colors for each of the six dial variants. These integrated straps flow remarkably well into the cushion case shape, with the bold colors and streamlined form giving this classic shape a modern, sporty appeal. All six dial variants are also available with the black rubber strap for a slightly more subdued look. Finished with a deployant clasp, these rubber straps also incorporate a diver’s extension. 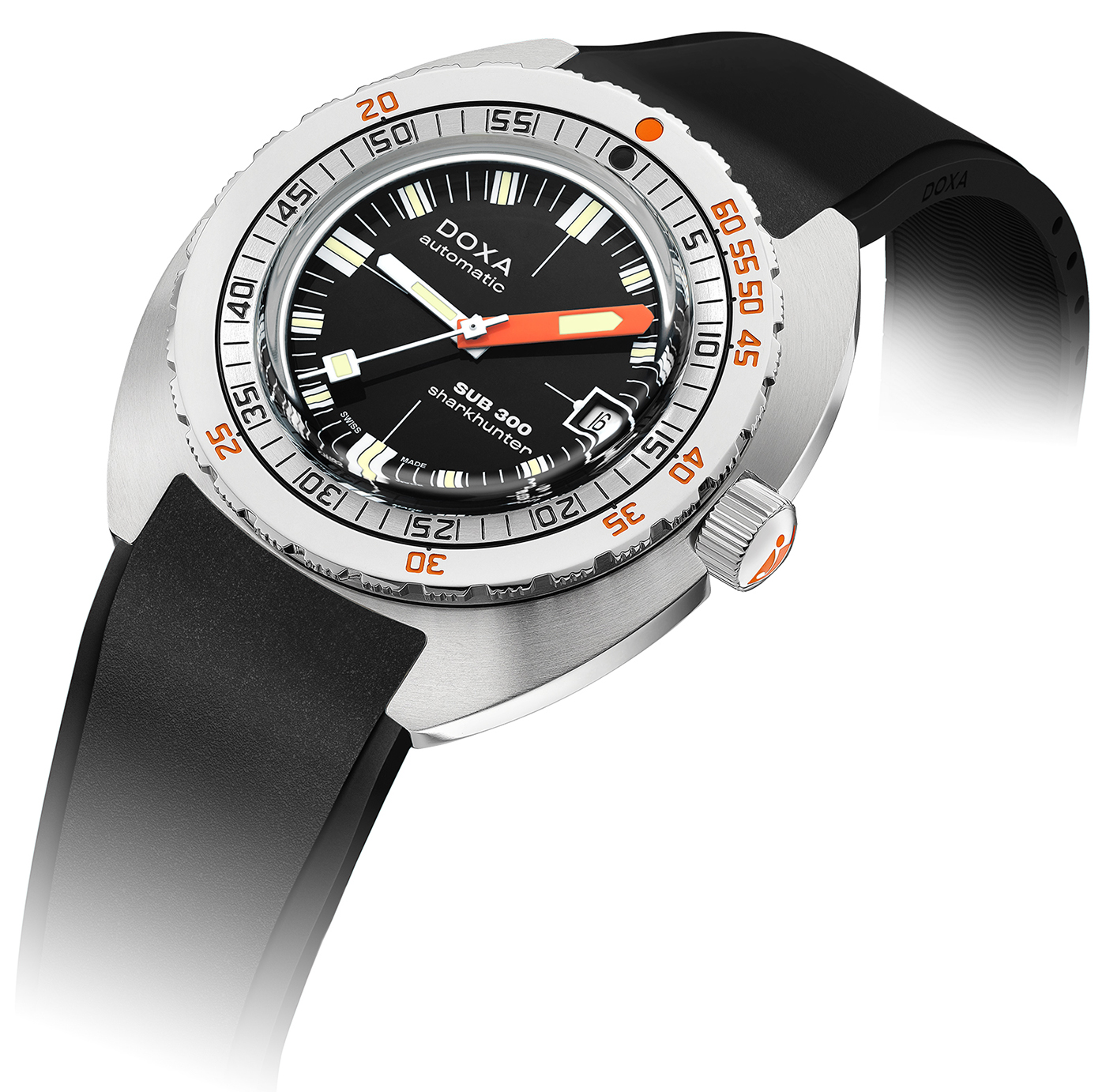 Without dramatically changing the core of the design, Doxa has substantially modernized the classic Sub 300 line with the new Sub 300 COSC series. The combination of minor tweaks to the shape, improved movement accuracy, and a focus on variety make this new lineup a surefire winner in Doxa’s focused dive watch landscape. All models in the new Doxa Sub 300 COSC series are available now from authorized dealers, with MSRP starting at $2,450. For more details, please visit the brand’s website.