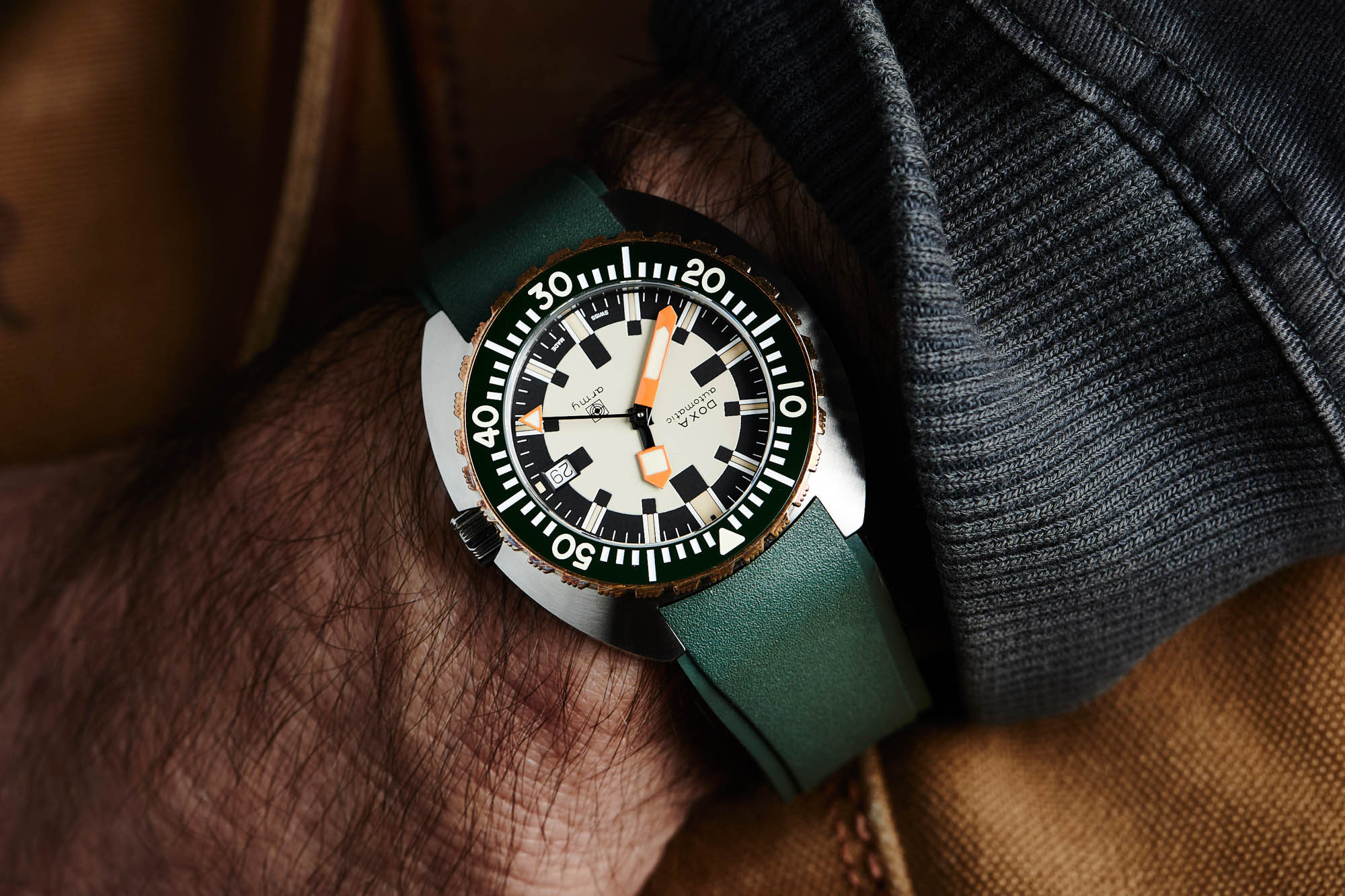 For years, the Doxa Army was a watch that remained shrouded in mystery; however, when the brand relaunched the model earlier this year in April 2022, it not only brought the cult-favorite timepiece to a lot of people’s attention for the first time, but it also helped confirm details and clarify discrepancies that had plagued collectors for years, such as why the examples in period photos appear black, while nearly all surviving examples are steel (it was due to a primitive black oxide coating that was prone to easily rubbing off and fading). Nearly all Doxa collectors were excited to see a modern recreation of a near-mythical, military-issued watch from the brand’s archives, yet Doxa chose to produce the watch as a limited edition of just 100 pieces, and all examples sold out immediately following its release. As soon as Doxa announced the limited edition of the Army, everyone knew that a non-limited edition would inevitably follow at some point, but the big question that still remained was how Doxa was going to release a standard-production version of the Army that still allowed the 100-piece limited edition model to remain unique and special. Well, the new unlimited Doxa Army watches have just been unveiled, and rather than being crafted from black ceramic like the original limited edition version, the standard catalog models appear in stainless steel and bring the option of a bronze and green bezel to the collection for the very first time. 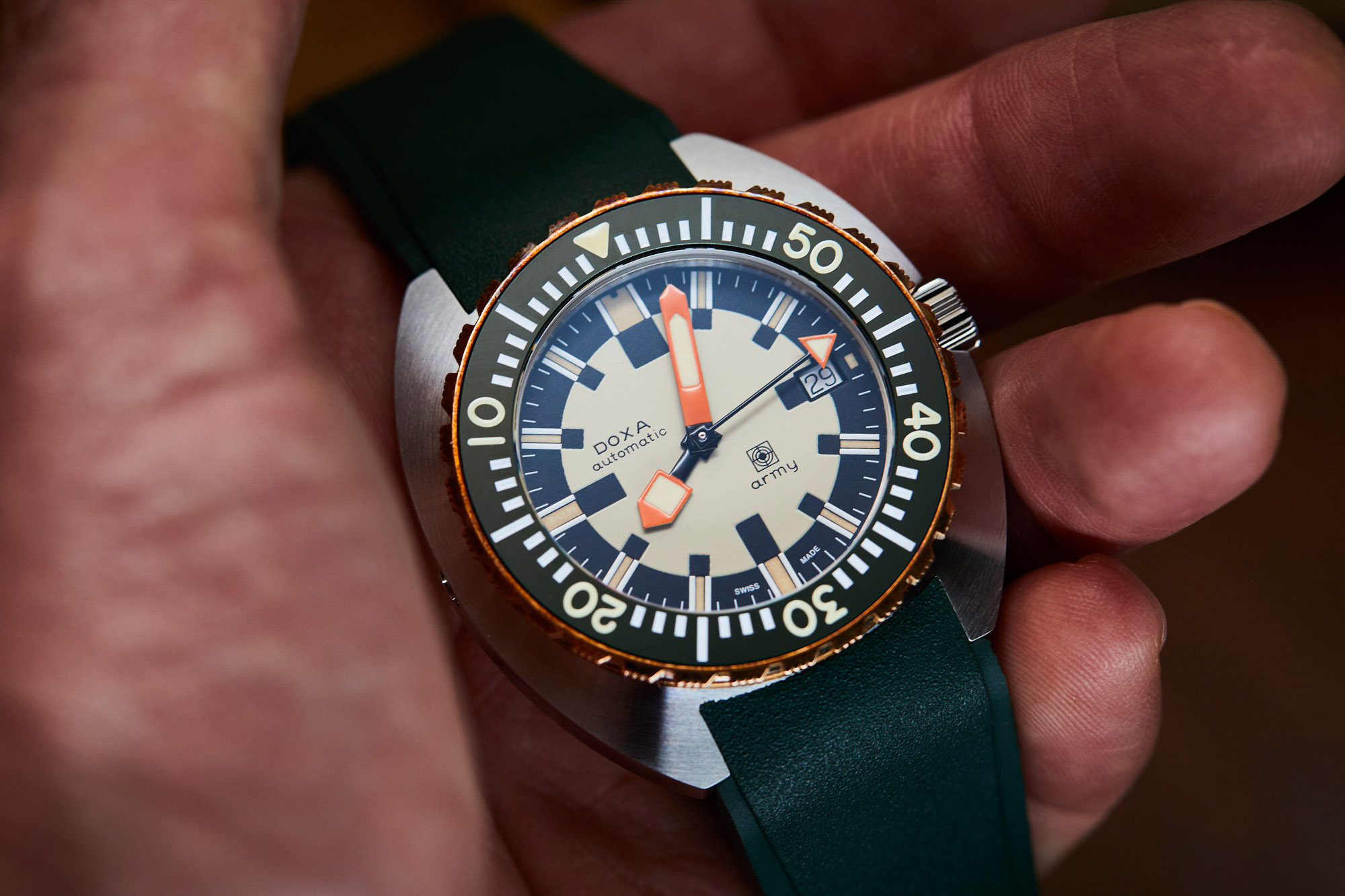 Even at a quick glance, the new Doxa Army watches look significantly different from the limited-edition model, simply due to the fact that their cases appear in brushed stainless steel rather than jet-black ceramic. That said, the actual physical design and proportions of the two watches are going to be virtually identical, and the stainless steel cushion-shaped cases of the new Doxa Army watches measure 42.5mm in diameter by 44.5mm lug-to-lug and 11.95mm in thickness. Solid stainless steel casebacks and screw-down crowns help guarantee a dive-ready 300 meters of water resistance, while flat sapphire crystals sit on top of the cases to protect the dials and hands. The key difference between the two new stainless steel Doxa Army models is in regards to their unidirectional rotating timing bezels. Both versions include fully-demarcated countdown scales; however, one features a bronze bezel ring with a green ceramic insert, while the other offers a more traditional design with a black ceramic insert mounted within a stainless steel outer ring. Completing the watch is either a stainless steel “beads of rice” bracelet or a FKM rubber strap, and buyers of the green version will also have the option of either black or green rubber when it comes to their strap. Both bracelet and strap options are fitted with folding clasps that feature wetsuit extensions and regardless of which version you choose, all of the new Doxa Army watches come with additional camouflage NATO straps along with special matching cases that feature the original camouflage pattern of the field uniforms worn by the Swiss Army. 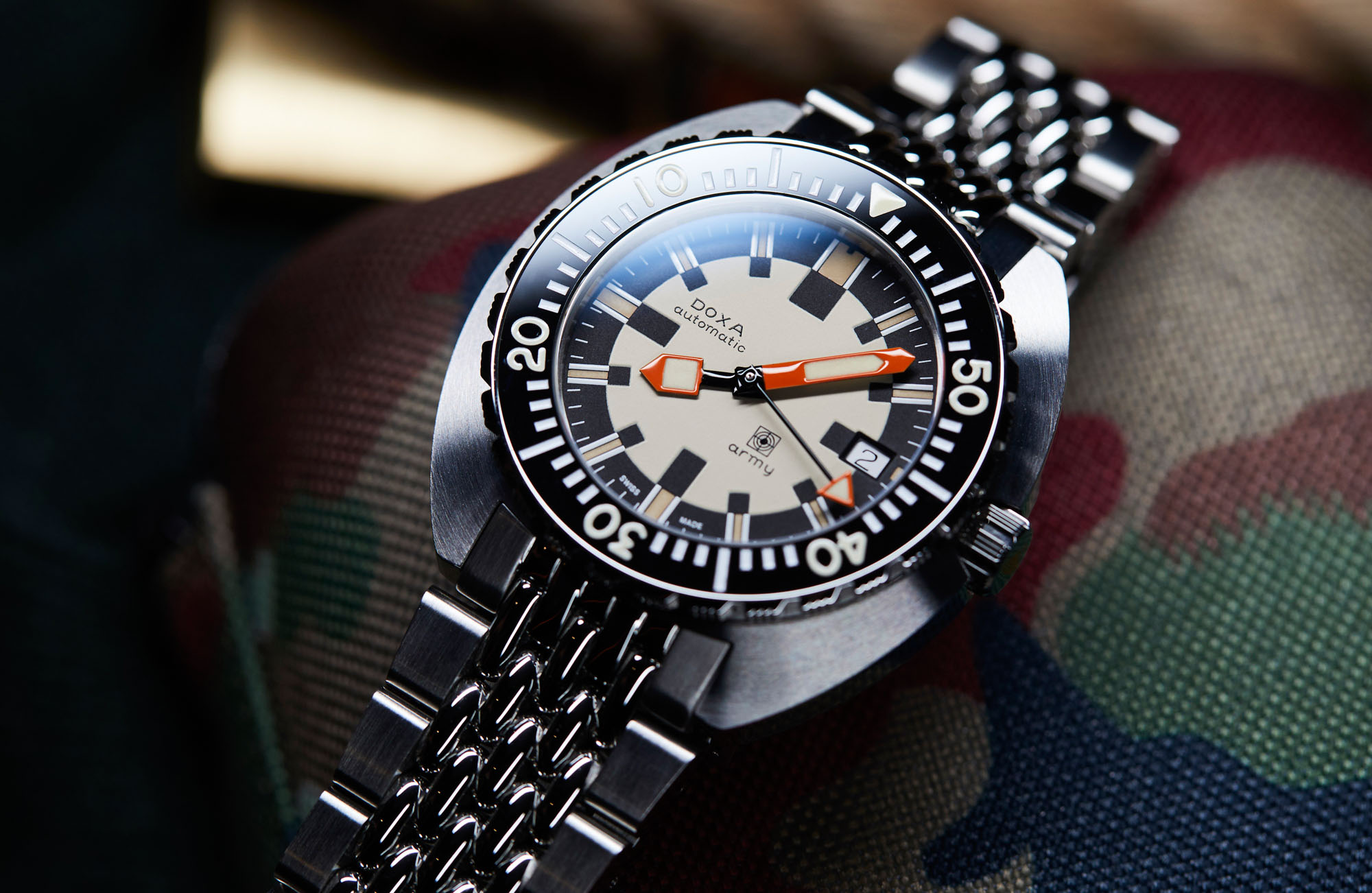 While the bezels and straps differ between models, the dials and hands fitted to the new stainless steel Doxa Army watches are all identical and feature sand-colored surfaces with bold black and white markings, along with date windows at the 3 o’clock location. Although the overall design of the dial is almost an exact recreation of the original military-issued version from the late 1960s (and is similarly identical to what you will find on the limited edition model with a black ceramic case), it offers an undeniably funky overall aesthetic and almost looks like it would be more at home on a racing chronograph from the following decade. Given that the case itself is largely what you get with the normal SUB 300 model, this unusual yet highly legible dial is likely the primary reason why someone would be interested in the Doxa Army over any other of the brand’s watches. The printed rectangular markings on the dial are complemented by a trio of orange and black centrally-mounted hands that pair Doxa’s signature minute hand with a  pentagon-shaped hour hand and a long, thin seconds hand fitted with an orange arrow-shaped tip. Just as you would expect from a watch built by a brand primarily known for its world-class divers, all three of the hands on the Doxa Army are finished with Super-LumiNova for a highly luminous display, while the ten-minute markings on the countdown bezel also glow in the dark. 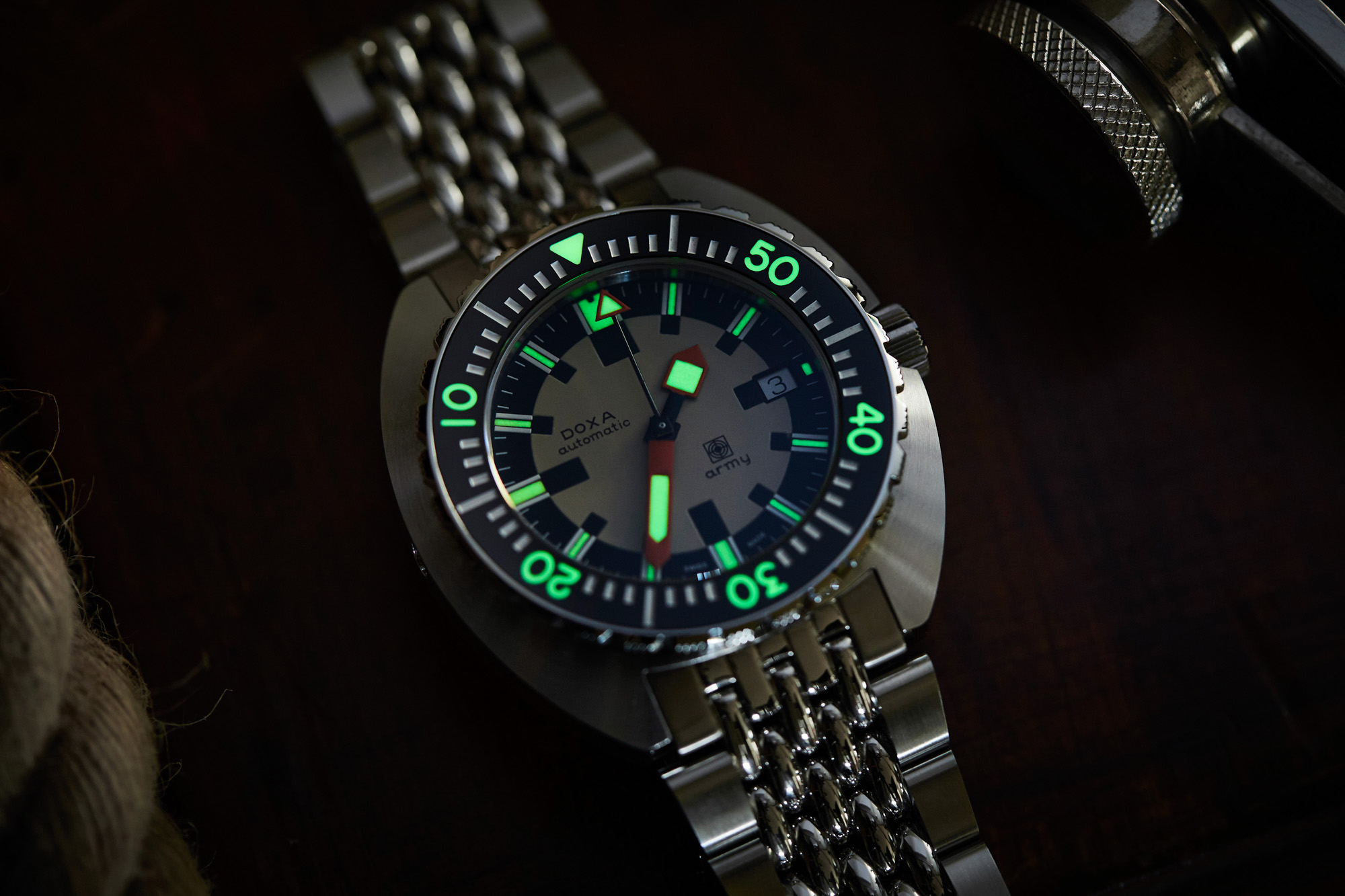 Like many other Doxa models, the new stainless steel Army watches are powered by the tried-and-true ETA 2824 automatic movement. Although the version fitted to the Doxa Army does receive a Doxa-decorated rotor, the ETA 2824 is very much a known quantity and is arguably the single most commonly used mechanical movement in the Swiss watch industry. With an operating frequency of 28,800vph and a power reserve of approximately 38 hours, there is truly nothing all that noteworthy or unexpected about the ETA 2824, but that is certainly not a bad thing when it comes to the criteria of what you actually want in a purpose-built tool watch. No in-house movement means no headache or red tape when it comes to repairs and service, and while you don’t get a lengthy power reserve or bragging rights like you do with many in-house calibers, you do get reliable and consistent performance that is currently proving itself inside countless other watches throughout the industry 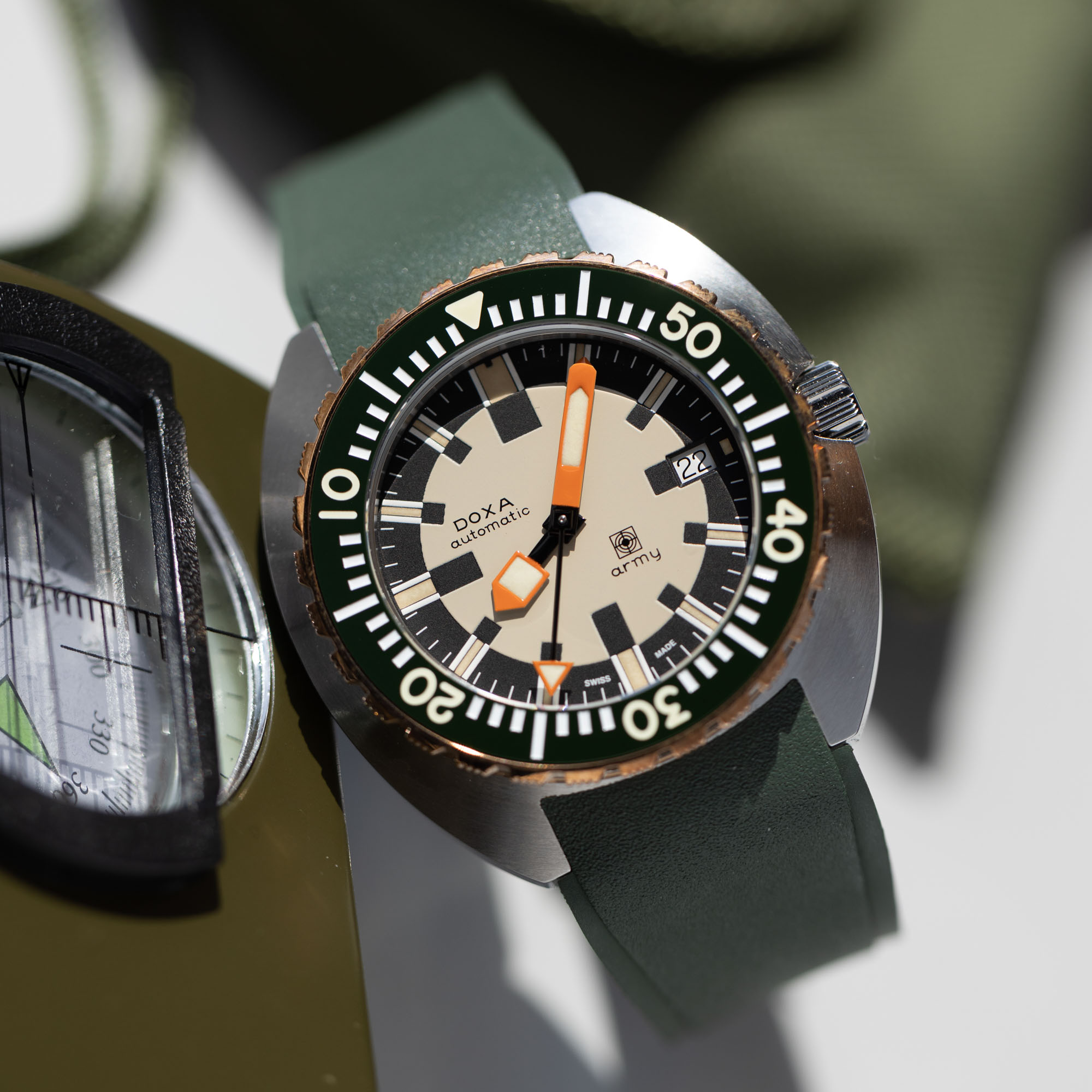 While the vintage Doxa Military watches with actual military-issued provenance are significantly more expensive than a standard Doxa diver from the same era, the new stainless steel Doxa Army models are only priced a few hundred dollars more than what the brand charges for a standard SUB 300T. The version with a black insert and stainless steel bezel ring is accompanied by an official retail price of $2,090 USD on a bracelet or $2,050 USD with a rubber strap, while the model fitted with a bronze bezel and green insert is priced at $2,290 USD on a bracelet or $2,250 USD with either of the rubber strap options. Additionally, the green bezel version represents the first time that Doxa has ever featured the material bronze on one of its models, and given that the new stainless steel watches are all standard-production additions to the brand’s catalog, anyone who wants a Doxa Army should now finally be able to get their hands on one. For more information, please visit the brand’s website.