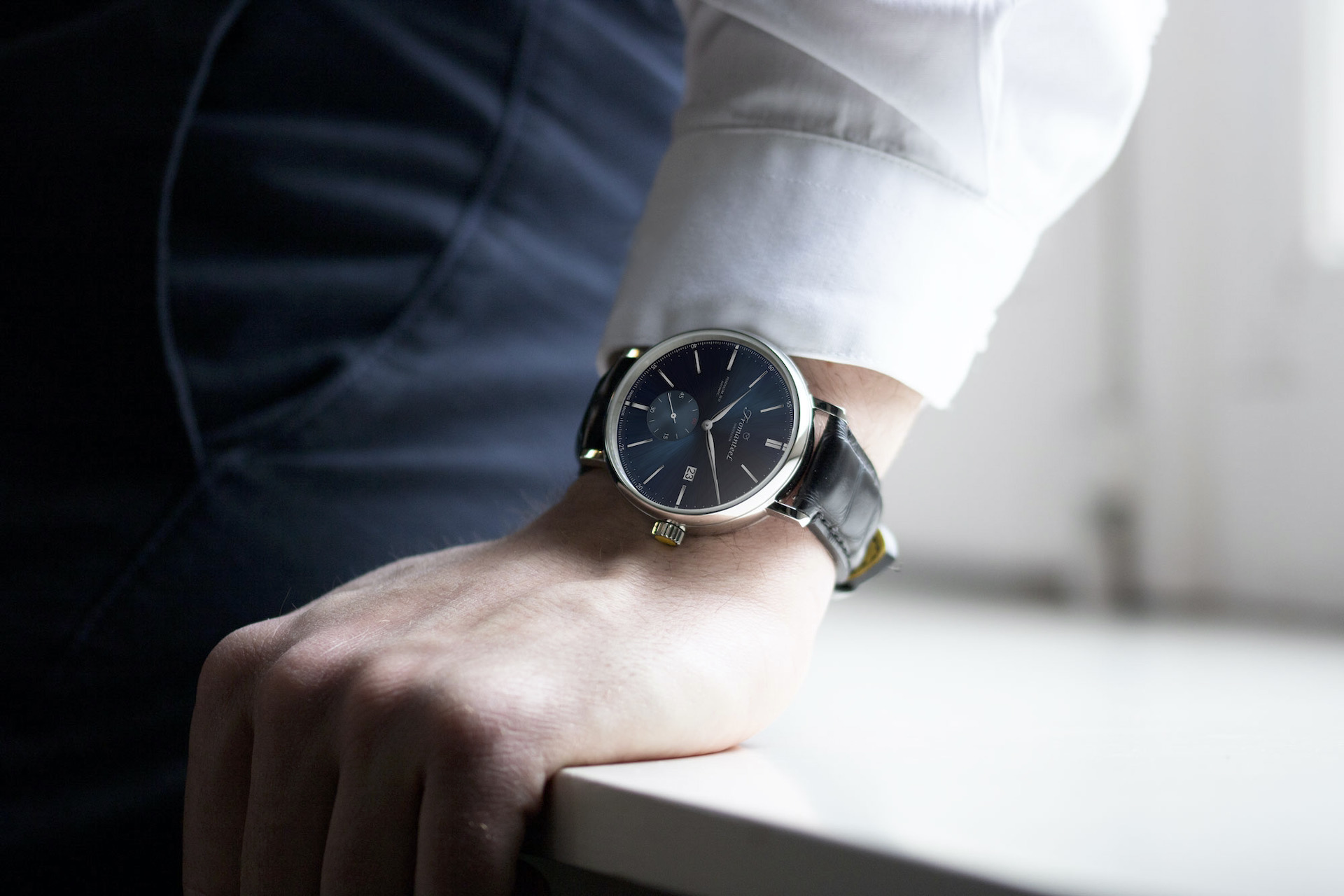 Escape Into The .BLU With Fromanteel’s Latest Collection

Designed in the beating heart of Amsterdam and crafted in the tranquil shadow of the Swiss Jura Mountains, Fromanteel watches combine a unique Dutch design language with legendary Swiss artisanship. In Fromanteel’s newest collection, named “.BLU,” the brand has created a line of watches designed to help you escape the distractions of the fast-paced digital world and to reconnect with the slower analog pace of life. Available now for pre-order only, the .BLU collection offers exceptional value across the line, from the affordable quartz-powered bicompax chronograph to the impeccably crafted Swiss automatic three-hander and chronograph. 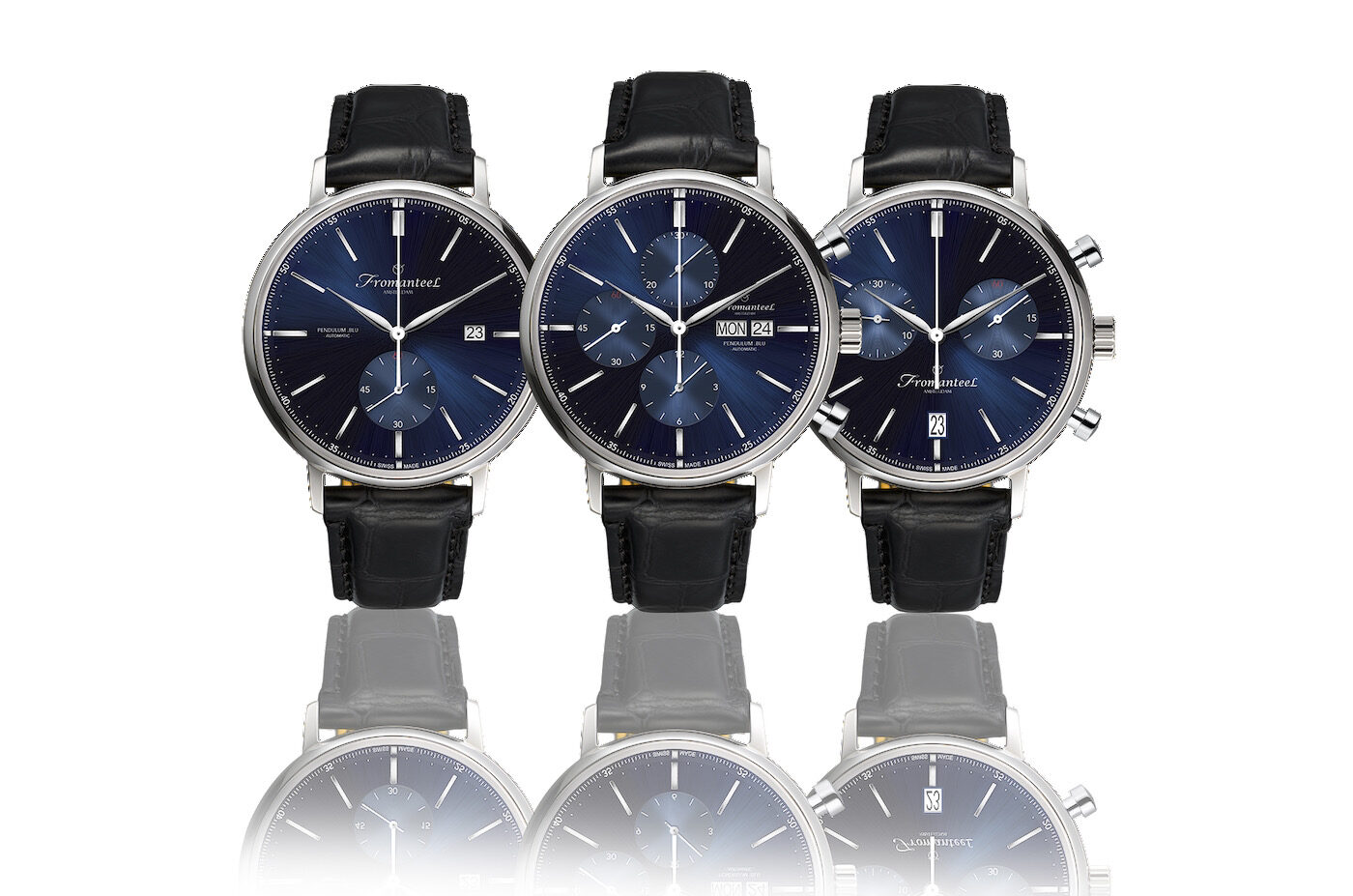 Though the Swiss and English tend to receive the lion’s share of accolades when it comes to horological innovation, the Dutch have their own storied history. Indeed, it was the Dutch inventor Christaan Huygens who originally invented the pendulum clock in the 17th century. Shortly after, famed Dutch clockmaker Ahasuerus Fromanteel and his son John began to implement the revolutionary pendulum mechanism into their standing clocks — an innovation that brought the clockmakers international renown. The next few decades saw the brand thrive in the ownership of the Fromanteel family until the company finally ceased operations in 1722. 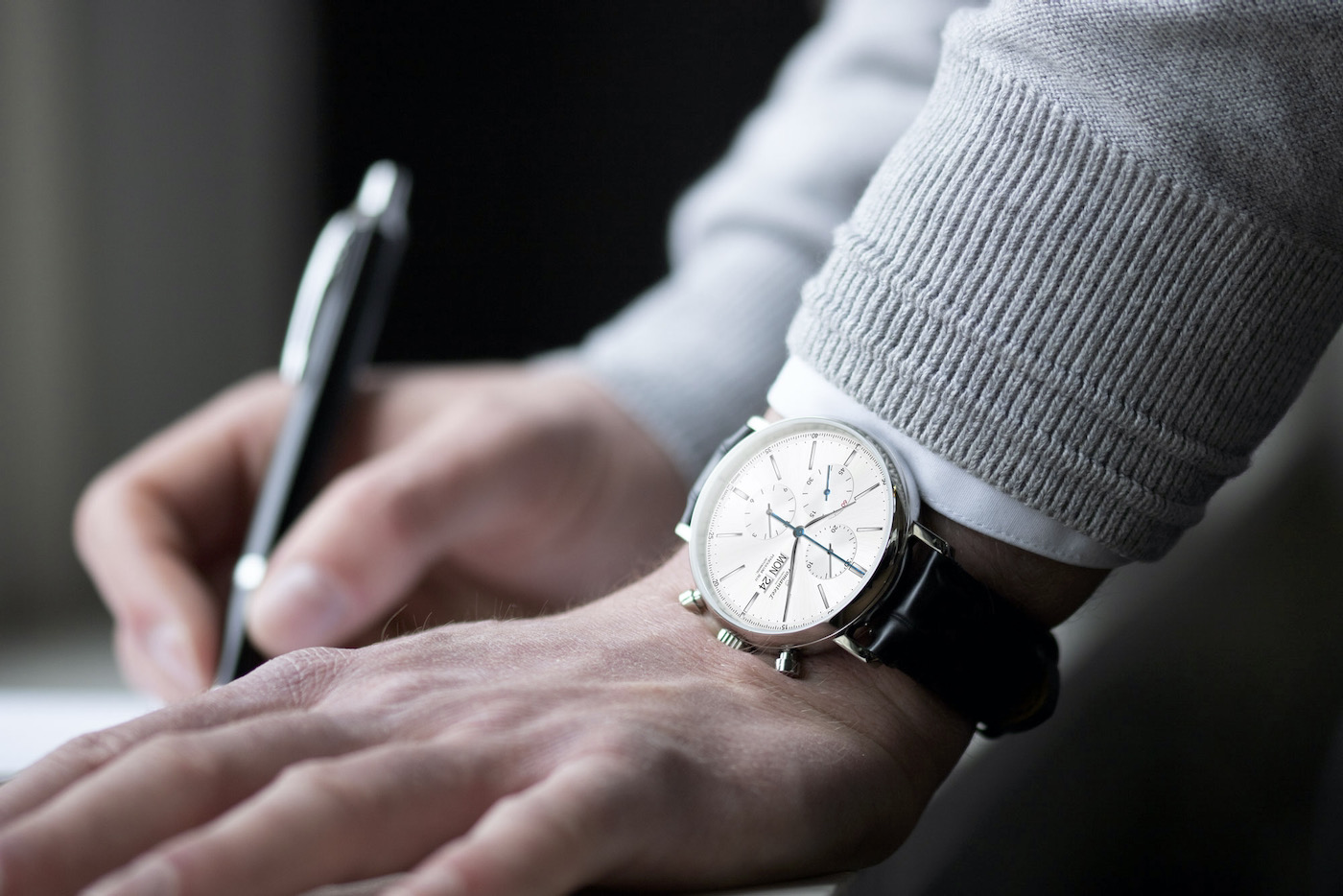 In 2009, when Dutch entrepreneurs and long-time friends Martjin van Hassel and Alfredo Silva decided to start a watch company, it was only fitting that they pay homage to the illustrious clockmakers that brought Dutch horology international acclaim. For more than a decade now, Fromanteel has grown its brand and crafted its own unique identity, all while paying proper tribute to Amsterdam’s rich history in horology. 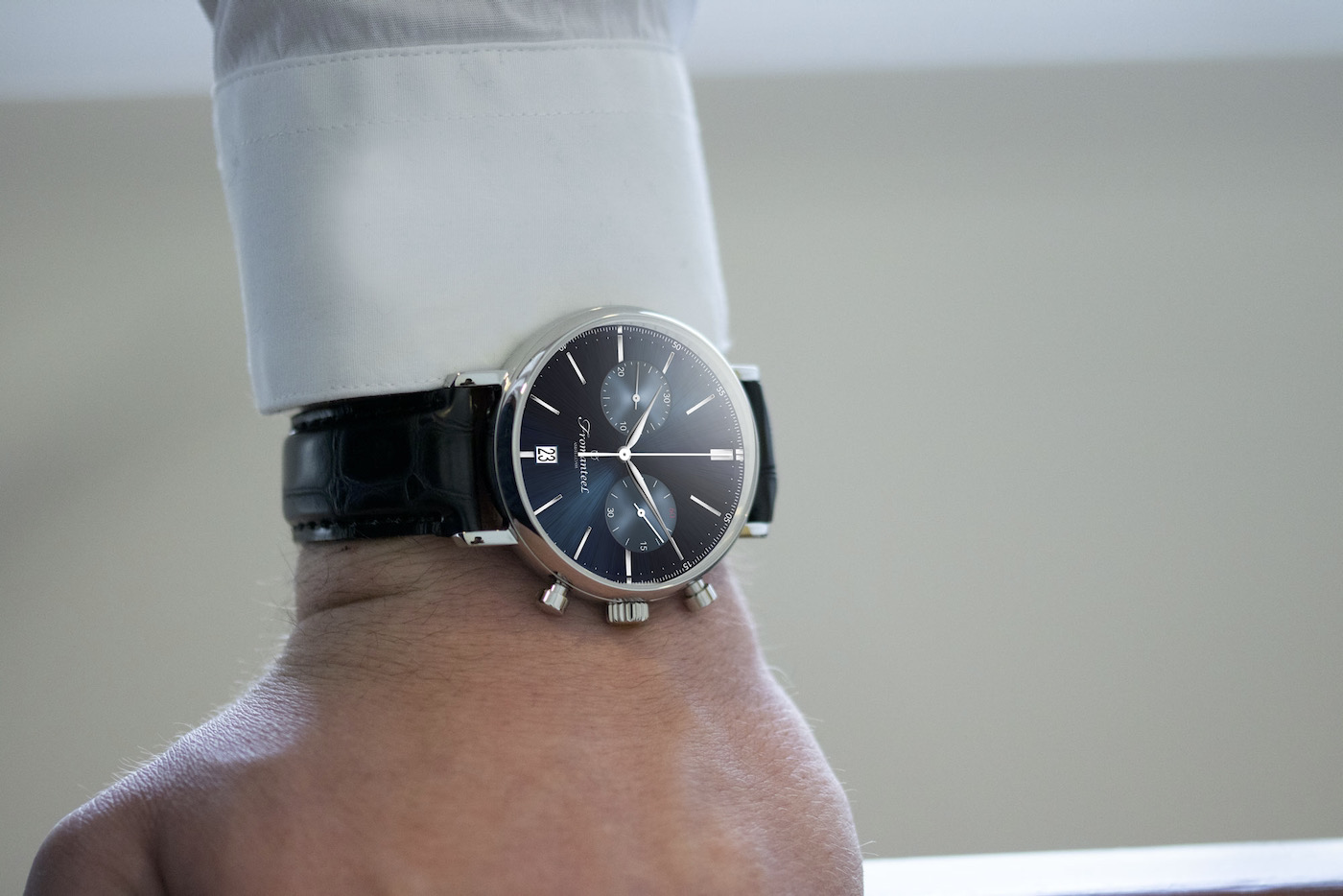 Why .BLU? From the name to the color, everything about the new collection is designed as an antidote to the rapid pace of modern life and the deluge of digital information. Fromanteel disrupts this constant flow of information by the period at the start of .BLU. The period offers a time to pause, a time to reflect before moving on. After the pause, Fromanteel introduces the color of calm: blue. As a cheeky touch, the “e” is left out, a reminder that not all parts of life must be dominated by the electronic world. No surprise, then, that all .BLU collection products feature that color of serenity, either on the dial or hands. 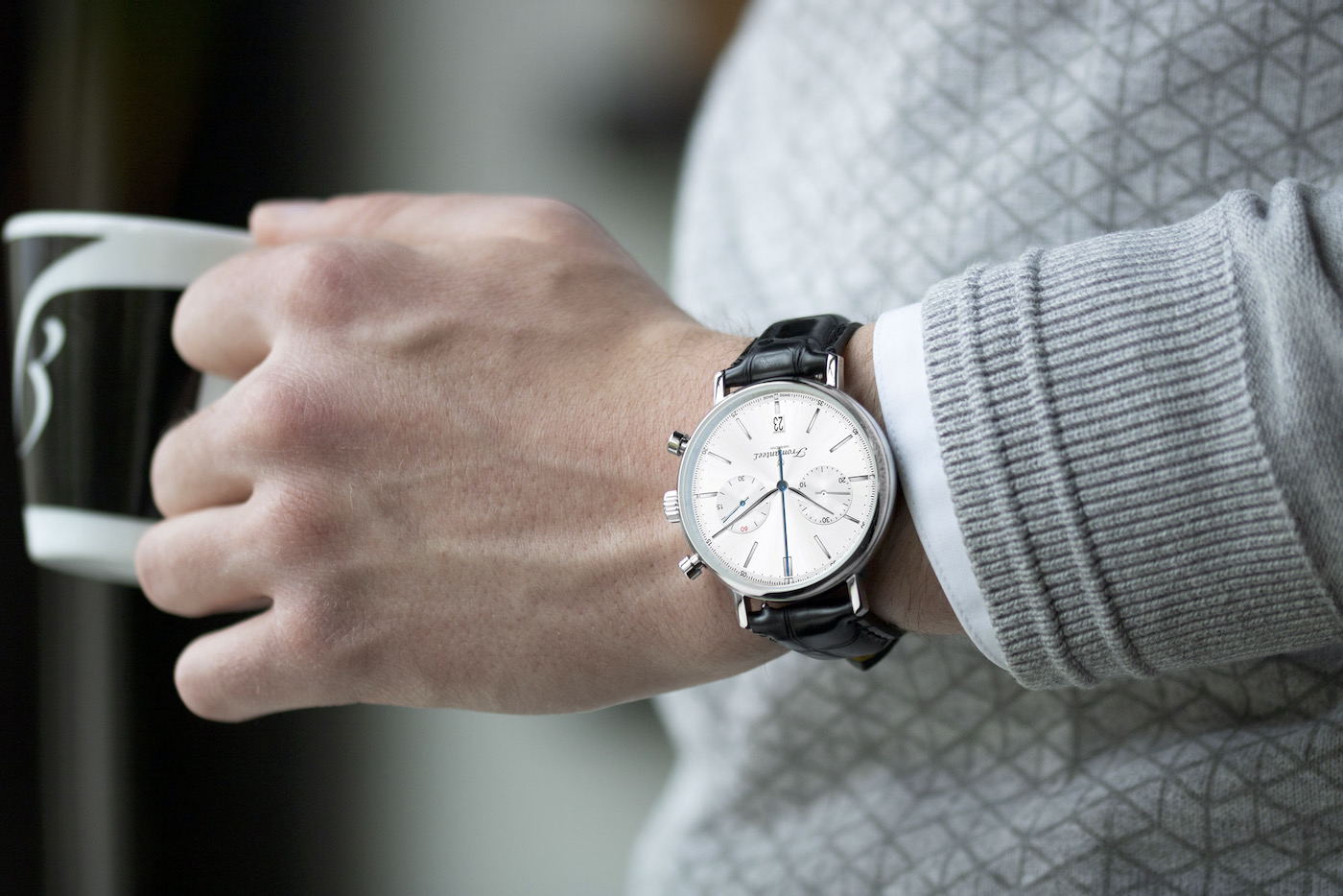 Starting off the collection is the most accessible watch in the line, the Chrono .BLU. Available at a starting pre-order price of only €449 incl. VAT (€600 retail), the Chrono .BLU is a quartz-powered bicompax chronograph that features a running seconds counter and 30-minute register, both raised off-axis, perched between 2-3 and 9-10 o’clock, respectively. It’s a small touch, but one that gives the Chrono .BLU a unique personality, especially when paired with the brand’s logo above the date at 6 o’clock. The Chrono .BLU is available in either a deep sunburst blue dial or white dial with blued hands. Whichever color you choose, both exude a sense of unhurried calm. The quartz movement in the Chrono .BLU allows for a slim case height of only 10.36mm that will easily slip under a cuff. The 42mm diameter offers plenty of wrist presence while remaining comfortable and versatile, especially when paired with a 20mm black leather strap. 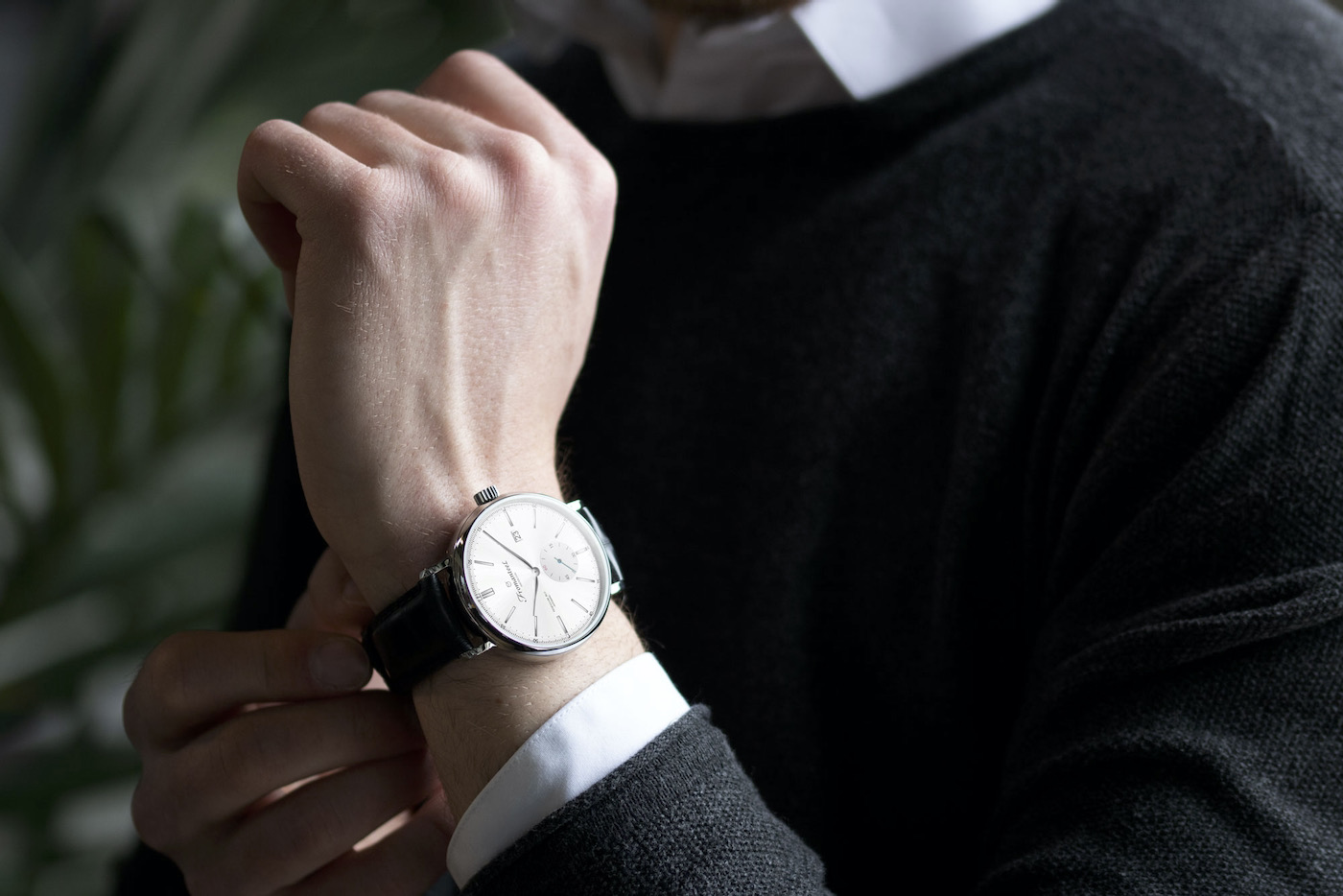 Up next in the collection is the Pendulum .BLU — a classically styled automatic timepiece that features either the line’s signature deep sunburst blue dial or a white dial with blued hands. In a timeless touch, Fromanteel has opted for a sub-seconds dial above 6 o’clock. Yet, timeless certainly does not mean staid; the Pendulum .BLU adds a sporty touch with a red 60 on the sub-seconds, along with Arabic five-minute markers. The Pendulum .BLU is powered by the Swiss Made Sellita SW-261 Mini-Sweep automatic movement. Like its sibling movement, the Sellita SW-200, the SW-261 is a tried-and-trusted movement. The automatic-winding movement beats at 28.8kbph, features 31 jewels, hacking seconds, a date function, and a 41-hour power reserve. Like the other watches in the collection, the Fromanteel Pendulum .BLU features a 42mm stainless-steel case and a sapphire crystal. And, of course, the crown is capped with Fromanteel’s signature yellow. The Pendulum .BLU is available on pre-order now at a starting price of €999 incl. VAT, with a final suggested retail price of €1500. 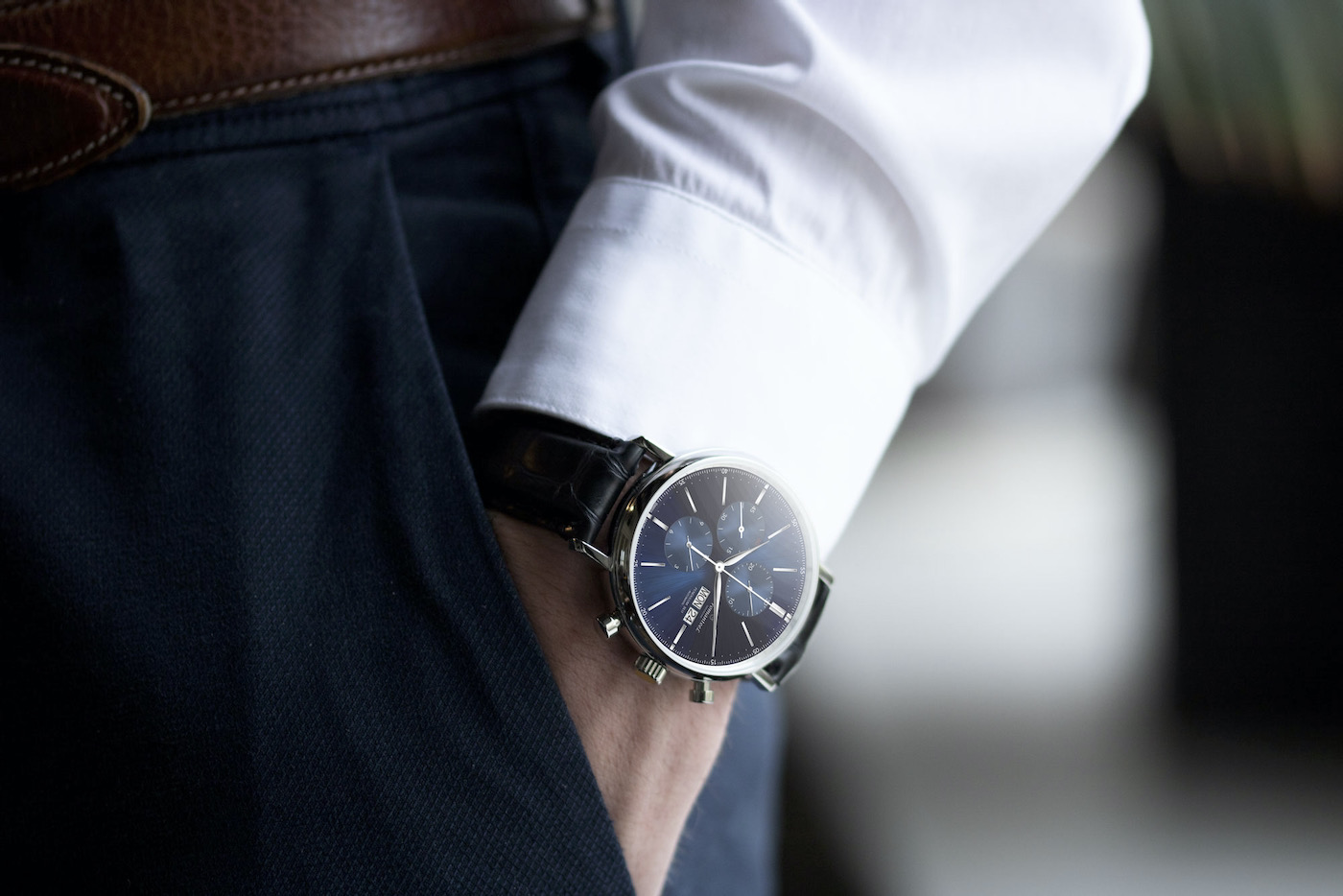 Rounding out the new .BLU collection is the Pendulum .BLU Chrono. The Pendulum .BLU Chrono is certainly the standout piece in the collection. A classic three-register chronograph, the Pendulum .BLU Chrono is powered by the Swiss Made Sellita SW-500a automatic chronograph movement, featuring an impressive power reserve of 62-hours. Available with either a blue or white dial, the Pendulum .BLU Chrono combines elegance and functionality, with day and date at 3 o’clock, running seconds at 9 o’clock, a 30-minute register at 12 o’clock, and 12-hour register at 6 o’clock. Despite its impressive specs and gorgeous finishing, the Chrono .BLU is available on pre-order starting price of €1999 incl. VAT (€2500 retail). Fromanteel’s pre-order campaign for the .BLU collection will run until the end of the year, with shipments and delivery expected in late 2021. Order now as the pre-order prices will increase over time. For more information on Fromanteel watches and the .BLU line, be sure to visit the brand’s website.