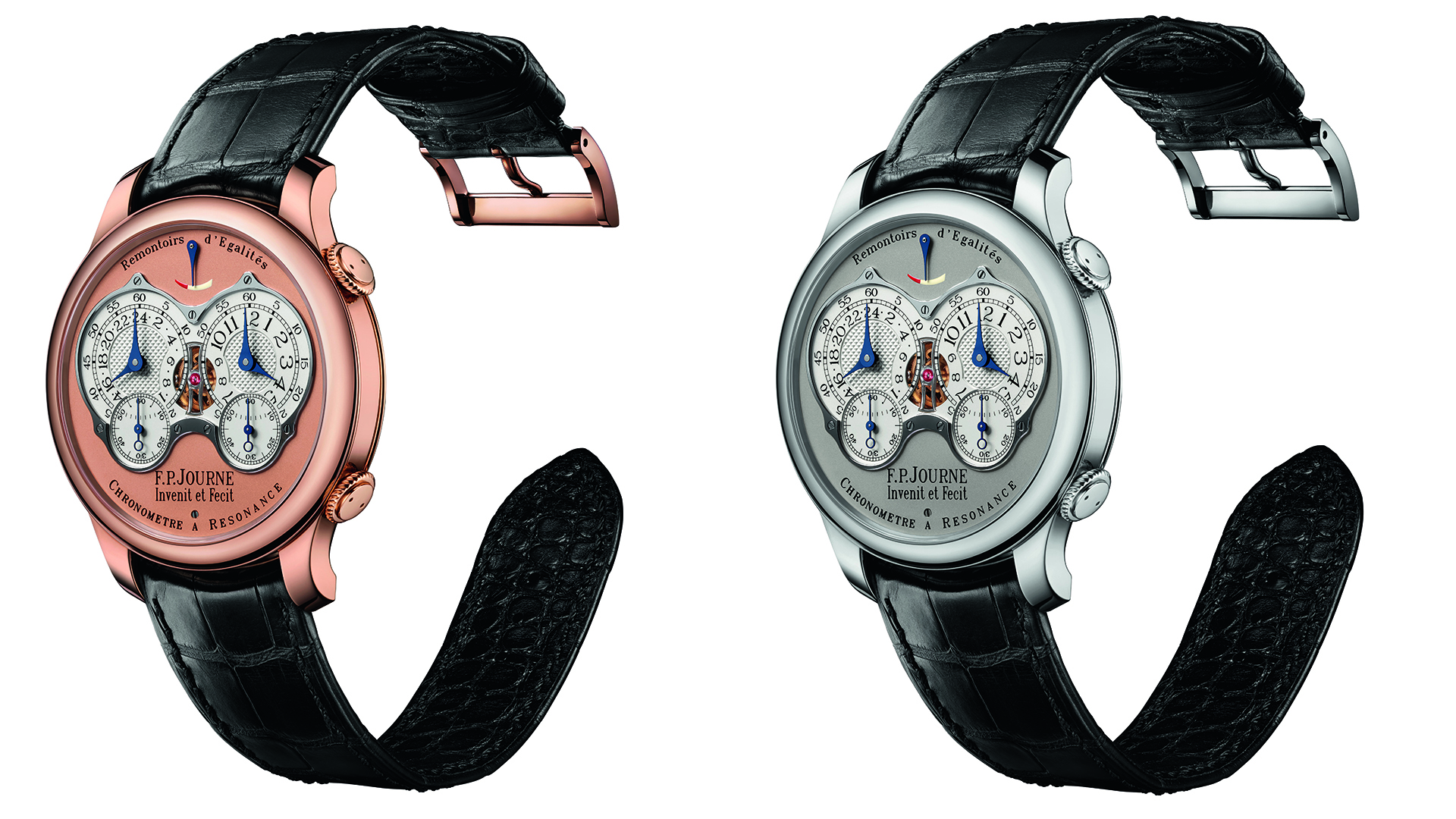 Although the brand is surprisingly young by haute horlogerie standards at only 21 years old, F.P. Journe has already established a handful of signature offerings that have earned their place in the enthusiast consciousness. Of these, perhaps none is more impressive than the F.P. Journe Chronomètre à Résonance, first introduced to the collection in 2000. For the line’s 20th anniversary, the brand has extensively reworked the Chronomètre à Résonance with a new movement, new case design, and a slightly modified face that keeps the distinctive spirit of the original alive. 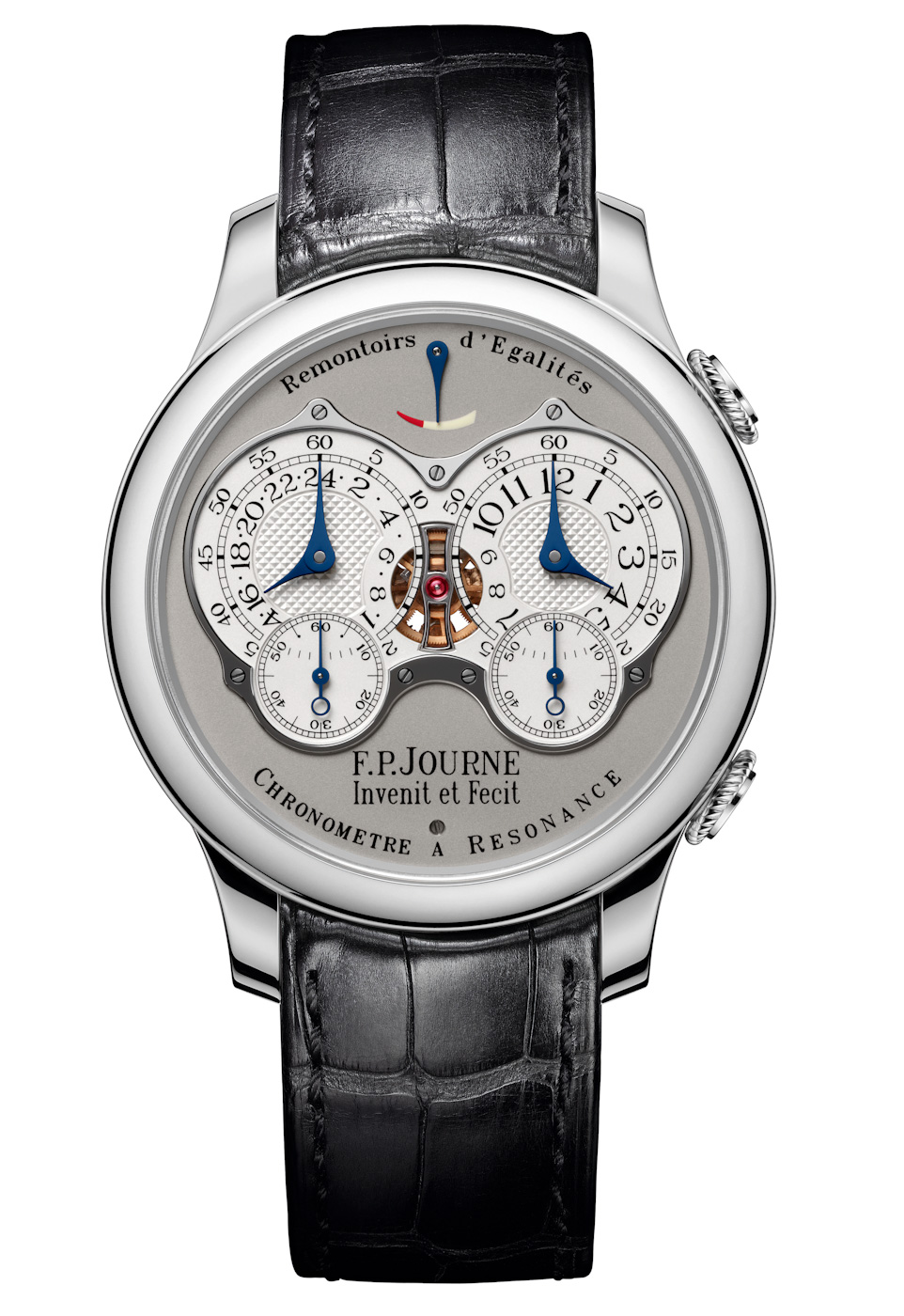 F.P. Journe offers several options for the case of the Chronomètre à Résonance, with both platinum and 18k 6N rose gold versions available in either a 40mm or 42mm diameter. The case shape itself is elegant, classical, and surprisingly thin for such a complicated piece at 11mm thick. The other major visual hallmark of the Chronomètre à Résonance’s case is the pair of thin crowns at 2 and 4 o’clock. While the 2 o’clock crown handles manual winding and time adjustment for both main dials, the 4 o’clock crown serves a single purpose — resetting both independent small seconds subdials to zero simultaneously when pulled out. 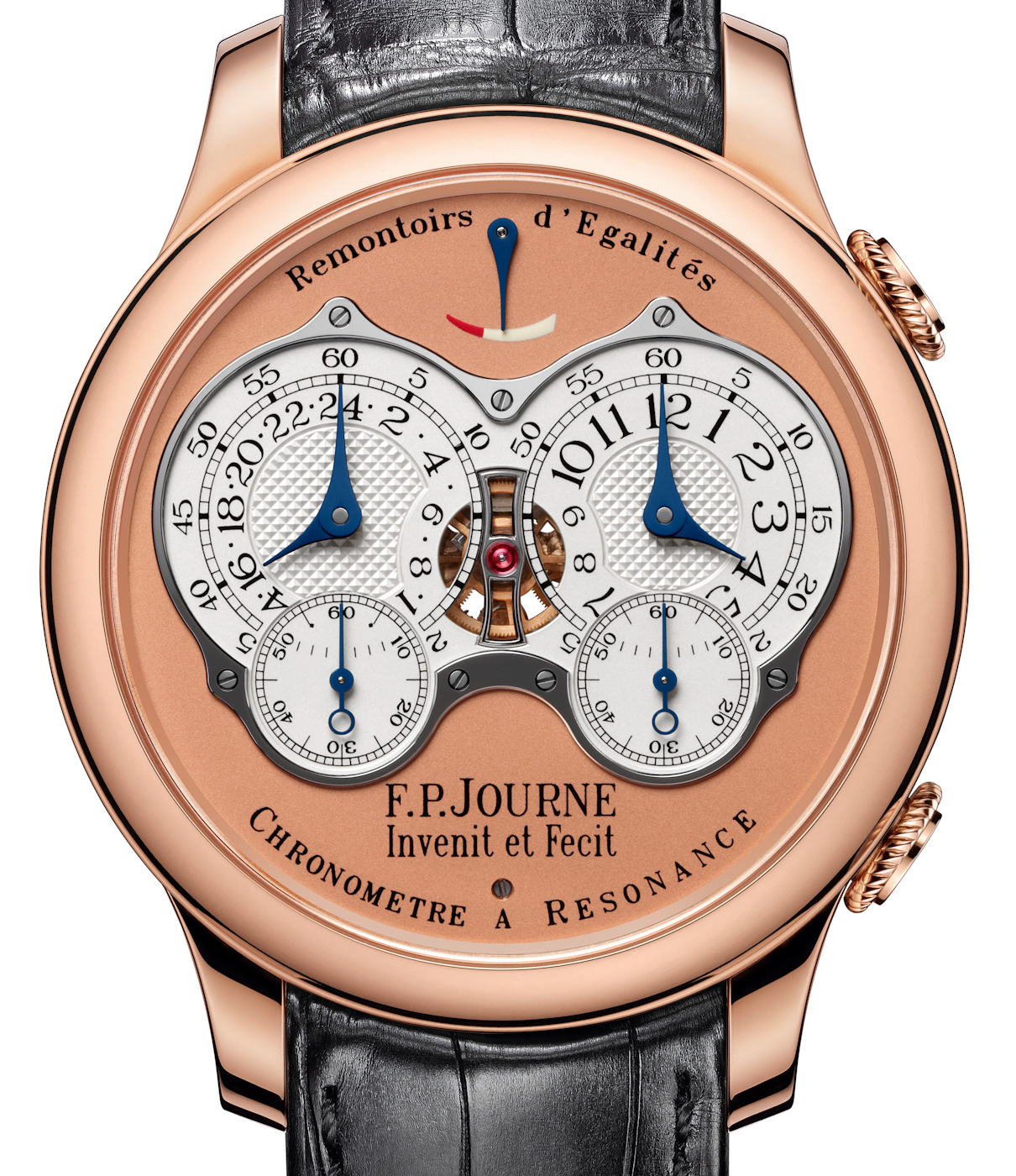 The new Chronomètre à Résonance models maintain the classic dual symmetry of the original while adding a few modernized touches. In true F.P. Journe style, even the seemingly simple outer surface surrounding the timekeeping dials is executed to the utmost level, made in either 18k white or red gold with a matte surface. The twin guilloché timekeeping dials are made in white finished silver and accented with the brand’s distinctive blued handset. In between the 24 hour dial on the left and the 12-hour dial on the right sits a first for the Chronomètre à Résonance and an extremely unusual device in watchmaking — a differential (more on that in a bit.) The Chronomètre à Résonance’s power reserve indicator has also been reworked over previous models, now sitting squarely above both dials at 12 o’clock for a more balanced look. 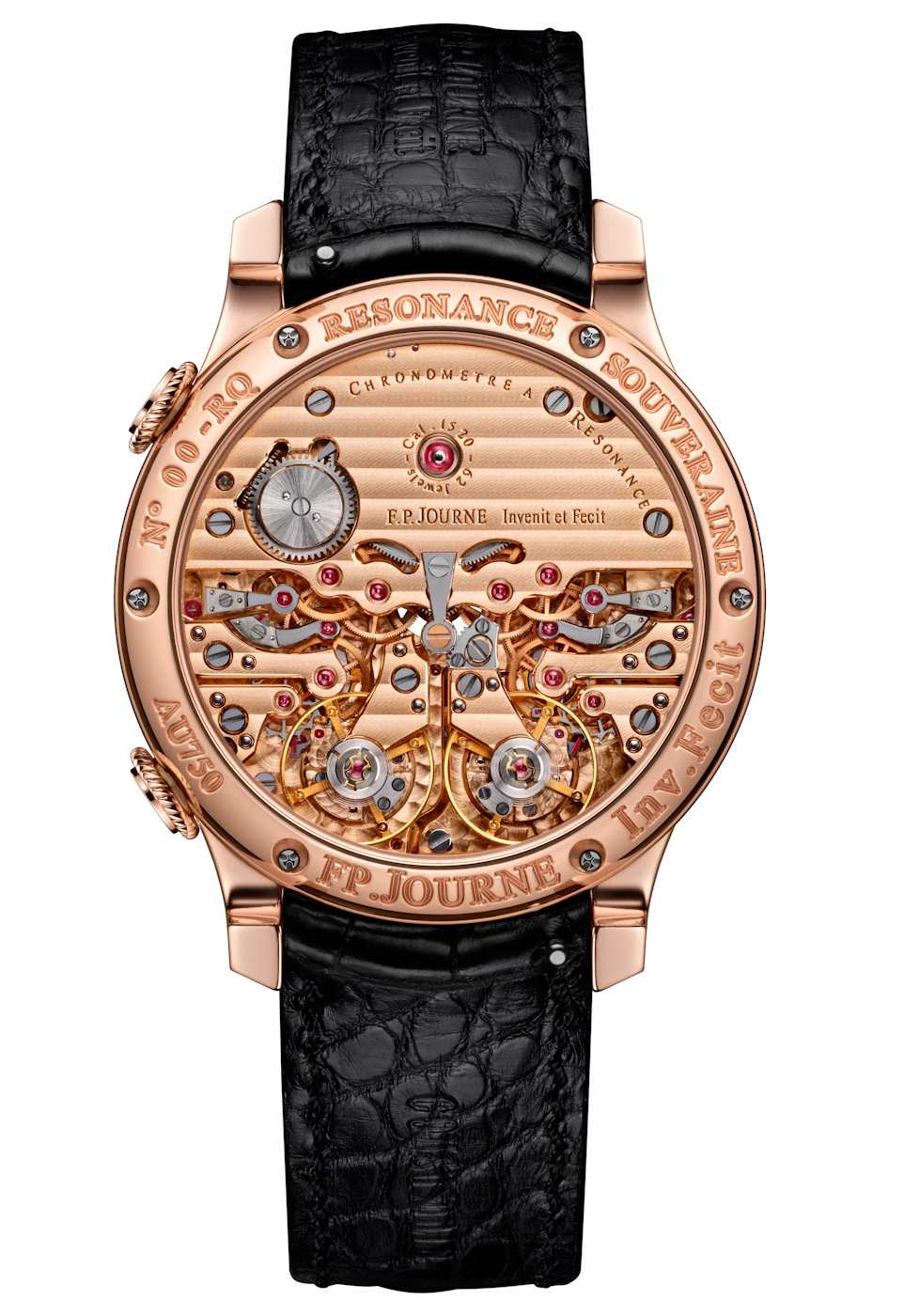 Just from glancing at the dial, it’s easy to see that the movement of these new Chronomètre à Résonance models is something special, and the all-new in-house rose gold Caliber 1520 movement certainly delivers on that front. For those unfamiliar with the resonance concept, essentially the idea behind the movements in F.P. Journe’s Chronomètre à Résonance models uses the phenomenon of frequency resonance in order to maintain synchronicity between two balances, allowing them to beat in perfect unison. In theory, this kind of resonance can be made to happen between any two vibrating objects with the same natural frequency, from swinging pendulums to a singer using their voice to resonate and shatter glass. In practice, this is extremely difficult to set up between two oscillating watch balances, requiring both to be in close proximity of one another at all times and regulated to exacting accuracy standards in order for resonance to begin. While the proximity problem can be solved by simply housing both balances in the same case connected by plates and bridges, F.P. Journe independently regulates each to within five seconds per day of one another to ensure resonance. As an added measure of accuracy, each of these balances is also fitted with its own remontoir d’égalite to ensure smooth torque delivery irrespective of the current amount of reserve power. 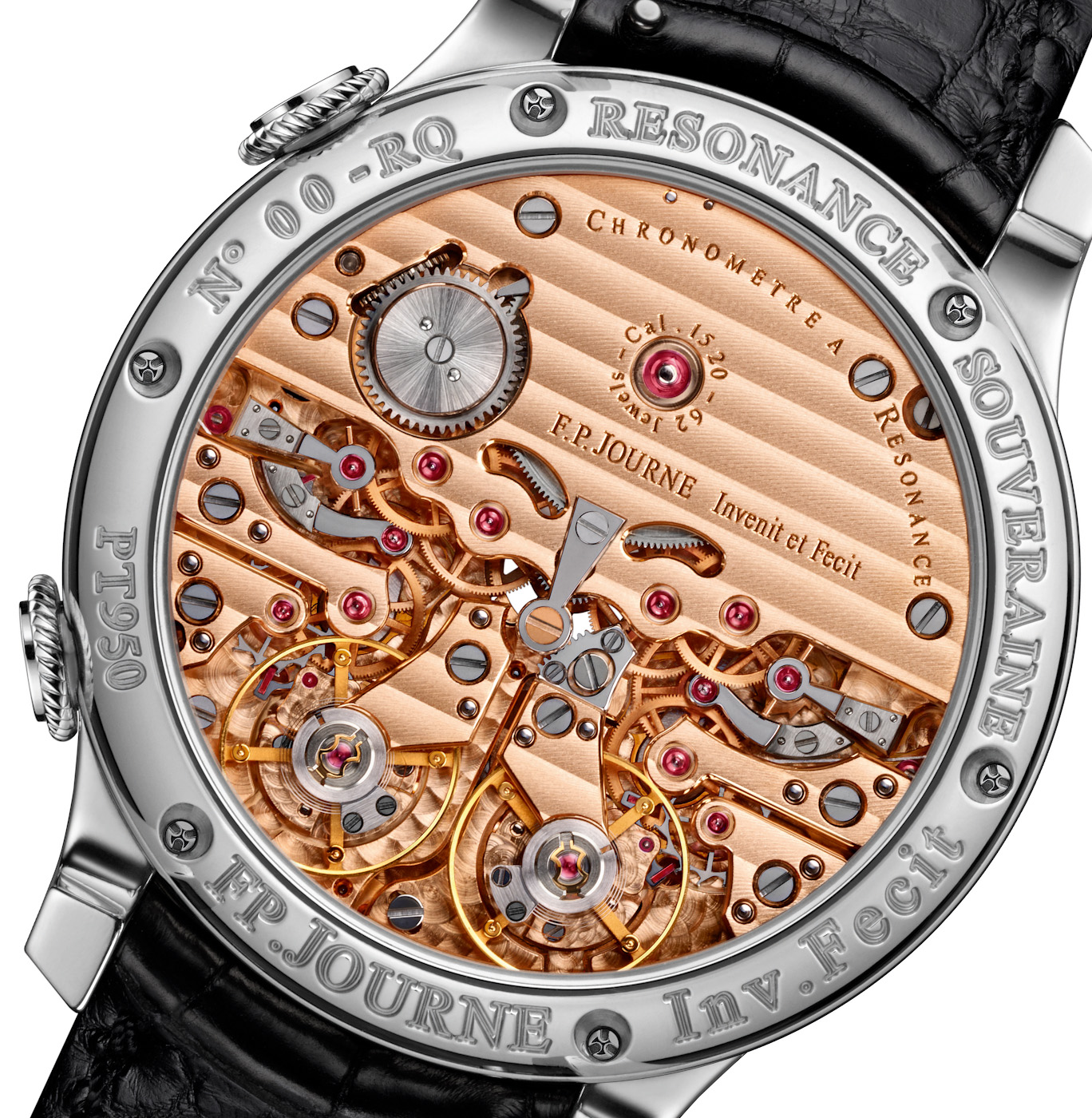 All these things, however, have been present in all of the brand’s previous Chronomètre à Résonance watches. What sets the Caliber 1520 apart, however, is its use of a single mainspring and barrel powering both balances. It’s perhaps easiest to consider the Caliber 1520 as a pair of conjoined twins. Each of the balances powers its own independent set of gears and hands for the two dials, kept in synchronicity due to carefully controlled frequency resonance, but then “joined at the hip” through the single power-delivering mainspring. This joining is made possible through the movement’s prominently featured differential. Far more familiar to automotive engineers than watchmakers, this differential takes the force from the mainspring and splits it for each of the balance systems using a series of gears, just as a car’s differential takes the power delivered from the engine through the transmission and driveshaft and splits it to turn two separate wheels. Despite essentially powering two independent rear trains, the Caliber 1520 still delivers 42 hours of power reserve with the remontoirs operating for 28 hours. 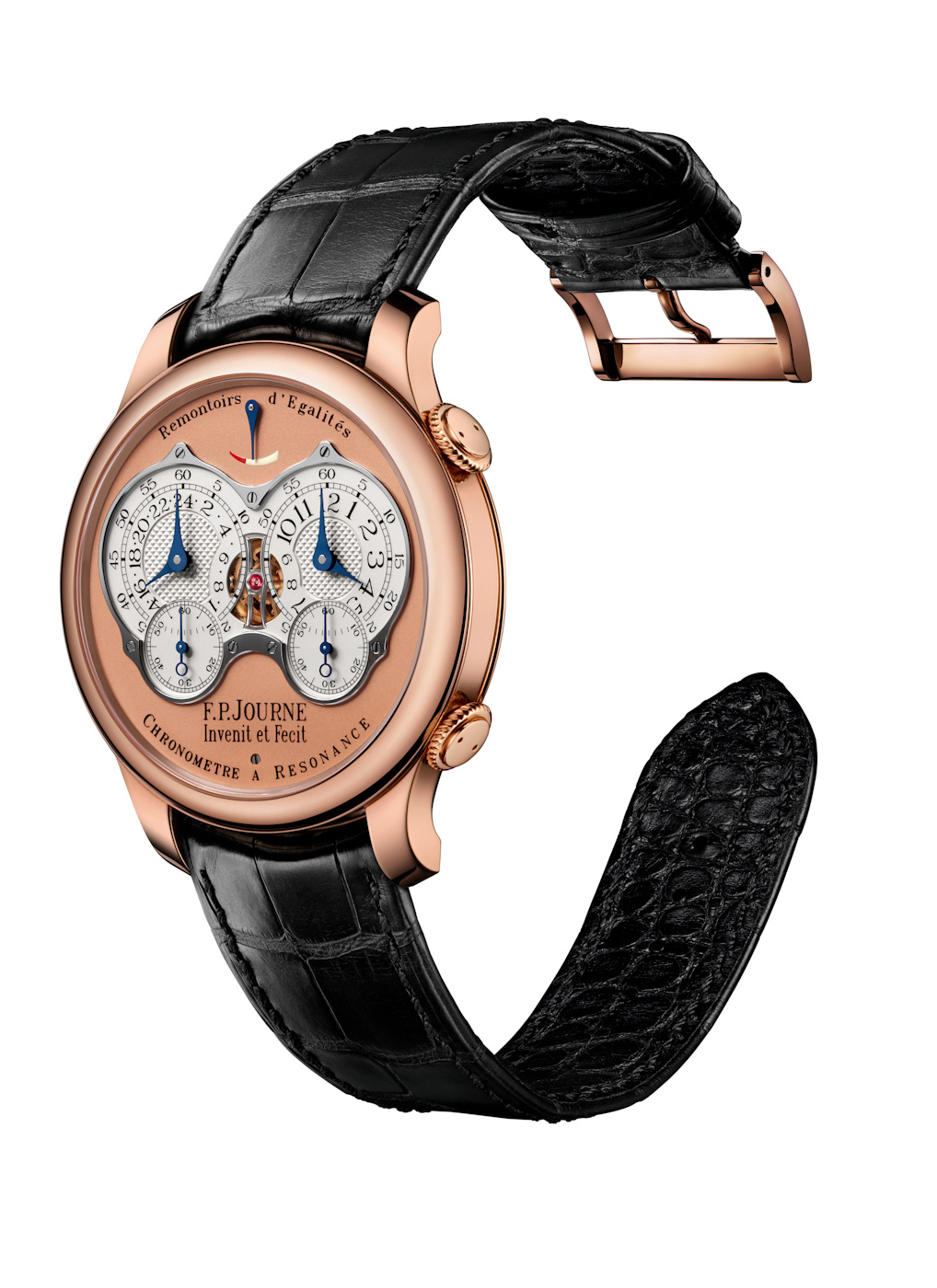 Both the platinum and rose gold variants of the new F.P. Journe Chronomètre à Résonance models are finished with a simple and classical black alligator leather strap. Altogether, these changes to one of F.P. Journe’s signature model lines have allowed these new Chronomètre à Résonance models to keep the overall look of the past 20 years while pushing the envelope of horological expertise. These new models are expected to reach boutiques in mid-2020, at an MSRP of $106,800 in rose gold and $110,600 in platinum. For more information, please visit the brand’s website.