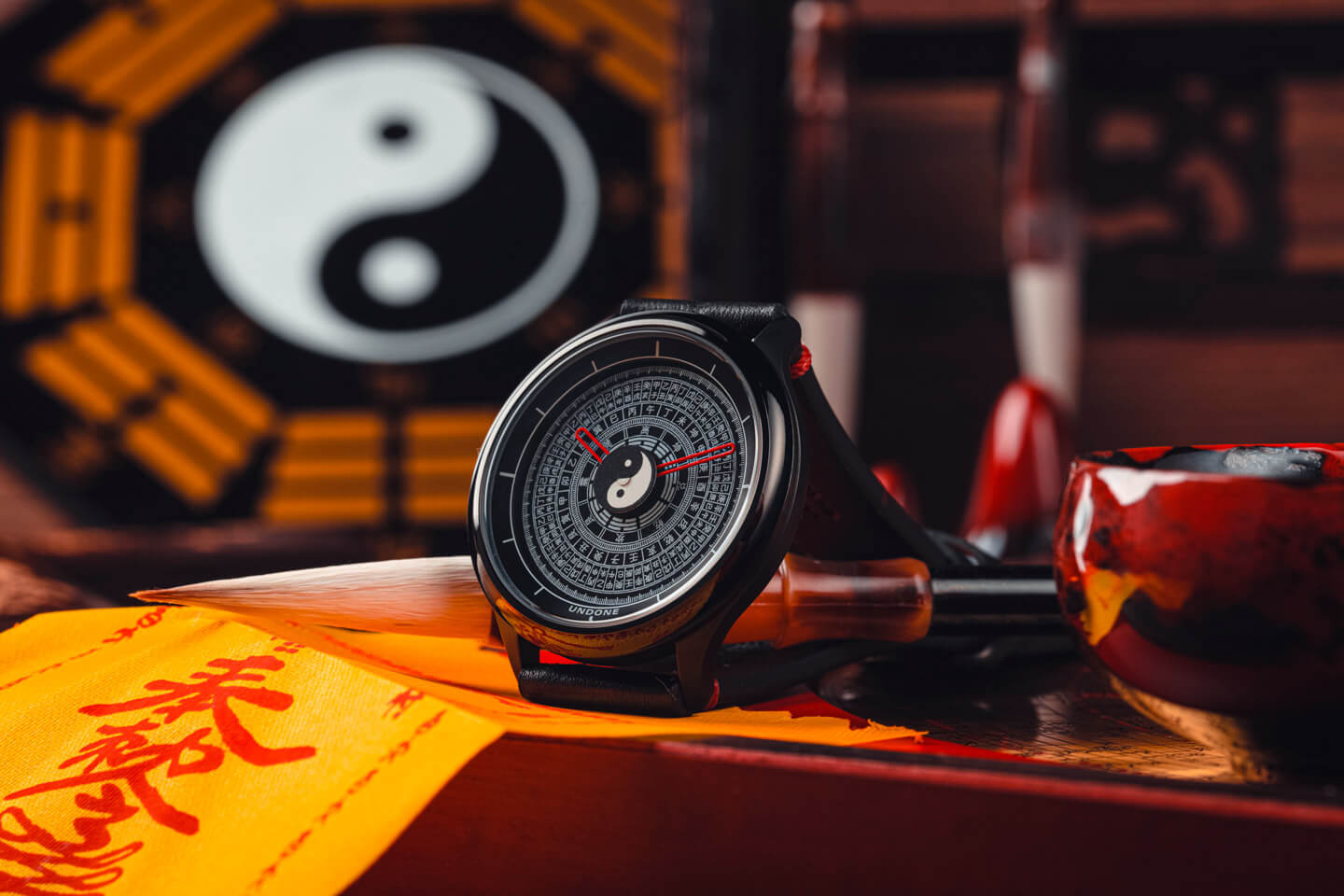 The Zen Cartograph watch collection (aBlogtoWatch hands-on here) is the ambitious result of what happens when a Hong Kong-based wrist watch brands ask the question, “What is the next way we can celebrate our Chinese culture in a timepiece?” Undone’s design team (which has explored a wide variety of cultural themes, so far) went straight for the traditional practice of feng shui for inspiration — and then decided to add some fun pop-culture iconography into the mix. The result is a boldly assertive, proudly Chinese, and visually distinctive timepiece that is priced for the mainstream, yet born from serious enthusiasts.

The Zen Cartograph watch dial is inspired by the philosophy of Chinese Geomancy. In traditional feng shui, a compass-like instrument known as the Luopan is used to determine how objects in a space should be arranged. Those familiar with the device will immediately recognize it as the basis of the Undone Zen Cartograph watch dial, and those unfamiliar with the Luopan should be left curious and intrigued after seeing the concentric rings with their geomantic inscriptions printed in Chinese. 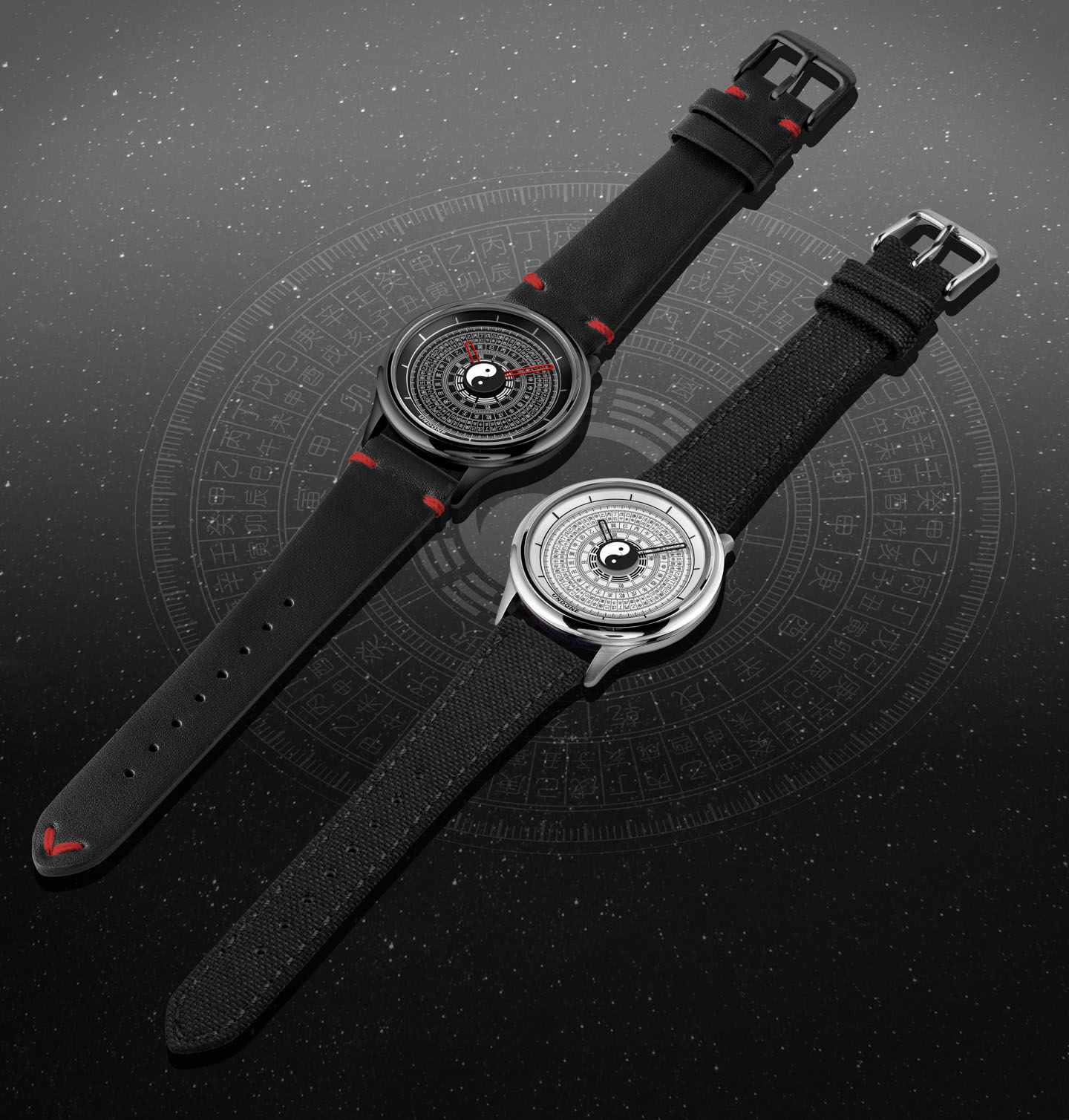 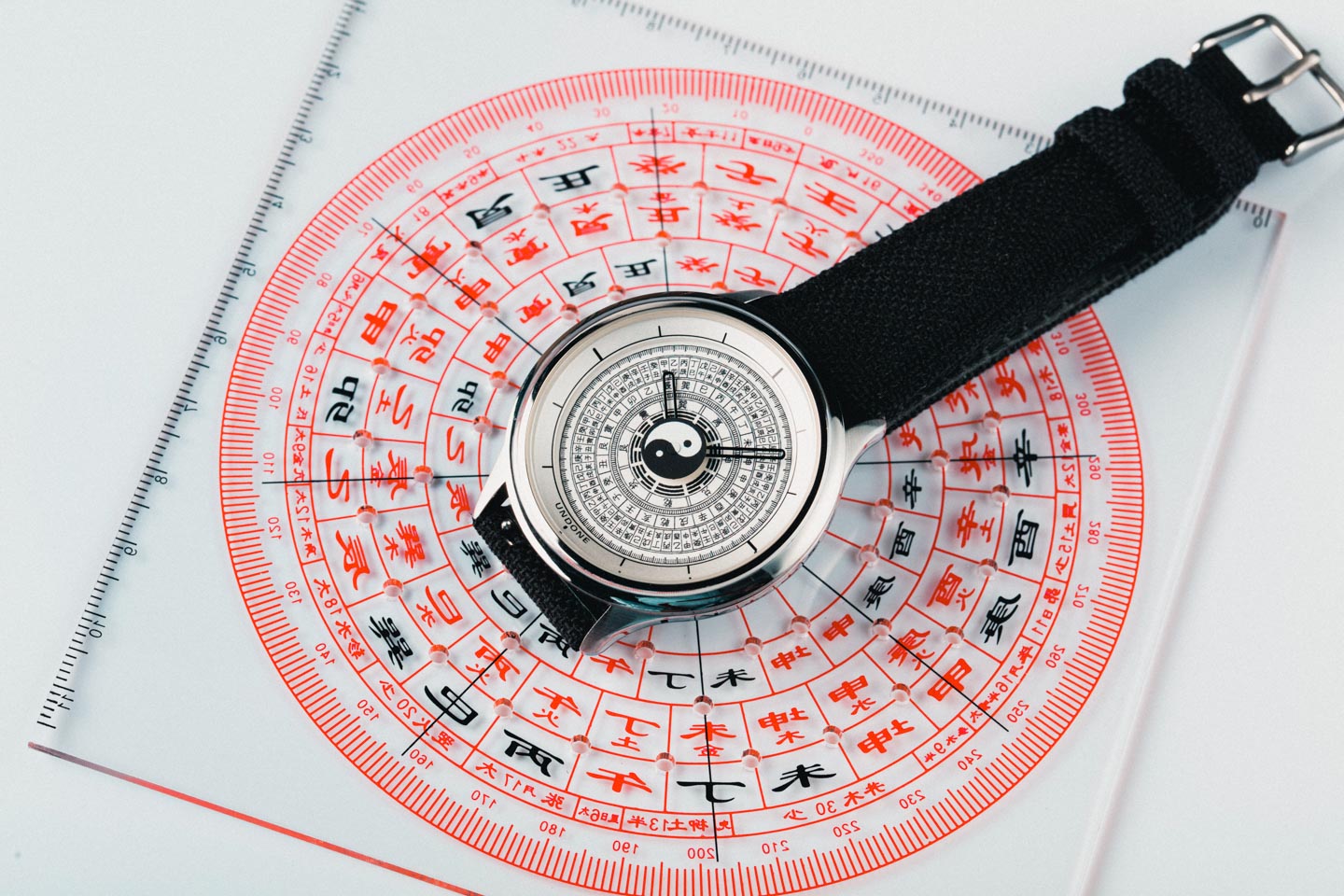 Watchmaker Undone is not just telling a cultural story with the Zen Cartograph; it also offers innovation in the form of a fresh new case design. The most noteworthy feature of the carefully sculpted and polished 40mm-wide (and just 12mm-thick) steel case is the symmetrical position of the crown at the 12 o’clock position. Inside the watch is a Japanese-made Seiko Instruments caliber VH31 quartz movement with a mechanized seconds hand.

Rather than power a traditional hand around the dial, the sweeping seconds indicator system is used to power the centrally mounted Yin-Yang motif disc which makes a full revolution once every 60 seconds. To better understand the philosophy behind the Zen Cartograph and why a Yin-Yang symbol was used on the dial, it is best to hear directly from Undone’s design department directly. Here is the story of imagining and creating the Zen Cartograph directly from the Undone team that crafted it. 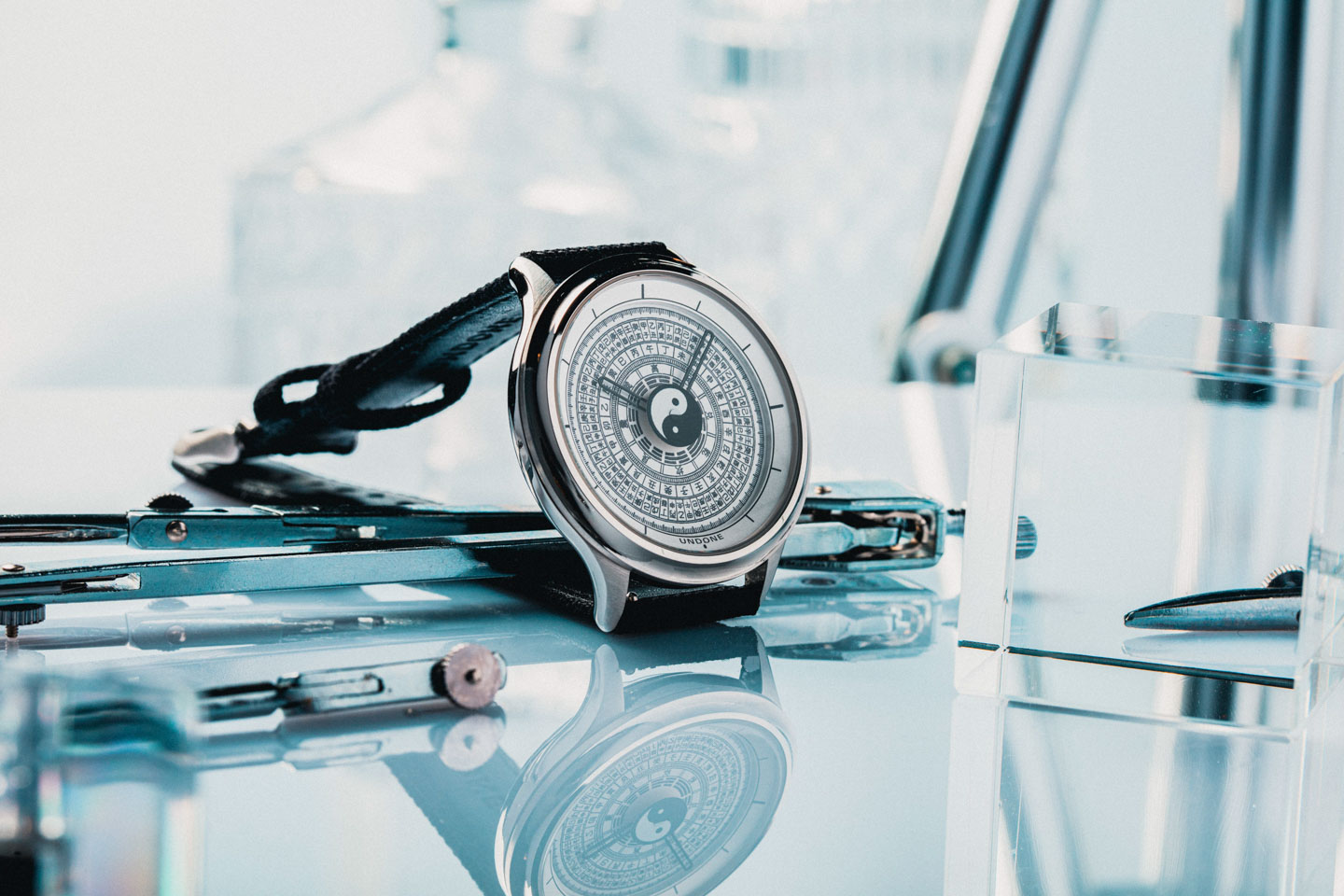 Explain what a traditional feng shui luopan is, in general how it works, and where the inspiration to turn one into a watch dial came from?

UNDONE DESIGN TEAM: Undone has steadily been moving into the direction of designs that are more driven by stories that resonate with the human zeitgeist. Using horology as a medium, we aim to bring our audience thoughtfully curated doses of cultural, historical, and nostalgic intrigue from across the world.

Our recent collaboration with renowned Japanese Katazome fabric crafthouse Simple Union (of the Indigo Nike Air Jordan 1 Retro Hi OG fame) explored the beauty of imperfection, wabi-sabi, through 200-year-old antique Japanese fabric from the Meiji Era for the straps, and we also featured bronze not only as a case material but also as an instrument of introspection and the Buddhist sensibilities toward life, death, and reincarnation. 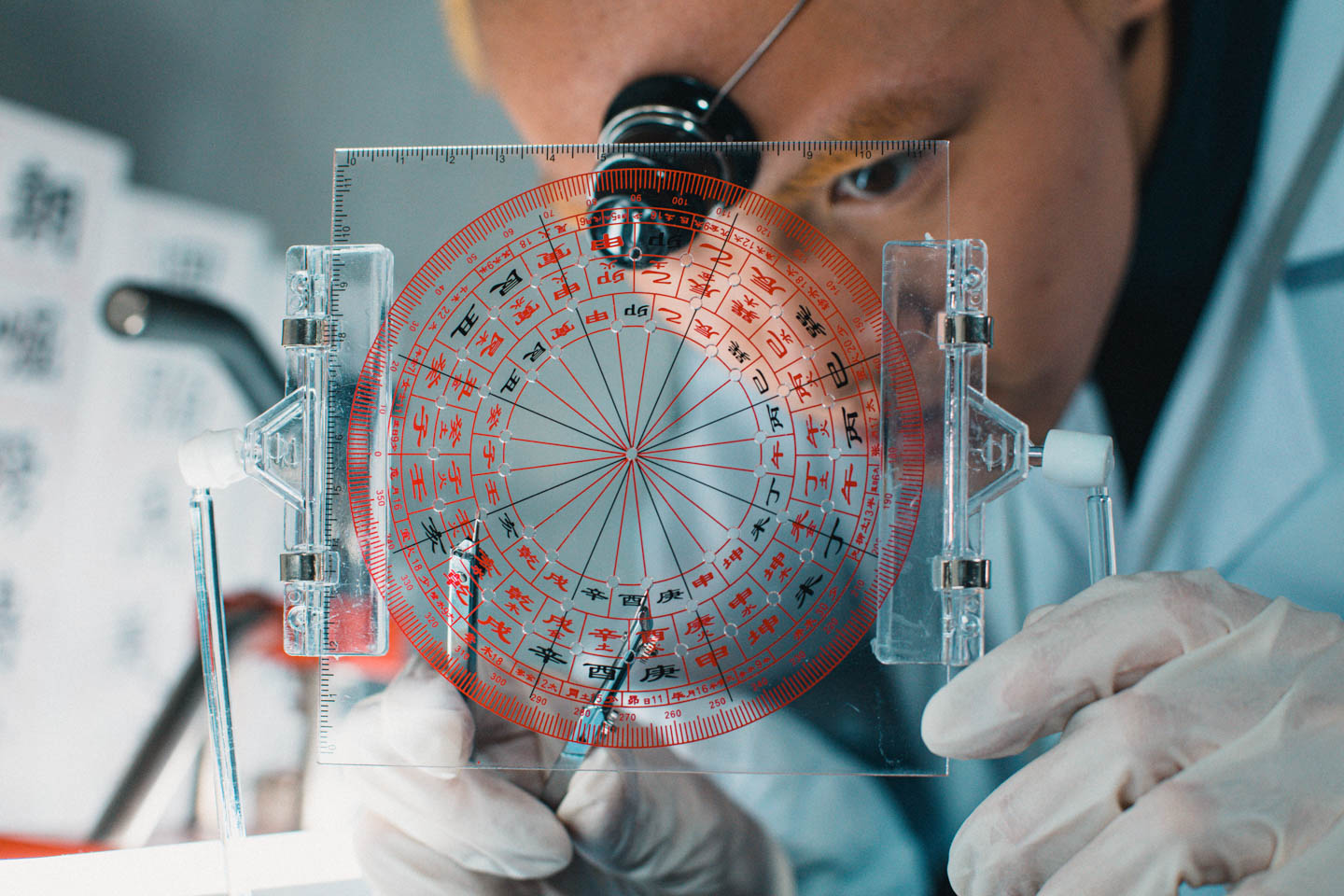 The Undone Zen Cartograph explores the philosophy of feng shui, also known as Chinese geomancy. It is a traditional practice originating from ancient China that studies the “luckiness” and “auspiciousness” of a space, a location, or a building structure through the quantitative and qualitative observation of its environment. “Feng” means “wind” and “shui” means “water.” It is believed that all things are shaped through the interplay of such natural elements and that it is through the delicate balance of the “dark” and “light” properties (“yin” and “yang”) found in these elements that “luck” is ultimately shaped.

UNDONE DESIGN TEAM: Feng shui has always been a subject of modern fascination in both the East and the West, its influences branching beyond archaic superstition and into business strategy, architecture, art, and even fashion. So, we decided that the luopan AKA “feng shui compass,” a 3000-year-old instrument central to the practice, would be the ideal canvas through which to explore the concept. 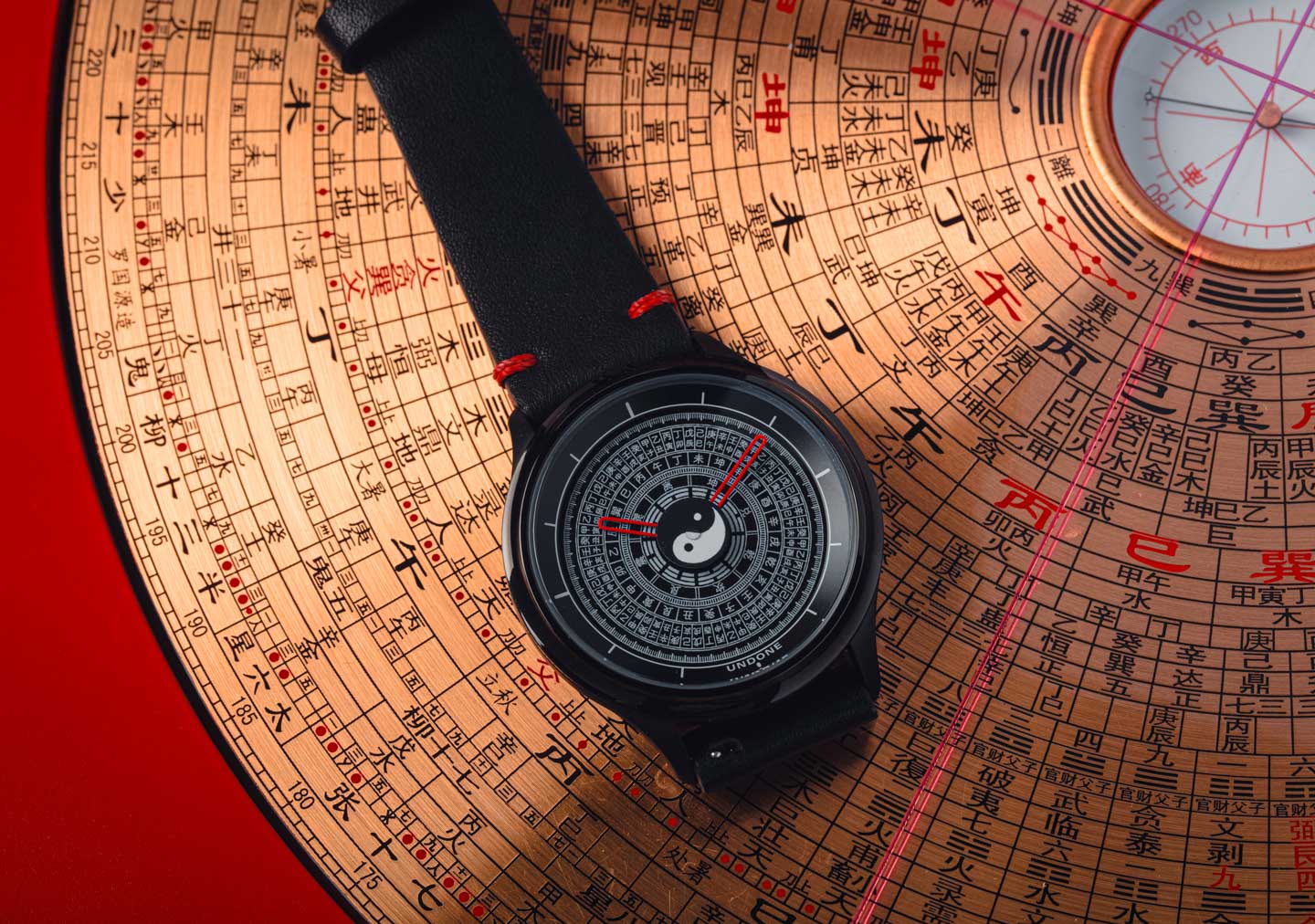 Since the dawn of time, humankind has always looked to the constellations and the earthly elements for answers. In fact, the first-ever magnetic compass, dating back to the Chinese Han Dynasty (200 BC-1 AD), was invented not for geographical navigation, but for the purpose of divination and fortune-telling.

This compass was called the “Luo Pan” (羅盤)” or “Feng Shui Compass,” a device consisting of a south-pointing spoon/needle made with lodestone, a form of the mineral magnetite that is a naturally occurring magnet and aligns itself with the Earth’s magnetic field. Like a conventional compass, a Luopan is a direction finder. However, a Luopan differs from a compass in several important ways. The most obvious difference is the Feng Shui formulas embedded along up to 40 concentric rings on the surface of rotatable disk known as the “Heaven Dial,” which typically sits on a wooden base known as the earth plate. The heaven dial rotates freely on the earth plate. Two red threads called the “Heaven Lines” run across the compass for the purpose of observing alignment between the rings. 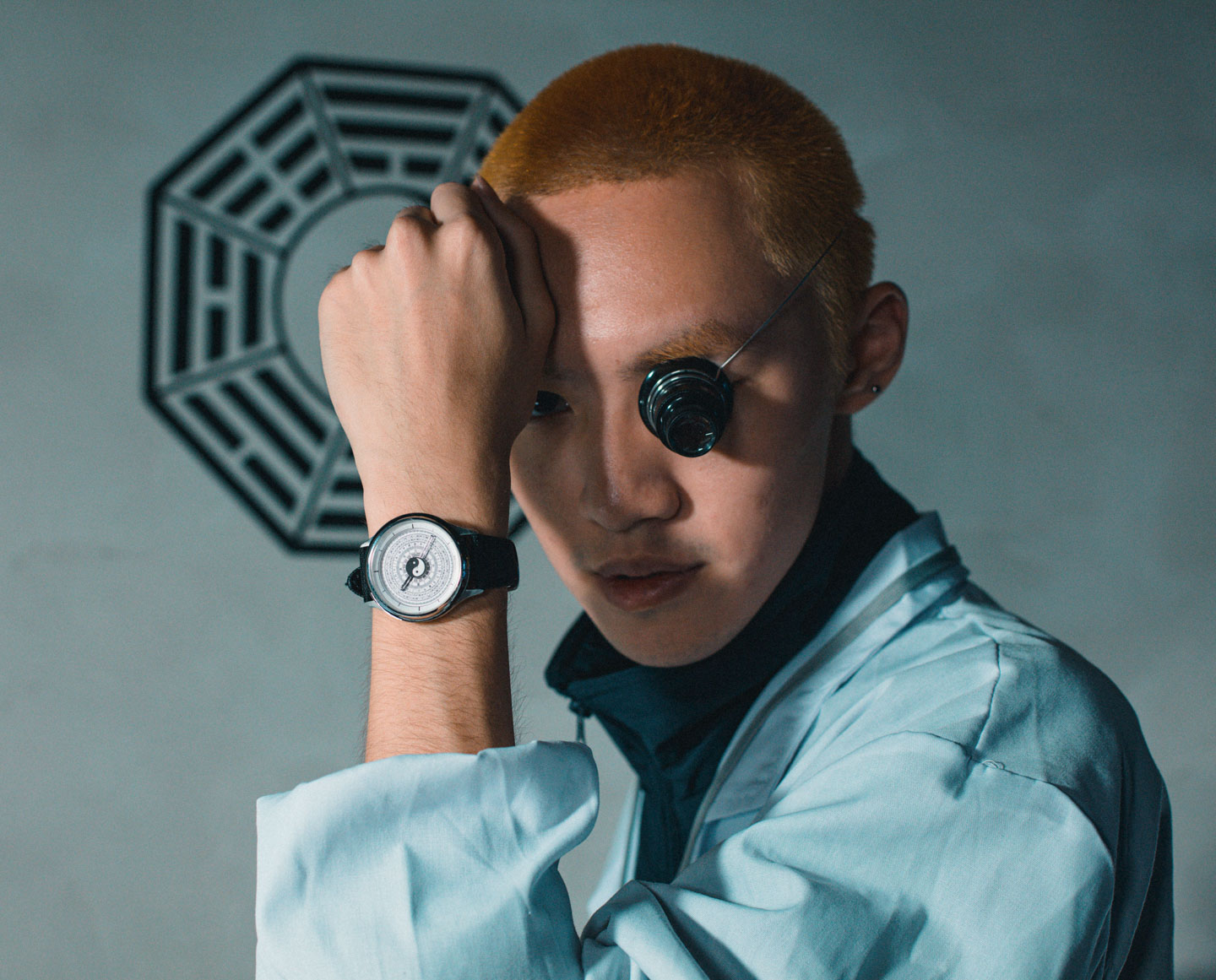 Talk about some of the design challenges involved in transforming a luopan into a watch dial. How did you overcome those challenges?

UNDONE DESIGN TEAM: One of the major challenges in designing the pieces was finding a way of aesthetically translating this elaborate device onto dial form without overshadowing its underlying philosophy with an over-literal design — hence, instead of grafting all 40 rings of the luopan onto the dial, we opted for borrowing only the ones most representative of feng shui’s fundamental framework: three rings used respectively for the charting of terrestrial magnetism, the alignment of governing heavenly constellations, and the five elements in proximity (earth, wind, fire, wood, and metal). The functionality of a conventional seconds hand was forgone and, in its place, the iconic yin-yang symbol is featured, perpetually spinning in the center, a nod to the constant interplay between light and darkness that makes up the whole of reality/time and space. 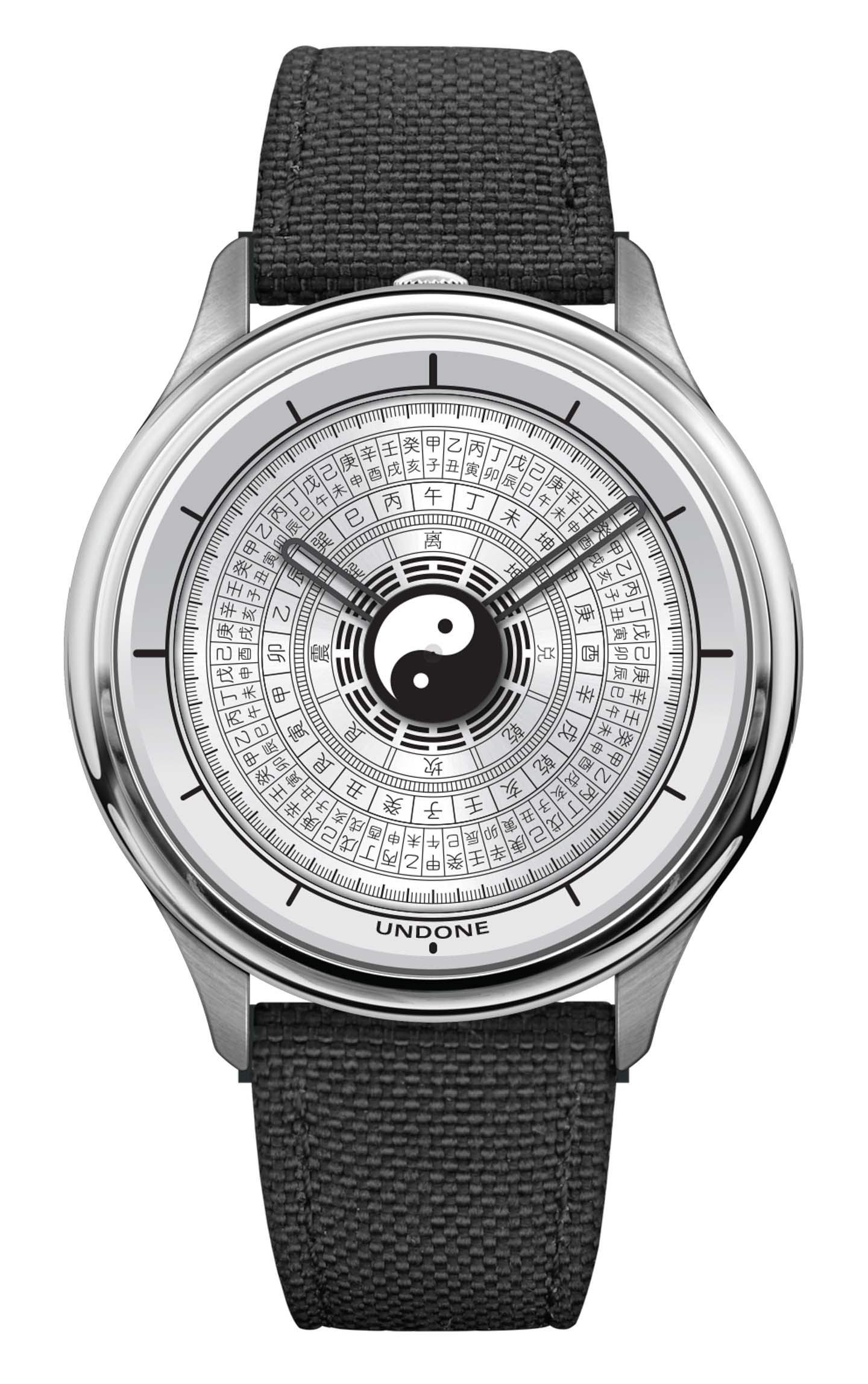 Speaking once again about Chinese culture, let’s focus on fashion. How do you see elements of traditional Chinese culture being included in modern fashion — both in Chinese-speaking parts of the world and elsewhere? Explain how the Zen Cartograph is both an attractive watch and an attractive fashion item.

UNDONE DESIGN TEAM: Unlike the Undone Simple Union Bronze, the Undone Zen Cartograph stands out from our previous horological introspection on cultural intrigue in the sense that this is the first time we experimented with a more fashion-centric interpretation, taking liberties with integrating modern pop culture elements — most noticeably the sci-fi narrative and iconography of the sinister secret organization “Dharma Initiative” from popular TV series Lost, in yet another nod to pop culture fandom. 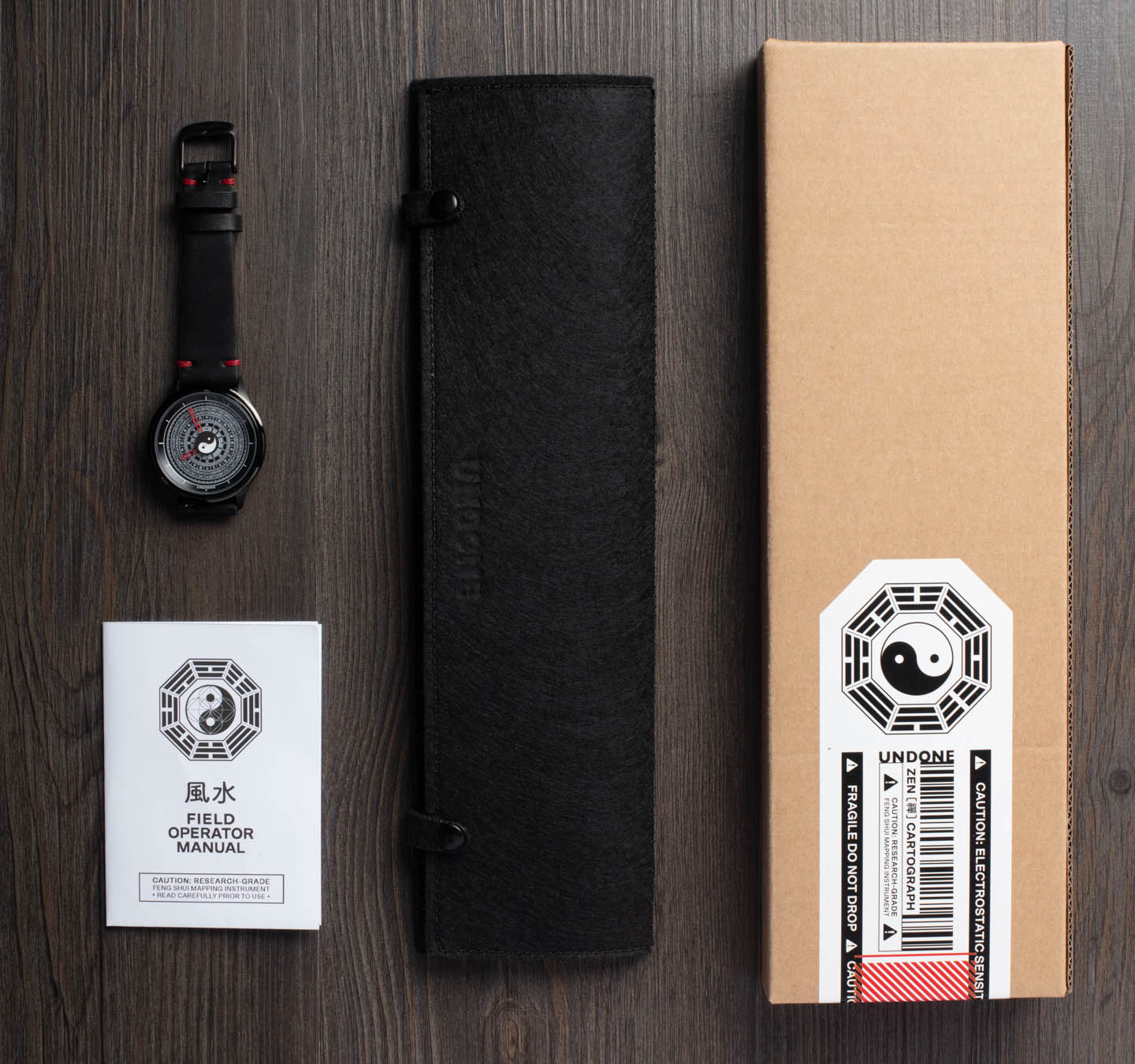 As can be seen on the futuristic laboratory-esque labels used to seal the boxtops of every unit, complemented by an accompanying “Field Operator’s Manual,” the Undone Zen Cartograph is introduced as a “Research Grade Feng Shui Mapping Instrument” — a unique fashion accessory and novel collector’s item we hope both experts and strangers to the concept of feng shui can have fun with.

Learn more about the Zen Cartograph watch, or order via the UNDONE website here.