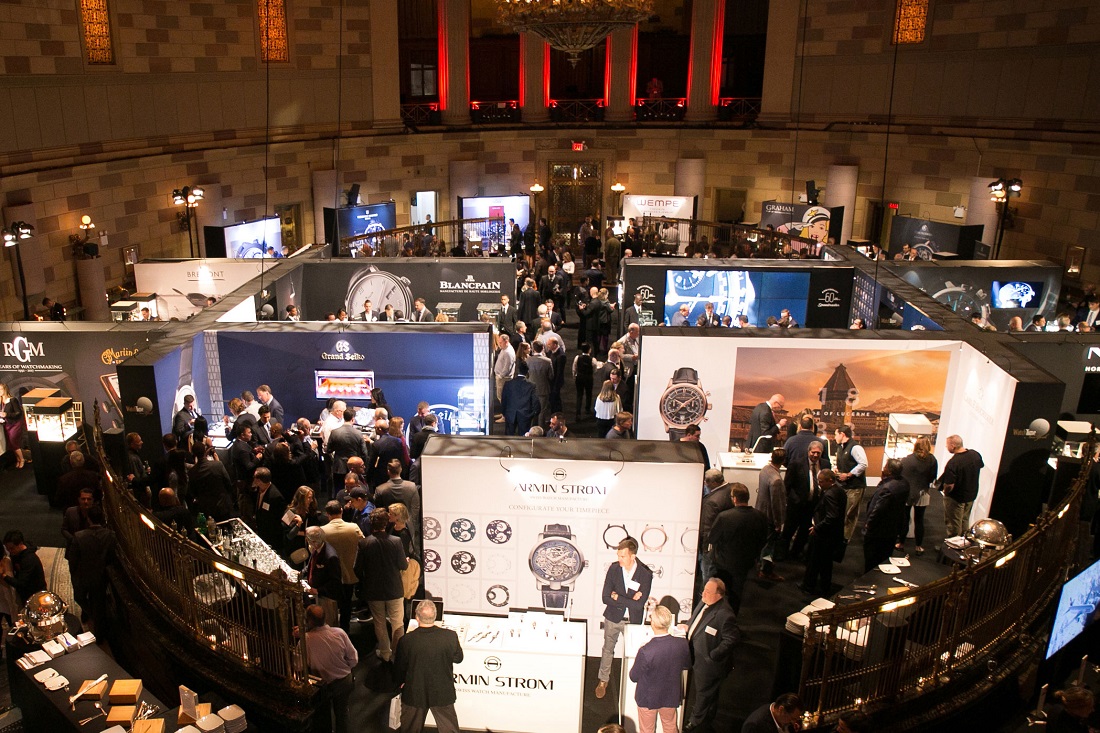 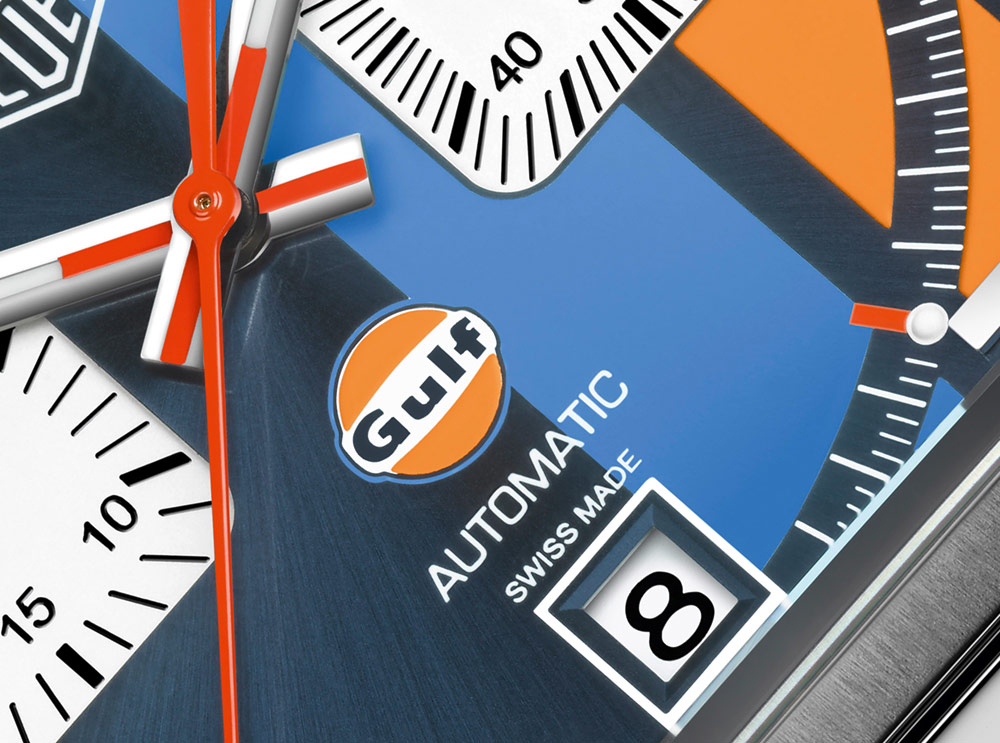 Inside the watch, and visible under a screwed sapphire caseback, is the modern version of the self-winding Caliber 11, which features a rapid date correction, a 28,800bph balance frequency, and a 40-hour power reserve in addition to its integrated chronograph function. The Gulf logo colors also appear on the watch’s strap, made of perforated blue calfskin leather with orange stitching and orange lining. The TAG Heuer Monaco Gulf Special Edition will be available only in the US. 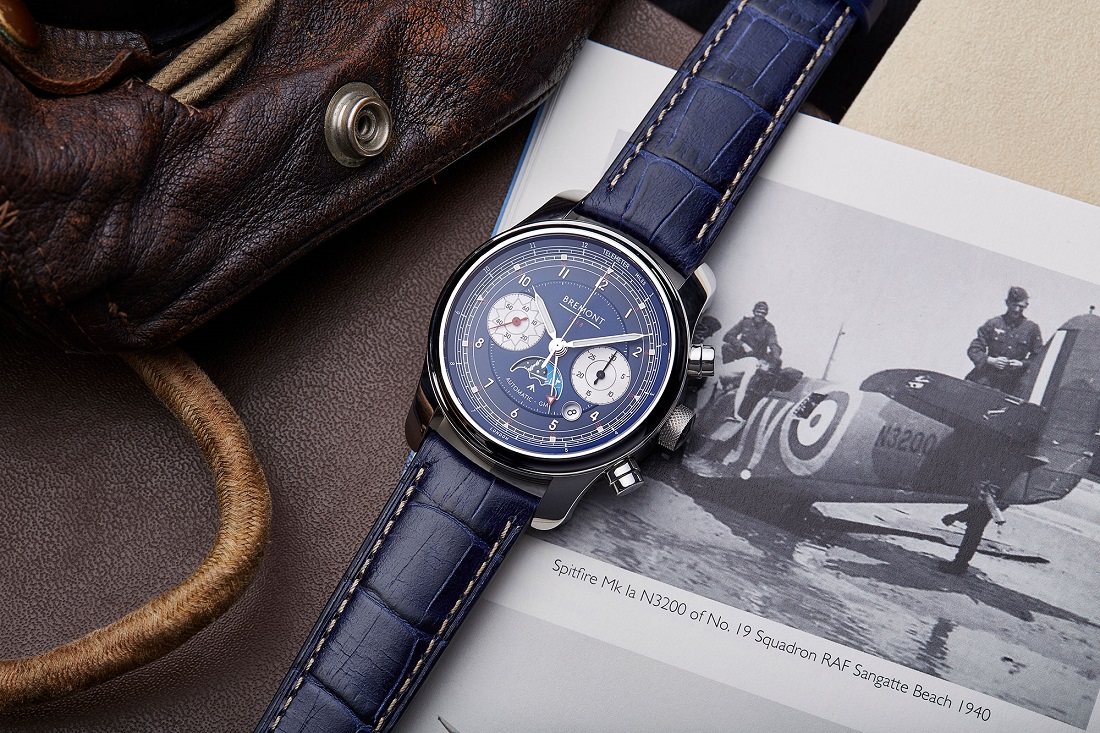 Bremont – the independent brand that’s bringing watchmaking back to Britain, and British aviation history into watchmaking – brought its latest limited-edition timepiece (which had been unveiled to a select group of media in London the week prior) to a US audience for the first time at WTNY. 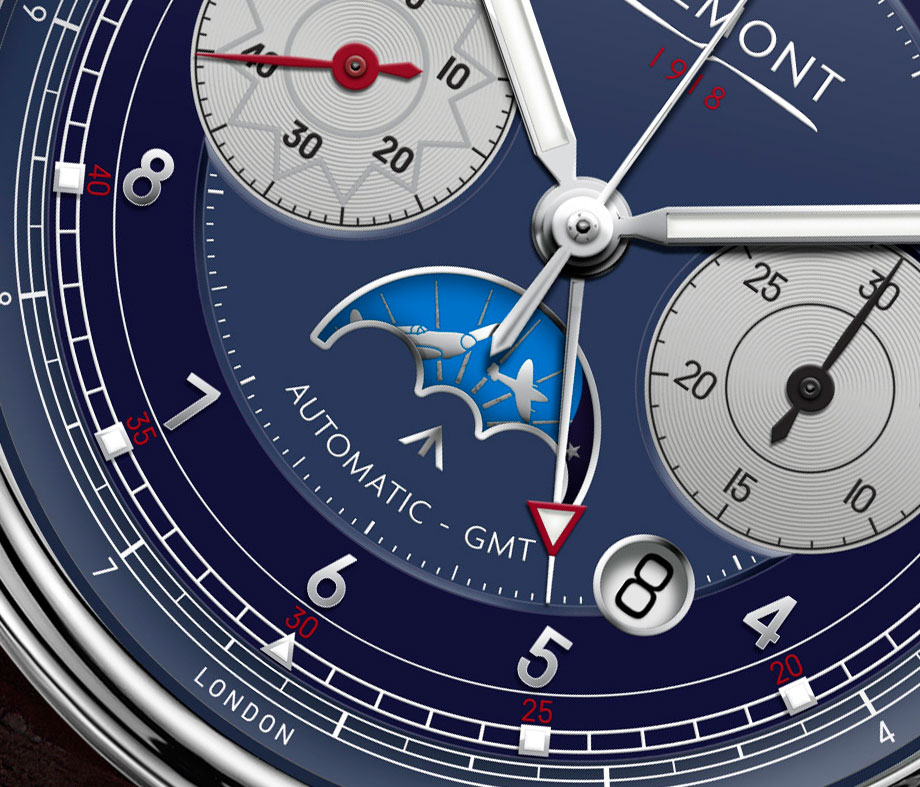 The Bremont 1918 Limited Edition was designed to commemorate the 100th anniversary of the British Royal Air Force (RAF), the world’s oldest independent air force and an institution with whom the brand’s aviation-enthusiast founders, brothers Nick and Giles English, have long held close ties. The dial design incorporates features from traditional RAF sector clocks and includes, for the first time in a Bremont watch, an AM/PM indicator. The latter display, in a moonphase-like aperture at 6 o’clock, depicts day and night by means of two air-battle scenes from history: the Supermarine Spitfire in a daytime dogfight during the Battle of Britain and an Avro Lancaster bomber on a nighttime search mission. Another first for Bremont is the use of a telemeter scale around the dial’s periphery, a feature that allows the wearer to approximately measure the distance to an event that can be seen and heard, such as a lightning bolt or torpedo strike. 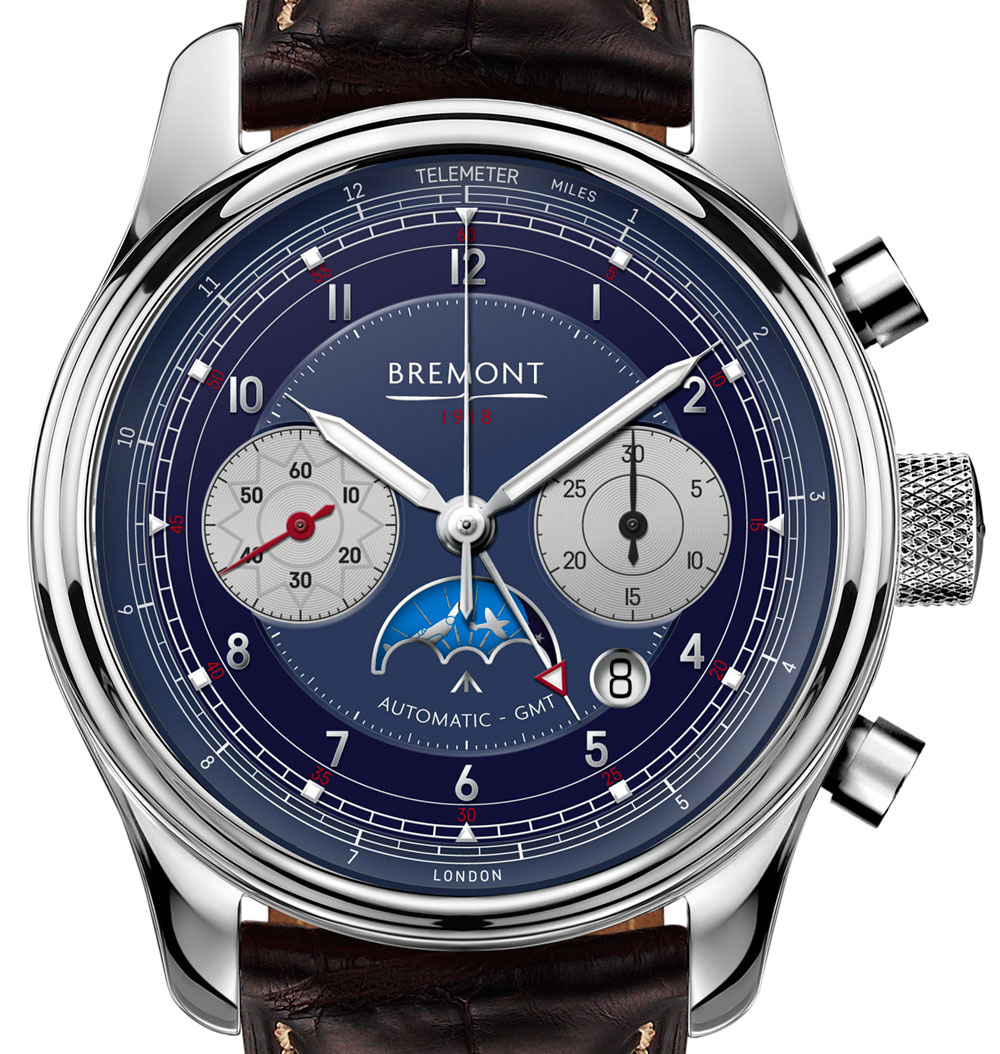 Even more historical inspiration can be found when one turns the watch over, and spies through the sapphire caseback the automatic, chronometer-certified Bremont Caliber BE-16AE and its very special, propeller-shaped rotor. Like other Bremont historical limited editions with historical themes, the 1918’s movement incorporates actual antique materials. Here, it’s an unprecedented four historic aircraft that fought with the RAF during both World Wars, all inserted into the rotor. In the center, and representing World War I, is a veneer of original wood from the Shuttleworth SE5a, a biplane that flew for the RAF in 1918. Each of the rotor’s three propeller blades are made from aluminum skin material from one of three World War II aircraft, two of which fought in the Battle of Britain: the Supermarine Spitfire, Bristol Blenheim, and Hawker Hurricane. The movement, which has a power reserve of 42 hours, is equipped with a GMT function and a chronograph in addition to the timekeeping, the date, and the day/night indicator. 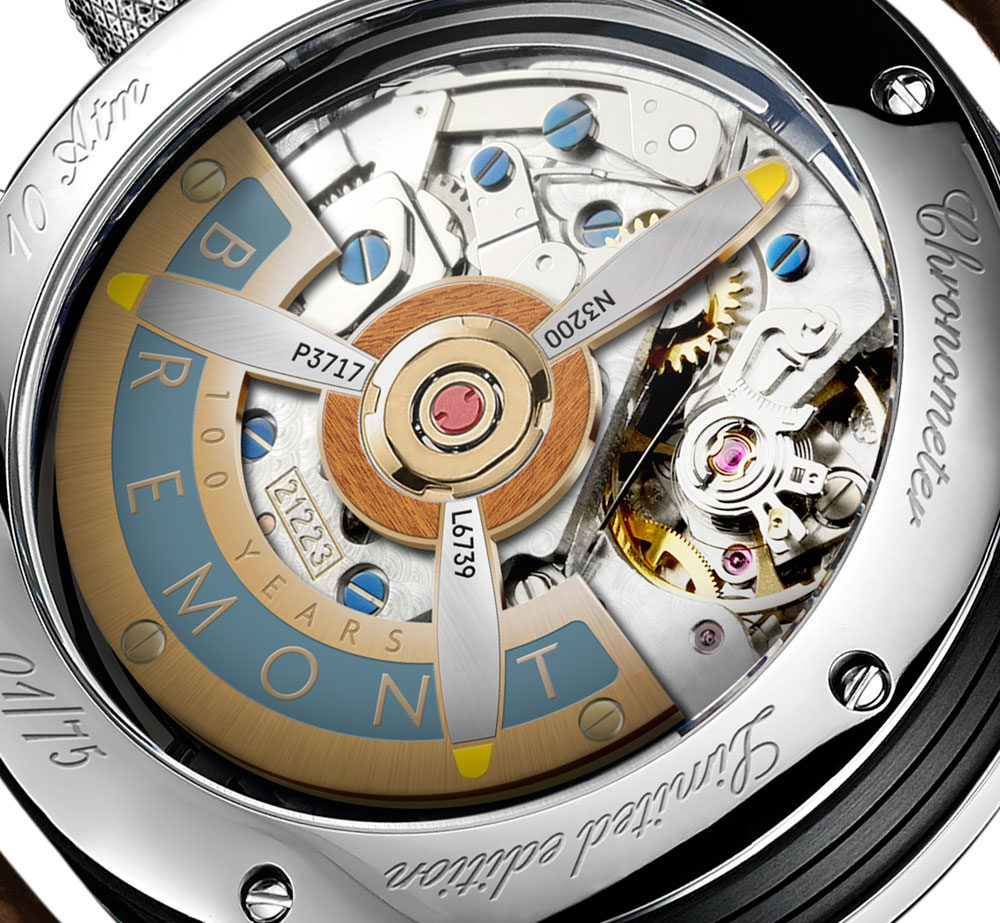 The Bremont 1918 Limited Edition comes in three versions, all with 43mm cases in Bremont’s modular “Trip-Tick” construction: 275 pieces with a stainless steel case and white dial, 75 in white gold with two-tone blue dial, and 75 in rose gold with black dial. 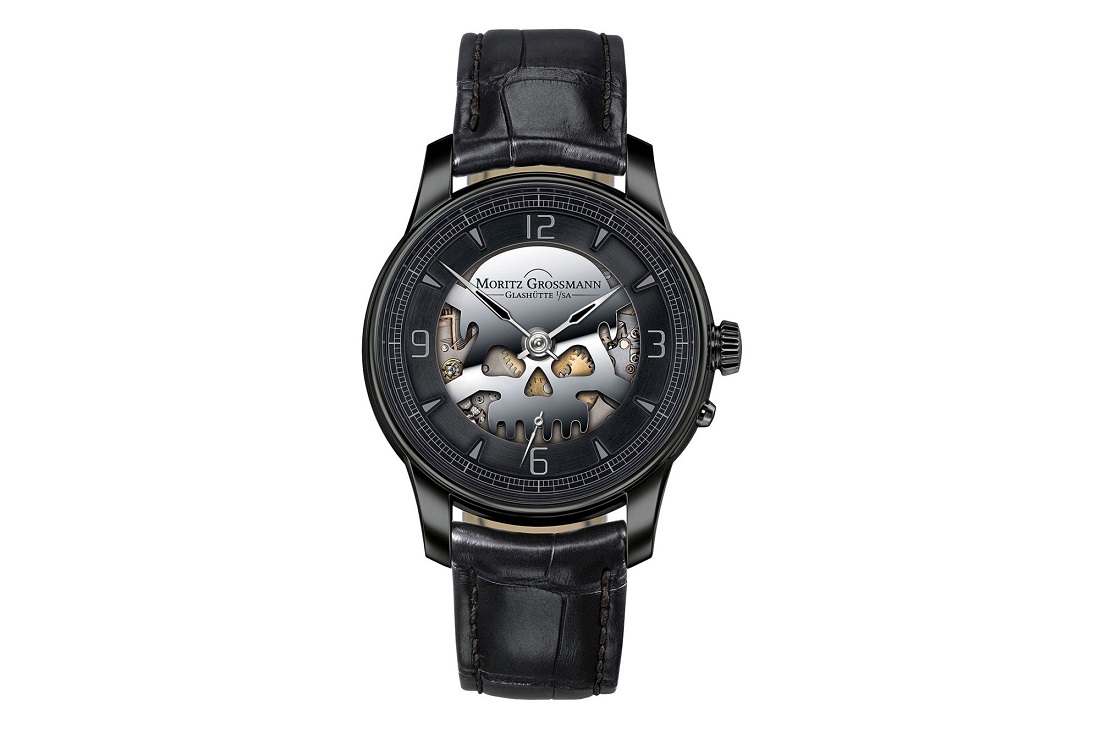 Also having its coming–out party at the two-day event was the new ATUM Pure Skull from Glashütte-based boutique brand Moritz Grossmann. As with previous models in Grossmann’s flagship ATUM Pure collection, the watch’s dial features two distinctive rings for the minute and hour indications. However, in this new model, a stylized skull motif in the dial’s center takes the place of its predecessors’ familiar “Mesh” and “Long Hole” dial inserts. The proprietary design offers dial-side glimpses of the movement, the Caliber 201.1. The skull is milled and wire-cut with electrical discharge machines, its surface polished or sandblasted to match the case, and then assembled with the remaining dial elements – a manufacturing approach that lends itself to incorporating other motifs or symbols in future dials. The lance-shaped, stainless steel hands are crafted by hand at the company’s Saxon manufacture and filled with black HyCeram to coordinate with the hour markers. 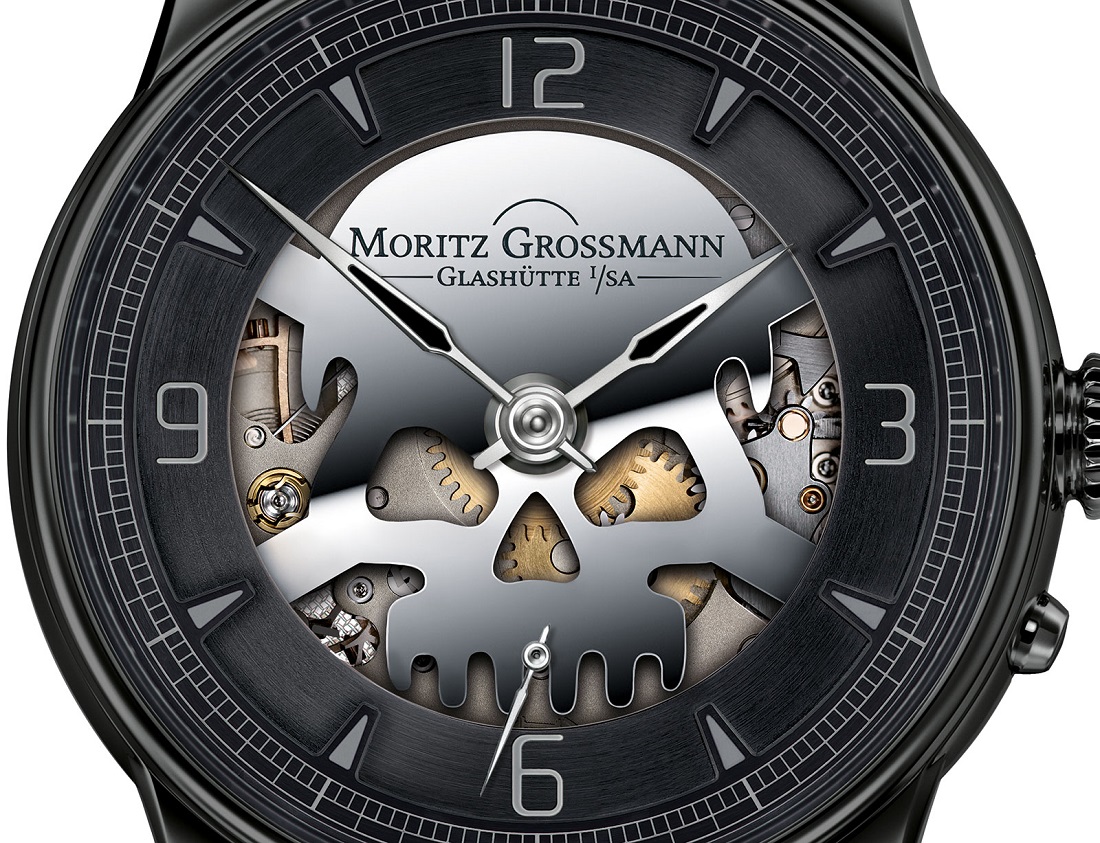 Moritz Grossmann’s manual-wound Caliber 201.1 is even more visible through the watch’s sapphire display caseback. Specifically designed to be cased in stainless steel, it sports the brand’s “Pure-Classic finish,” with German silver plates shot-peened with glass beads for enhanced aesthetic appeal. The white sapphire bearing jewels, a Grossmann hallmark, are pressed directly into the plate. The movement screws are polished flat and retain their original steel hue. The movement is equipped with the Grossmann balance, the Grossmann winder with pusher, a modified Glashütte stopwork, and the Grossmann micrometer screw, all elements typical of the brand and signs of traditional Glashütte watchmaking.

For watch highlights from all 30 WatchTime New York 2017 exhibitors this year, click here.