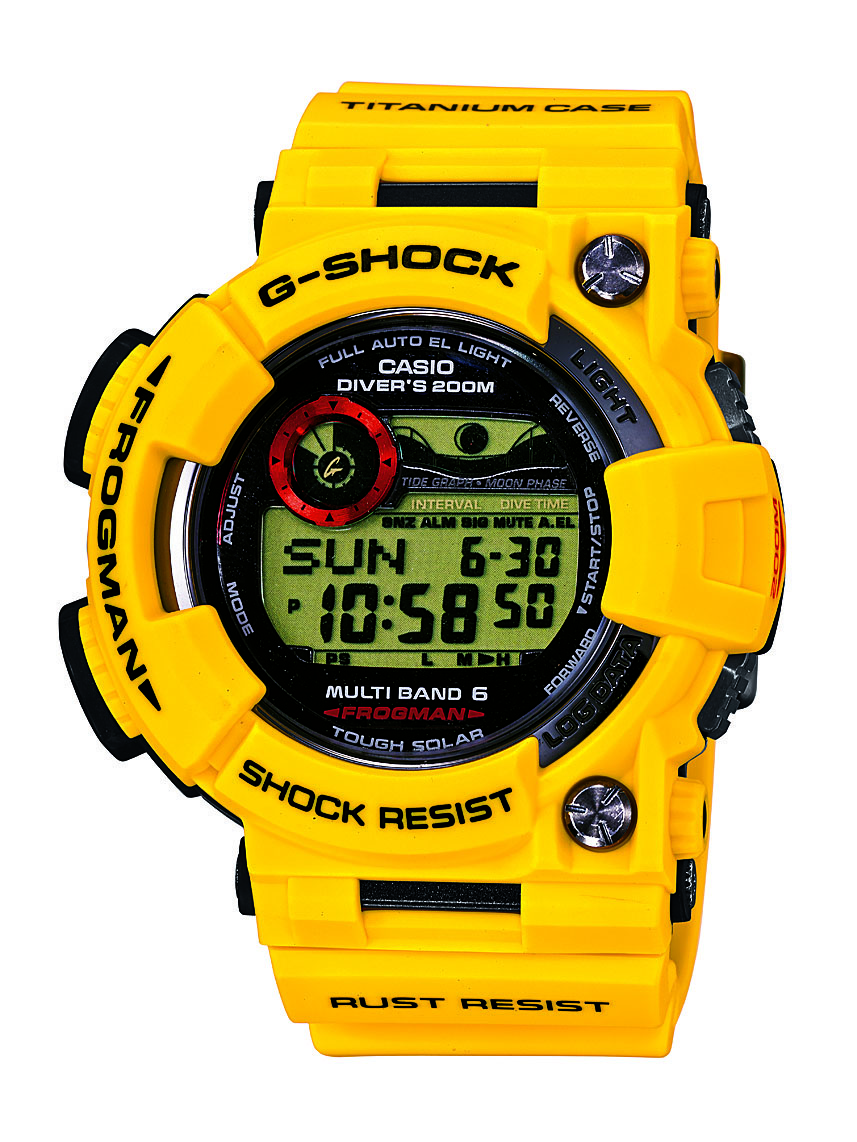 Along with a host of other watches Casio releases the Lightning Yellow collection for the 30th Anniversary of Casio G-Shock. As they say, they intended to capture the “G-Shock toughness” in this shockingly vivid color, and that “this collection seamlessly combines the legendary shock resistant structure with high performance functionality.” That may very well be true, but for now, the only thing I feel in this ~110 Fahrenheit summer haze is the vibrant yellow color cunningly growing on me. I really do need something cool in this (almost) melting room – and one of these just might be it!

The one sporting the latest design of the lot is to the left on the image below: the Casio G-Shock GDX6930E-9. Seems familiar? Rightfully so, as the Casio G-Shock GDX6930 belongs to the brand new Casio G-Shock XL 6900 family – a larger, more wrist-dominant version of the best-seller DW6900. The case is water resistant to 200 meters, it is shock resistant – obviously – and utilizes an advanced shock absorption material called Alpha-Gel® in its construction. That latter modification was necessary as the nearly 10% expansion in its size compared to the DW6900 meant a tougher, harder shock upon impact. A vast array of functions have been crammed into this model, such as the auto LED Super Illuminator for flick-on-the-wrist nighttime viewing, 48-city world time, five daily alarms with flash alert, 1/100th sec. stopwatch, 1/10th sec. countdown timer and four Multi-home Times for the modern “jetsetter lifestyle.” The Casio G-Shock GDX6930E-9 then is very clever, very big, and very yellow – everything a Casio G-Shock can and should be, in my opinion.

The Master of G Frogman is another obvious choice to include in this collection. The models are the Casio G-Shock GF8230E-9 and Casio G-Shock GWF1030E-9, respectively. They are intended to be bold and specialist diver watches and so they sport ISO Certified 200 meters water resistance, full metal cases and Tough Solar Power. Among other things they also feature tide-moon graphs, data memory up to 10 logs and full auto EL backlight for quick display illumination. The Casio G-Shock GF8230E-9 has a stainless steel case while the one for the Casio G-Shock GWF1030E-9 is made from titanium and ultimately both are wrapped in urethane resin. There is a high-end version, the Casio G-Shock GWFT1030E-9 Frogman which incorporates G-Shock’s Multi-band 6 Atomic Timekeeping technology for radio-controlled time/date updating. Still, beyond mere specs there is a lot to like about the Frogman and the fact that now they are available in this vibrant yellow color is not only a lovely feat, but is also a cool homage to much earlier days of the brand.

The limited edition Lightning Yellow collection will be available this December. The Casio G-Shock GDX6930E-9 will retail for $140, the Casio G-Shock GF8230E-9 for $500, while the high-end Casio G-Shock GWFT1030E-9 for $1,700. They will be by select fashion boutiques, key jewelers, and also the G-SHOCK NYC Soho store. gshock.com