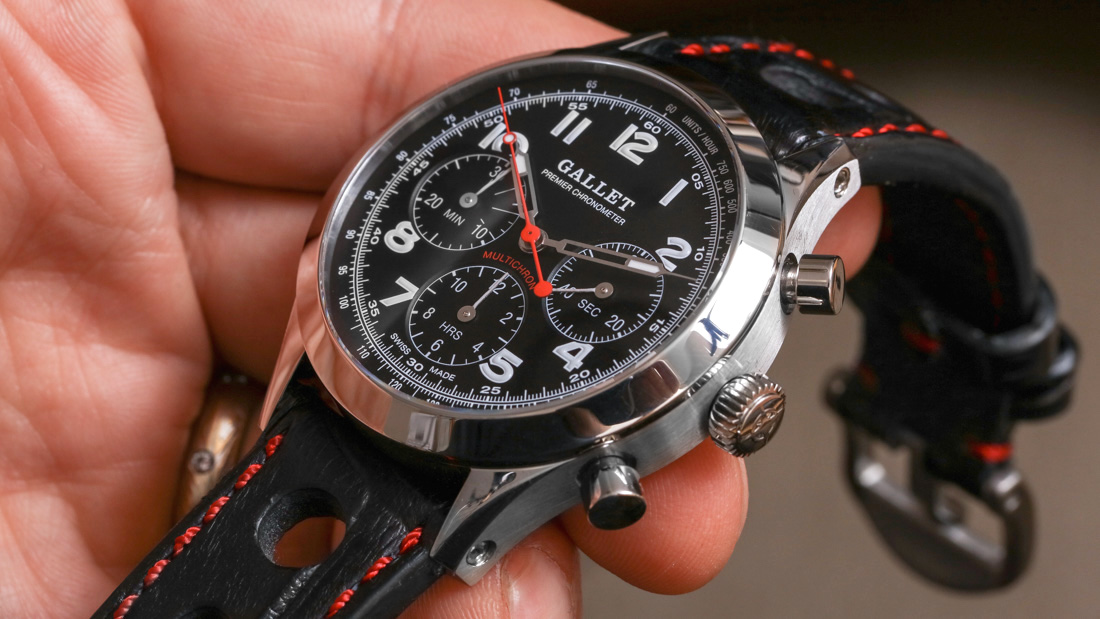 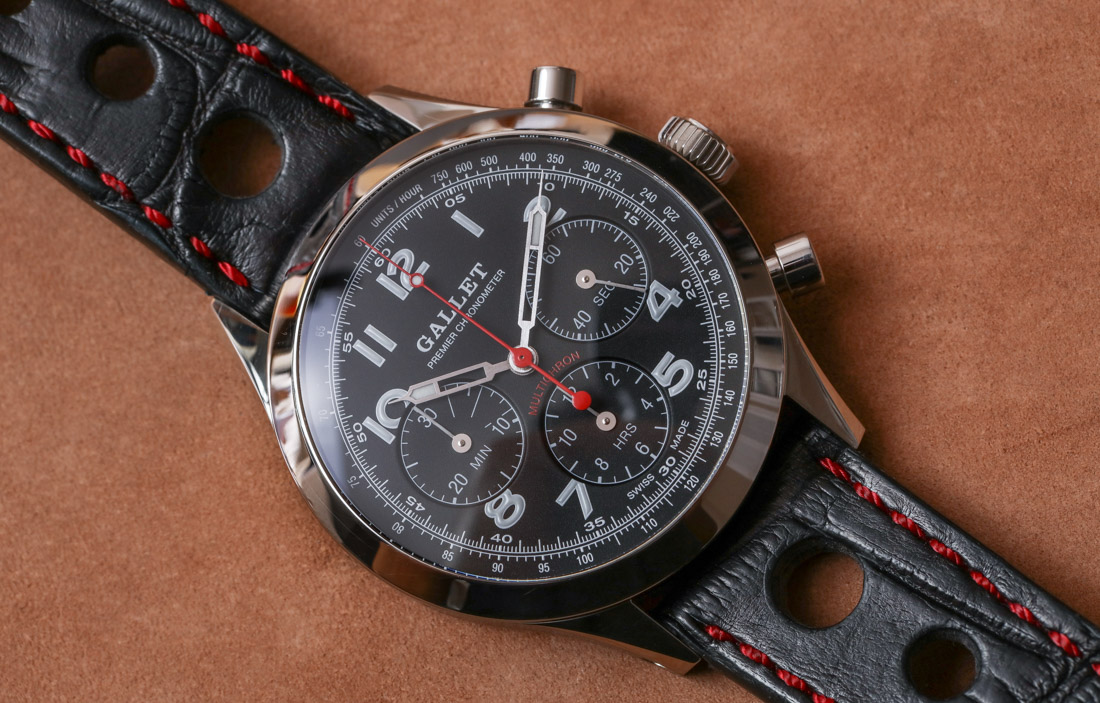 If there is anything I’ve come to appreciate over the last few years, it is a watch designed and produced by people who truly appreciate watches (as opposed to less product-passionate business people). The Gallet Racing Heritage Chronograph is a watch made entirely by passionate enthusiasts – and despite not being inexpensive, it is a shining example of what dedication and persistence can achieve. The Gallet Racing Heritage Chronograph is a new and rare watch from the historic Gallet name, operating in America and built in Switzerland.

To understand the Racing Heritage Chronograph and the reported 10 years that went into making it I spoke to Gallet Managing Director David Laurence on a number of occasions. The brand’s primary issue is that understanding what went into the watch as well as its benefits requires a bit of education. Mainstream watch consumers would likely never take the time to carefully examine the features and genesis of this product. More so, understanding alone doesn’t convince someone to buy the product as they need to be emotionally swept away by the result of all the effort.

I first encountered the Gallet name many years ago as I inherited a vintage Gallet chronograph, which I partially restored to working condition. At the time I did some light research on the brand and was impressed with their interesting legacy – making timing equipment for the early world of automotive racing. Gallet at the time seemed like a more or less dormant brand. Flash forward to today and Gallet isn’t much louder. The brand is operated out of the USA but everything related to the watch is produced in Switzerland. The Racing Heritage Chronograph for instance was produced entirely by Gallet’s partner and high-end movement maker, Vaucher. 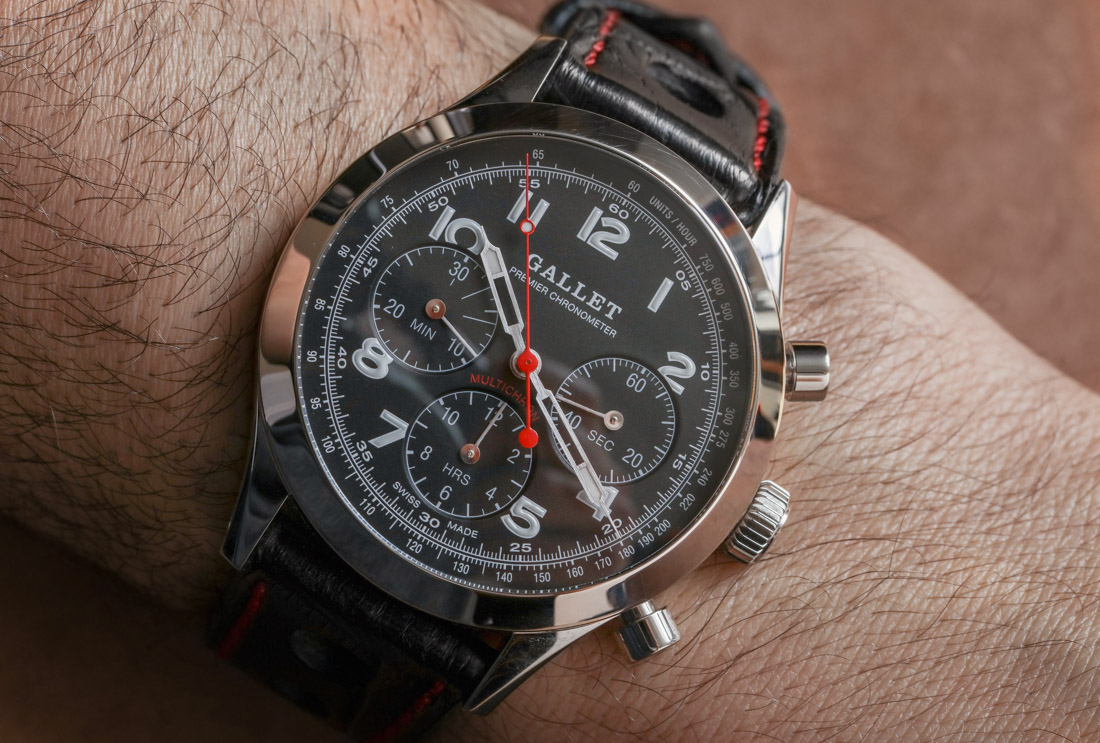 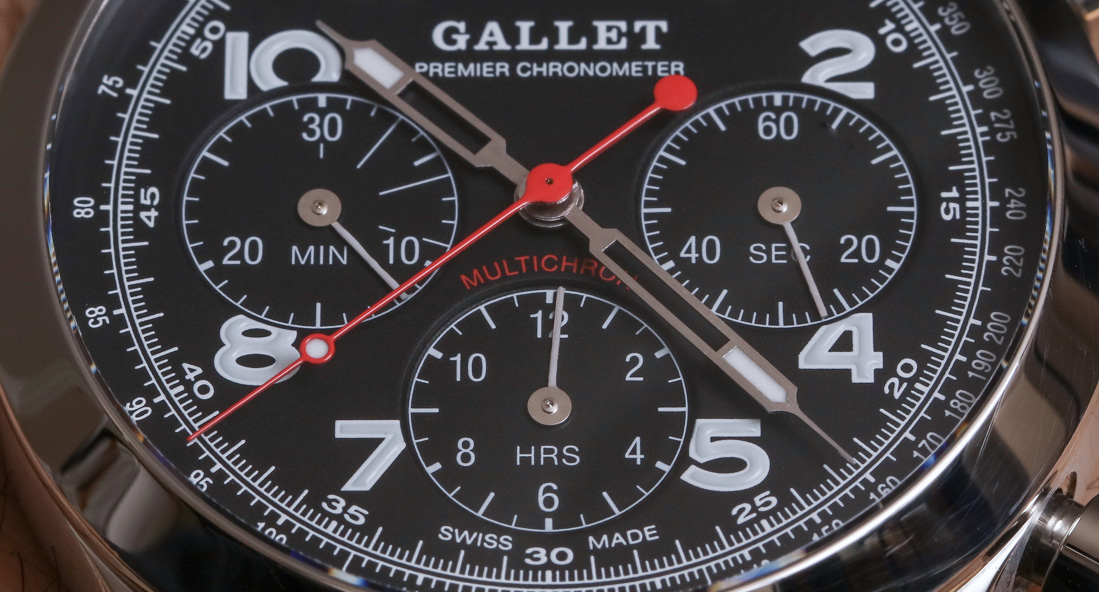 Gallet worked with Vaucher not just to make the watch, but also to make a watch with features that are by no means “off the shelf.” That roughly translates into a case, dial, and movement which have been carefully contemplated, designed, and rendered for a particular purpose. In David Laurence’s mind he wanted to create a notion of his perfect watch, under the Gallet brand, and would push and push and push until the result was as close to perfect as possible. Listening to this fellow “watch guy” talk about his efforts to make the Racing Heritage Chronograph just as he wanted is a lesson in how challenging such a process can be, but also in how rewarding the outcome can be when successful. 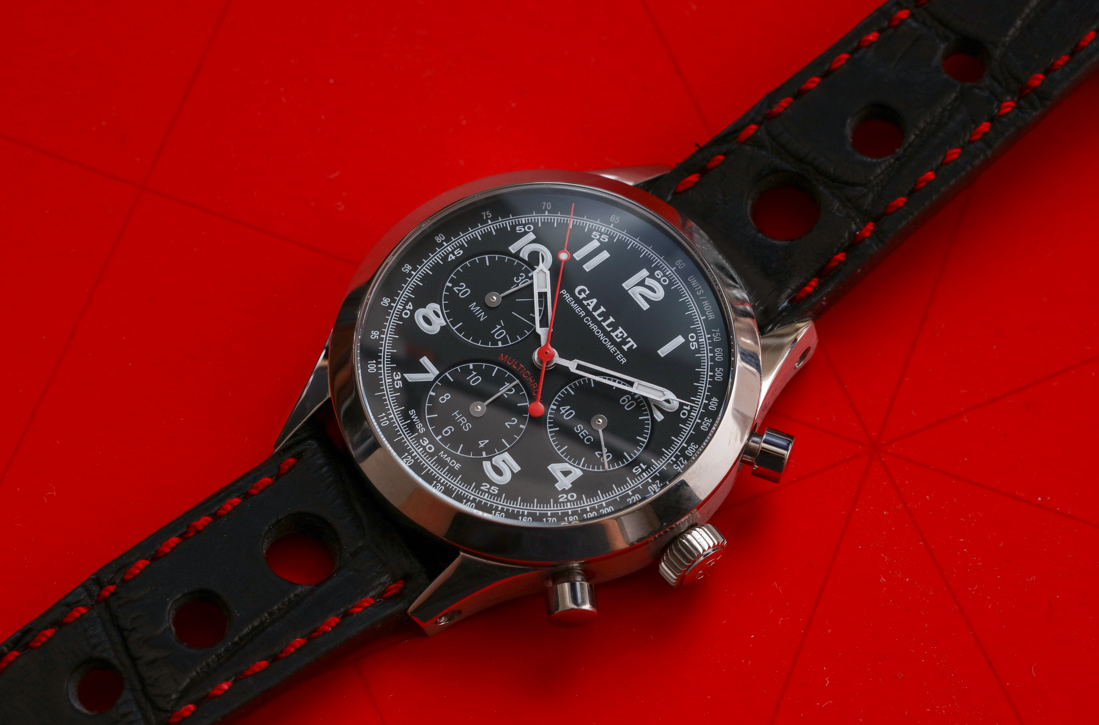 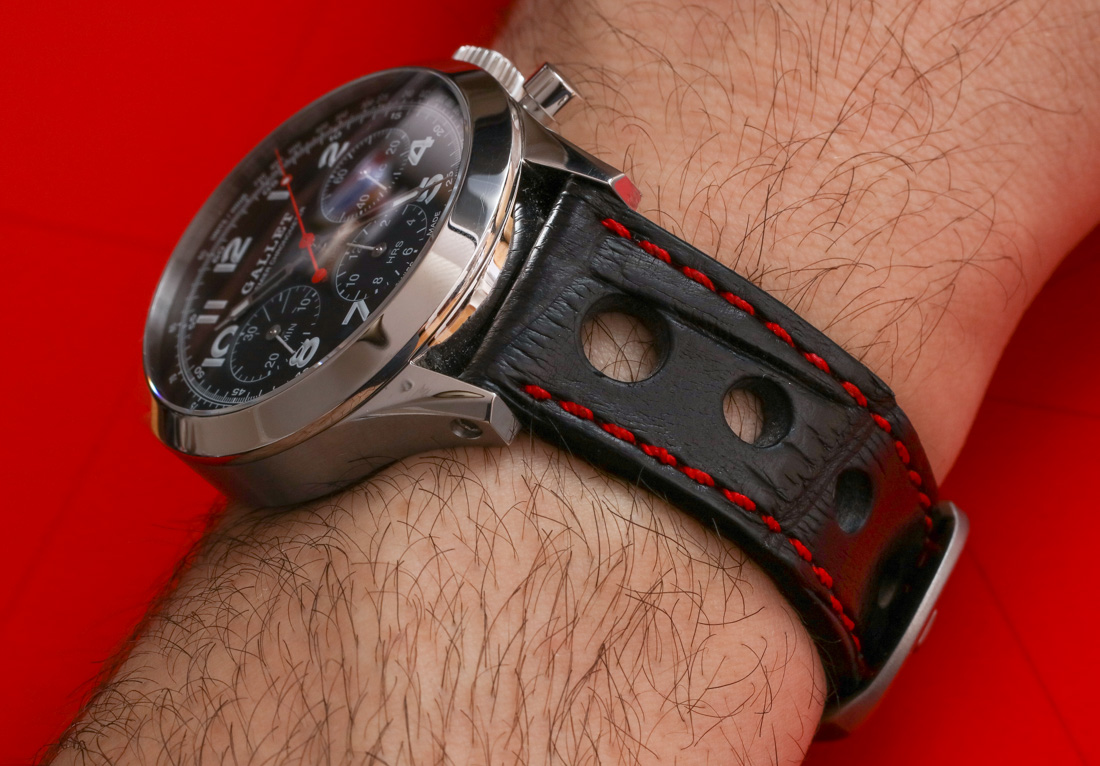 Before talking about the technical details of the Gallet Racing Heritage Chronograph I wanted to discuss the overall experience of wearing it. Is it comfortable? Does it keep good time? How does it look and feel? One of the things that Gallet wanted very much with the watch was for it not to be thicker than necessary. The 40mm wide case is about 13mm thick with a 12-hour chronograph movement inside, which feels good and not too thick at all. Given the modest size, wearing comfort is very high and the overall quality of the case material fit and finishing is excellent. This is one of the few “enthusiast” watches out there of this ilk that in my opinion really delivers when it comes to excellent polishing and finishing on the steel case. 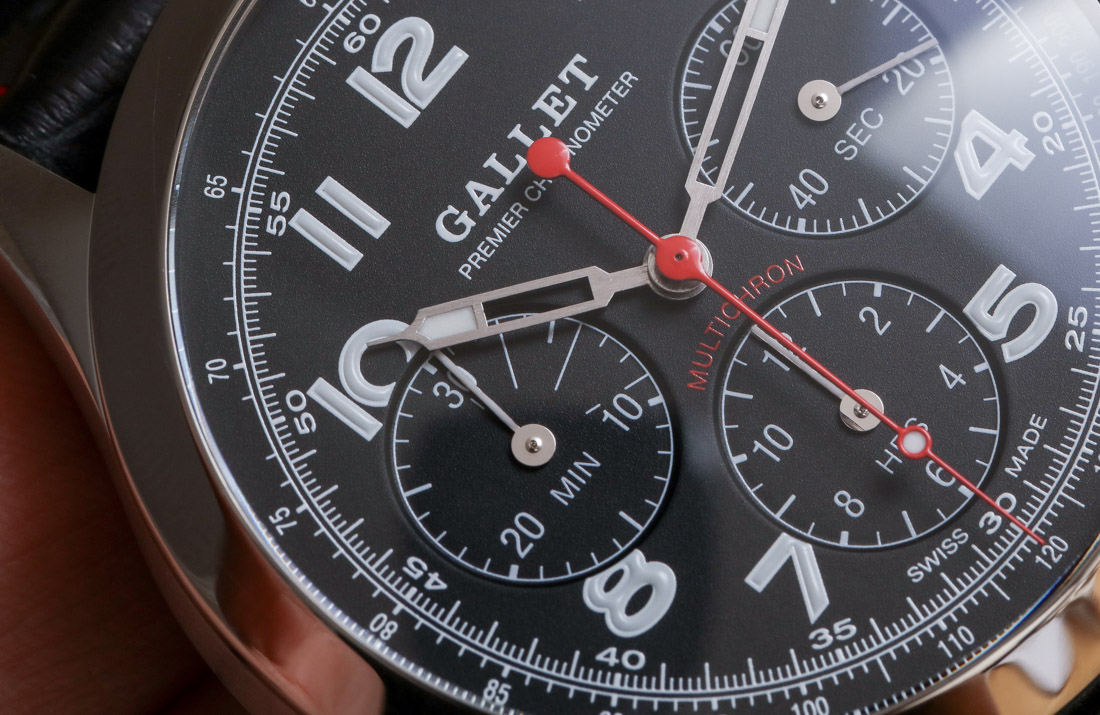 One of the interesting things about Gallet is that if there are problems with an existing product, they will fix it. I encountered two such occasions while reviewing the Racing Heritage Chronograph. When the watch was first sent over it had hands which were polished and really harmed legibility. The hands themselves are already skeletonized in order promote “maximum” chronograph legibility. And in that regard the hand skeletonization succeeded. I was told, however, that light reflecting up from the bottom of the crystal back on the hands was causing the reflectivity that I was noticing, and that this indeed needed to be addressed. So Gallet ordered new hands with different finishing and replaced them on the watch. They offered to do this at no cost for any of the Racing Heritage Chronograph’s customers. 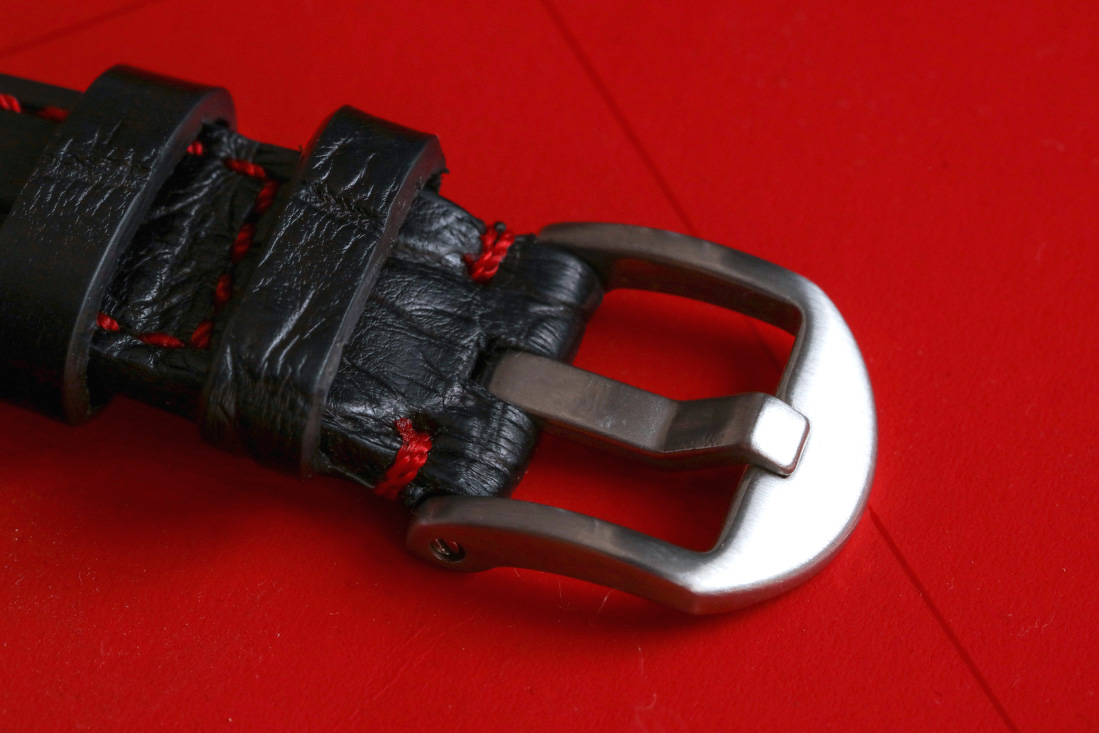 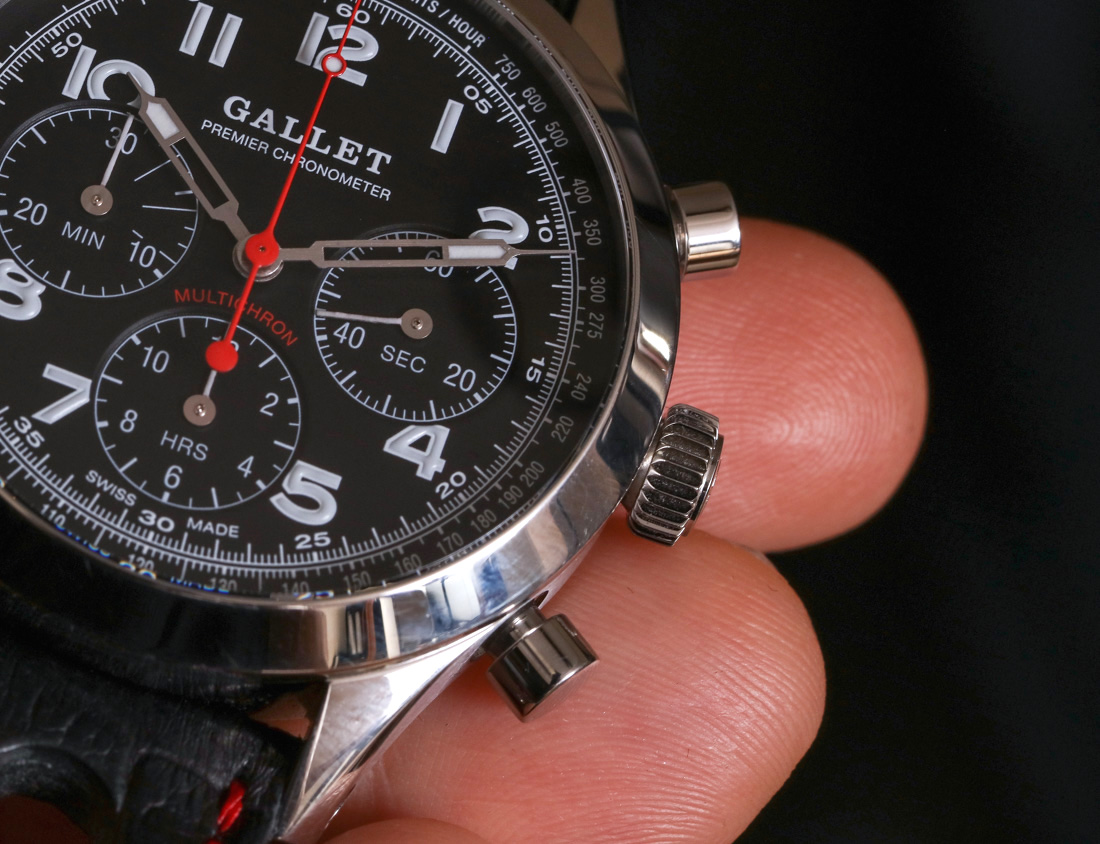 Next, Gallet made a new box for the watch. The initial box was all wood, handmade, and lovely (but it was big). They then designed a second, smaller handmade box that ships with current orders. Gallet claims to have listened to customer feedback and offered a box more suitable to travel. My theory is because Gallet understands how finicky the watch buying/collecting process is, they also appreciate how nuanced the decision making process is for consumers (and react accordingly). This type of dedication to customer satisfaction is rare and almost unheard of at bigger brands.

As the name of the watch implies, it is inspired by Gallet’s auto racing heritage. Now in 2018 Gallet celebrates 100 years of the first “wrist-worn chronograph” for auto racing that they provided. While the design of the Racing Heritage Chronograph hearkens to some of the brand’s later creations (they cite a Gallet MultiChron chronograph from 1965 as the most direct inspiration), in almost all ways the aesthetics of this timepiece are “vintage-inspired.” Having said that, the Racing Heritage Chronograph is a thoroughly modern product in all other respects.

If I had to sum up the core strengths of the Gallet Racing Heritage Chronograph, they would be: 1) excellent case and dial construction, 2) lots of focus on case and movement durability as well as reliability, and 3) a specially tuned and highly accurate mechanical movement tested using an in-house testing process at Vaucher that Gallet has coined “Premier Chronometer.” While the aesthetics of the watch are a matter of taste, no one can deny that Gallet has made a series of impressive achievements in this watch. 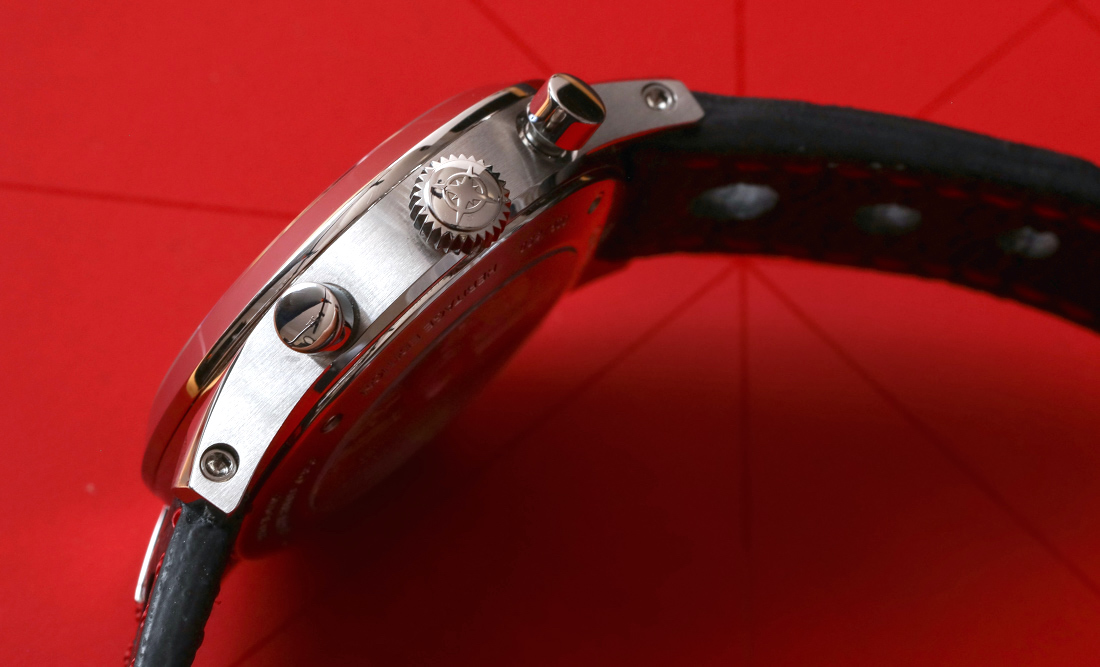 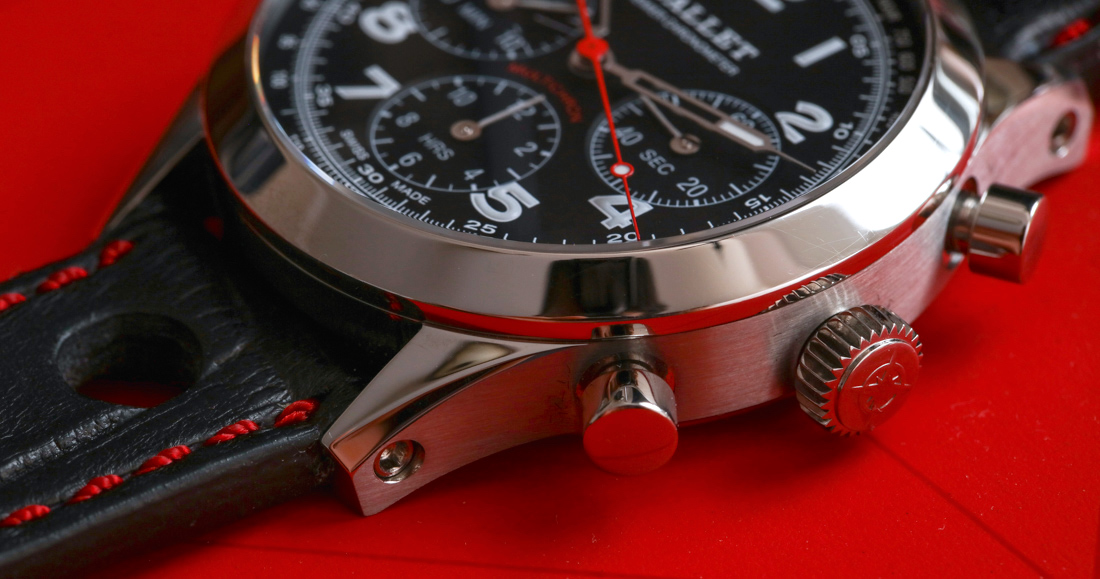 Let’s start by talking about the case construction. As I said, the finishing for the various polished and brushed steel surfaces is excellent. That’s just the beginning. Did you know that the chronograph pushers perform in a very satisfying manner? Neither did I until I actually used the watch. Even little things like pusher action were taken into consideration and it’s hard to find many other mechanical watches that are as satisfying when it comes to playing with the chronograph. The Racing Heritage Chronograph case is water-resistant to 100m without requiring screw-down crowns. Gallet indicates that the crown as well as the pushers were designed with “reinforced architecture” and double O-rings to ensure water and dust resistance. More so, using a non-screw-down system means that the pushers are “always ready,” freeing them from having to be unscrewed if you desire to use them. I will say once again that even if you aren’t strictly using the very legible 12-hour chronograph for timing purposes, playing with it on the Gallet Racing Heritage Chronograph is a tactile pleasure.