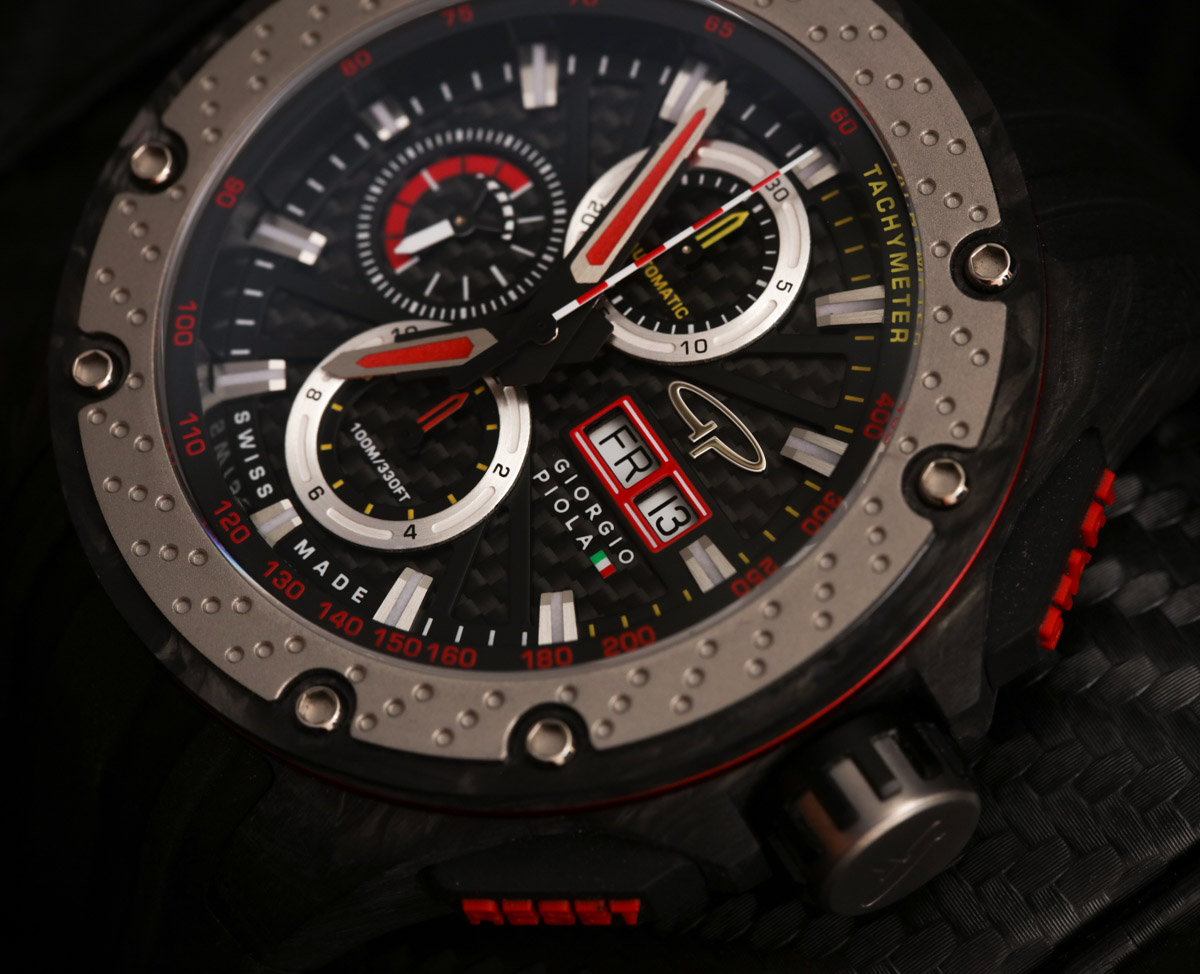 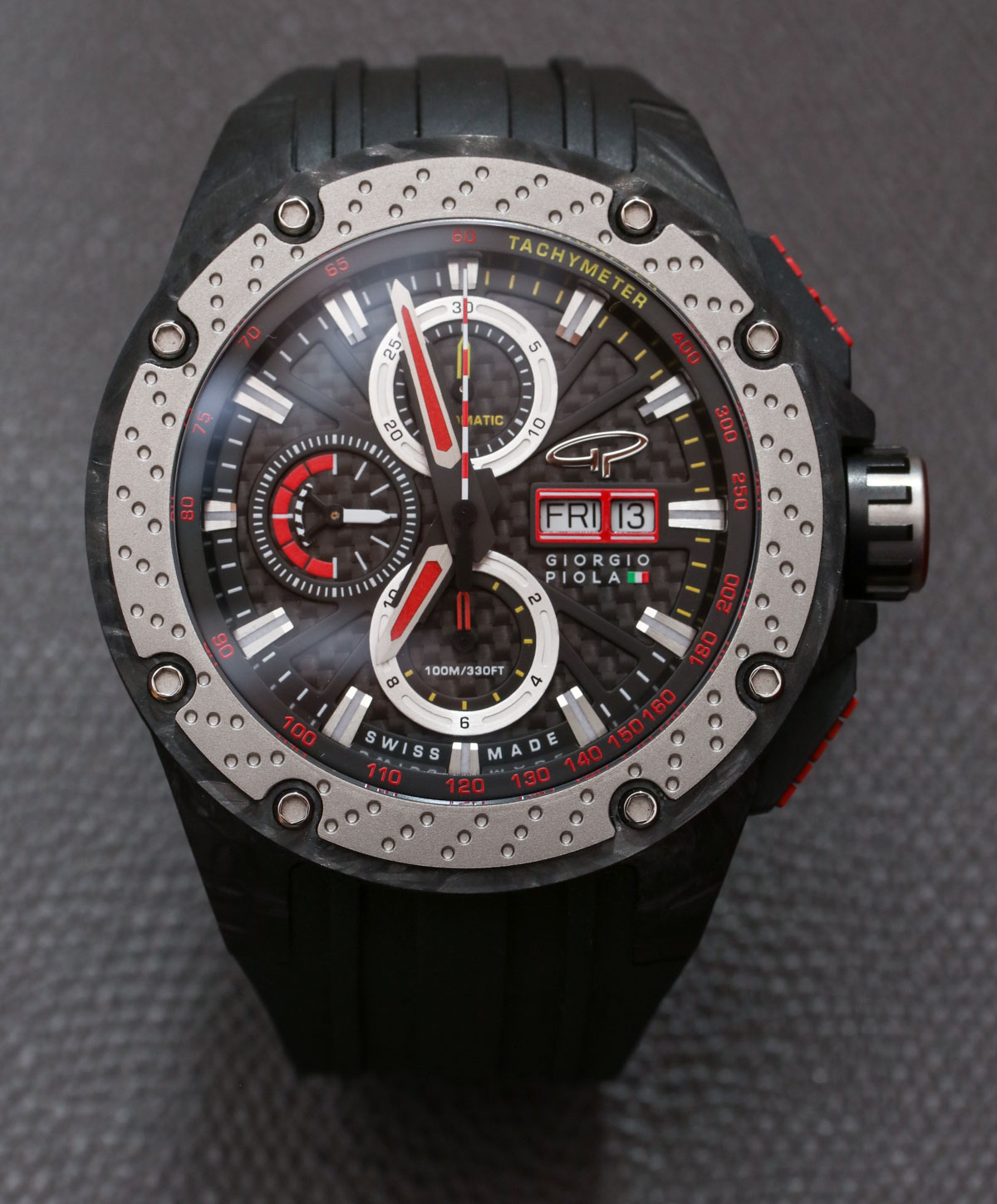 After wearing and testing the Giorgio Piola G5 watch I’ve ended up being really happy with this motorsport-themed mechanical watch bearing the name of a famed automotive illustrator. Italian Giorgio Piola is an accomplished and well-known technical advisor, illustrator, and analyst in the world of Formula 1 racing. For over 40 years he has been surveying the course of technical advancements in the world’s most sophisticated racing cars, and is best known for his beautiful technical illustrations of cars and their components. Now Giorgio Piola has a lifestyle brand propelled by the Motorsport Network that he is involved with. In addition to selling prints of his artwork and some apparel, Mr. Piola has become a watch designer. The Giorgio Piola G5 is his most ambitious timepiece to date. In addition to the mechanical G5, the Giorgio Piola offers the quartz movement-based STRAT-3 timepiece models.

Full of colors and sporting now cliche design elements from all manner of racing vehicles, I was understandably hesitant about reviewing a watch from a new brand when similar watches did little to impress me in the past. While motorsports and wristwatches have an incredibly close-knit history, it requires a good amount of design finesse to merge these two worlds into one satisfying wristwatch. The problem goes back to the design of the watch and whether that design takes visual cues from the world of racing and applies them into a watch, or if a wristwatch is designed in order to exist within the universe of racing equipment and gear – while still solidly being an instrument. The latter watches tend to be more satisfying to collectors such as myself, while the former category can come across as being contrived or at least gimmicky. 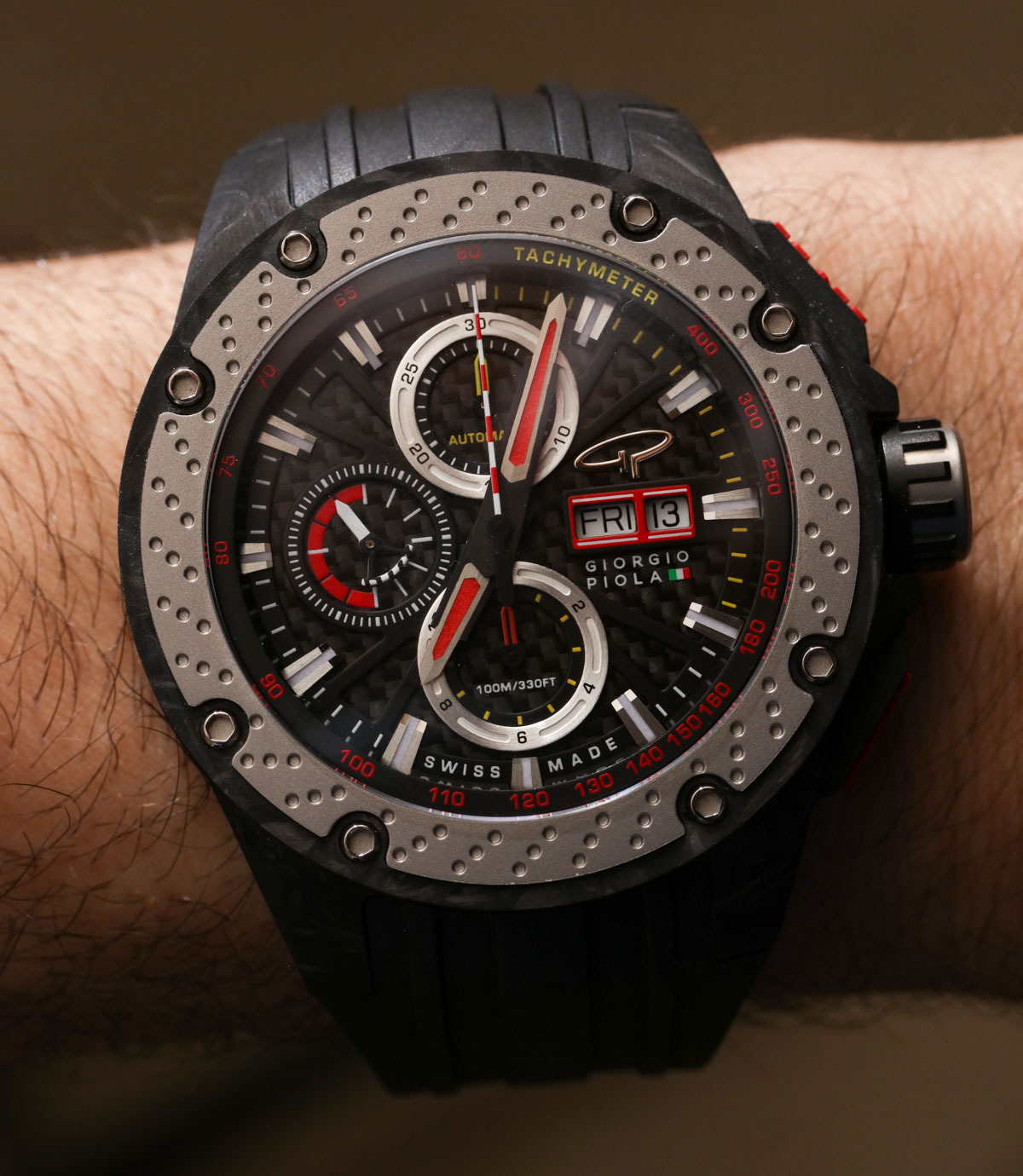 Is the Giorgio Piola G5 gimmicky? Sure, but in a way that I actually ended up liking. The most important thing is that the G5 knows it is a time telling and measuring instrument before it is an accessory to go with the world of Formula 1 racing. It does everything it needs to do in terms of legibility and ergonomics well, and only after that does the design get “painted” with visual themes from the world of racing cars. This only happens when a product is designed by someone who both loves and understands traditional timepieces. If not for that I would likely have a lot less positive things to say about design elements such as a bezel inspired by a disc brake rotor or a dial which is meant to evoke the rainbow-like colors of F1 car steering wheels and instrument panels.

The G5 watch is not perfect, but it is a great first attempt. I will quickly remark on what I feel should be improved in this watch the next time around. I do think this limited edition offering is more than good enough to merit another round of timepieces. I have surprisingly little to complain about with the watch itself. The roughly $3,000 price is ambitious for a new brand, but the Giorgio Piola brand offers a lot in terms of materials, fit & finish, design refinement, and a pleasant wearing experience. The size of the case isn’t for everyone, but for the most part I don’t have any complaints about the watch case and dial. For the “head” of the watch all I can say is that for this price I would have liked a decorated movement. I’ve certainly seen more “basic” forms of the Swiss ETA Valjoux 7750, but I think Giorgio Piola could have upped the ante a bit by covering more of the exposed movement surfaces with decoration. The most compelling part of the movement is the red colored plate on the automatic rotor. 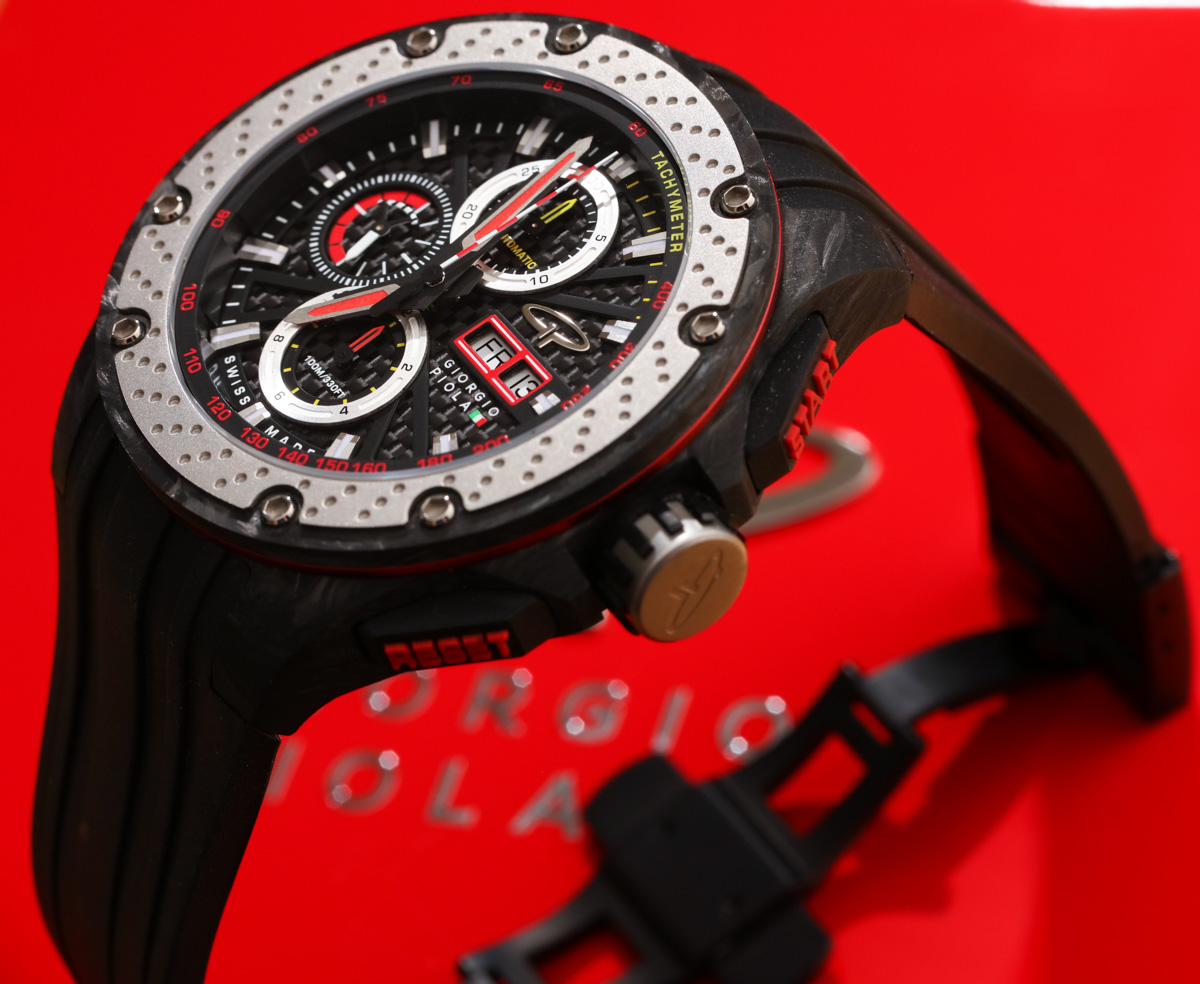 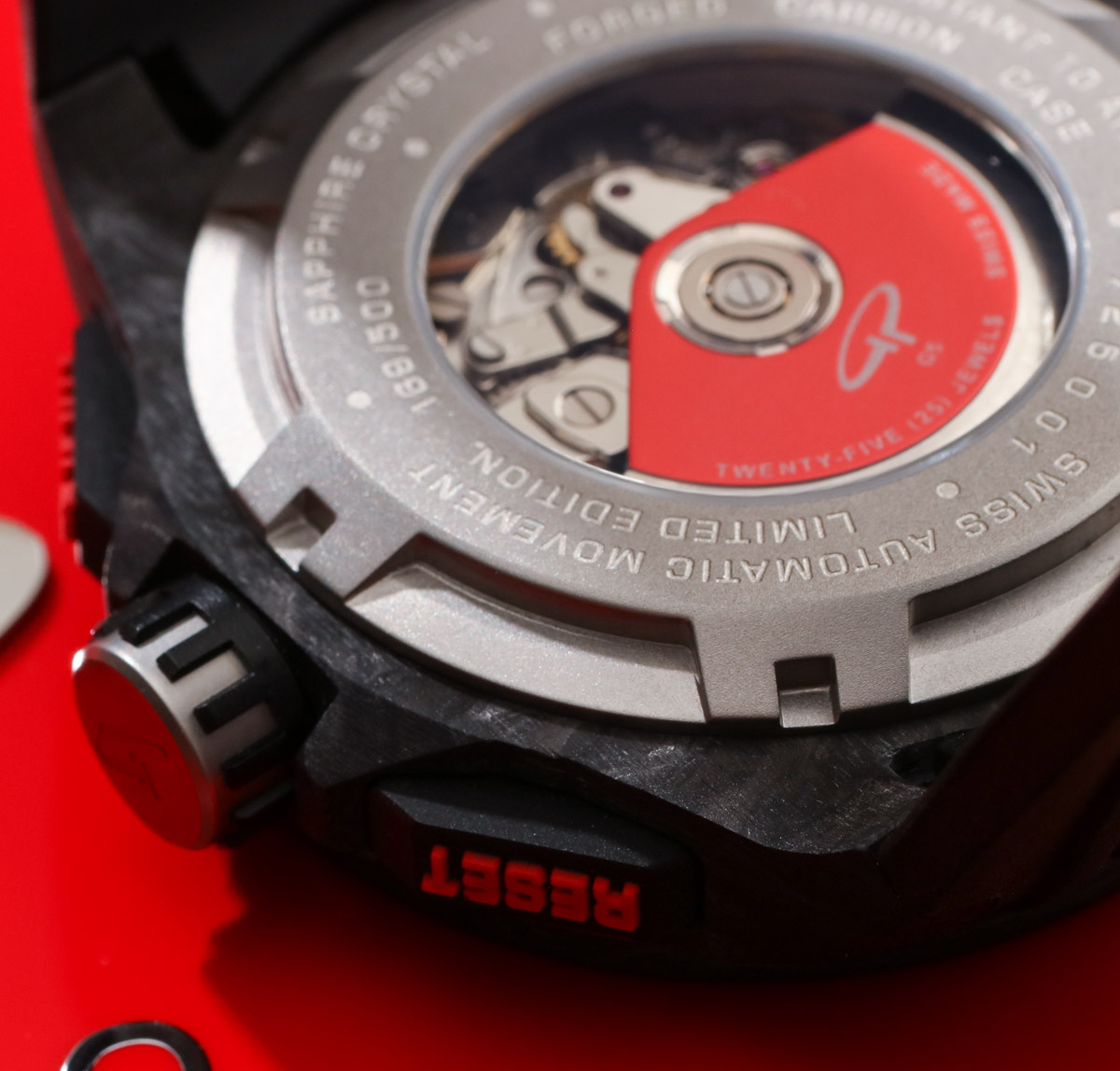 My main complaint about the watch is the strap and buckle. They aren’t unattractive, but I think there could be some improvements. Allow me to explain. The G5 comes on a custom-fitted rubber strap that is of moderate quality (I’ve felt better, but also far worse) which has a nice cohesive fit on the case. To size the strap you need to cut it to size which means you and only you can wear it (unless your family and friends have the same size wrist). So my first issue is that I don’t really like it when the only strap option is one that needs to be cut to size. This also presents a problem for those who want to replace the strap because it means they need to reach out to a small brand to get one, and if they use a third-party strap, it will not have the same tightly integrated look as the special one designed to go with the watch.

The strap closes with a black-colored steel butterfly-style deployant clasp. It gets the job done but is made of stamped metal and doesn’t feel nearly as high-end as the rest of the watch. The deployant also rattles a bit so when you wear the watch, you can sometimes hear the tinny sound of small metal parts hitting one another. This is something acceptable at a lower price level, but in my opinion is something to be avoided when possible at this roughly $3,000 price. The good news is that this issue is easily solved and I’ve made it clear to Giorgio Piola that I recommend they work on some alternative strap and buckle options. Anyone getting one of these watches today could easily change the strap in the future if one were to come out, since it wouldn’t change the watch itself. This situation is by no means the first time we’ve seen an otherwise excellent watch fitted to a strap and/or buckle that doesn’t do it full justice. All else being equal I wouldn’t let the strap prevent me from making a purchase, but I would look to upgrade it if I was going wear this watch on a regular basis. 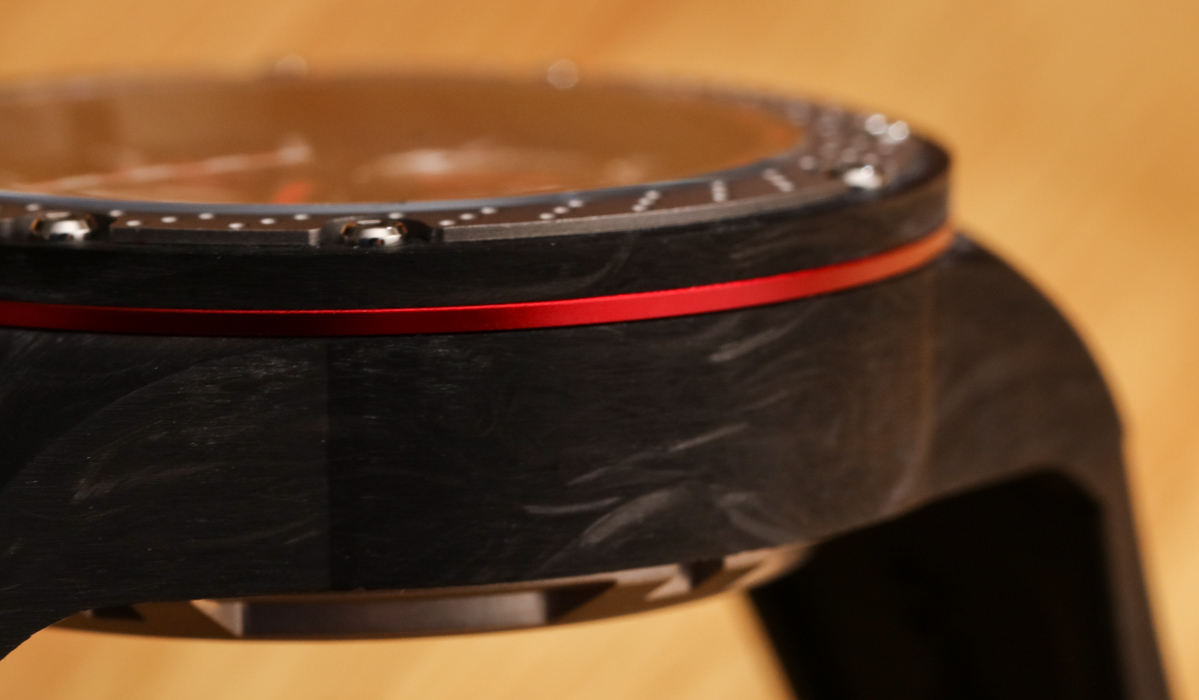 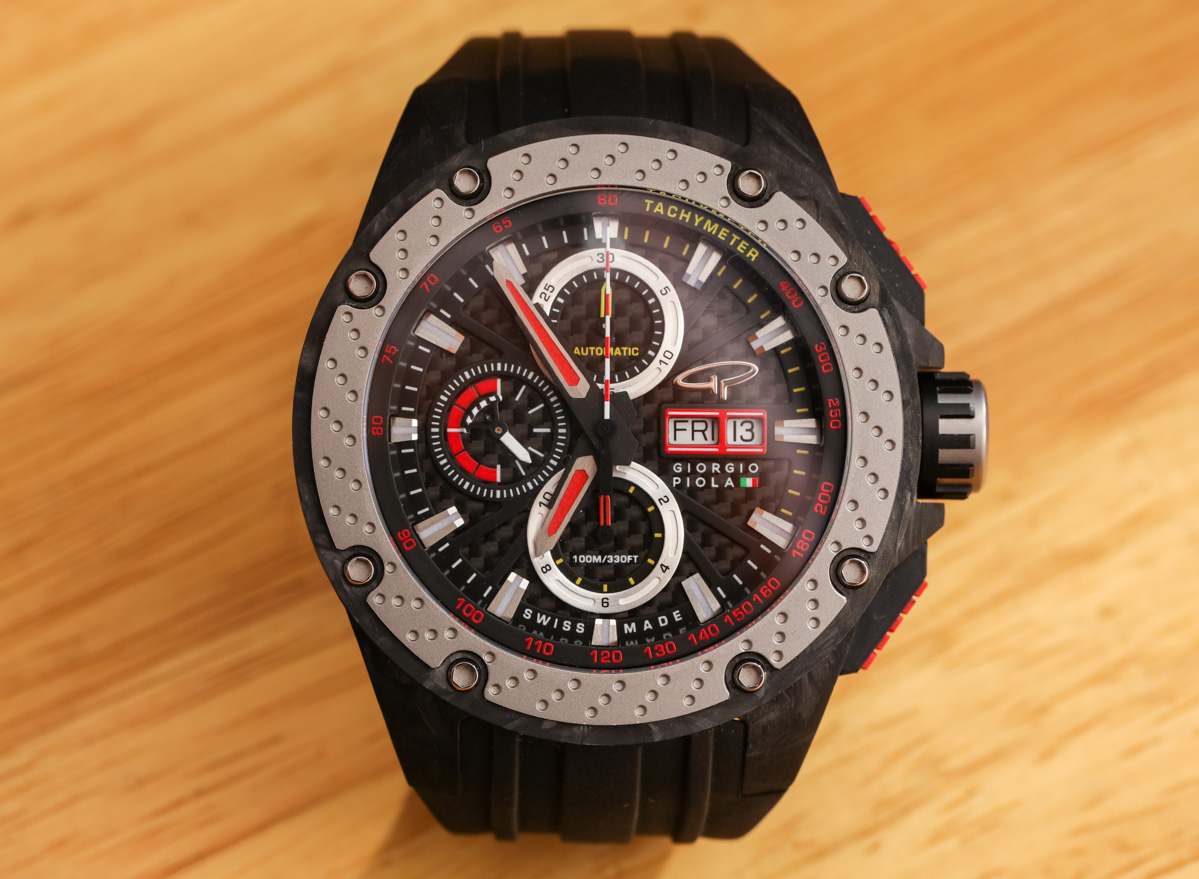 Giorgio Piola is an expert when it comes to the colors and materials of the Formula 1 universe, as well as how race car gauges and instrument panels best operate. I feel a real sense that care and study when into how the colors and materials of the dial worked together not only to evoke a thematic F1 look, but also to promote legibility. The dial first impresses me by having only matte surfaces and a flat AR-coated sapphire crystal that does not really create glare. Virtually, the only semi-shiny elements are the applied hour markers and chronograph rings. The only really shiny element is the small Giorgio Piola logo – which by contrast allows you to appreciate that nothing else on the dial is that reflective.