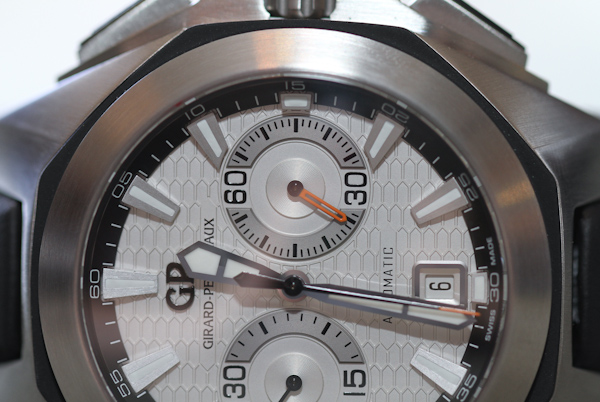 We recently took a hands-on look at the new and updated Girard-Perregax Sea Hawk watches. While that was a refresh of an existing model this new Chrono Hawk is something totally new. Well, sort of. Girard-Perregaux was once quite strong in sport watches, but seemed to focus more on classic-style watches the last few years. A new emphasis on Western markets such as Europe and the US has led them to once again focus on sport watches, which have typically been great with their name on it. With collections such as the famed Laureato no longer being made, the “Hawk” watches will be the brand’s new sporty bread and butter. You can once again read where we debuted the new Girard-Perregaux Chrono Hawk & Sea Hawk watches here on aBlogtoWatch.

Instead of embed my interview with Girard-Perregaux CEO Mr. Sofisti again, I will simply link to it here on the aBlogtoWatch YouTube channel. There you can see some video of the Chrono Hawk watches and listen to more details about them from the brand. While technically a large sport watch, these chronographs are much more congenial in their feel when compared to the Sea Hawk. While they have quite similar cases a technical difference between the two is that the Chrono Hawk is water resistant to 100 meters and the Sea Hawk is water resistant to 1,000 meters. A difference that will mean next to nothing for most of you. 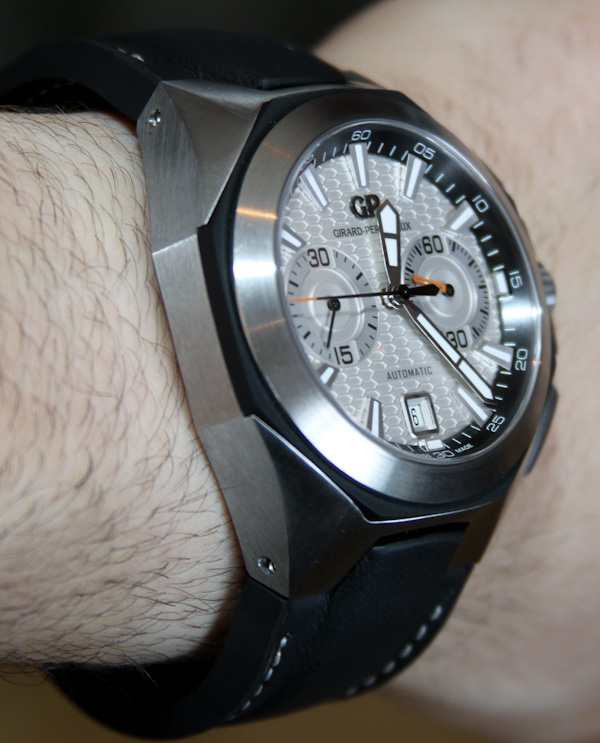 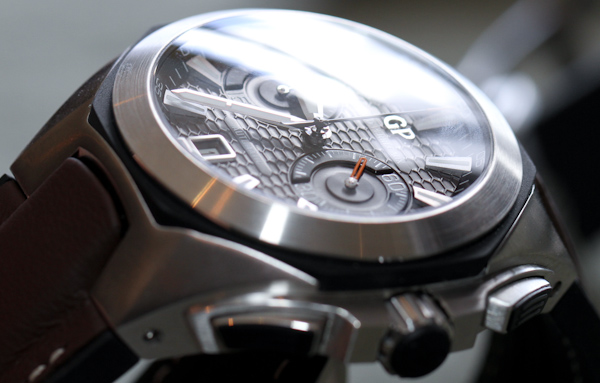 The Girard-Perregaux Chrono Hawk is 44mm wide in an angular steel case that also mixes cues from the older Laureato models as well as the former generation Sea Hawk. However, there are some new things as well. First are the case curved chronograph pushers that remind me a lot of the new pushers on Audemars Piguet Royal Oak Chronograph models. There is the black rubber ring between the case and bezel, as well as black rubber trim throughout.

Unlike the rotating diver’s bezel of the Sea Hawk, the Chrono Hawk as a smooth brushed steel bezel. I have to say that I really like that Girard-Perregaux decided against putting a tachymeter in the design somewhere. A lot of sport watches do this and I am really happy to see that they resisted. Though the back of the watch you can see the movement and neat looking new automatic rotor design. 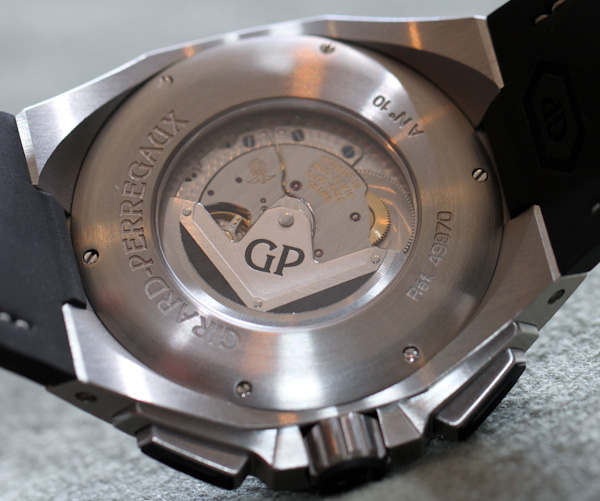 While the dial is heavy of decor and style, it is minimalist when it comes to features, especially for the chronograph. Just a very straight forward 30 minute chronograph with an adjacent subsidiary seconds dial. The stretched honeycomb texture on the dial is the same as on the Sea Hawk. Girard-Perregaux will offer the Chrono Hawk dial in both a silvered and gray color. Orange colored accents mark the chronograph hands.

The dial, especially flange ring, aren’t nearly as dramatic as those on the Sea Hawk. I personally prefer the Sea Hawk but a lot of people I have spoken with prefer the Chrono Hawk. I am however a fan of the piece’s high legibility as well as symmetrical dial design. It doesn’t necessarily feel very classically “GP,” but then again no one said it should. I will reiterate my feelings about the design of the 44mm wide case. It is overall interesting and most certainly sporty, but with very long lugs it simply doesn’t site well on smaller or even medium wrists. 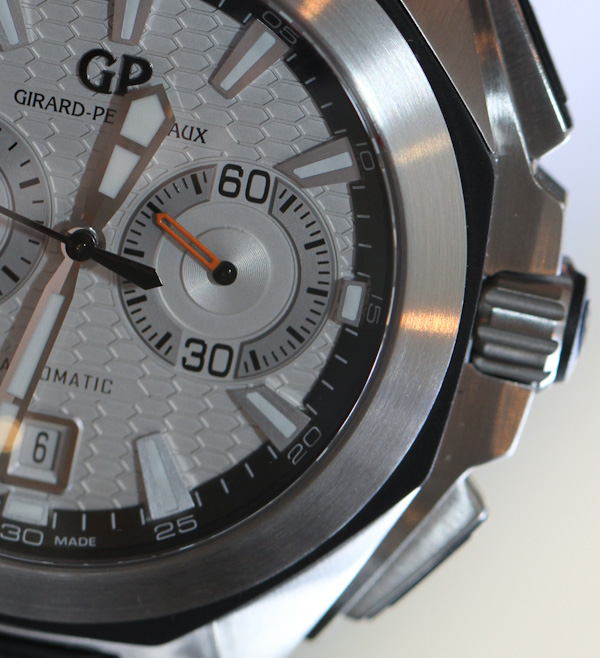 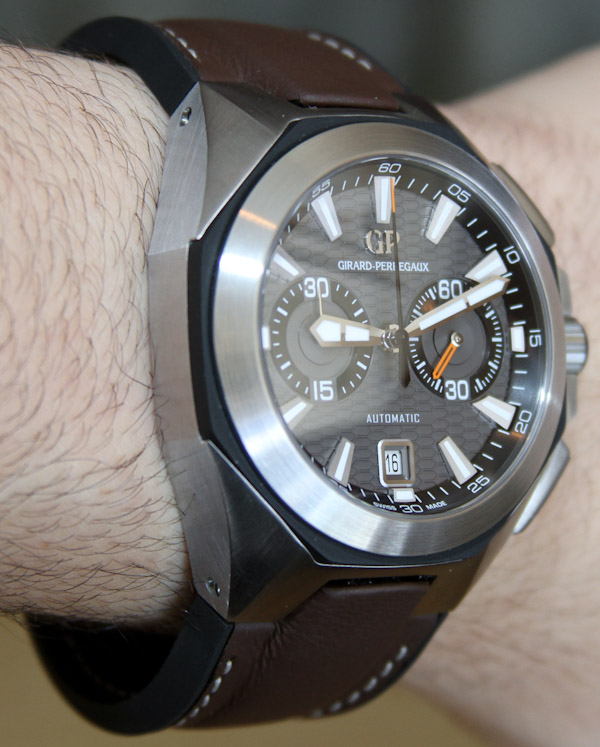 Girard-Perregaux was very excited to discuss a new upcoming in-house made integrated chronograph movement for larger watches. Right now they simply don’t have one of those. While it is true that Girard-Perregaux is a stellar movement maker, the Chrono Hawk has movement which is sort of half GP, and half not. Girard-Perregaux marks the movement in Chrono Hawk as the GP3300. That is simply their base automatic movement. The Chrono Hawk’s movement gets a chronograph model made from the wonderful movement module maker Dubois-Depraz. I have nothing bad to say about their stuff as they make modules and parts for most all of the world’s best Swiss watch brands.

For me a chronograph is a more complex tool watch meant for measuring sports rather than engaging in them. The Sea Hawk wins out in terms of looking like it can survive anything. Gentlemen will however likely gravitate more toward the new Chrono Hawk. It is by no means a “formal dress” watch, but it is more elegant in its stance and persona. Attached to the Chrono Hawk is rubber mixed with leather strap in two colors. Look for these soon and more Girard-Perregaux sport watches to come in the future.