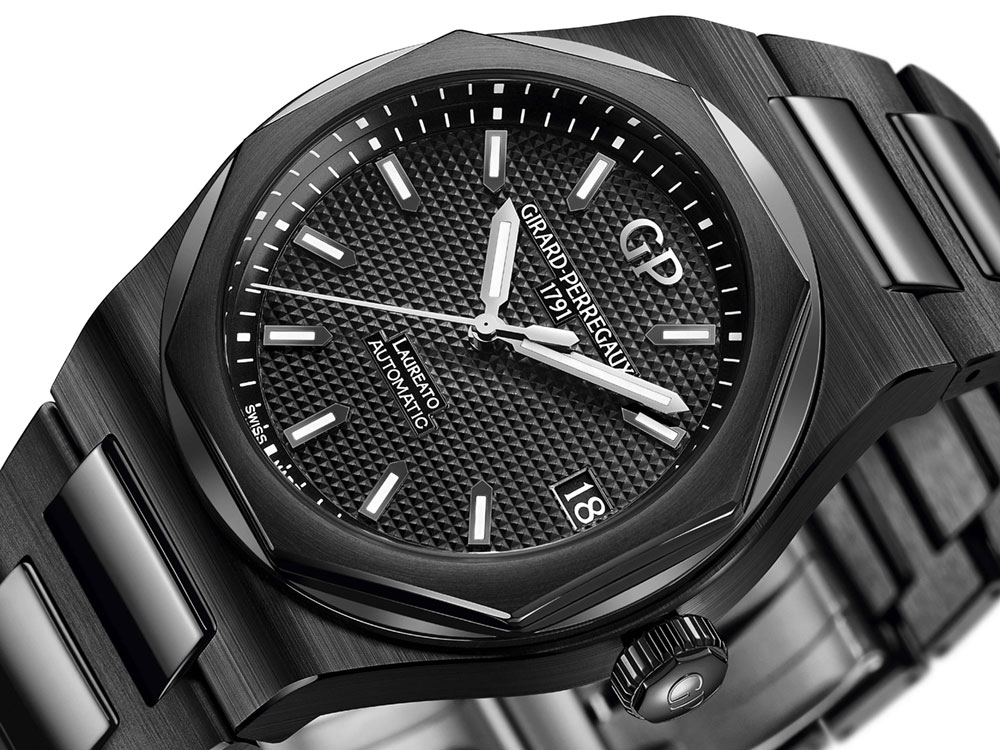 The new Girard-Perregaux Laureato 42mm Ceramic (reference: 81010-32-631-32A) is an unexpected but welcome development, not simply for the Laureato but the octagonal luxury watch segment – I guess we could say there is such a thing. The Laureato had its phoenix moment when it rose from its ashes in early 2016, slightly re-designed and re-launched through a wide variety of case size, material, and color combinations. At present, the all this new-found black unscratchableness comes only in 42mm, but we are told a 38mm version and another 42mm version are coming at SIHH 2018. 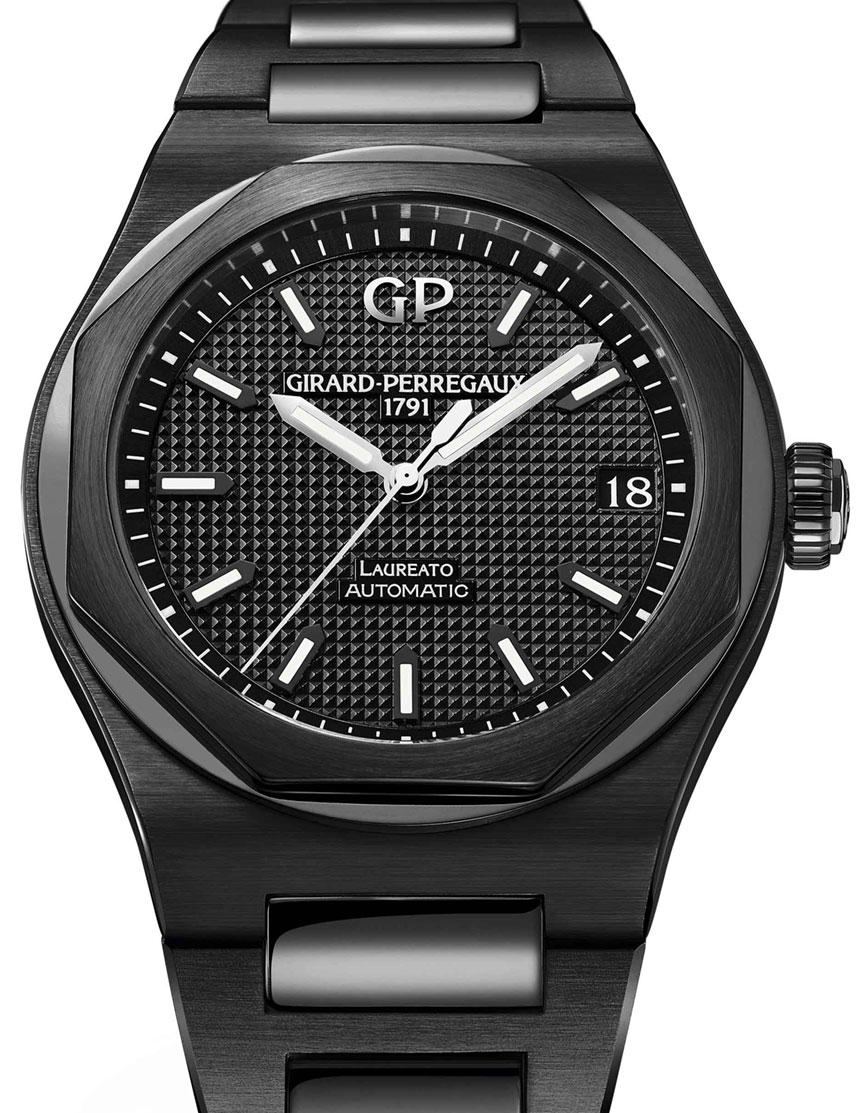 Truth be told, I have for long been wondering why more of the usual suspects in the aforementioned octagonal luxury watch gang are yet to be launched in ceramic – the Nautilus, the Octo, and the Royal Oak have not at all, or only partially embraced this material, and even though that changed in January with the Royal Oak perpetual calendar in ceramic (hands-on here), with its complexity and over $93k price tag that hardly means a big step towards embracing this material.

The original Laureato from 1975.

The Laureato is a come-and-go member of the aforementioned gang, as it was launched in 1975 – that was three years after the Royal Oak, but a year before the Nautilus or the IWC Ingenieur even existed. Since then it has been discontinued, re-designed, and re-launched a few times over the last forty or so years. Many fans of the more established collections (understanding it’d be unfair to call all of them snobs I refrained from doing so) sneer at the Laureato, failing to acknowledge the fact that at the time of its launch GP had the balls to jump into this segment before the others – and hadn’t hired Genta to help them out in the process. On this note, the only official information that I could find from Girard-Perregaux is that they trusted an Italian architect to do the research and design for the Laureato, but they don’t mention him (her?) by name. 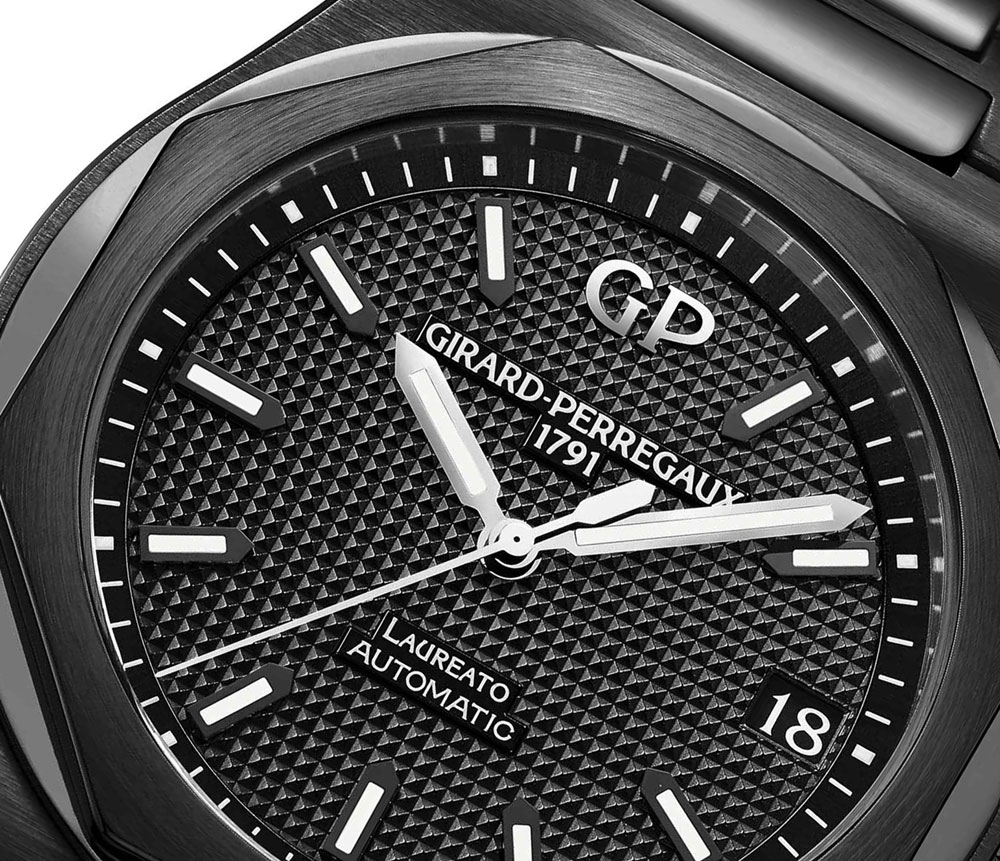 All this is to say that the Laureato is in a difficult position these days: had it been around continuously for forty-something years, I don’t find it a stretch saying it would enjoy much wider acclaim. The best form of defense is offense, as they say, and it appears they know that at Girard-Perregaux as well: right now the Laureato 42mm Ceramic is the only piece in its segment that comes in black ceramic, proving that the elegant octagonal front and cool bracelet combo does work in black, not just in steel or gold. A lesser known fact as far as black editions are concerned is that AP did produce two steel, black PVD-coated grand complications about ten years ago (with prices presumably close to seven figures), but these came on a strap, not a black bracelet. 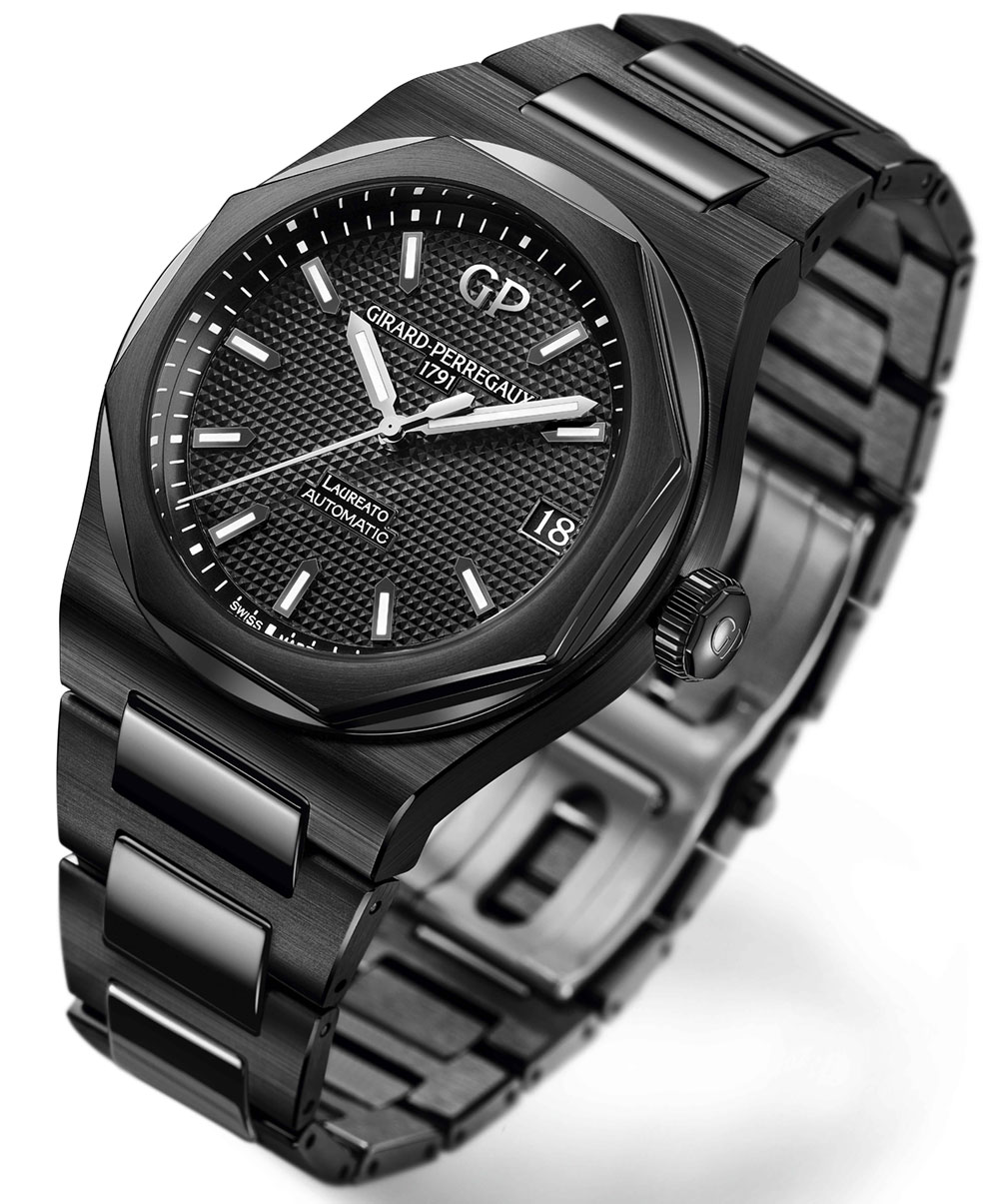 Weirdly, this black look is a new thing in the segment that forty years ago gained traction exactly by pushing the limits of what luxury watches could look like and, frankly, it would be about time that the others (Patek, Audemars Piguet, etc.) acknowledged this fact and surprised us with some properly new and bad-ass looking black versions of their watches… and when they do, we’ll know that AP’s timid first try was closely followed by Girard-Perregaux’s move.

Turned into black ceramic, the Laureato’s case and bracelet design remains largely unchanged apart from the fact that the clasp became a bit wider and the links of the bracelet now have holes in every link up to the case, unlike the steel ones that could be disassembled only from the first 5 links down. Fearfully aware of the fragility of ceramic, this may actually be a neat and thoughtful detail that will theoretically allow a clumsy or just plain unfortunate owner to replace just a few links near the case, as opposed to getting ripped off for an entire replacement bracelet. 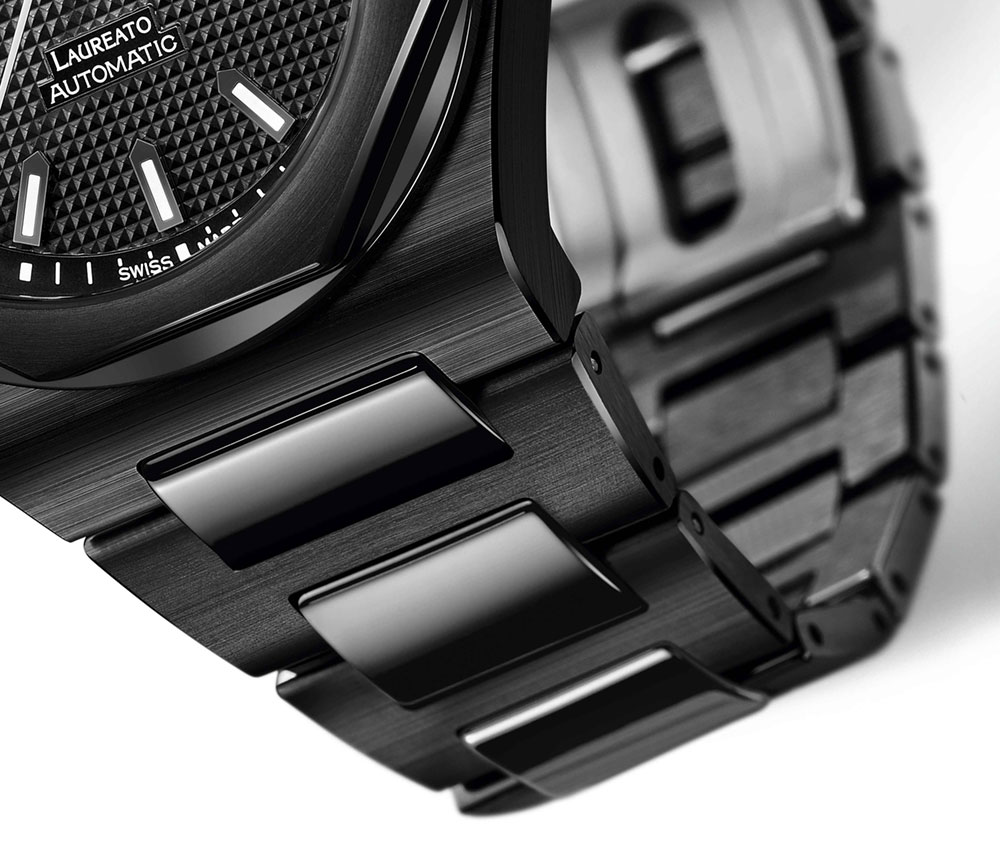 All external components are ceramic, including the triple-blade ceramic clasp, but the quality and attention to detail in executing the ceramic parts’ finishing we’ll have to assess in the metal (ahem). What is immediately apparent, though, is how a nice variety of different finishing techniques have been applied as satin, brushed, and polished surfaces meet across the bezel, case and bracelet. 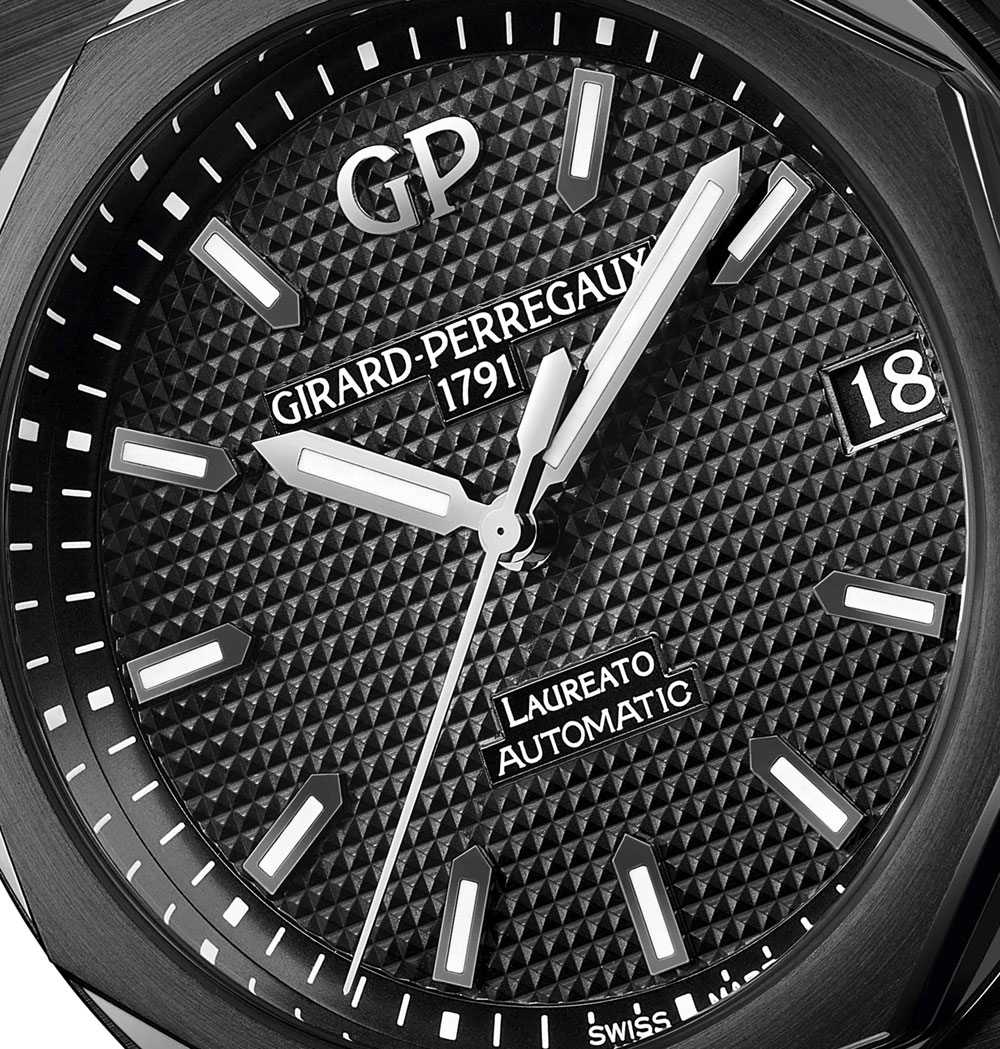 The dial is black too, clearly, which really isn’t the most creative solution – having launched the Laureato less than two years ago with so many references, this is a bit of a dropped ball, as the black dial, black case combination does look and feel a bit dated. Swapping in one of the rather glorious blue dials from another 42mm model shouldn’t prove difficult though. Nevertheless, the hobnail dial should give enough contrast against the nicely proportioned and generously sized main hands, so legibility shouldn’t be too bad – looking forward to checking that out live along with all the other details. 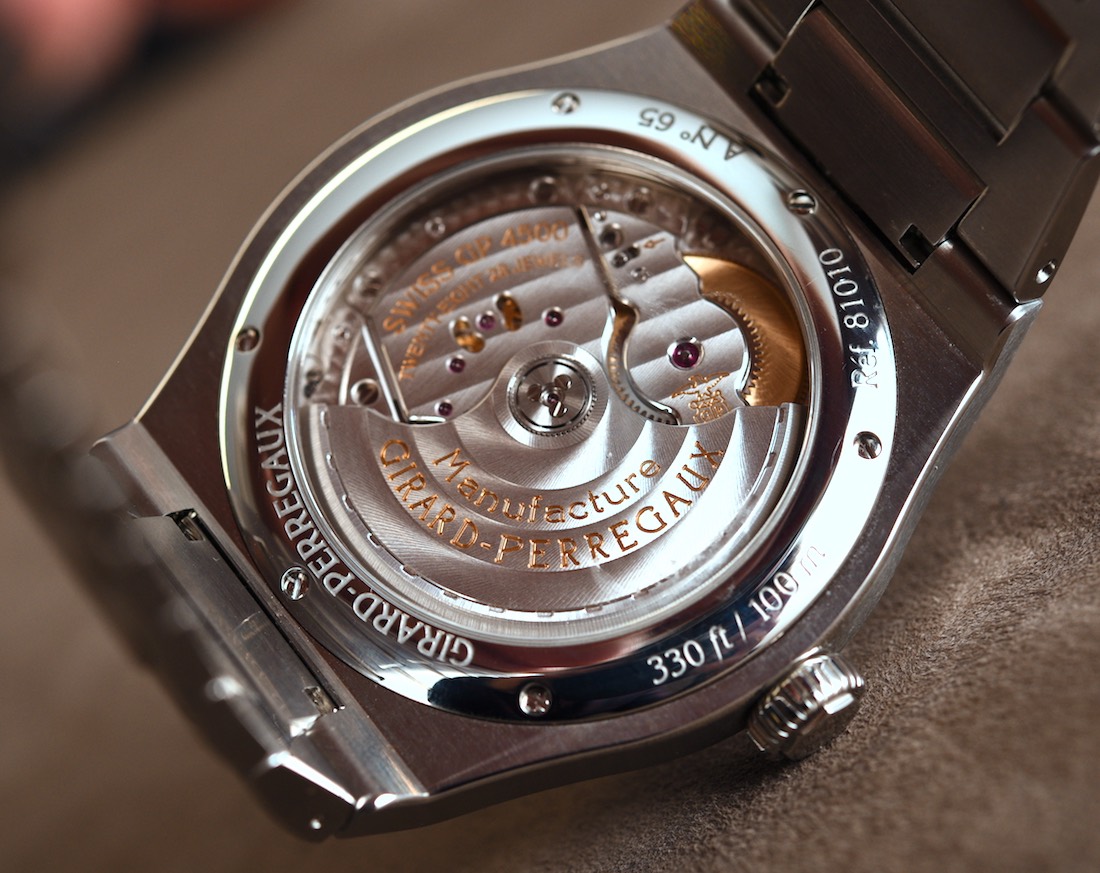 The movement inside the 42mm wide and slender-ish 10.90mm thick case is the GP01800-0025 automatic caliber, which was designed to be a larger, but widely usable caliber that finally allows Girard-Perregaux watches to boast a basic in-house movement in larger cases, hence moving the date display neatly towards the edge of the dial, where it actually belongs. The GP1800 (as it’s also called) runs at a modern 4 Hertz and still provides 54 hours of power reserve and is on display through a “smoky sapphire” case-back – which usually just disturbs the view at the movement, but hey, we won’t judge until we see it hands-on. Should you wish to see an open-worked version of this caliber (who wouldn’t?), then check out the 1966 Skeleton hands-on here. 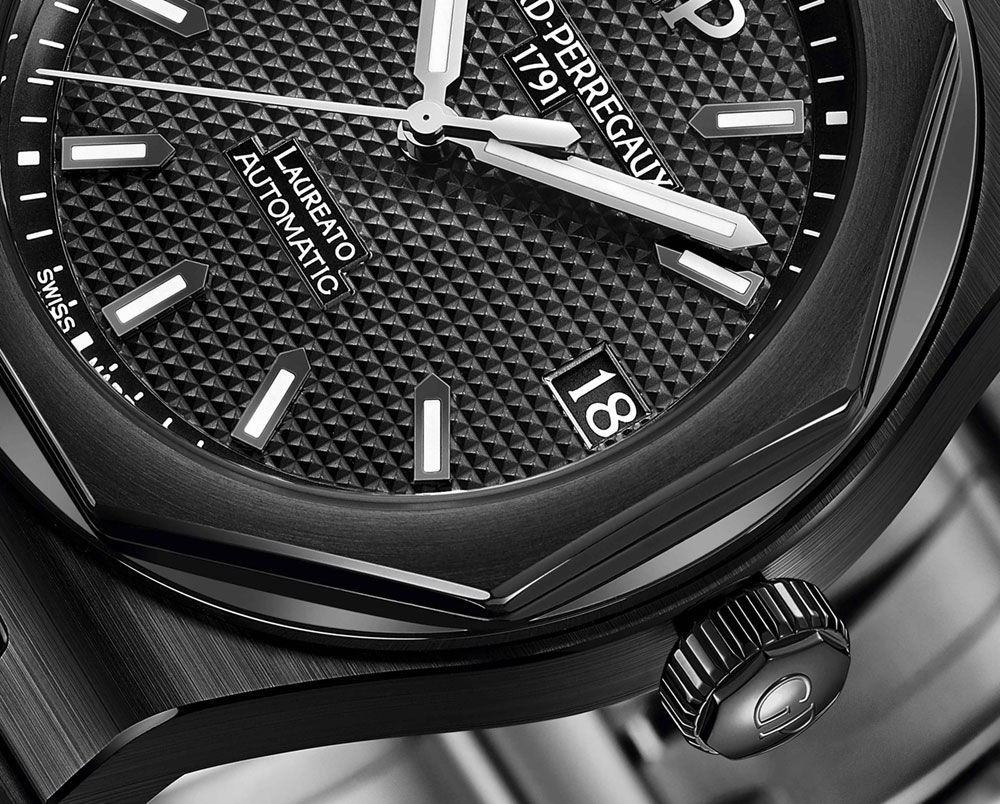