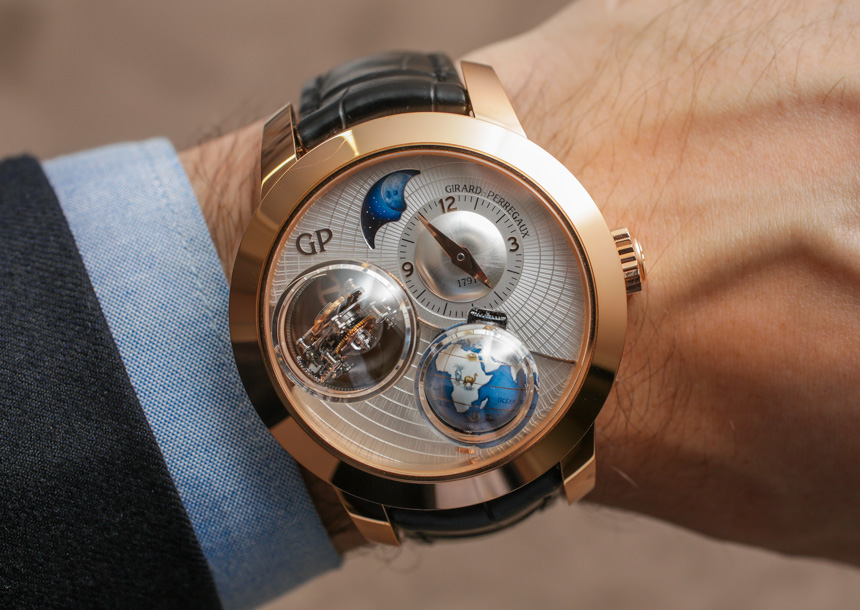 Girard-Perregaux describes the small, hand-painted globe (so large it needs a bubble in the sapphire crystal) as being a miniature representation of a map from the 17th–18th century. That’s a pretty big spread of time in the world of cartography, but I think even the brand can agree that a timepiece such as the Girard-Perregaux Tri-Axial Planetarium would have felt very much at home back then. 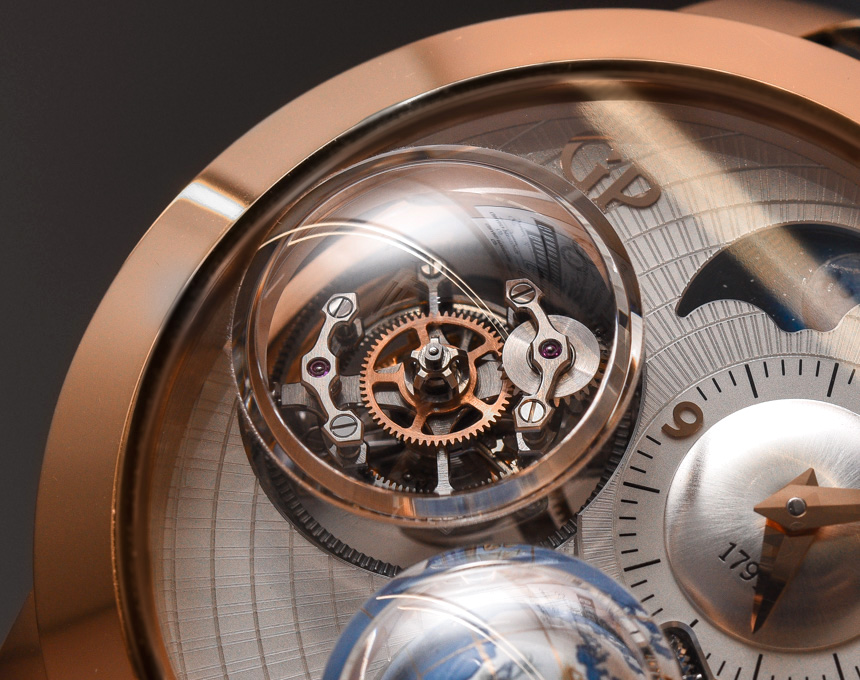 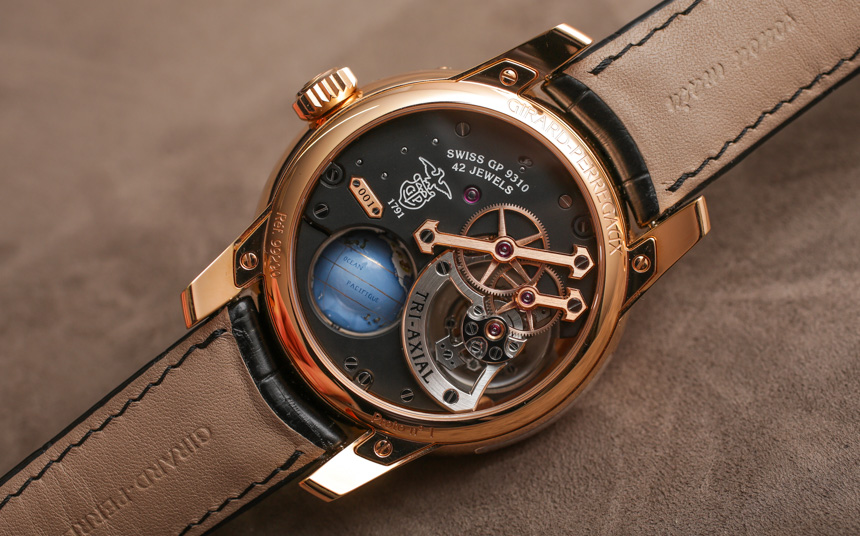 Imagine a time when the tourbillon itself was patented by Mr. Breguet back at around the end of the 18th century. Now imagine a tourbillon that spins on not one axis, or two, but three. The Girard-Perregaux Tri-Axial Tourbillon is indeed one of the few triple axis tourbillon watches out there. The very first of these species I recall learning about was the Triple Axis Tourbillon from Thomas Prescher. A triple axis tourbillon is extremely complicated to engineer, and a huge endurance and patience challenge to assemble. These watches are extremely rare because their expense to make and cost to buy ensure production numbers are low. No, the three axis points of spinning for the tourbillon do not add any performance value – no more than the first or second axis points. 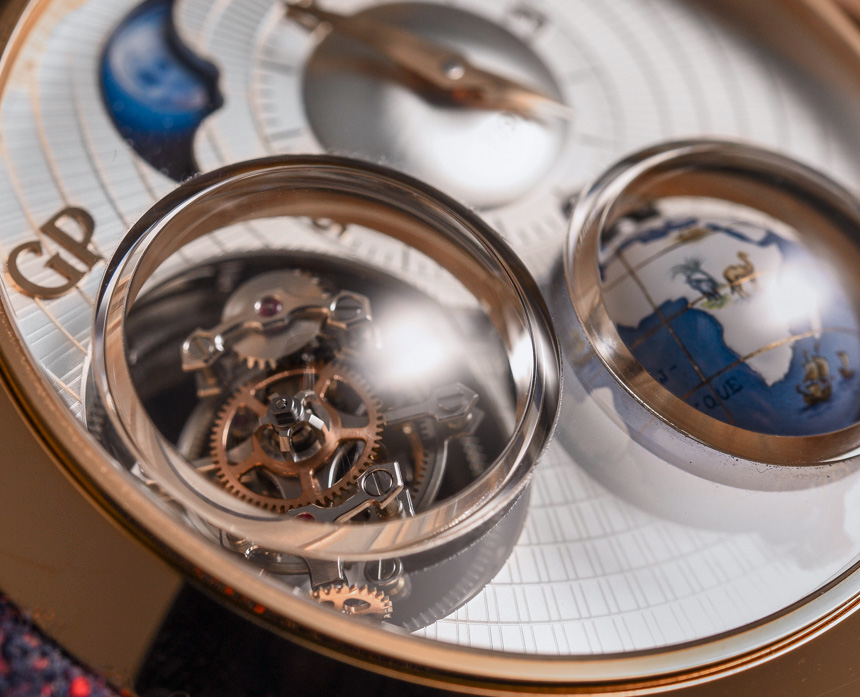 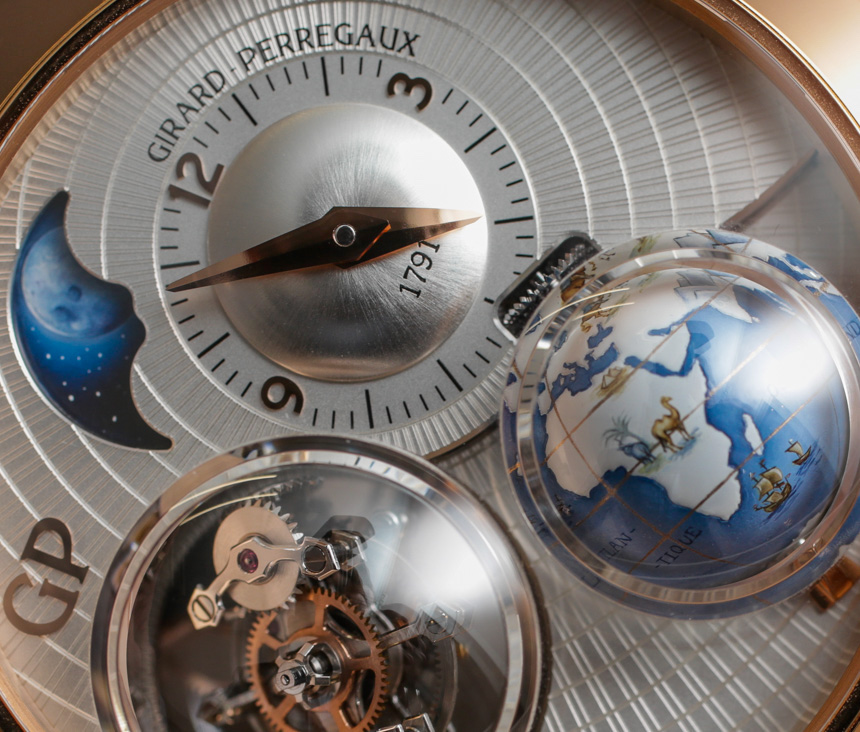 Tourbillons were designed to solve a problem in clock or pocket watch movements that wristwatch movements do not have. The execution of a tourbillon in a wristwatch movement is a pure exercise in the art of craftsmanship. It looks beautiful, but doesn’t actually make the product better. It certainly does make the object more valuable though. 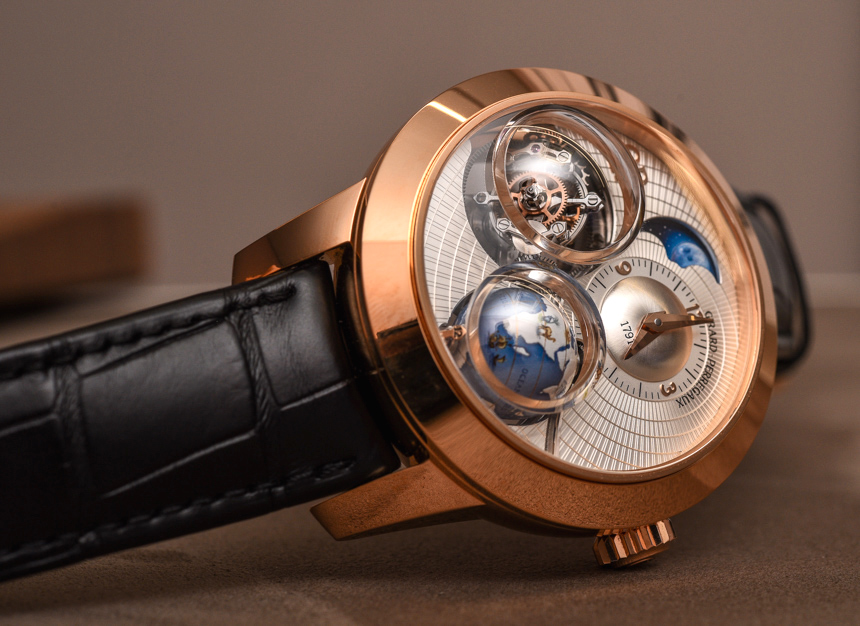 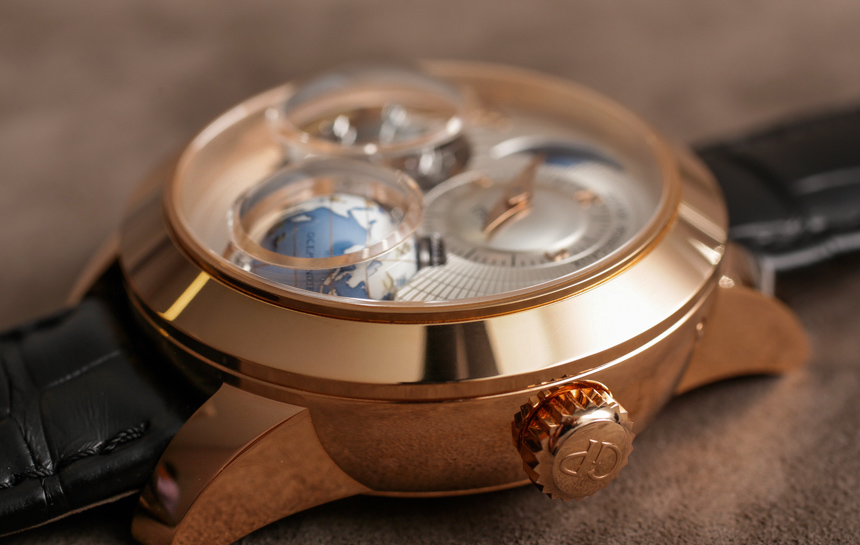 Girard-Perregaux’s original Tri-Axial Tourbillon (aBlogtoWatch hands-on here), has a cool movement in a watch that’s not particularly pretty-looking. The Tourbillon part of the name was removed for this reference 99290-52-151-BA6A Tri-Axial Planetarium version (which doesn’t include what you might normally associate with a planetarium). I’m pretty sure a planetarium is a visual representation of celestial bodies, especially in relation to one another. This watch does feature one planet though – Earth (and its moon – just not in relation to one another). Girard-Perregaux indeed improved on the design of the Tri-Axial Tourbillon with the Planetarium – with a decidedly much better looking timepiece. The elegant subsidiary dial to indicate the time really helps, and the various blue hues from the painted Earth to the moonphase indicator are eye-pleasing. The overall design still has some quirks though (like the background texture of the silver-colored watch face) and the case, which has large sapphire crystal bubbles that simply aren’t going to be to all mega-wealthy watch collectors’ tastes. 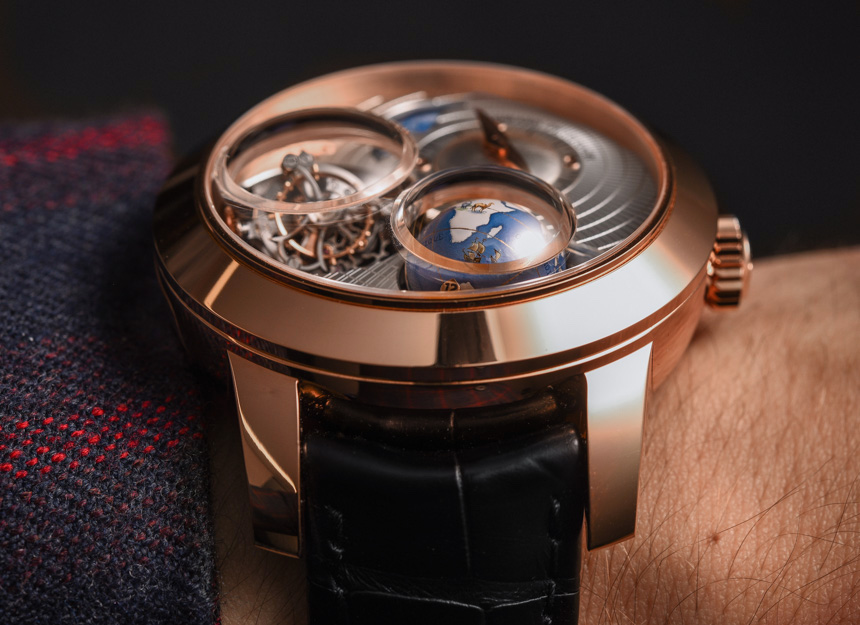 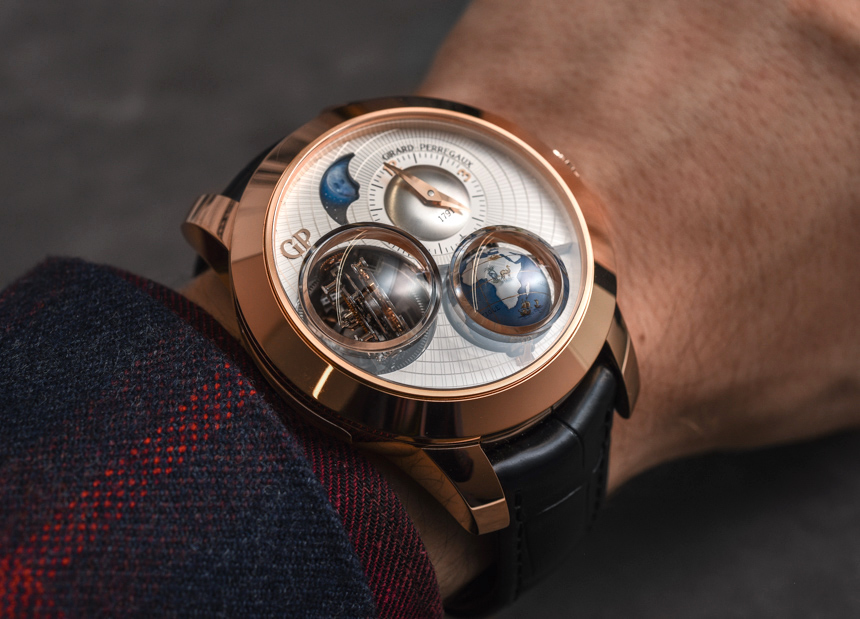 If the Tri-Axial Planetarium watch looks big, that is because it is 48mm wide and 21.52mm thick with the domes. The 18k pink gold case is predictably weighty on the wrist, which is what you’d expect in a watch like this. Girard-Perregaux does its best to keep the overall case proportions classic, so it really tries to be modest-looking in its visual heft. 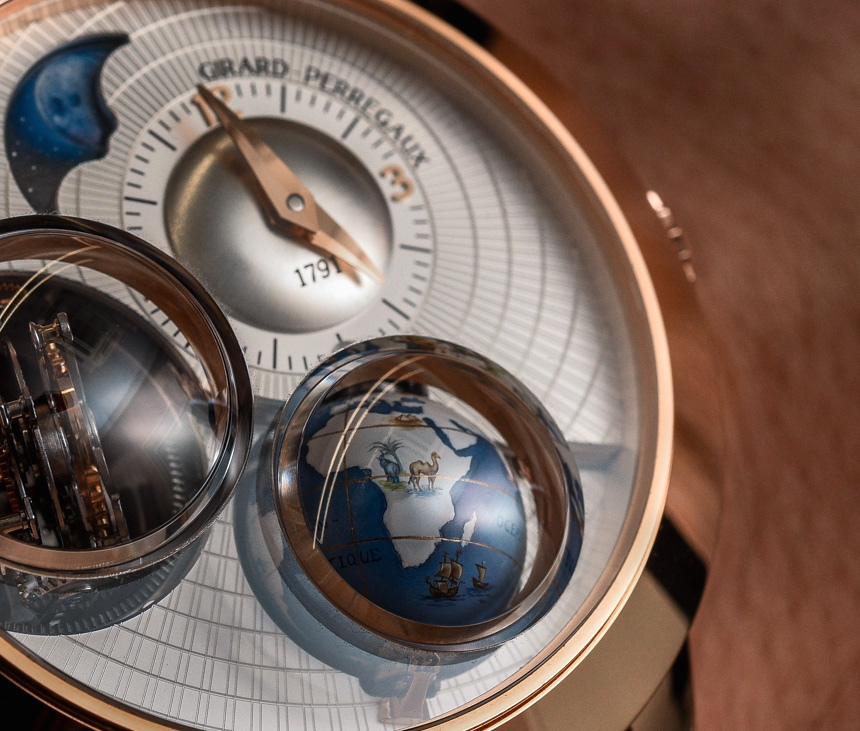 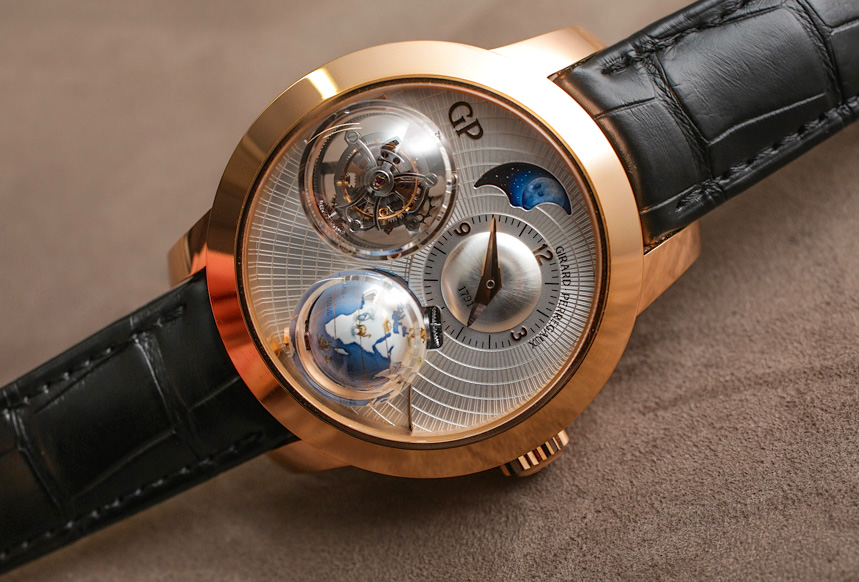 Both the tourbillon and the rotating globe get bubbles on the top of the case – which yes, is weird looking. Not only are there two protrusions from the crystal, but they aren’t symmetrical or even the same size when viewed from the side. It is a compelling view to say the least, but not everyone that notices your complicated mechanical luxury watch will know to admire the bumps. Functionally, the Tri-Axial Planetarium (let me remind you that any planetarium in this watch – assuming there was one – does not in fact have three axis points) offers the time, 24 hour indicator via the globe, and the phase of the moon. 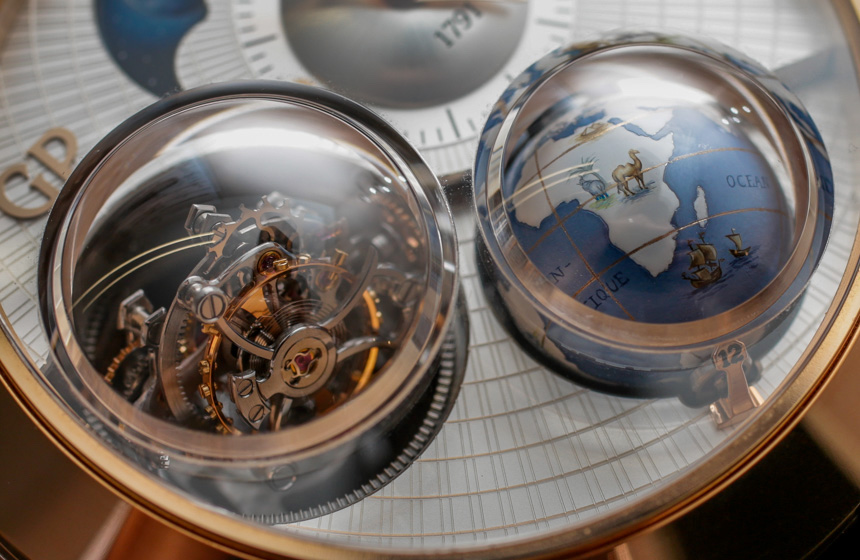 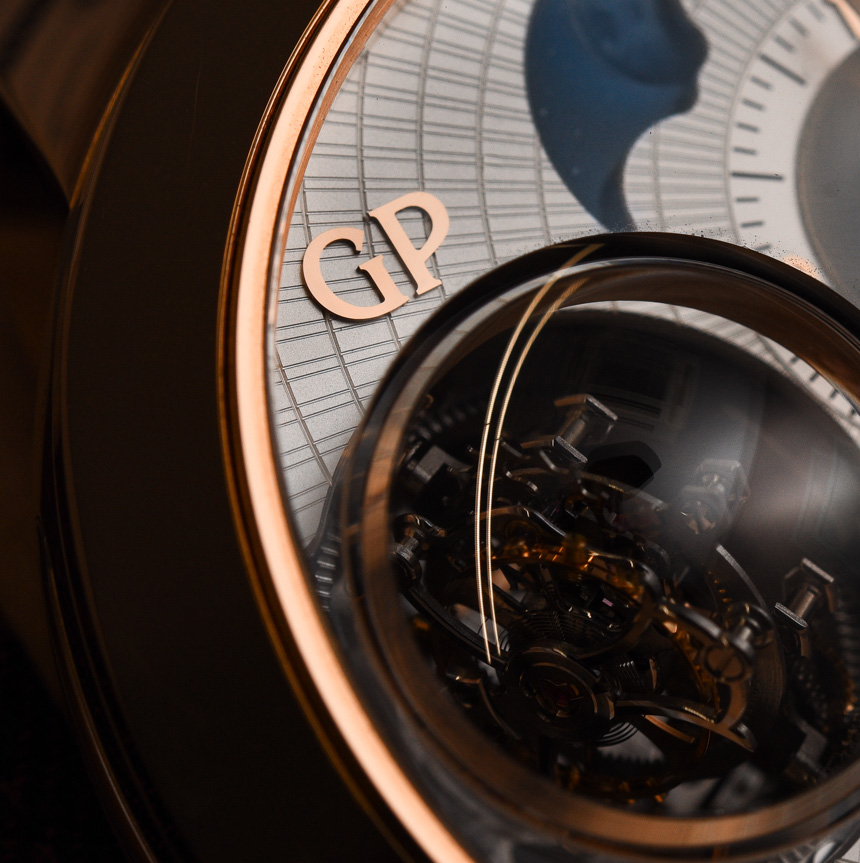 The tourbillon is the fascinating and beating mechanical heart of the watch that will capture the visual attention of anyone who looks at the dial for long enough. It’s really interesting to watch these multi-axis tourbillons in operation because the simultaneously moving parts create a beguiling mechanical dance on a miniature scale. The artistic appeal is the cause for watches such as this to be produced in the first place, so appreciating them must also be done on an artistic level. Still, you don’t have to wear it on your wrist to appreciate what Girard-Perregaux has done here. 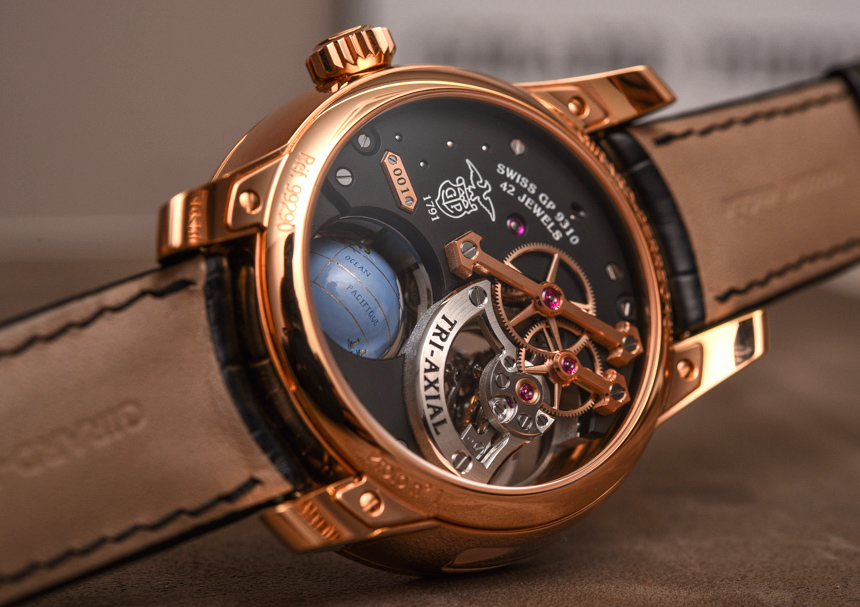 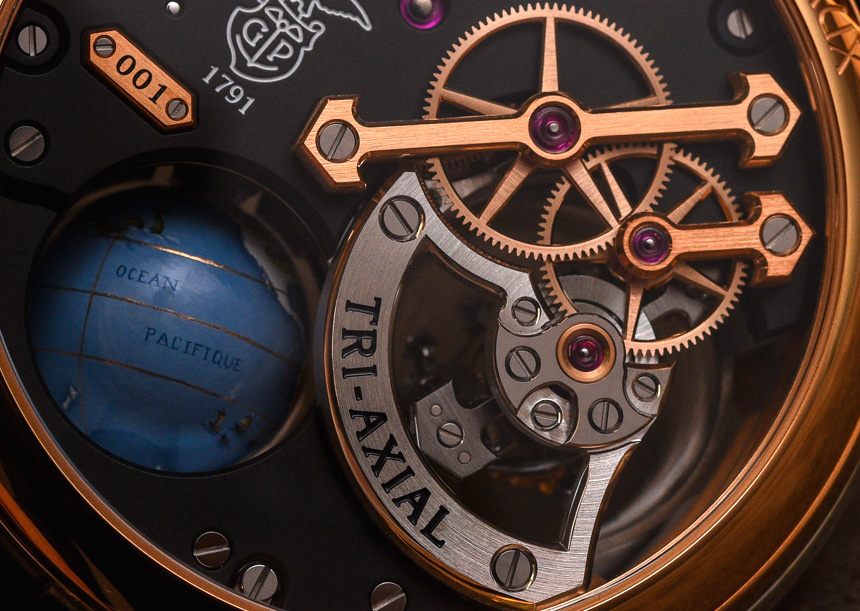 The movement inside of the Tri-Axial Planetarium is the caliber GP09310-0001. Manually wound, it has 60 hours of power reserve, operates at 3Hz, and has been assembled from 386 parts. I don’t think that this movement is entirely in-house, but it may be like other complicated tourbillon watches designed by Girard-Perregaux that are made for them by Greubel Forsey (nothing to complain about there). On the back of the watch, you can see the movement with the signature Girard-Perregaux-style bridges. 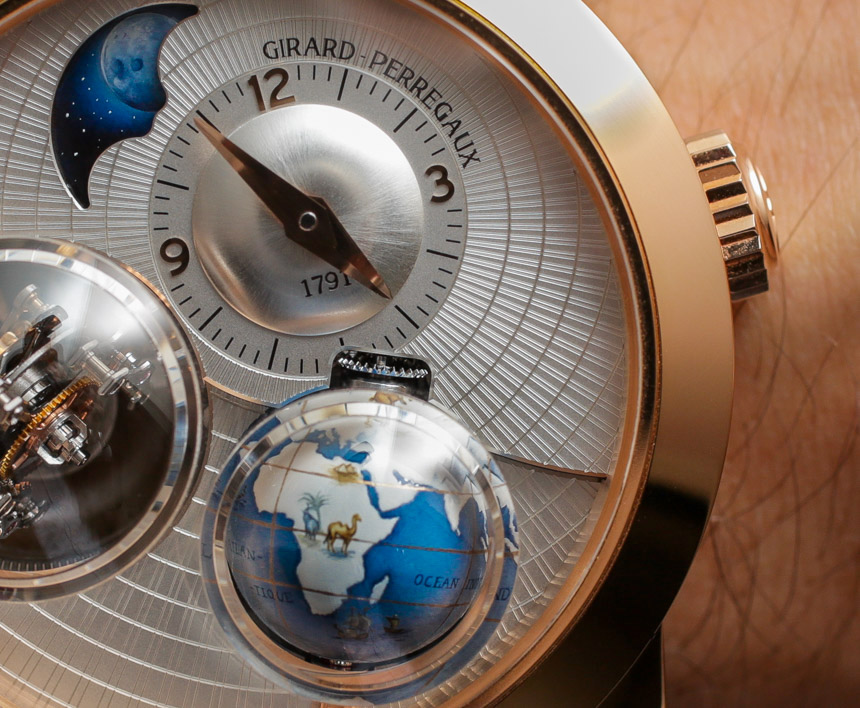 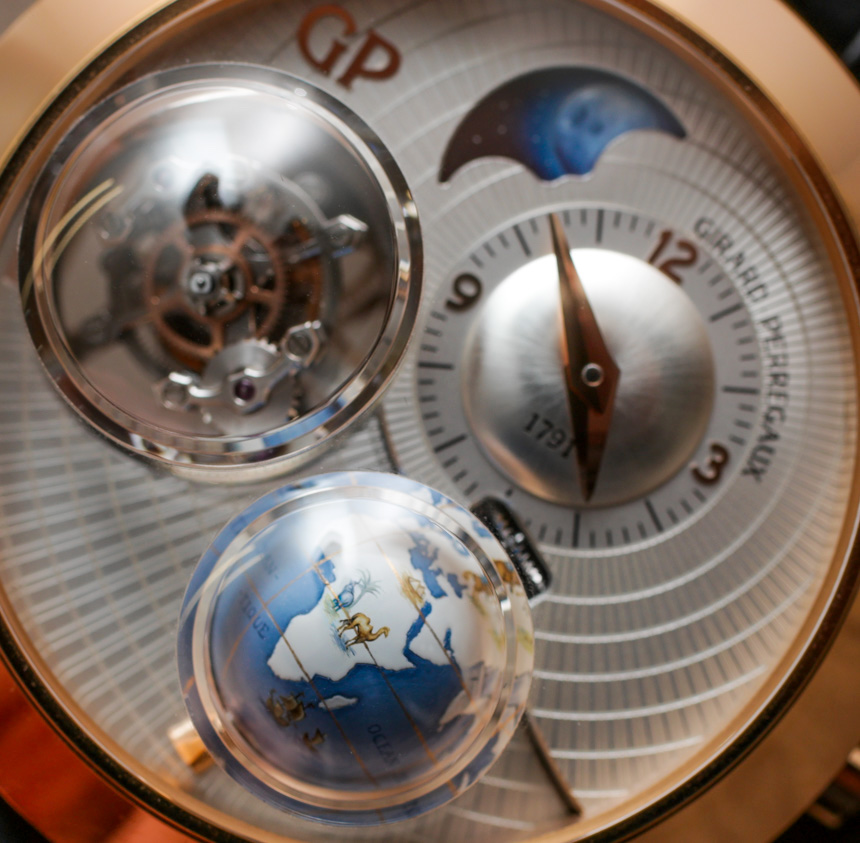 While the dial is of an excellent quality, Girard-Perregaux seems to mix two aesthetics on the watch dial that perhaps confuse the overall theme. The painted Earth globe and moonphase indicator are seemingly of a more traditional, decorative style, while the dial for the time and the radially-engraved silver-toned face seem a lot more 1960s-industrial in their style. 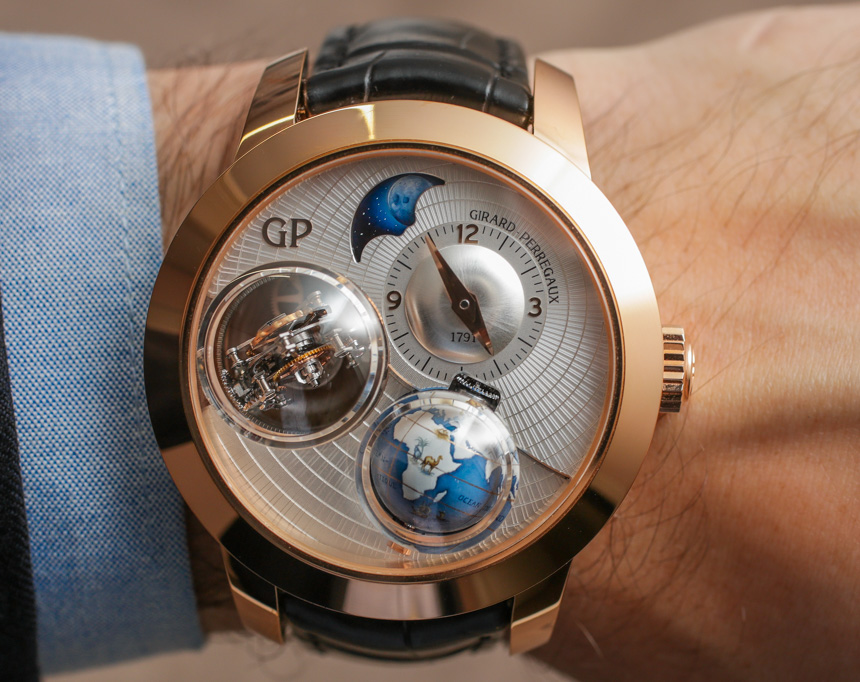 I’m really happy that Girard-Perregaux continues to make watches such as this. They show real dedication to exotic horological mechanisms, which are valued because they endlessly fascinate us. At the same time, the brand also produces models such the Constant Escapement – which are also high-end, and use a very different style of mechanical complication in a more contemporary way. The variety of practical fine watches to these interesting miniature art pieces makes for a well-rounded brand. Now all you need is the wrist-constitution, style courage, and inflated bank account to wear one of these. Price for the Girard-Perregaux reference 99290-52-151-BA6A Tri-Axial Planetarium watch is around $321,000 USD. girard-perregaux.com