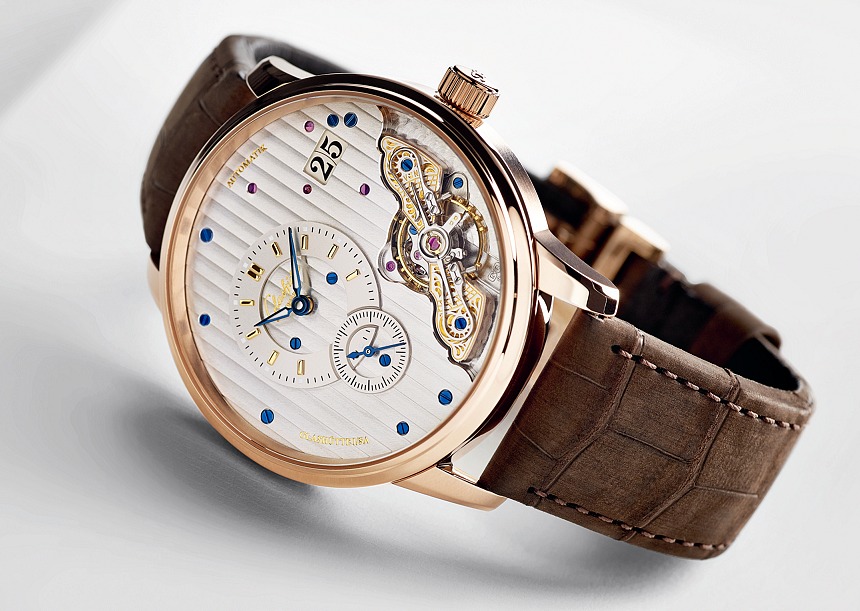 For 2014 Glashutte Original will finally release a new version of the famed PanoInverse XL from 2008 called the PanoMaticInverse. The concept today is the same as it was in 2008, and is one that has been followed by other brands such as Arnold & Son with their TB88. The “inverse” part of the PanoMaticInverse name refers to the fact that the dial of the watch is meant to look like what is normally the rear of the watch – with typical Cotes de Geneve finishing as well as the balance wheel.

It makes for an interesting hybrid design as the dial is a mixture of elements you’d normally find on a timepiece dial as well as the look of a movement. To do this Glashutte Original needed to develop an entirely new family of movements which is continued in the new Calibre 91-02. Unlike the manually wound movement in the original PanoInverse, the 91-02 is an automatic – hence being part of the “PanoMatic” collection. 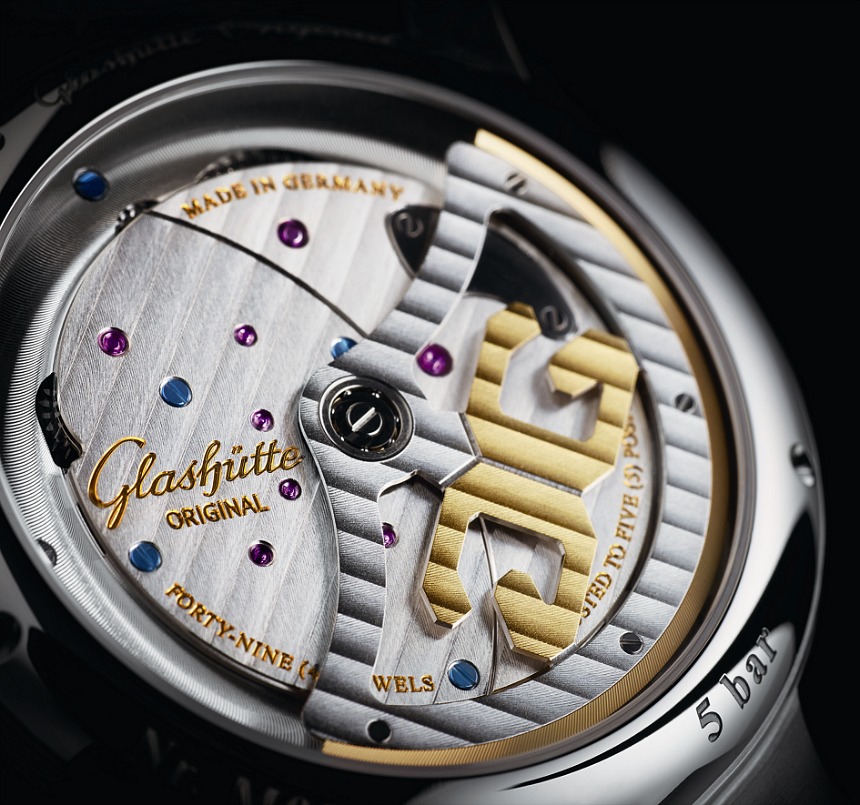 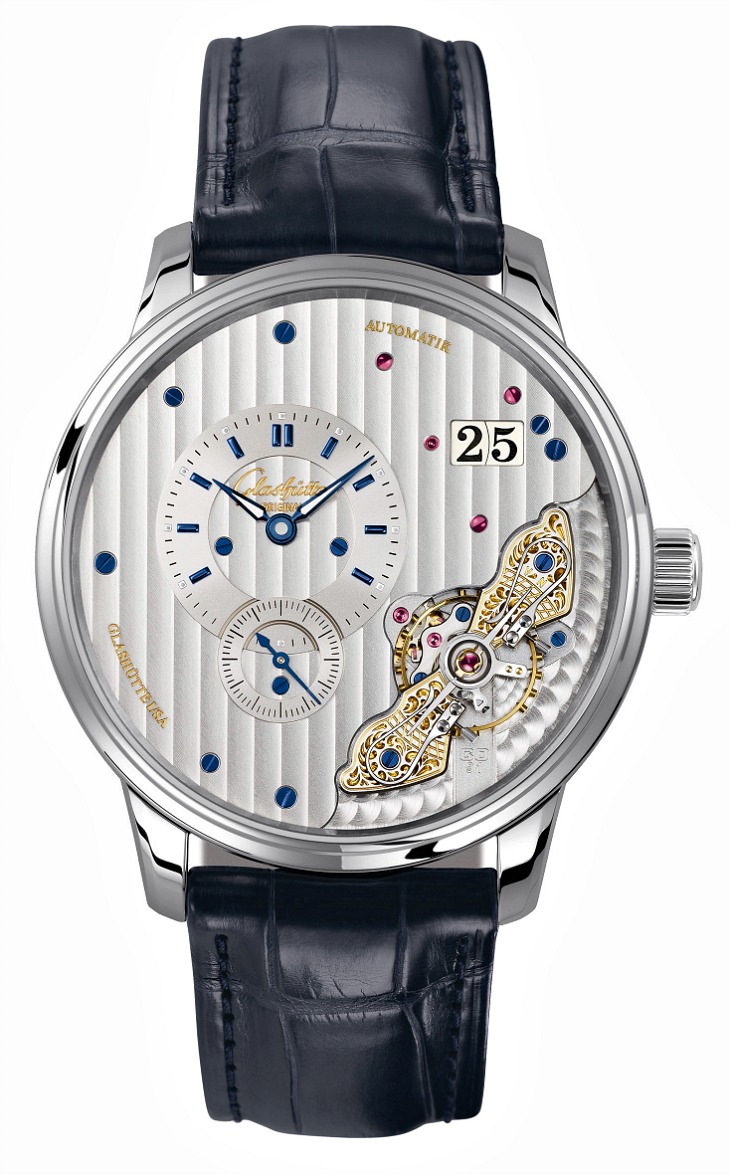 At 42mm wide, this is a “full size” Glashutte Original “Pano” watch that has been scaled down to 40mm wide for some models, though I tend to prefer it in the 42mm wide case. The movement has a power reserve of 42 hours and includes an off-centered display for the time and seconds, as well as a “panorama date” display, which is what Glashutte Original calls their big date windows. The previous PanoInverse watch used this space for a power reserve indicator. The inclusion of a date window is much appreciated, but something makes me feel as though the transition from dial to window is a bit harsh – as though some type of window  or beveled edges might have been nice.

The dial comes complete with blued steel screws and rubies making it very much appear to be part of the movement. I have a feeling that these elements aren’t merely decorative, though it would not surprise me if some of them were. Of course, the entire point of the watch is the dial-mounted balance wheel and escapement assembly. They are produced in full Glasshute Original fashion with a double swan-neck fine adjustment system as well as hand-engraved balance cocks. Very nicely done and a pleasure to look at. 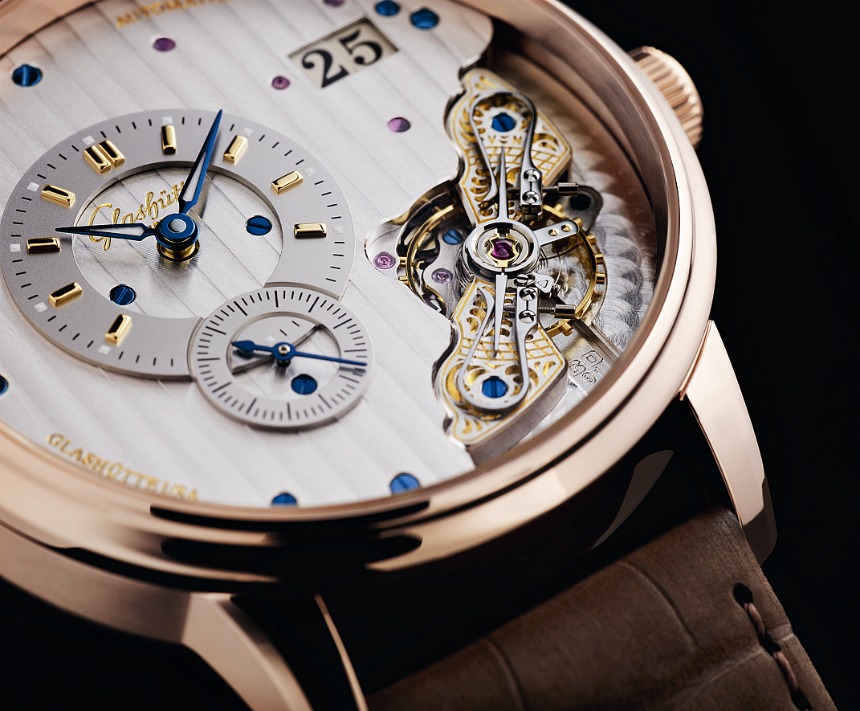 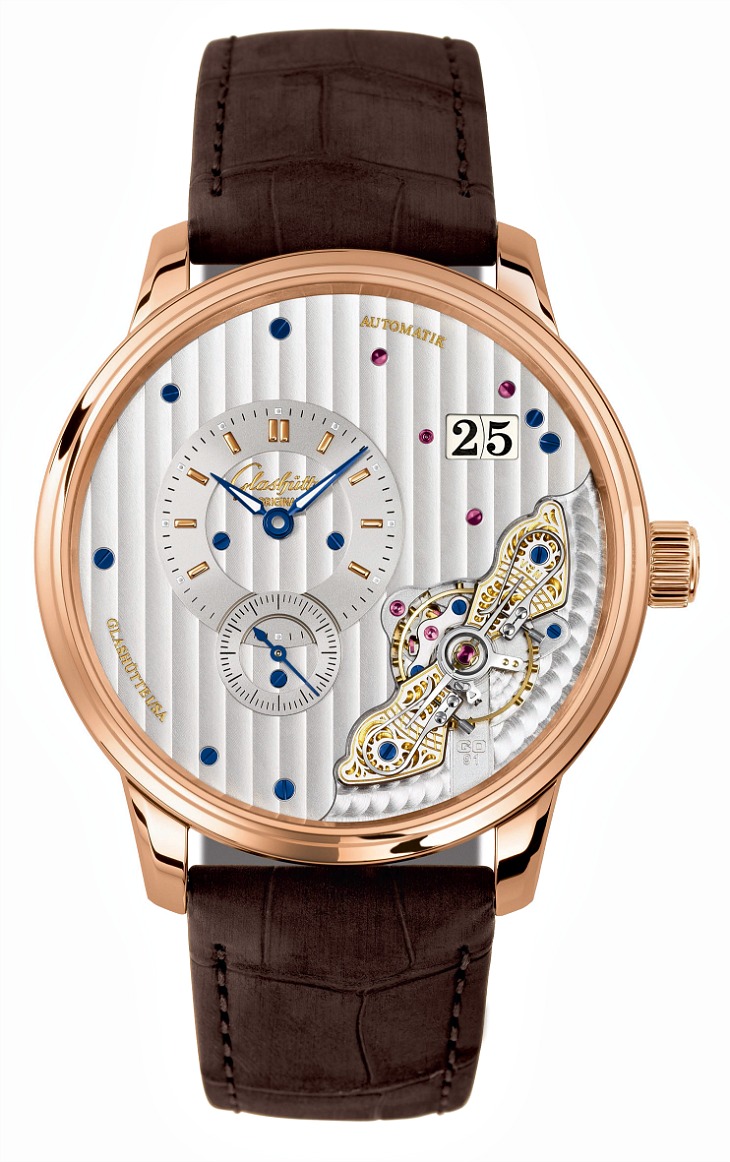 On the rear of the PanoMaticInverse is another sapphire crystal with a view of the automatic rotor, which has that lovely Glashutte Original logo and 21k gold weight. Finishing on the movement is very much the same as the dial, so there is a nice seamless look between the two that many will appreciate.

For 2014 there will be two versions of the Glashutte Original PanoMaticInverse. The most luxurious model will come in an 18k red gold case while Glasshute Original will also offer a version in steel (thankfully). Anticipated prices are between $15,000 – $28,000. glashuette-original.com