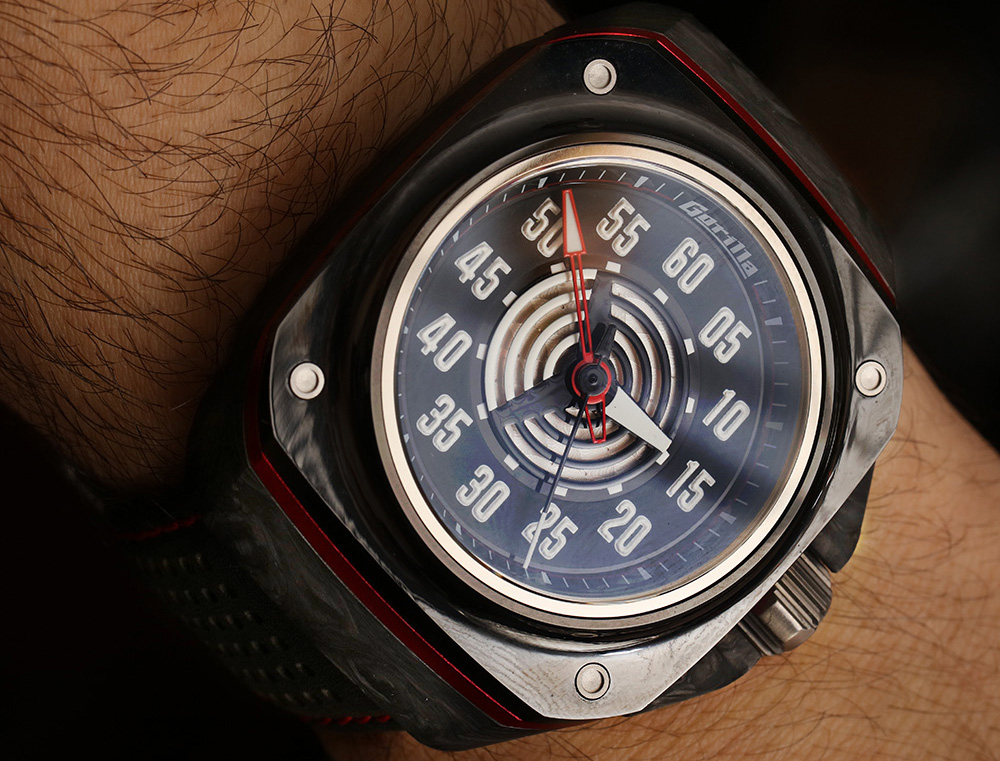 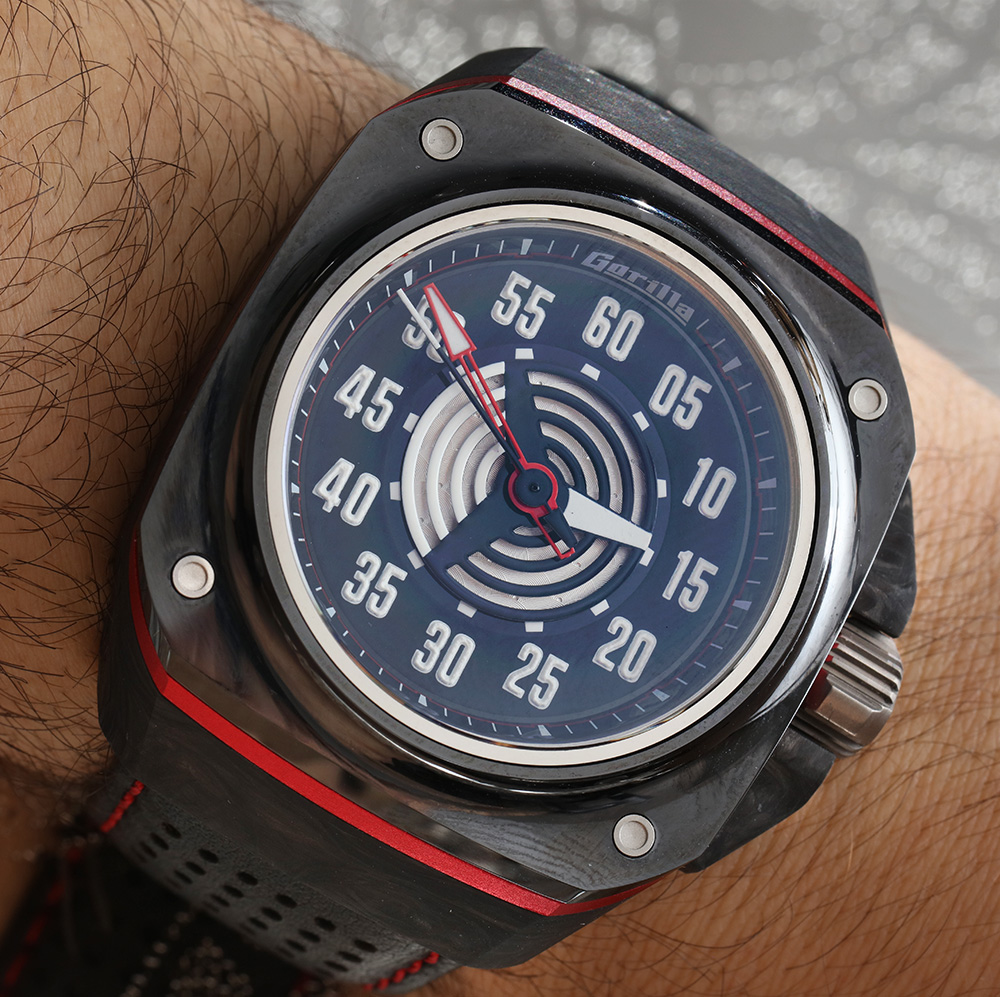 As former Chief Artistic Officer at Audemars Piguet, Octavio Garcia has about as much watch design cred as most could hope for. So it is interesting that he has chosen to strike out on his own, leaving behind the comfortable heritage of the Swiss luxury establishment to follow his dream, start a new brand, and produce a democratically priced watch at under €1,000. In fact, just about everything about the brand, from the name Gorilla to their first design, is a little surprising. The brand debuts with the Gorilla Fastback watch that is an exercise in automotive-inspired design and materials. 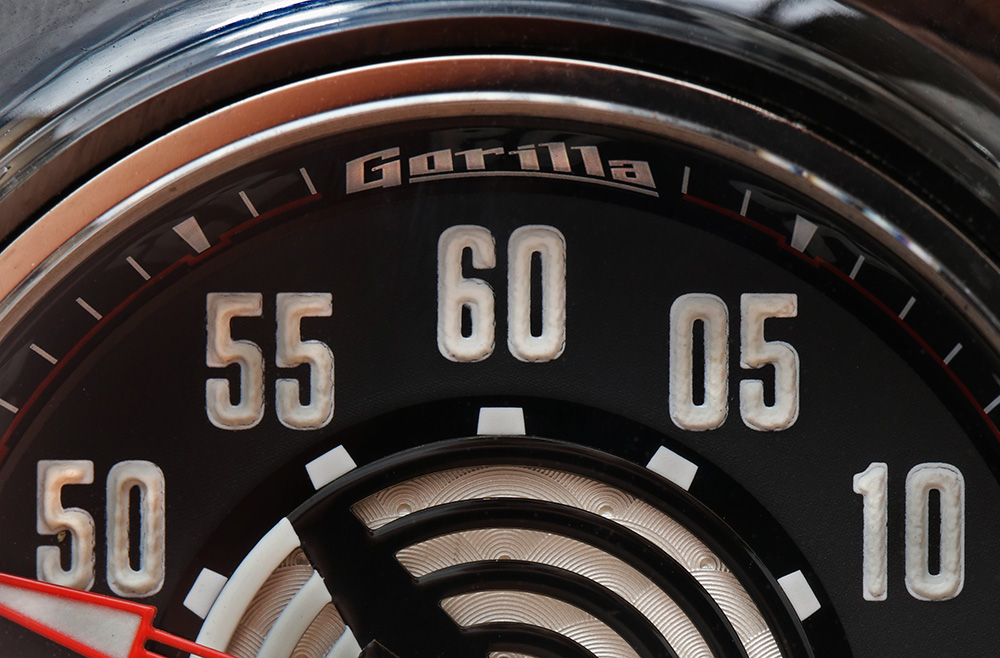 I spoke to Octavio before the official product launch, and it was interesting to hear him describe the watch – especially because I had not yet even seen it at that point. Even so, it seems like one should be able get at least a general sense of a watch based on its inspirations, materials, functions, and dimensions. But with a cocktail of materials, at 44mm wide, and inspired by 1970s muscle cars and 1970s watch design, from a former Audemars Piguet designer, but budget priced… I was having trouble forming a mental image. It could have gone in any number of directions – except something conservative and tame. Not to mention that it’s called Gorilla. Sure enough, I was a bit surprised by the design when I did see it, even though I had been primed for something with a stated mission of boldness and mold-breaking. 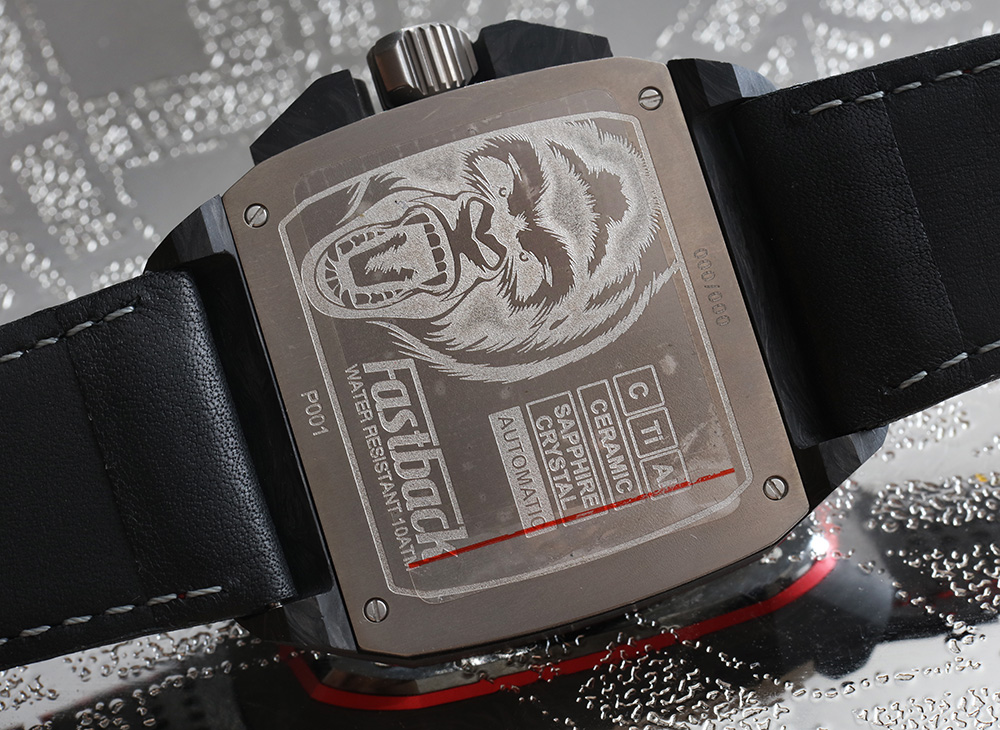 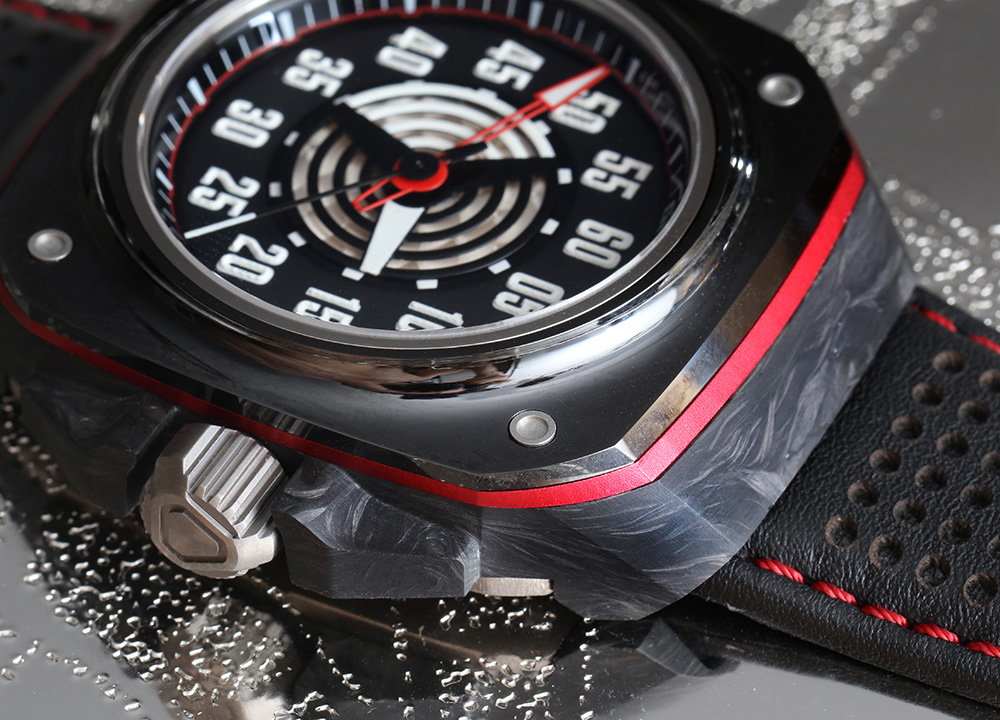 In our conversation, Octavio emphasized that part of his goal was to design a product that “ticks the boxes” that watchnerds are looking for. So, fellow watchnerds, let’s first take a look at the specs for the Gorilla Fastback to establish exactly what we are talking about. The 44mm-wide case is 48.5mm with the crown protector, water-resistant to 100m, and composed from a mix of materials including carbon fiber, ceramic, titanium, aluminum, and sapphire crystal. The watch is powered by the Japanese (Citizen-owned) Miyota 8215, which is an automatic movement that offers hand-winding, though not hacking seconds (meaning the seconds hand does not stop when setting the time). Beating at 3Hz, the Miyota 8215 is known to offer 40-plus hours of power reserve and an accuracy of about -20 to +40 seconds per day. 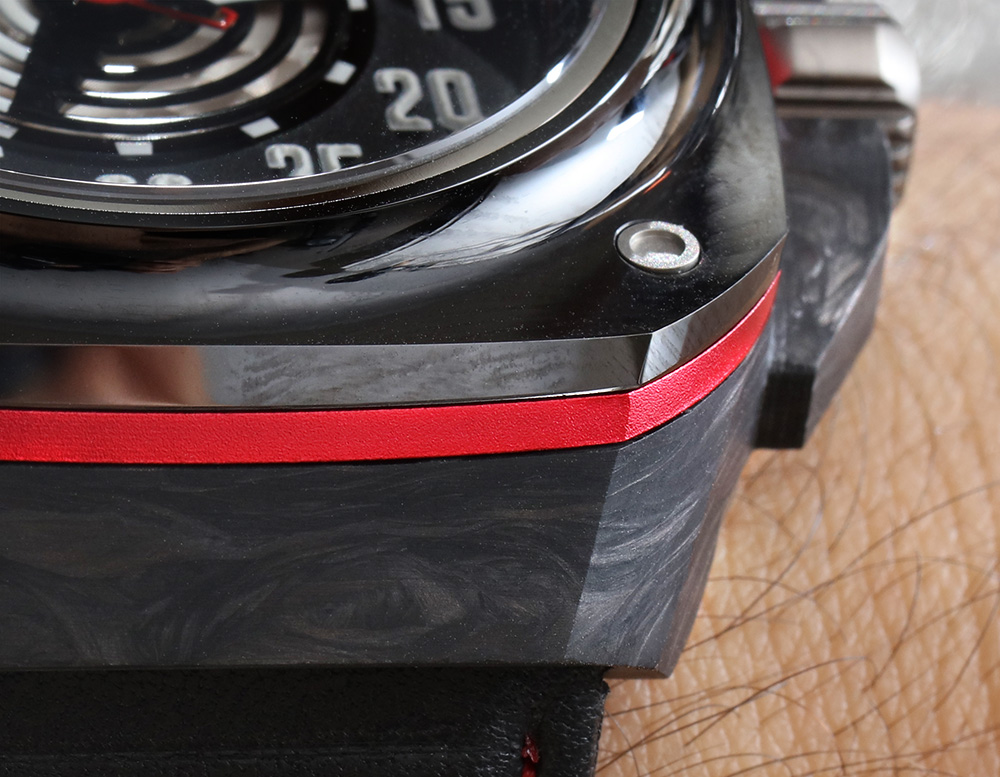 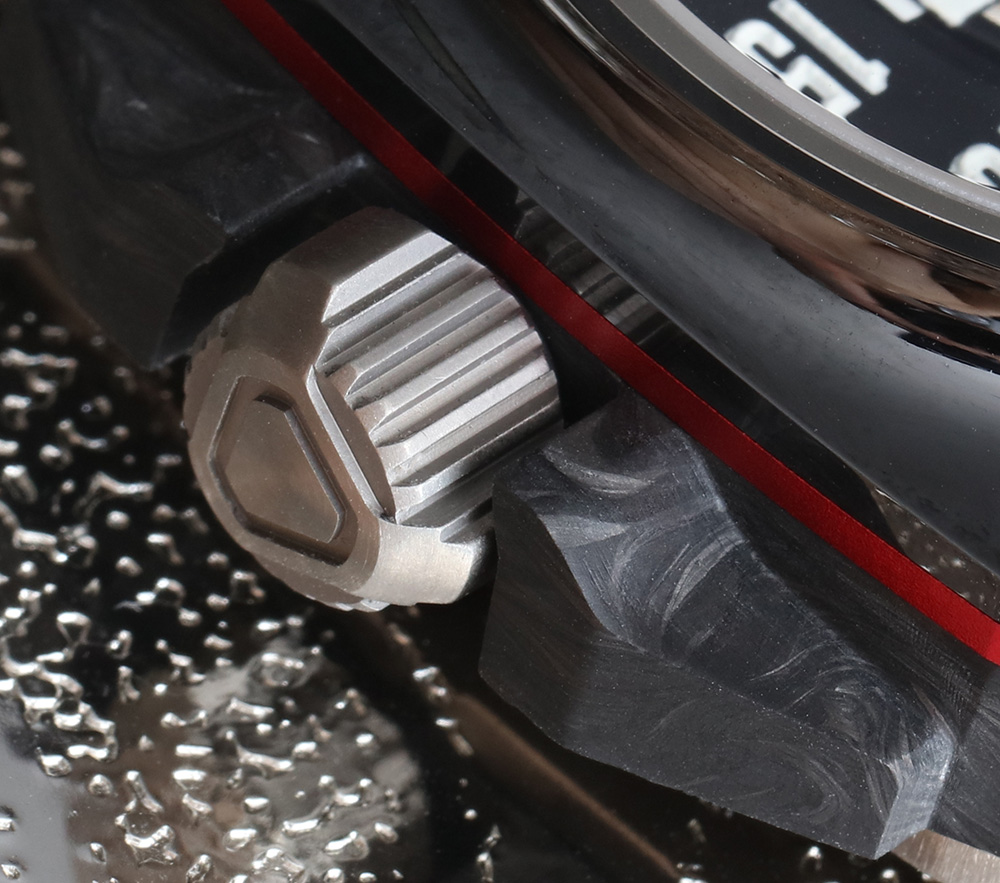 So the real mission of the Gorilla Fastback watch centers around design, materials, and execution thereof. The bulk of the case and most visually prominent material is carbon fiber. Even if the material is not as novel and edgy as it was only a couple of years ago, the grains and textures carbon fiber materials can create are various and potentially interesting. Here, the fibrous patterns are wavy or cloudy, with a muted, inverted marble-like appearance. The racing-red “pinstripe” of an accent above that is anodized aluminum. The screw-down crown is titanium, as is the caseback – where a bunch of specs and materials are listed out, which I like, along with the roaring gorilla face logo. These are materials which can keep weight down, here totaling 110g – which isn’t super light, but is pretty good for the size. 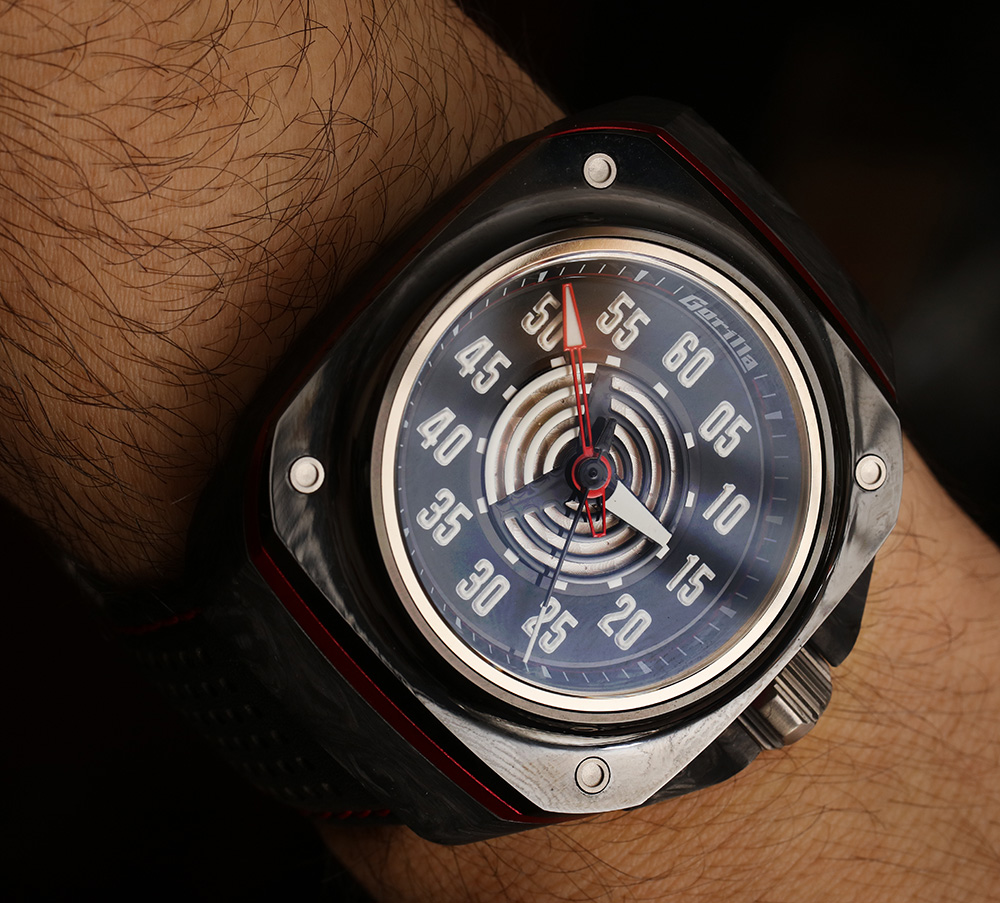 The front of the watch comprises a ceramic bezel and antireflective sapphire crystal, which – and we’ve said this before – means that the whole front is basically scratch-proof. The uncommon shapes and angles of the different material components and aligning the various surfaces would seem like a production challenge, but the magic of CAD (computer-aided design) and CNC (Computer Numerical Control) machines mean that the designs created in Switzerland (by designers of American and Austrian nationalities, if any of that matters) were able to be carried out in Asia with remarkable precision. The creators note that the production process has been very fluid, as they most certainly have established connections and relationships with some of the best suppliers for their needs. Some of the the angles look rather sharp to me and could have maybe benefited from beveling, but the designers perhaps wanted to create a somewhat blocky and raw impression.