Gorillaz × Casio Team Up For One Last Intergalactic Release 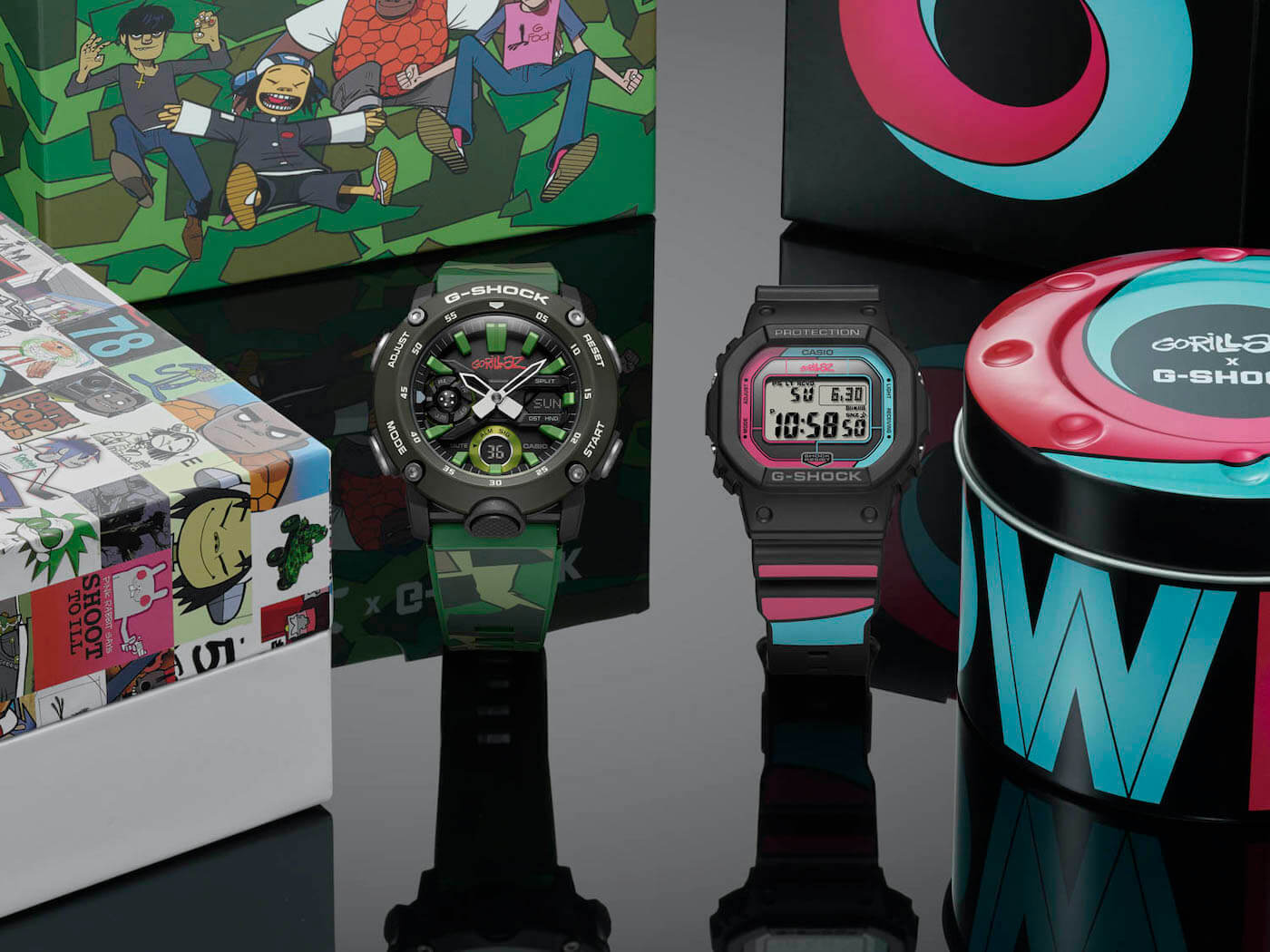 British virtual music group Gorillaz is back with a new Casio collaboration, following on the heels of last year’s success. In October 2018, Gorillaz and Casio co-created their first series of watches together, and now they are back for round two. This year’s releases are decorated in colorways that reference album covers rather than band members. The GA2000GZ-3A is garbed in camouflage as a nod to Gorillaz debut album (Gorillaz, 2001), while the GW-B5600GZ-1ER has a nifty bubblegum skin in black, neon pink, and neon blue, inspired by the band’s current album entitled The Now Now (2018). Both watches were designed by Gorillaz co-creator Jamie Hewlett.

So, aside from some pretty neat color schemes to choose from, the best thing about these new limited-edition watches is the inclusion of Bluetooth connectivity on the GW-B5600GZ-1ER. While this kind of technology is not for everyone, it is a logical step from digital, go-anywhere watches that hope to remain relevant to a younger generation growing up with high-tech smart devices all around. Personally, the GW-B5600GZ-1ER with the pink and blue flashes is my favorite Gorillaz × Casio collaboration piece so far, and while I own a GW-B5600-2ER with Bluetooth functionality and a DW5600HR-1GD from the original Gorillaz run, I might well add this one to the ever-expanding digital stable within my collection. 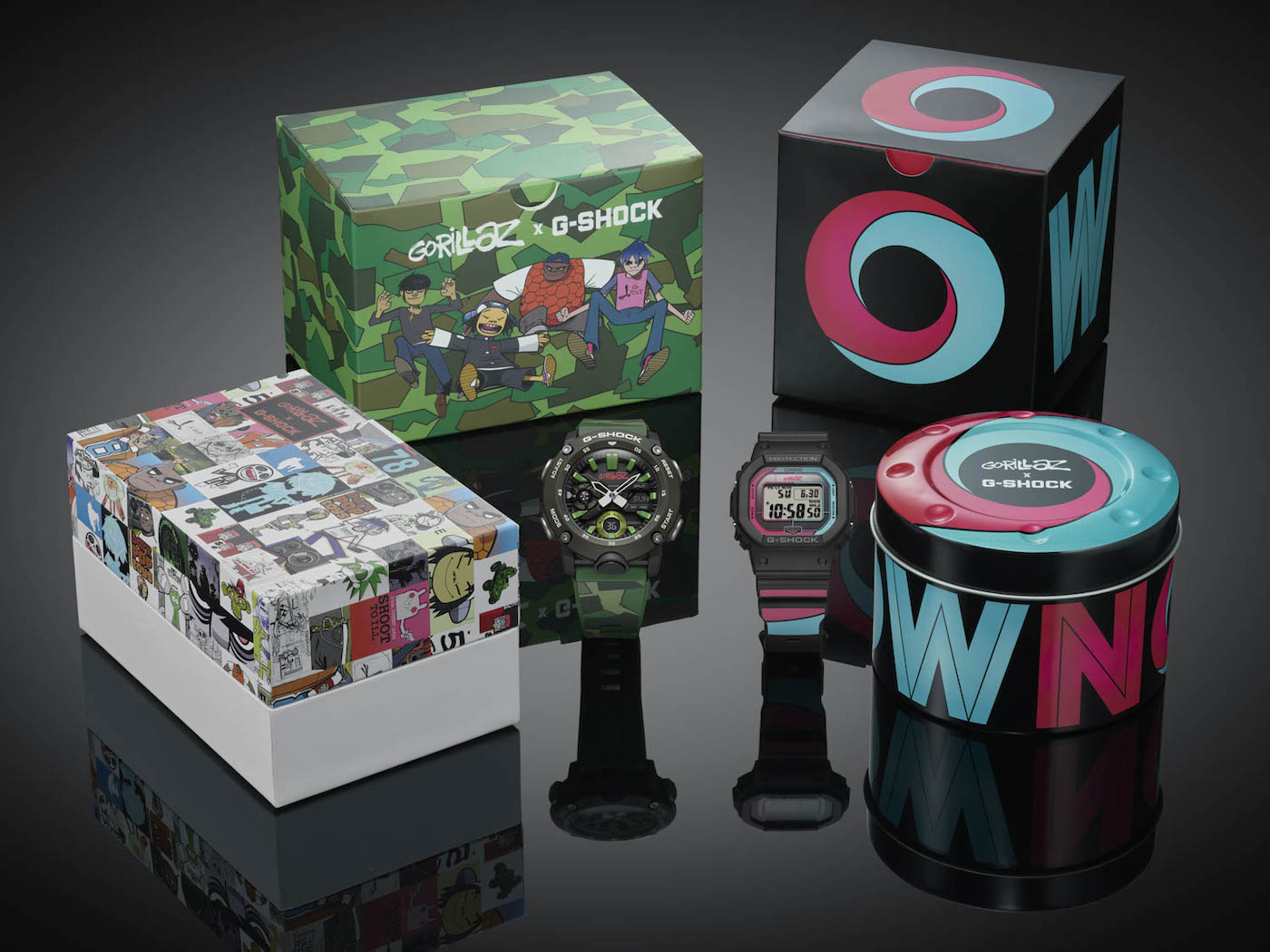 The GW-B5600GZ-1ER is the fifth Gorillaz digital with a positive display (black numerals on a light background). The other three in the collection have featured negative displays. It is nice to see the designers utilizing these different looks. While the new GW-B5600GZ-1ER features the electroluminescent backlight one would expect from this series, the screen is invaded by a floating “NOW” graphic when the light is activated. I understand the desire to riddle these watches with branding, but, for me, this is a desire that should be consciously kept in check. One of the things I like most about these Gorillaz watches, in general, is their subtly. I don’t even need the band name printed on the watch (hence my choosing the DW-5600HR-1GD from the first range). The “NOW” graphic looks “cool” but it just gets in the way of the information I’d prefer to see more clearly displayed.

Meanwhile, the GA2000GZ-3A presents an entirely new reference and look for the collaboration. The Gorillaz’ signature camo print looks at home on one of the two straps with which this model is supplied. An additional strap comes in a darker, military green color, meaning this watch can be smartened up a little bit if required.

The word from Casio is that these limited-edition releases will conclude the “journey of G-SHOCK creator Mr. Ibe and Gorillaz aand members,” dropping the curtain on their year-long creative odyssey through space (apparently) together. To make things nice and simple, both of these new models will retail for $170 and will be available from gshock.com and the G-Shock Soho Store from September 18th, 2019. One week later, the remaining models will be allocated to select G-Shock retailers including Macy’s. In both cases, the custom packaging is a real treat. To learn more about the brand, head over to casiousa.com.