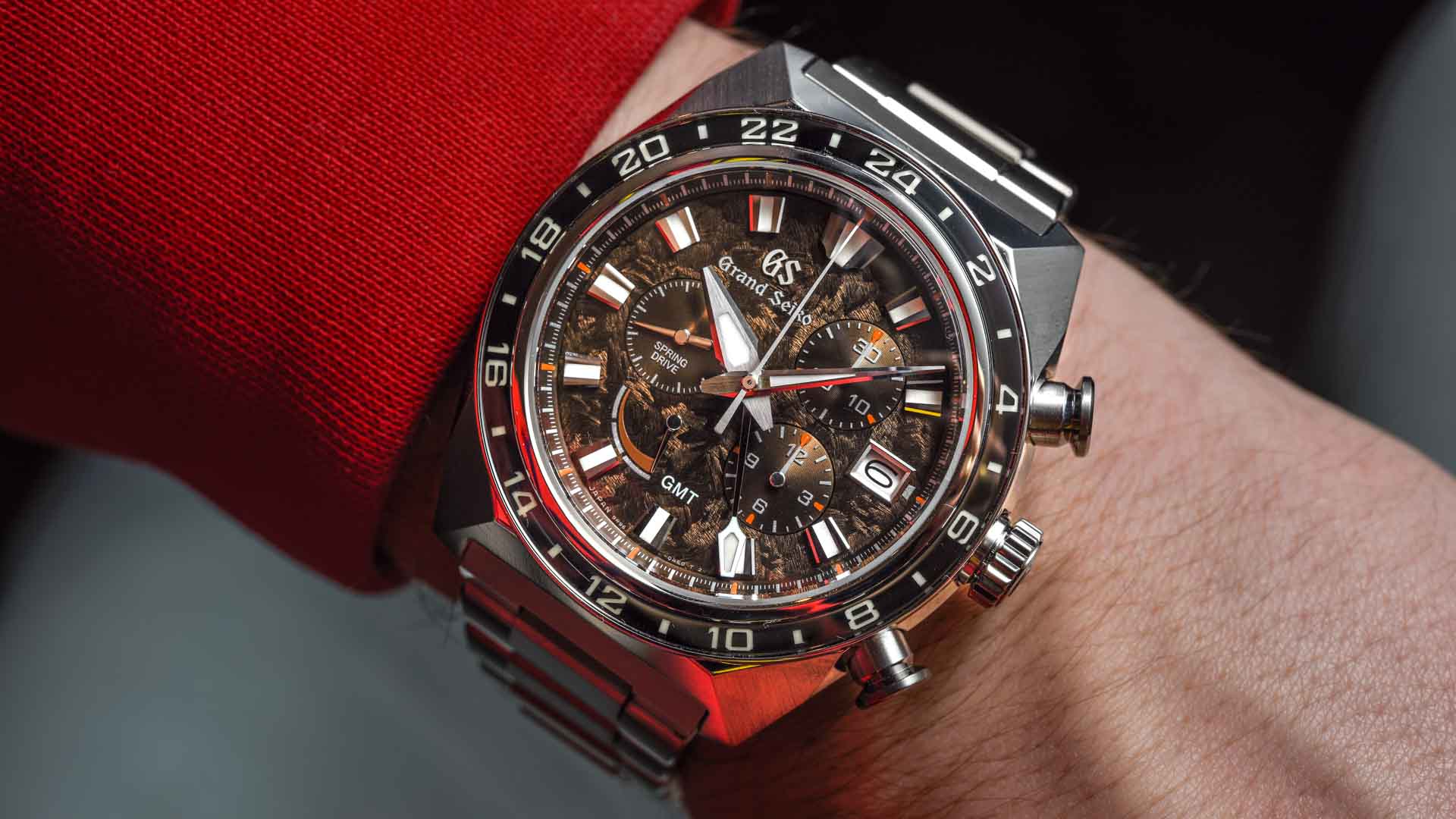 From a customer’s perspective, there are currently two distinctly different ways of looking at Grand Seiko. For one, Grand Seiko, as the consensus seems to suggest, has become truly very expensive, and I seem to agree with that sentiment. By its own standards, it has indeed become a lot more expensive. The other way of looking at it is comparing today’s Grand Seiko to its competition — and then GS is almost as mighty as it’s ever been. A case in point is the Grand Seiko Sport Spring Drive Chronograph GMT SBGC231, launched at BaselWorld 2019. Where the new SBGC230 & SBGC231 stand out are in their design and presentation, as well as, you guessed it, their price. The SBGC201, in steel on a Zaratsu-polished steel bracelet and with a champagne-colored, elaborate dial with heat-blued hands and all the rest of it, retailed for $7,700 with essentially the same movement — save for a negligible, 0.5-second daily accuracy difference. By contrast, the titanium SBGC231 (limited to 500 pieces) has a retail price of $12,900, and the 18k rose gold SBGC230 (limited to 100 pieces) retails for an eye-watering $42,000. That’s an increase of almost 70% between the two non-precious metal watches… Come to think of it, I’m not sure if I could name any other luxury brand that has produced such a steep increase in such a short time through repackaging an established caliber. Titanium is tough action to work with, but the titanium version of the SBGC001, called SBGC013, cost a premium of “only” 35%, and it brought an all-titanium construction and ceramic bezel into the equation. So, yeah, we went from 35% to 70% in no time at all. There is, as I mentioned, another way of looking at it, though. At $12,900, the SBGC231 costs almost exactly the same as the Rolex Oyster Perpetual Cosmograph Daytona in steel. Sure, there is a difference in status and perception between Grand Seiko and Rolex, but the under-the-radar nature of GS is a big plus for some (as opposed to an objectively negative thing), so we shall leave that out of the equation and nerd out over the technical prowess of these two watches. The Grand Seiko Sport Spring Drive Chronograph GMT SBGC231 is crafted from titanium, a lightweight material generally accepted within industry circles to be considerably more difficult to finish — and to bring it to Zaratsu levels of detailing should be a challenge in itself. Not only is the case material of the Grand Seiko arguably more complex than Rolex’s (at this point) industrialized 904L steel, but so is its case shape. There is a solid reason why we don’t see massive flat surfaces and hard angles on watches — even ultra-high-end watches prefer to avoid such shapes as much as possible. Having tried case polishing on a few different occasions with different materials, I have experienced how frighteningly easy it is to destroy any one of these edges and angles — and what you’ve taken off, you’ll never be able to put back on. As much as it pains me to say (it doesn’t, really), Rolex cases are very simple and foolproof once you start looking at them this way. They are a remarkably efficient design, in that they can be produced in high volume and look great even to the untrained eye. Movement-wise it’s a remarkably similar story. Rolex achieved borderline technological perfection with the 4130: a column-wheel, vertical clutch chronograph capable of -2/+2 seconds daily rate and a 70-hour power reserve, all in a very compact form. A lesser-known fact that lies behind all that superlativeness is that the 4130 is composed of just 201 components, definitely among the lowest number for any such automatic chronograph, seriously aiding the reduction of assembly time and the expertise required to assemble. By stark contrast — although Grand Seiko does not do much to communicate the merits of its Spring Drive Chronograph — I managed to find out that its 9R86/9R96 calibers comprise 416 components, more than double that of the Rolex 4130. This entails the addition of a power-reserve indicator, 24-hour GMT display, quickset hours and date over the rather spartan Daytona that relies on a pointless tachymeter scale to increase the perception of complexity. Just as important as all that muscle-flexing is the presence of Spring Drive, in my opinion, the greatest and most advanced thing to have ever happened in “affordable” mechanical watchmaking. The 9R96 inside this SBGC231 is the “nicer” version of 9R chronograph calibers with an 18K gold medal on its automatic winding rotor and a more carefully selected quartz oscillator that allows it to be accurate to -0.5/+0.5 second per day (±10 seconds per month) — other than these two, there are no other differences to report, and power reserve remains three full days. Add all those together, along with the much more complex case and movement, and what you get is a watch that is not only more in every way, but is also technically superior in at least a few… than a Rolex. Would I be ready to drop $12,900 on this sculpted titanium SBGC231? Not yet, because I am another one of those fallen souls who is yet to get over the loss of sub-$10k Spring Drive Chronographs. Would I buy it over a yuppie-friendly steel Daytona? Hell yeah, any day of the week, and I’d rejoice in its technical superiority from inside-out. The Grand Seiko Sport Spring Drive Chronograph GMT SBGC231 comes in a 44.5mm diameter and 16.8mm-thick case that verges between retro and futuristic with all its brutalist angularity. Its unusually brushed dial was designed to replicate the look of a lion’s mane, with the lion being the symbol of Grand Seiko. The brand prefers not to share anything about the technique used for the dial, but we do know it is a regular brass base that is used. Again, price for the Grand Seiko Sport Spring Drive Chronograph GMT SBGC231 is $12,900 and this limited edition of 500 will be available starting in May 2019 at select Grand Seiko stores and authorized partners. Find out more at grand-seiko.com.