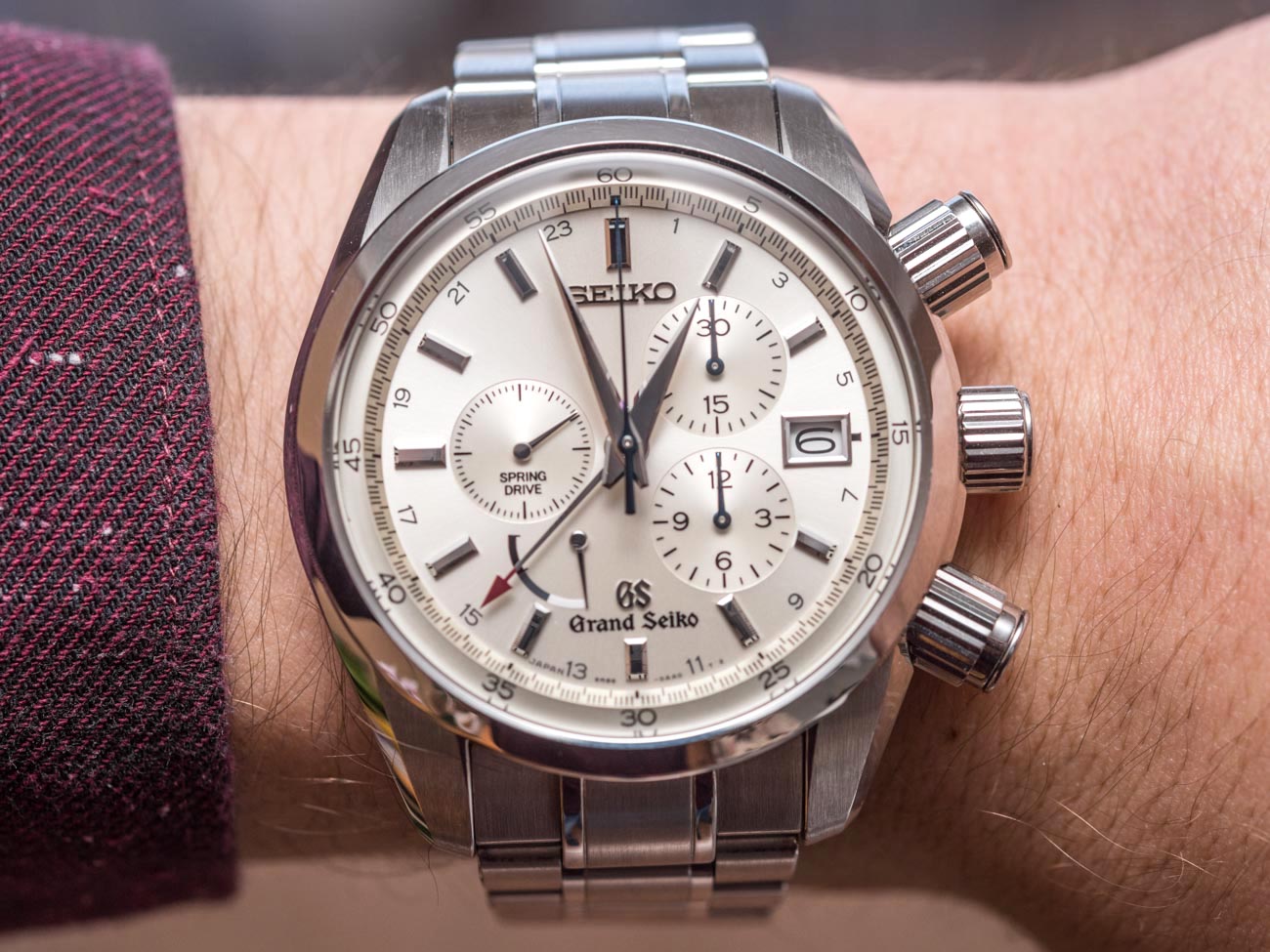 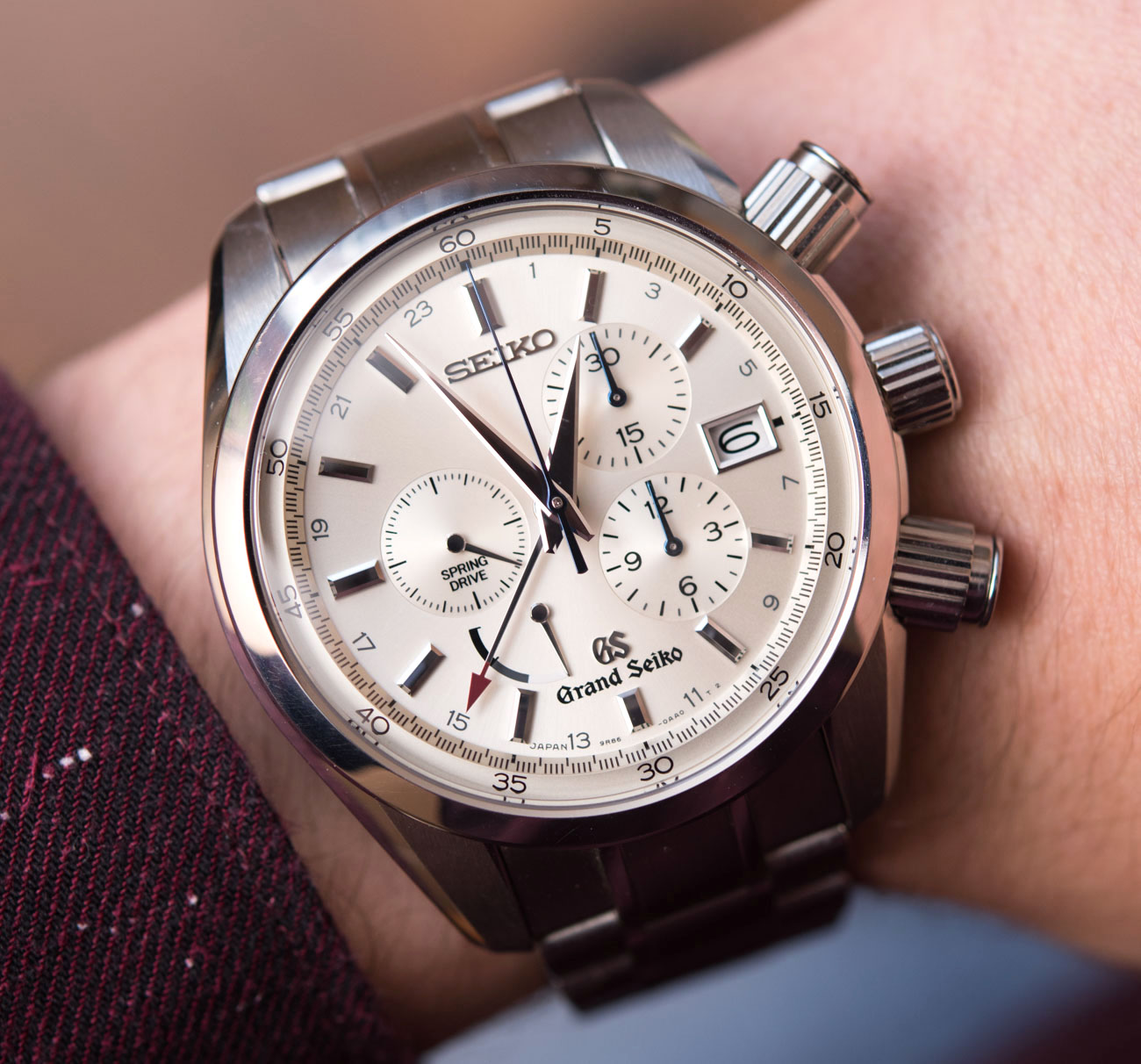 About Those Pushers – i.e., Wearability

Every time we have ever posted about this watch (or in fact read about it online anywhere), a concern echoed by so many was about the size of the crown and pushers, which is why I decided this odd design element deserves its own dedicated chapter.

If you don’t like the looks of it, there’s nothing that could possibly change that; though I’d still highly recommend trying the watch on, because their visual weight is much, much smaller in the metal than it is in images. 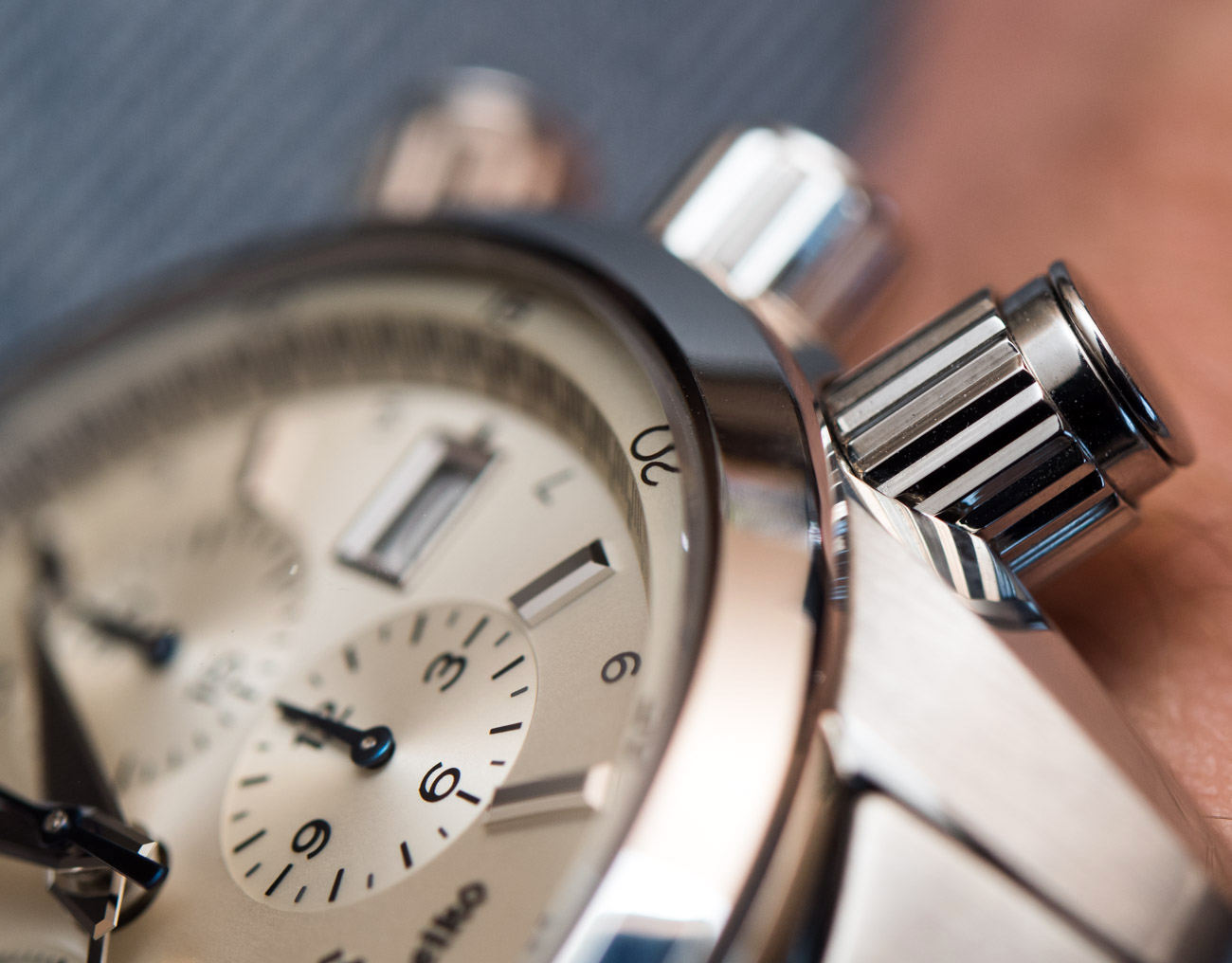 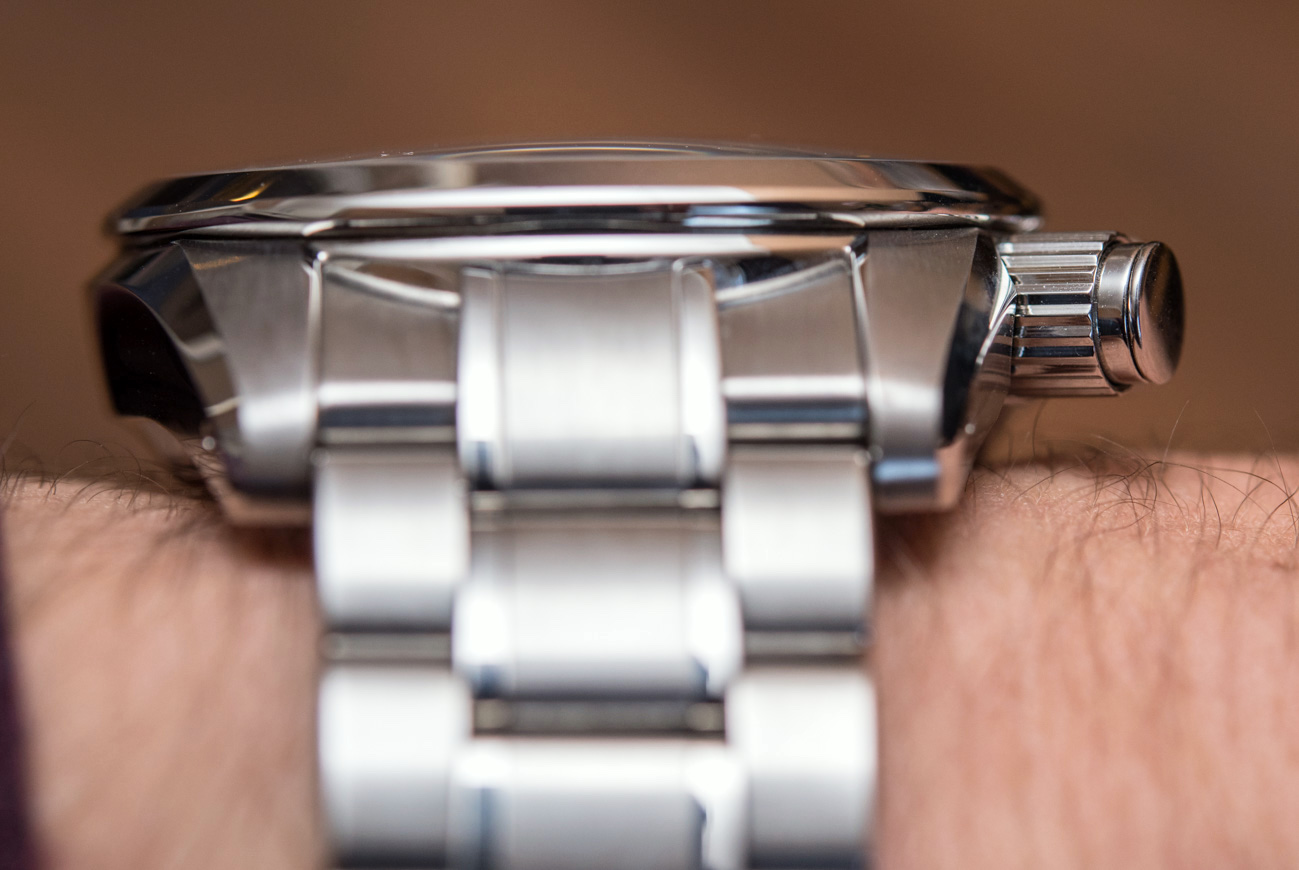 As far as wearing comfort is concerned, the pushers are located very high on the side of the case, meaning that they are over the upper 2/3rd level of the profile. This keeps them up and high above the top of your wrist, giving your hand plenty of room to move. Over the course of the last nearly two months, I have never once had an issue like I had with, say, Panerai watches, when a large crown or other device dug painfully into the top of my hand. Another factor to be considered is that they are at an angle, so that their “outermost point” is in the same outreach as the edge of the crown – as illustrated by the image below. 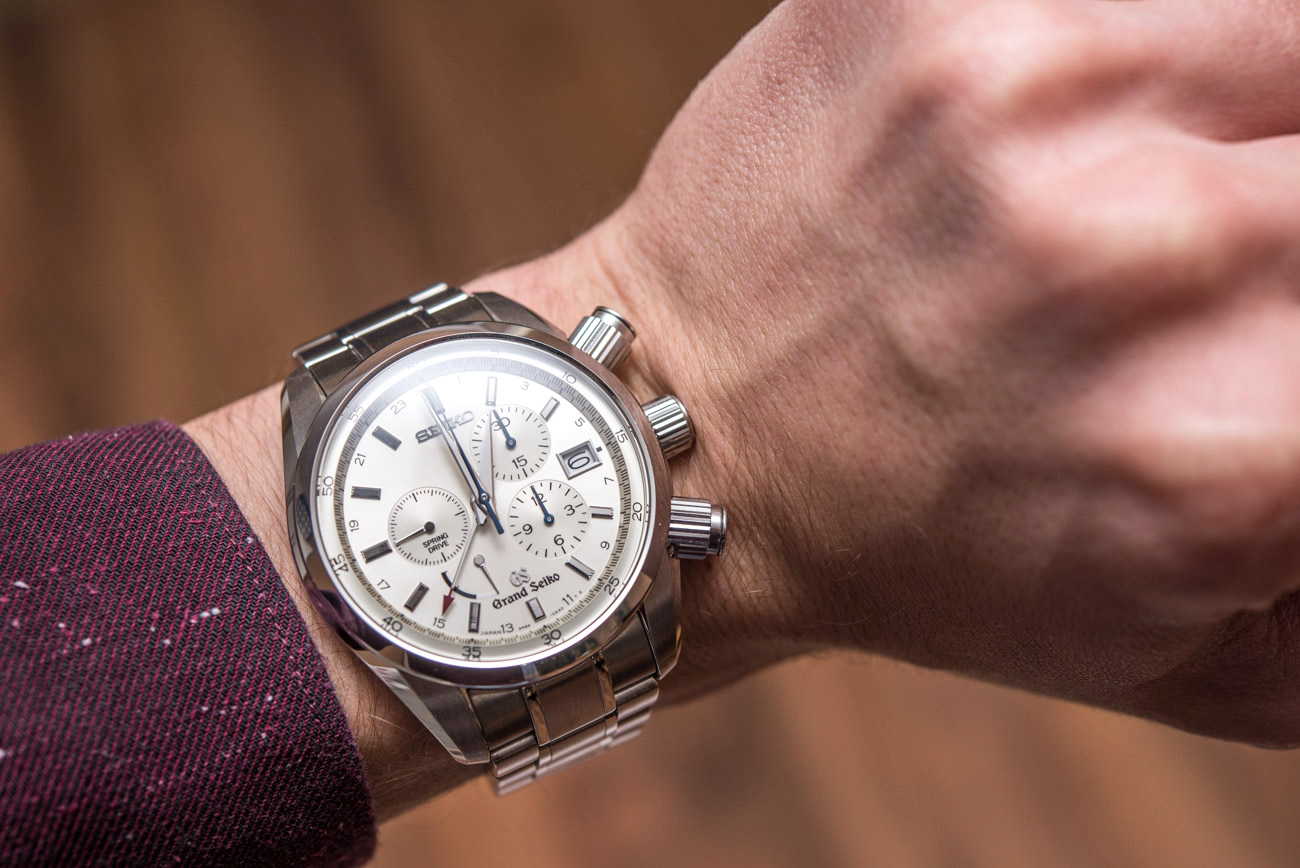 The way they work is simple: you just rotate the pushers away from you to lower a security wall that otherwise locks the pushers in place by not allowing them to be pushed in. Seiko put a black bar at the base of the pushers which shows up only if the pushers are unlocked. 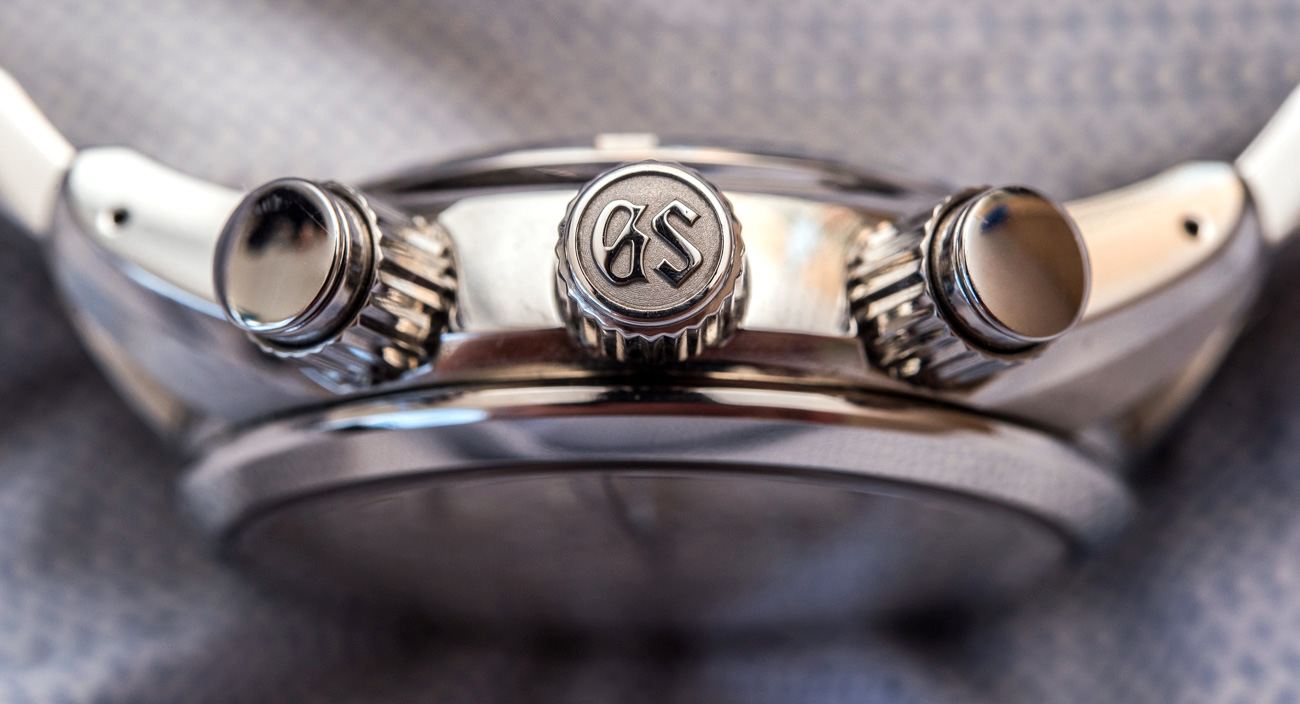 Water resistance, thanks to the screw-down pushers and crown, is 100 meters, allowing you to take this chronograph for a swim, snorkeling, or whatever you like that isn’t deep diving. Speaking of the crown: when screwed down, it locks upside down, like all other Grand Seikos I have handled more recently. Not sure why it has to be upside down, but GS seems to be quite attached to this unusual feature. 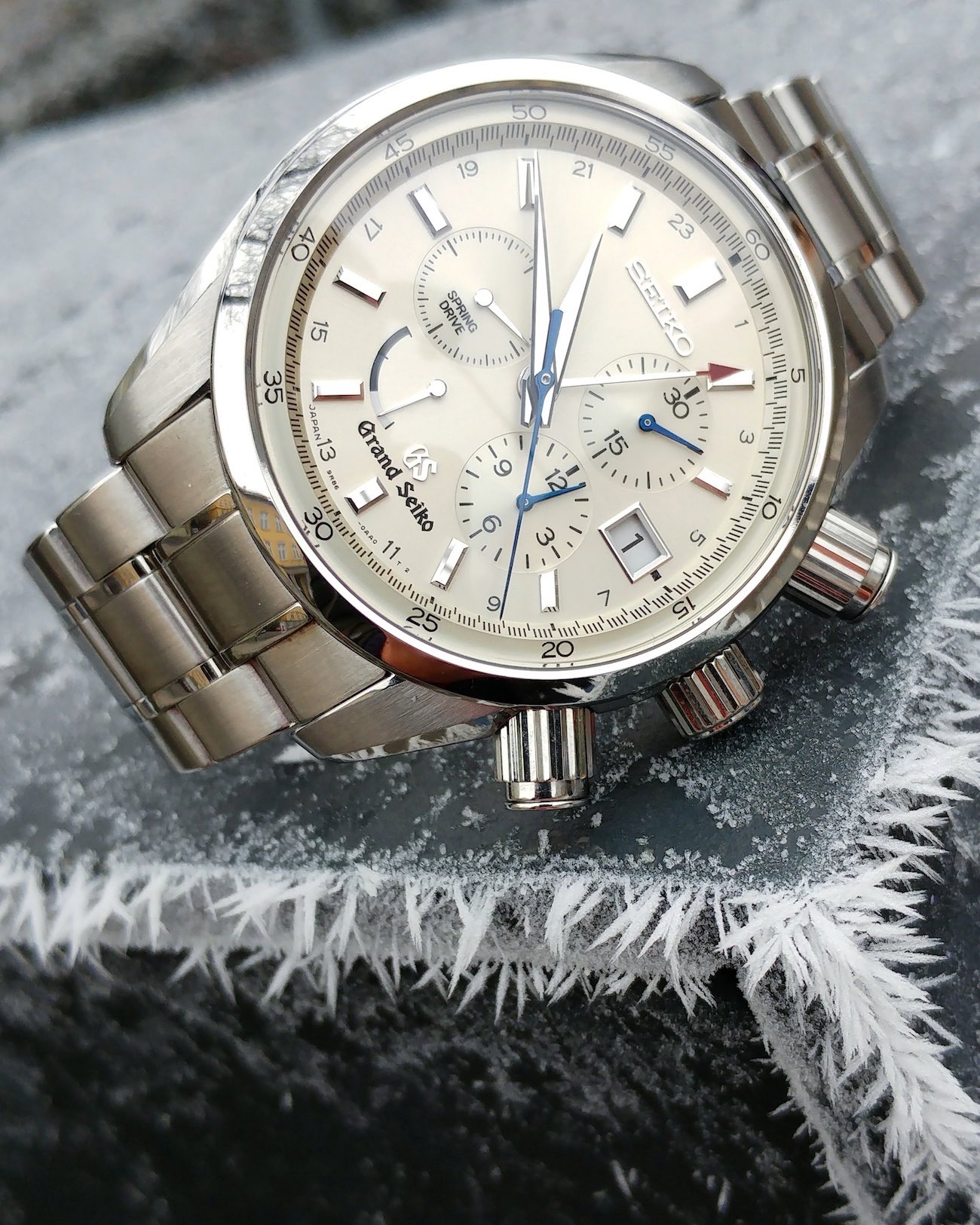 Seiko tests Spring Drive watches to work between -10 and +60 degrees Celsius (that’s 14 to 140 Fahrenheit), which is a much broader spectrum than what mechanical watches can tolerate, which further encourages one to not shy away from wearing a Grand Seiko under any everyday circumstance – the proper water resistance and tolerated temperature range mean there is no need to baby it too much.

The sun-burst finished, champagne colored dial of the Grand Seiko Spring Drive Chronograph SBGC001 can be viewed through what Seiko calls a “high definition, dual-curved sapphire crystal.” We have said this before, but we’ll say again: when Japanese brands define something by its property/feature, you can bet high on said property/feature performing as advertised. 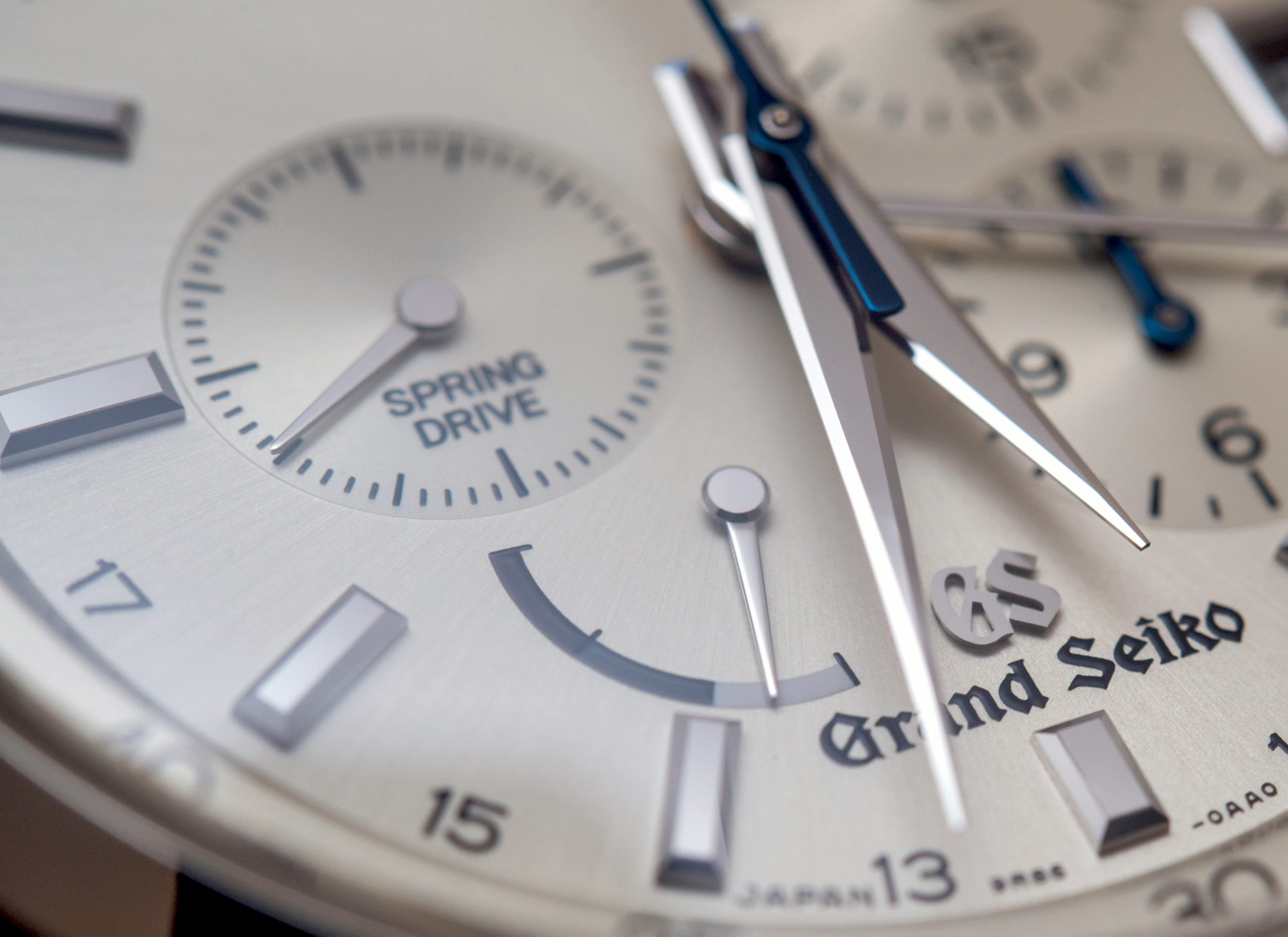 The view the crystal provides truly is like comparing a high-definition screen to an ordinary one: you possibly didn’t know you’d care for it until you tried it. There simply is more “resolution” as in the hands, the texts, and the subtle, refined details all show up with ease – not magnified, just more crisp, somehow. 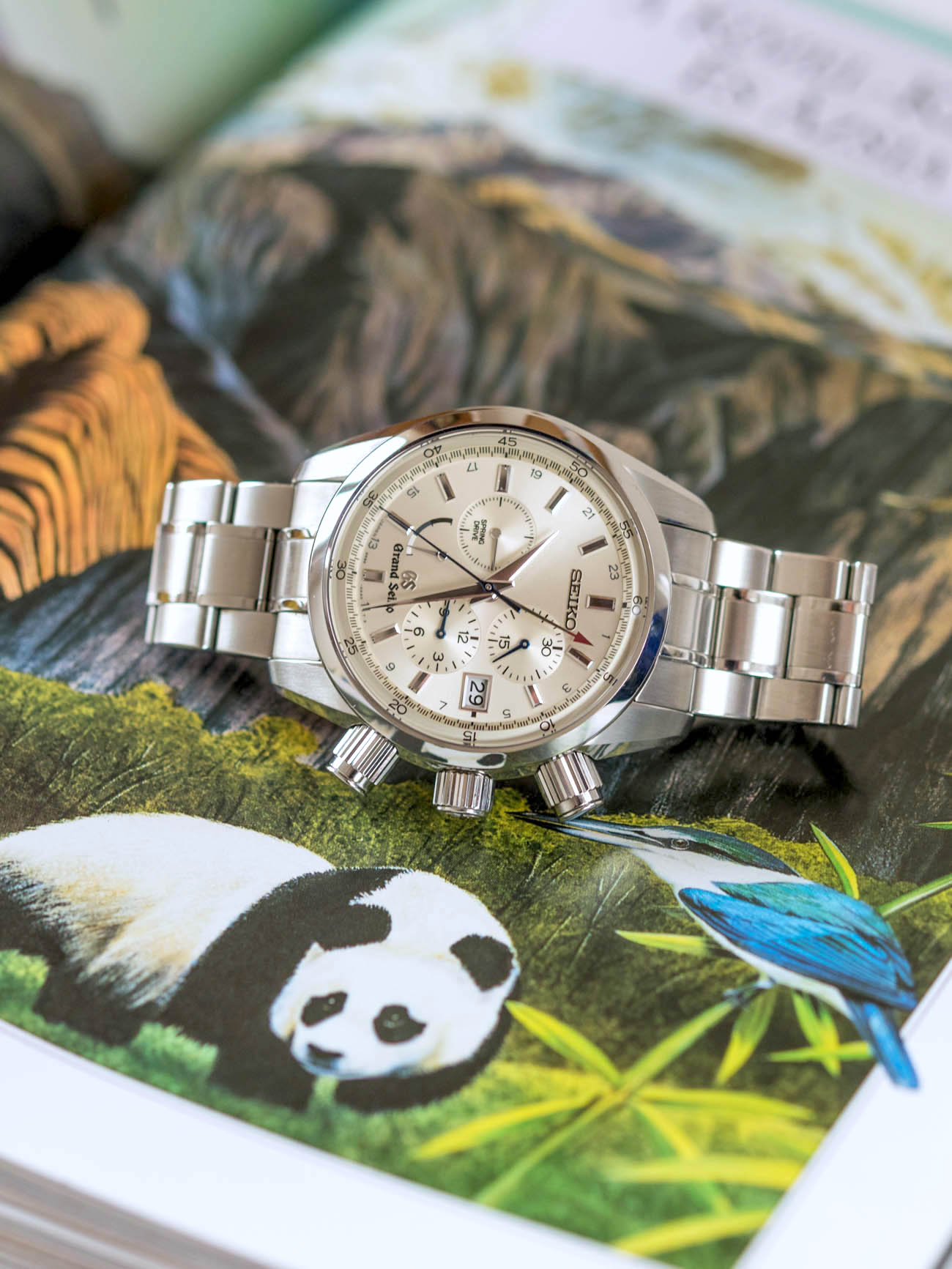 As is usually the case with double-domed crystals, there is a fair bit of reflectivity. You can just tell how the AR-coating struggles with neutralizing the much wider spectrum of reflections; a domed crystal sort of acts like a curved mirror in that objects located behind you but falling at a much steeper viewing angle still show up in the “mirror.” While I have seen noticeably better (meaning lower reflectivity) crystals on watches, as far as domed ones are concerned, this is up there with the best. 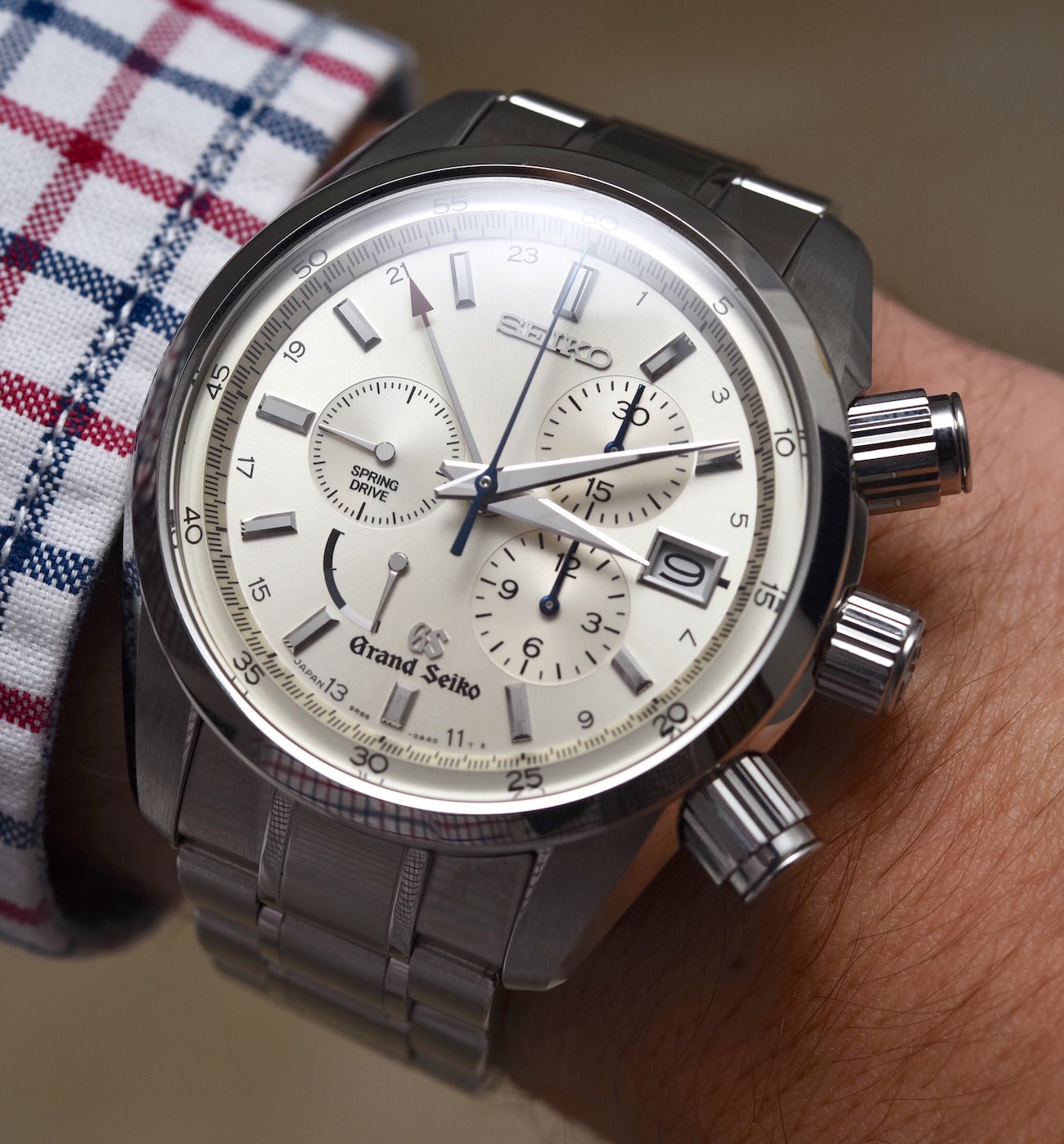 The dial design is dominated by its asymmetrical layout, with the chronograph sub-dials, as noted previously, taking up the right-hand side. While the resulting off-balance view may be an acquired taste, I personally found it very refreshing after the countless 3-9, 3-6-9 and 6-9-12 layouts we have seen countless times. 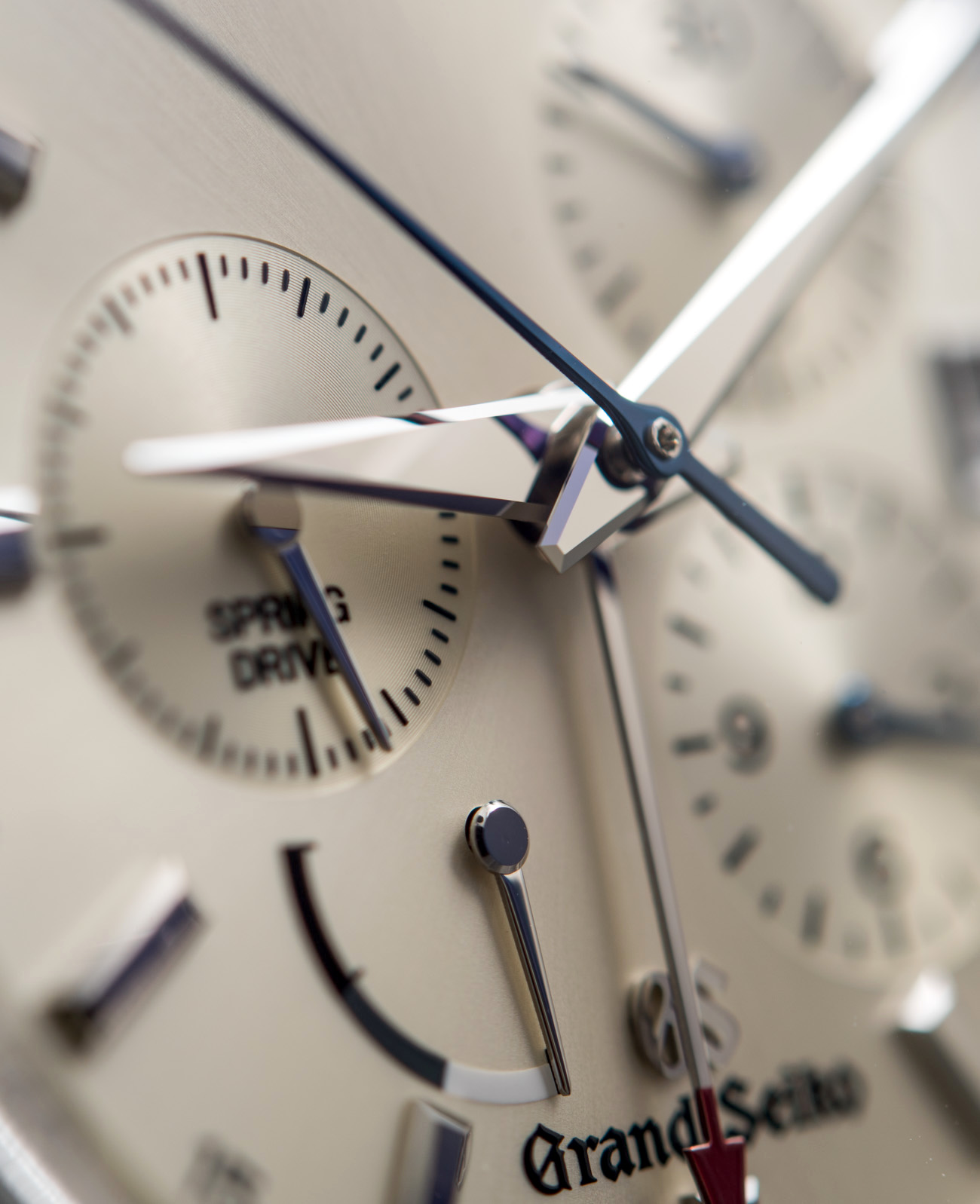 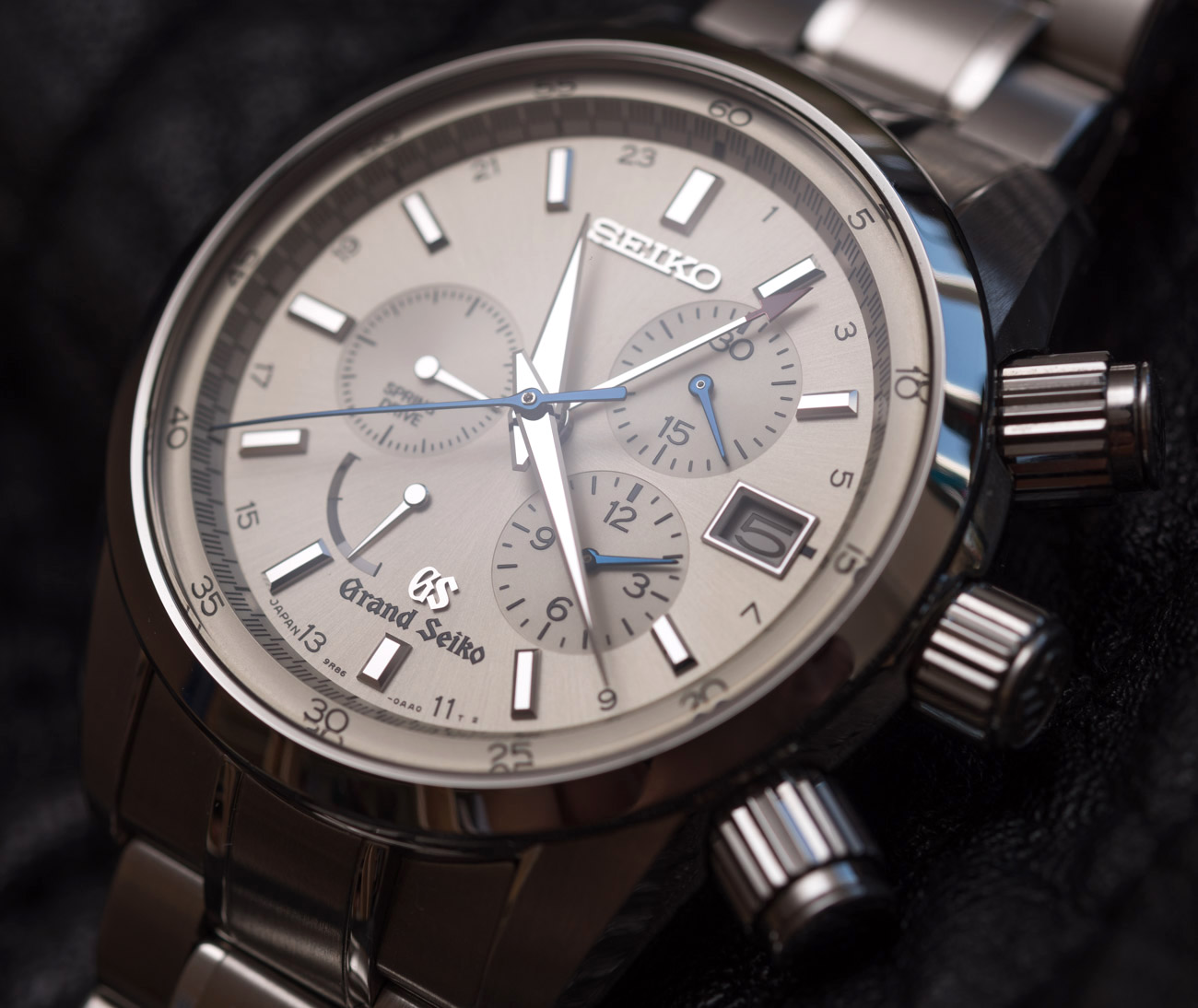 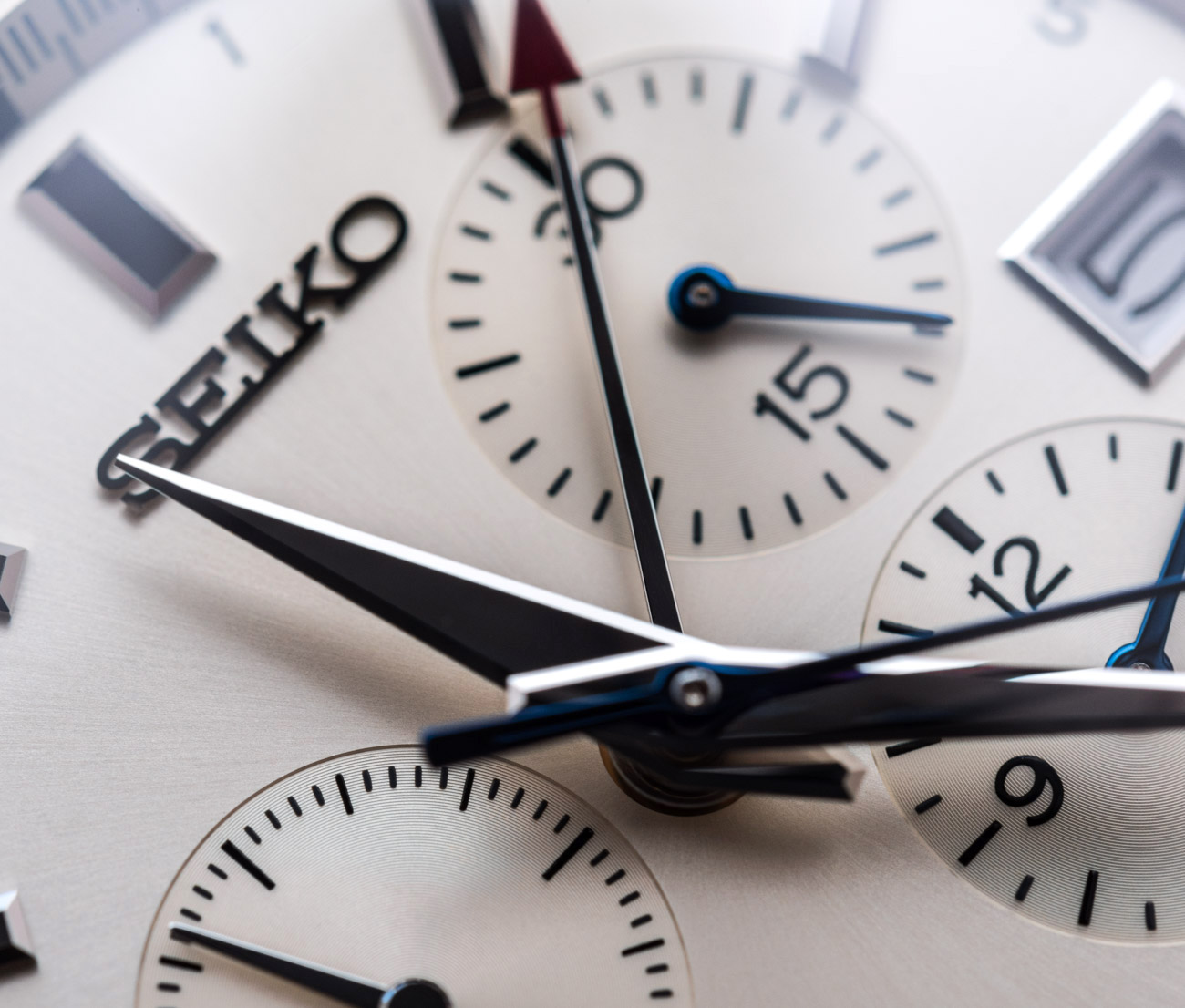 The term “black mirror finishing” may sound familiar to those really into fine watchmaking finishing techniques. What it refers to is a metal part that has a top surface so incredibly flat and perfectly smooth that it acts as a mirror of sorts. Hold it at the right angle and the impeccably flat surface will direct all light towards you – hold it the other way, and it will reflect all light away from you, creating a seeming pitch black surface. This technique, especially on parts this large, is pretty much exclusive to haute horlogerie pieces (this $1.1m Greubel Forsey will give you a good idea), yet, somehow Seiko managed to replicate it. 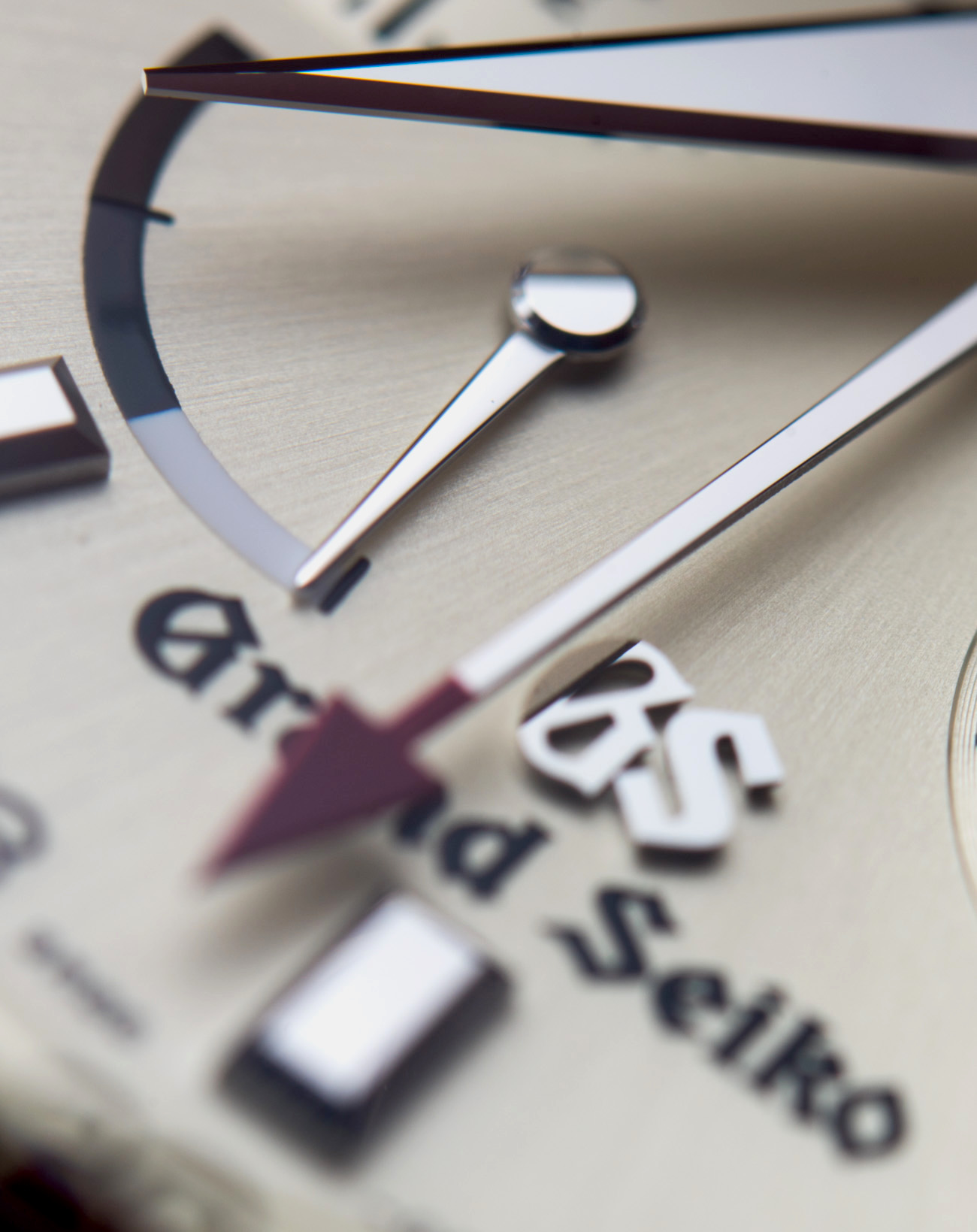 If there was just one element of the Grand Seiko Spring Drive Chronograph SBGC001 that would reflect (pun intended) all that you would need to know about how well it is made, it would be the handset. The edges have been beveled to create another mirror polished surface: when the top surface is black, the edges, for they are obviously always set at a different angle to the top, are shiny white, and vice versa. This means that, unlike is so often the case on high-end watches, no matter how light finds the dial and the hands, you’ll always find it easy to read the time. 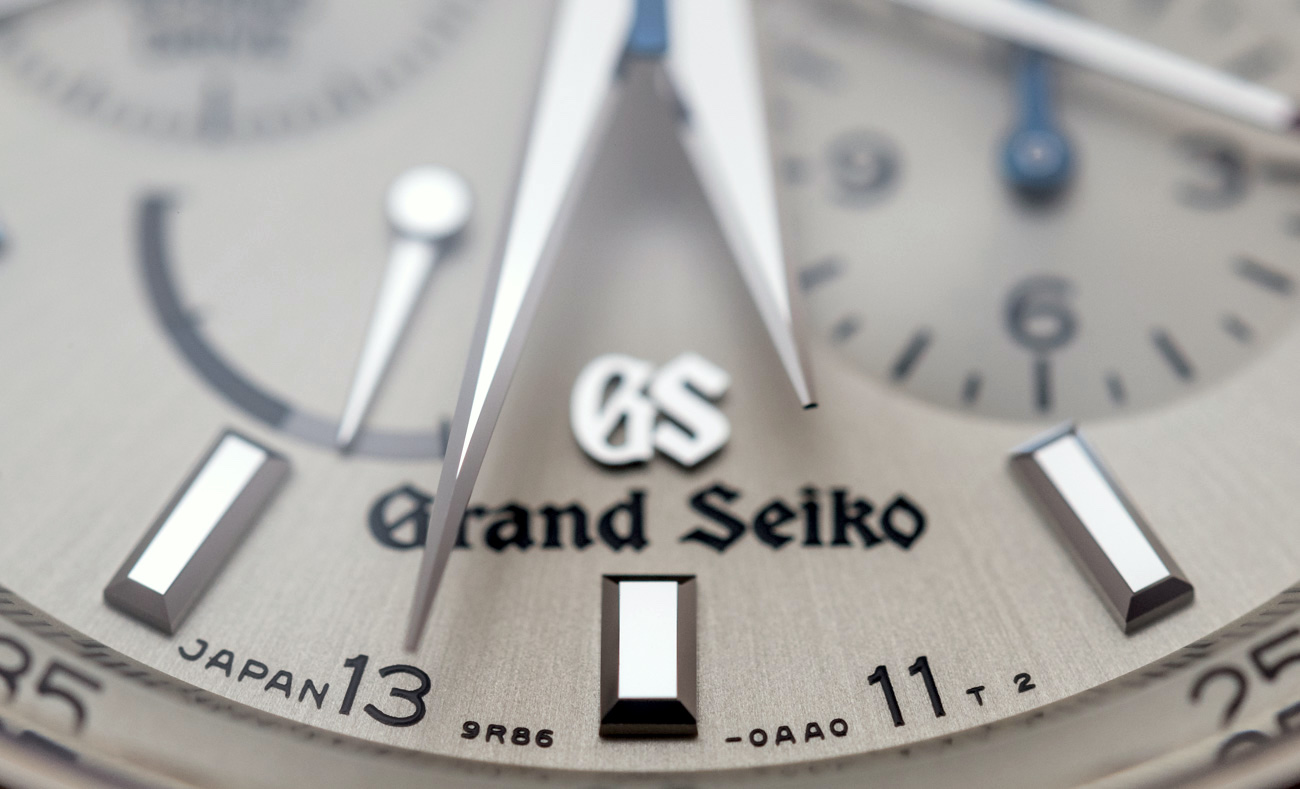 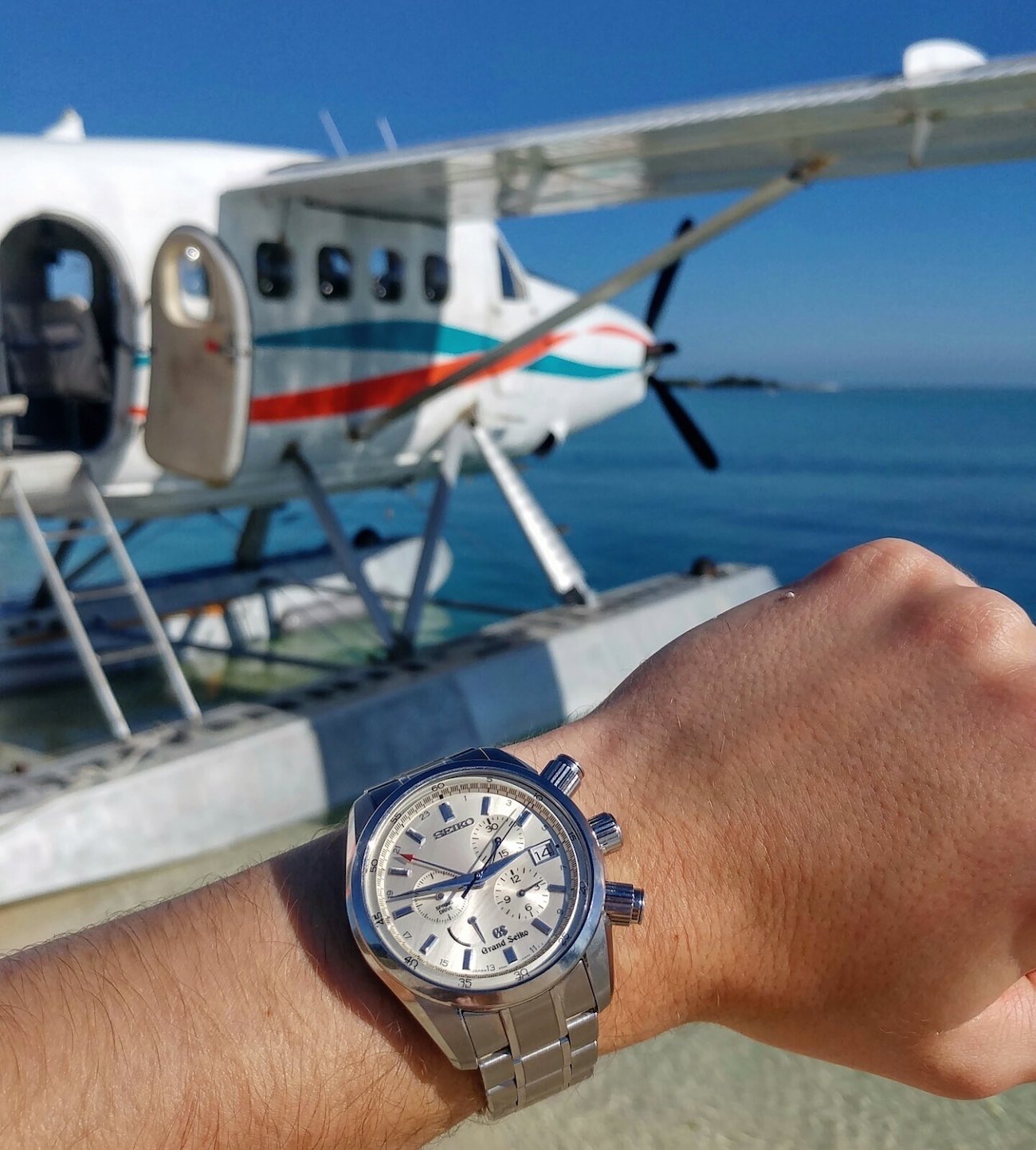 A quick story: upon taking the first closer look at the dial and hands of the SBGC001 after taking the plastic wrapper off I almost cried out loud saying “I can’t believe I received a Grand Seiko with dirt on the hands!” …but then I realized that I might have accidentally smudged the crystal as I was removing the plastic wrapper from around the case… and so what happened was that the hands had simply reflected the smudge of the crystal on their surface. Truth be told, I have never ever seen this happen on any other watch’s hands, not in person nor in the about 30,000 images I have taken so far – and I have handled a few hundred watches by now from $1 to $18 million.

Seiko has not added any of their amazing LumiBrite lume to the dial or the hands, so you’ll have to have at least a little bit of light to be able to tell the time. 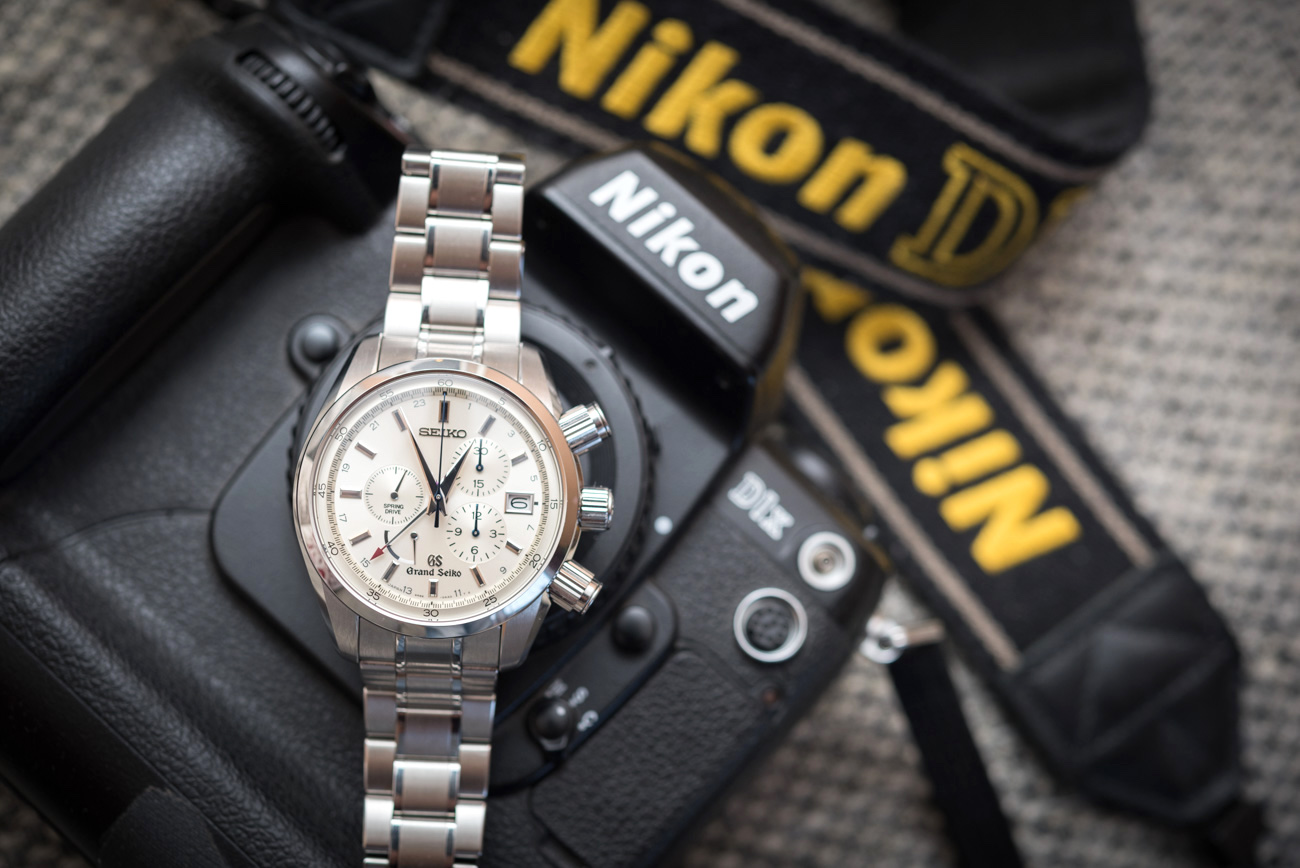 There’s no denying that I could ramble on for another 3,600 words (7,000, if you count the history article) about this watch, but by now you surely get my point – and hopefully the images have also helped you appreciate the finer details that are better seen than talked about. There’s a lot to love about the Grand Seiko Spring Drive Chronograph SBGC001 – and some that will, by design, not appeal to everyone. Incredible quality of execution, superb wearing comfort, accuracy, technical refinement, and a horological middle-finger of a movement all make the Grand Seiko Spring Drive Chronograph SBGC001 one of the absolute best watches on the market today – at any price. It’s so refreshing in every department, I’ll go see a doctor if I ever get bored with it. Price for the Grand Seiko Spring Drive Chronograph SBGC001 is $7,700 and, yes, you can buy it from authorized resellers outside of Japan. grand-seiko.com

Necessary Data
>Brand: Grand Seiko
>Model: Spring Drive Chronograph SBGC001
>Price: $7,700
>Size: 43.5mm
>Would reviewer personally wear it: Always.
>Friend we’d recommend it to first: The one able to appreciate truly fine details and do without the status symbol element in a luxury watch.
>Best characteristic of watch: Exceptional quality of execution; fantastic movement.
>Worst characteristic of watch: Wish there were a few more color options at this point. Tool-free micro-adjusting bracelets should not be exiled from dress watches – come on, Seiko!