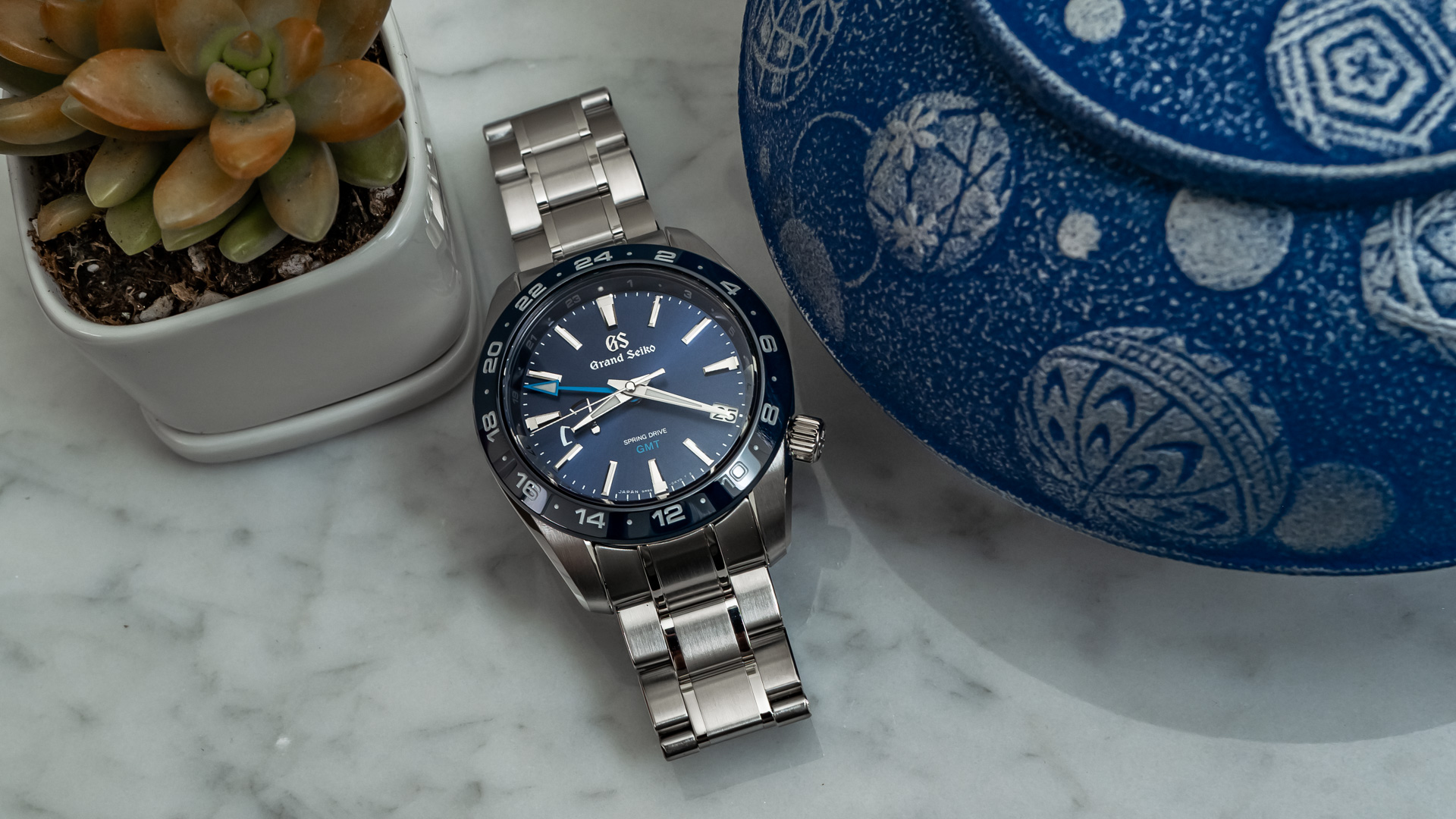 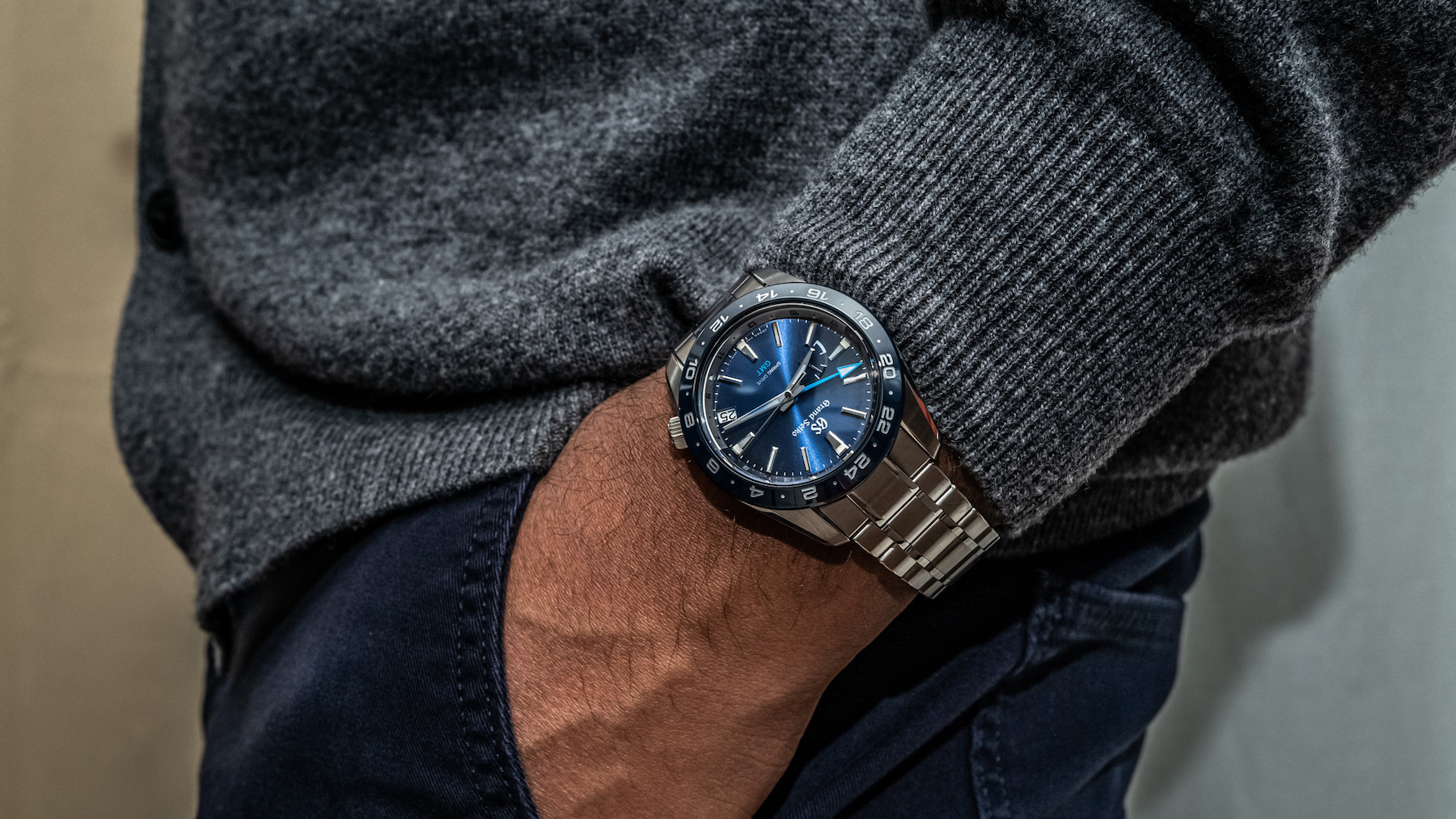 Grand Seiko makes many GMTs. At current count, there are no fewer than 40 watches that feature a GMT complication across the Elegance, Heritage, and Sport collections with options in Spring Drive, Hi-Beat, and 9F quartz movements. The issue, of course, has been that the sporty GMTs with Spring Drive or Hi-Beat movements have only been available in a hefty 44mm-wide case. That is, until recently.

The calls for a smaller GMT reached a steady din over the last few years, and in 2020, Grand Seiko delivered a new collection of 40.5mm-wide Spring Drive GMT watches with a new ceramic bezel, 200M of water resistance, and a new bracelet with a micro-adjust. This is the Grand Seiko GMT that so many of us have been waiting for and it’s also one of the most well-finished and toughest travel watches out there at its price point, and above. As of now there are four versions of the 40.5mm Spring Drive GMT: the SBGE253 with black dial and black bezel; the SBGE255 seen here with blue dial and blue bezel; the SBGE257 with green dial and green bezel; and the LE SBGE263 ‘Eagle’ dial for the U.S. market. These also have a new fixed ceramic bezel, unlike the larger 44.2mm Spring Drive GMT which has the sapphire crystal insert over the rotating bezel. 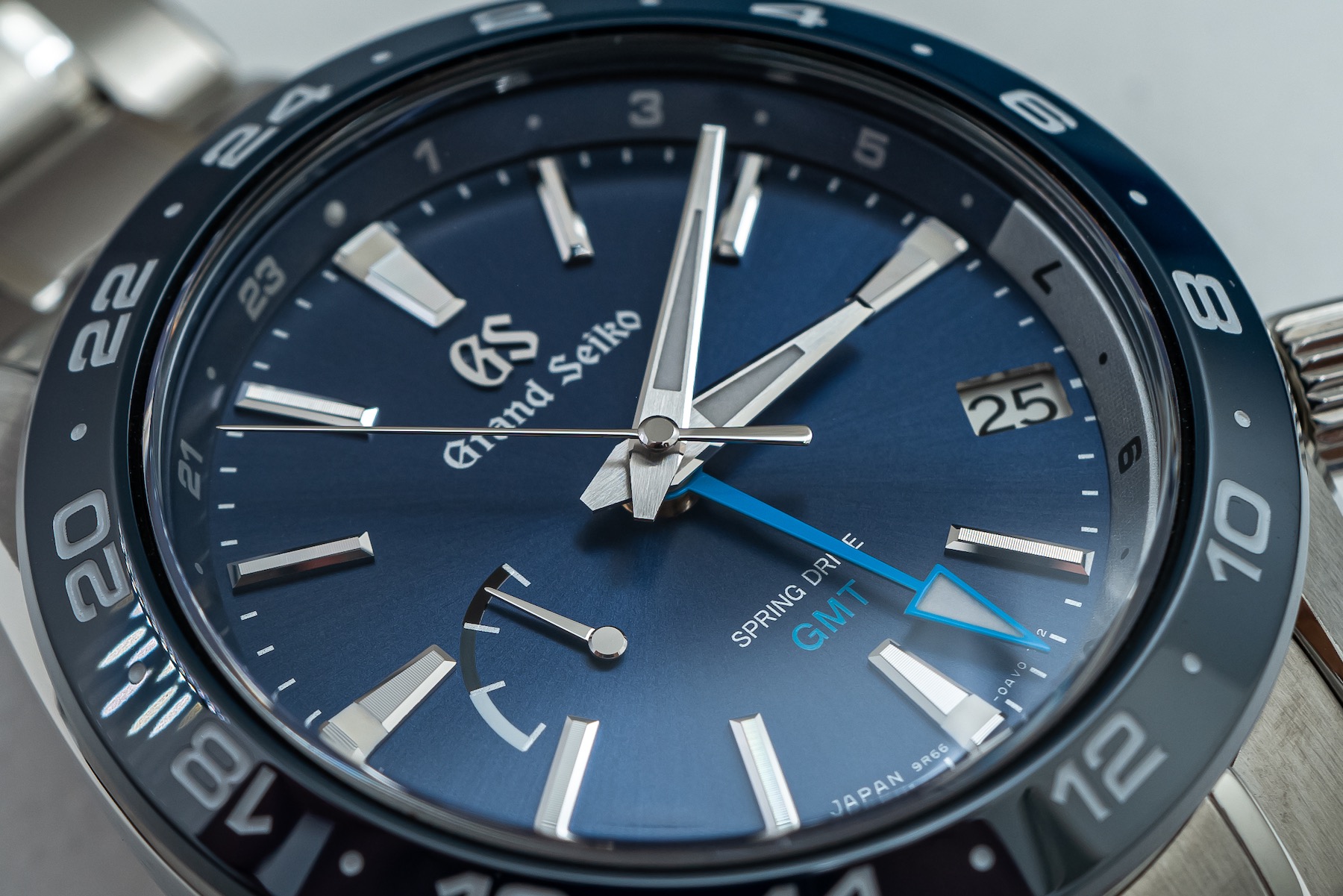 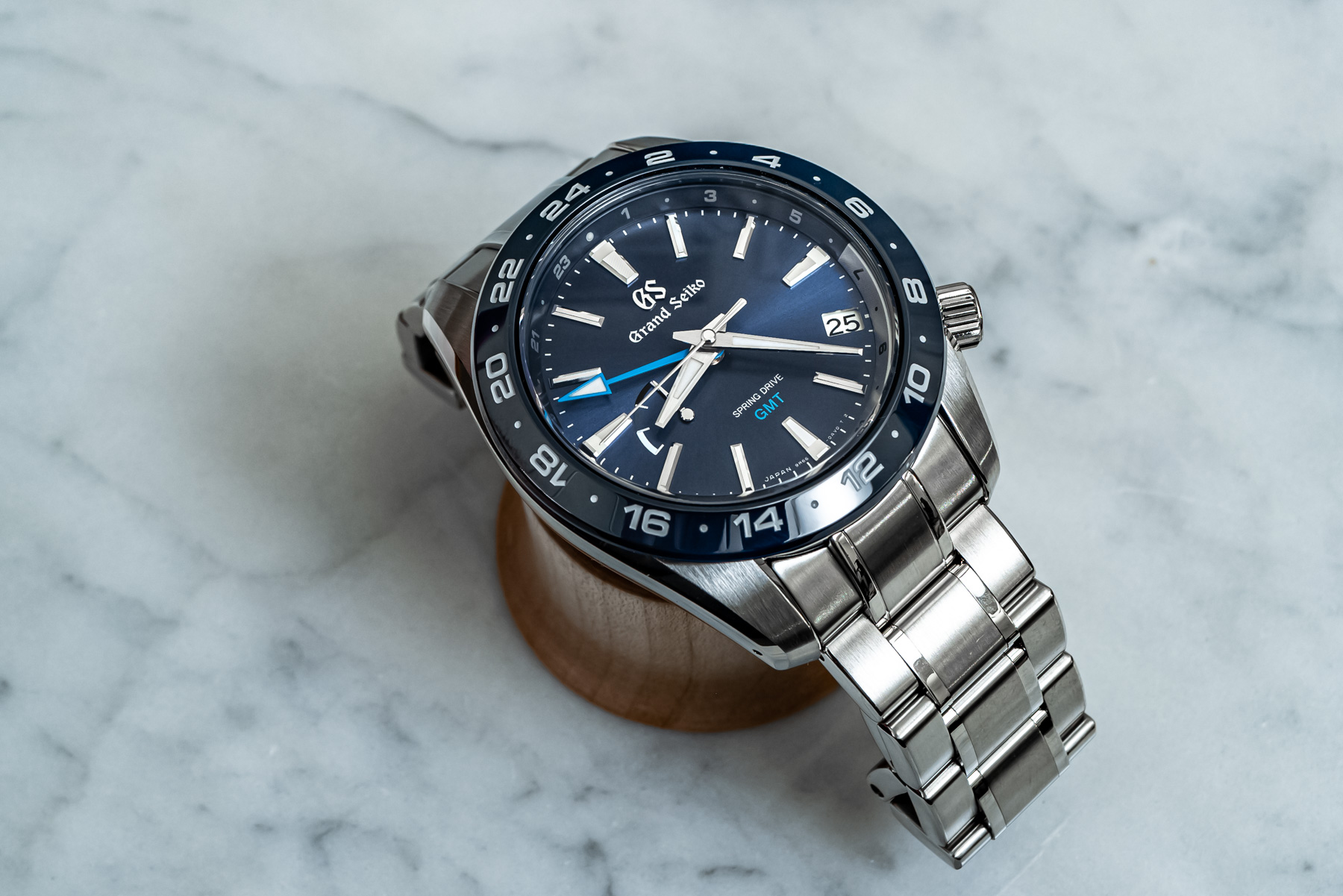 Naturally, the SBGE255 and its stablemates are “true” GMTs that have an independently adjustable hour hand for local time. The first position of the crown allows you to set the hour hand, and the second position adjusts both local time and GMT hands. This makes it so there is no quick-set date function, but the independent hour hand easily allows you to move both forward and backward when setting the date. While it’s certainly possible that the minds at the brand are already working on it, Grand Seiko has not released a two-color ceramic bezel the likes of which you can see on Rolex and Omega GMT watches. Due to this, the rehaut (chapter ring) has the day/night colors in silver and blue with odd numbers from the 24-hour scale that complement the even hours on the bezel.

As with any fixed-bezel GMT, these new Grand Seikos allow tracking of two time zones and not three. Some will find this to be unacceptable, and that’s reasonable if you need that functionality, but I think two time zones is more than sufficient for a vast majority of people. And again, just because Grand Seiko didn’t have a rotating ceramic GMT bezel version at launch doesn’t mean we won’t get one in the future. 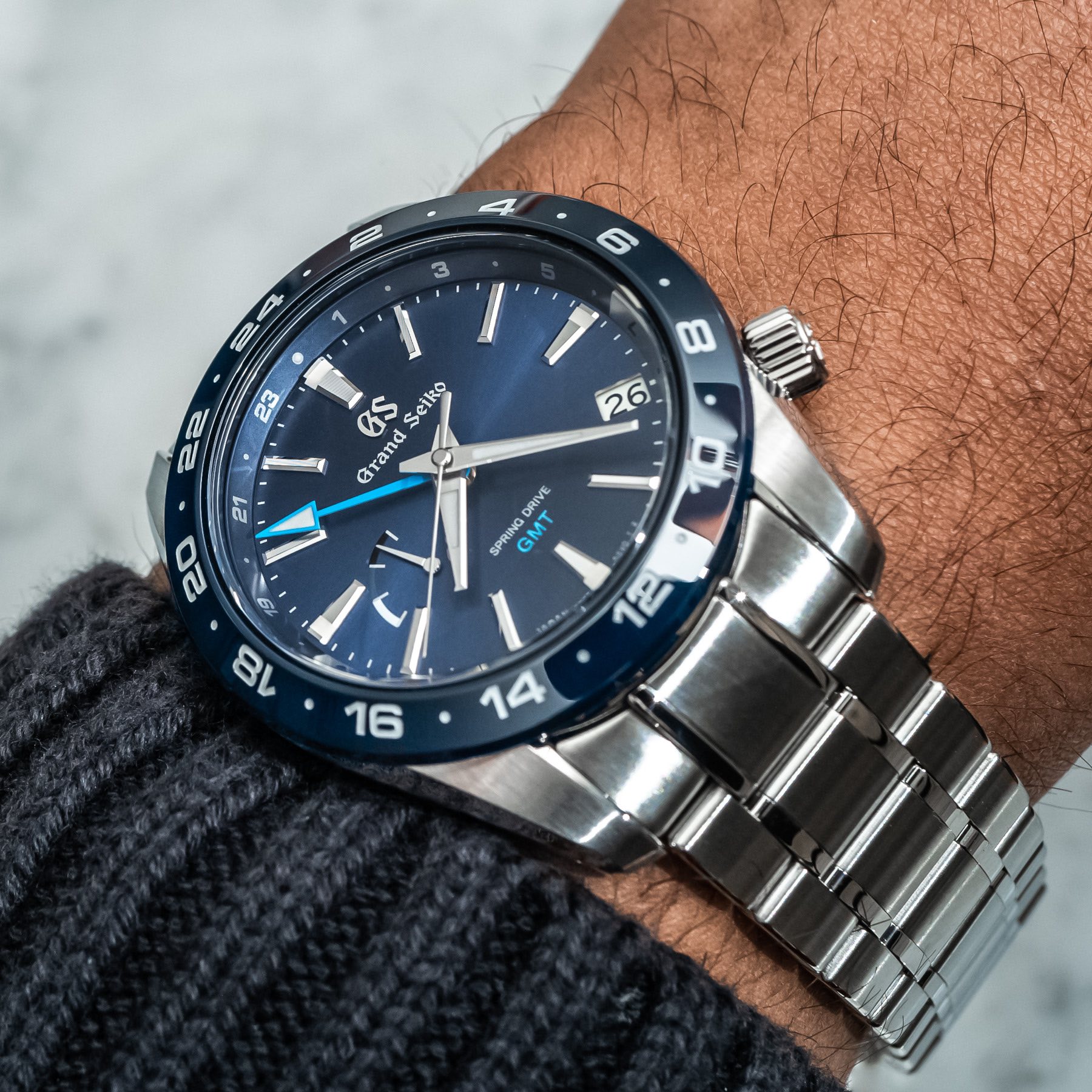 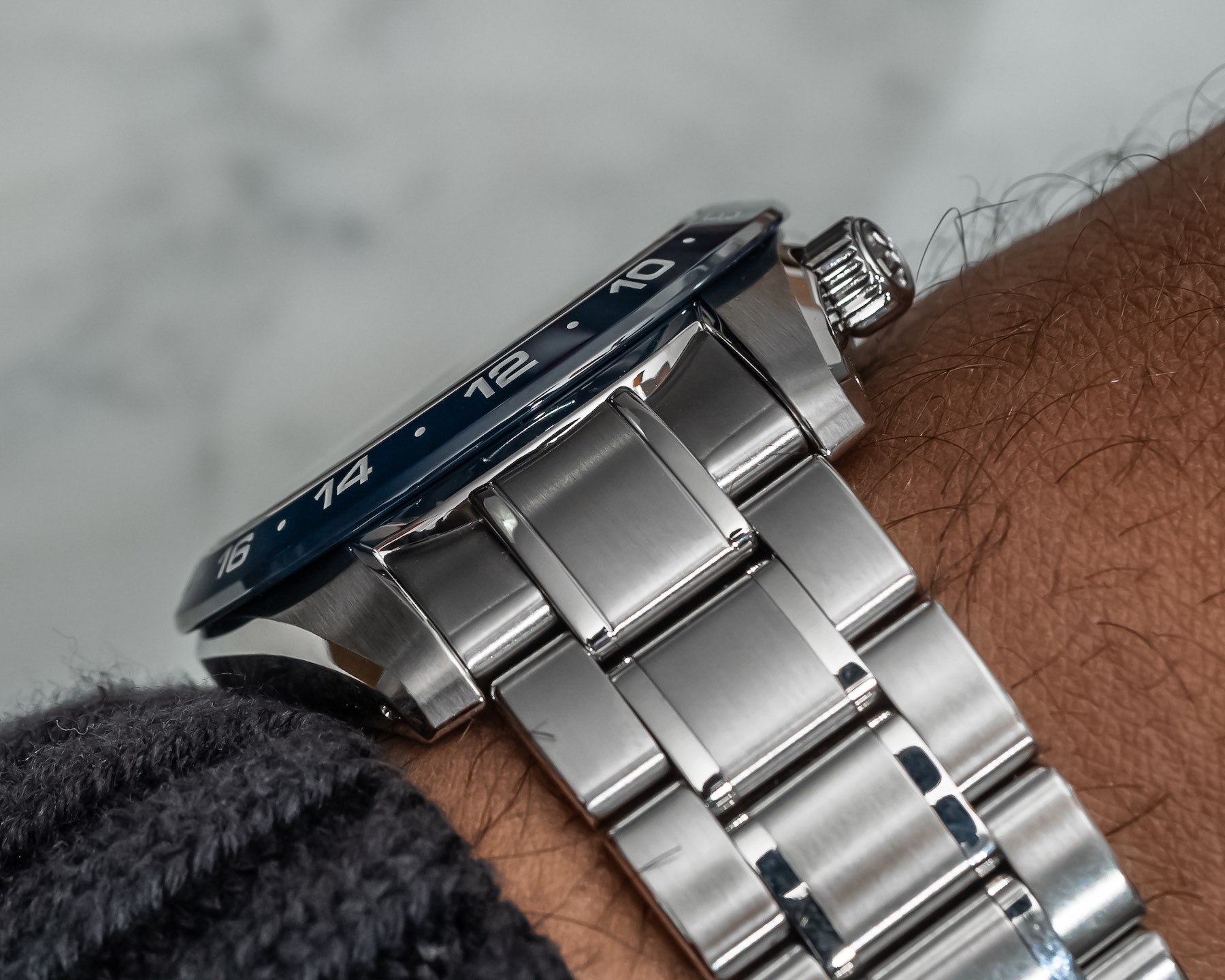 Measuring 40.5mm-wide with a 48mm lug-to-lug height (the end links extend a bit and measure 51mm) and 14.7mm-thick with 200M water resistance, the SBGE255 and its stablemates have been a long time coming for so many who found the 44.2mm case to be prohibitively large. It’s not the thinnest GMT out there, but it’s far from the thickest. For comparison: The Rolex GMT Master II measures 40mm-wide/48mm L2L and 12.4mm-thick; the Tudor Black Bay GMT is 41mm wide/50mm L2L and 14.8mm thick; the Panerai Luminor GMT PAM1535 is 42mm-wide/52mm L2L and 13.5mm-thick; and the Omega Seamaster Planet Ocean 600M is 43.5mm-wide/50mm L2L and 17mm-thick (albeit with serious water resistance). If you want to go even further, the Omega Seamaster Aqua Terra GMT Worldtimer comes in at 43mm-wide/50mm L2L and just about 15mm-thick.

In short, other than the Rolex GMT-Master II and the Explorer II, we are seeing the Grand Seiko basically into average case thickness among competing GMT watches. 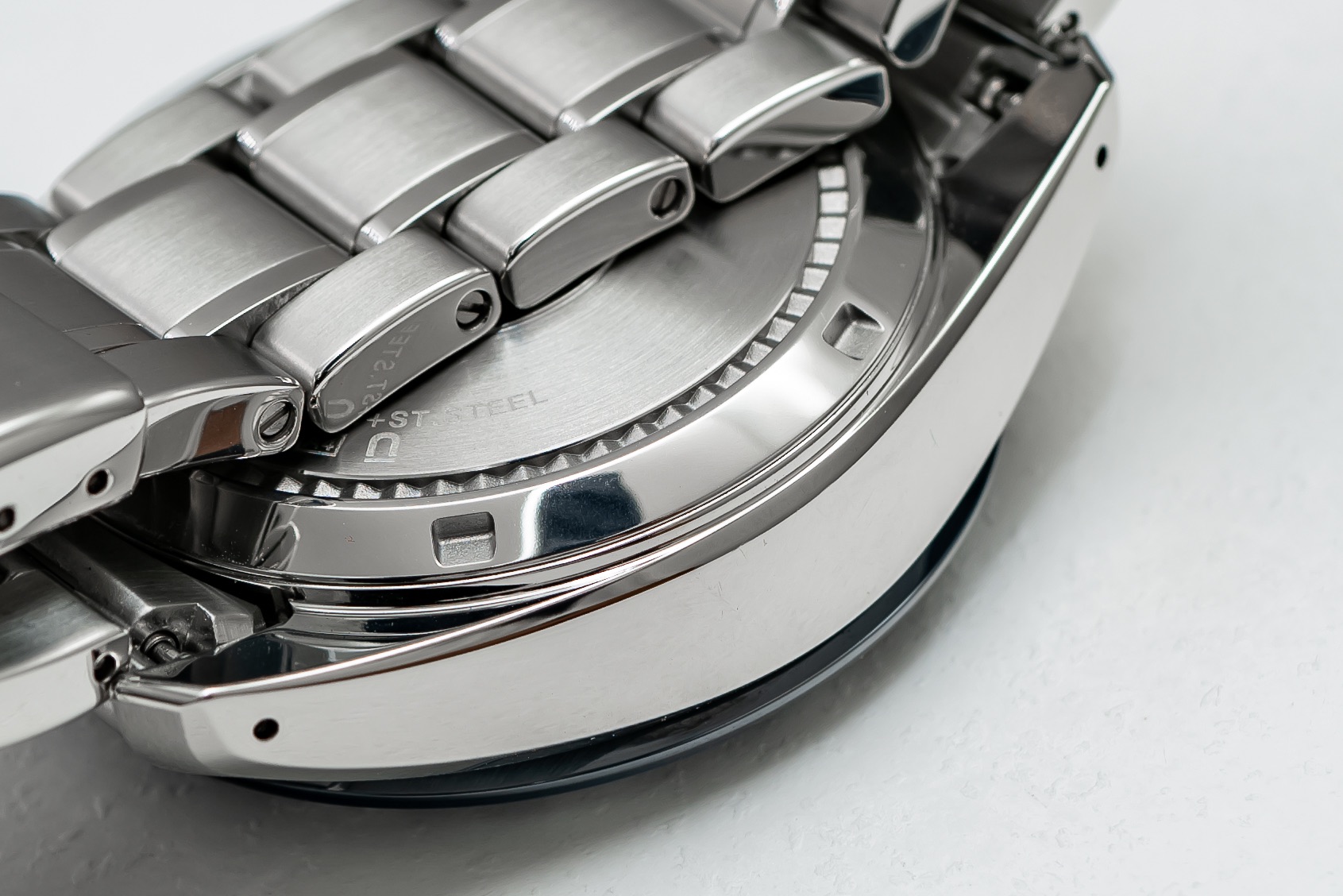 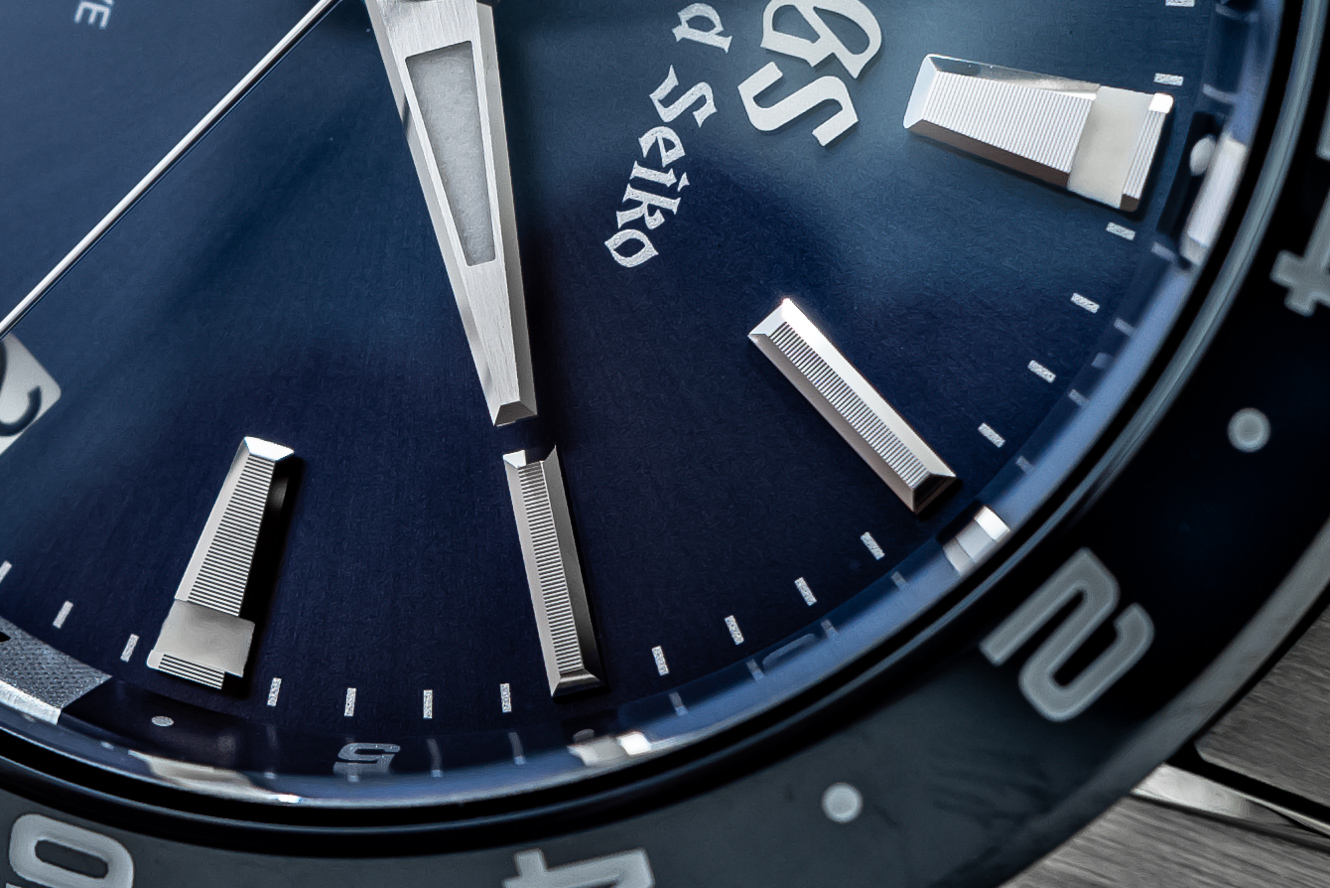 Zaratsu (And A Small Gripe)

This new case has the hand-finishing you’d expect from Grand Seiko with alternating brushed and Zaratsu-polished surfaces, as well as some nice chamfering along the sides. The hand-finishing applies to the dial, as well, with the diamond-polished hands and indices, the latter of which has some of the finest facetings I’ve seen both at this price point, and above. These faceted indices glimmer when they reflect light and, beyond aesthetics, it also really enhances legibility in low light. Speaking of legibility, it’s very good overall when you consider the sapphire crystal has a single layer of AR coating, as opposed to double. A little glare is unavoidable, but even the shots I took under direct light are legible. 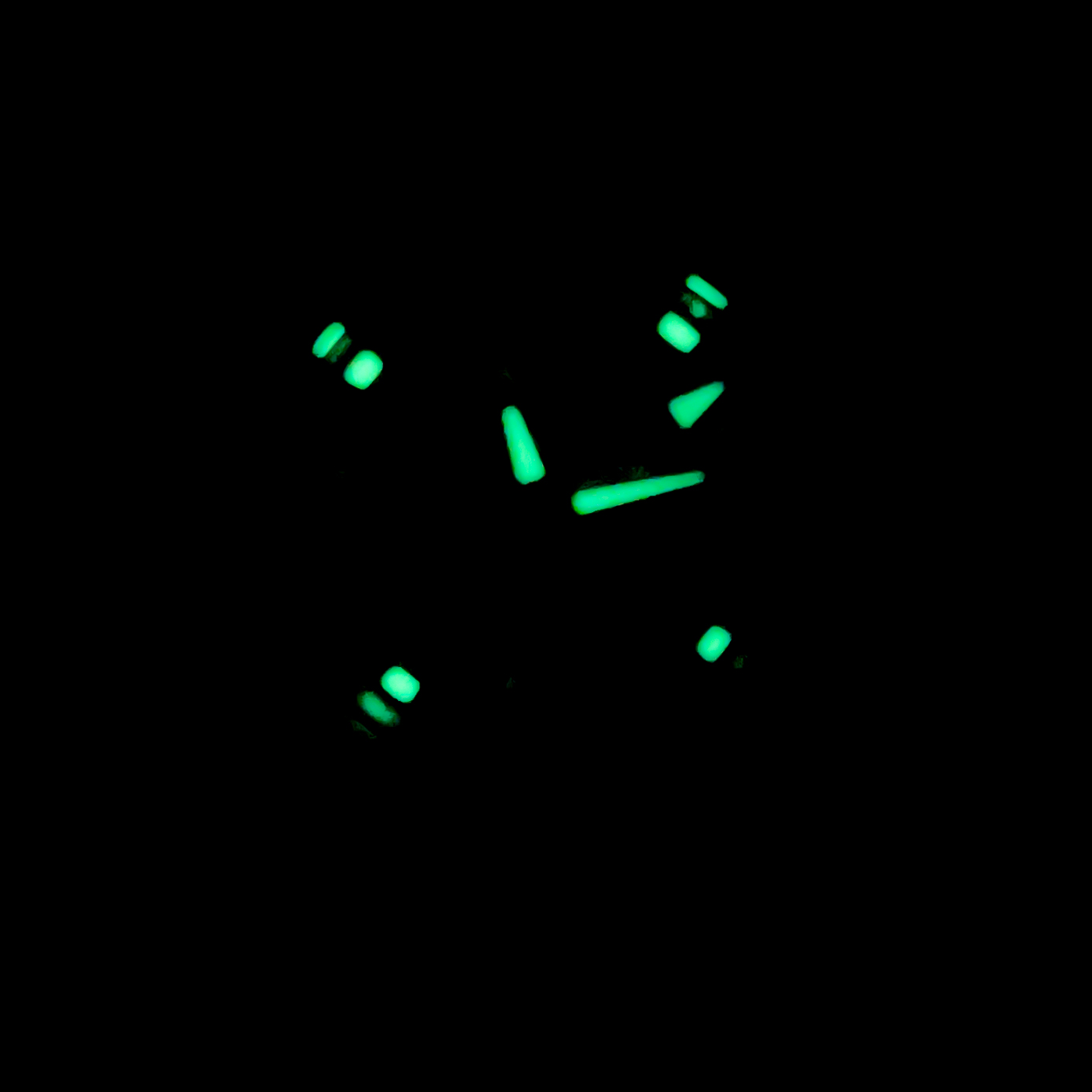 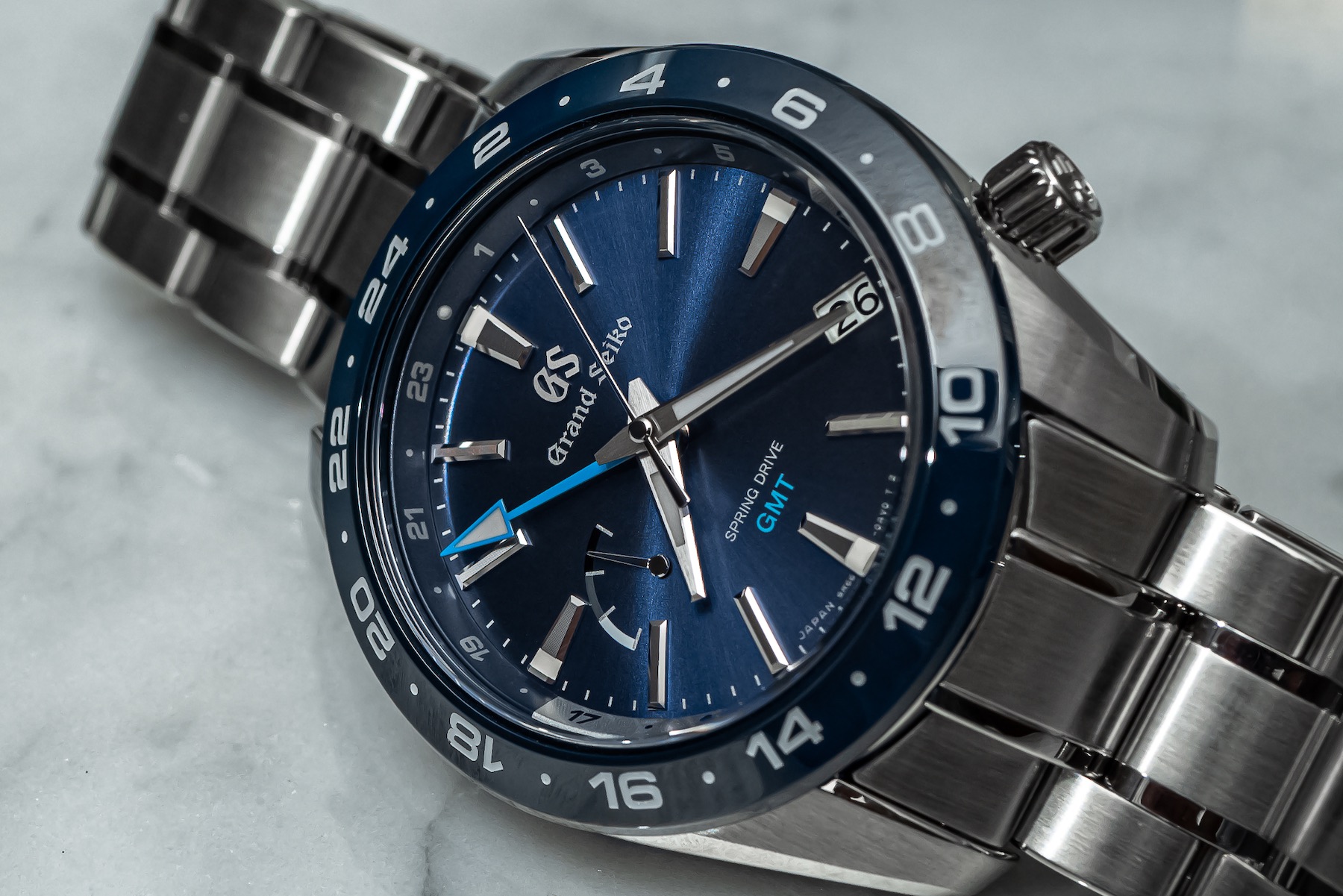 If you’re like me and don’t fall victim to the “dial symmetry trap,” then the date window at 4 o’clock and power reserve indicator between 8 and 9 o’clock are inoffensive, at worst. The topic of the Spring Drive power reserve indicator has been litigated for years now, and I don’t think anything about these new GMTs will change any minds to swing in a different direction. You like it (or at least tolerate it), or you don’t. 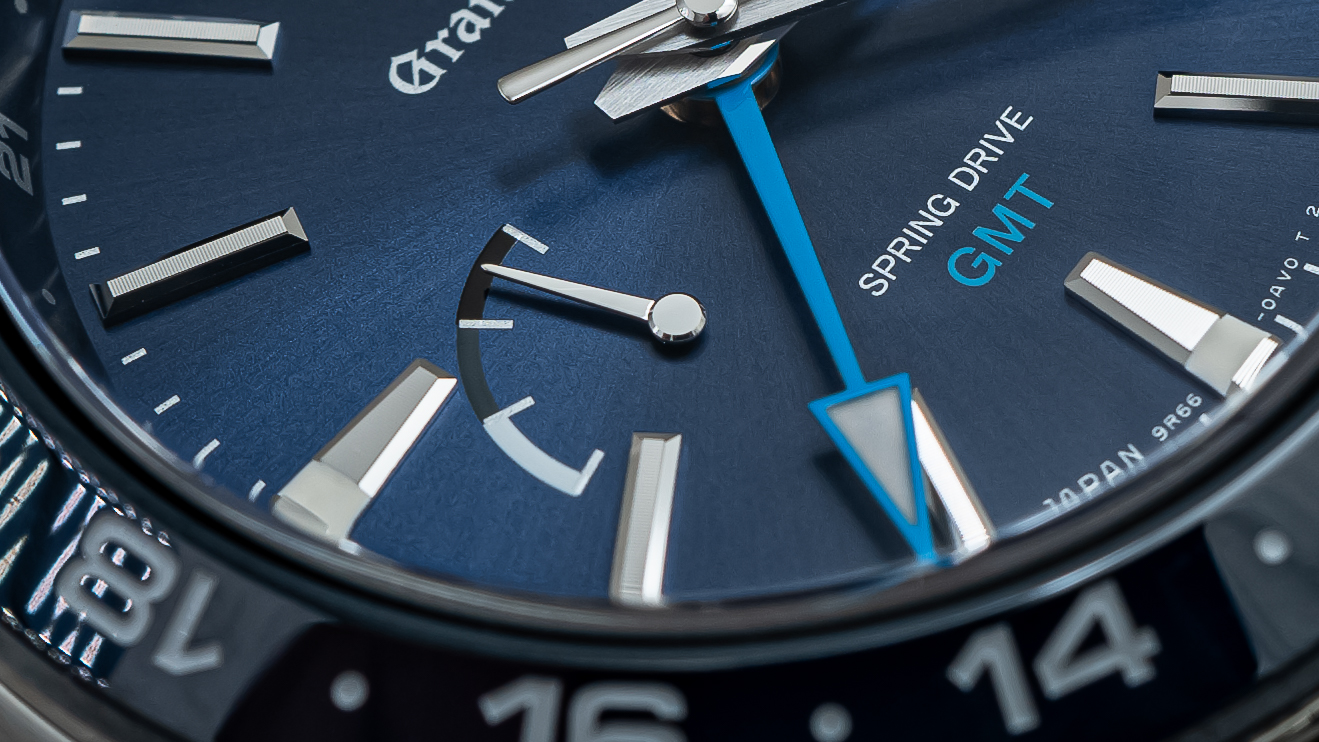 I do have a small gripe with the execution of the power reserve indicator. The white, gray, and black sections of the scale don’t really match up with the painted indices, and the result just lacks some of the refinement I’ve come to expect. Though it’s not really perceptible without a loupe, it stands out because the rest of the dial elements are so well executed. Grand Seiko sets the bar high with its dials, and I hope this relatively minor and easily fixed flaw is addressed. 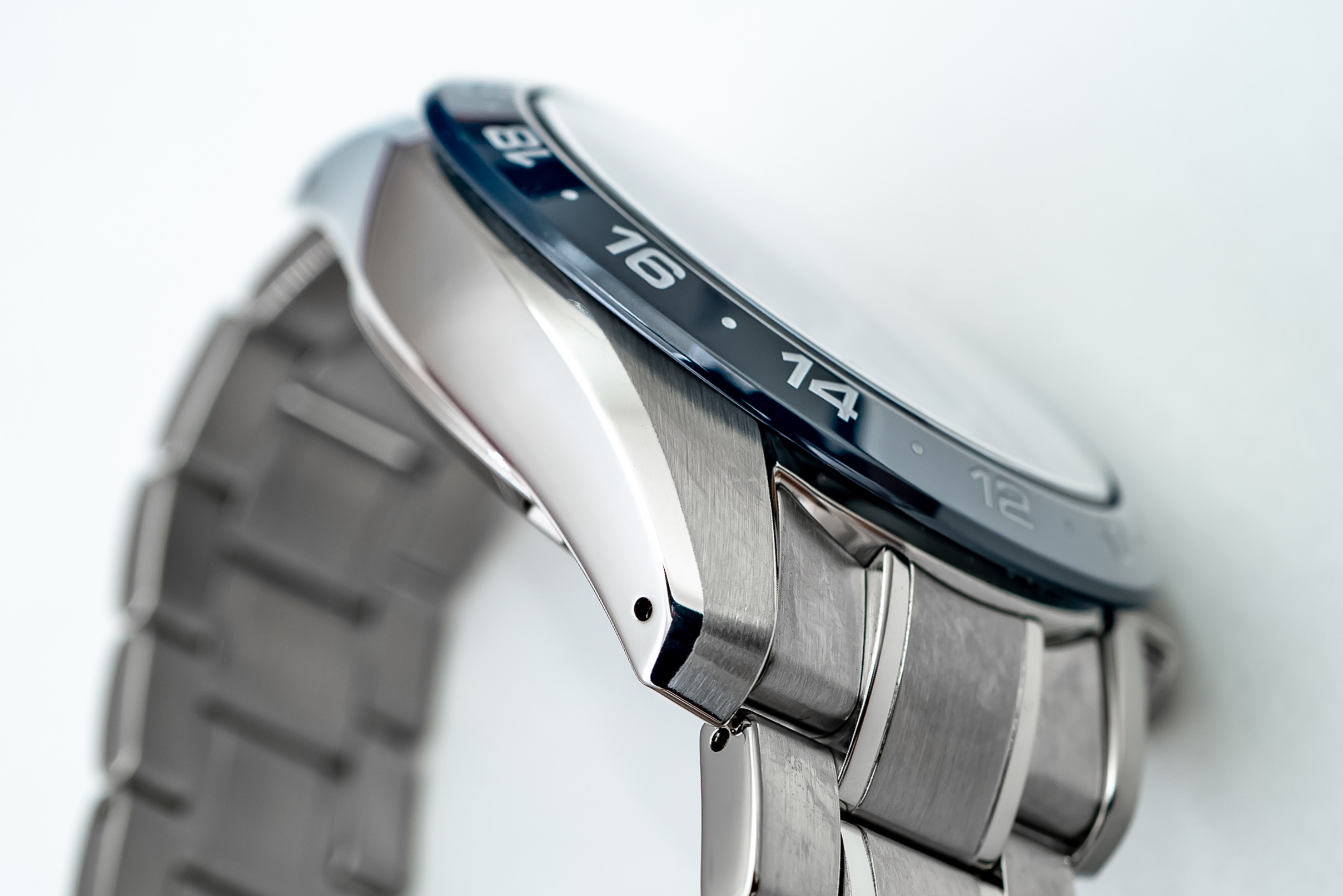 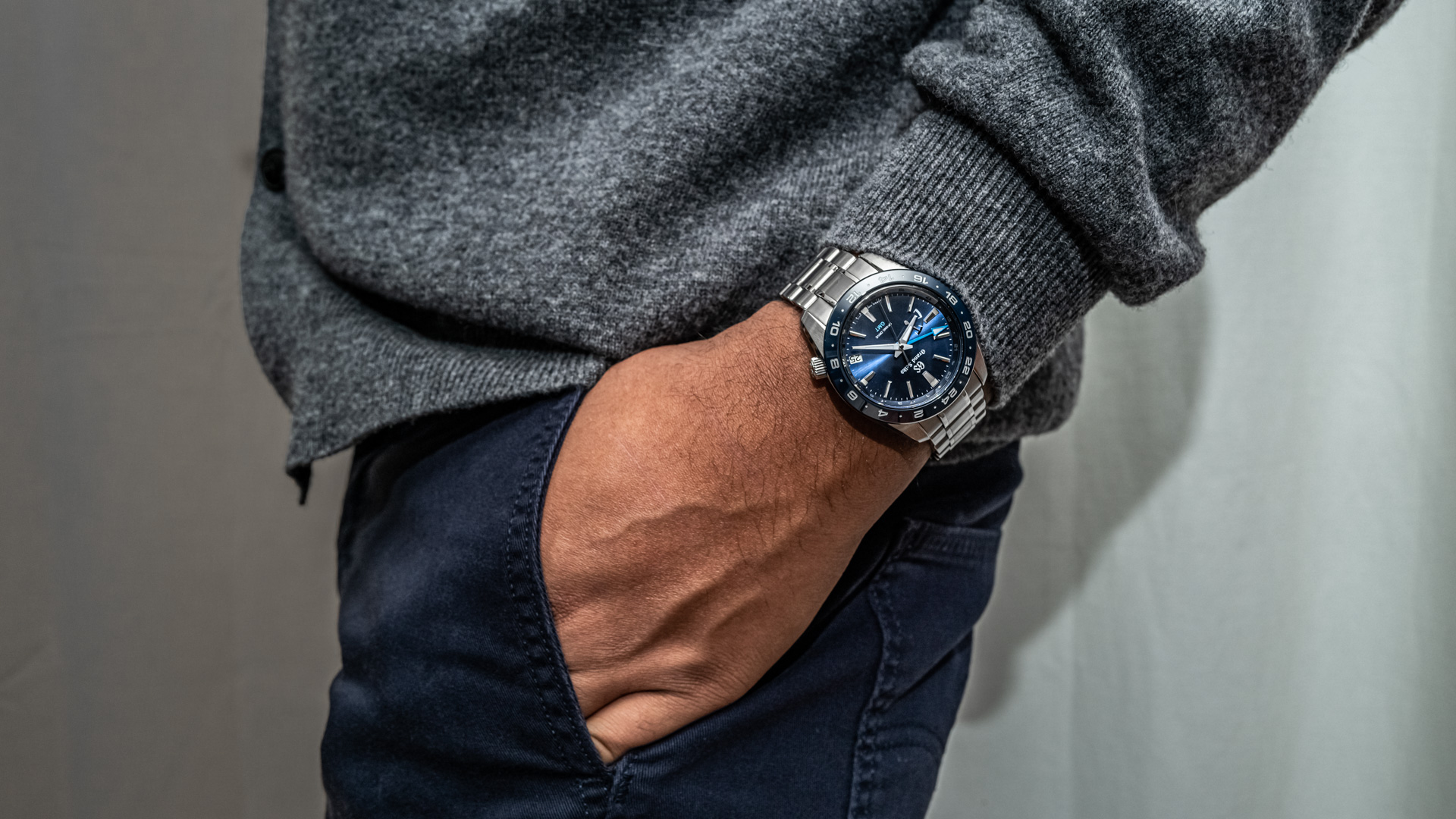 In terms of finish and quality, the case is as good as it gets. The new 40.5mm steel case size wears very comfortably and is pretty balanced on the wrist. Yes, on paper it is on the thick side at 14.7mm, but the polishing and beveling on the case, along with the slope of the ceramic bezel, goes a long way in detracting from the heft. While not a direct competitor as far as price goes, it’s actually a little slimmer than something like the Tudor Black Bay GMT (and has just as much water resistance). As for case and dial finishing, I am open to hearing suggestions that are comparable not just at this mid-four-figure price point but in the low five-figures. You just won’t find this level of case finishing from Rolex or Omega, let alone anything hand-finished.

And yes, the end links fit perfectly snug, and I don’t see any noticeable gap between them and the lugs. 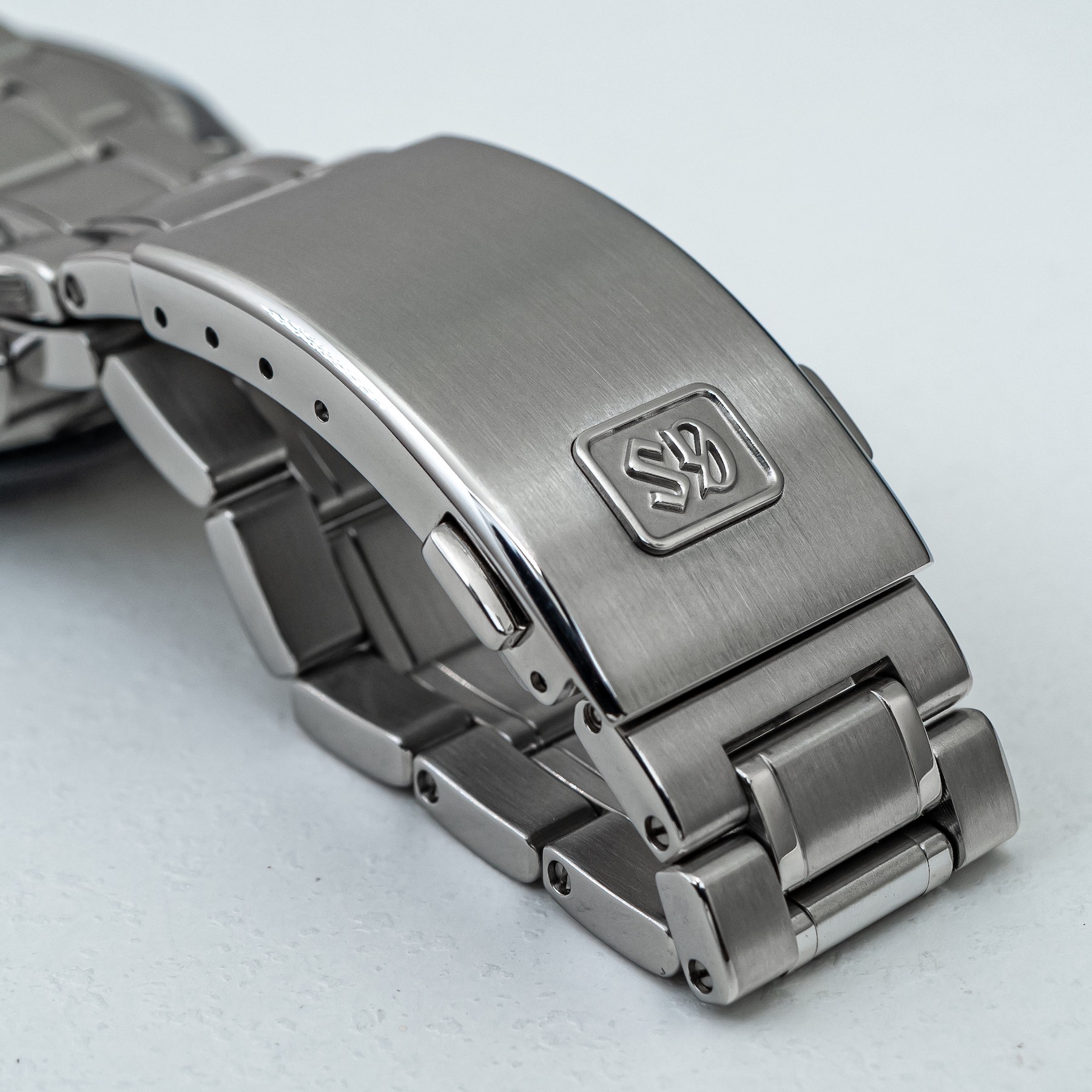 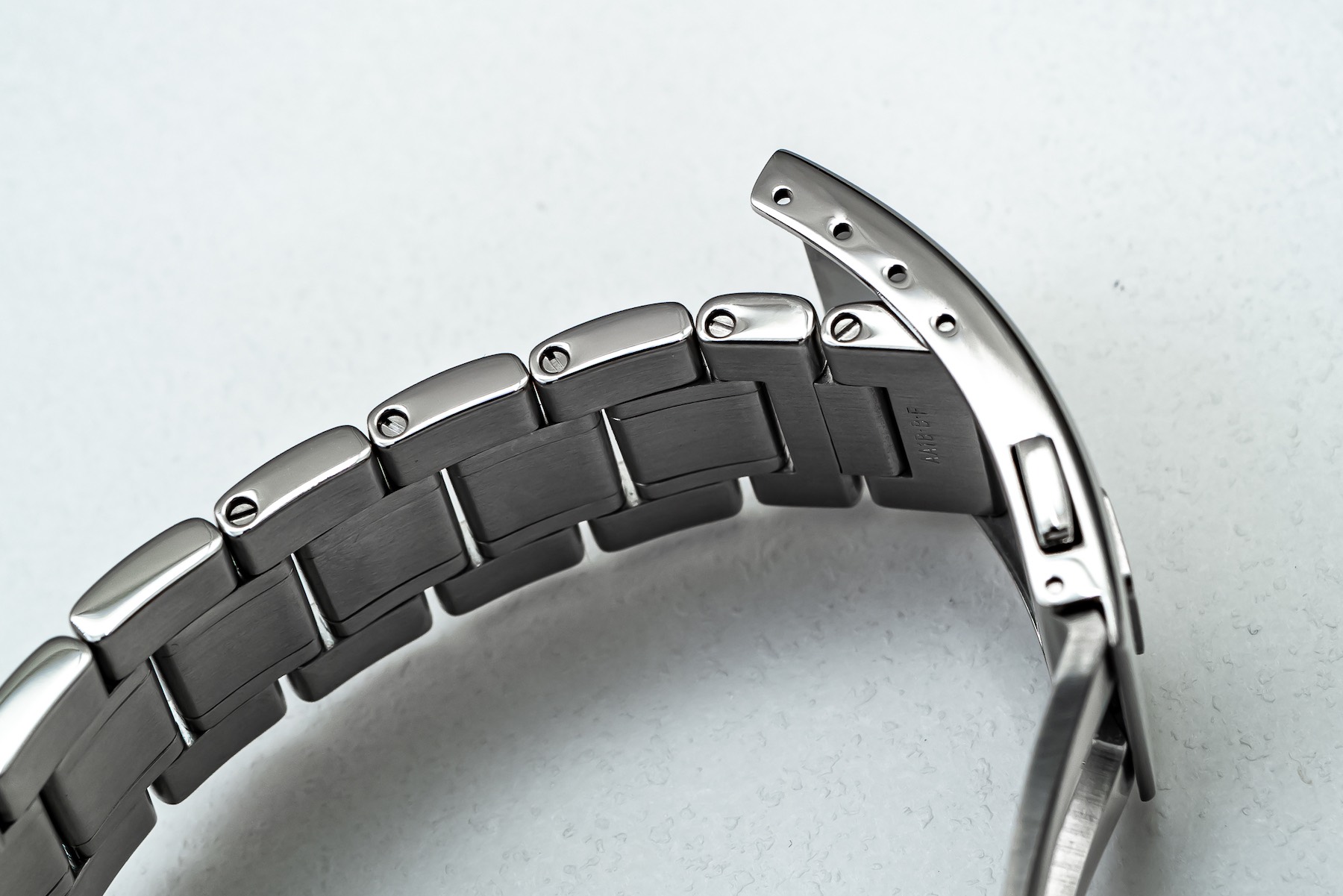 These new Spring Drive GMTs come equipped with a new and refined bracelet with micro-adjust clasp that Grand Seiko fans have long called for. The three-link bracelet is done in brushed steel with subtle polished beveling along the edges of the outer links (that echoes the chamfering on the side of the case), as well as polished flanks on the center link. Very nicely finished and comfortable to wear, Grand Seiko has upped its bracelet game here. While I wouldn’t say the bracelet is on the same level as the case or dial, it is a significant improvement and does not stand out as incommensurately finished (which you can argue the previous ones were).

Grand Seiko confirmed to me that this new bracelet will also be available to order separately via the brand’s service center. 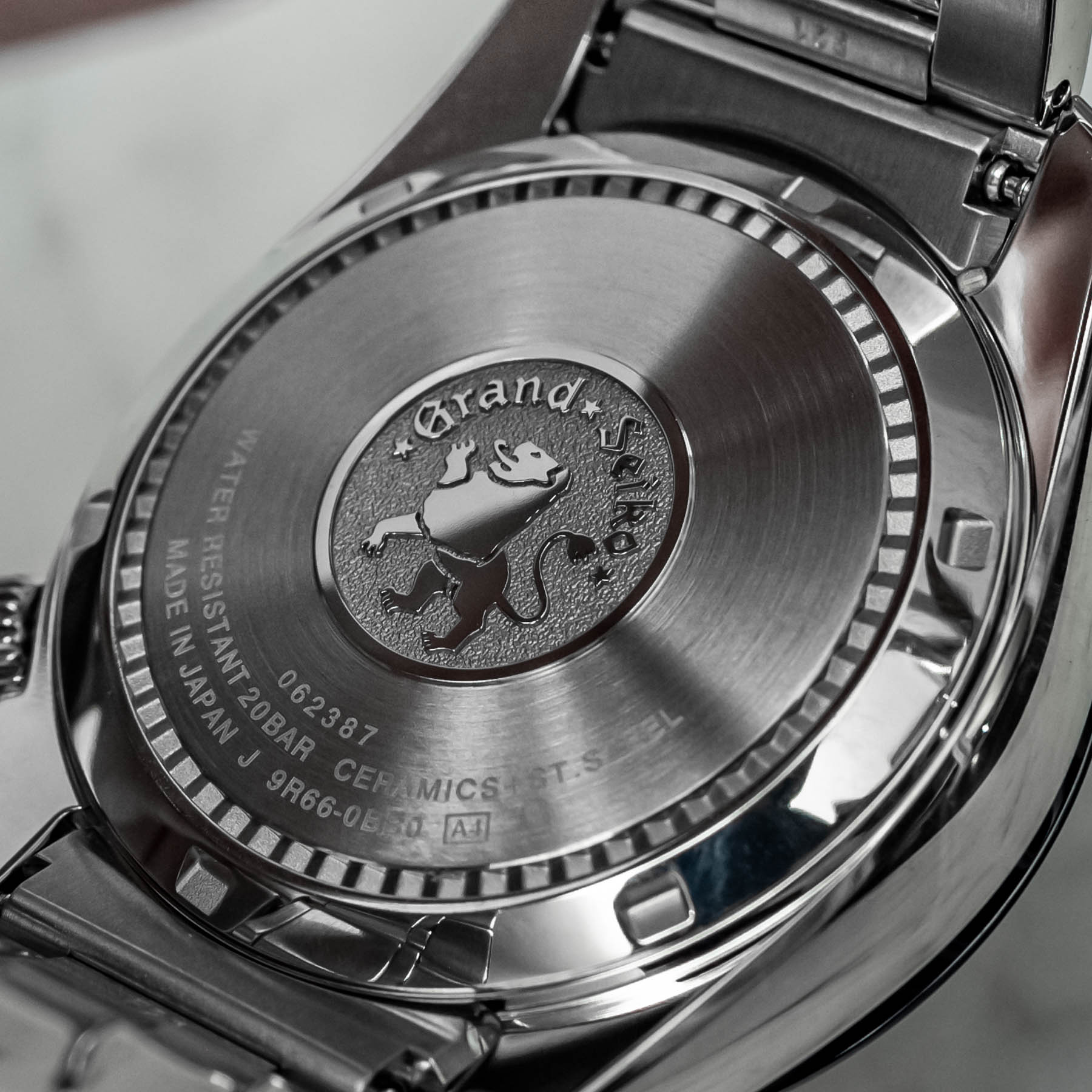 Beneath the enclosed case back is the Caliber 9R66 Spring Drive movement, which has been Grand Seiko’s go-to Spring Drive GMT since it was introduced back in 2006. If you’re not familiar with Spring Drive, I highly recommend this article explaining it, but in brief, it is largely a mechanical movement that replaces the escapement with what Seiko calls a “tri-synchro” quartz regulator. It does not use a battery and is powered by a mainspring, like every mechanical movement. It is not a quartz movement or a hybrid meca-quartz — it is a Spring Drive. I’ve heard buffoonery about Spring Drive being more quartz than mechanical, but we don’t need to entertain that any further. 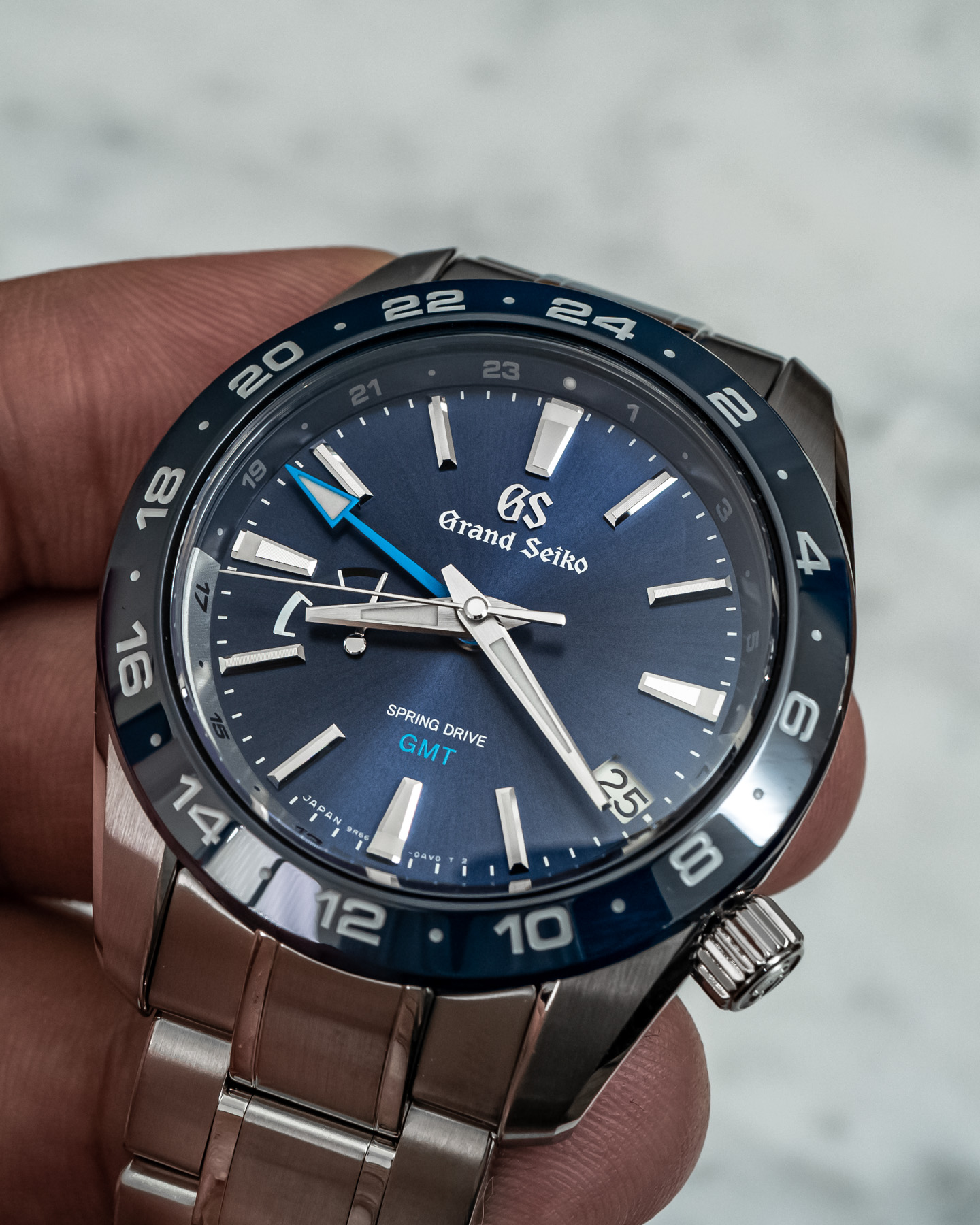 The sweep of the seconds hand on a Spring Drive watch is the smoothest you’ll see, and it’s always mesmerizing, especially when positioned next to a watch that operates at something like 18,000 bph and looks practically sputtering in comparison. The Caliber 9R66 has a 72-hour power reserve and is accurate to +-15 seconds/month compared to the Rolex GMT Master II, which is +-2 seconds/day. Personally, I think everyone should have a Spring Drive watch in their collection and something as versatile as these 40.5mm Spring Drive GMTs could ostensibly be both casual, everyday sports watches and travel watches in one. 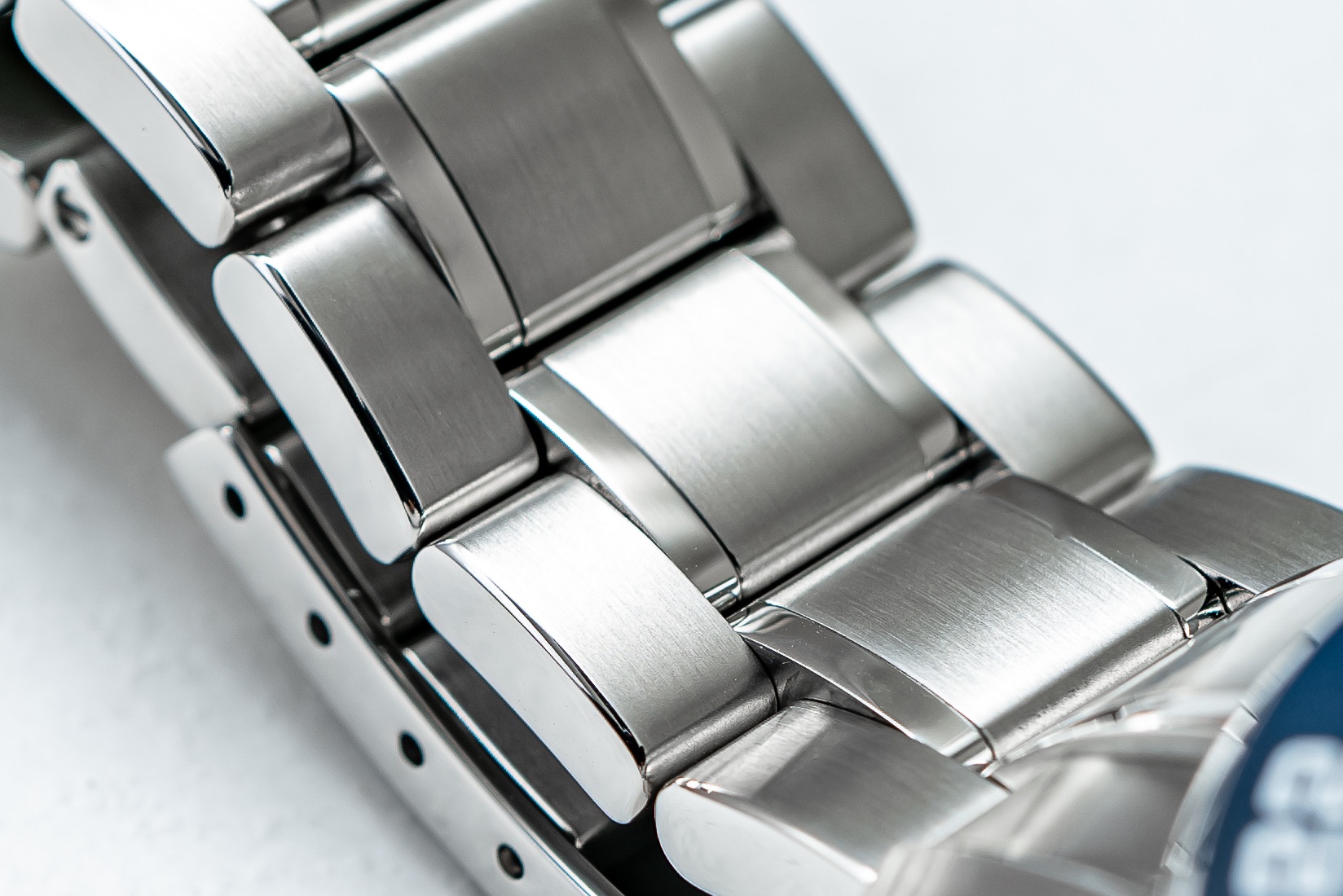 The Panerai Luminor PAM1535 ($8,200) and Omega Seamaster Planet Ocean GMT with black and white bezel ($7,900) are decent choices as well, but both are about $2,000 more than the Grand Seiko. I suppose Bremont has some good options that start around $5,500 but they use ETA movements and are not “true GMTs,” as they don’t have an independent hour hand. 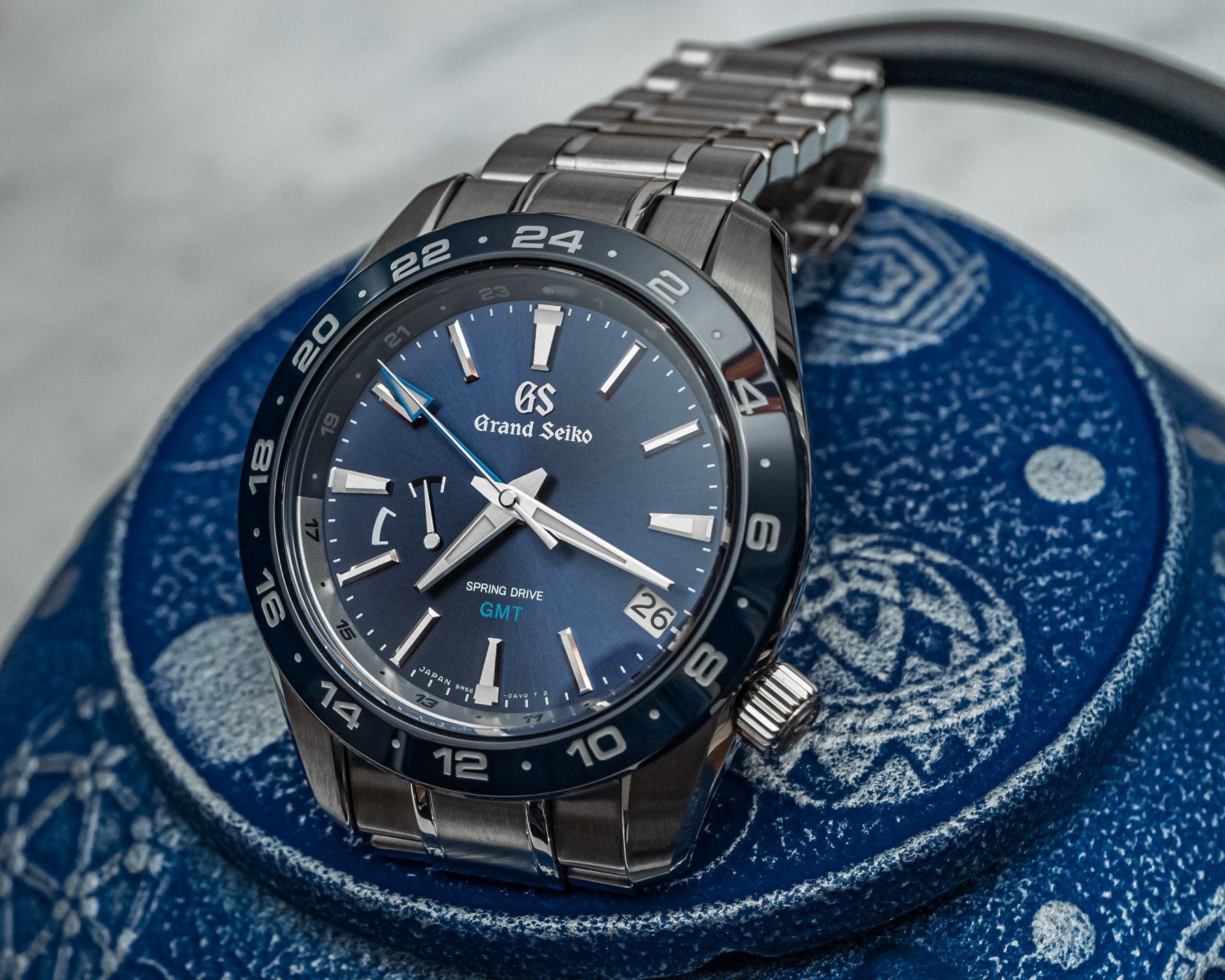 The new Spring Drive GMT in a 40.5mm case excels in finishing quality, has a very nice ceramic bezel, 200M of water resistance, is a true GMT with independent hour hand, and has a brand new bracelet that, while far from perfect, is a serious upgrade and has a micro-adjust clasp. There are downsides of course as it only tracks two time zones due to the fixed bezel, and perhaps the case is still on the thicker side for some people’s tastes (though I’d absolutely recommend trying it on before dismissing).