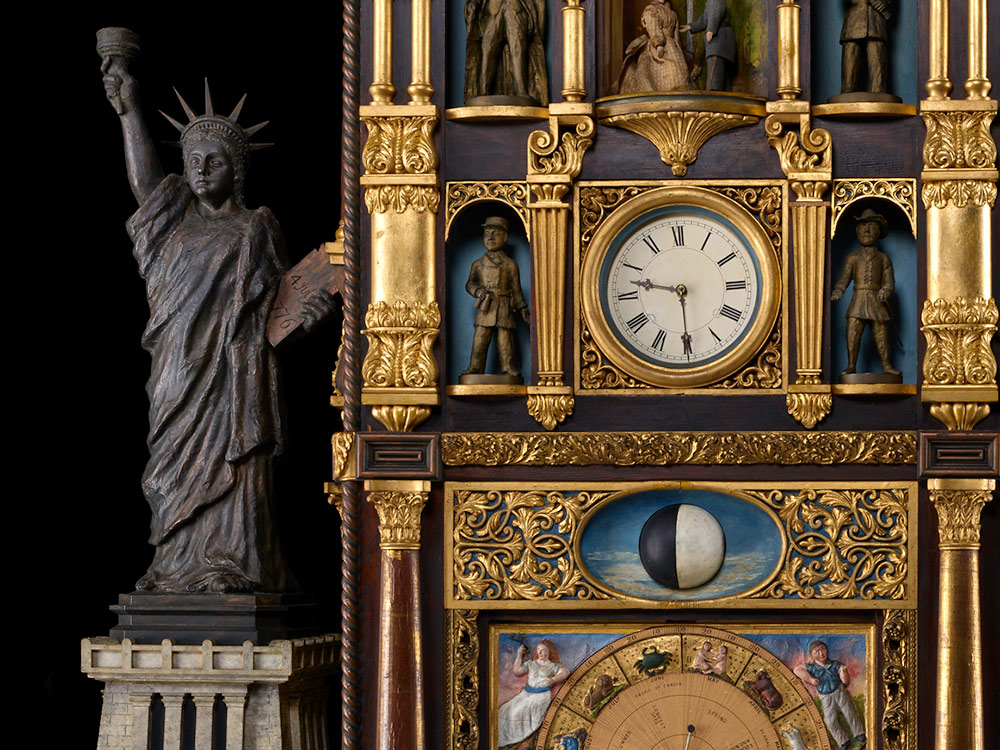 While not exactly the latest technology or high-tech materials used in watches today, much less something to be worn on the wrist, this remarkable old clock gets another moment in the spotlight and deserves a look from anyone interested in history, horology… and patriotic American lore. Known as The Great Historical Clock Of America, this 13-foot-tall (about 4 meters), highly complicated, and highly animated clock will be on display at the Smithsonian’s National Museum of American History in Washington D.C. starting June 28, 2017, after decades in storage. It represents a peek at some little-known history and a snapshot of clockmaking around the late 19th century. 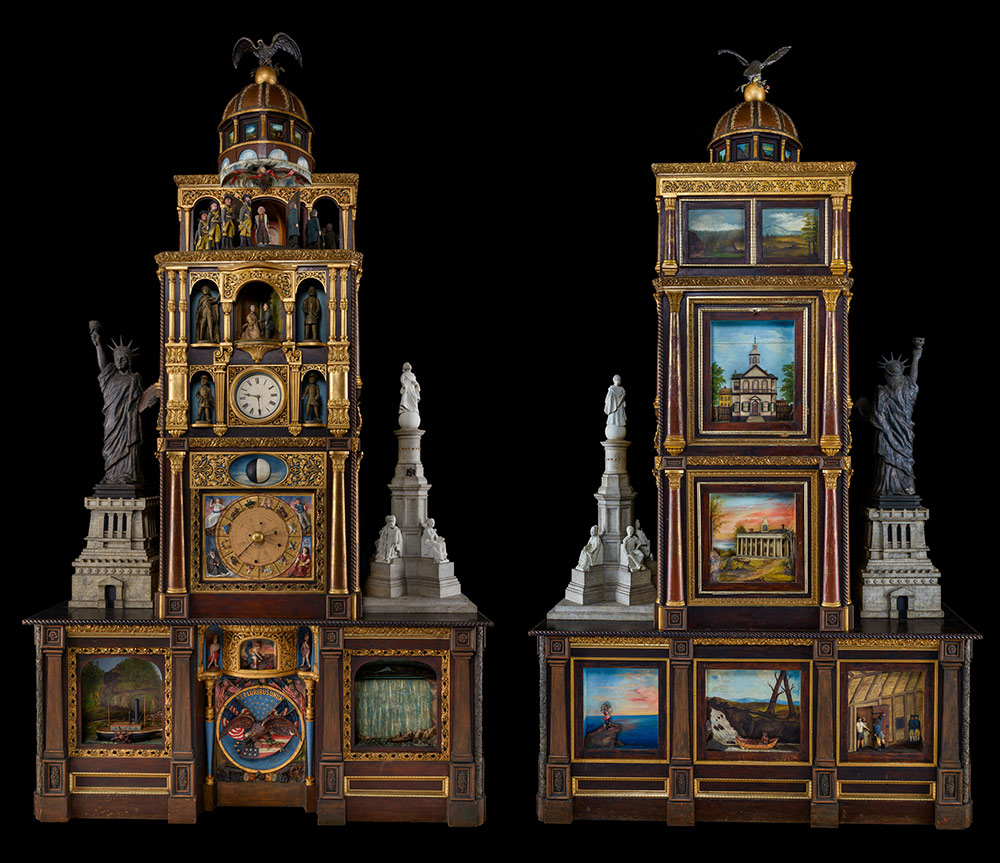 With a multitude of complications, the automata (mechanically animated scenes and figurines) unquestionably steal the show – and, in fact, the scant information available on the clock mostly skips over its timekeeping complications (as well as other technical details we would like to know). Unfortunately, the mechanism will not be “performing” for the public as, according to the project’s lead conservator Beth Richwine quoted by AtlasObscura.com, it is far too delicate, and “It would be a maintenance nightmare to even try to run it.” However, the Smithsonian has created a series of videos showing each of the automata in action, and it’s really worth a look.

From a horological perspective, the time with hours and minutes are in the center, of course, above a moon phase indicator, and finally an astronomical dial below. The long, black hand with an arrow tip indicates the calendar information with the month and zodiac sign, but the hand does not reach all the way to the edge where the date is displayed. Another example of overly short hands?

Moving inward are indications for the seasons, equinoxes and soltices – and an orrery, a mechanical model of the solar system with five planets represented in their orbits around the sun. Also note that the calendar information is displayed counterclockwise, the same direction that the planets are moving – we have seen the same thing in watches with similar complications, for example, in the Van Cleef & Arpels Planetarium watch, the Geo.Graham Orrery Tourbillon, or the Citizen Astrodea watches. 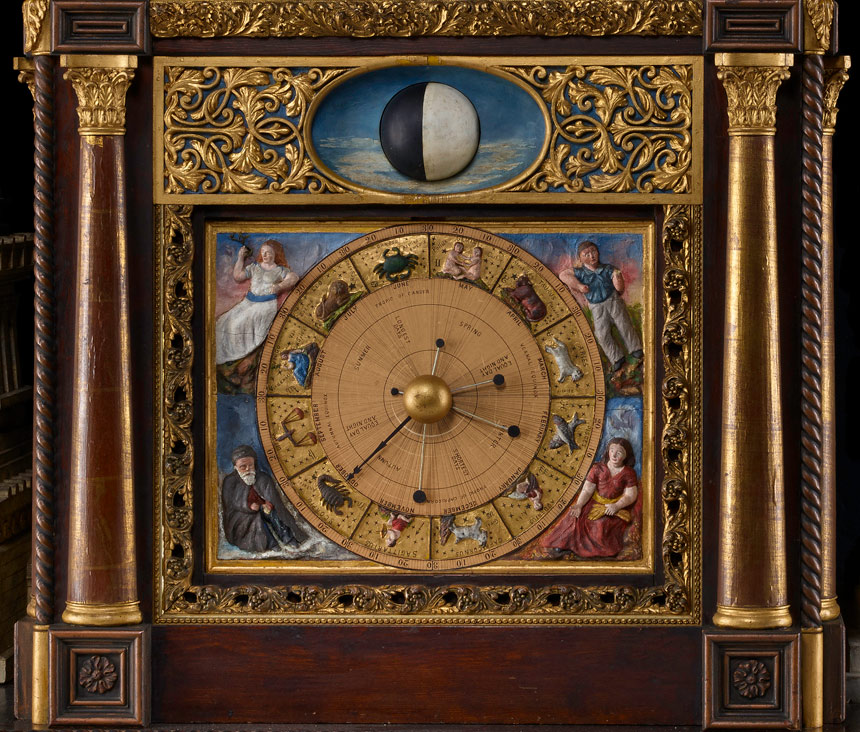 As if supplementary to a fourth-grade American history textbook – and, appropriately, the clock is featured in the “Creating Citizens” section of the Smithsonian’s exhibit – the scenes and symbols that take the form of still images, reliefs, statuettes, and of course, various types of animations, are all from patriotic American lore. The full list of motifs and images would just be too long to enumerate, but you can maybe identify many of them – especially if you’re American (extra credit if you can name the presidents on parade). The video will do a better job showing a lot of the animated features than my trying to explain them. Here is a partial list of the animated scenes: 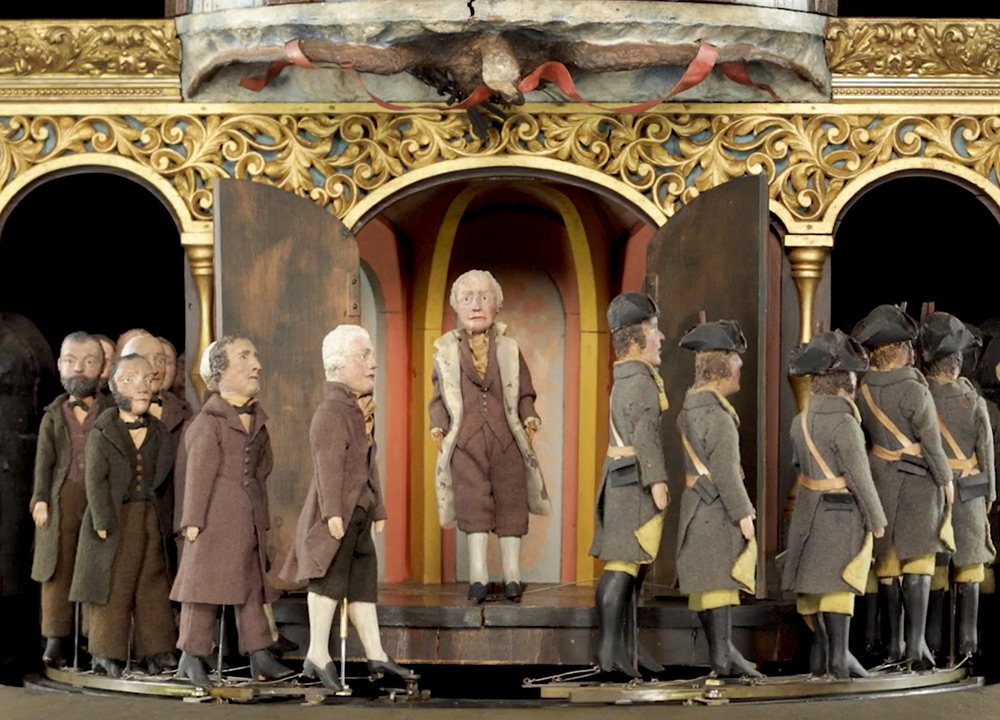 At the top of the whole thing, George Washington reviewing his troops and the “march of presidents” is the centerpiece and most complicated of the automata. The presidents depicted do not represent the full list of presidents at that time, and they are not in chronological order.

In addition to all of these complications and animations is a music box (Shazam failed to help me identify the song being played, but maybe the audience can help), and even a lightbulb for the Statue of Liberty’s torch. The torch won’t be lighting up, though, as the museum is afraid to get electricity anywhere near the wood, fabric, and paper mache used throughout. The clockwork behind it all was made from mass-produced clock parts from the time as well as recycled hand drills. The Smithsonian’s conservators have cleaned the parts, even vacuuming the figurines’ clothing, and replaced chains between the shafts for the exhibit. 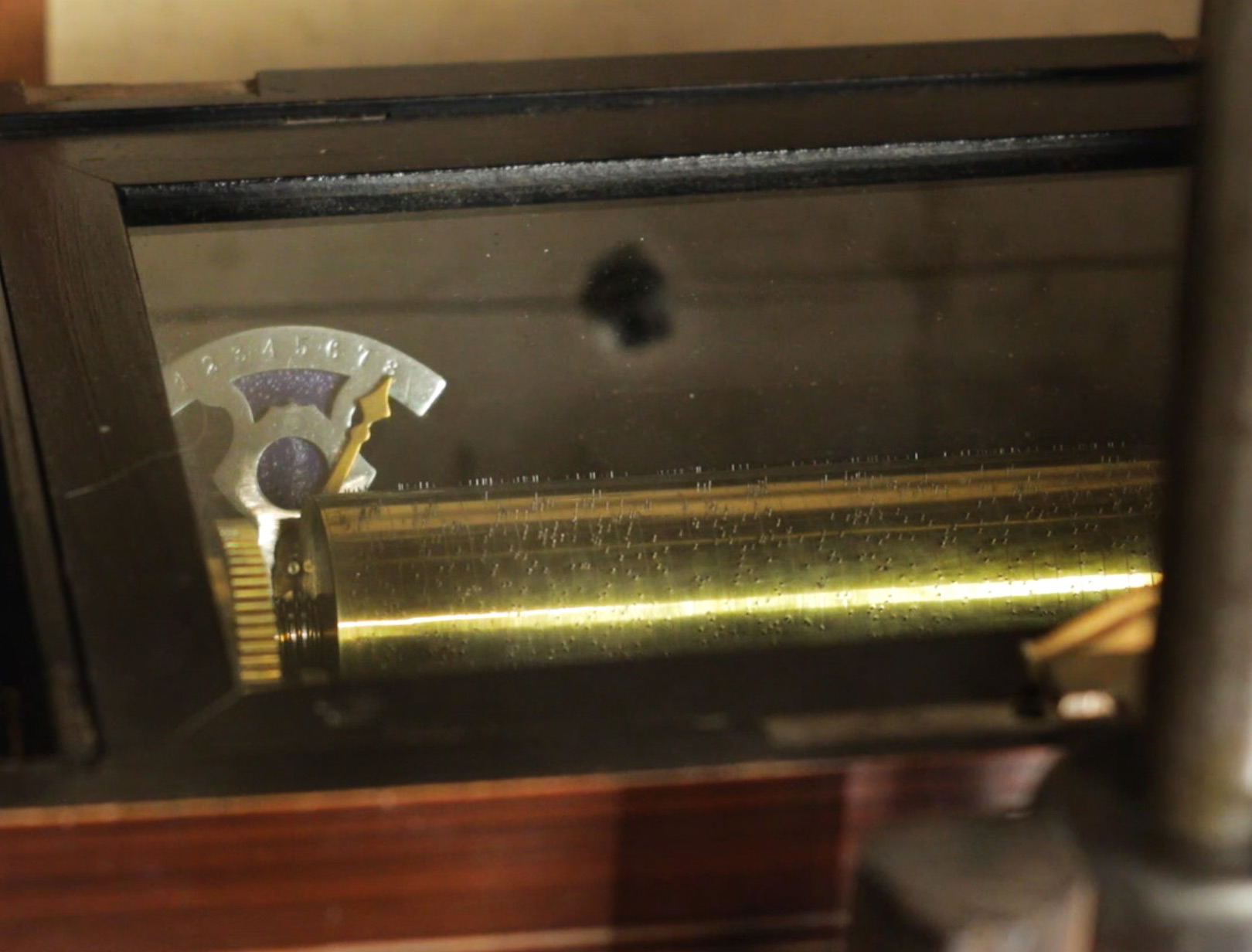 Unfortunately, not much is known about the Great Historical Clock Of America’s creation. It is estimated to have been made around 1890, and its creators were a craftsman from Boston, Massachusetts, named C. S. Chase and his son Albert, according to newspaper reports from the time. An interesting and short-lived phenomenon roughly between 1875 and 1900 saw more than a couple dozen such monumental clocks appear in the United States and Europe. They were also taken on tour alongside the likes of “minstrel singers, sword swallowers, and trained gorillas.” The Great Historical Clock of America was known to have traveled as far as Australia and New Zealand, and one newspaper is quoted as calling it “without doubt, the greatest scientific, mechanical and artistic achievement of the nineteenth century.” It was kept in a barn in New Hampshire for most of the 20th century by a retired lingerie salesman who charged ¢25 to view it until the Smithsonian acquired it in 1979. 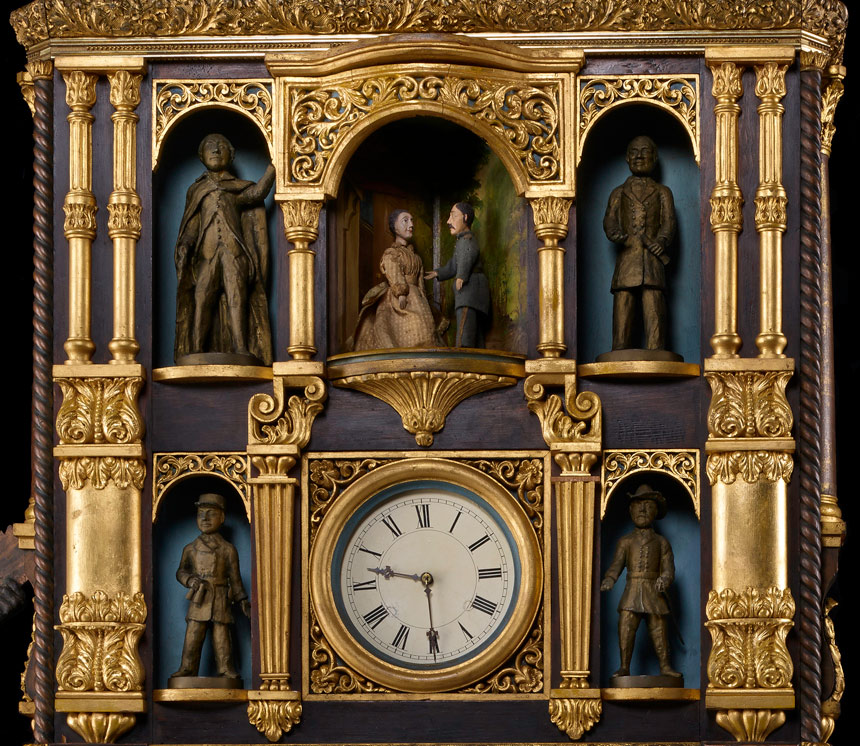 The Smithsonian calls the Great Historical Clock of America “an American version of the astronomical clock of Strasbourg Cathedral,” long one of Europe’s most famous clocks at the time. Actually, it is believed to have been made to “compete” with the Strasbourg clock, attempting to outdo it in spectacle, as America was asserting itself an industrial power. That partly explains the patriotic nature of the clock, and although similar national and religious themes were apparently shared by other such clocks of the time, the Great Historical Clock of America is said to epitomize the trend.

The Great Historical Clock Of America is part of the “American Democracy: A Great Leap of Faith” exhibition which opens June 28, 2017, just in time for the 4th of July, at the Smithsonian Institute’s National Museum of American History in Washington D.C. americanhistory.si.edu