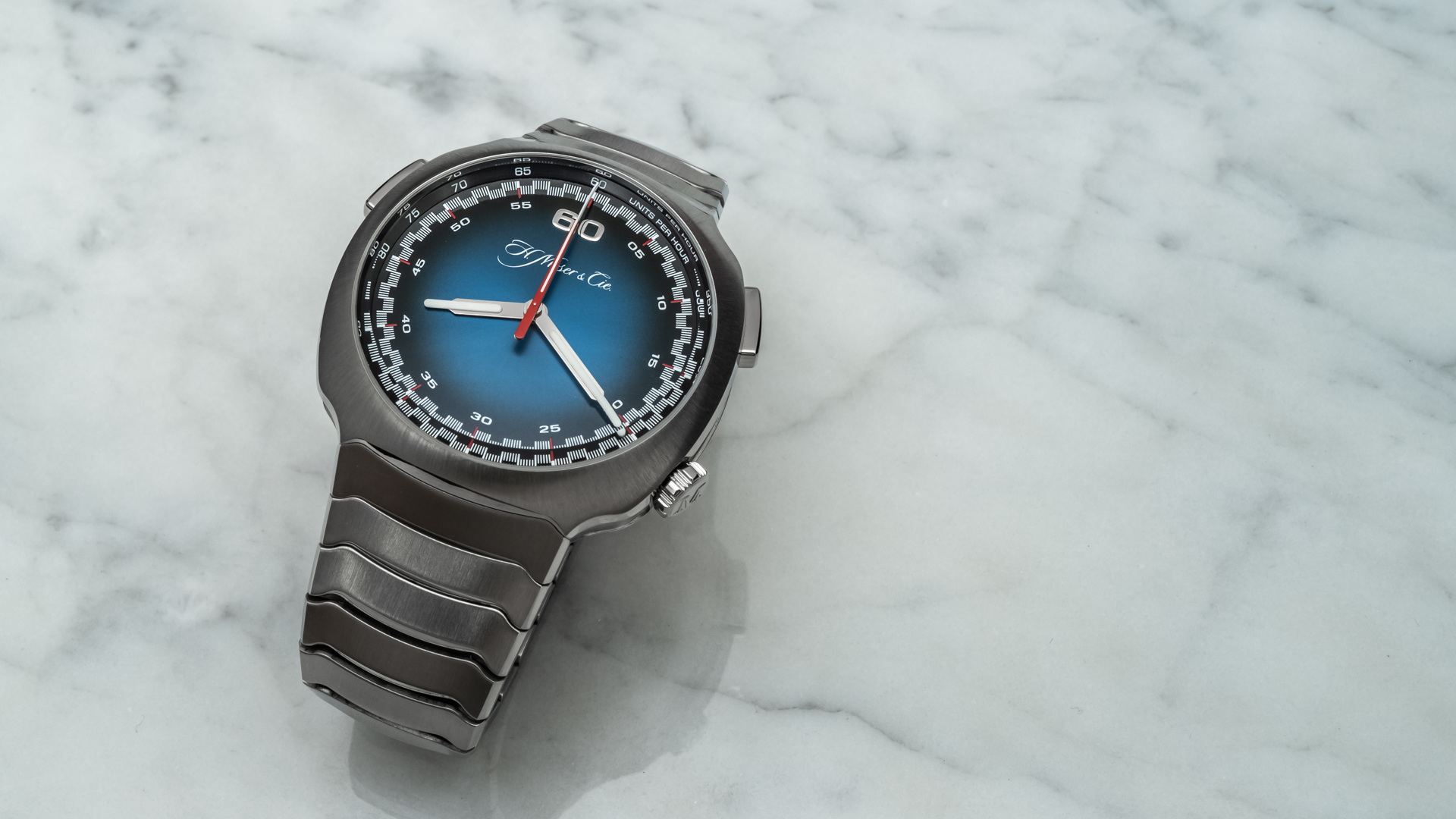 In little under a year since its debut, the H. Moser & Cie Streamliner has made quite a name for itself in the super-competitive luxury sports watch market. Just a couple of days ago, the Streamliner Flyback won the GPHG Chronograph prize and the pared-down time-only Centre Seconds Matrix Green variant (aka the Green Dragon) presents one of the most formidable alternatives to the usual suspects in the steel sports watch game in years. Now, joining the anthracite gray-dial Streamliner Flyback Chronograph is this “funky blue” fumé dial version that, unlike the inaugural model, isn’t a limited edition (though, this being Moser, there are not going to be that many produced). 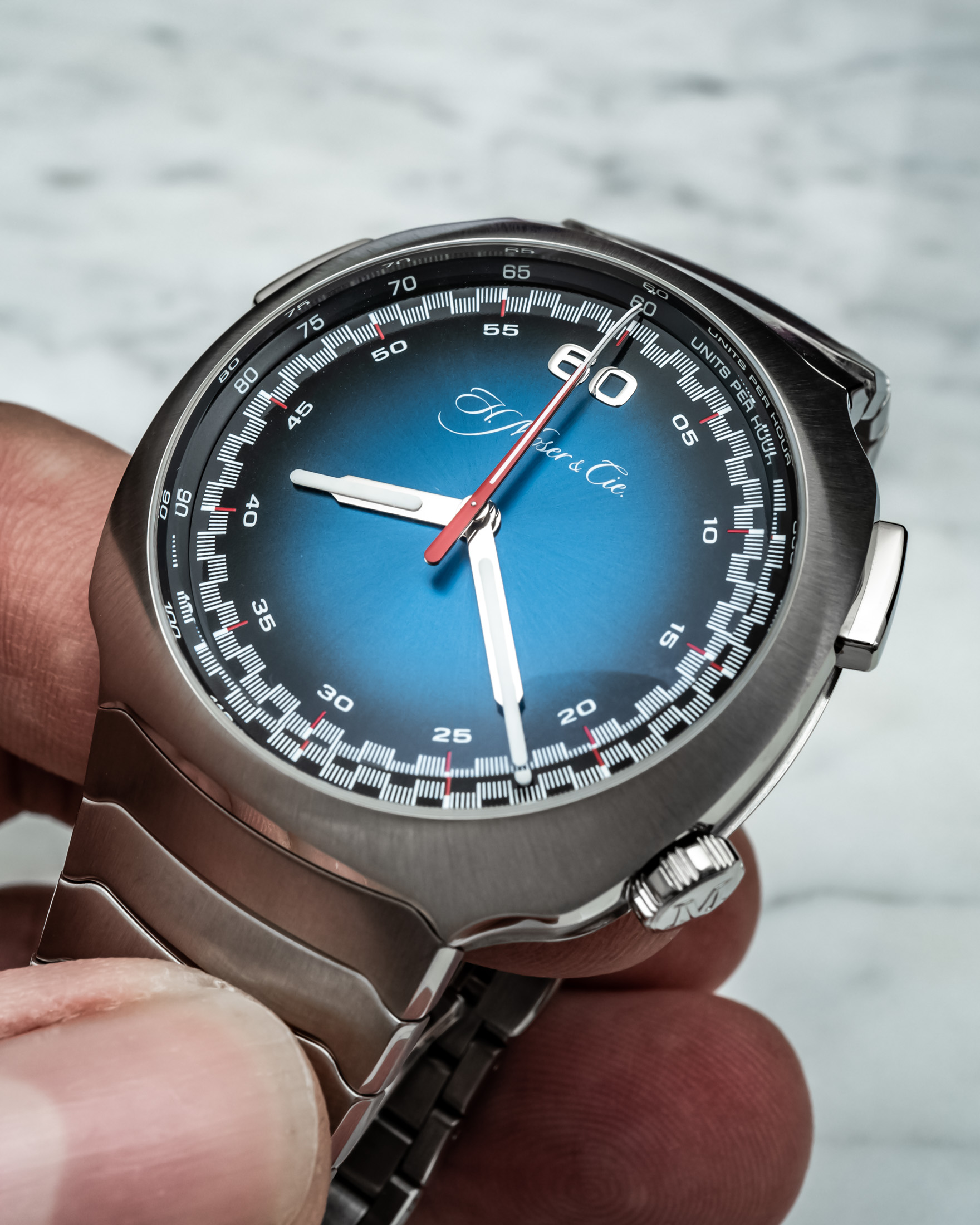 Our David Bredan and I have both dedicated several thousands of words to the Streamliner, at this point, and while I’m admittedly usually more charitable in my takes, David is… not. But it goes to show just how much love and attention to detail the people at Moser pay when my fastidious colleague wrote the following about the dial text on the Centre Seconds Matrix Green: “A crisp white H. Moser & Cie actively adorns the dial. The script is just beautiful — you tell me when was the last time you saw a printed brand name worthy of complimenting, but this one certainly is.” From concept, to design, to execution, the H. Moser & Cie Streamliner has what it takes to really set itself apart during what felt like a deluge of steel luxury sports watches with an integrated bracelet. 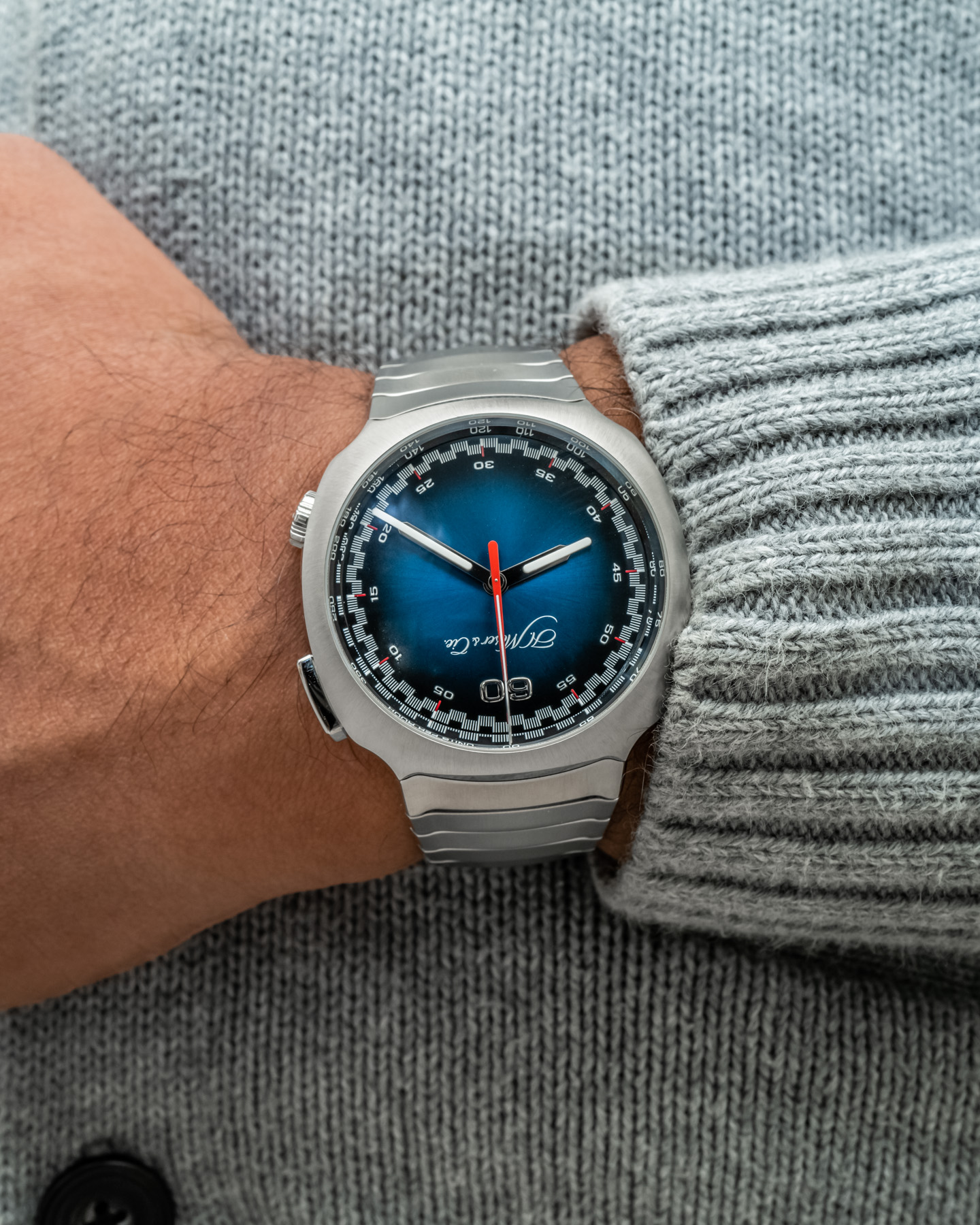 Now to get more into the watch at hand — everything about this new Streamliner Flyback is unchanged other than the dial color. Moser CEO Edouard Meylan said the entire concept of the watch began with the bracelet, which I first described as “architectural fish scales” with those articulated links. 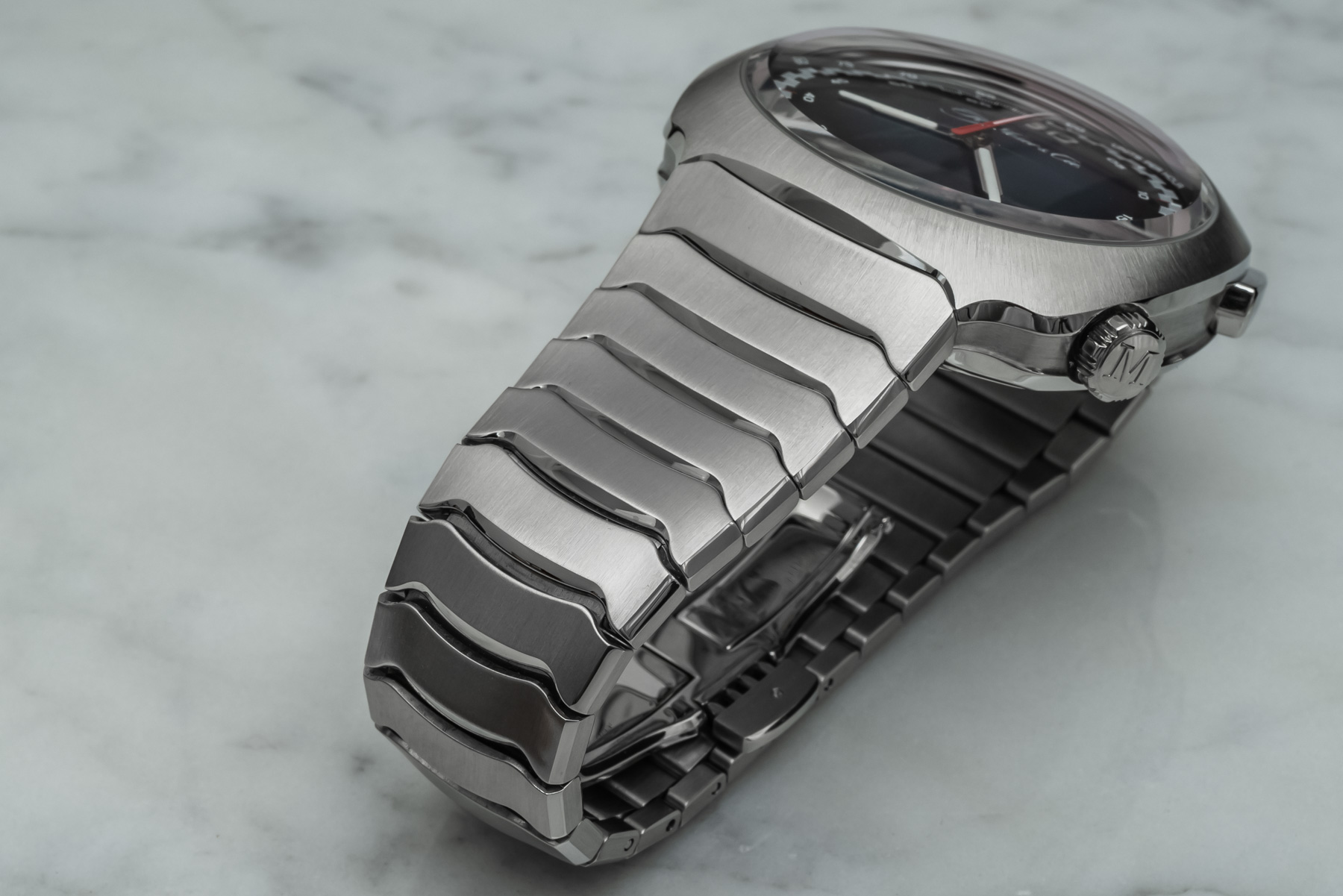 Comfort, design originality, and build quality. Hitting all three of these in a new bracelet isn’t easy, which explains why it doesn’t happen that often. The Streamliner bracelet achieves all these seamlessly, and I would recommend that anyone who has a chance to try one on in the metal should absolutely take that opportunity because words and photos can only go so far. 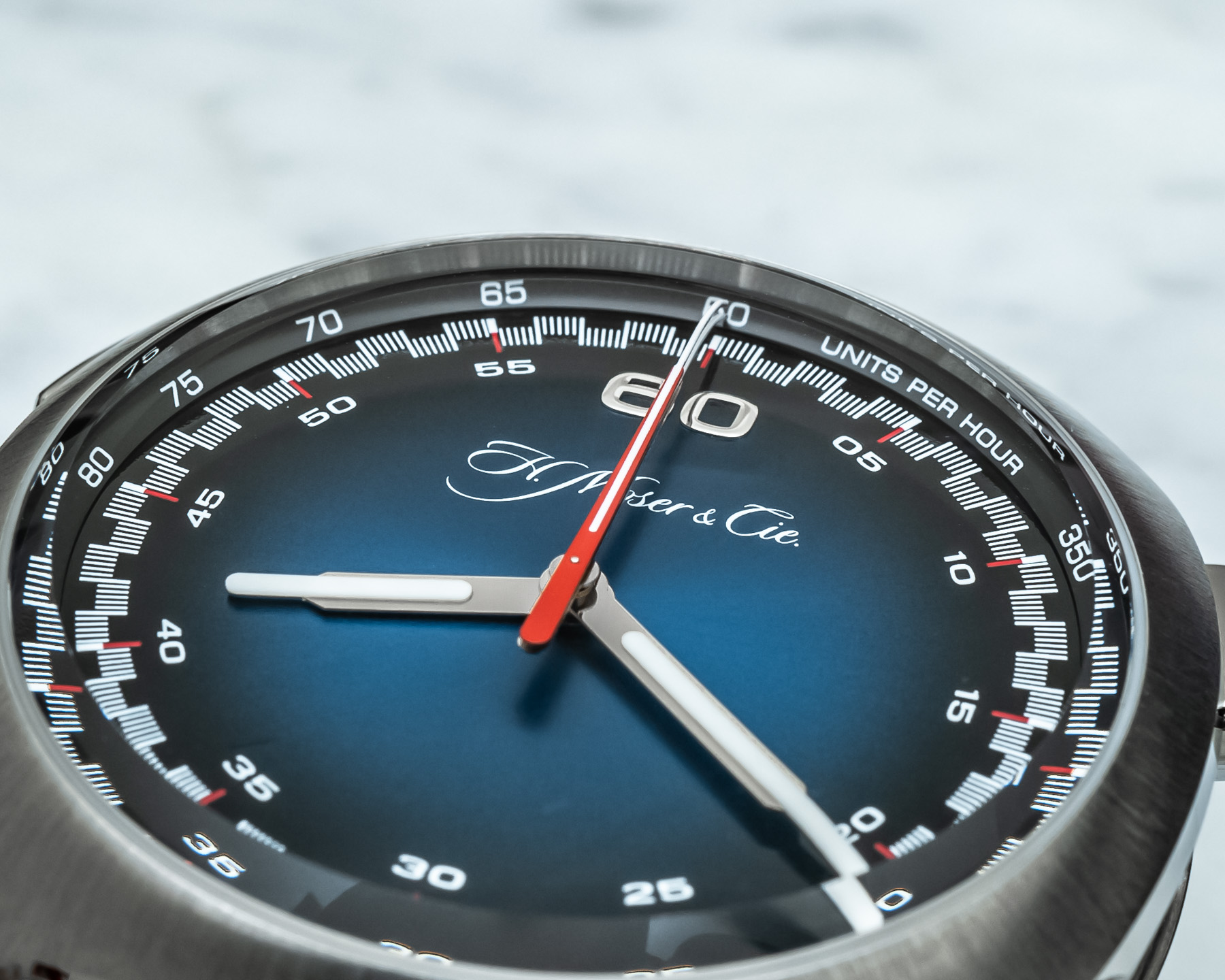 Moser’s “funky blue” fumé dial was most recently seen on its collaboration with MB&F in the Endeavour Cylindrical Tourbillon, and it’s been used in some of the brand’s most memorable pieces, including one of the Swiss Alp watches. When last year’s Streamliner Flyback debuted, it was a new watch with a new bracelet and new movement, so of course, it deserved a new dial color as well. While the anthracite gray fumé wasn’t the most colorful or exciting dial from Moser, I do believe that a subdued color was called for so as not to draw attention away from the aforementioned new case, bracelet, and movement. Now that it’s established, Moser is following up Matrix Green with the stunning “funky blue.” 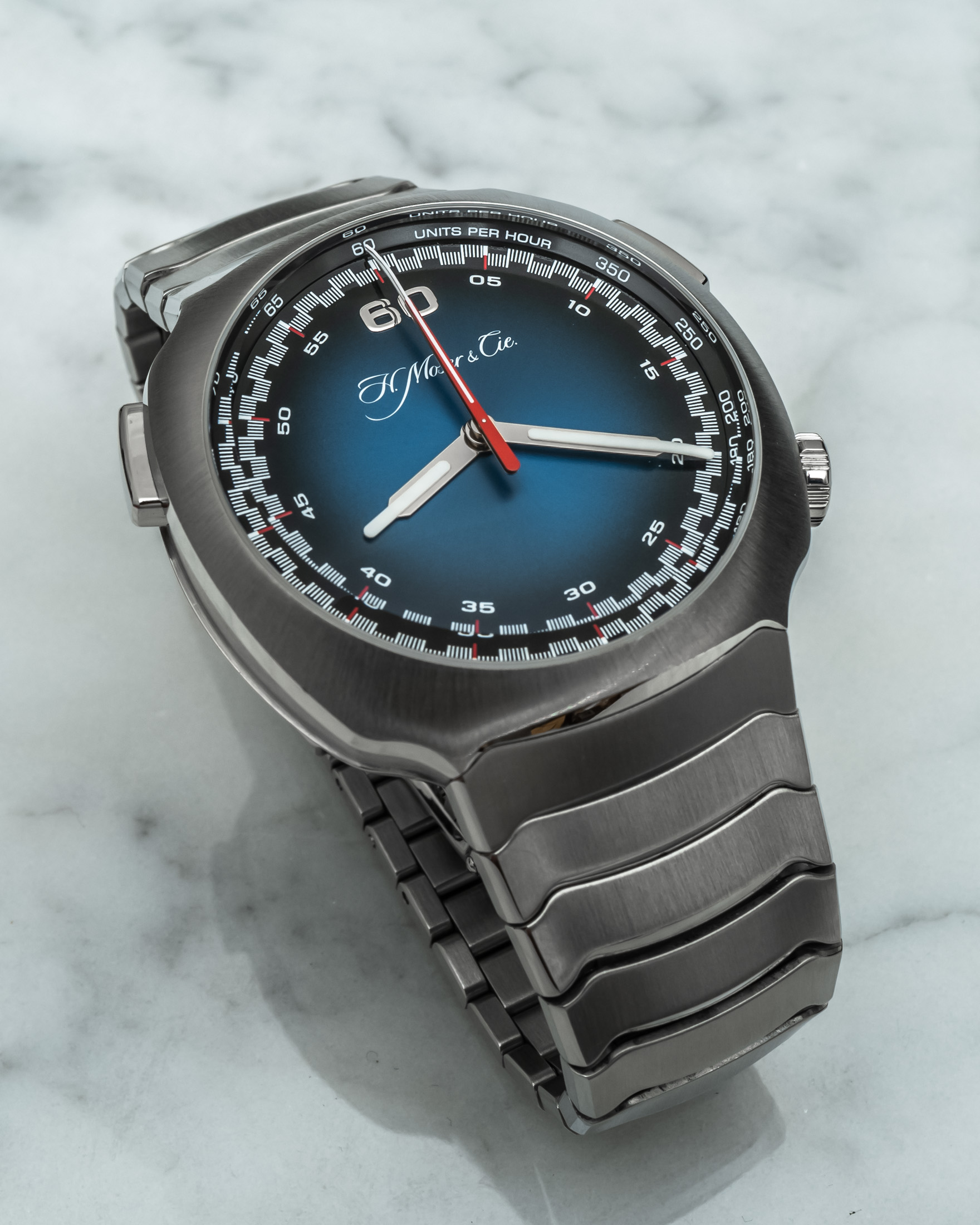 The fumé works perfectly, with the darker outer edges framing the 1960s-inspired tachymeter and minute track while getting lighter and bluer the closer it gets to the center. The red pop of the chronograph hand against the blue makes for a sporty and very casual aesthetic, all of which feeds into its personality. The entire handset is unchanged, I believe. The hour and minute hands still have that distinct two-section construction, with the rounded Globolight (a ceramic-based lume used here for the first time) lume inserts. The two central chronograph hands are done in red and rhodium, respectively, so there’s no mistaking the two. Note how the tips of the chronograph hands gently taper and curve down at the ends.

Also, the anthracite gray dial was fumé and griffé, the latter of which refers to the vertical brushing on its dial. The new funky blue opts for a subtler sunray pattern. 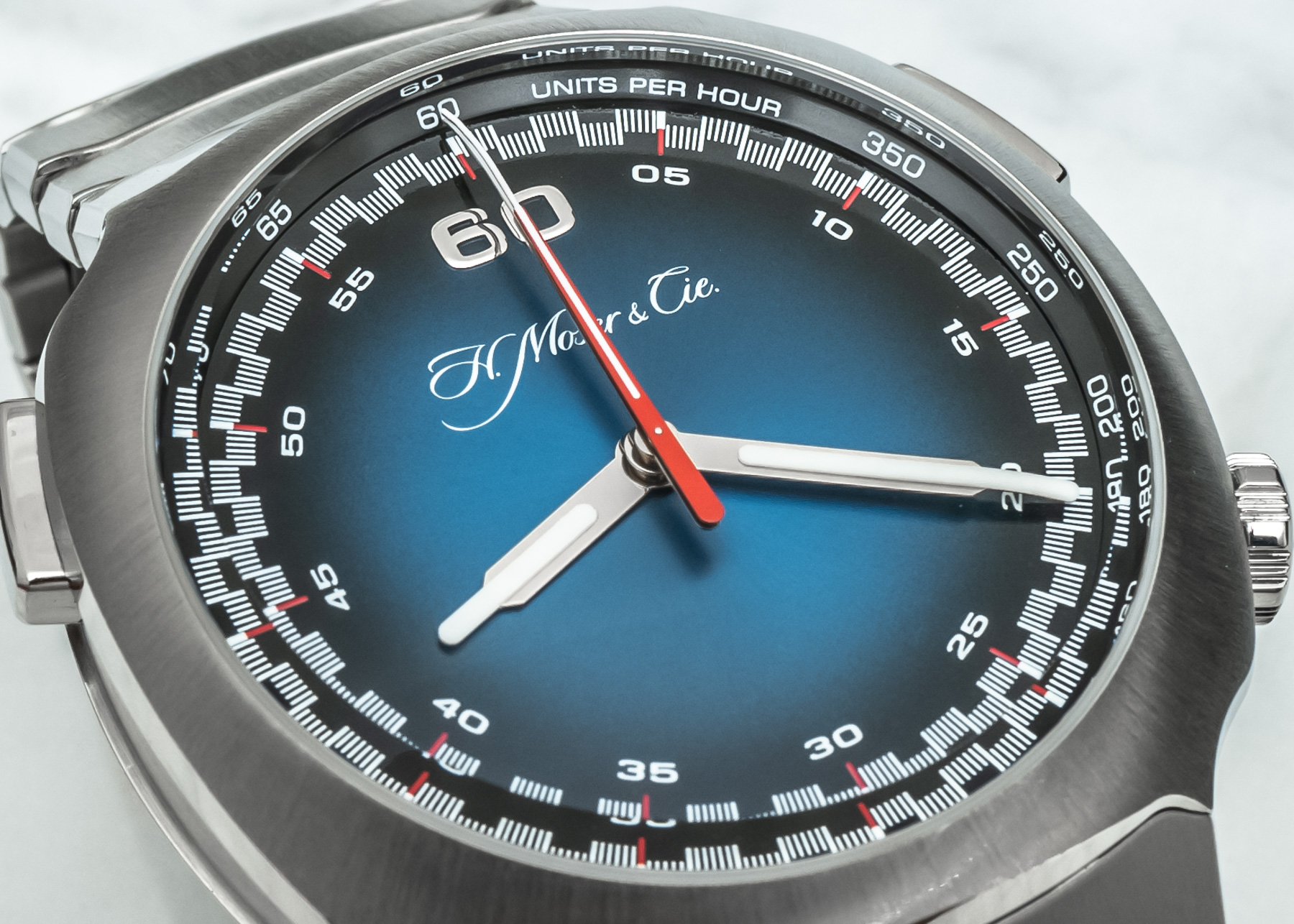 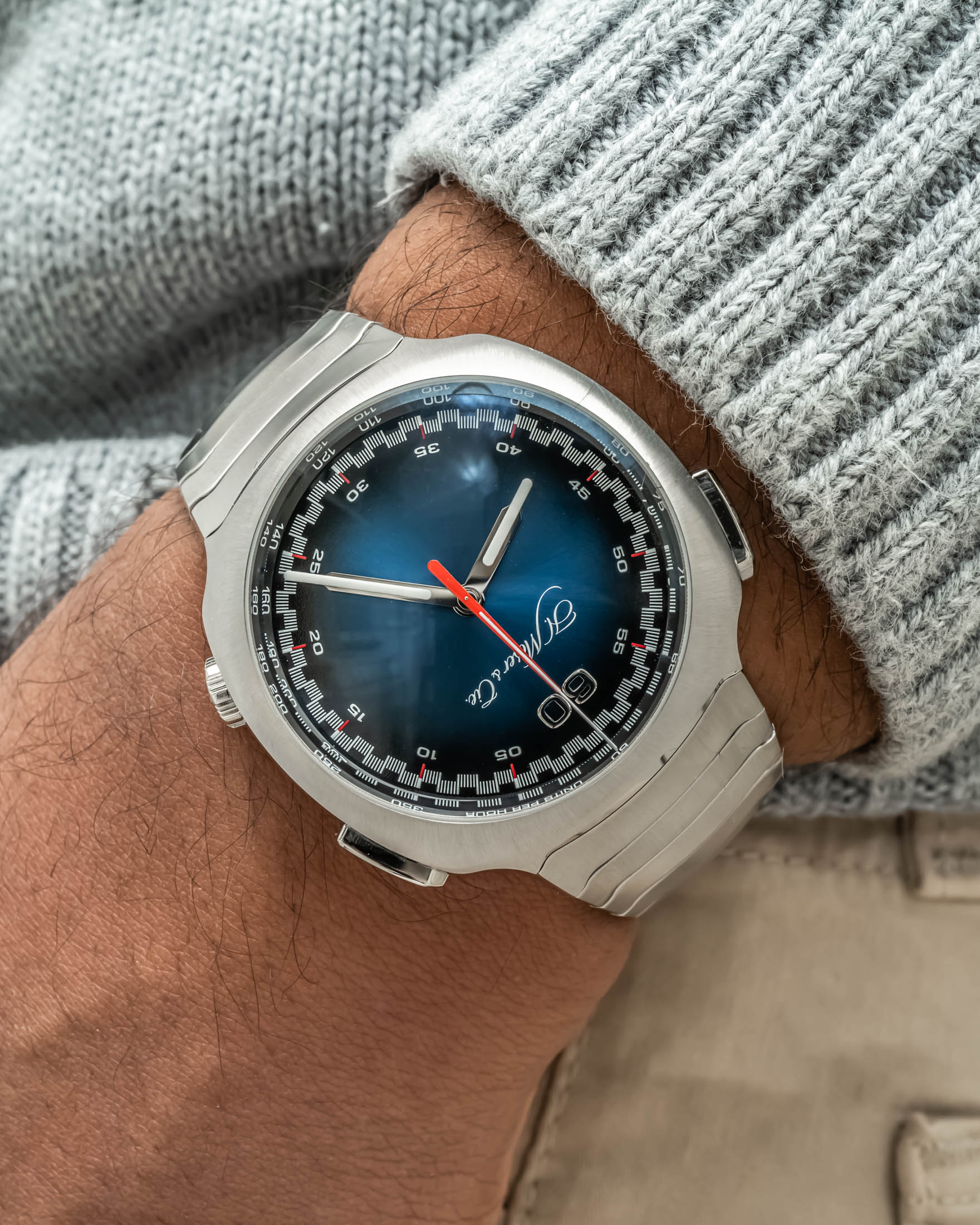 The case measures 42.3mm-wide and 14.2mm-thick with the sapphire crystal (12.1mm-thick without), which isn’t all that thick when you consider this movement. The watch wears smaller than its measurements due to the absence of any real lugs, and the case and bracelet blend into each other seamlessly. The cushion-shaped case is all about that 1960’s style, but it doesn’t get corny or overtly derivative. There’s alternating brushing and polishing throughout, and there’s just a ton of character here from any angle. One thing that I want to give the Streamliner Flyback its due for is water resistance to 120M, which truly makes this a sports watch you can wear while doing just about anything. In fact, Moser specifically states that the chronograph and flyback functions are totally safe if activated underwater. 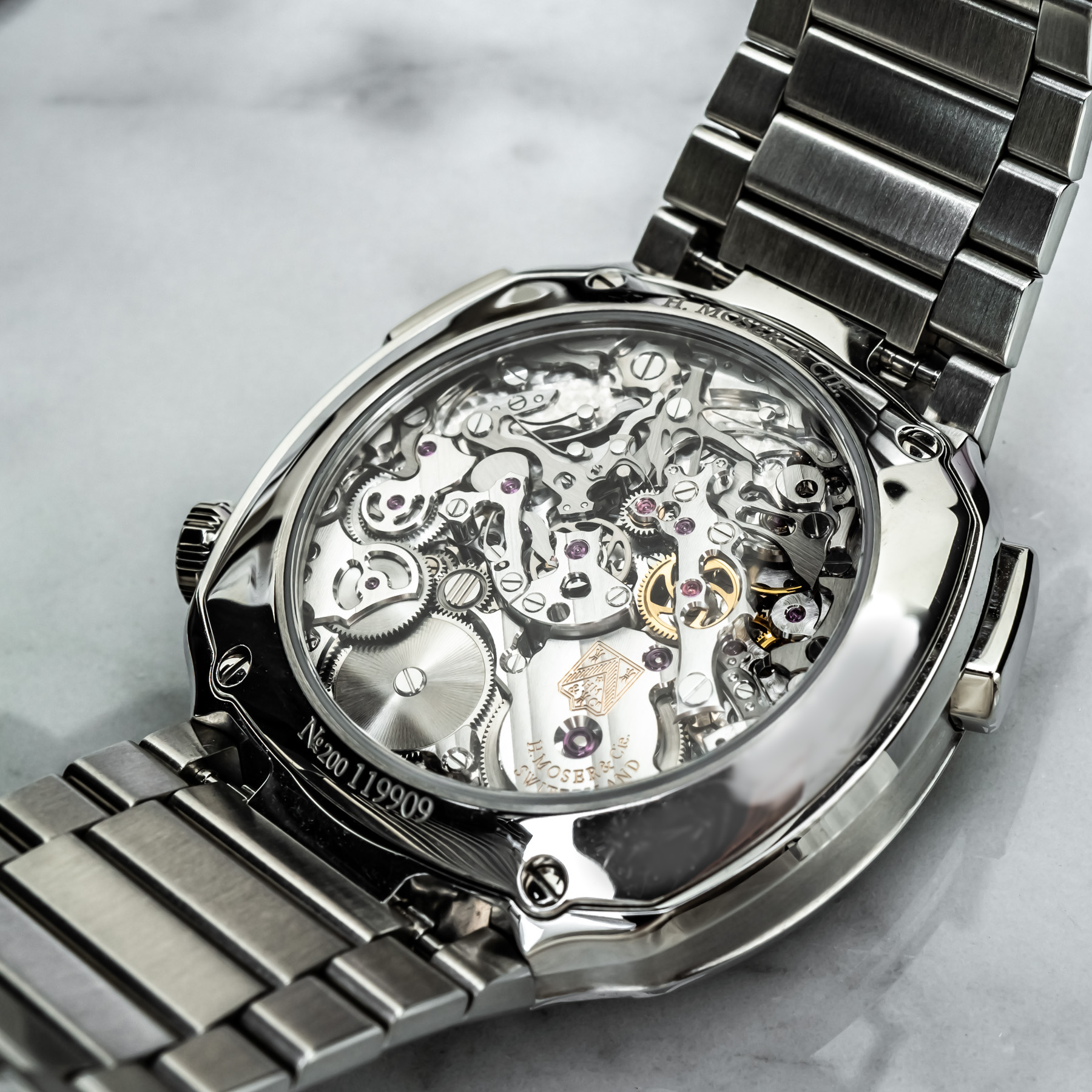 While the bracelet and aesthetics are the immediate attention grabbers, turning the Streamliner Flyback Chronograph over reveals an equally impressive movement. Developed by Agenhor exclusively for the Streamliner Flyback Chronograph, the HMC 902 automatic column-wheel flyback chronograph is an absolute beauty of a movement that is comprised of 434 components, 55 jewels, and Agenhor’s lateral friction clutch and “tulip yoke.” The HMC 902 operates at 21,600 vph and has a 54-hour power reserve.

A final fun fact about the movement is that a close look at the cam right dead center of the caseback is designed to resemble batman. Of course, this is done for the best reason I can imagine: just because. Love it. 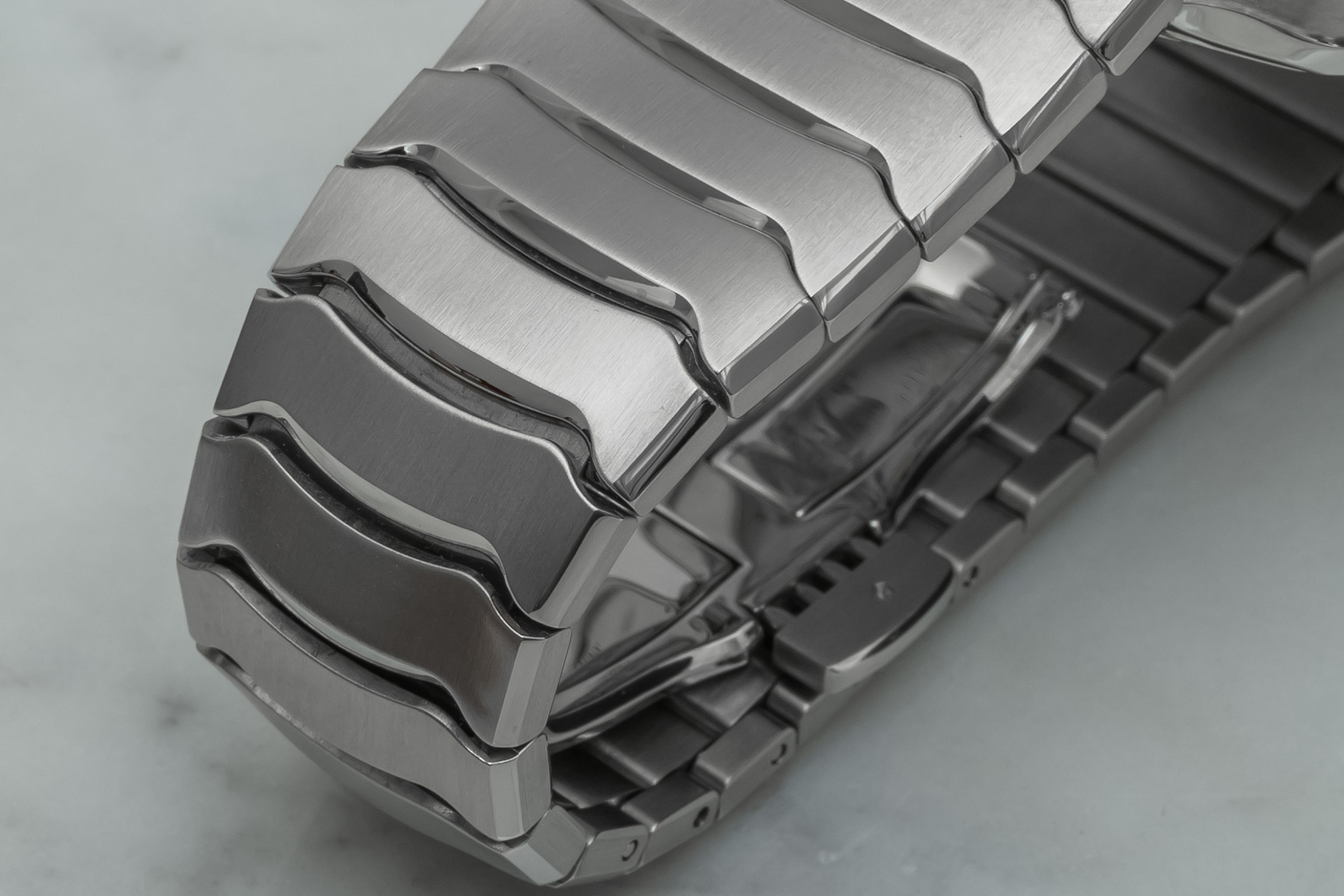 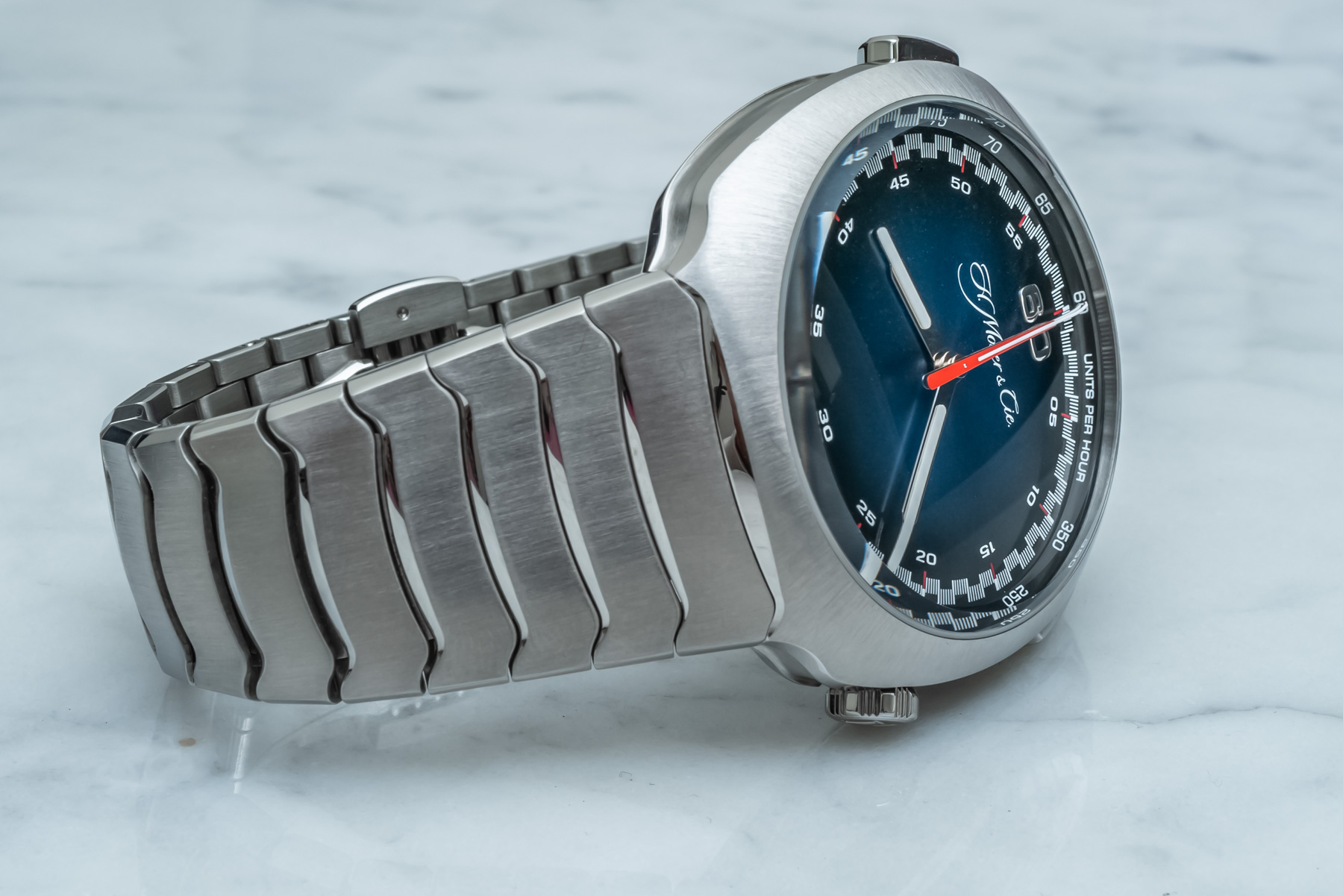 The H. Moser & Cie Streamliner Flyback Chronograph in funky blue dial is a natural next step for the collection, and it continues to present a compelling alternative to the mainstream luxury steel sports watch options. Unlike the anthracite gray, this model is not a limited edition and it is priced at $43,900. You can learn more at h-moser.com.