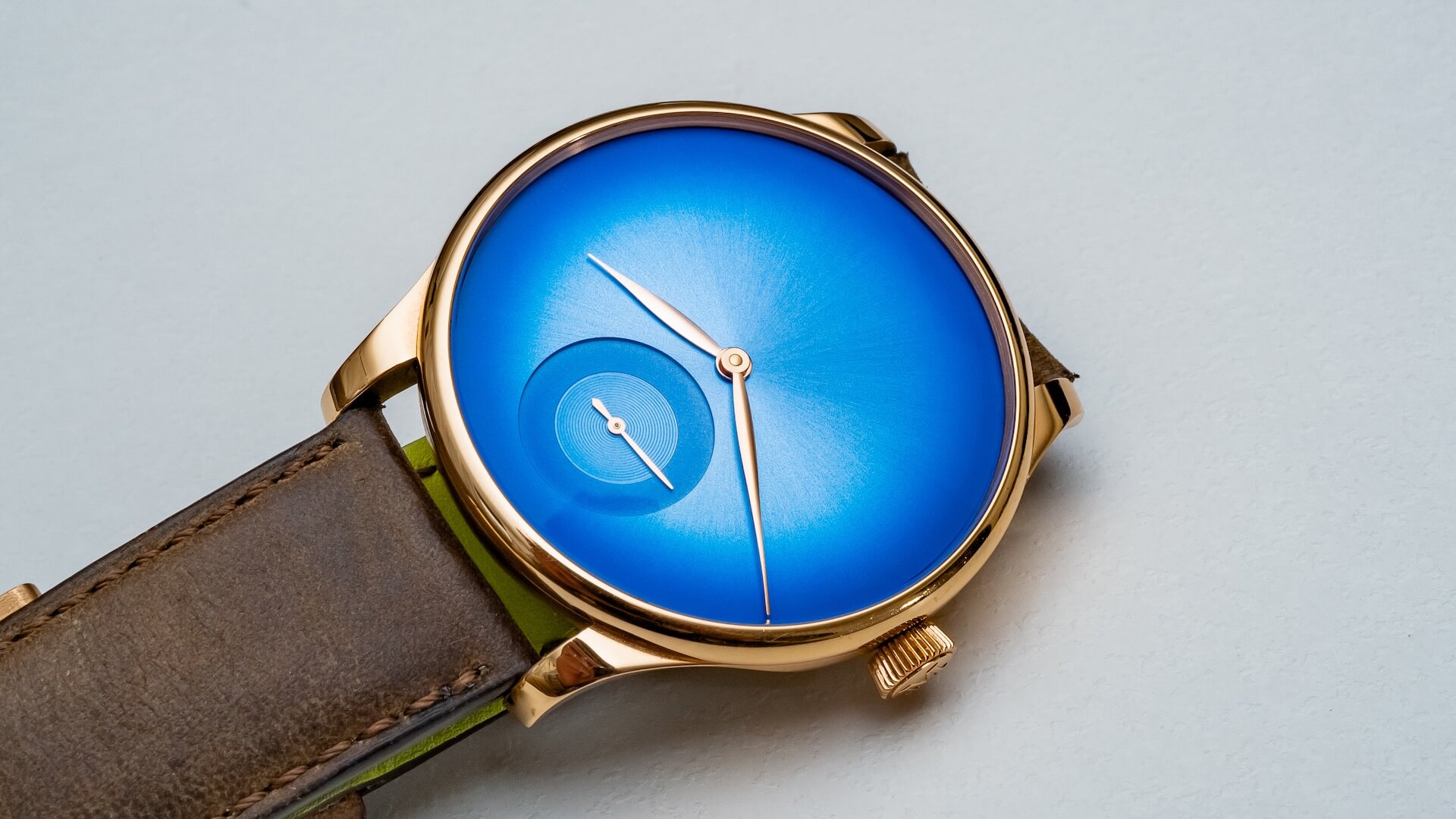 The word “minimalist” in the context of discussing watches has sadly reached the point of near irrelevance — relegated to a catchall term referring to the congeries of soulless copycats and lazily empty blank canvasses that unfortunately get coupled together with actual minimalist-design timepieces into one giant, uninspired mass of mediocrity. In reality, when many of us dismiss something as “too minimalist, not for me” (especially when it comes with a hefty price tag), we actually mean it’s too bland, austere, plain, derivative, uninspired, or just plain boring. But still, “minimalist” hasn’t been totally reduced to just a threadbare platitude yet — it does get justice every now and then.

H. Moser & Cie, specifically its “Concept” line, does minimalism right. Need I remind you of the Endeavour Perpetual Moon Concept in Vantablack? However, for something with color in mind, I recently spent some time with the Moser Venturer Concept Small Seconds XL in the “Arctic Blue” dial, and it has one of the most beautiful executions of blue I’ve ever seen on a watch dial. The minimal unmarked dial, while devoid of indices, text, or brand logo, is joyously expressive through the radiating “Arctic blue” fumé dial. At first, it was challenging to put my finger on why Arctic Blue speaks to me, but there is something special about glancing at it from the side of my eye and feeling like there’s a cutout of the sky on my wrist, albeit an illusory sky from a world more luminescent than ours. 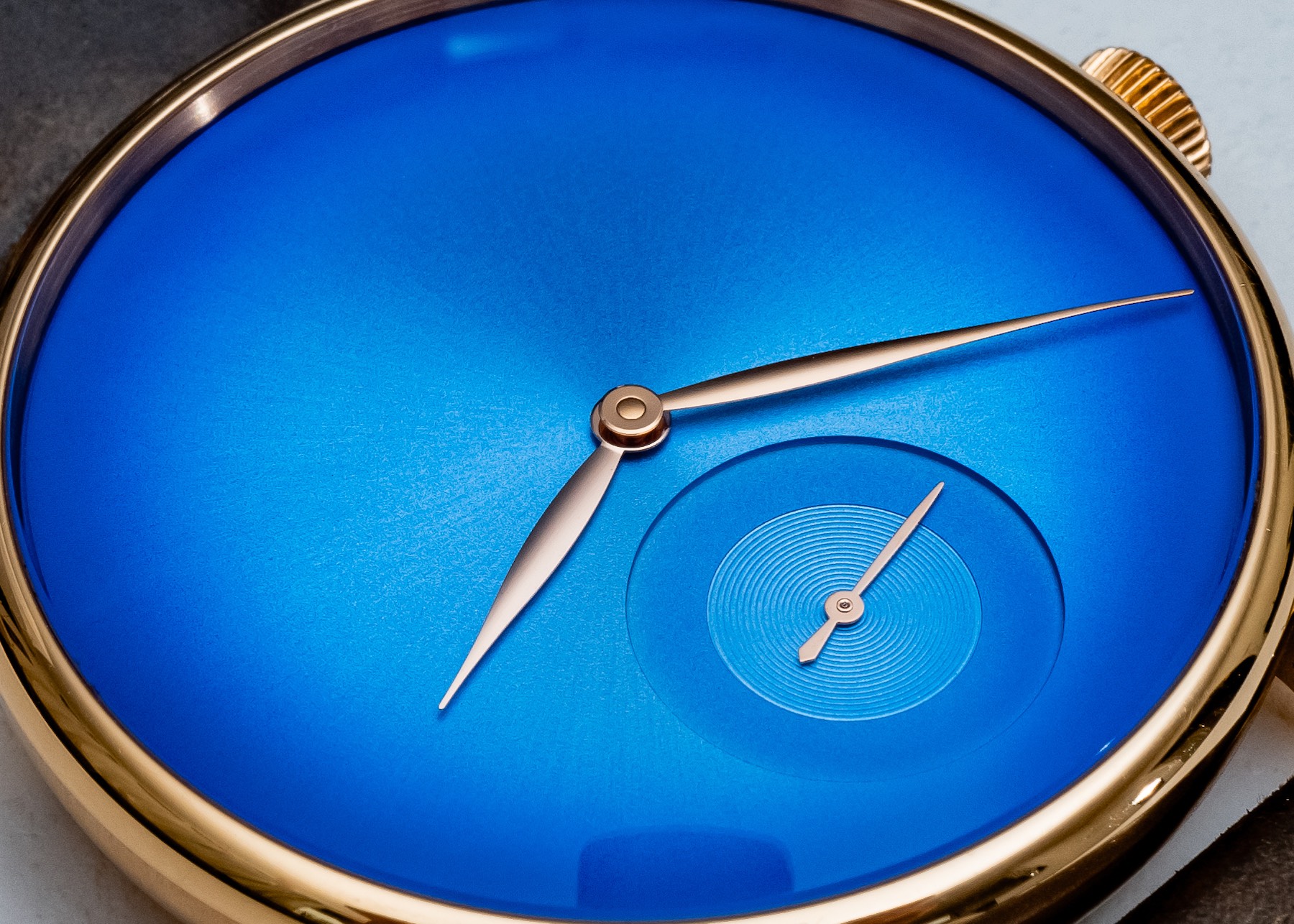 I tried to capture how the dial looks in the metal in these photos, and I believe I largely succeeded. I gazed at the Arctic Blue dial several times over the course of a couple of weeks and I felt something very specific each time I looked at it. The color triggers an immediately nostalgic and warm feeling, like a blue I’d see right before needing to rub my eyes after staring at the sky too long on a sunny day as a child. It’s immediately warm and cool, at once. 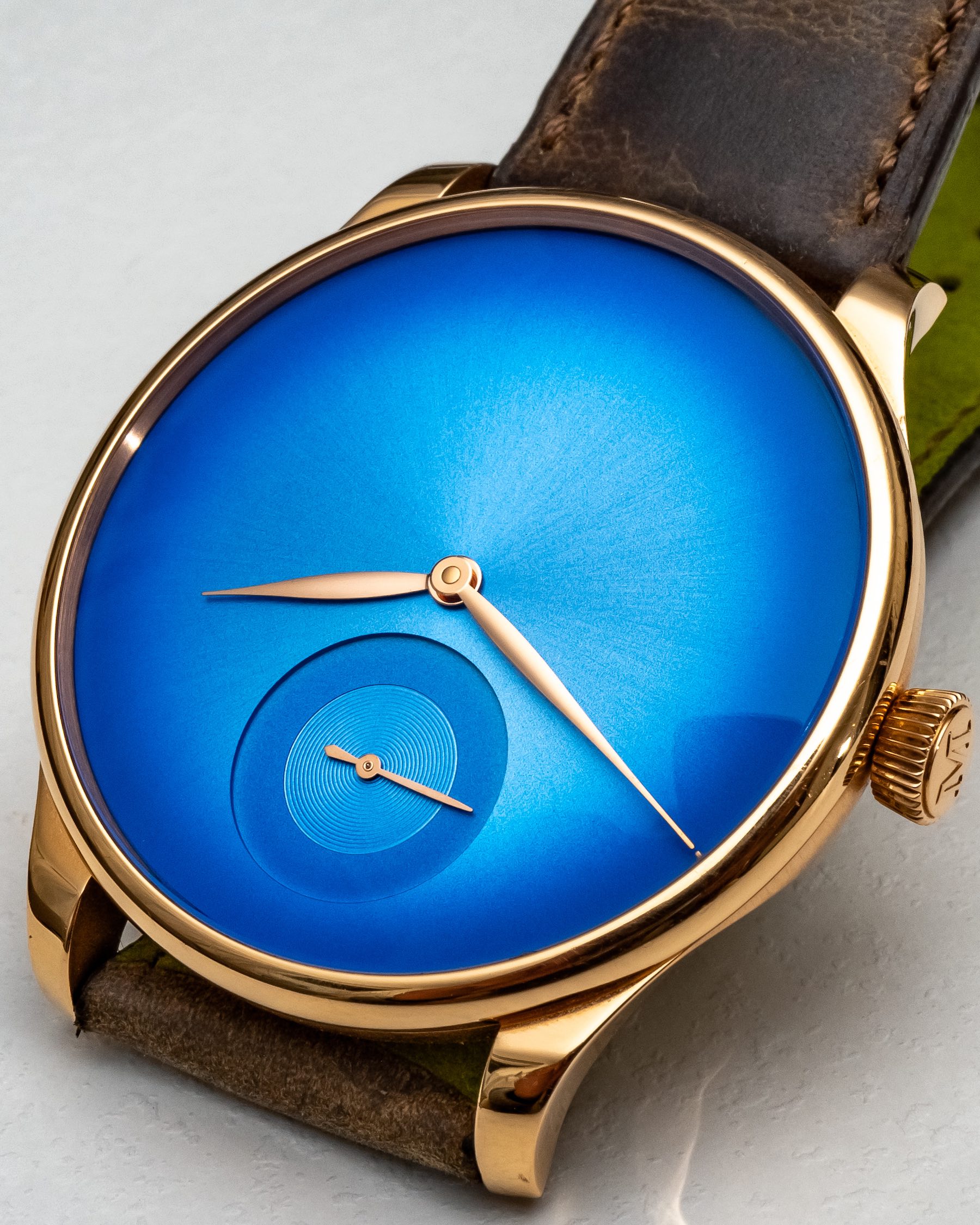 Funny, Arctic Blue is the outcome of a serendipitous error by Moser while producing its darker “Funky Blue” dial (as seen on the Swiss Alp I covered last year). I asked Moser CEO Edouard Meylan about it and he said:

The Arctic Blue was, indeed, the result of an error when trying to produce a batch of funky blue dials. Many parameters are important to create those dials and small differences in timing, temperature, and color mix can have a big impact on the final result. The team told us that the dials were not good and wanted to throw them away, I asked to see them. When I saw it I thought we could try something with it.  We launched a special edition that became a huge success…” 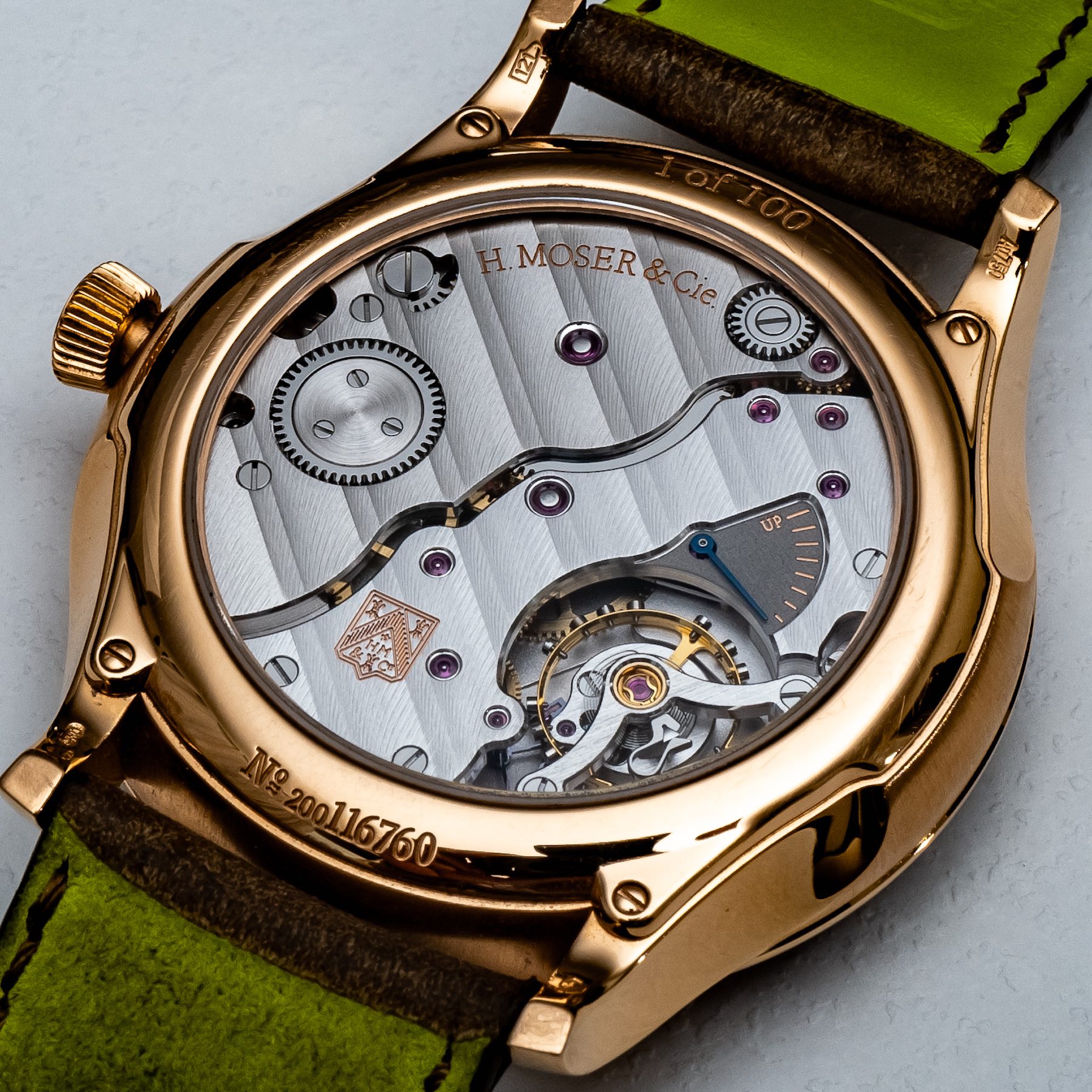 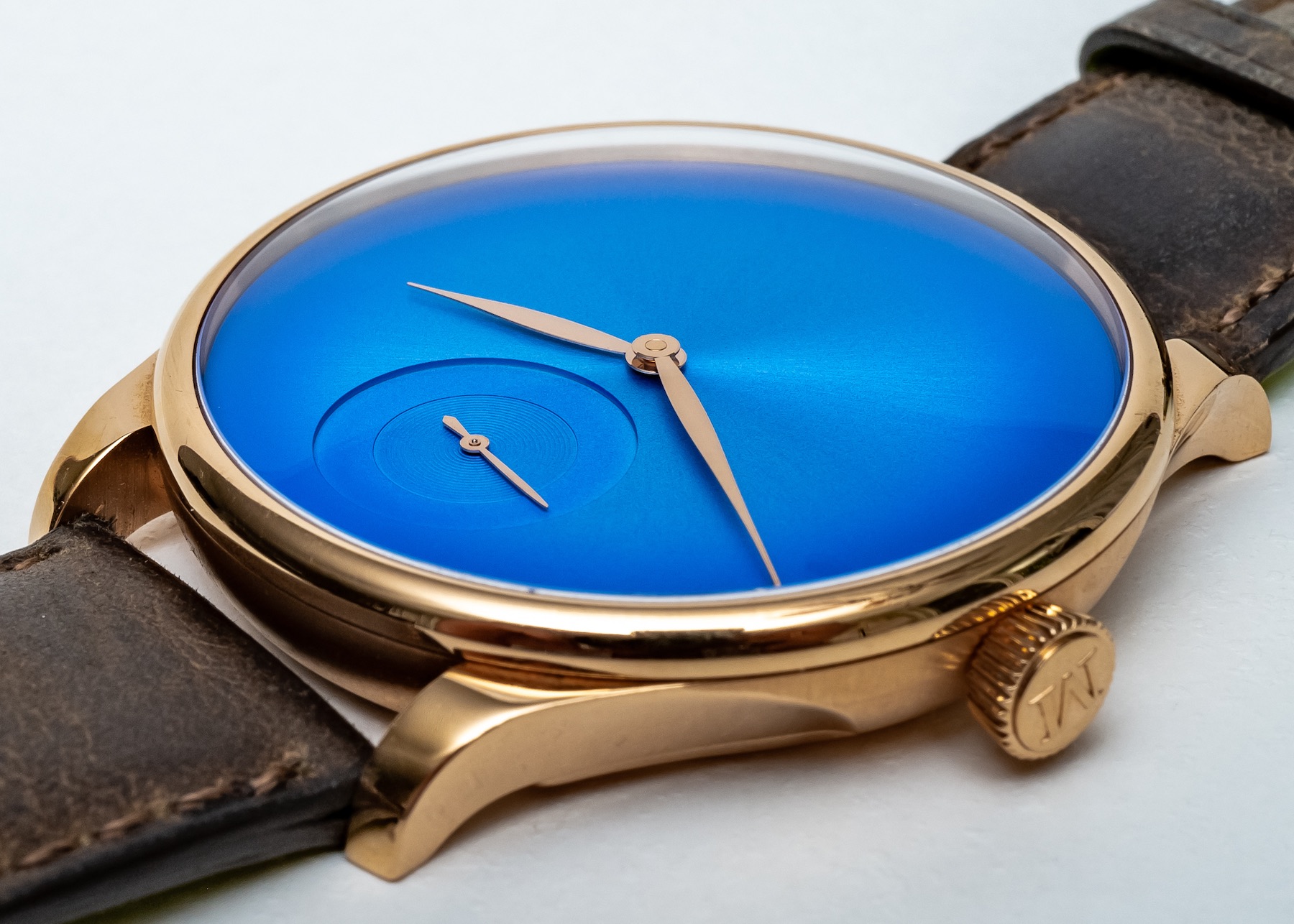 There are few truly, and literally, unique blue dials out there. A watch in my personal collection, the Rolex Milgauss 116400GV “Z-Blue” comes to mind (a watch some unfortunate soul once called “the worst watch ever”…but that’s a different article for another day), with its blue dial and green sapphire crystal that play against each other resulting in a dynamic blend. I’ll now add Moser’s Arctic Blue to the shortlist. It’s an empyrean delight to behold, a warmly humming light blue that is so vibrant in person that it almost appears backlit. 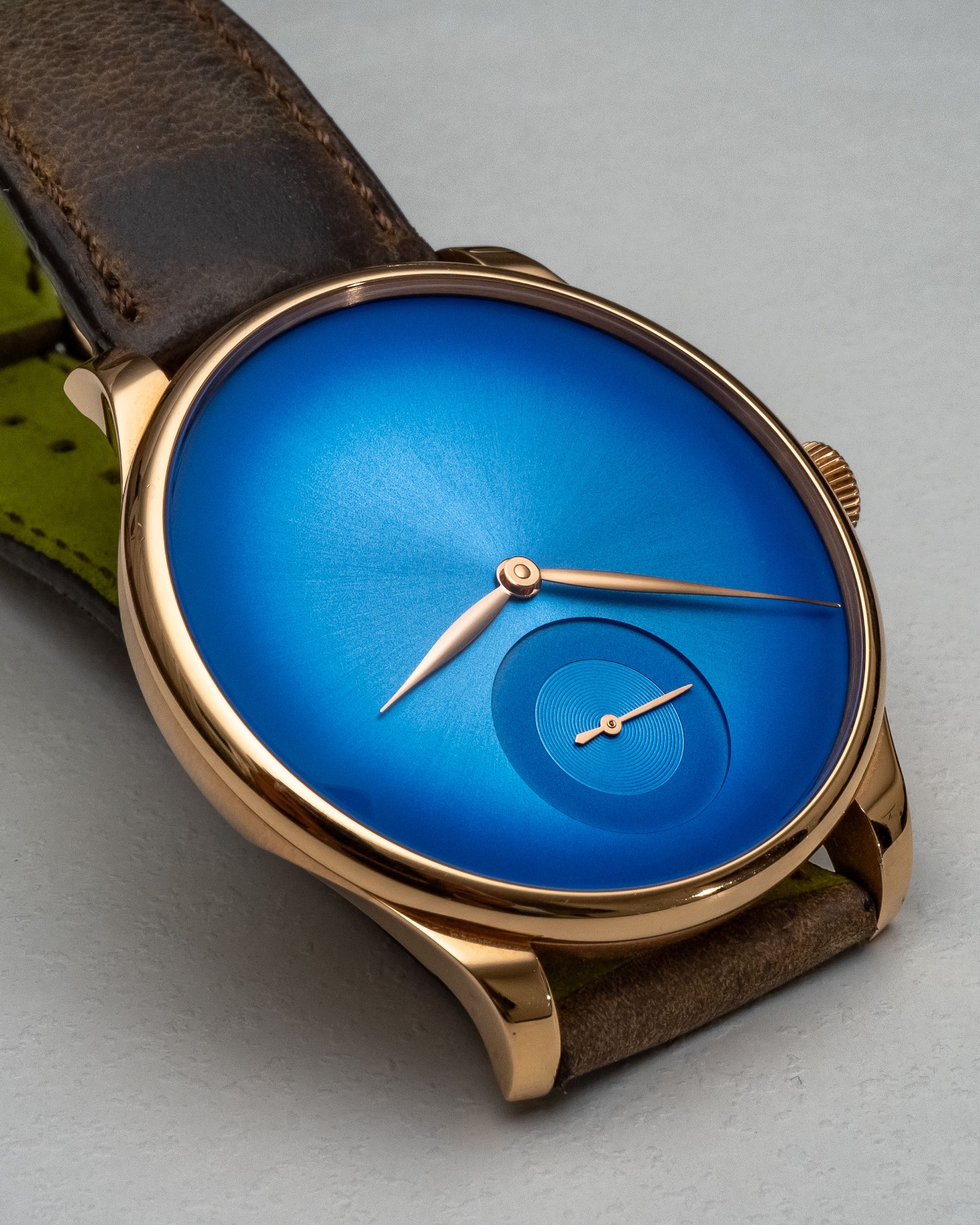 Have you ever tasted an apple from an orchard that is so perfect that you begin to see the everyday grocery store variety as a cheap imitation? They both are equally considered to be “real” apples, but only one captures the essence of the fruit while the rest are compromises. This is how the Moser Arctic Blue made me feel about other blue dials (specifically, the lighter blue). On paper, it’s something quite basic but in reality, it is a close-to-perfect realization of something simple — in this case, a color. 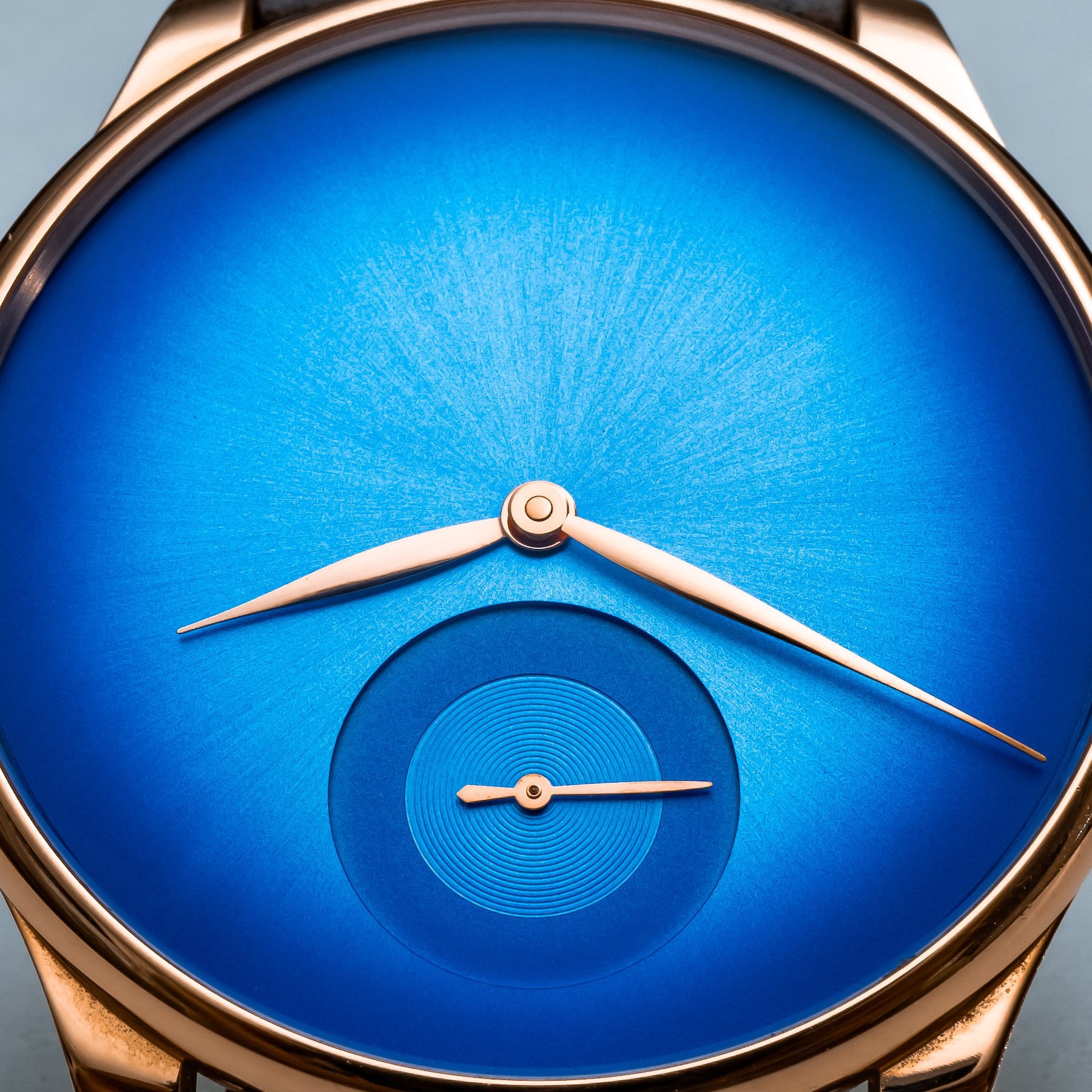 As for the selective trimming of dial elements, no doubt some of you will ask, “Why did they keep the seconds subdial?” A fair question, but one that fell by the wayside for me. With its hand gliding along the guilloché subdial like some dreamt Zen garden, it’s just what this Venturer Concept needs to avoid verging into barrenness. 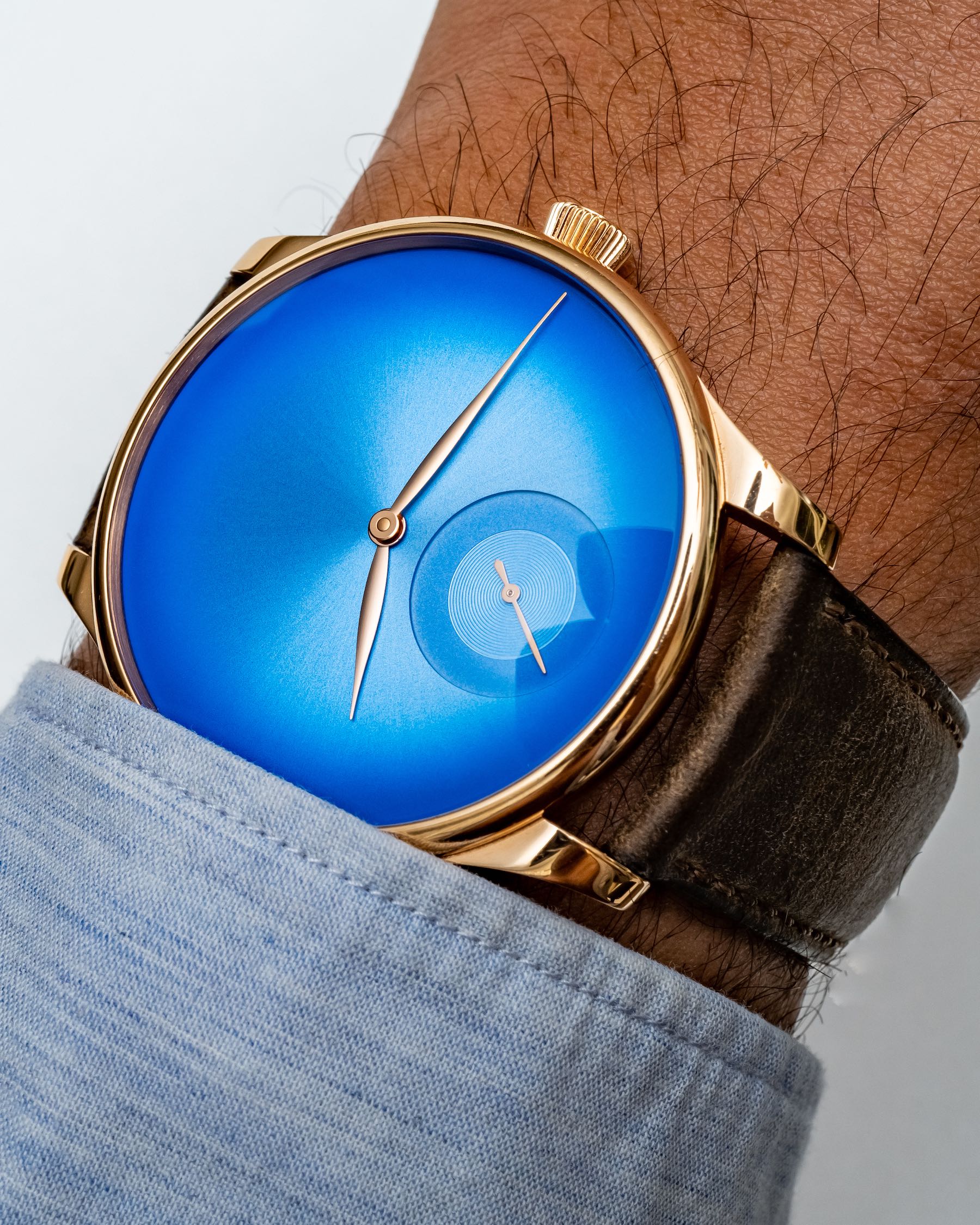 I believe this is the largest case size that H. Moser & Cie makes, at 43mm-wide with a thickness of 12.6mm. Ordinarily, I would say that this Venturer Concept could have been accomplished in a smaller case size, but in this case the size of the canvass matters. I just spent the lion’s share of this article waxing poetic about how brilliant Arctic Blue is, and I am certain that ample real estate is necessary for its visual impact. The choice of rose gold works well against the dial, adding a soft warmth that balances the blue in a way steel or white gold simply could not. In fact, I believe there was a steel Arctic Blue Venturer Concept made for the Middle East market (keep in mind it’s taboo for men to wear yellow or rose gold in the Muslim world), and it does lose of that punch. 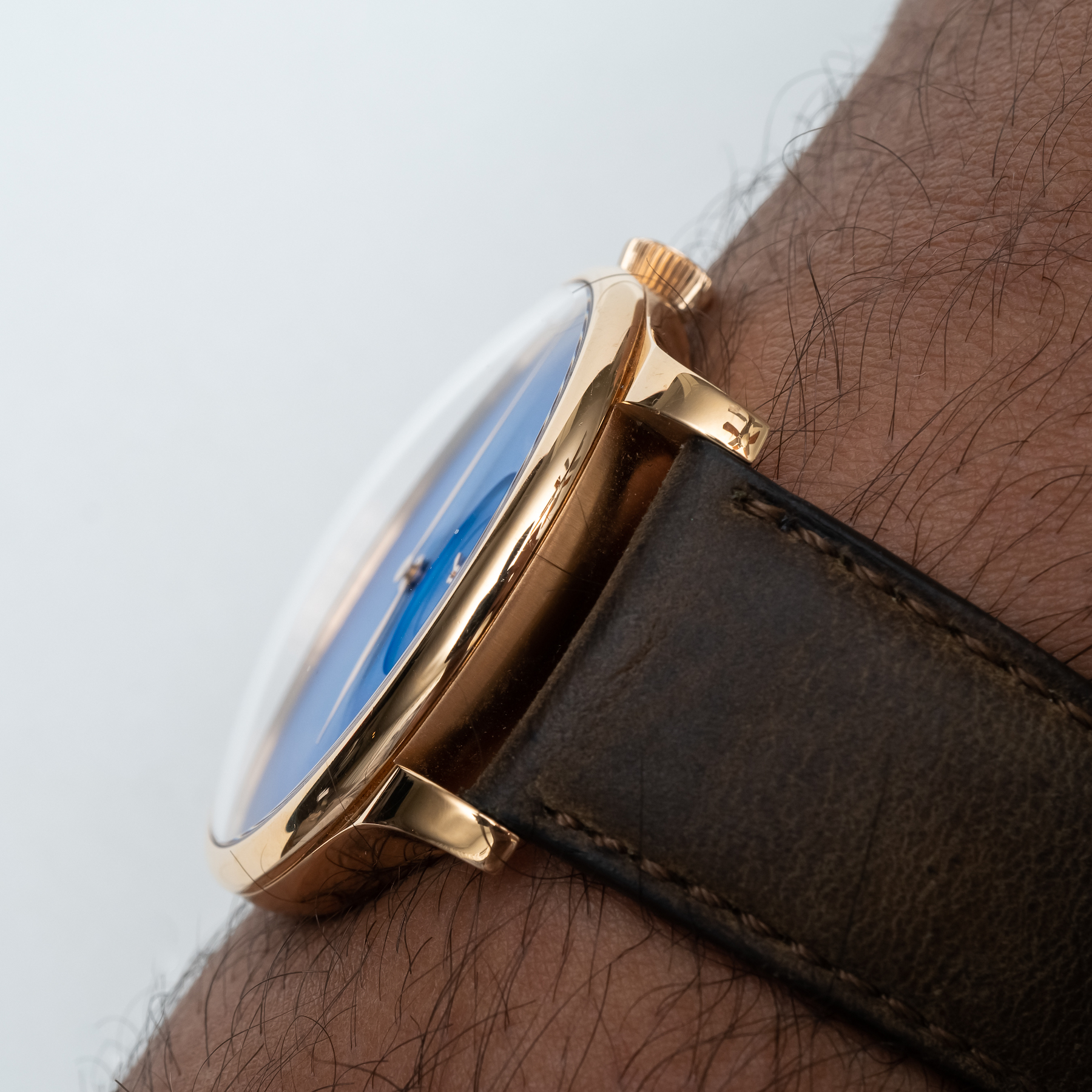 On the wrist, I found the 43mm case of the Venturer Concept XL to certainly wear as large as its dimensions read. With its curved crystal and substantial, though fortunately curved, lugs, it is not something I would classify as being in the unisex category. Still, it’s a comfortable wear on a 7.5-inch wrist. One more thing: The crown is nice and large with great ease of use when setting the time. 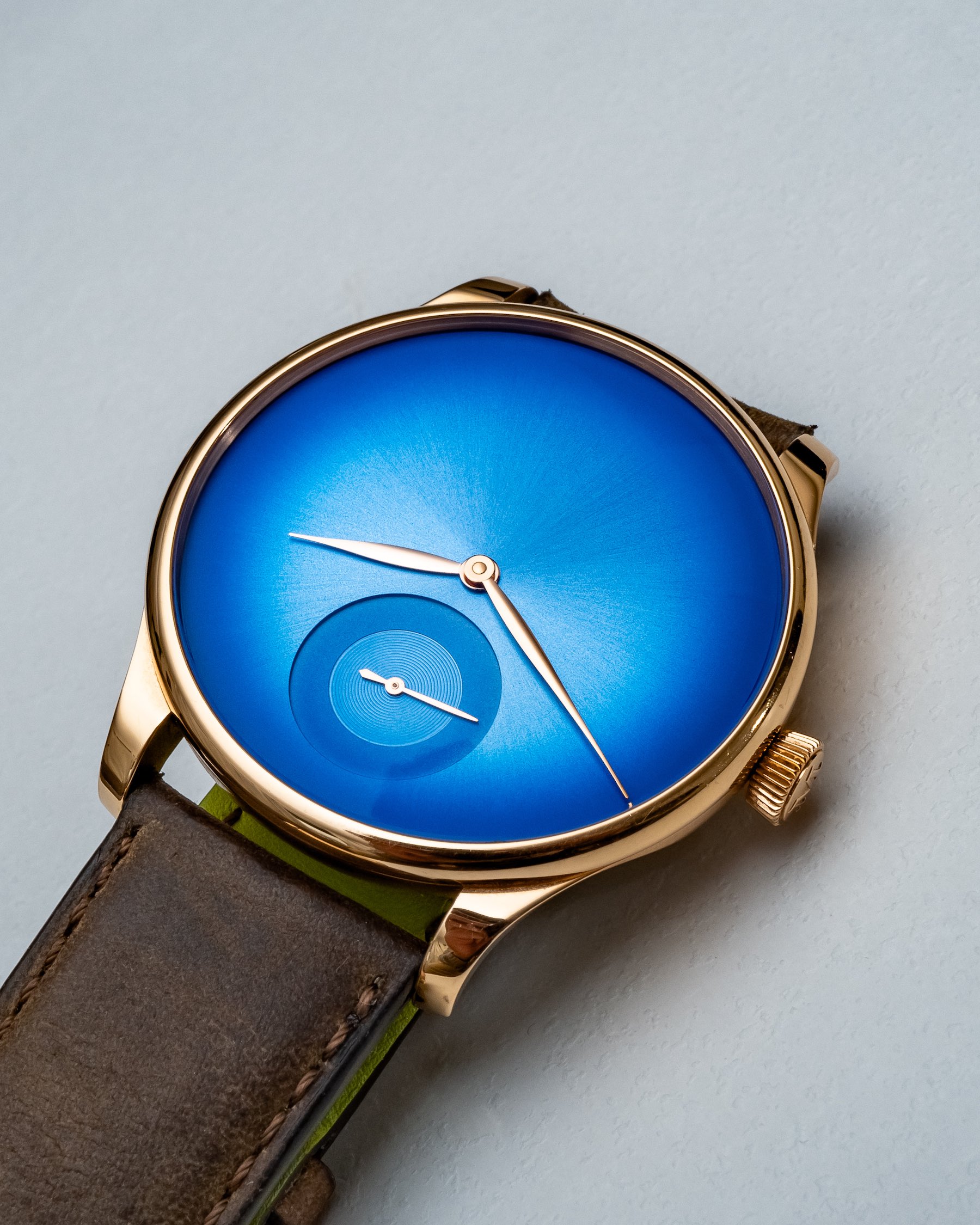 The leaf (feuille) hands have a satisfying length and, while this is not the most legible anti-glare watch in the world, I do think that some people have overblown the issues with glare on some of Moser’s Concept watches. Watch media too often conflates “hard to photograph” with “illegible,” and that isn’t entirely true — the Venturer Concept Arctic Blue is a good example. 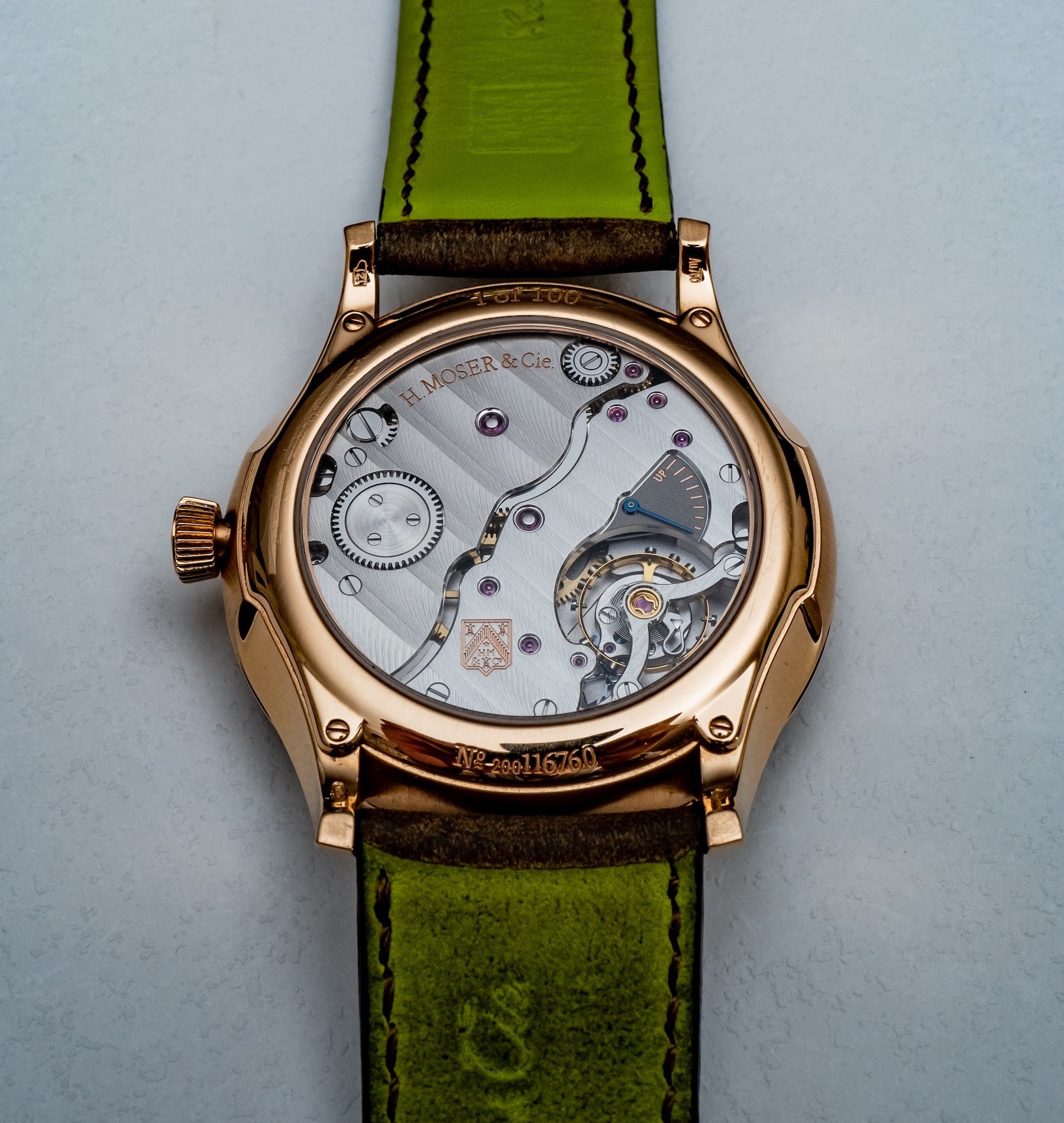 From the exhibition caseback you can see the manual-wind HMC 327, an H. Moser & Cie classic. With its idiosyncratic fissure running down the middle, this is a hand-finished movement that stands up there with the best of the best in Swiss watchmaking. It operates at 18,800 vph with a three-day power reserve that is measured by an indicator on the case back. The HMC 327 is finished pretty exquisitely with hand-done Geneva stripes, but it also demonstrates technical chops with its in-house-made Straumann Hairspring with Breguet hairspring which helps maintain accuracy over time. 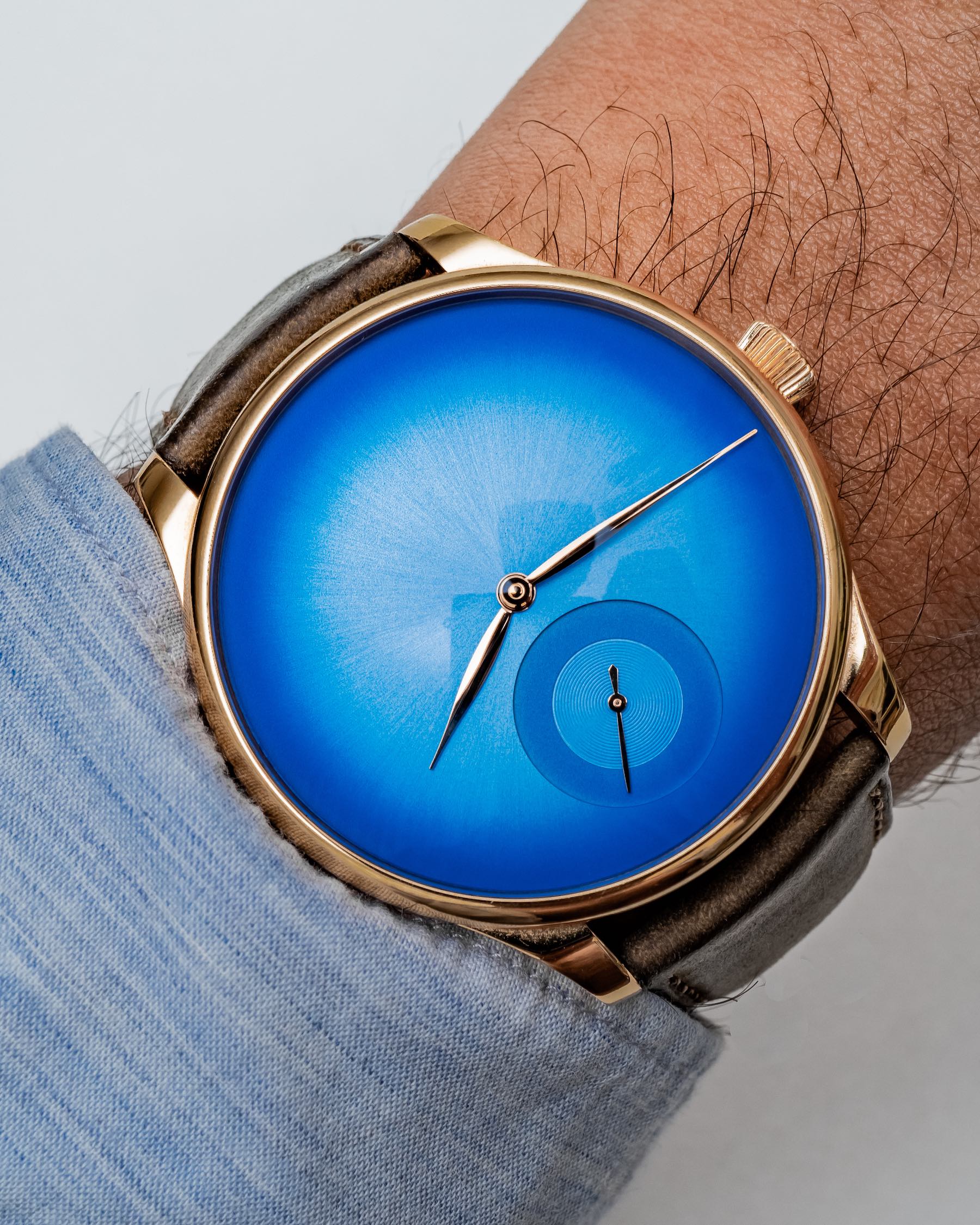 The H. Moser & Cie Venturer Concept Small Seconds XL in Arctic Blue is a minimalist triumph and, ultimately, a fascinating study in color and how humans perceive it. It’s is also, not surprisingly, a limited-production piece, with a run of 100 watches. It has a price of $25,500. You can learn more at h-moser.com.