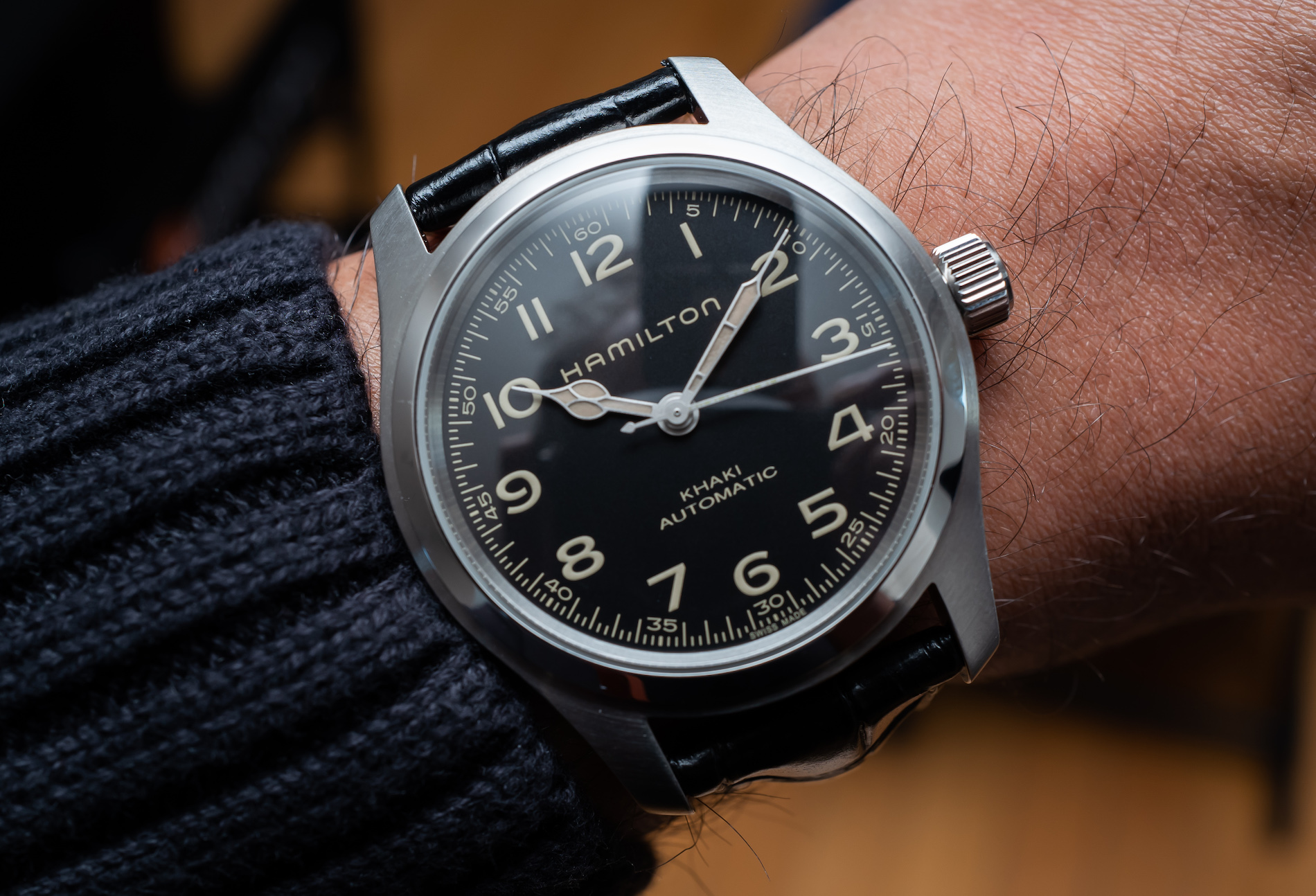 Right after the release of Christopher Nolan’s sci-fi movie, Interstellar, we took a look at the Hamilton watches worn by the likes of Matthew McConaughey and Jessica Chastain, one of which was the “Murph” field watch specifically made for the film. Named after the character Murph Cooper, only ten units were ever produced, and all but one (that was given away) were returned to Hamilton after filming. Now five years later, an exact reproduction of the watch from Interstellar, the Hamilton Khaki Field “Murph” watch has been announced, with a price of $995. To my surprise, it’s not a limited-edition piece, although the first 2,555 pieces will come in a special packaging designed by Nathan Crowley that is inspired by the tesseract in the movie. The actual watch used in Interstellar

The producers of Interstellar commissioned Hamilton to create the custom “Murph” watch based on a set of specific requirements they had, and the design was a hit among the watch enthusiasts who saw the movie. The simple and symmetrical dial was intended to reflect a tool-watch aesthetic, a tease for people who wanted a no-date Khaki watch, since no production model came without one. People familiar with the movie can skip the following paragraph, but if you haven’t seen it, Hamilton does a pithy job in summing up the role of the “Murph” watch in Interstellar:

In the film, the existence of humanity is under threat, and a team from NASA uses interstellar travel to try to find a new planet. Cooper, a former NASA pilot, joins the mission, which means leaving his daughter, Murph. Cooper gives Murph his watch. From inside the ‘tesseract’ of the fifth dimension, Cooper sends a message using Morse code through the seconds hand of Murph’s watch. It is the quantum data that will help humanity escape dying Earth. When she works out the formula, Murph shouts ‘Eureka!’ to mark her discovery. Humanity is saved. Earlier, I said the watch is identical to the piece in the movie, but there actually is one difference that has to do with the Morse code scene. You may recall that, in order to achieve the Morse code scene in the film, a prop master partially deconstructed the movement and inserted a small servo motor to have the seconds hand operate as it did. A tribute to this scene is the addition of the word “Eureka” done in lacquer in Morse code on the seconds hand. It’s really not noticeable without a loupe, and it’s a pretty ideal tribute to the film. When we consider the in-your-face branding a lot of watches with ties to things like a blockbuster film do, the subtlety is refreshing. The Hamilton Khaki Field “Murph” watch comes in a 42mm-wide case with a black dial and beige poire squelette-style hands that have applied lume. The dial has an outer seconds track and hour numerals in beige, with the text at 12 and 6 o’clock being the only other dial embellishments. It’s a lot of quasi-vintage design touches married with a contemporary case size that really only left me with one gripe. I don’t believe the sapphire crystal has anti-reflective coating, and glare was pretty noticeable at times. I’d not ordinarily make a big deal out of it if it was only a limited-edition enthusiast piece. Inside the watch is the automatic H-10 movement, which has an 80-hour power reserve. This is a modified ETA 2824-2 movement that’s been used in several Hamilton watches for some time now. It’s visible through the exhibition caseback, but there isn’t really anything special here to otherwise distinguish this piece. And again, even though the first 2,555 pieces will come with the special packaging, there won’t be any number engraved on the case back to distinguish one of those from one bought without the tesseract-inspired special packaging. Nathan Crowley, the production designer for Interstellar, designed the box which is done in a plastic and recalls the giant hyper-cube structure in the movie. It’s pretty cool looking, for sure, though I can’t speak to seeing it in person when I saw the watch itself (the above is a press photo provided by Hamilton).

Again, the Hamilton Field Khaki “Murph” watch is priced at $995, and I have a feeling that the appeal is going to reach far beyond Interstellar fans. The watch with one of the 2,555 limited-edition boxes carries no price premium. You can learn more at hamiltonwatch.com