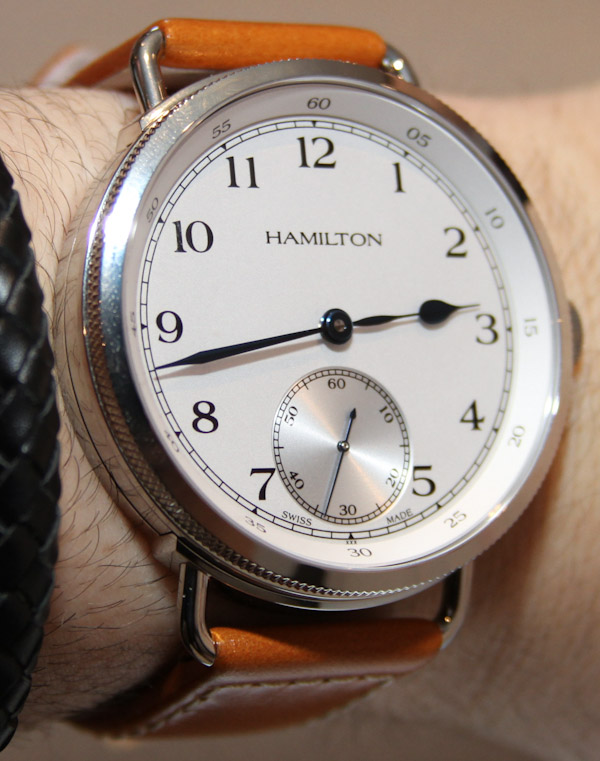 The piece is the Hamilton Khaki Navy Pioneer Limited Edition, and you can consider it a convertible watch. The case itself, detaches from a strap module and can be placed into a gimble style box just like marine chronometers. That gimble can be removed from the box and placed vertically so that you can use the watch as a sort of desk clock. You can lock the gimble in place to prevent the watch from moving around. Cool right? I love these convertible style pieces. 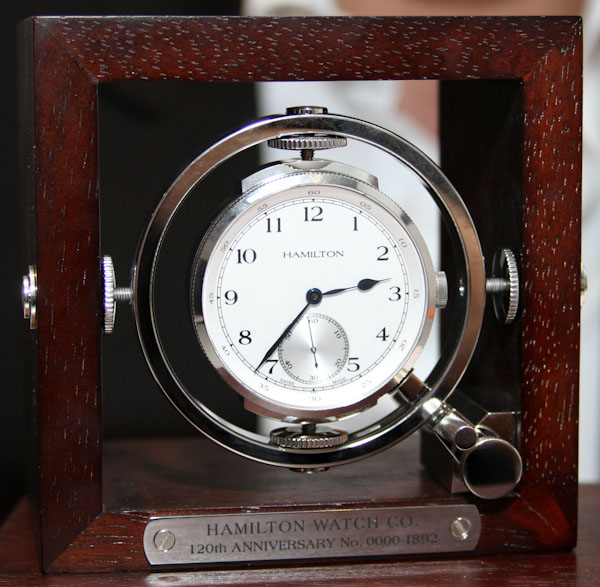 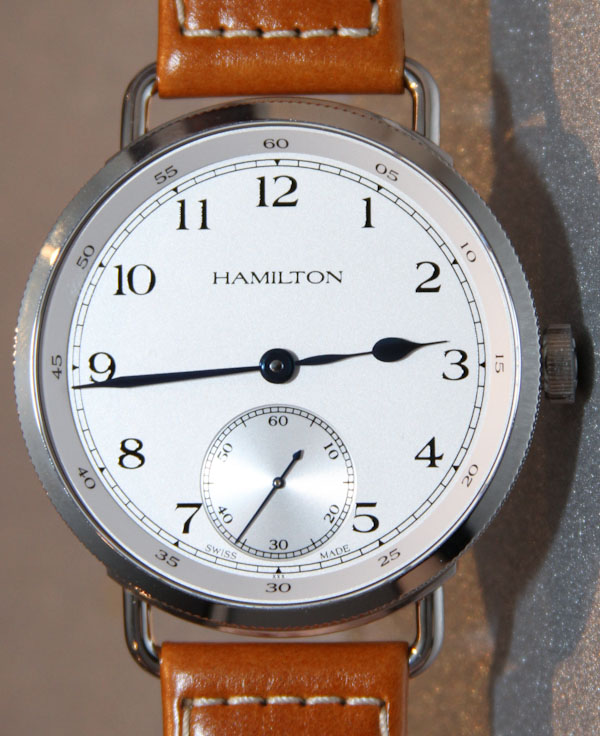 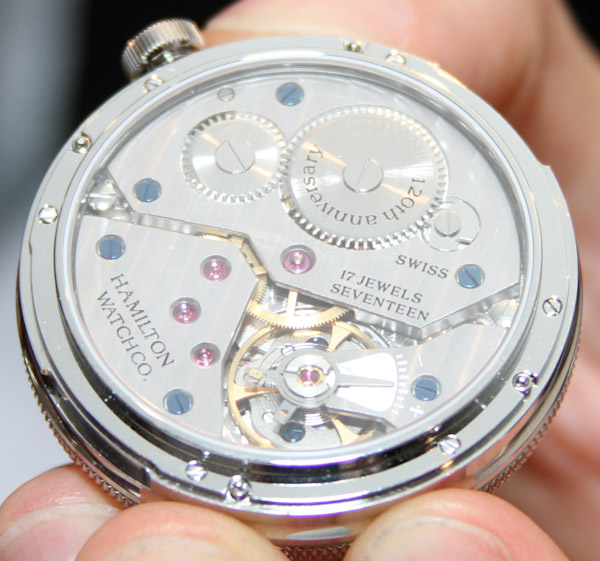 Anyone familiar with Navy or ship “deck” watches will understand the aesthetics behind this piece. I’ve always found this look to be very elegant as well as legible. The silvered dial works well with the properly sized blued-steel hands. Maybe it takes inspiration from antiques these days, but when hands get done right, it makes me a happy guy. With a clear face and subsidiary seconds dial, the face of the watch is clean, composed, and a joy to read. Again, not a new design at all, but a satisfying piece of history.

Hamilton went and made the case of the Hamilton Khaki Navy Pioneer interesting as well. The limited edition version is 46.5mm wide in steel, and has a great looking coined edge bezel and attached lug structure. I like the looped lugs with the case style as well as the light brown leather strap. It looks very handsome on the wrist. Inside the limited edition version of the watch is a manually wound Swiss ETA UNITAS 6498 movement. Hamilton uses a decorated mid range version of the 6498 that can be seen in the case when you detach it from the strap module. 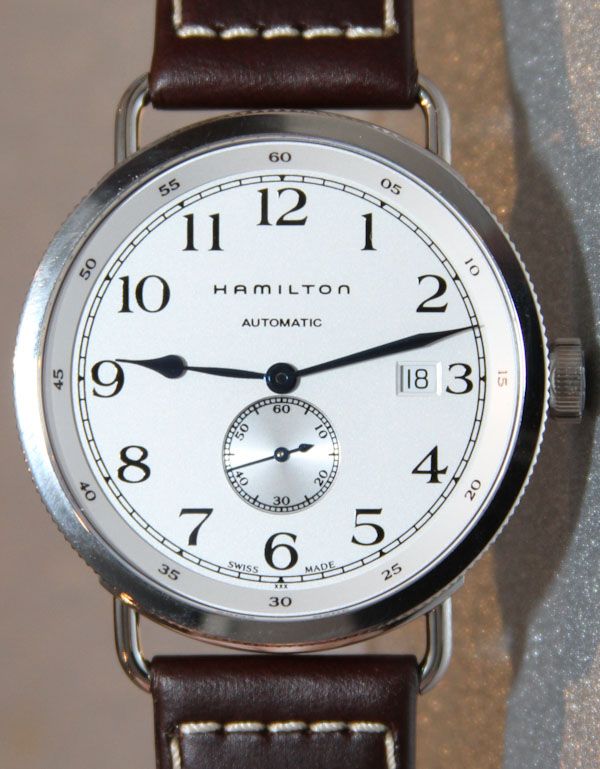 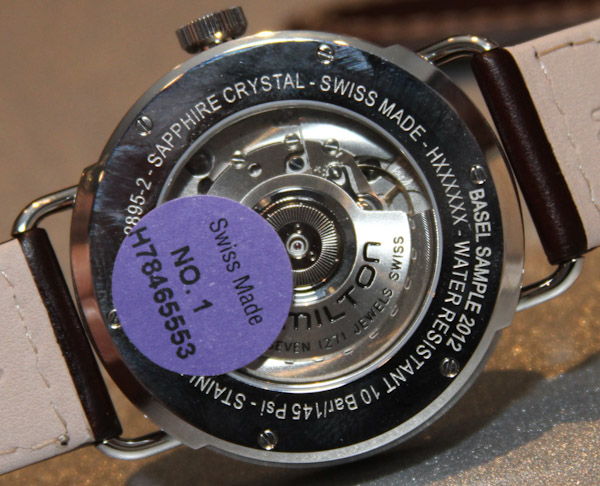 The strap module is well-done and integrates a backplate with applied perlage polish. You just twist in and lock the case into it. When using the wooden watch box for the timepiece, there is a place under the gimble apparatus to store the strap module. The 46.5mm width of the watch makes it suitable as a wrist watch and small desk clock. I think it would look very handsome in the wooden frame on one’s desk.

Hamilton will build 1,892 pieces of the limited edition Khaki Navy Pioneer. In addition to this model they will offer a non-limited version as I mentioned. The standard Khaki Navy Pioneer will have some distinct differences. First, the case is smaller – I believe about 42mm wide. Second, while it looks similar, the detailing on the case and dial aren’t quite as sharp as the higher-end limited edition piece. The standard version is also not a convertible watch and will not detach from the case nor come with the neat marine chronometer box. 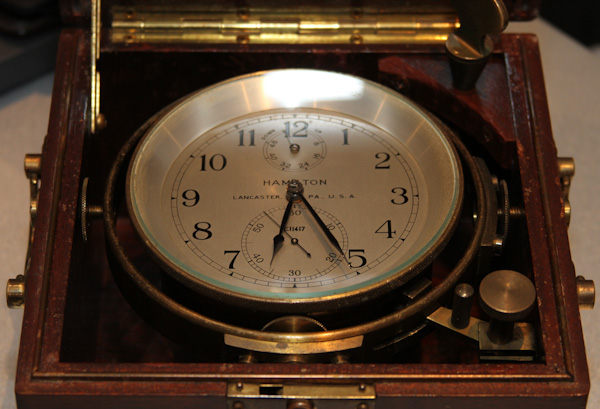 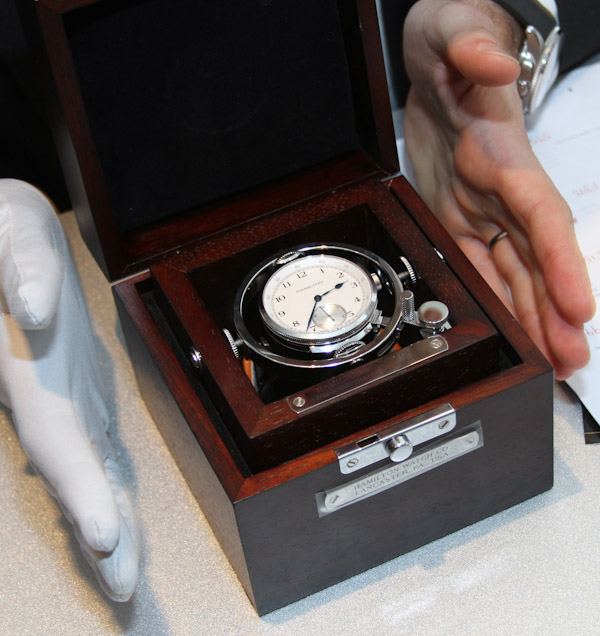 On the plus side, the non-limited version of the Hamilton Khaki Navy Pioneer will come with a few dial color choices and contain an automatic versus manually wound movement. I believe that inside the watch will be a Swiss ETA 2895 automatic with the date and subsidiary seconds dial. While I like the fact that the standard models have automatic movements, the limited edition piece is of course the most interesting. Though I feel that the masses will get a lot out of the standard pieces as they are quite attractive as well. While simple and vintage inspired, these Khaki Navy Pioneer watches are some of the nicest stuff to come from Hamilton in 2012 (which overall has a pretty strong new collection). Price for the limited edition model is $2,945, and the non-limited model is priced at $1,095.