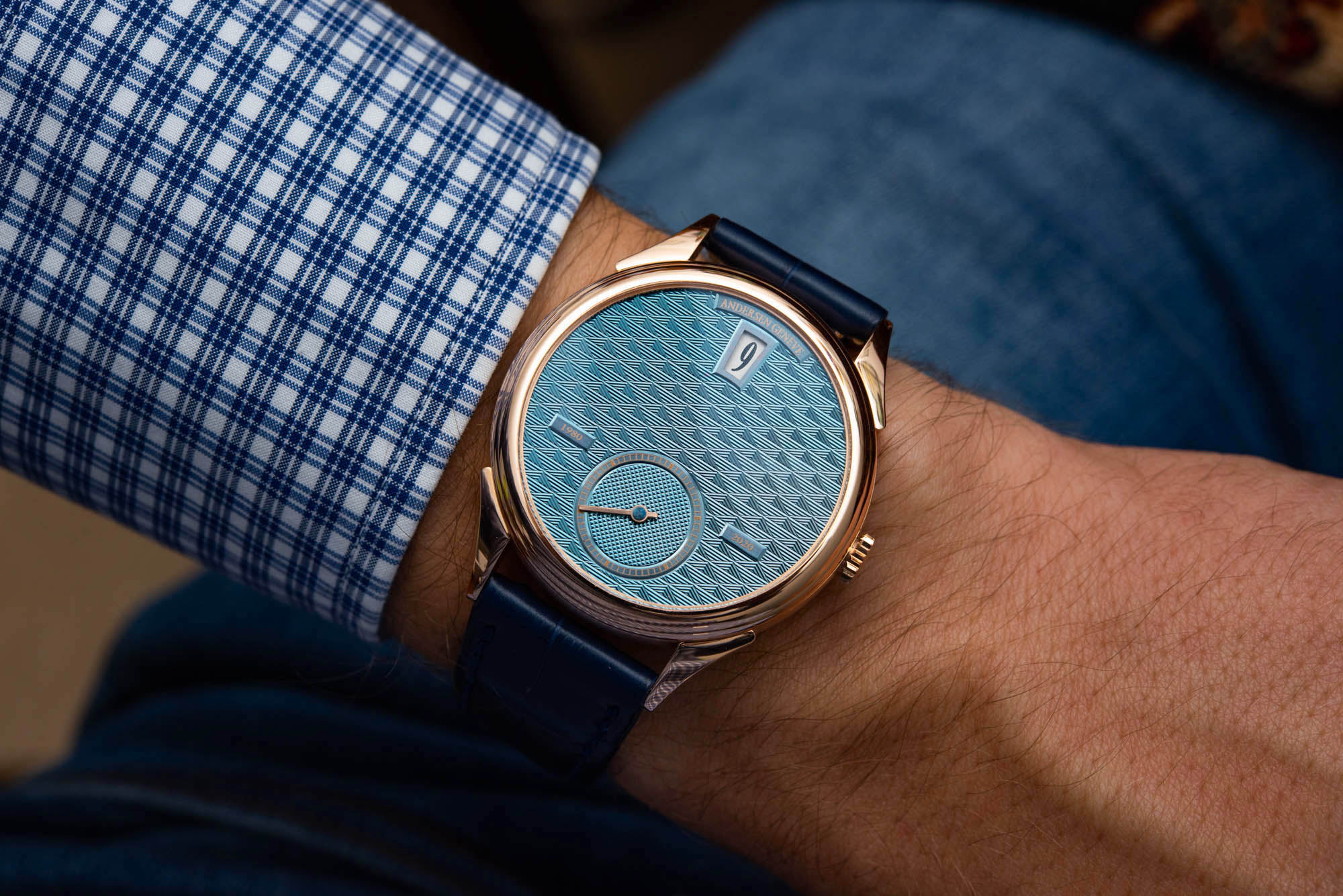 If you are looking to find a tiny oasis of old-school watchmaking in Geneva, all you have to do is walk southwest a few minutes along the Rhône, find the right staircase, and knock on the right door, and you’ll find the seemingly always high-spirited Svend Andersen and his proper-traditional watchmaking workshop. A detailed workshop visit article is yet to come, but first, let’s see some of his latest creations with the Andersen Geneve Jumping Hours 40th Anniversary watch. 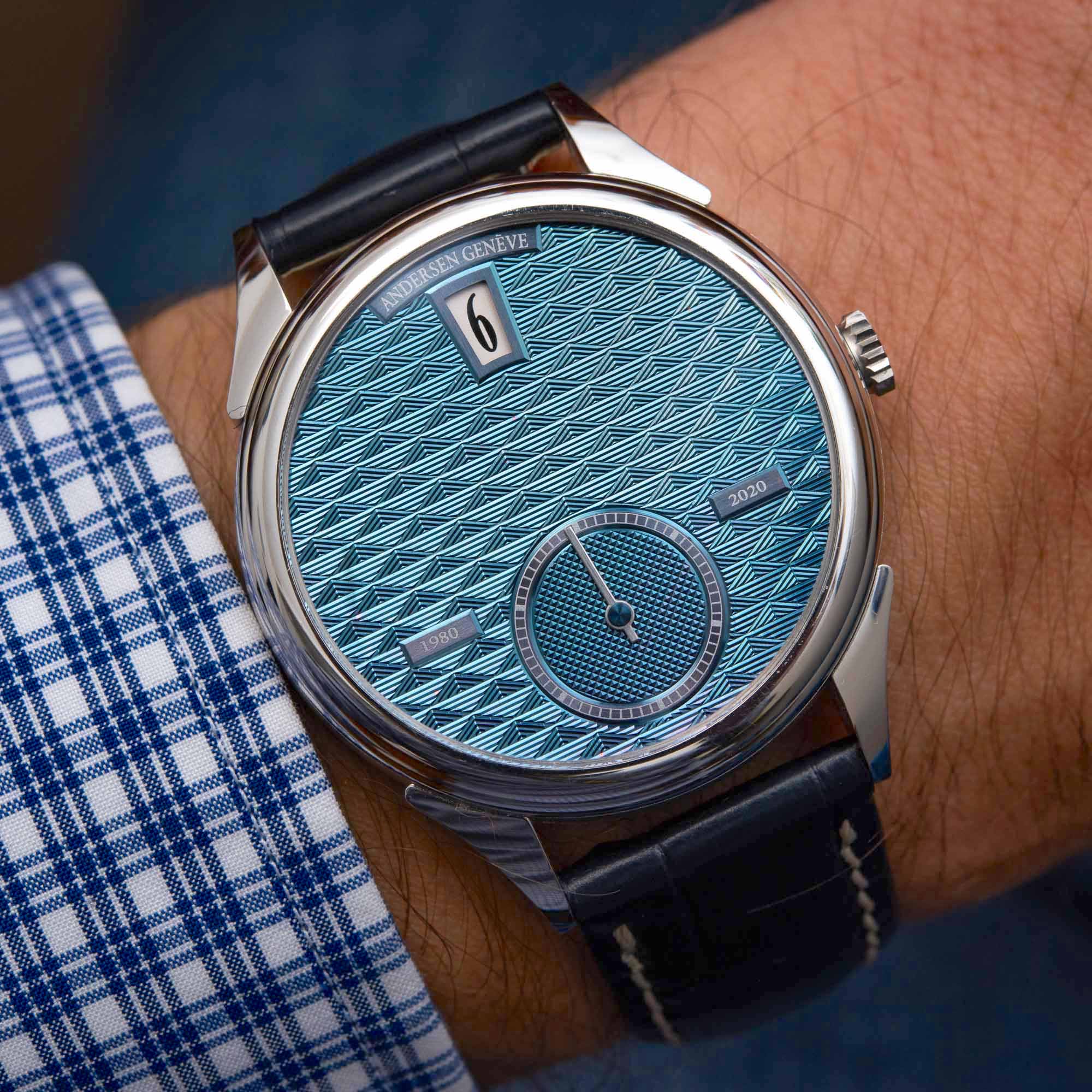 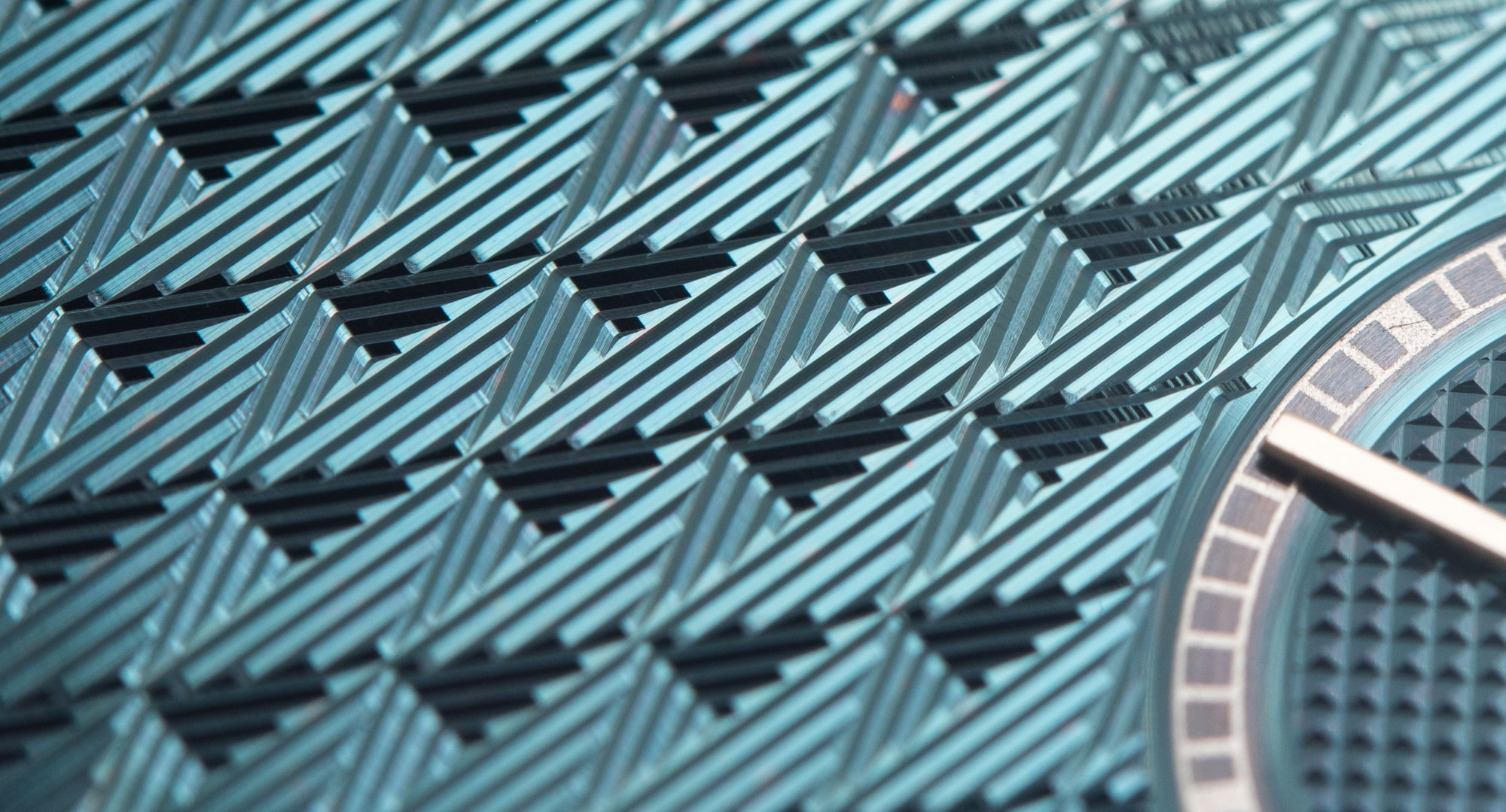 Born and trained as a watchmaker in Denmark, Andersen has an impressive, if lesser-known, track record of achievements as a master watchmaker. He moved to Switzerland in 1963 and worked for nine years at Patek Philippe’s Atelier des grandes complications from 1969 before establishing his own workshop as an independent watchmaker. Interestingly, he began by producing high-end cases for Italian collectors, a work that entailed unique piece consignments, often with whimsical and unique time displays and calendars. 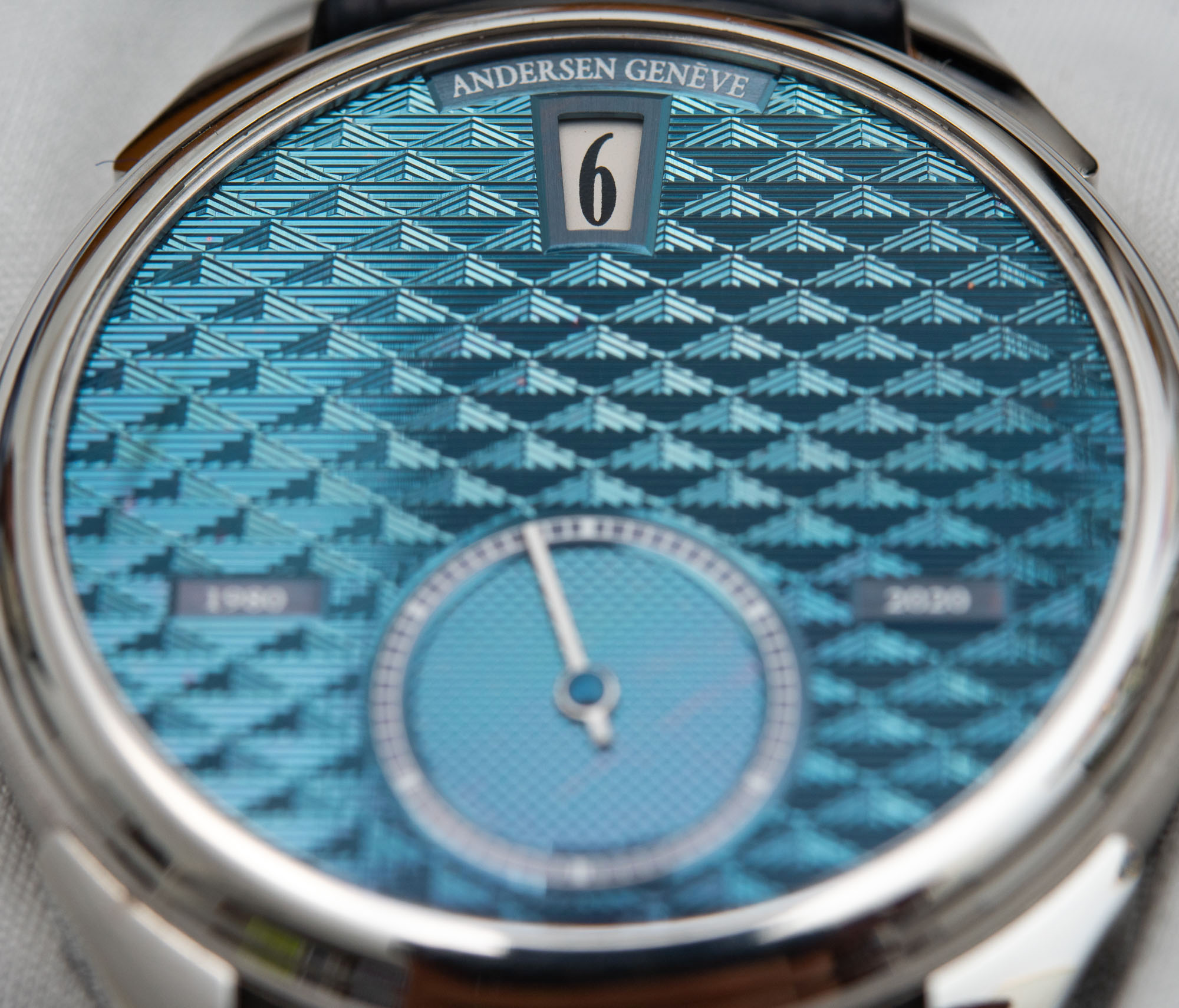 The Andersen Geneve Jumping Hours 40th Anniversary watch links to one such consignment dating back to 1980. That special piece combined nothing less than a minute repeater with a jumping 24-hour display – this worked out so well that Andersen created a variation on the theme for the 125-piece limited edition Cartier Pasha “Grand Jour & Nuit” in 1998. As he explains: “Since then, another ‘Grand Jour & Nuit’ Edition was launched, different Jumping Hours ‘Pièce Unique’ timepieces have been created, and two years ago, Andersen Genève had the privilege to be commissioned by Adrian of convopiece.com to manufacture a new “Pièce Unique” with a Jumping Hours mechanism. In 2020-2021, Andersen Genève is proud to make a new Jumping Hours timepiece to celebrate its 40th Anniversary.” 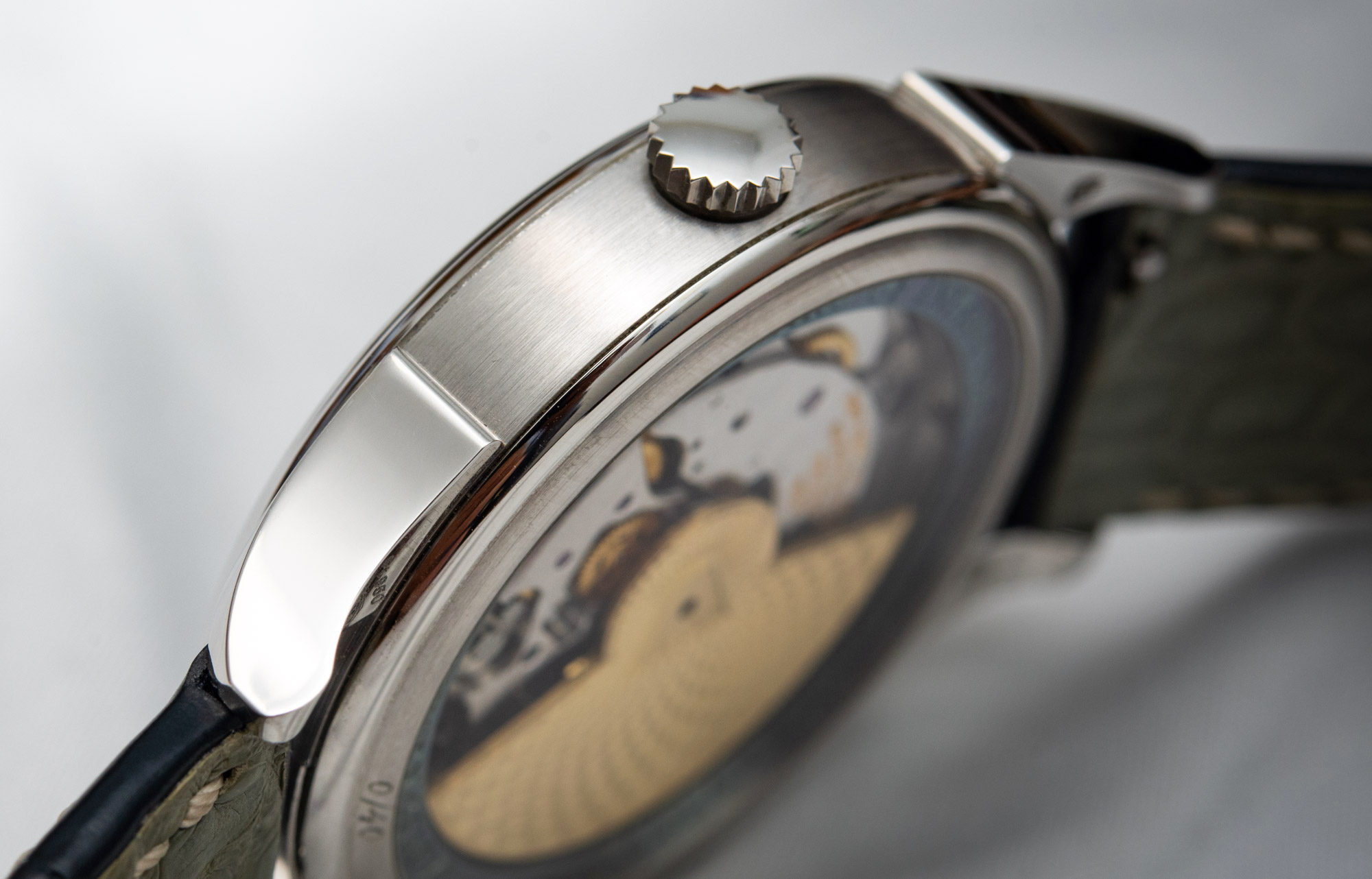 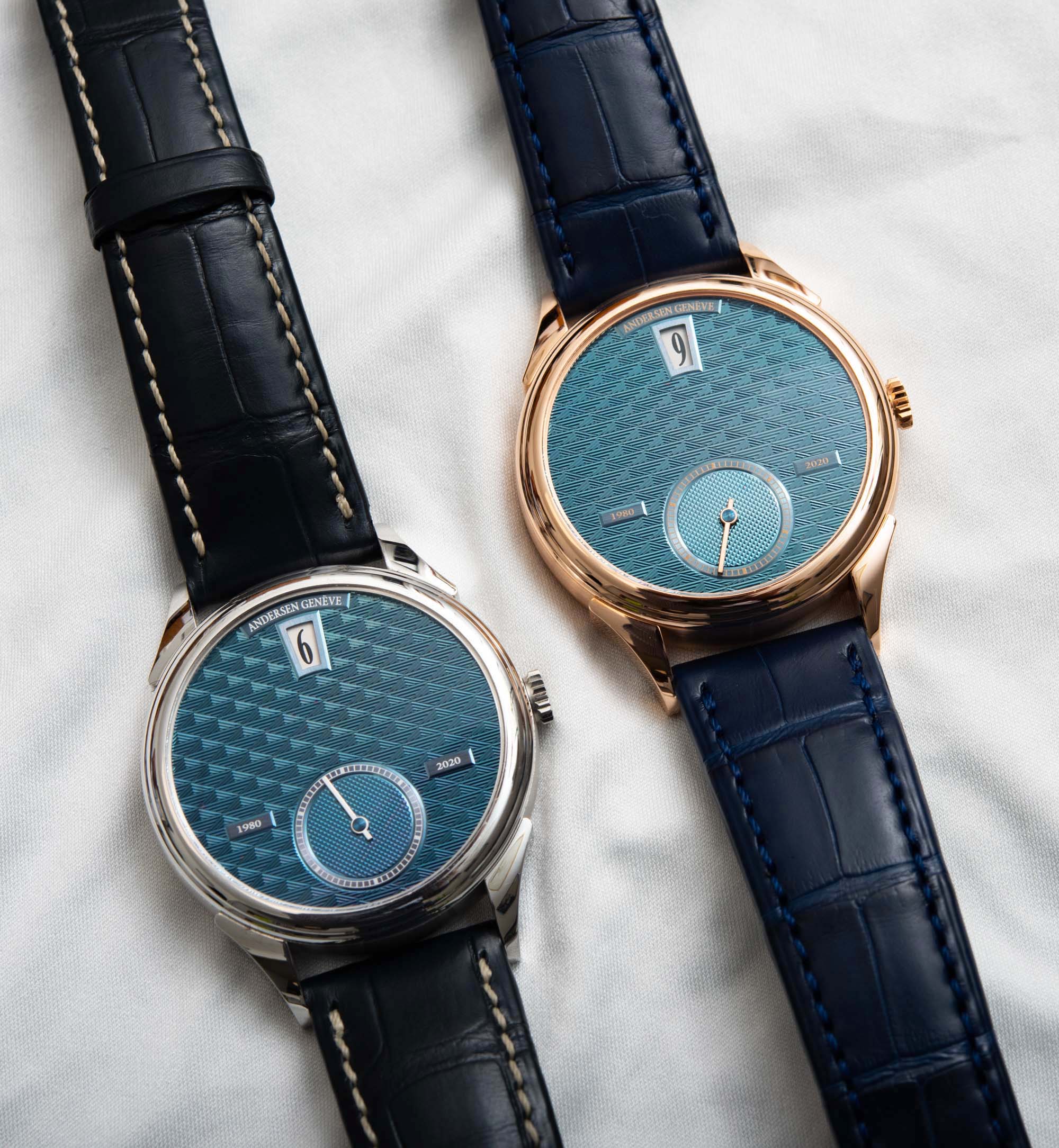 Aesthetics are forever subjective, but I feel safe in saying many will find the Andersen Geneve Jumping Hours 40th Anniversary achingly pretty. Its 38-millimeter diameter is spread with nigh-on perfect proportions between bezel and dial: the dial is expansive but not overly so — it’s confidently contained by the polished and domed bezel. The 19mm lug-width also adds a rather more unique touch, as does their concave shape and polished profile that merges into a brushed case side with a polished crown. It’s all so effortlessly easy on the eyes. 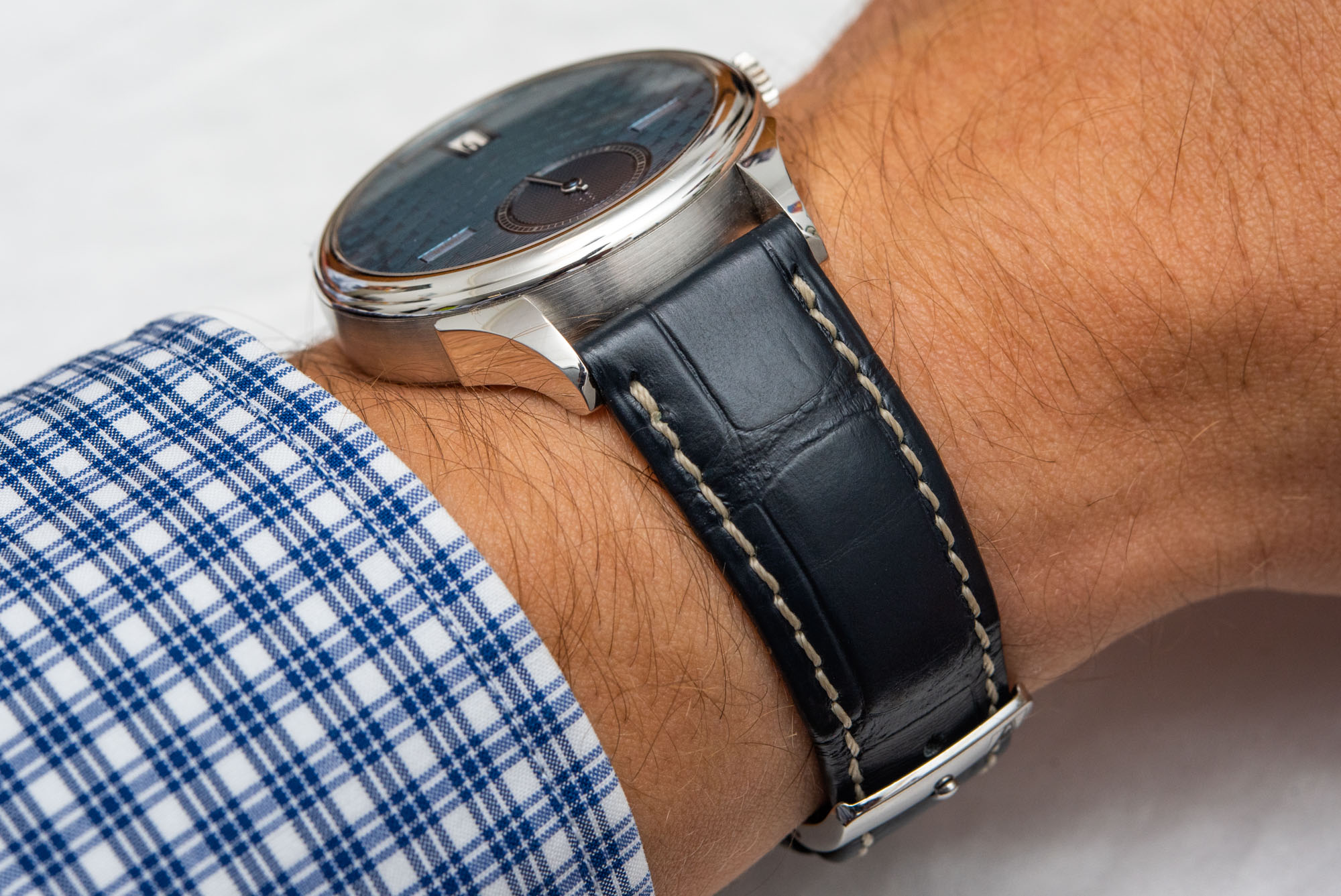 On the wrist, it looks at home in a way that maybe only watches designed with decades of experience do. There is something inimitably remarkable when it comes to the creations of old-school rockstars of the trade like Dufour, Andersen, Roth, and the like — it’s their trademark blend of stubbornness and experience as they work their way toward something they often like to refer to as “just right.” The Andersen Geneve Jumping Hours 40th Anniversary is full of this just-rightness on or off the wrist. I know because handing it back literally hurt.

The star of the show is the guilloché dial that is so insanely intricate it boggles the mind. That’s both the end result and the effort one immediately imagines for it to have taken to realize. It’s crafted from 21k heat-blued gold (that in itself is so enticing) using three different machines, none of which are modern CNC computer-operated machines, but all are hand-operated traditional rose engine lathes. The three-dimensional structure and the way it interacts with light, in my experience, remains utterly inimitable with cheaper stamping methods or lasers. It is no secret that this guilloché dial carries some tiny imperfections where the guillocheur either started or ended the pattern a tenth of a millimeter too far or where some carved marks have been left at the base of a triangle. 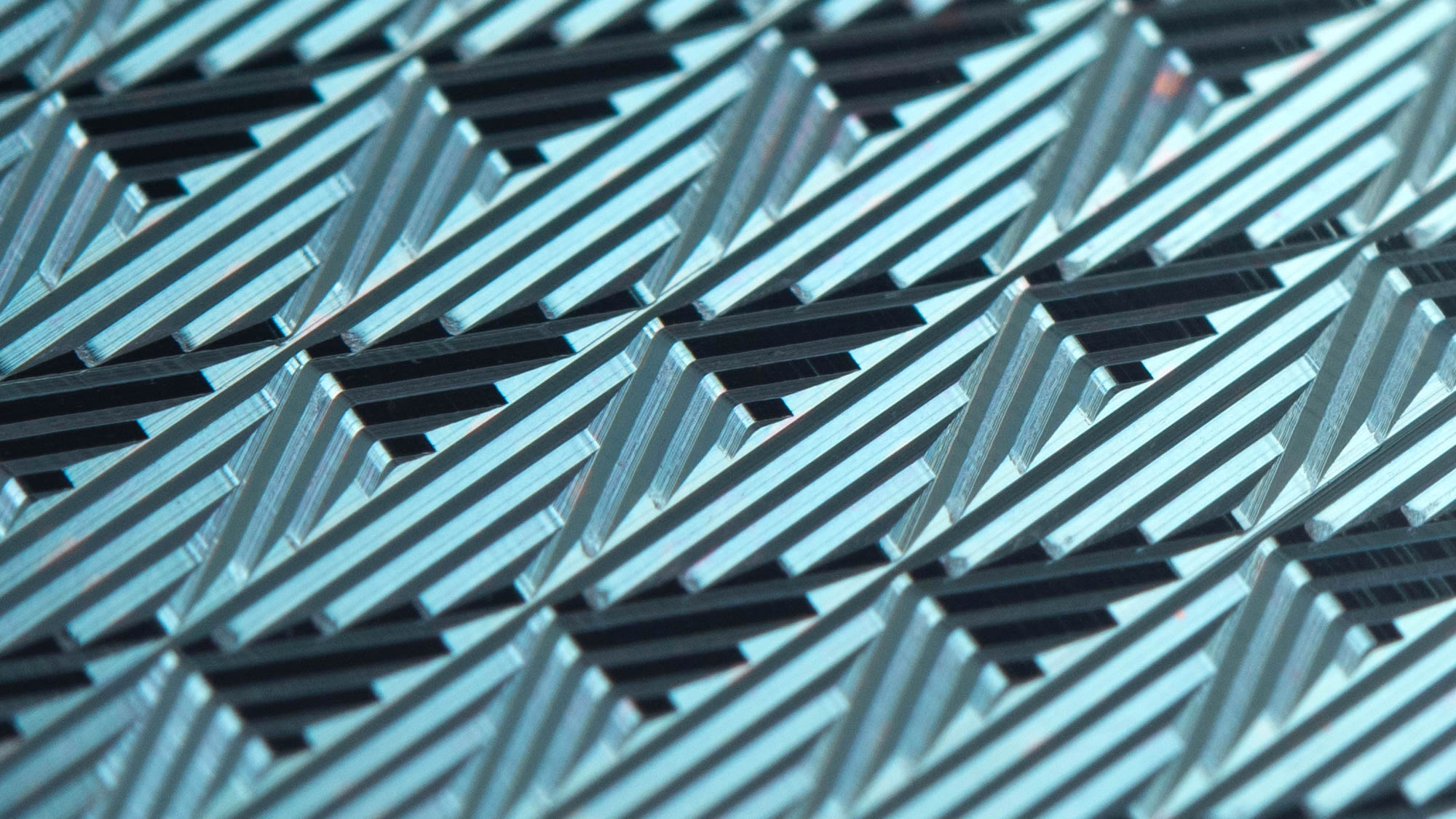 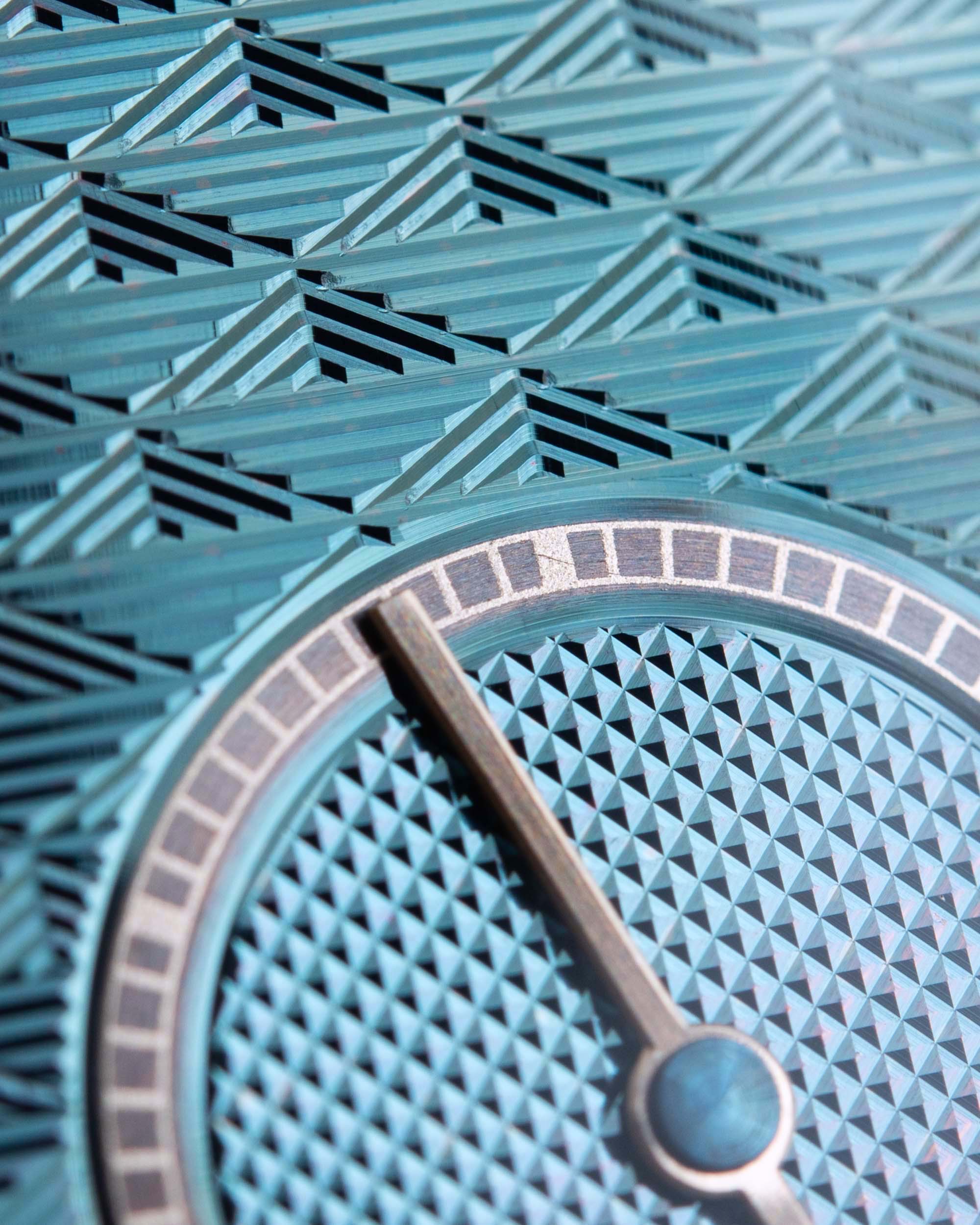 These are extremely rare but the human eye adds these to the full picture when looking down at the dial — and, strangely, the question is not what these microscopic imperfections add to the dial but rather what their absence would remove from it. The way guilloché dials combine the heavyweight aesthetic of something industrial with the intricacy and lightness of something made not with a 600-pound lathe but with the refinement of the human touch.

Good luck programming that into a CNC machine. 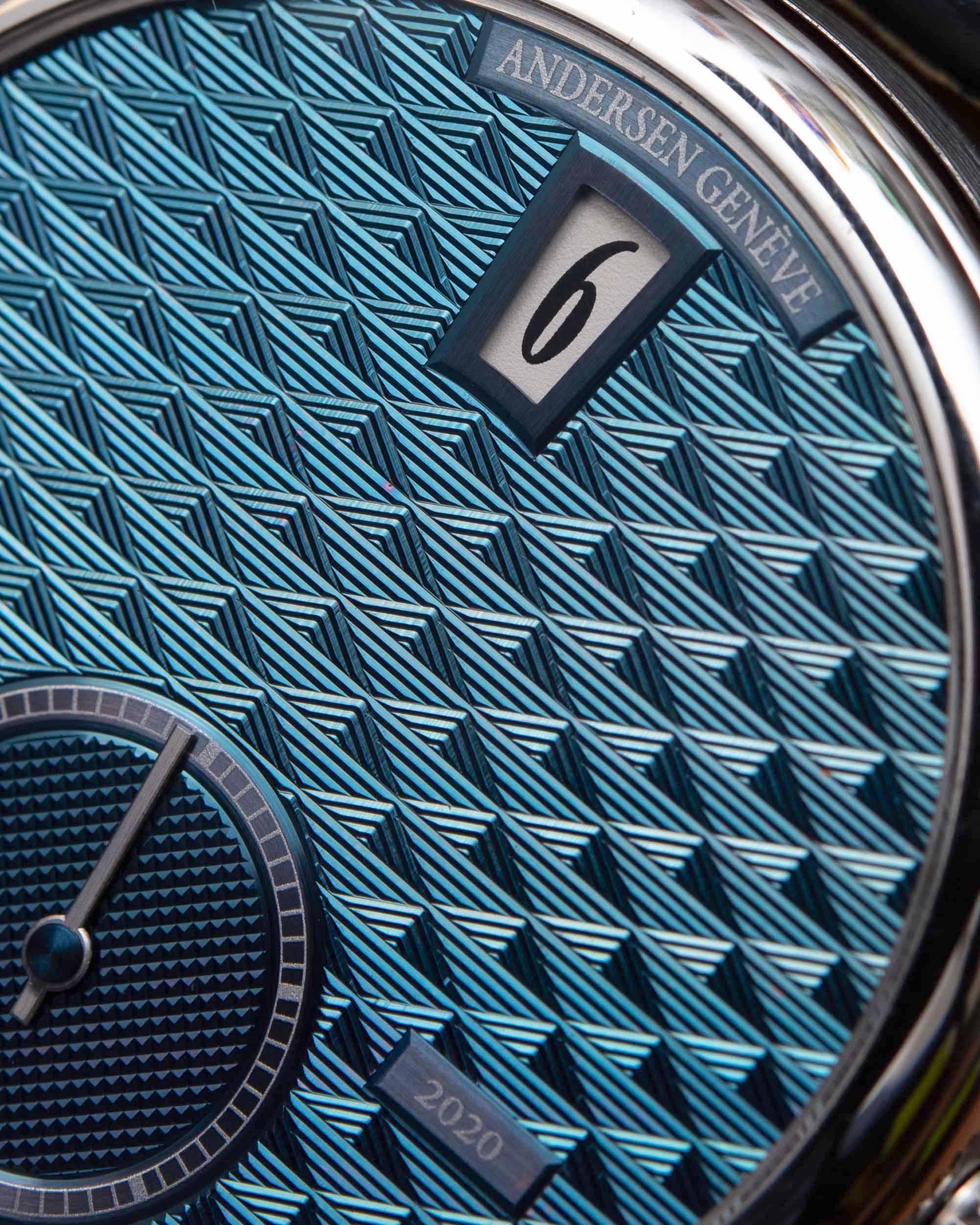 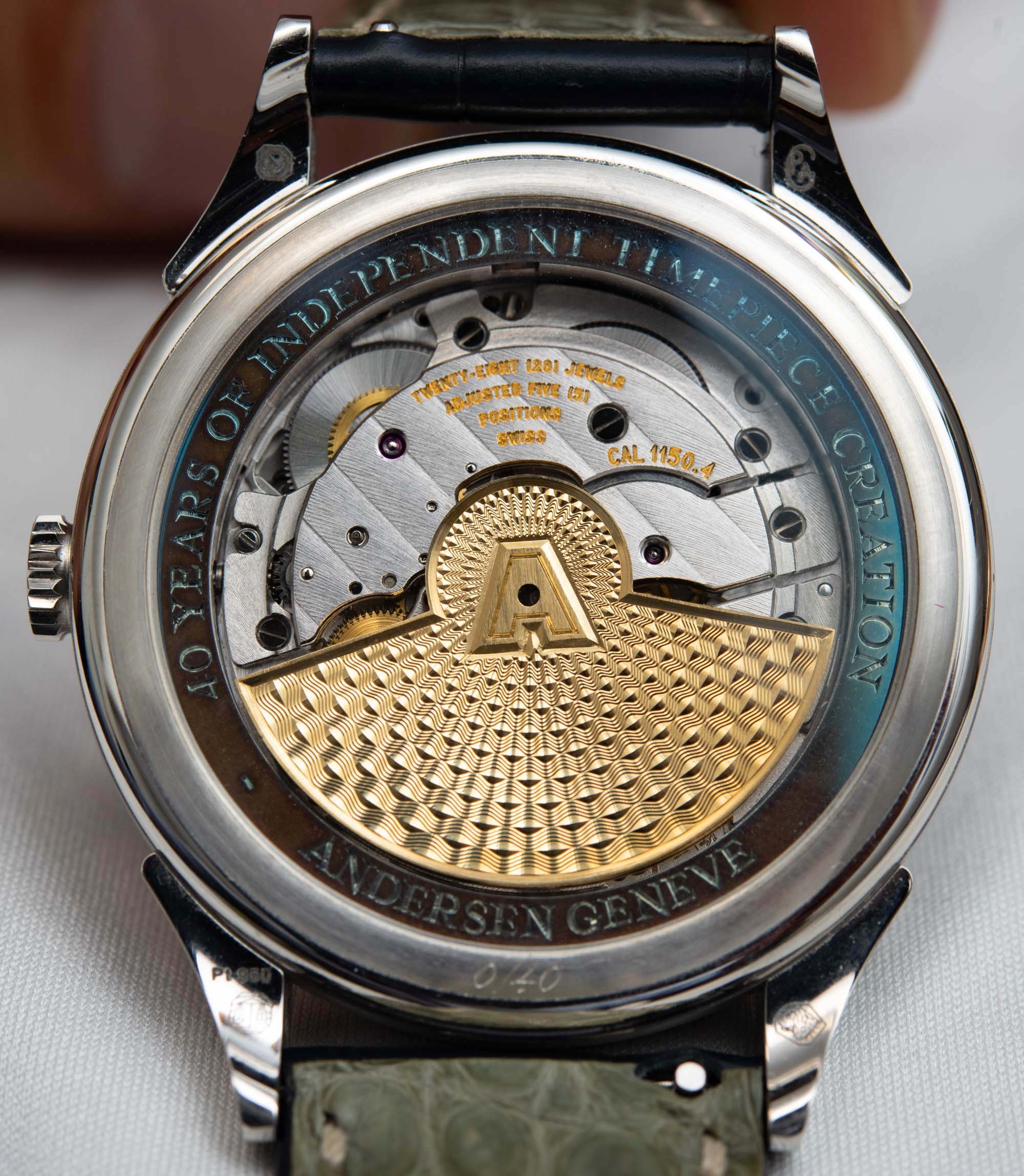 The caseback also features a BlueGold ring, also in 21k heat-blued gold, this time engraved fully by hand with the text “40 years of independent timepiece creation.” The movement is an honestly labeled Frédéric Piguet 11.50 with a jumping hours mechanism developed and manufactured at Andersen Geneve. The FP 11.50 has been used in a variety of luxury watches, perhaps most heavily relied upon by Blancpain. With its double-barrel construction, it is capable of reaching a power reserve of up to 100 hours, meaning that it has plenty of grunt – grunt that is used to power the jumping hours display (a power-hungry mechanism) for a still-impressive autonomy of 60 hours. The overall case thickness is 9.22mm, perfectly acceptable for a watch that has a self-winding movement in the back, two barrels in the center, and a jumping hour module on top, crowned by a relatively thick guilloché dial. As you’d expect, the solid 18k yellow gold self-winding rotor is also guilloché-decorated with a grain d’orge pattern and a hand-engraved “A” at the center. 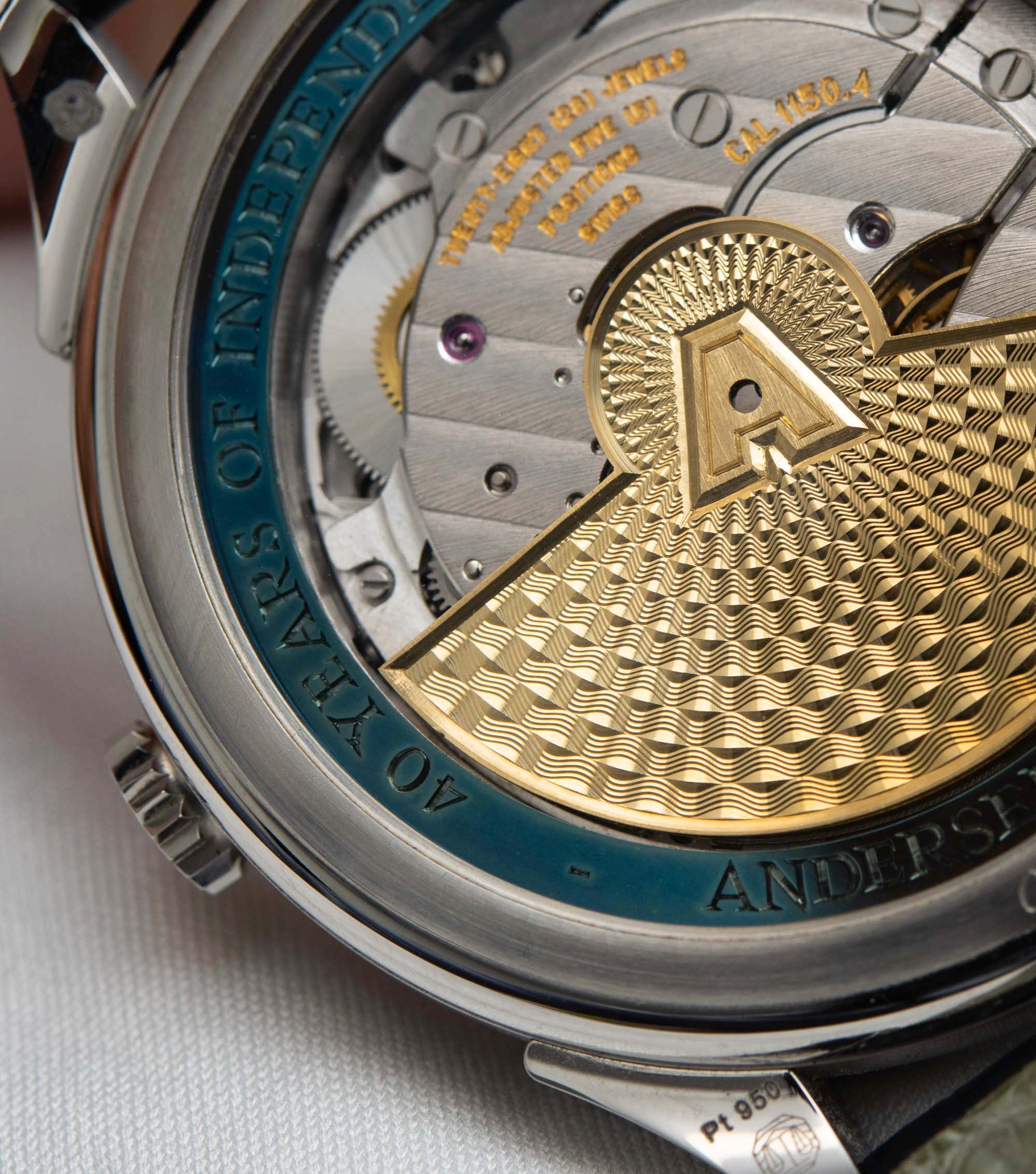 From front to back, the Andersen Geneve Jumping Hours 40th Anniversary is stunningly beautiful, not only because of its technical complexity or quality of execution but also because it radiates with what can only be attained through some 60 years of experience in the trade. And the fact that you can take a 10-minute walk down by Rhône and shake hands with the man himself — and his two-man team, a watchmaker, and his brand co-owner, Alex — just adds to the magic.