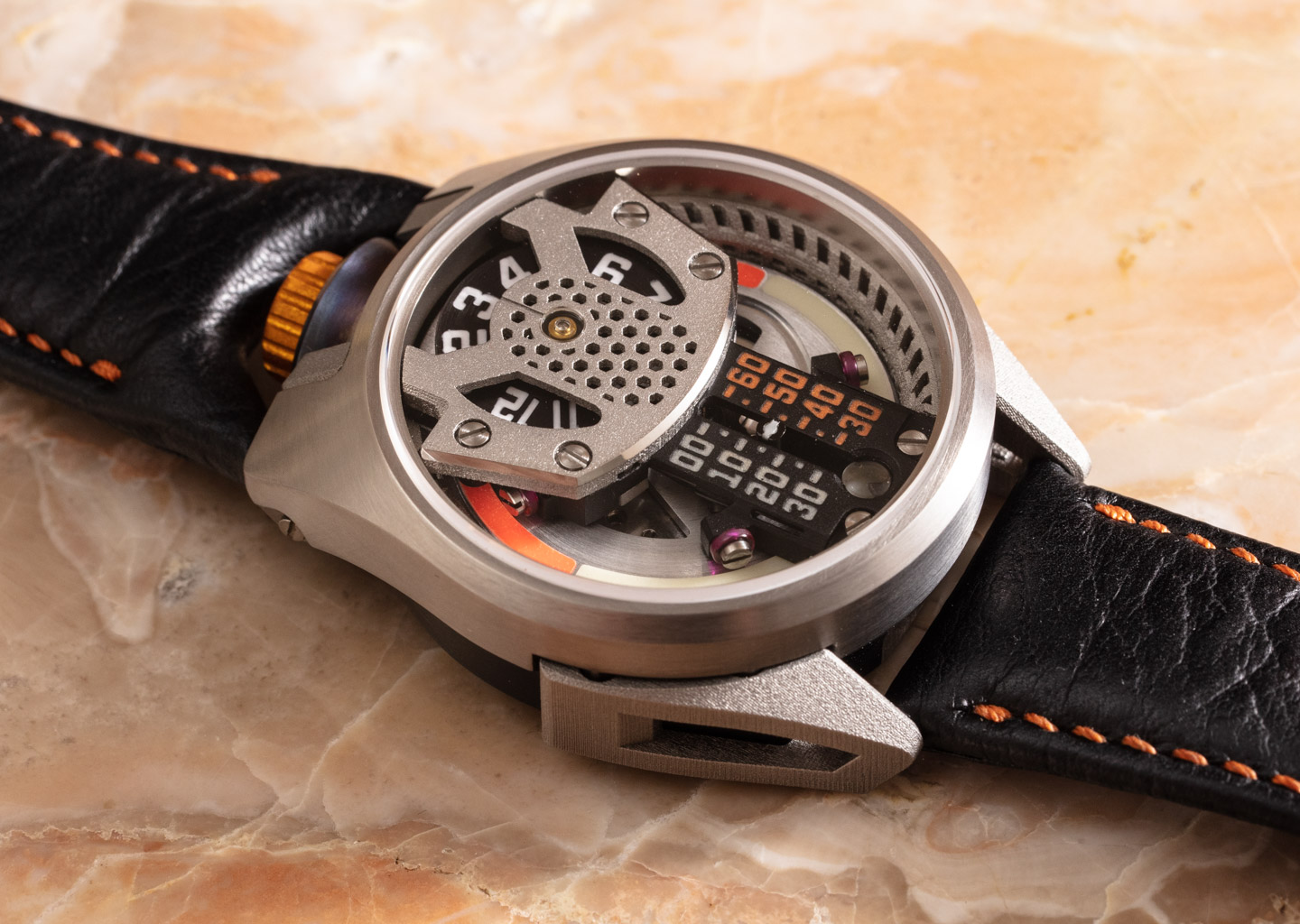 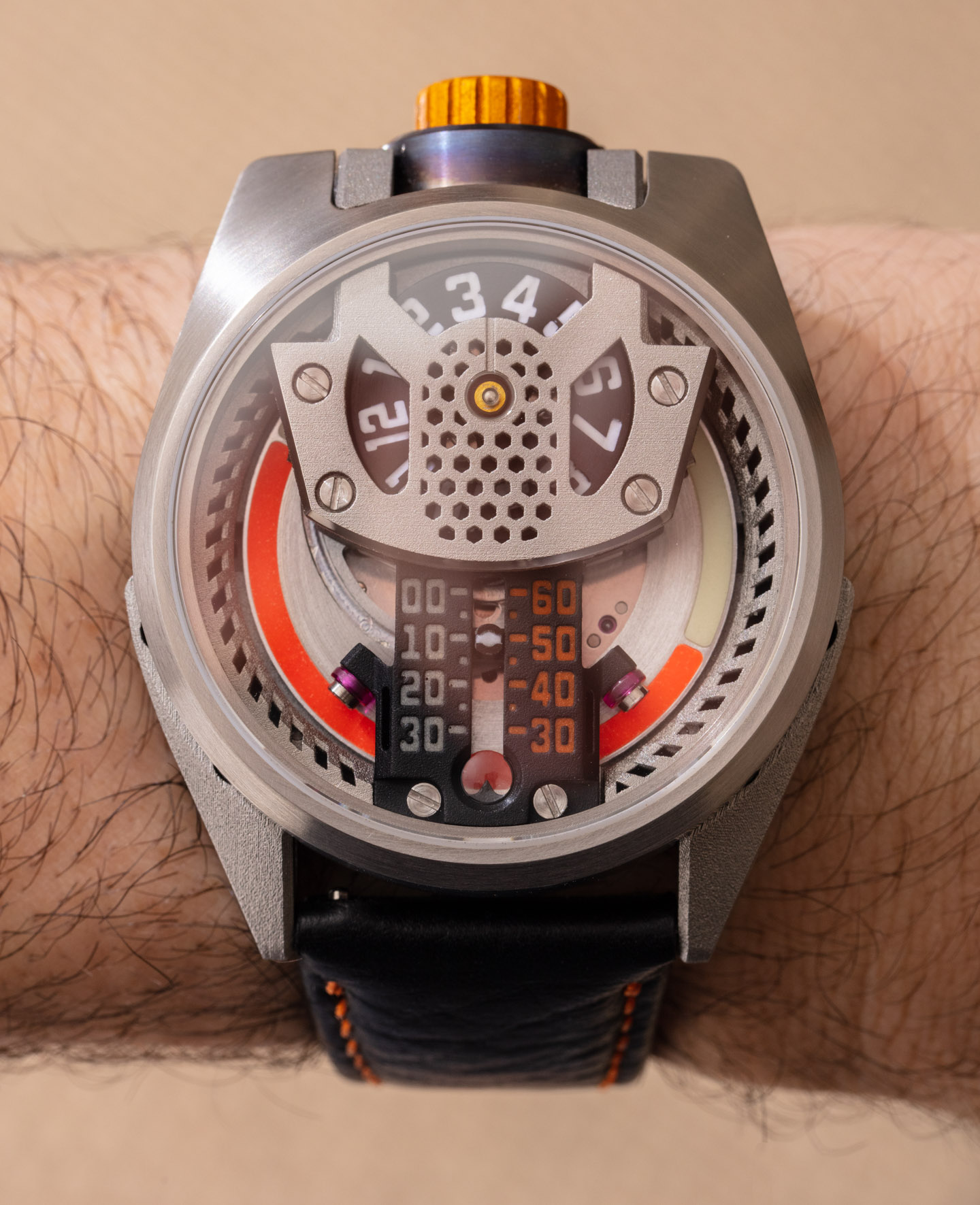 Watchmaker hobbyists/entrepreneurs are some of the most interesting people in today’s watch industry. These individuals come in a variety of forms, but they share a few things in common. For one thing, this group genuinely believes it can replicate the mechanical work and artisanship of major names in watchmaking — auto-didactically and in a relatively short time, according to them. These people also have a great penchant for tinkering with mechanical things and have typically impressive resourcefulness. Finally, this group of aspirational independent watchmakers all seems to have incredible patience — often putting years and years into making their ideas become a reality.

While many of these people fail at some point during their process, the best of them go on to do great things. Many of today’s best minds in watchmaking will probably result in discovering that they embody all of the above character traits. I first met Karel Bachand probably seven years ago now. While in school, he made a relatively competent “replica” of an URWERK watch with a working mechanism and using 3D printing. URWERK itself actually flew him out to Geneva just to meet him. 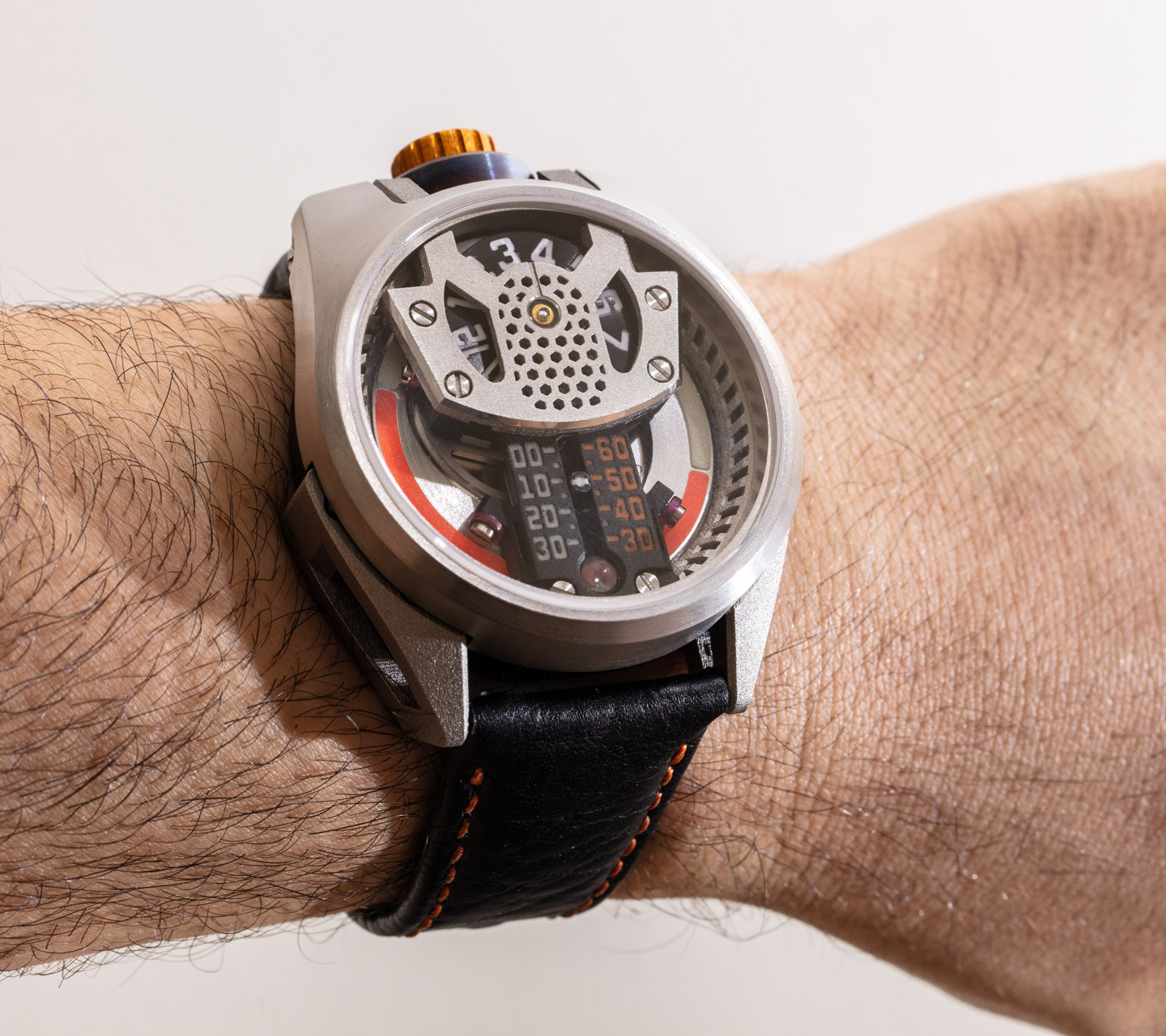 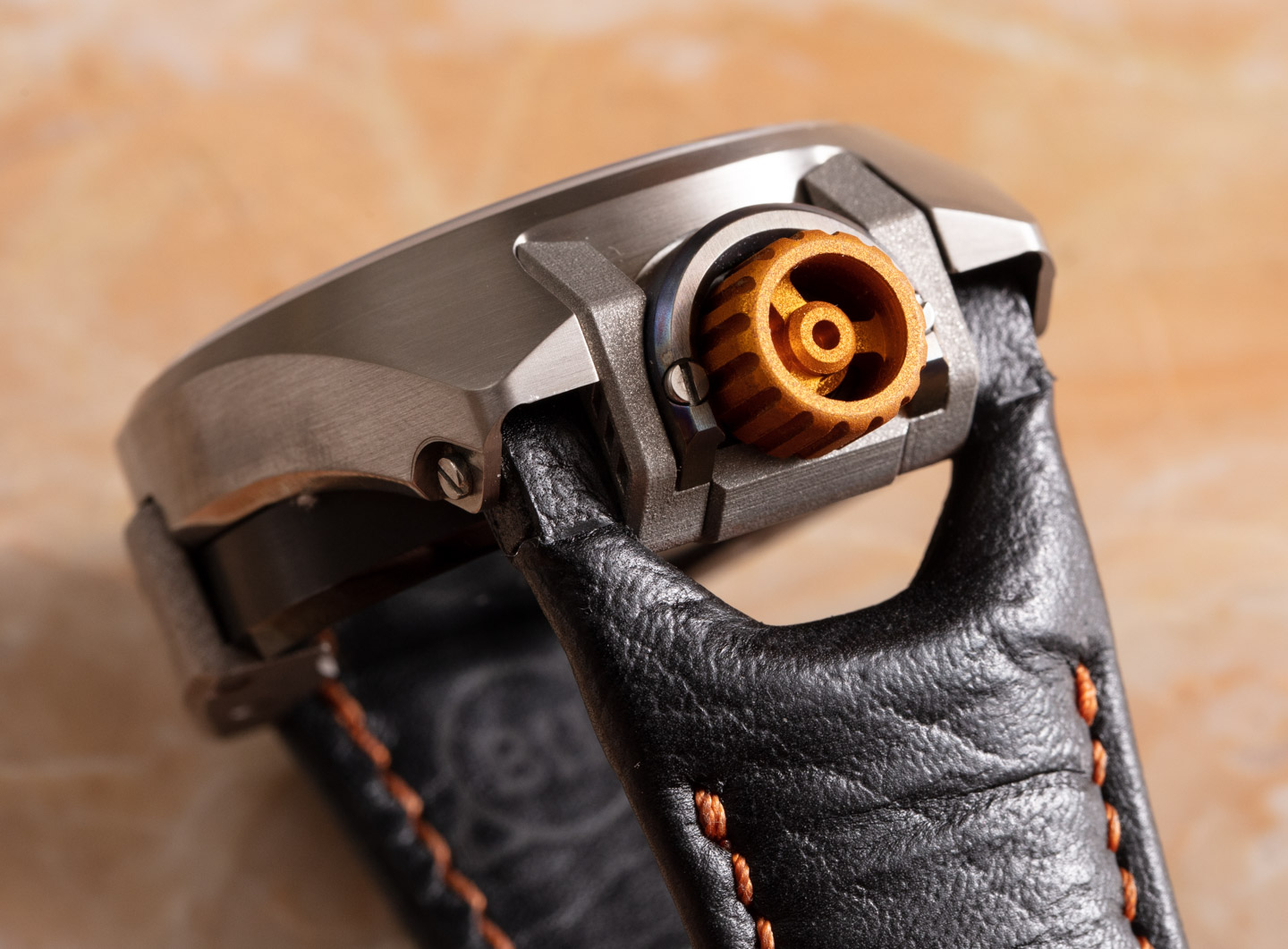 Karel later went on to start development on his own watch and brand — which he calls Barrelhand. The name is actually a creative way of combining his first and last name, which he came up with before the watch brand. The name sounded “horological enough,” and it stuck. Barrelhand got its brand debut on aBlogtoWatch back in 2017 when Karel finally had a working prototype of the Project 1. And now, in 2020, I am wearing what is more or less the final retail version that consumers should be able to buy soon. Readers should click on that last article to hear directly from Mr. Bachand how the Project 1’s movement works. 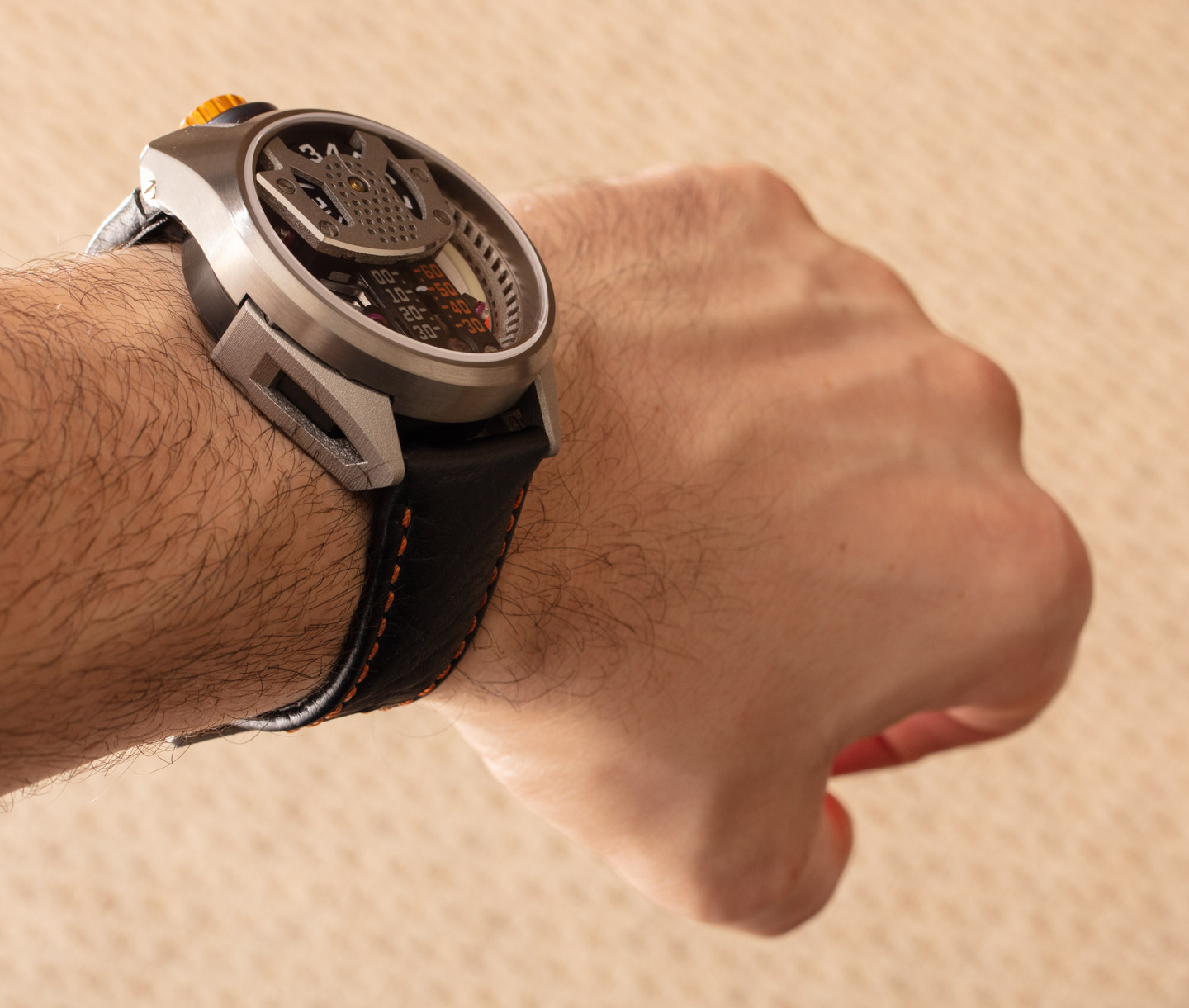 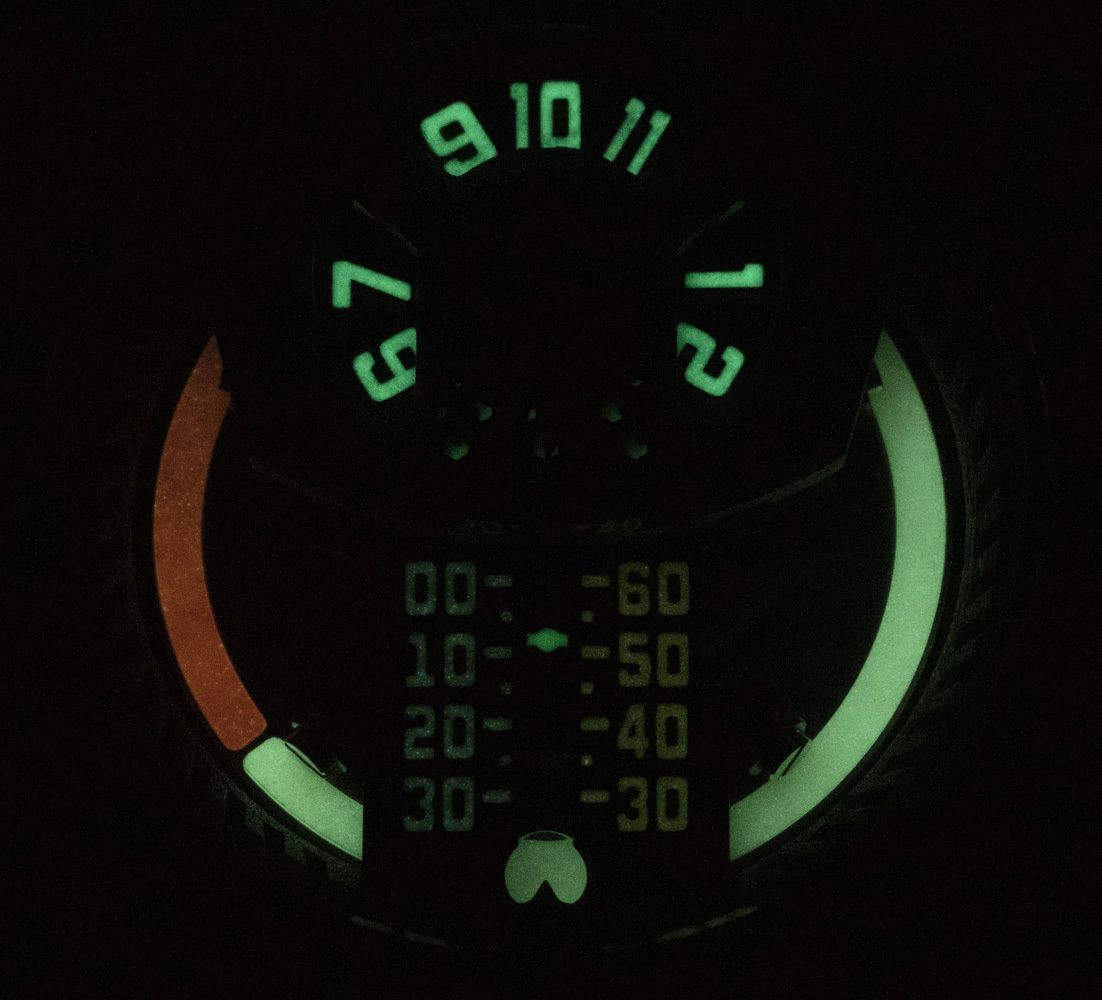 The Project 1 uses a base movement with a module on top for the dial, and the complications are all displayed using a bespoke system that Barrelhand has been refining for years. The base movement is a Swiss Made Eterna Caliber 3901M, which is a high-torque output manually wound mechanism operating at 4Hz with about 50 hours of power reserve. The movement is not only very robust, but the high torque was needed to power the time-indication module. What also makes the Project 1 watch interesting is that in its initial 20 pieces limited edition form, parts of the case and movement module are produced with 3D printed metal. Is this a big deal? Well, 3D printed metal is relatively new to watchmaking and valued because designers can render extremely complicated parts that would be extremely expensive or impossible to create out of single pieces using traditional machining and milling techniques. For that reason, a lot of watch designs would very much like 3D metal to be something which can new be relied upon for luxury timepiece creation. 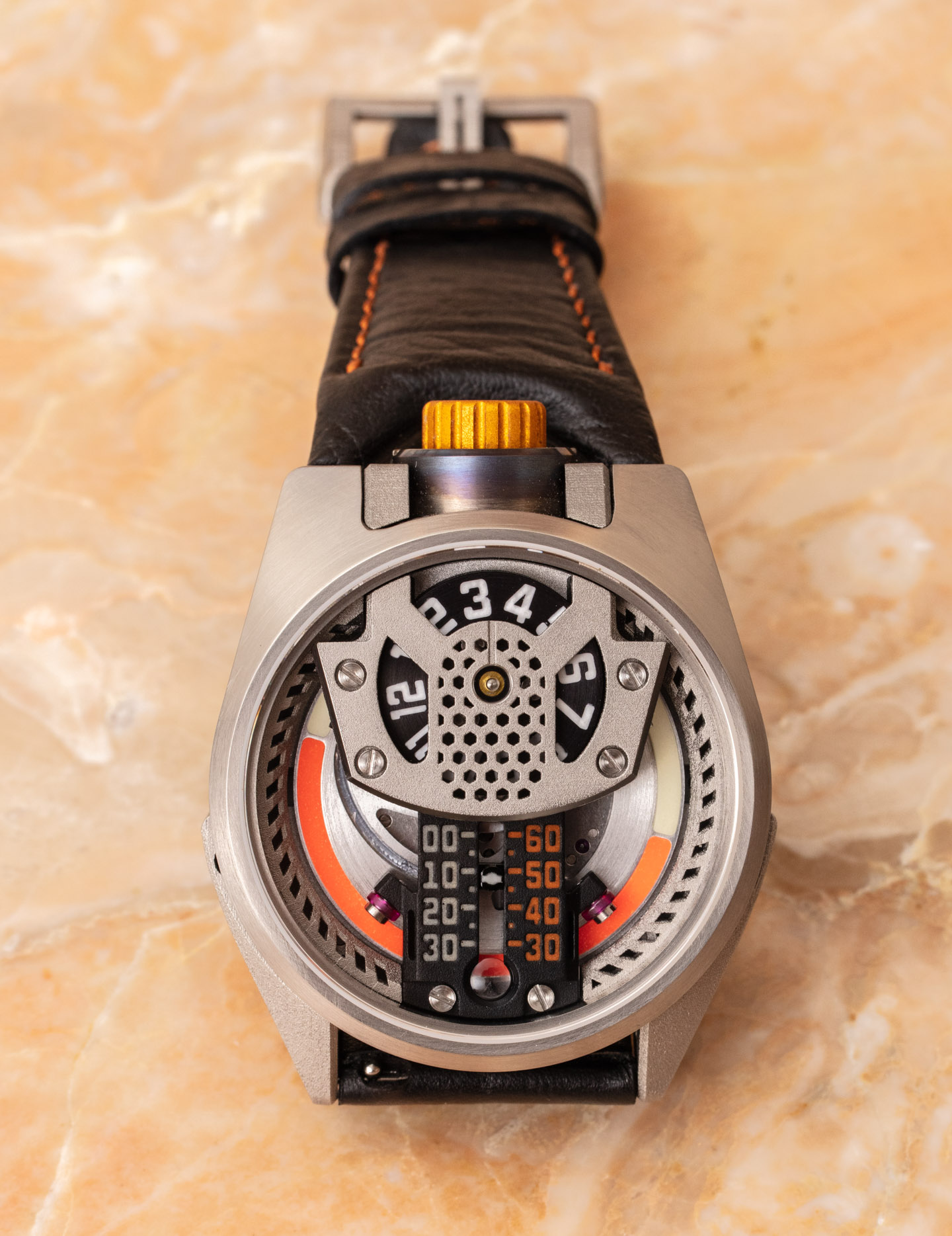 On the downside, 3D printed metal cannot be cut or created as precisely as machined metal. A big part of the luxury watch experience is the perfect edges on a metal case or the consistent polishing lines. 3D printed metal parts don’t have quite the crispness to them. It’s pretty good, but without additional machining, it doesn’t look as good as traditionally made metal parts. I believe that Barrelhand opted to go with both techniques here — 3D printing the metal, but also in some instances trying to apply hand-polishing onto the parts. Some of the more precise parts of the Project 1 use a 3D metal printing technique called binder jetting, which will probably find more use in the timepiece industry sooner than later. 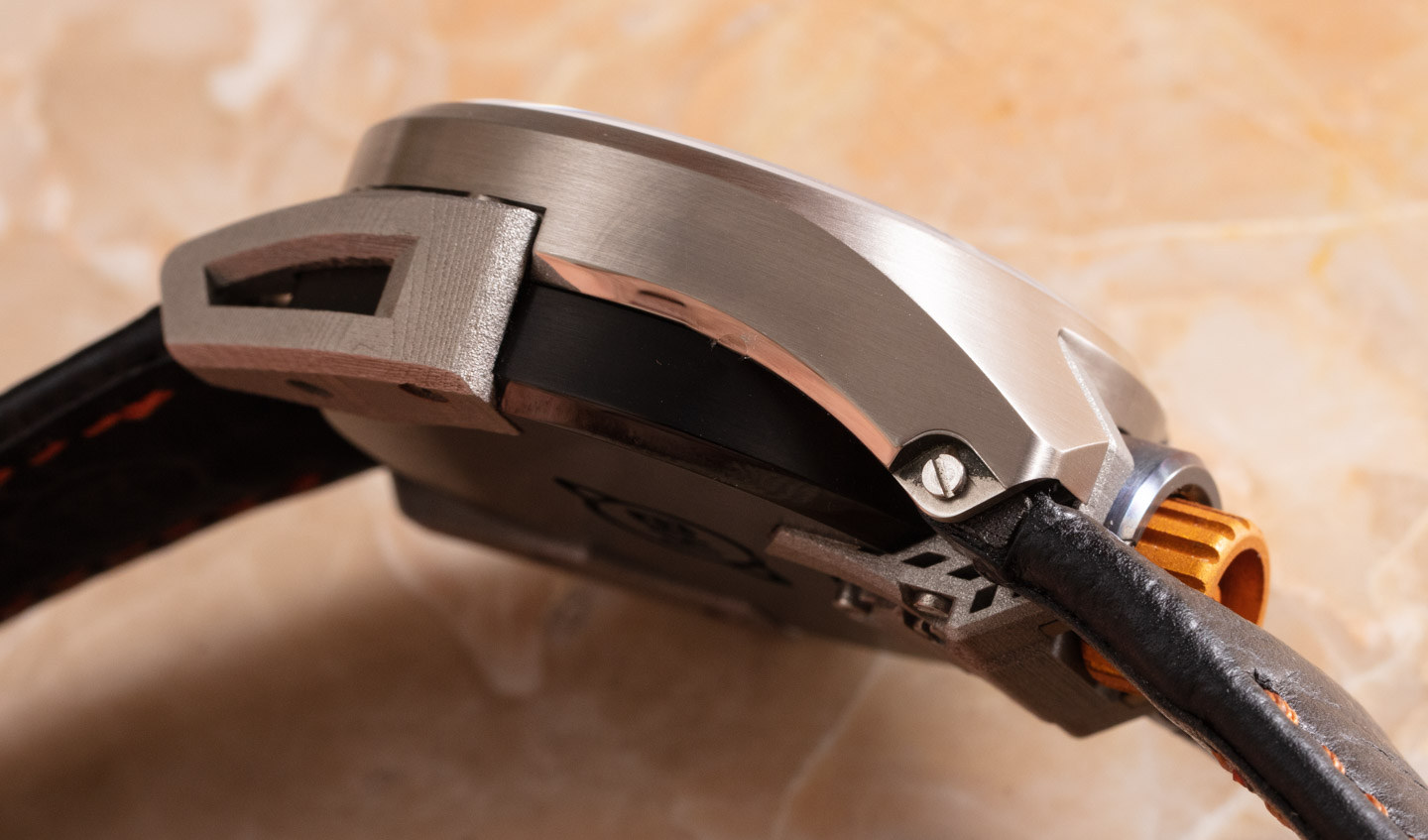 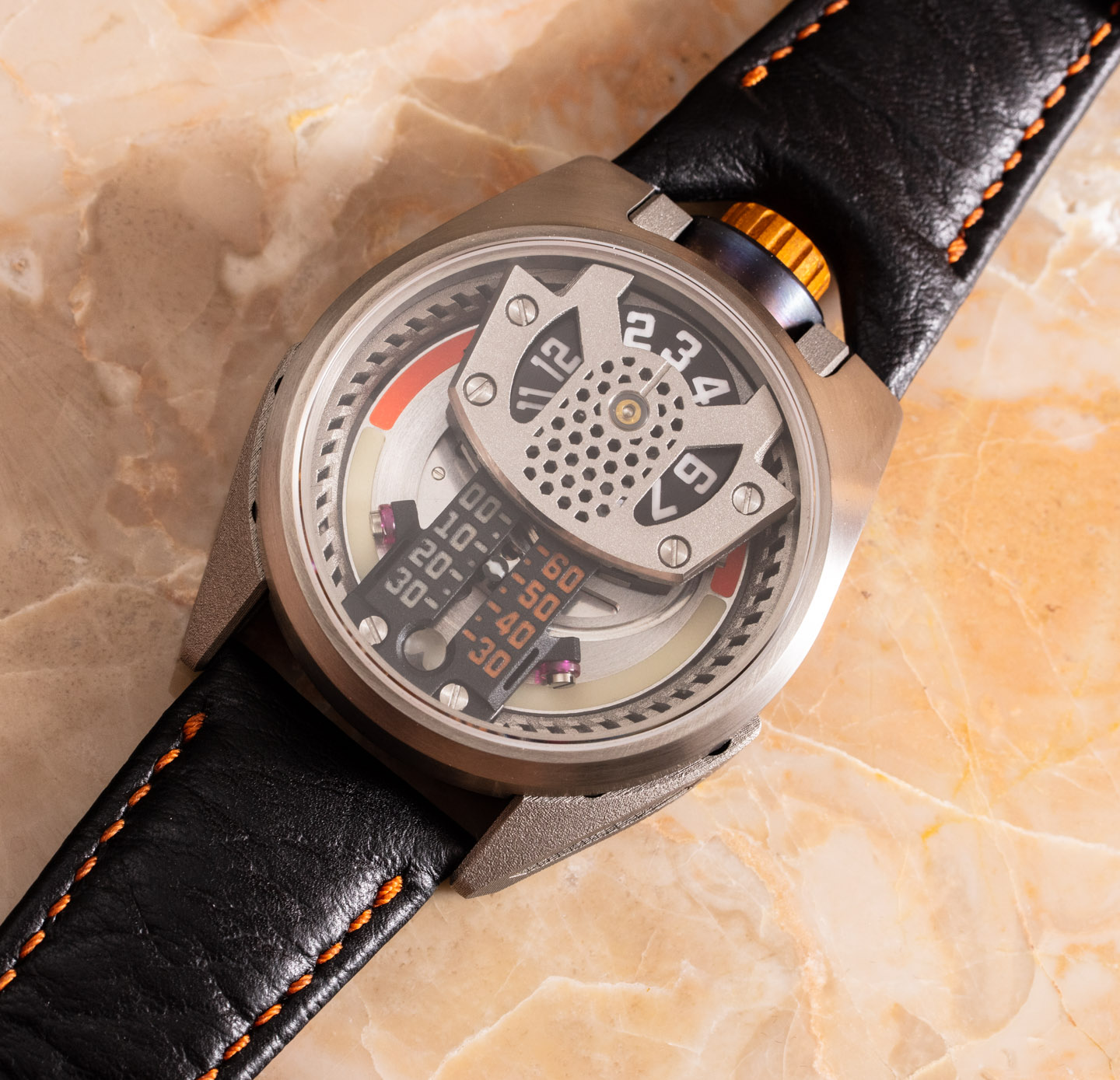 The case itself is CNC-machined (not 3D printed) and made from natural and DLC-coated titanium (with steel parts as well). It is about 44mm-wide at its widest point and about 53mm lug-to-lug (not including the crown). The watch is also about 15mm-thick. There is a small finger lever used to pop up the large crown, but it isn’t strictly necessary to use in order to pull out the crown in order to adjust the time. The Project 1 movement itself is a clever adaptation of some existing mechanical display principles put together in a very modern-looking watch that is thoroughly American. While the Barrelhand Project 1 is a timepiece that certainly borrows heavily from “Swiss know-h0w,” it was designed entirely in California and uses as many American-made parts as necessary. 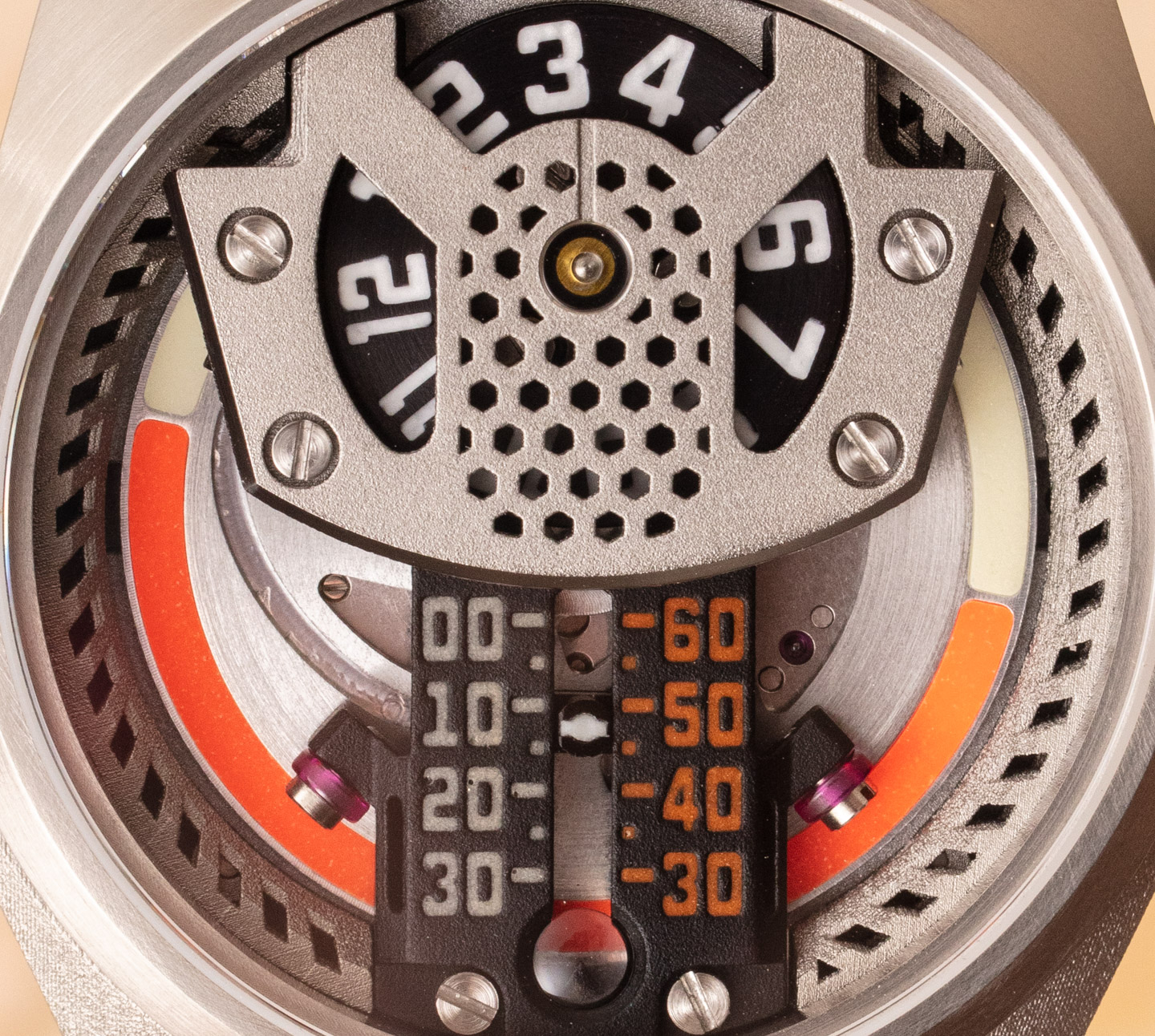 This was not an easy task. Ask Karel or people like him how available good suppliers are in American for watchmaking needs and few will have positive stories to tell you. While Switzerland has a relative dearth of companies that will make very detailed little fancy parts, companies in America either won’t do it because the volumes are too low, or simply aren’t set up to achieve watchmaking-grade finishings, textures, and tolerances.

The Project 1 movement is an automatic and has a deceptively simple display system. What I appreciate most are the elements Karel engineered in order to make the movement robust. That means not only being shock-resistant but also designed so that the parts wear minimally after many many repeated operations. For example, you can see the synthetic ruby rollers on the dial which help stabilize the ring, which moves right under much of the visible dial. 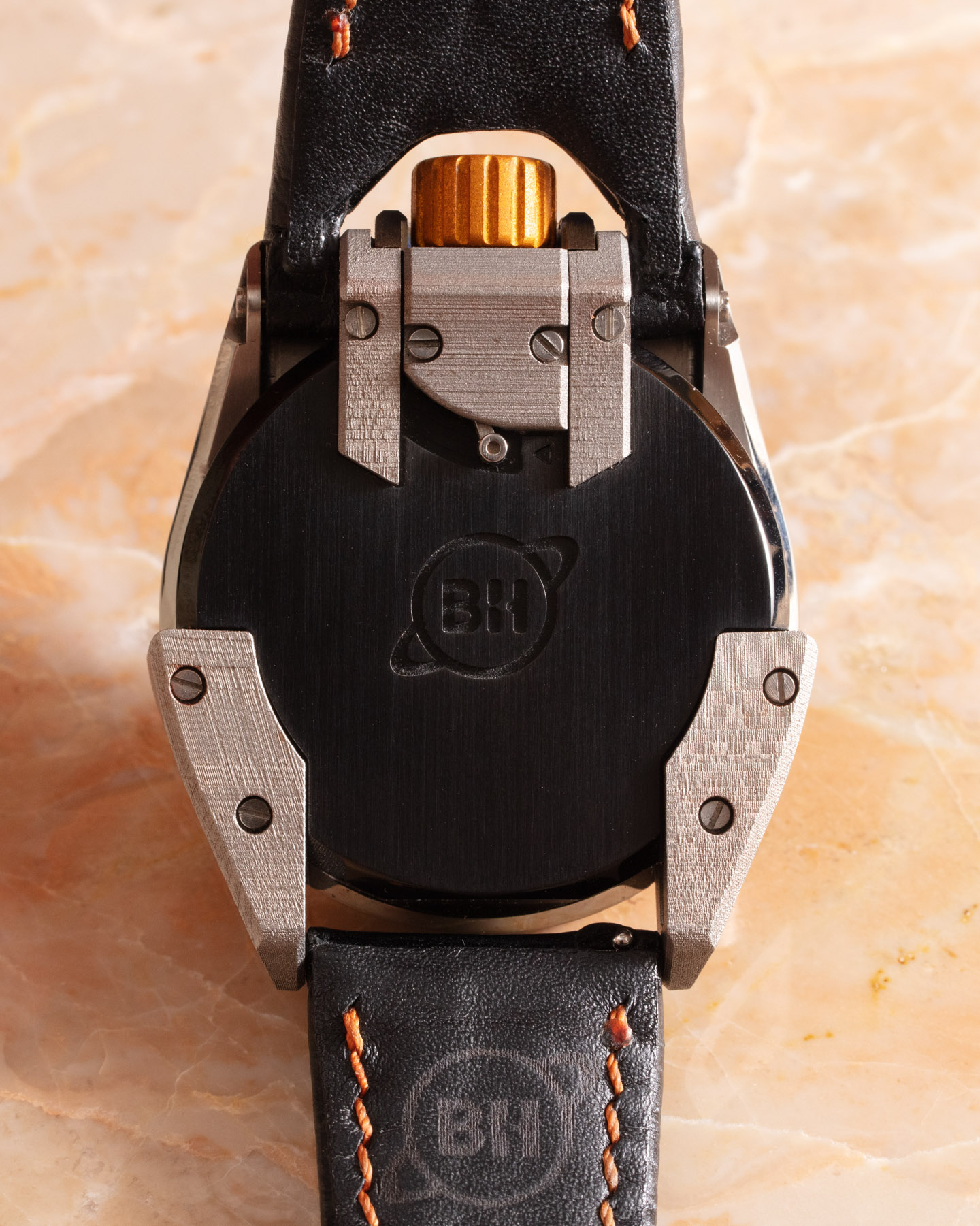 This ring has two functions. First, its outer periphery is fitted with a ForgeGlow lume-painted indicator which serves as an AM or PM indicator when viewed through the small magnifier located at the 6 o’clock position. Above this is the linear minutes hand which indicates half of the hour on the way up and the other half on the way down. The movement of this is operated by a sort of elliptical-shaped cam. Above all that is a jumping hour disc.

The Jumping hour discs might not be as smooth and springy a transition from one hour to another as in some high-end Swiss watches, but it was great for Barrelhand to engineer in this system because otherwise, the hour ring would have what is called “wandering hours,” and that means the current hour is never really in focus. Here it is, but the small line marker underneath the window meant to delineate to the eye where to read the current hour could benefit from being a bit more conspicuous.

While its operation is limited, I think that Karel did a very respectable job inventing a new movement, going through the trials and tribulations to actually make it work, and then resulted in a system where mechanical longevity and durability are really well-thought-out. 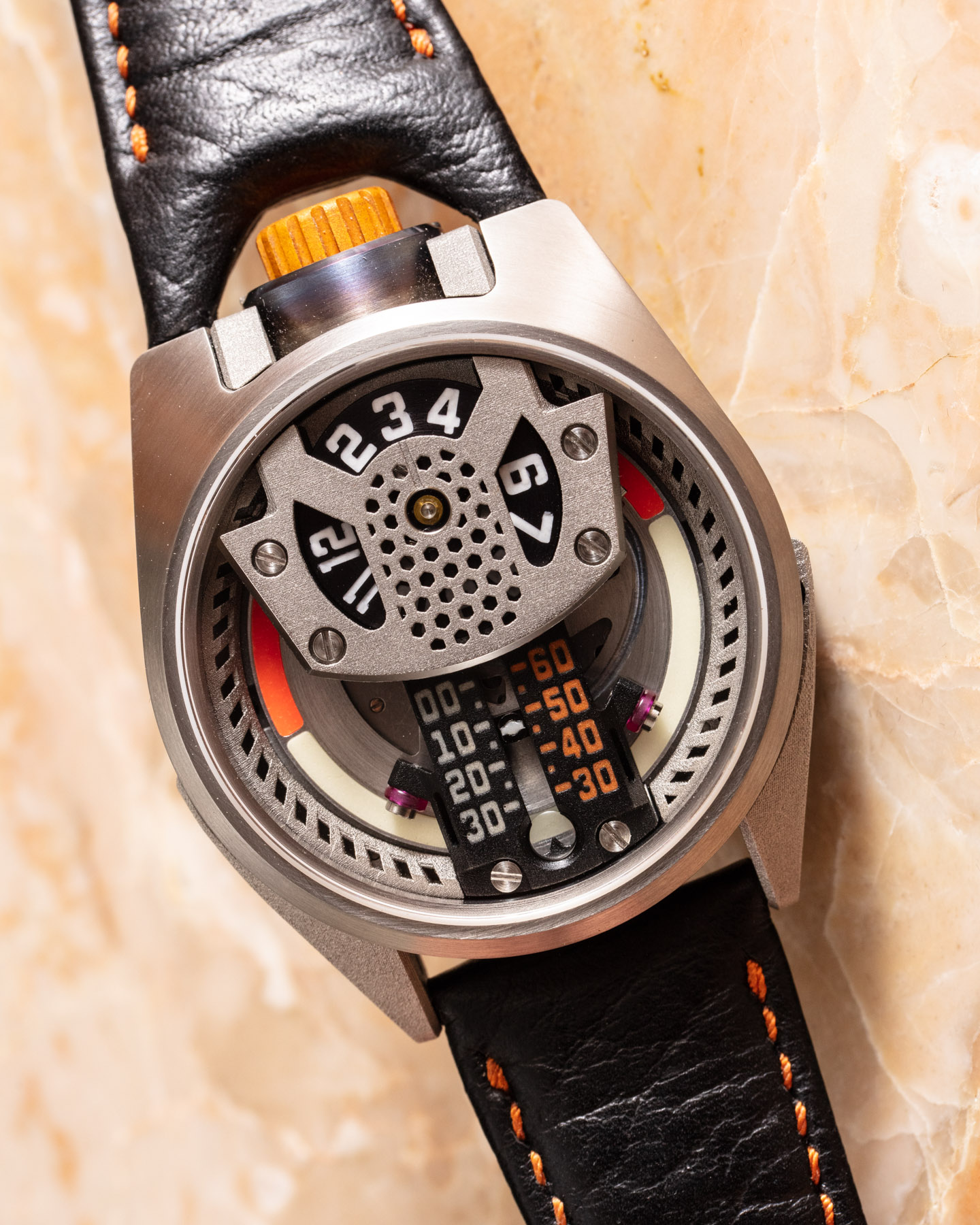 Legibility could be worse. I think the Project 1’s indicators are pretty easy to see and the fact that they are all richly painted in luminant helps. Where the system gets complicated is on reading the current minutes because your eyes need to look at the AM/PM indicator first, and only then will it be clear what the minutes are. Your brain then needs to go back to the hours and consult the hour marker window. From there your brain needs to reserve the numbers in your mind (because you were thinking minutes and then hours) in order to determine the current time. Barrelhand’s mission was to create a new way of reading the time (curiously, this is a very common and shared mission by people who think like Karel), and in doing that he succeeded. It is extremely difficult to design a dial which is easier (or faster for that matter) to read than a traditional two-hand dial (unless you are talking about a digital dial). 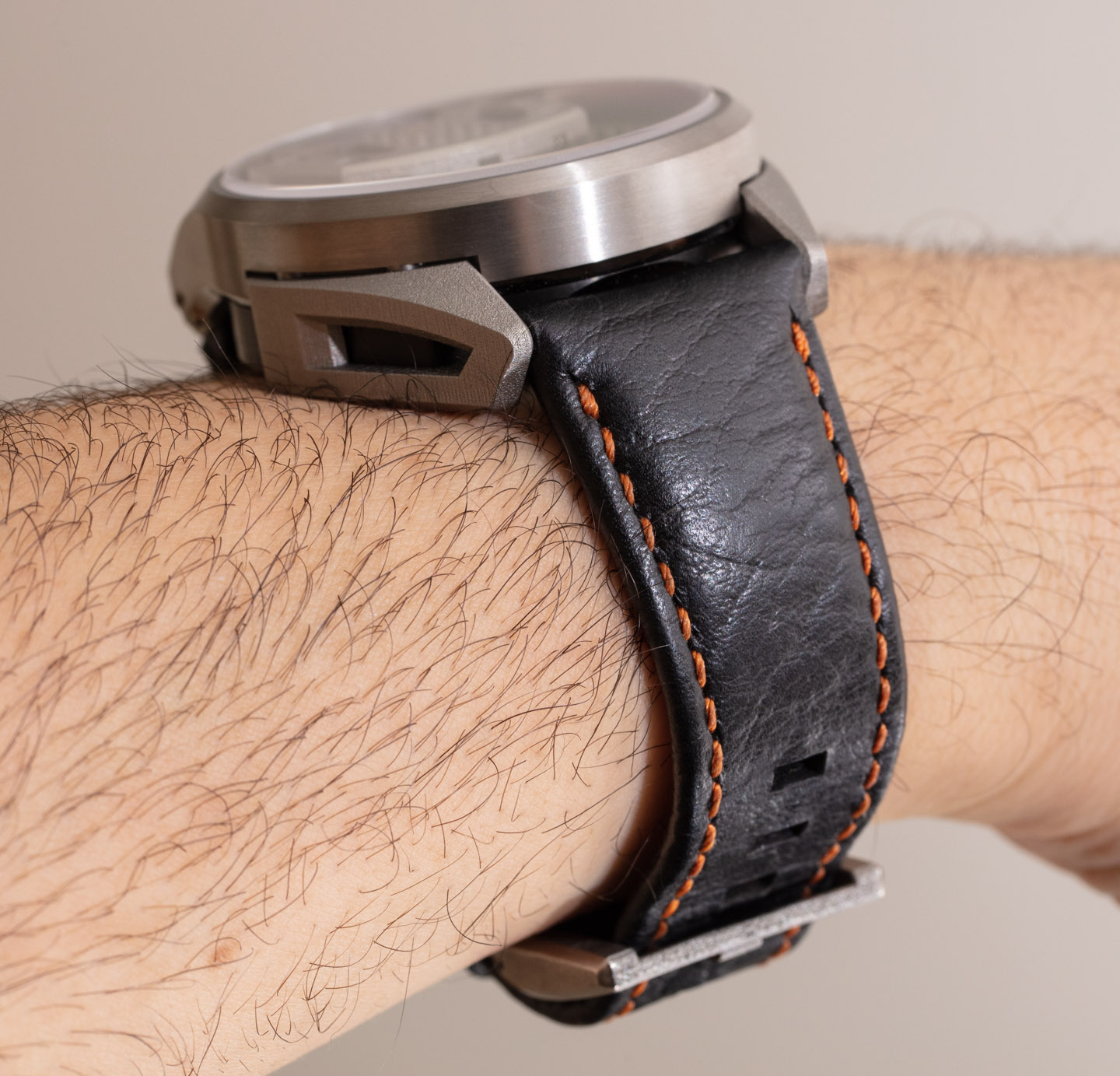 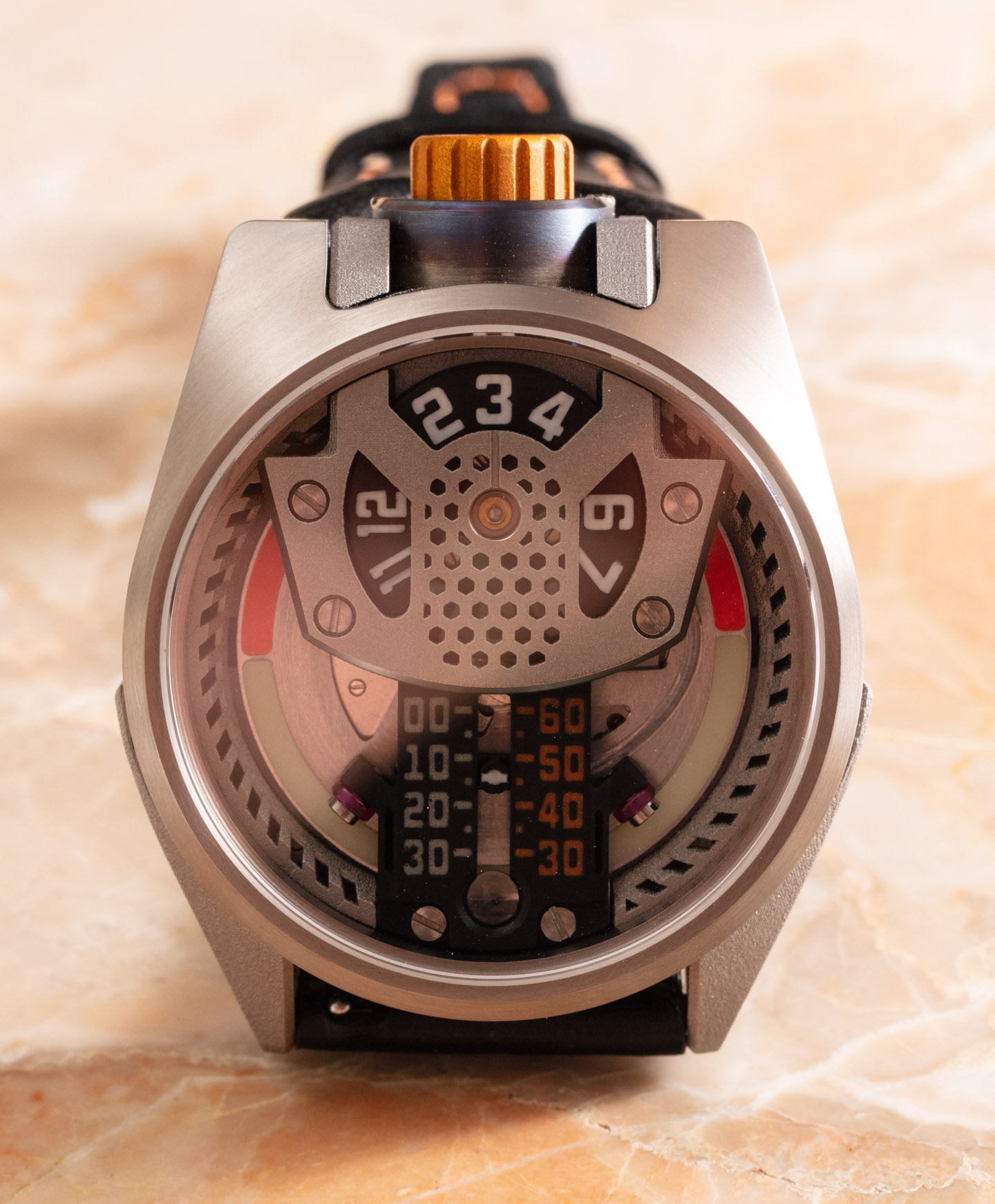 On the wrist, the Project 1 has a neat, spaceship-like design to it. Attached to the case is a hand-stitched American Bison leather strap.  The Project 1 watch isn’t going to win any beauty contests, but it does feel like a genuinely interesting and design-centric machine. Barrelhand gets high marks for originality, execution, and mechanical sophistication. If the watch consumer gives Mr. Bachand’s work a chance, then not only will they appreciate what the Barrelhand Project 1 timepiece has achieved, but I think a mind like this could easily go on to do many more of the types of things that inspire the fantasies of watch lovers. Price for a limited edition of 20 pieces Barrelhand Project 1 watch is $30,000 USD. Learn more at the Barrelhand website here.