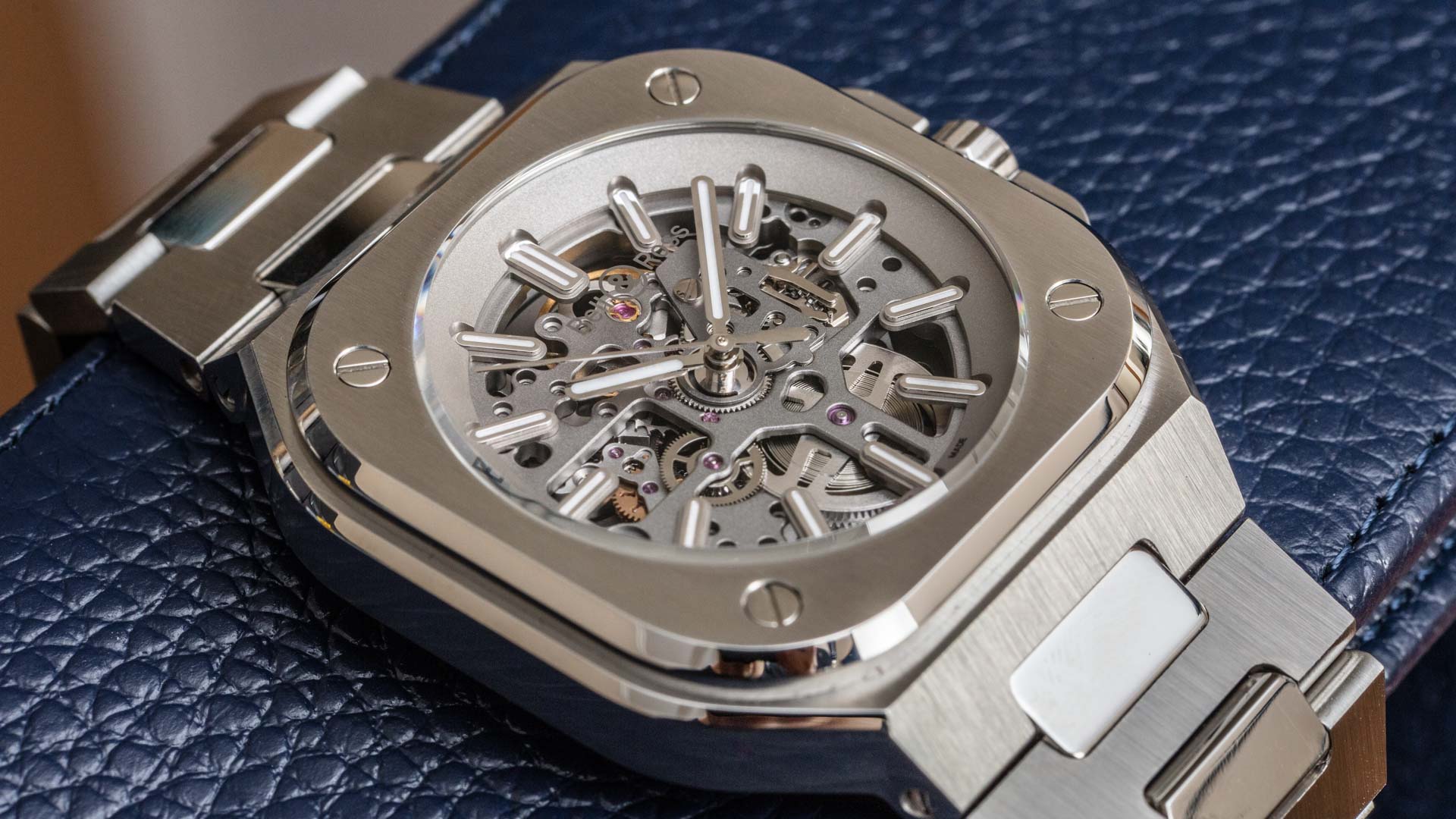 The biggest news from Bell & Ross for 2019 is the introduction of the Bell & Ross BR 05 collection that aBlogtoWatch debuted here. The BR 05 is the first major new timepiece collection that Bell & Ross has introduced for some time, and it is the first product whose design is directly influenced by watches Bell & Ross has produced in the past. Several versions of the BR 05 watch are being made available at launch, with this BR 05 Skeleton (ref. BR05A-GR-SK-ST/SST) being the model Bell & Ross feels will have the most appeal to watch collectors and enthusiasts. I tend to agree with them.

I said to Bell & Ross something I still stand by today when they first shared the full BR 05 collection with the aBlogtoWatch team prior to its launch: “It is going to take collectors a few years to really get into these.” You see, the problem is what I call “Nautilus shock.” When an experienced watch collector sees the BR 05, the first thing that probably comes to mind is, “Bell & Ross just built its version of a Patek Philippe Nautilus.” From an aesthetic perspective, that is absolutely right. Forget, for a moment, that a steel Nautilus is many times more expensive than a steel BR 05; Bell & Ross seems to have built its own version of something hard to get and popular on the market.

So that is what watch fans need to get over, the seemingly direct “I also want to have a product in this category” approach by Bell & Ross that, in some ways, is not particularly original. Some might say that it is brazenly unoriginal in an industry celebrated for “innovation.” I’m well aware of the appearance that Bell & Ross copied something, but the more I think about it, the less I feel upset by it. Yes, Bell & Ross was clearly inspired by the Patek Philippe Nautilus and wanted to throw its hat into the ring. Is there something wrong with that?

Gerald Genta designed the Nautilus for Patek Philippe in the 1970s. Since then, there have been years of watches like and unlike it. Today, the Nautilus is the world’s hardest-to-get overpriced steel watch. People are paying too much for it and agonizing over not being able to get it — this is the clearest sign to a company in the watch space to make a product to help satisfy demand. What the Nautilus really represents is people’s interest in buying bracelet-style watches in steel that have a distinct design and can be worn casually or formally. This is what Bell & Ross is trying to make a product for; they aren’t really trying to replicate the particular personality of the Nautilus. 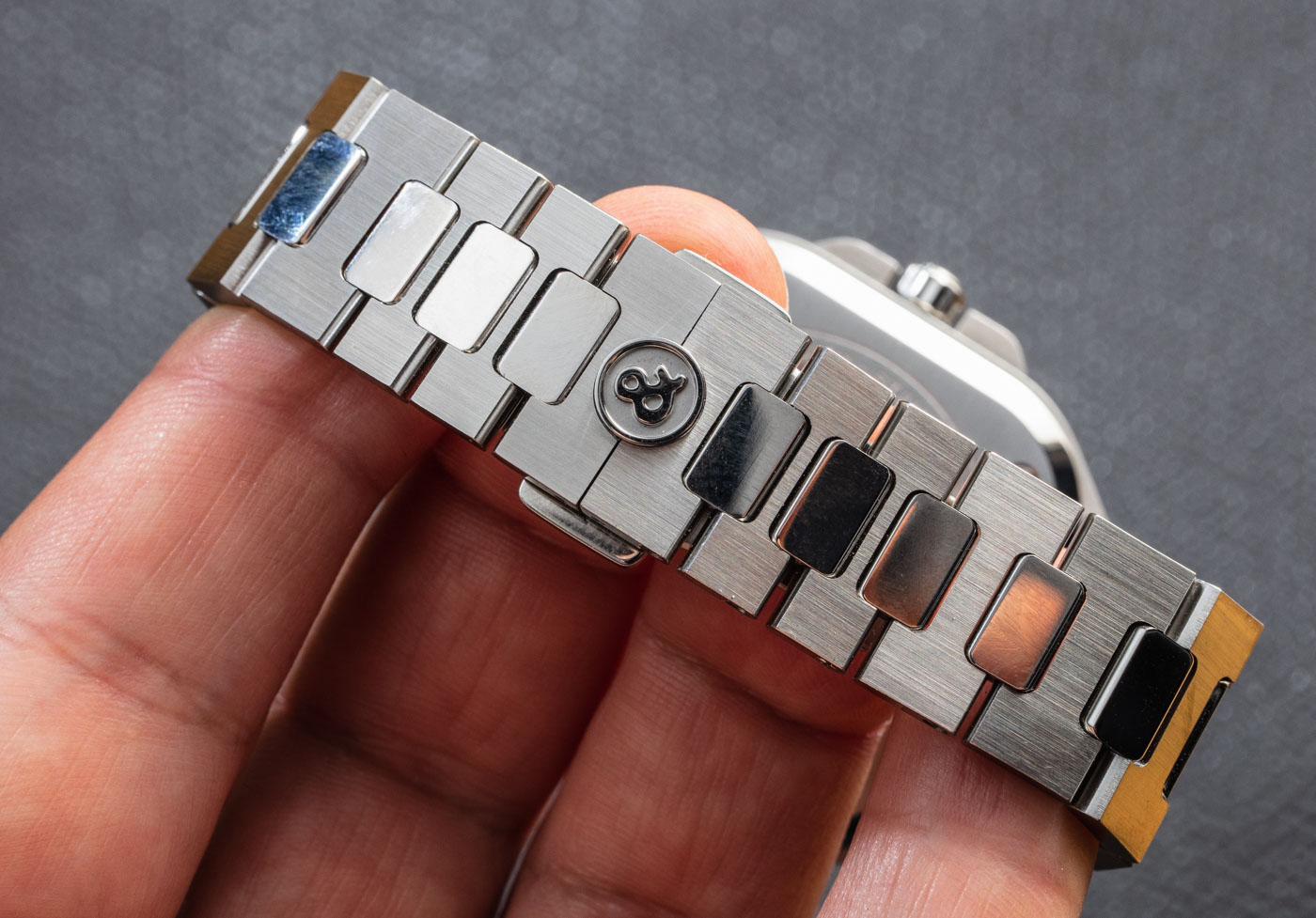 Design-wise, the comfortable and nicely made BR 05 has a tapering bracelet, links, some case design elements, and hands that are reminiscent of the Nautilus. I would actually say that the designs are more generally Gerald Genta-inspired, but to some people that might be splitting hairs. Bell & Ross (who designs all of its products in-house) seems to have said to themselves, what if we put our DNA and Gerald Genta DNA into some combiner machine (like in The Fly) and imagine a nice result. That result is the BR 05.

From the BR 01/BR 03-inspired case shape to the aesthetic of the links, which hearken back to when Sinn was producing Bell & Ross products — most all angles of the BR 05 are related to Bell & Ross even if, at a glance, they are designed to remind wearers of something else. The case is 40mm-wide (so is the Nautilus), about 10.3mm-thick, and with a just under 48mm lug-to-lug distance. With 100 meters of water resistance in a nice little package, the BR 05 is really very comfortable on the wrist and has a ton of personality. Bell & Ross lovers will see things they have seen before, and everyone else not familiar with the brand does, indeed, get a nice new bracelet watch with this product collection. 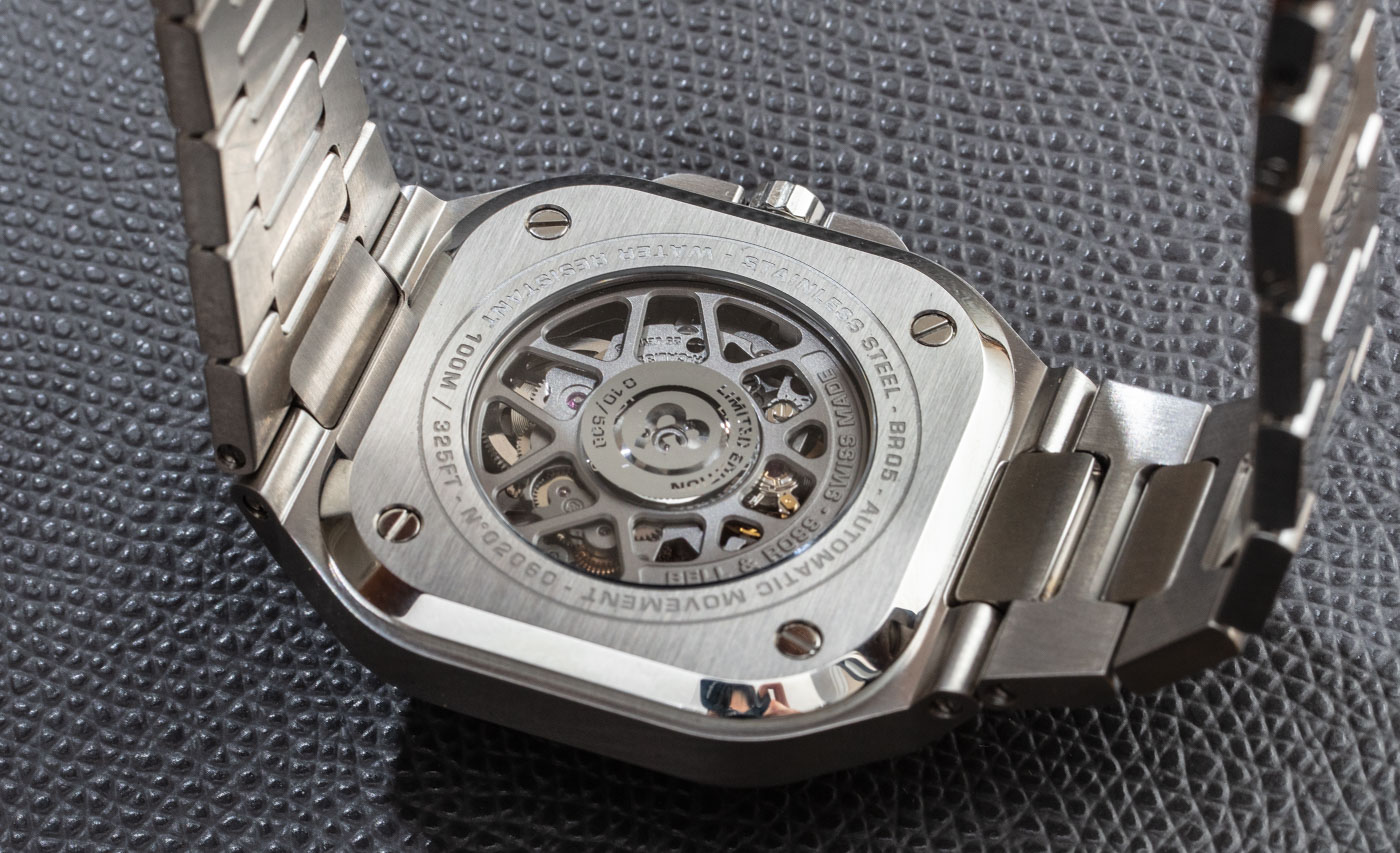 The Skeleton version of the BR 05 adds a level of trendy horological passion to the product collection. Bell & Ross worked carefully in collaboration with Swiss Sellita to produce an exclusive movement and automatic rotor. The rotor is shaped like a wheel and fully covers the movement with a “mystery” weight to provide for the oscillation. The BR 05 isn’t an automotive watch, but so much of Bell & Ross product DNA is about cars and racing that it made sense. Remember that unlike other “instrument” watches made by Bell & Ross, the BR 05 doesn’t have a functional theme. Rather, it has a design/artistic theme that has, in many ways, manifested itself as being a Bell & Ross product that celebrated Bell & Ross.

The movement skeletonization that Sellita and Bell & Ross came up with together is attractive because you get the sensation of a tastefully skeletonized movement structure without having to stare at your wrist hair too much. The matte surfaces of the movement feel a bit unfinished, but they do offer an industrial look and contrast with polished elements on the dial, such as the hands, hour markers, and components in the movement itself. Bell & Ross designed at least this gray/steel tone BR 05 Skeleton dial so that the case, bezel, flange, and dial elements are similar colors, allowing for a tightly integrated look. This isn’t to everyone’s taste, but it does make for a nice aesthetic when it isn’t clear where the movement/dial/case begins and ends. 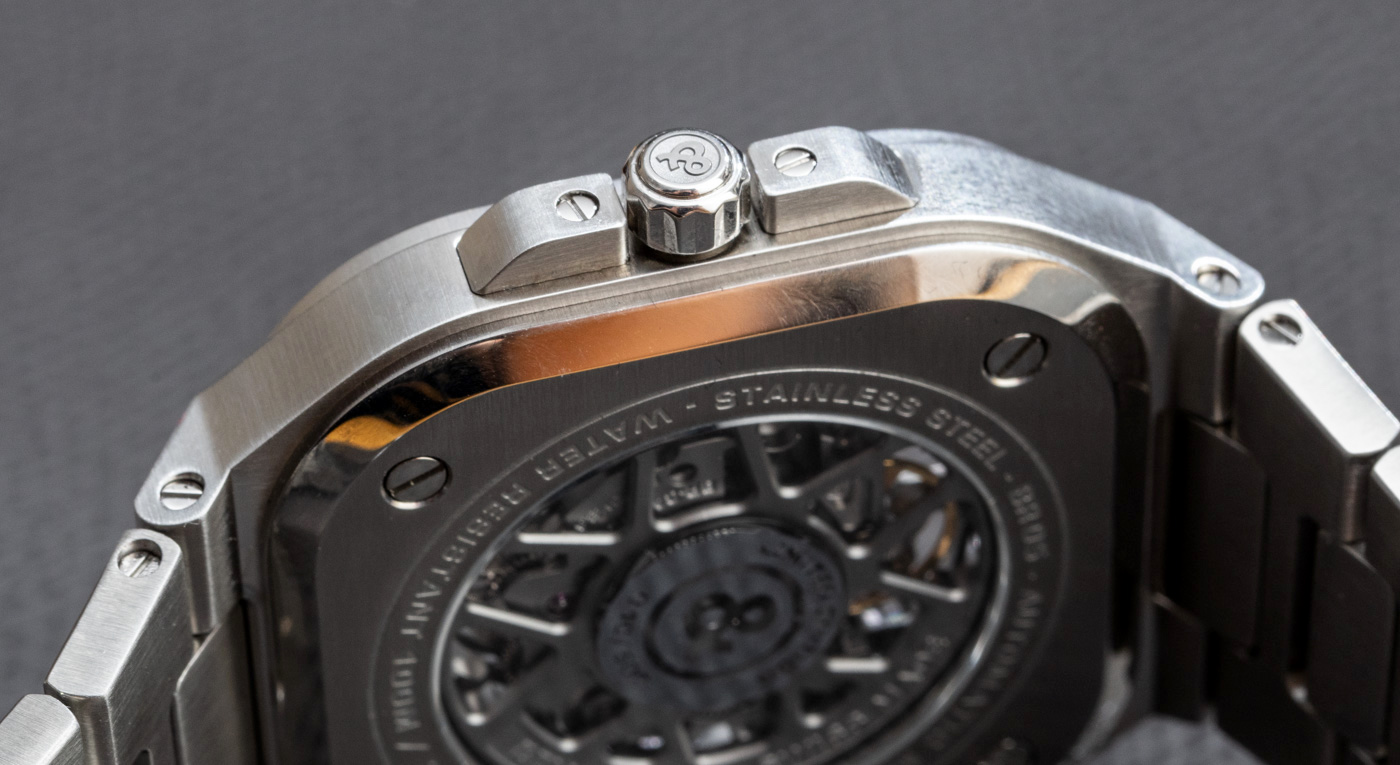 The exclusive automatic movement for the BR 05 Skeleton is known as the BR-CAL.322, and it operates at 4Hz with about two days of power reserve. I like how the mainspring barrel is skeletonized, which offers a sort of crude power-reserve indicator because you can see how tightly wound the spring inside is. Dial legibility is maintained because of large lume-painted hands and hour markers. In this regard, the BR05 Skeleton is distinctive from many other skeletonized watches, in that you can read the dial easily.

As a daily-wear with some enhanced horological appeal, the BR 05 Skeleton is a pretty decent choice. It has broad fashion appeal, is well made, has a distinctive look, and the price is fair. Watch collectors will have “Nautilus Shock” over the larger BR 05 collection at first (this is almost guaranteed). It will, however, wear off and collectors will realize that the world probably needs more Nautilus watches, and Bell & Ross has just as much right as anyone else to throw its hat into the ring. The many little details of the BR 05 is what will help it stand the test of time, and this BR 05 Skeleton is the most fun way to enter the new collection for people who are traditionally into mechanical watches, given the open-worked dial. Bell & Ross makes the BR 05 Skeleton watch in steel available on either a rubber strap or on this matching steel bracelet. Price for the Bell & Ross BR 05 Skeleton is $5,900 USD on a strap (BR05A-GR-SK-ST/SRB), and $6,400 USD on a bracelet (BR05A-GR-SK-ST/SST). See more at the Bell & Ross website here.