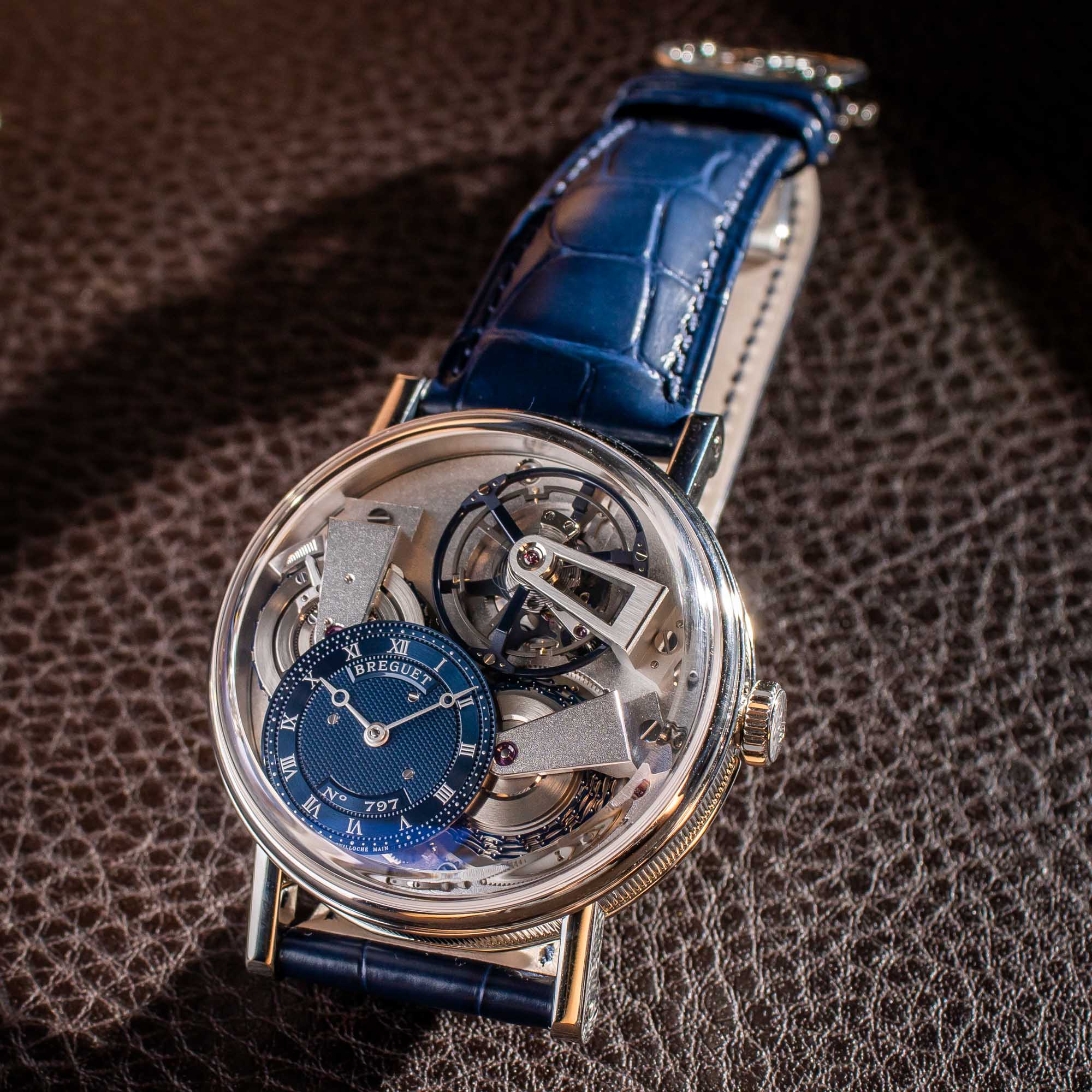 The name Breguet is scattered throughout the world of watchmaking (Breguet numerals, Breguet-style hands, Breguet overcoil, etc.), yet the modern Breguet brand doesn’t receive quite as much mainstream attention as one might expect. To be fair, a similar statement applies to many of the more expensive Swatch Group brands that have to share the spotlight with Omega, although for those who are looking for high complications and beautiful finishing, Breguet makes some truly gorgeous timepieces. Originally introduced in 2005, the Breguet Tradition collection consists of models that pay tribute to the brand’s rich history and innovations, and the reference 7047 represents an ultra-complex execution of what is essentially a manually wound, time-only watch that features a one-minute tourbillon with a chain and fusée transmission mechanism. While the Breguet Tradition 7047 itself has been around for a number of years now, the latest rendition of the model for 2022 (ref. 7047PT/1Y/9ZU) is arguably the best-looking one yet, and it pairs a solid platinum case with rhodium-plated bridges and crisp blue accents that highlight its two centerpiece complications. 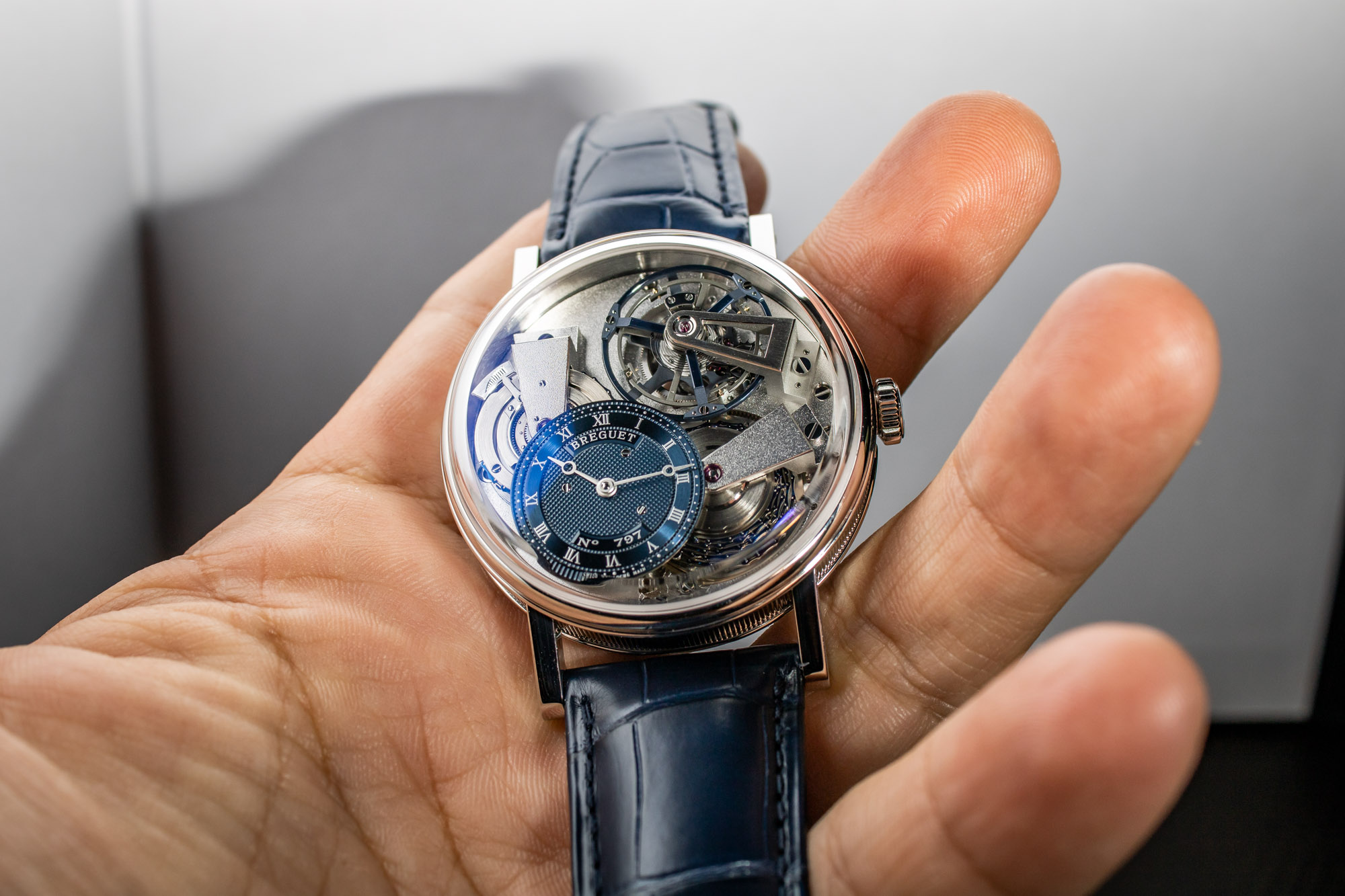 Crafted from 950 platinum, the case of the Breguet Tradition 7047 Fusée-Chain Tourbillon watch features a circular profile that measures 41mm in diameter by 16mm thick. Although these on-paper dimensions undeniably seem rather chunky, it’s important to note that some of that thickness is due to the heavily domed sapphire crystal that sits on top of the case and protrudes above the thin smooth bezel in a bubble-like fashion. The platinum case itself receives an entirely high-polished finish, and the sides are adorned by a fluted case band that is emblematic of a number of Breguet’s classic designs. A signed and fluted crown at 3 o’clock offers access to the manual-wind movement, while a large sapphire display caseback offers an unobstructed view into the reverse side of the watch, while also providing it with 30 meters of water resistance. In terms of its overall design and proportions, the platinum case of the latest Breguet Tradition 7047 Fusée-Chain Tourbillon is identical to the other versions of the reference 7047, and this is now even the second iteration of the model to feature a case made from platinum. That said, while the previous platinum version offers a largely monochromatic gray appearance, the latest version features brighter white-metal tones and contrasting bright blue accents for a more dynamic and visually impactful overall aesthetic. 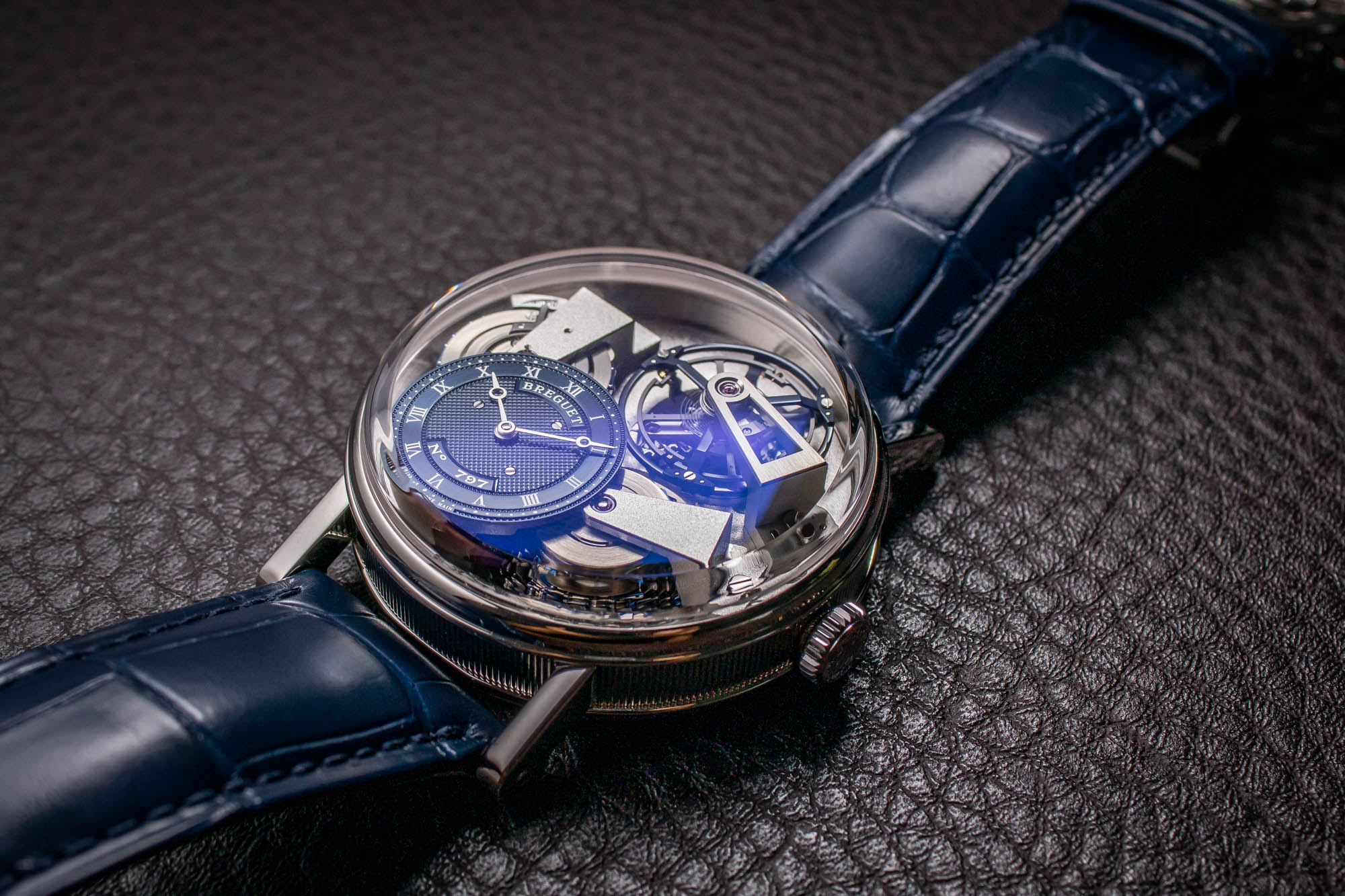 Although the Breguet Tradition 7047 Fusée-Chain Tourbillon isn’t a skeletonized watch, it does prominently showcase a number of its internal mechanisms, and while it does have a dial in the traditional sense of the word, it represents just one visual element sitting under the heavily domed crystal, and only accounts for about a quarter of the overall available space. The blue dial, which is crafted from a sheet of solid gold and sits at the 8 o’clock location, is adorned with a guilloché pattern and completed by Roman numeral hour markers along with a pair of Breguet-style hands for displaying the hours and minutes. To the left of the dial is the barrel that supplies the power for the movement, while occupying the space to its right is the chain-fusée mechanism, and the coiled chain itself has been given a blue finish to compliment the overall color profile of the watch. Sitting opposite the dial at the 2 o’clock location is an enormous one-minute tourbillon sitting inside a matching blue cage, and the tourbillon itself happens to be invented by Abraham-Louis Breguet, making it a particularly appropriate complication to be featured in a Breguet timepiece. At the heart of the tourbillon mechanism is a large titanium balance wheel with a silicon balance spring, although aside from these specific components, the rest of the movement remains largely hidden from view on the dial side of the watch behind frosted rhodium-plated bridges. The contrast created by the bright white metal and deep metallic blue accents ultimately offers noticeably more visual impact than the monochromatic gray appearance of the other platinum Tradition 7047 model, and it helps draw attention to both the tourbillon and chain-fusée mechanism, which are the true party pieces of this particular watch, both from an aesthetic and functional standpoint. 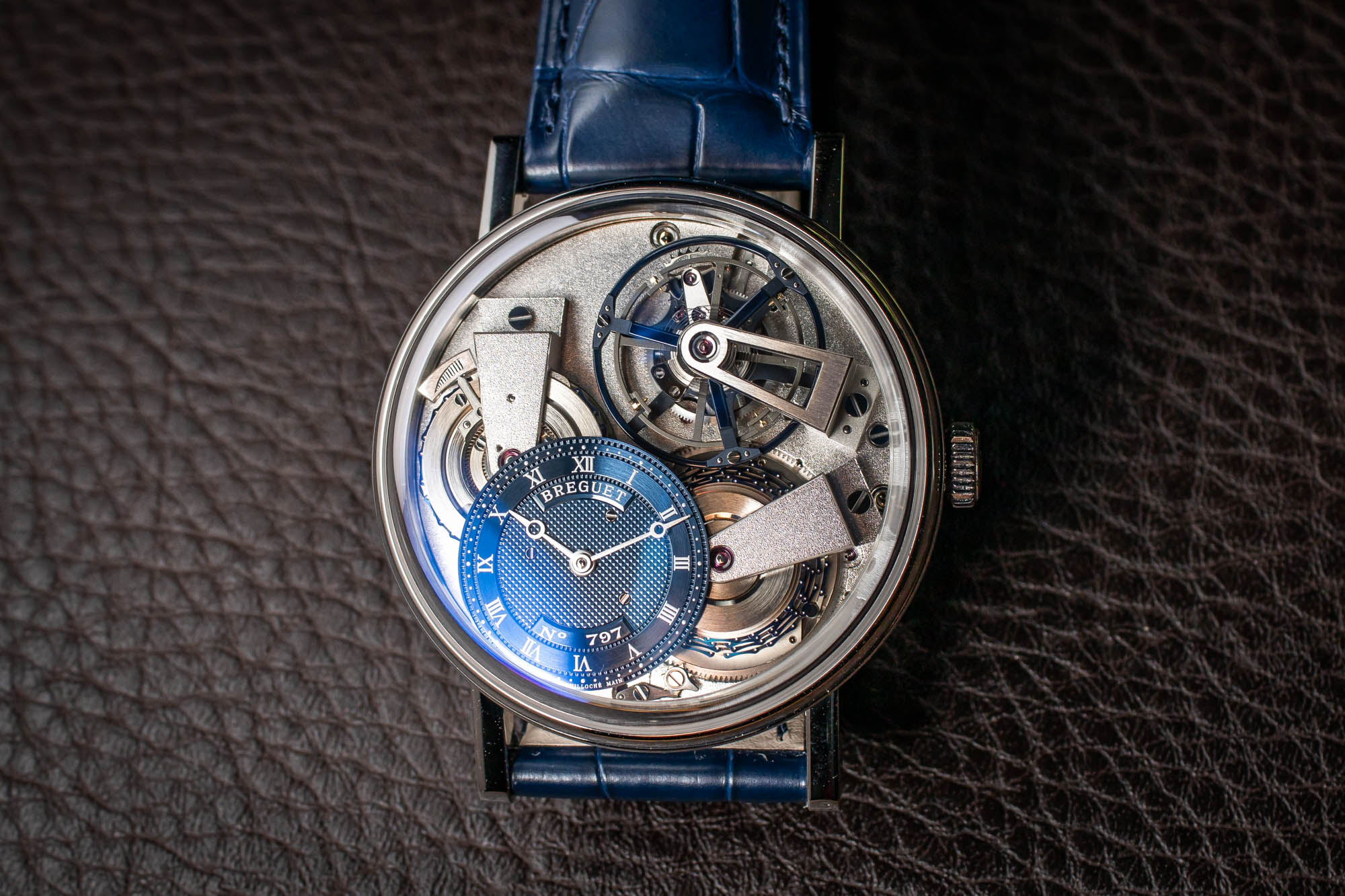 Unlike many timepieces that have their movements hidden away behind a dial and caseback, the Breguet Tradition 7047 Fusée-Chain Tourbillon really incorporates the design of its movement into its appearance, and the manual-wind Breguet Caliber 569 is fully visible through both the front and back of the watch. Consisting of 43 jewels and 542 individual components, the Cal. 569 runs at a frequency of 18,000vph (2.5 Hz) and offers users a power reserve of approximately 50 hours. While a tourbillon and a chain-fusée mechanism are two of the more visually impactful complications that exist within watchmaking, I do wish that the movement itself featured more elaborate decorations. The frosted bridges have neatly beveled edges and are incredibly well done in terms of their actual execution. However, they are almost too clean and simple for the rather extravagant style of the watch, and I would have personally enjoyed seeing some of the more traditional and elaborate finishing techniques that Breguet does incredibly well on many of its other tourbillon-equipped models. While there is a case to be made that the frosted surfaces on the dial side of the watch help keep the attention on its party-piece complications, I still would have preferred to see Breguet adorn the reverse side of the movement with more intricate decorations, rather than entirely adhering to a tidy yet minimalist appearance on what is ultimately a very complicated, heavy-hitter movement. 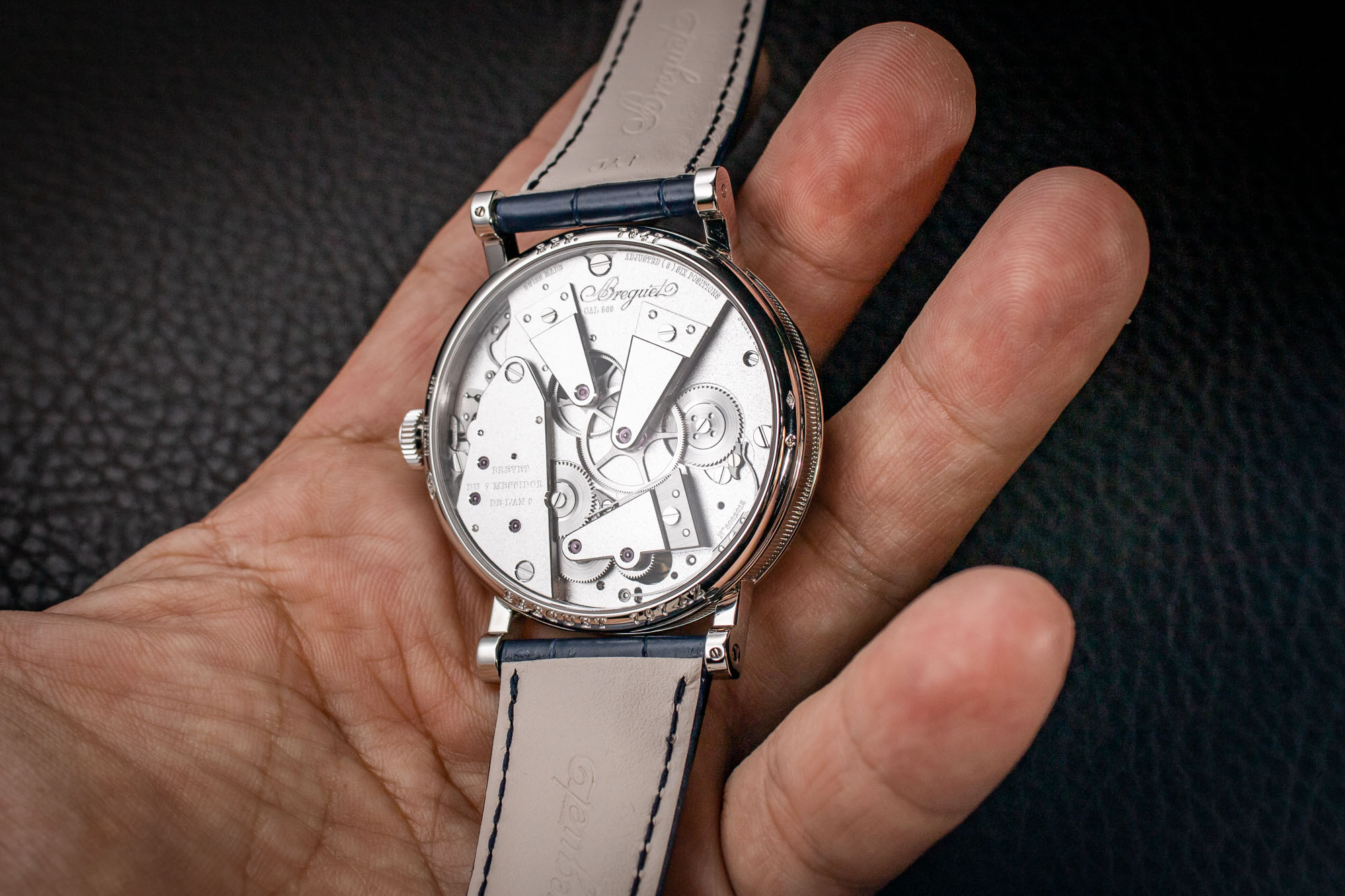 Completing the latest edition of the Breguet Tradition 7047 Fusée-Chain Tourbillon is a blue two-piece alligator leather strap. The strap itself features a decent amount of padding in its construction to help support the weight of the watch, while the specific shade of midnight blue used for the material itself compliments the color of the dial and the small accents seen throughout the movement. The strap connects to the case with screwed pins rather than springbars, while the two opposite ends of the strap are joined by a matching platinum deployant clasp. This type of classically styled case begs for a dressy leather strap, and virtually every single model from the greater Tradition collection is ultimately fitted with something fairly similar. All things considered, the strap offers a very standard and straightforward design, although due to the fact that the other versions of the Breguet Tradition ref. 7047 are all fitted with either black or brown leather straps, the simple use of a blue-colored alternative ultimately results in a significantly more modern overall appearance. 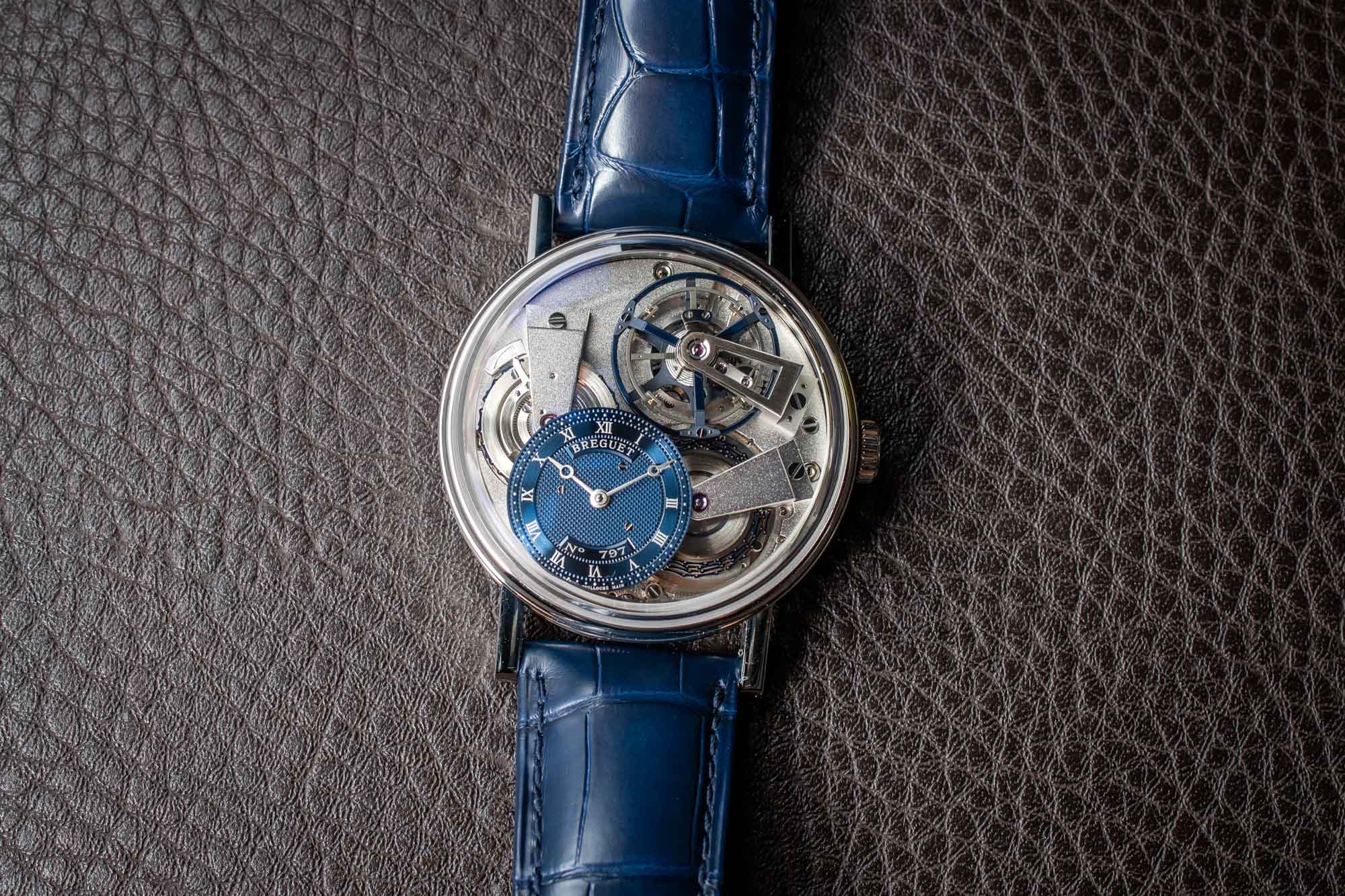 Breguet is a serious luxury watchmaker and the brand operates at a price point where even a simple three-handed model will cost you at least five figures. Additionally, once you start talking about including complications such as a tourbillon and a chain-fusée transmission system, you can virtually guarantee that you will have a rather expensive offering on your hands, and the latest rendition of the Breguet Tradition 7047 Fusée-Chain Tourbillon has an official retail price of $189,700 USD. It’s undeniable that the watch both looks and feels impressive, although this should more-or-less be expected when you are dealing with a timepiece that costs as much as a modern supercar. Additionally, while this is easily my favorite version of the reference 7047 that Breguet has produced thus far, I still don’t think that it would be my top choice from the brand’s catalog when it comes to six-figure tourbillon watches, and this is largely due to the rather minimalist finishing on its movement. While I can certainly understand the intent behind the more pared-down design, I personally love when Breguet goes hard with its movement embellishments and giving the large flat surfaces a simple frosted finish just seem like a bit of a missed opportunity — especially on an ultra-exclusive platinum model fitted with both a tourbillon and a chain-fusée mechanism. That said, the platinum and blue version of the Breguet Tradition 7047 Fusée-Chain Tourbillon is still an absolutely beautiful timepiece, and it represents a highly complicated and technologically advanced solution to creating a classic time-only wristwatch. For more information, please visit the brand’s website.